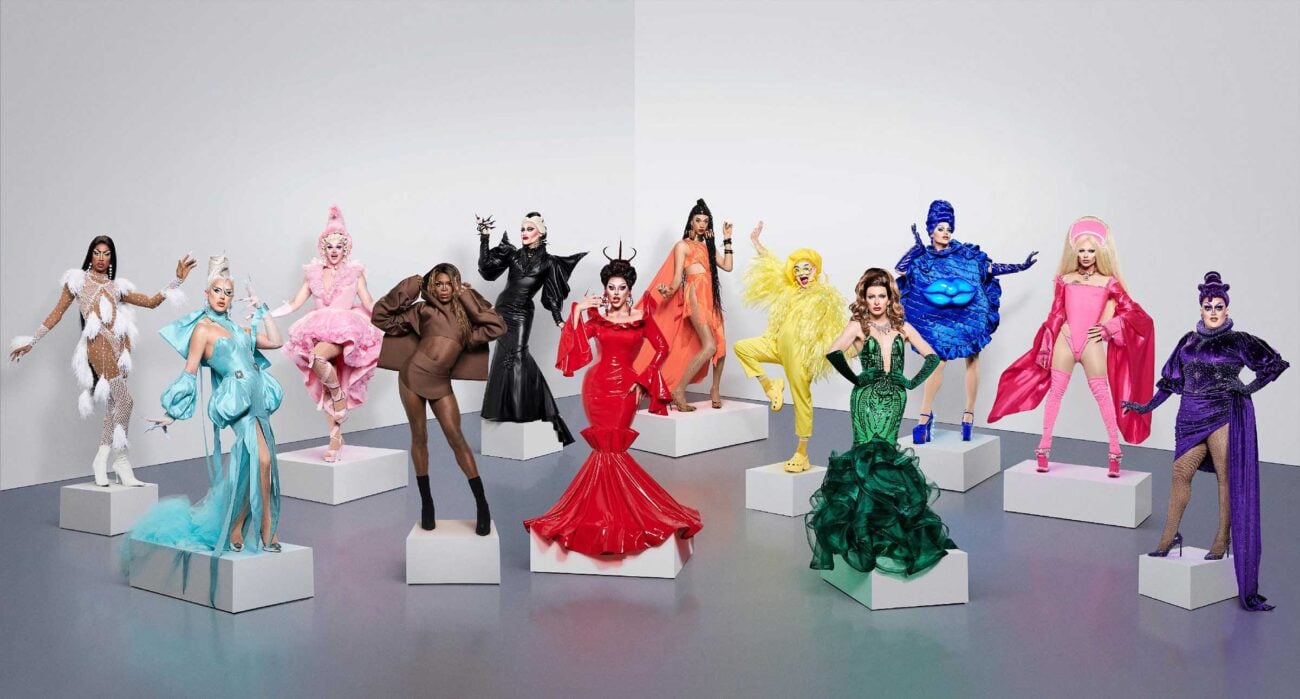 ‘Drag Race UK’: Hear from the queen who sashayed away in Ep. 2

The drama in the werkroom is just getting started. RuPaul’s Drag Race UK is only in week two, and once again, fans are upset over the shocking elimination after Rats: The Rusical. This season is definitely one for the record books.

After a not-so-strong performance as part of the Rat Pack, and then a less than stellar lip sync performance, we did have to say goodbye to Cherry Valentine. We’ll never forget the sad but beautiful story you told us in the werkroom about what being gay means to you. 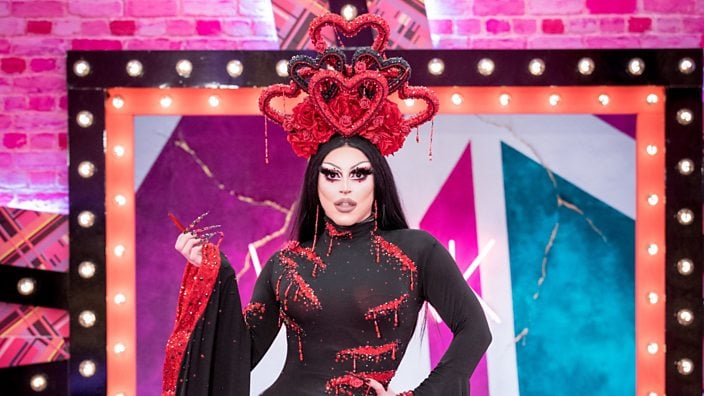 When the cameras roll, we can learn so much about our queens behind the scenes. While prepping for Rats, Cherry Valentine got extremely personal about his experiences growing up as a gay man, and what it means to be a man in the the first place.

“I did feel like that then, I did feel uncomfortable saying that I was gay. But now happily,I know who I am. And I’d happily say to anyone, like, I’m as queer as they come I really couldn’t care less anymore.” The werkroom is no stranger to tragic backstories, but it makes Cherry’s departure even more bittersweet. 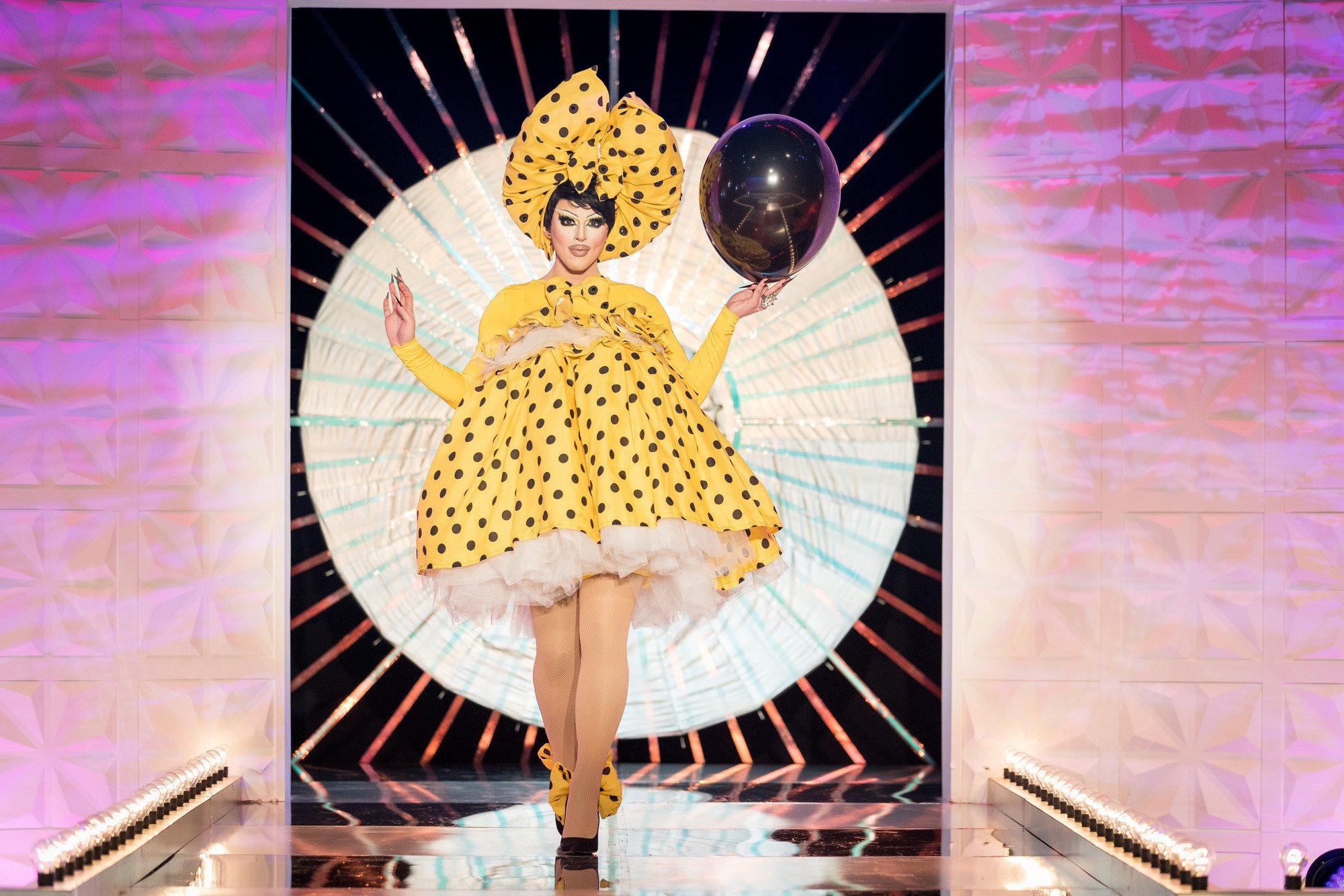 Revealing more than just a baby

While this season’s Rusical was definitely the highlight, we can’t ignore the revealing runway challenge of a great reveal. Cherry chose to channel everyone’s favorite thing to hate: gender reveal parties.

“I mean, it was one of them things like I have so many ideas. When I sit down and listen to a concept, I always have so many ideas about it. After so many reveals in our performances, I’ve done work wig reveals, I’ve done flips into different outfits, I’ve done twirls, it’s been like I’ve done it.” Sadly, the look wasn’t enough to save Cherry from the lip sync, and found herself sashaying away.

You can read our full interview with Cherry below.

I would say it was probably the women in my family because they act so fabulous. And like I said, on the show, they really do wear heels to go around to the corner shop. Like, that’s not even an exaggeration. I just, I look over this whole drama, big hair, nails, the whole package. So that’s sort of where it stems from, and like, planted the seed in my mind.

But then as you grow older, I think you discover new things and you discover that you can be a little more yourself. So then it just sort of went from there. And then obviously, I discovered the drag scene. And then I was like, “people make money from doing this? Can you get me involved?” Yeah, that’s where I came from. 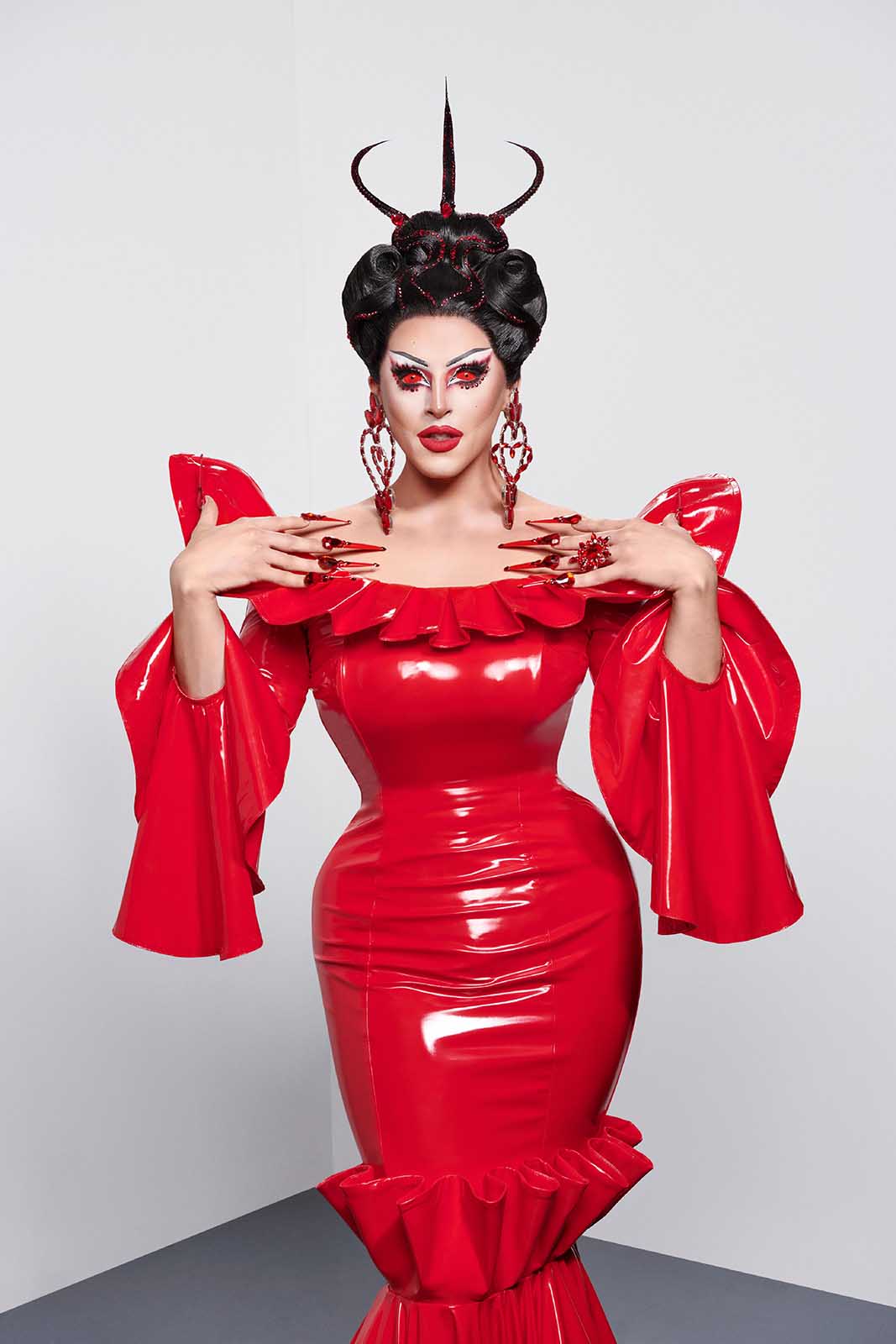 What made you want to audition for Drag Race UK in the first place? What was your reaction when you were chosen?

Honestly, I didn’t think that I would be picked. I did it for the experience. I thought “I’ve been doing drag for about a year now. I’ve performed, and hosted shows, I’ve done all that.” But it’s not something that I know everything about.

I feel like I would need to learn more. But it would be nice to see what the whole experience of applying for Drag Race would be. Because obviously it’s a dream. A person who loves the show that want to get on so passionate about what they do. So I applied, I did the test. And then before you know it, I got the call. And I honestly thought they were, they were like joking. I answered the phone.

I was like, “Are you kidding me? Are you being serious?” But it turns out they were. And then before I knew it, I was on the show. And it was just a whole different world. So it was a whirlwind. It’s really made me grow as a person. And it’s really made me well. It’s helped me define who I am as an artist as well.

What did you take away from your experience on Drag Race UK?

And that was definitely one of the lessons that I learned from that experience. And when I was stood in front of RuPaul, and I said you’ve lit a fire under my ass, I really did mean that because everything I’ve done since I just want it to be so much more elevated and so much more polished, who I am as a person and as an artist. But it’s definitely changed my whole outlook on a lot of things. And I think honestly some things that I needed to go through. 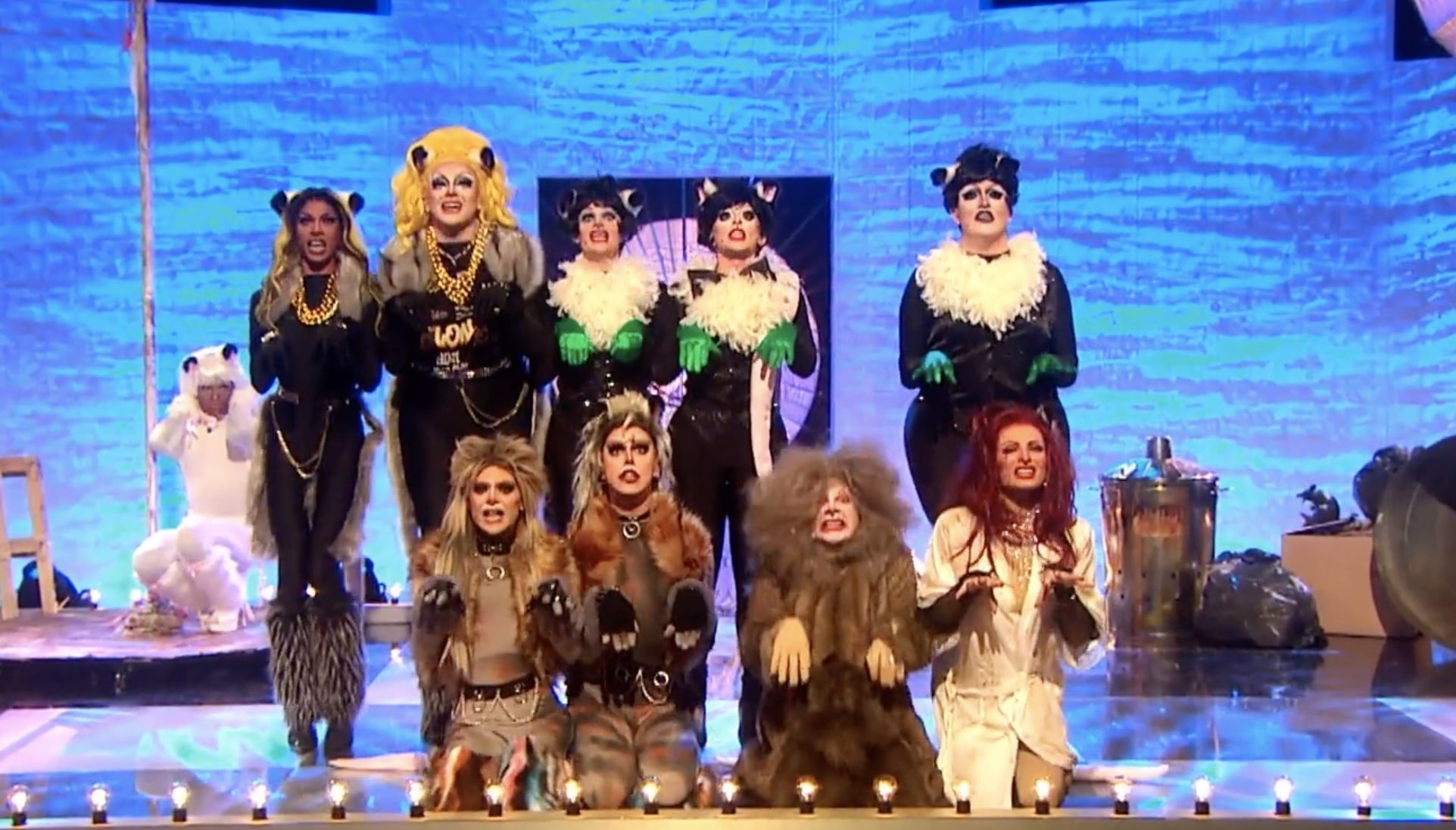 Focusing on this week’s episode, what was your reaction when you found out you had to do Rats with live vocals?

In my head, I was like you “I swear to god RuPaul you do not want to hear me sing live.” But it was one of the moments that was like, “This is part of the show. It’s like you knew this was coming you knew you will have to sing at some point. So just do your best.” But I absolutely adored doing Rats, and I think everyone did a really fantastic job with the parts that were given.

You get really personal talking about your sexuality, and how it’s uncomfortable for you to admit you’re a gay man. Did you mean what you said in that moment?

Yeah. To be, quite honestly, I did. I really did feel like that in that moment. And I felt like that for a long, long time. And it wasn’t until I went on Drag Race, and I went through the pandemic that I really appreciated myself as a person and started to accept who I am as a person.

Because I did my gender reveal about a weird thing like gender, like it’s so diverse and it’s so colorful, and that I never really felt like I was put into a box. I never really felt comfortable putting myself into a box. And I think it was really telling for me and myself to go through that experience and realize like, “That’s okay, you don’t have to be in a box, you can make your own box, who cares?”

I did feel like that then, I did feel uncomfortable saying that I was gay. But now happily,I know who I am. And I’d happily say to anyone, like, I’m as queer as they come I really couldn’t care less anymore.

Your runway look this week was themed around a gender reveal party. Why did you choose that for your look?

But I wanted to do something really different because I thought that everyone else will be doing predictable things. And I thought of it the day before that part of the competition. I didn’t even get a chance to practice it. For the first time I did it was on the runway. 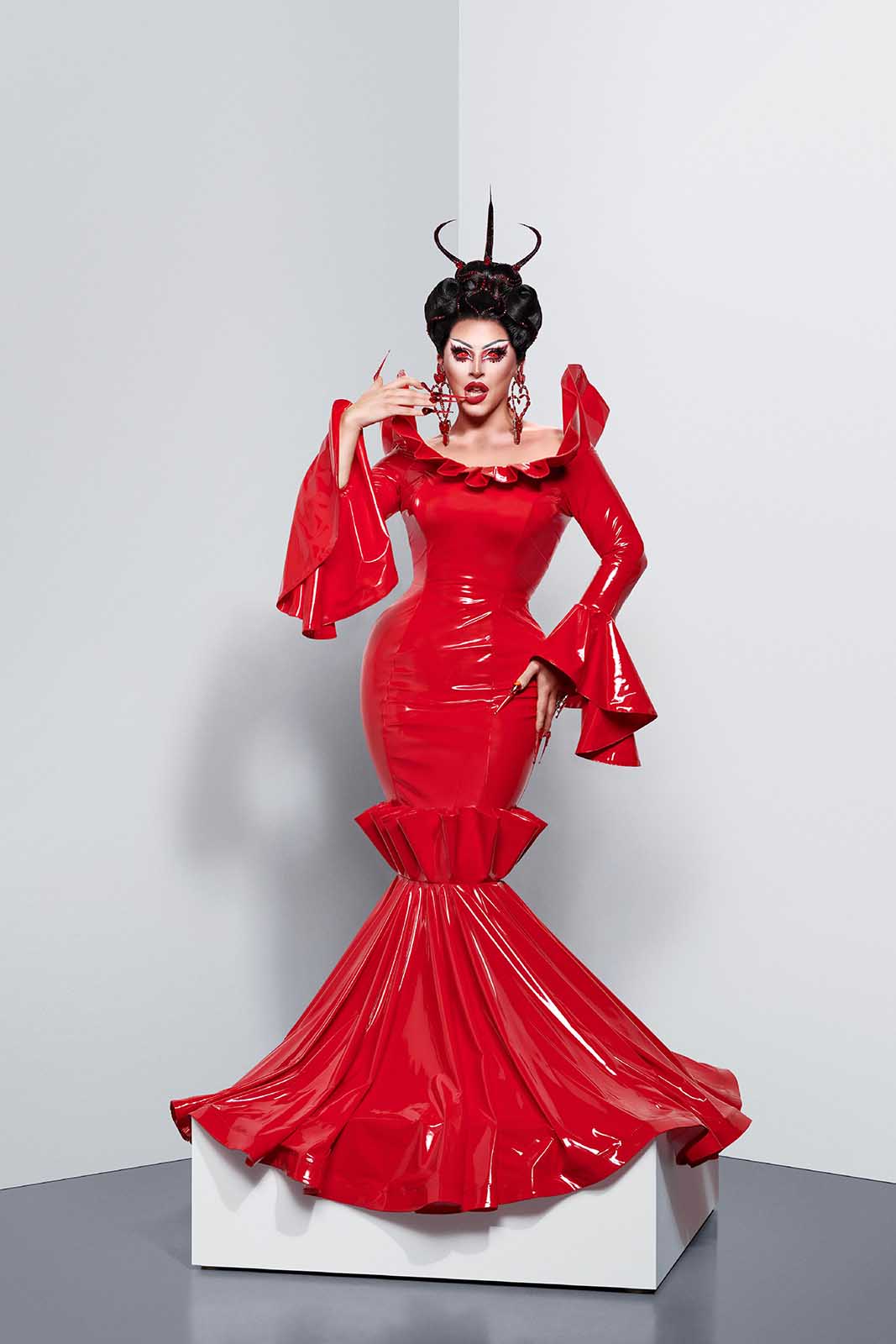 People are just as mad about your elimination online as Joe Black’s last week. Do you have any regrets about being eliminated?

Of course, I have regret. I mean, it’s not really my regret to bear because it wasn’t my decision. And I really truly believe that if I wasn’t eliminated, I would have gone really far in the competition because the things that I brought and the things that I just offer around this world, like I can say that humbly.

But I’ll still obviously post everything that I was going to wear and things like that. But I think it’s different when you’re actually on the runway showcasing it. But I’m really proud of everything I did and I don’t think I did a bad job. So it is what it is, as I said before we ride the waves and deal with what has been given.

Where can fans find you next?

Yeah, I mean, people who support my work could find me literally anywhere. I keep saying this, but it’s so true. I literally want to try everything. I want to do everything and see what I like the best. Like as a creative, I think it’s really important that we branch out and we try new things all the time.

RuPaul’s Drag Race UK airs Thursdays in the UK on BBC Three and in the US & select territories on WOWPresents Plus.