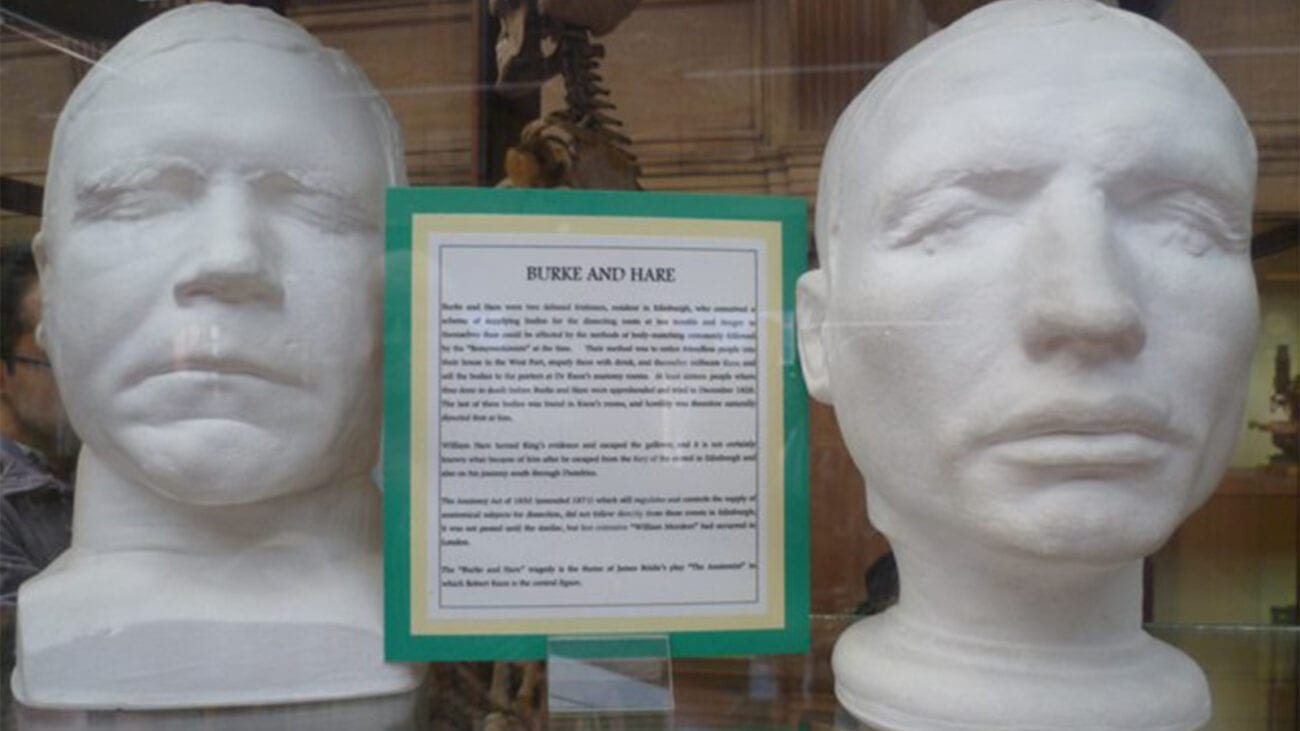 There is no crime more morbid than grave robbing. Grave robbing or tomb raiding is the act of digging up a grave, tomb, or crypt to steal whatever was buried with the body. No, we aren’t talking about Lara Croft or Indiana Jones’s adventures. The difference between grave robbing & archaeology is tomb raiding is for stealing artifacts to sell.

One grave robber in the nineteenth century took grave robbing to a whole new level. William Burke was an Irish grave robber, but he never touched a shovel. What’s the history behind one of the British Isles’ most notorious grave robbers? 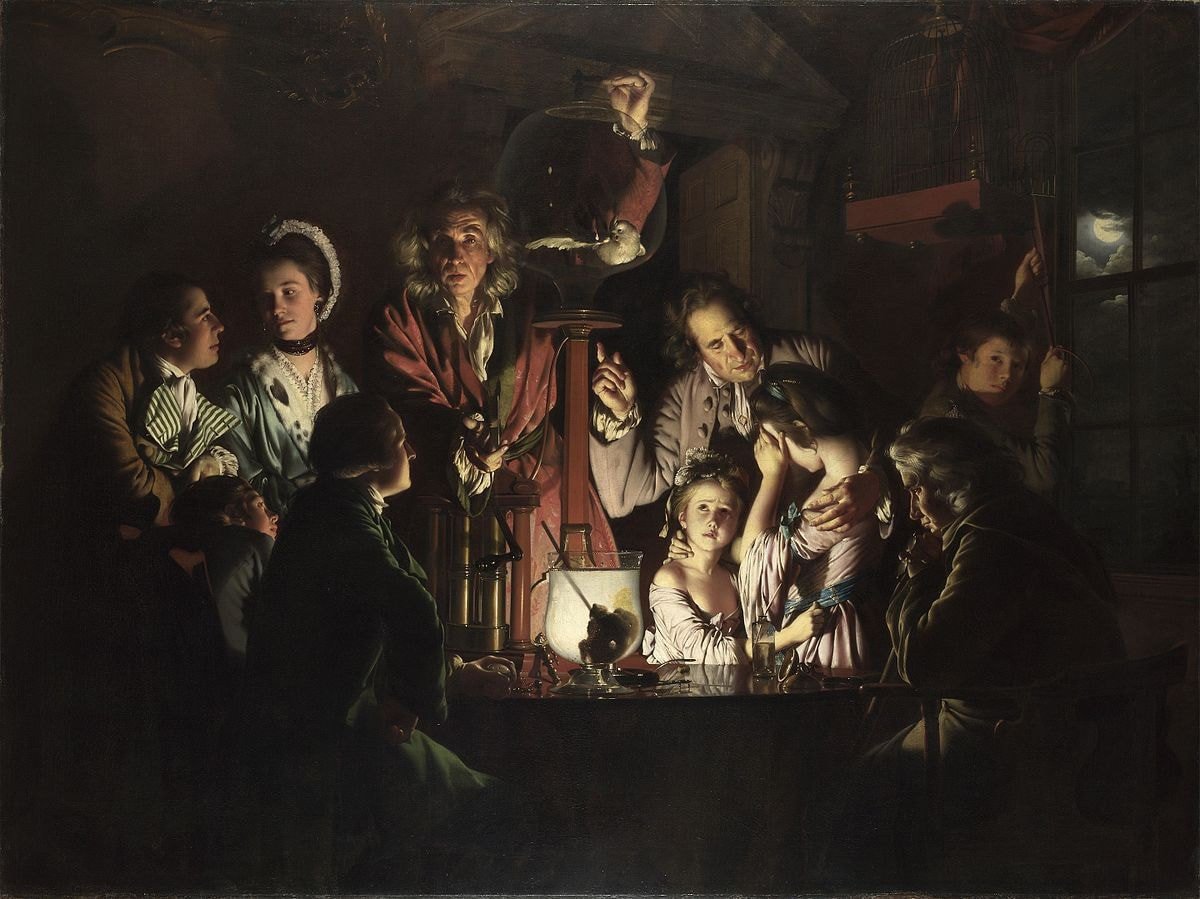 Grave robbing in the late 1820s

In 1823 Britain enacted the Judgment of Death Act, which limited the number of crimes punishable by death. It was good in theory but executed criminals’ bodies were donated to medical & anatomical schools. It was a great relationship, but since fewer criminals were being executed, medical schools’ cadaver supplies went dry much faster.

The schools resorted to paying people to donate loved one’s bodies for science. Granted, they didn’t ask people about their relationship with the body, so some took advantage of a new revenue stream.

Most grave robbers turned to rob fresh graves for the body to sell, but William Burke took it to a whole new level. He would lure the poor to his boardinghouse and murder them to sell them to a local medical school for seven pounds & ten shillings. 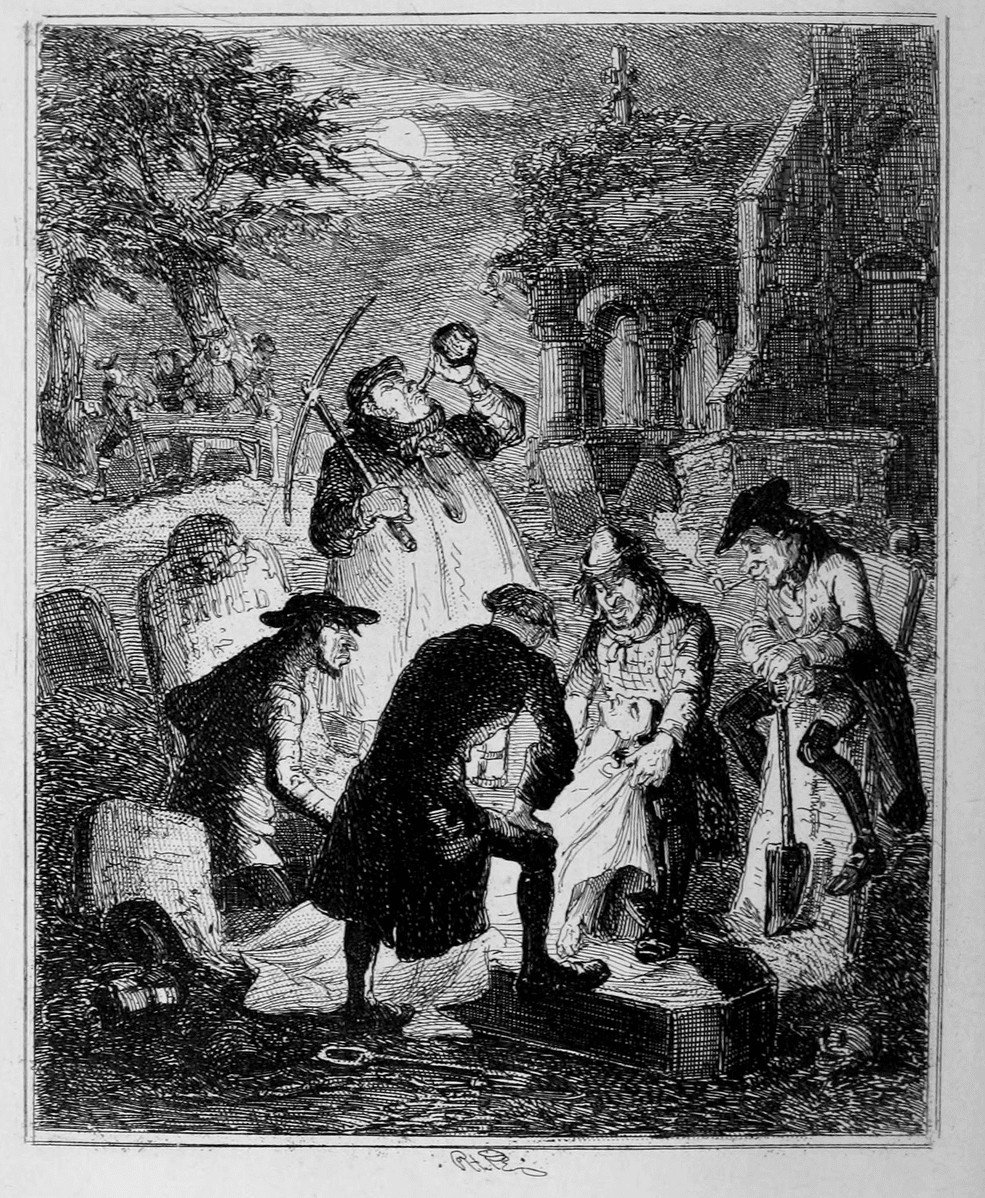 William Burke originally owned a boardinghouse with his partner William Hare, Hare’s girlfriend Margaret Hare, and his mistress Helen McDougal. The boardinghouse had an elderly tenant, named Old Donald, who became ill and died before paying off his debt. He still owned Burke & Hare four pounds before his death. To cover his debt, the two sold his body to Professor Robert Knox of Edinburgh University medical school.

Following Donald, another tenant named Joseph became ill. Burke & Hare were afraid he would recover and finished the job by filling him up with whiskey and suffocating him. This became their favorite way to murder their victims.

The two realized how easy it was to turn a quick buck and devised a plan to lure the poor to the boardinghouse and kill them to sell their bodies. The poor were their easiest targets because people wouldn’t ask questions or miss them. In a more gruesome murder, the pair overdosed a grandmother with painkillers and killed her blind grandson by snapping his spine over Hare’s knee. 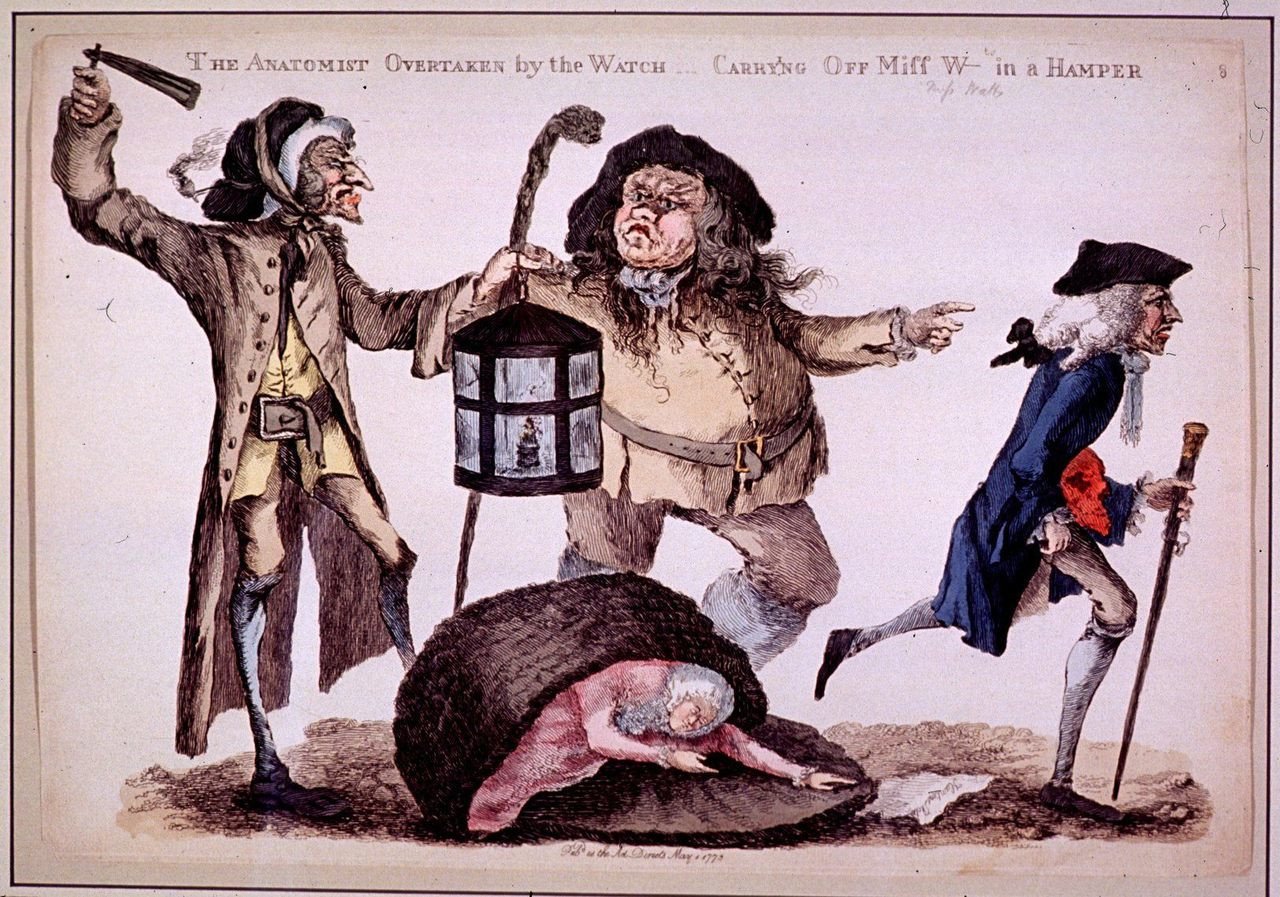 William Burke & William Hare preyed on anyone they could find. Burke & Hare killed a local prostitute while she and a friend both stayed at the boardinghouse. Her friend Janet Brown managed to escape without uncovering their plan, oblivious to what happened to her friend. Many of Knox’s students recognized the prostitutes the pair murdered but didn’t say anything.

The two became so greedy they began to slip beyond murdering recognizable prostitutes. On Halloween, the two had a couple named James & Ann Gray and an additional guest Marjory Campbell Docherty, allegedly a distant relative of Burke’s mother. The two killed Docherty and told the Gray’s she had flirted with Burke and asked to leave. 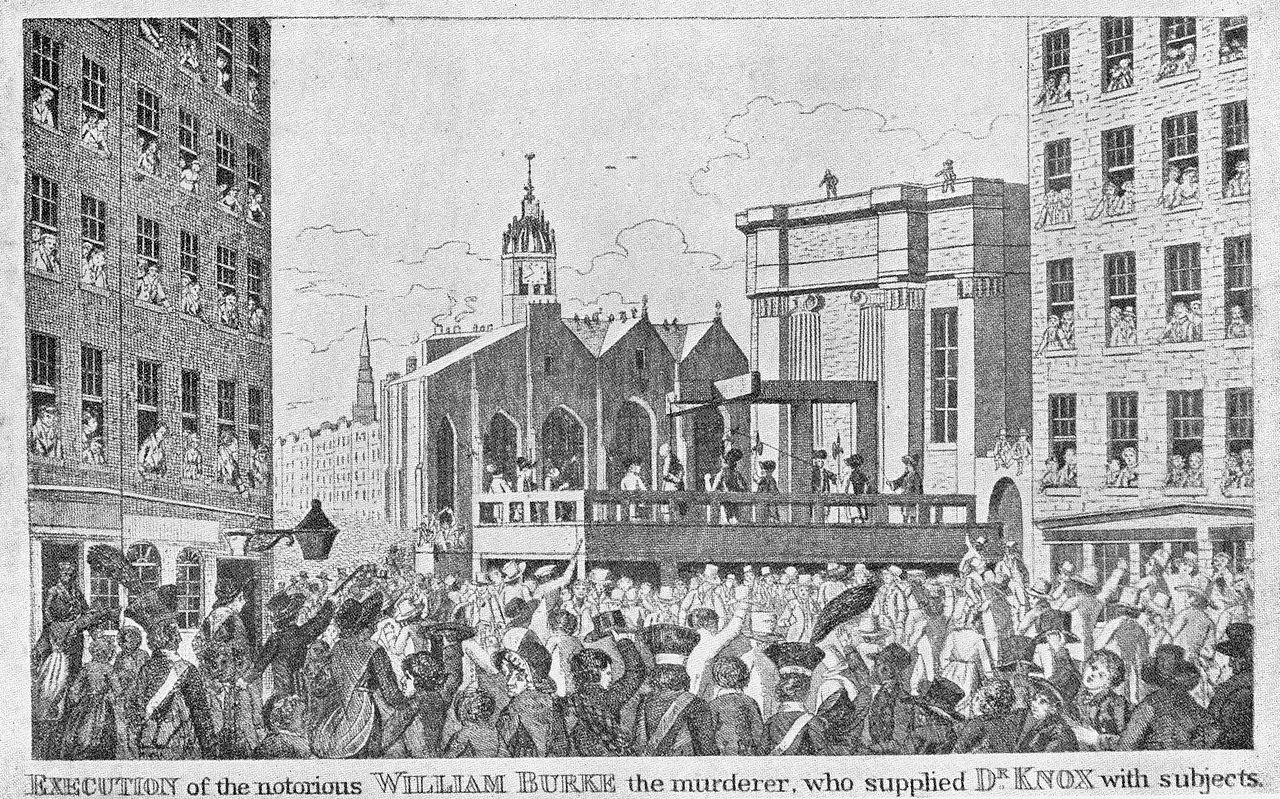 Everything was fine, except they stored her body in a room where the Gray’s stored some belongings. The Gray’s became suspicious when they weren’t allowed in. When they were left alone, they sneaked into the room and found her body under the bed. The couple alerted Helen, Hare’s mistress, and she offered a ten pound a week bribe for their silence. The Grays refused and went straight to the police.

Word got to Burke & Hare, and they sold the body to Knox before the police arrived at the boardinghouse. All four of them were shortly arrested. 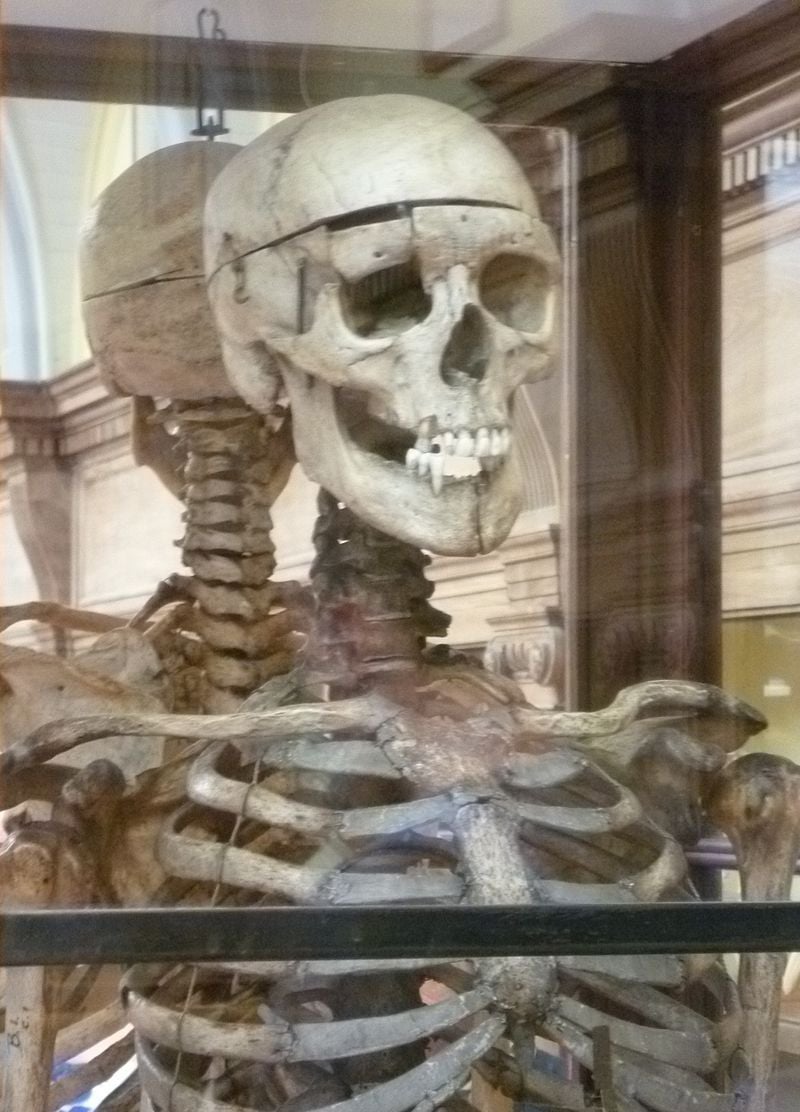 William Hare was offered immunity to testify against William Burke & Helen McDougal. Burke was convicted of the murders and sentenced to hanging. His body was donated to medical science, and some of the students kept souvenirs of his skin.

McDougal was held complicit in the murders but was found not proven & set free. She later emigrated to Australia. Margaret also emigrated from the UK to Ireland. Despite gaining immunity, Hare didn’t leave the murders unscathed. Hare went to Britain, and no one knows for sure what happened to him, but it’s rumored a mob threw him into a lime quarry, and he lived out his life as a blind beggar in London.

Following the murders, the UK enacted the Anatomy Act in 1832. The act allowed doctors, anatomy lecturers, and medical students greater access to cadavers and the legal donations of bodies. It effectively ended grave robbing to sell the bodies for science.