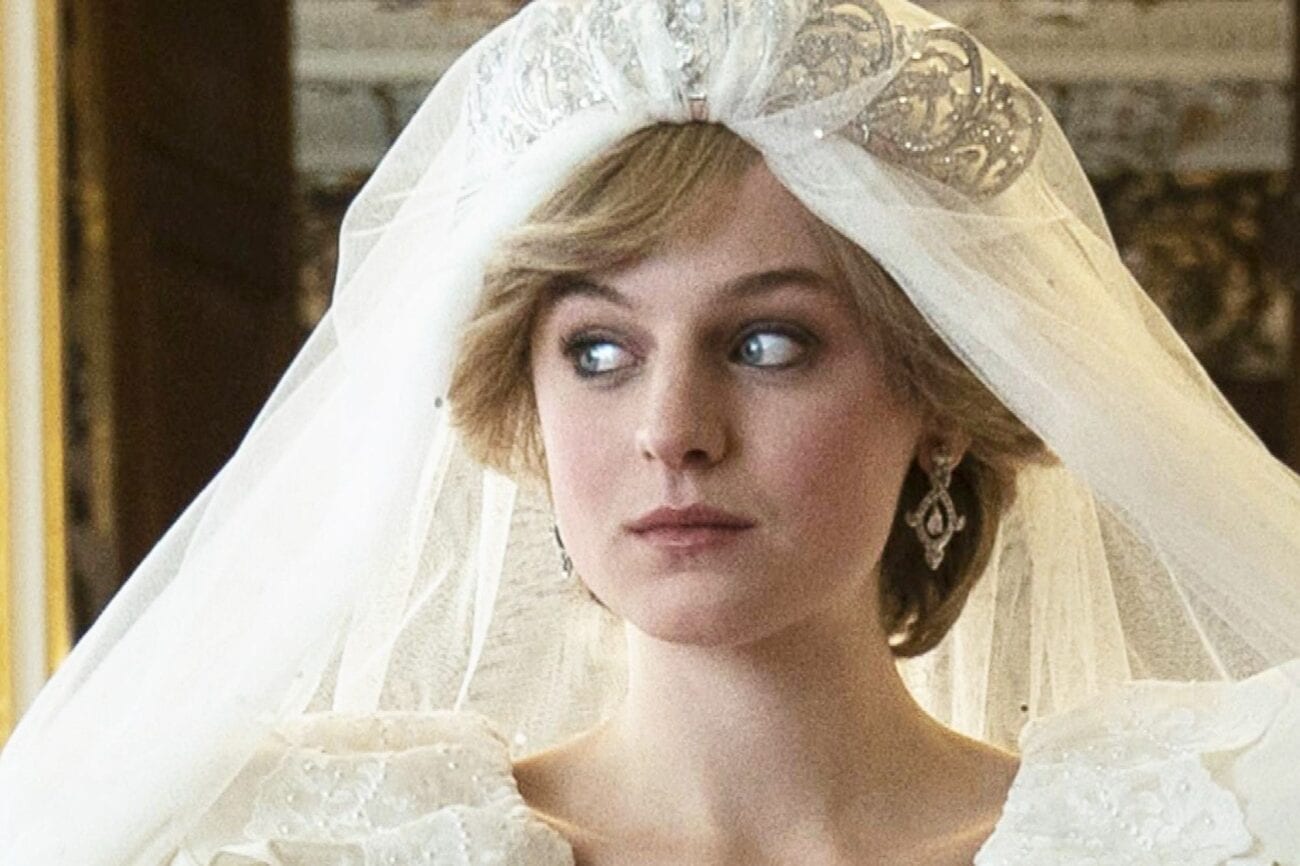 Princess Diana to the queen: All the best outfits in ‘The Crown’ season 4

Princess Diana was one of the most iconic British figures of the twentieth century. She dominated the royal conversation during the 80s & 90s, and many of her outfits would go on to become fashion staples. Diana has been added as a character on season 4 of The Crown, and the show has gone to great lengths to recreate this seminal style.

We decided to breakdown some of Princess Diana’s best outfits from The Crown season 4, and how her fashion choices reflected her transformation from average girl to royal family member. 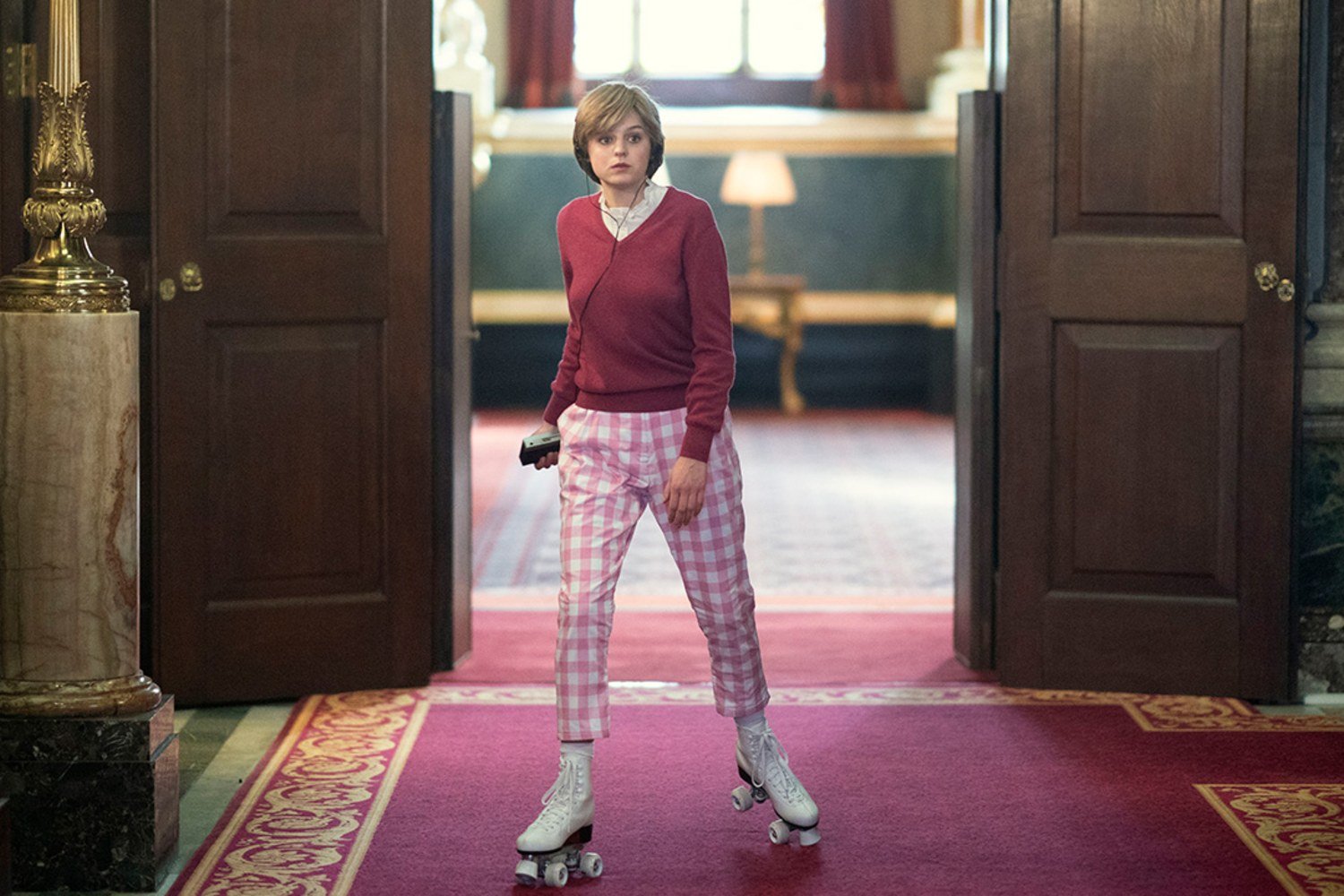 One of the earliest scenes involving Diana (Emma Corrin) is the sequences where she roller skates through Buckingham Palace. The scene is meant to take place in 1981, and Diana’s bright sweater & checkered slacks place her firmly at odds with the royal setting. So does the Walkman, which blasts Duran Duran’s “Girls on Film”. It’s a big moment for the show, and one in which Diana’s fashion achieves more than retro flair.

The show’s production designer, Martin Childs, told the New York Post that the scene was meant to evoke the intimidation Diana felt as she joined the royal family. “It shows her trying to find some liberty in a place where she had no freedom,” Childs stated. The designer likened the scene to Alfred Hitchcock’s classic Rebecca, which also featured a woman who struggled with the lineage of her husband. 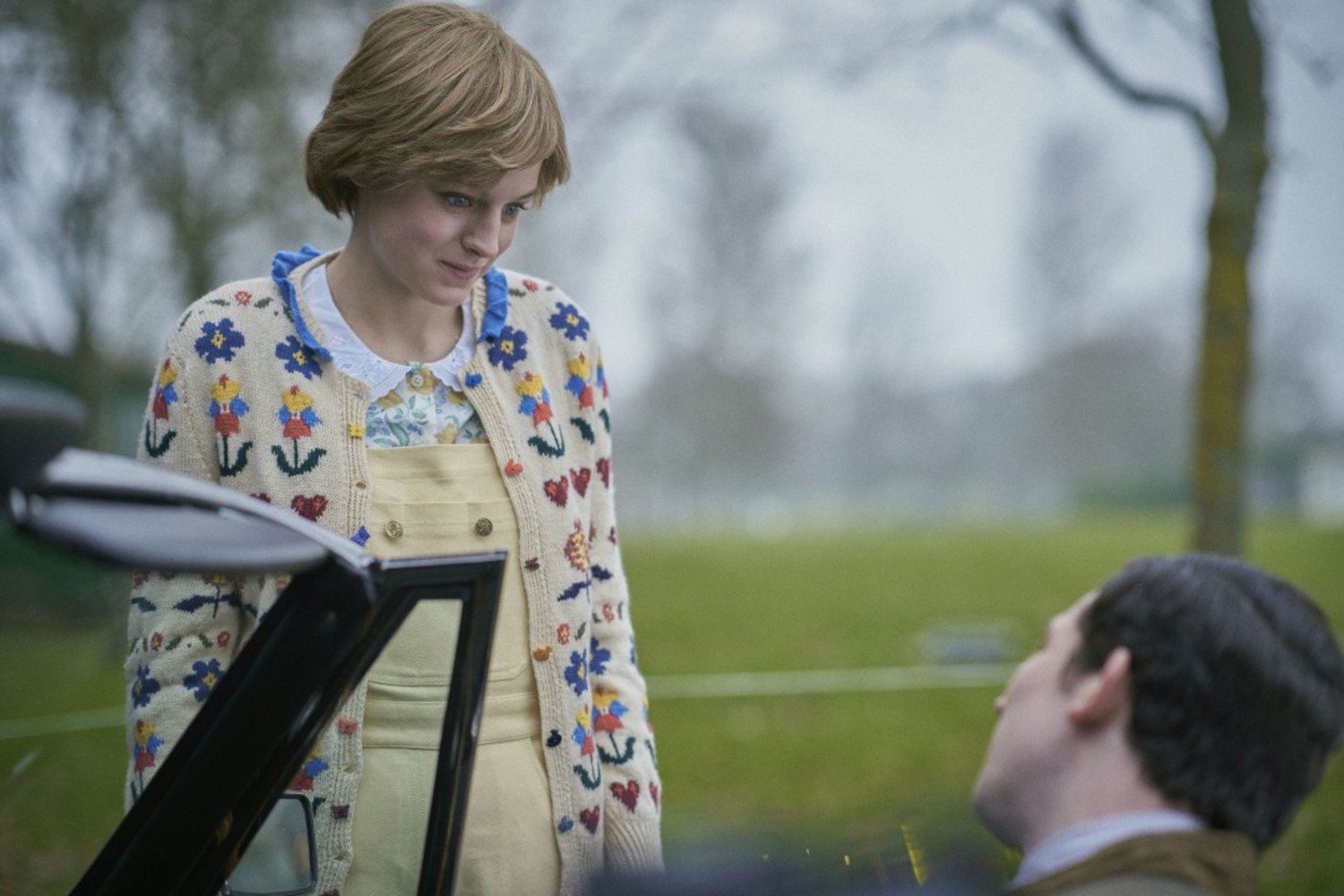 Diana’s bright clothing is meant to contrast with the slick formality of Prince Charles and the rest of the royal family. One of the most notable looks she has sported so far is the yellow overalls with a patterned sweater. It sticks out next to the muted woodland scenery, and makes the character’s presence all the more appealing.

The Crown season 4 costume designer Amy Roberts told the Post that she liked the transformative aspects of Diana’s fashion. “We started with Diana as a young, casual, not particularly stylish girl, dressing her in scuffed flat shoes, bobbly jumpers, casual shirts and jackets,” Roberts stated. “Then she moves to the palace where her look becomes more manufactured.” 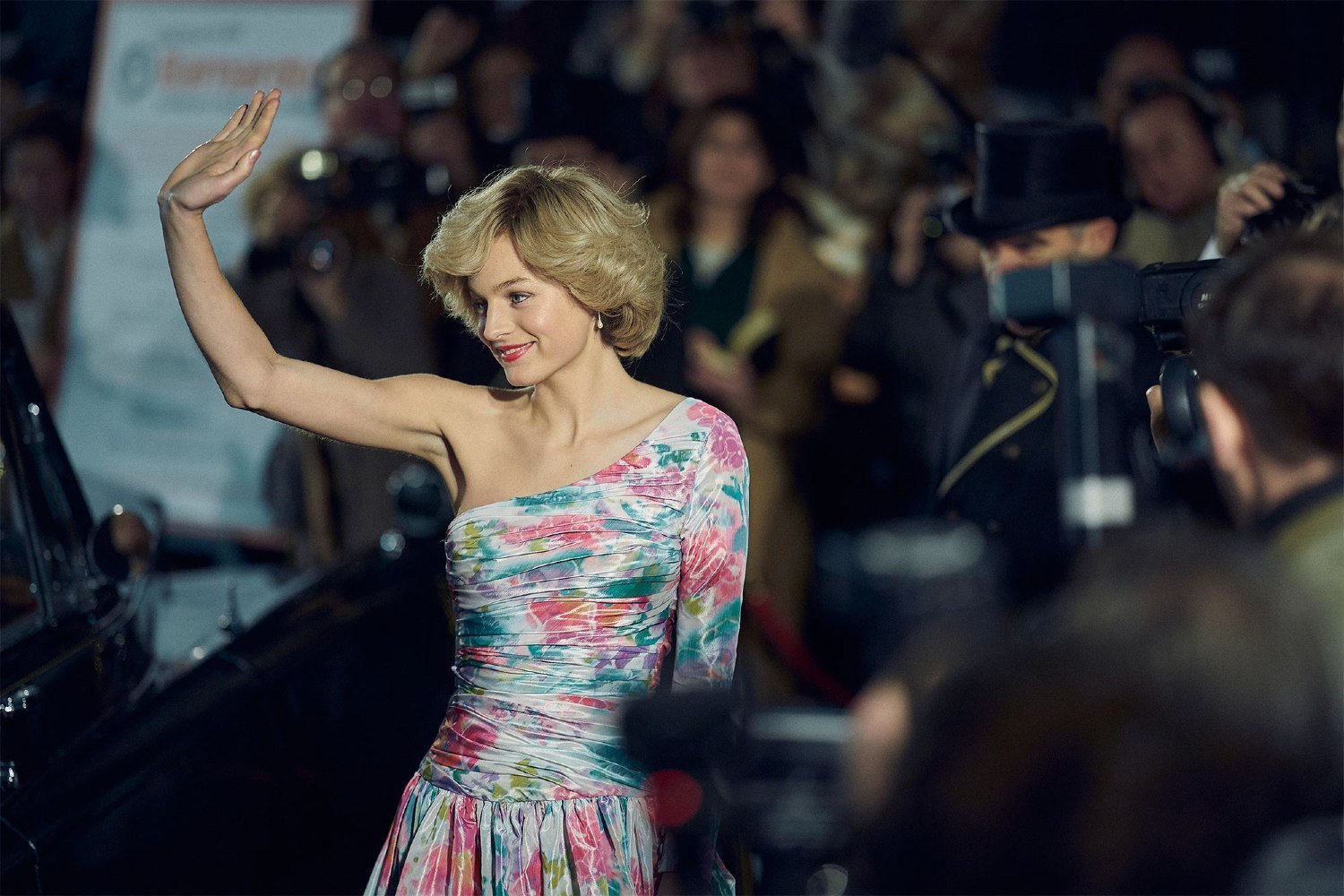 The dresses that Diana chose to wear at public events is the best indicator of this transformation. She initially wears spaghetti-strap dresses and bright colors, but the more she falls prey to the scrutiny of the media, the more she refined her clothing. Roberts felt that Diana’s earlier dresses exposed a “child-like frailty”, whereas the later dresses showcase an “armored look” that served as metaphorical protection.

“[We] created a more powerful, ‘armored’ look to illustrate her growing realization she would need to fight to survive,” Roberts stated. “All these more tailored looks made in bolder block colors in wools and crepes were made in our workroom.” 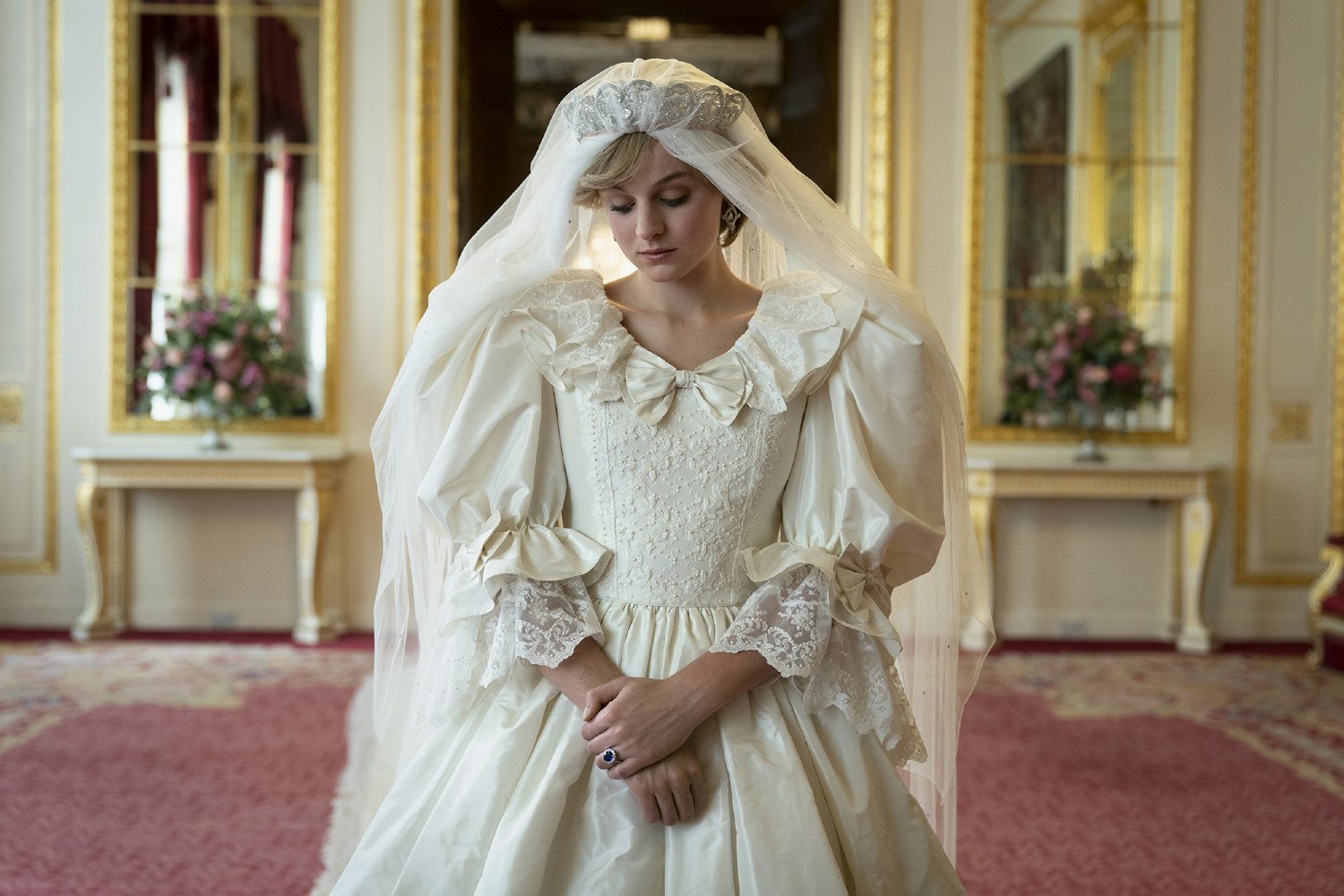 Diana’s wedding dress is the most iconic outfit to appear in The Crown season 4. The costume team had a hard time recreating the dress, because they couldn’t determine its exact color. “It was quite difficult to gauge the color choice as, in every image of that dress, the color changes,” Roberts recalled. The team were forced to reach out to veteran designer David Emanuel, who created the original dress with his wife Elizabeth.

Roberts and her team needed 310 feet of fabric and 330 feet of lace to properly recreate the wedding dress. They went as far as to have the lace trim made by the same English company who manufactured the real thing in 1981. The end product was stunning. 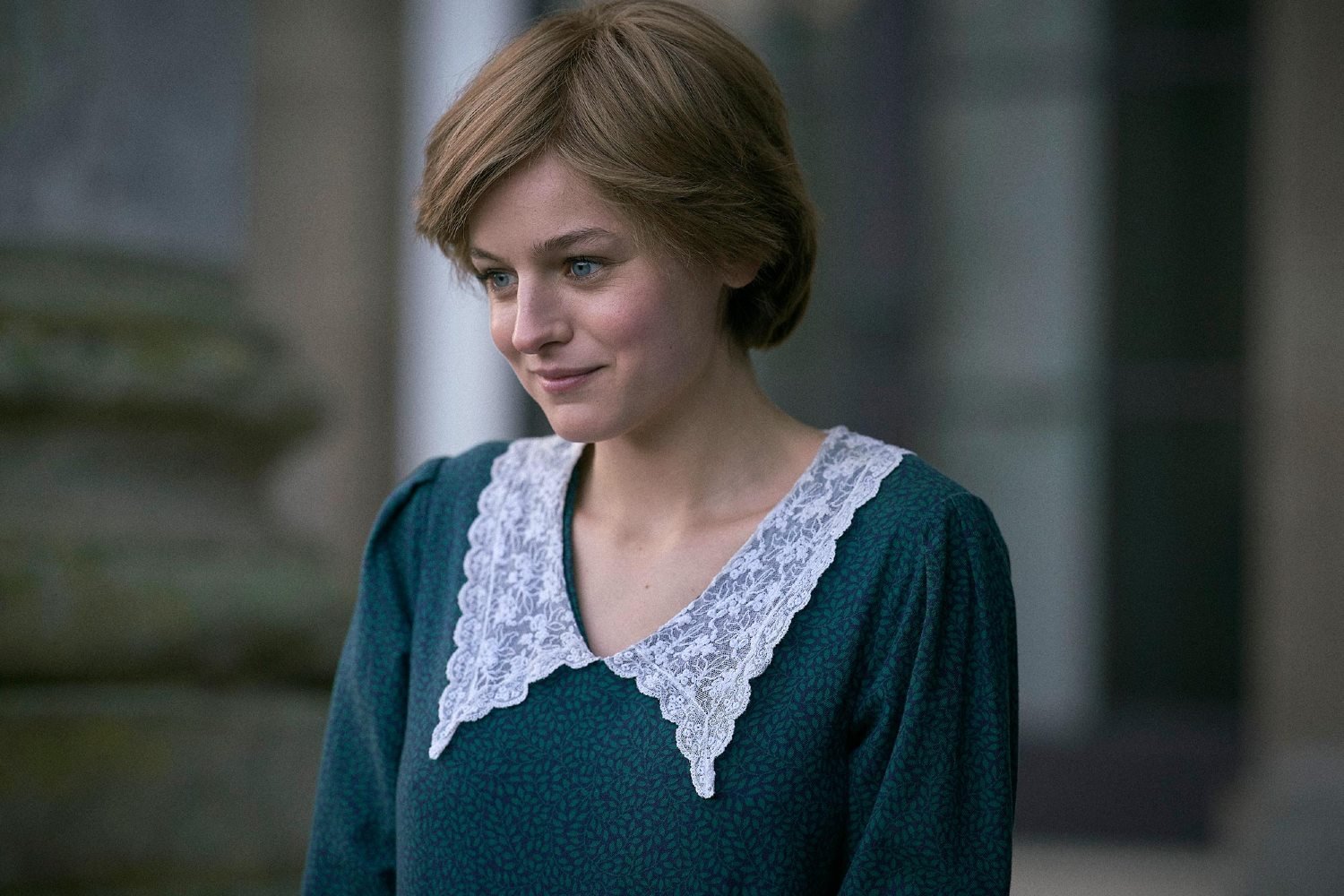 Some fans were disappointed to realize that Diana’s wedding was not recreated with the same level of detail. The character is shown attending a dress rehearsal, but the wedding itself is not shown in the episode. Emma Corrin told The Hollywood Reporter this was an intentional choice on the part of The Crown writers.

“It has to be part of the story. It has to further the plot, basically,” she stated. “The wedding scene, you can YouTube it and you could be watching it in 10 seconds, so I don’t think there’d be any point in us recreating it.”