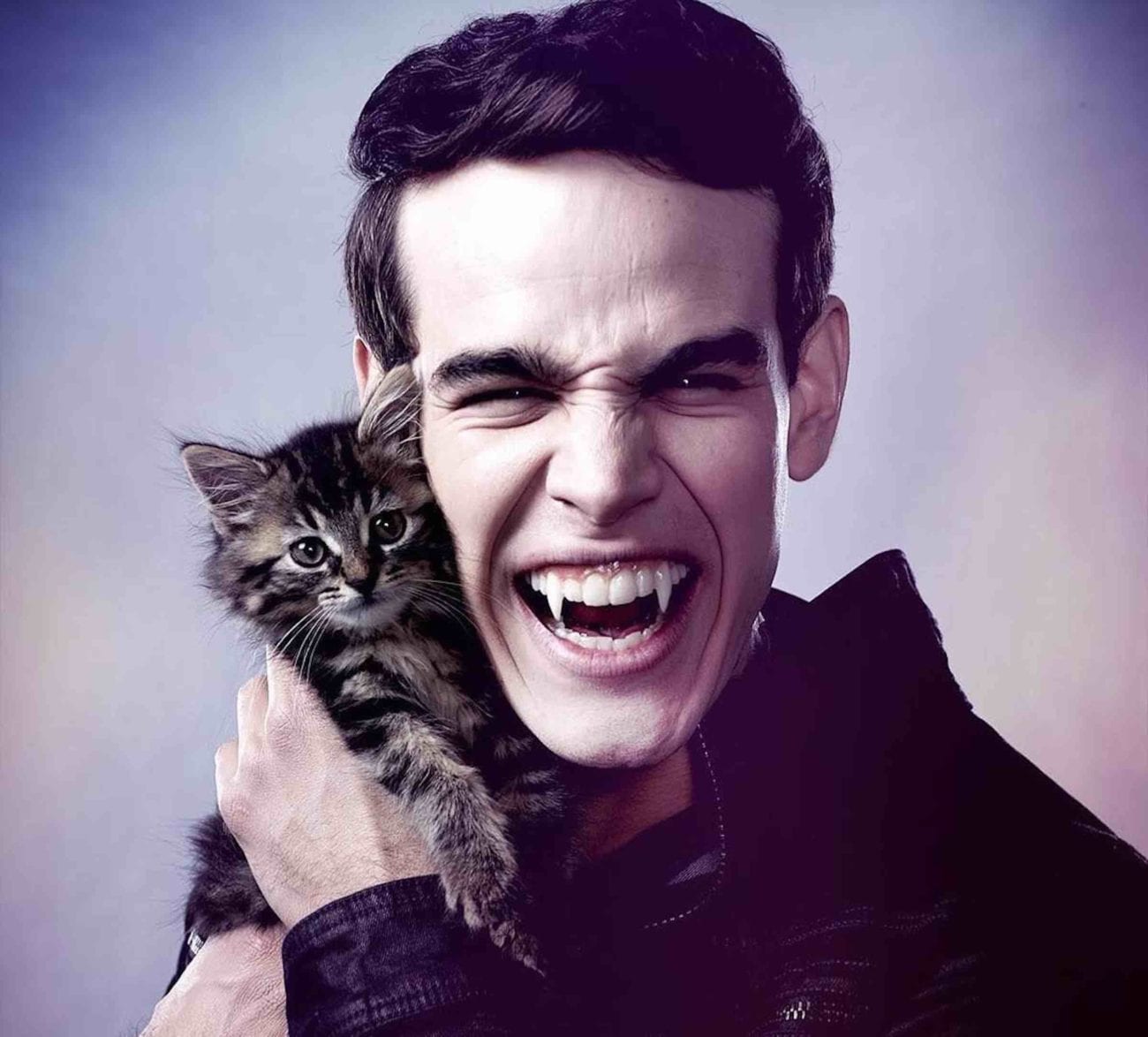 Simon Lewis (Alberto Rosende) is Shadowhunters’s New York Clan’s newest and worst vampire ever. He’s got no mystery, he’s awkward as all hell, and he’s the antithesis of scary. He brings humor and comic relief to moments of darkness throughout Shadowhunters and is a big ol’ pain in the Shadowhunters’ butts.

Yet Simon’s unwavering dedication to those he loves, even after he turns into a bloodsucking fiend, is what makes him one of our favorite characters in the Shadowhunters series. Portal in with us as we count down some of Simon’s best moments as he singlehandedly, and adorably, demonstrates how to dorkify vampire life. 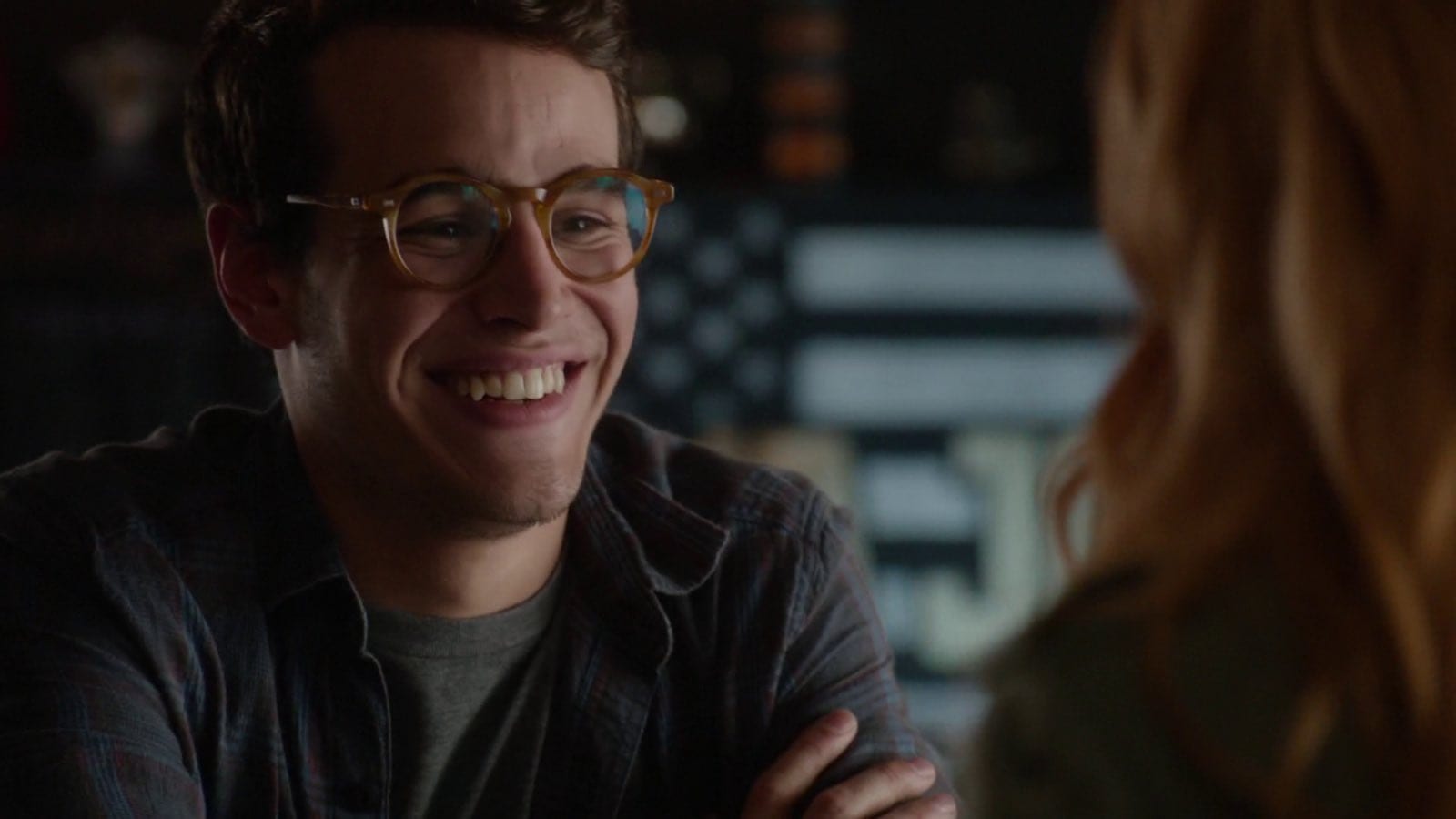 This is the superb first introduction to Simon as a vampire. After Camille (Kaitlyn Leeb) bites Simon, Clary (Katherin McNamara) makes the decision to save him from death. Shadowhunters vampire lore says one must be buried in order to be resurrected, so Clary and Jace (Dominic Sherwood) do just that.

When the time comes for Simon to rise, the ground shakes dramatically as Simon’s hand reaches through the packed dirt towards the moonlight. 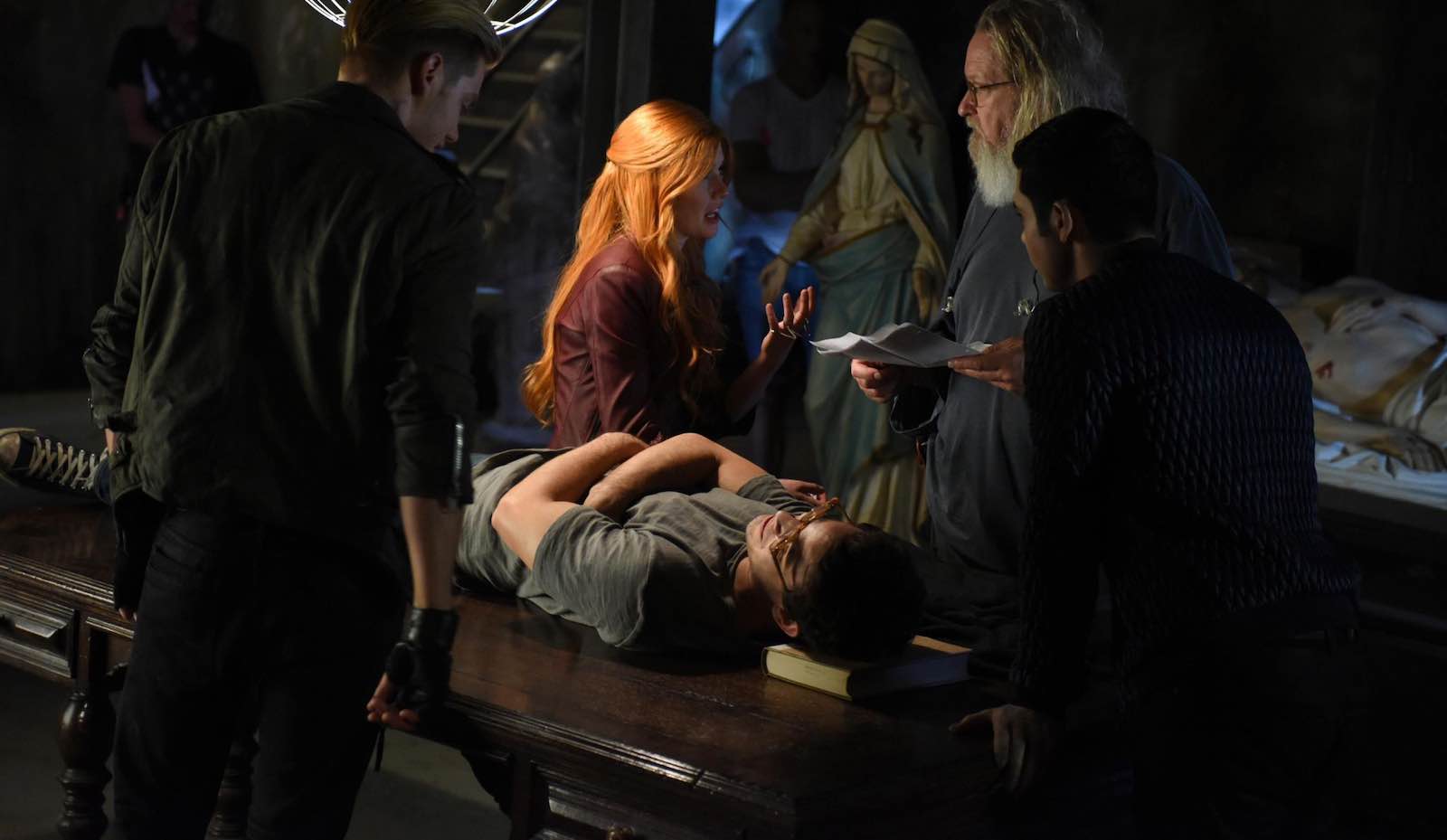 As he pulls himself through the dirt, Simon throws himself on the ground in front of his friends, hissing and hungry. Raphael (David Castro) throws Simon a bunch of blood bags and the fledgling unleashes himself on them. Vampire Simon looks scared, but also kind of scary, and we’re left to wonder if he’s emerging from the ground as the show’s newest superpower. 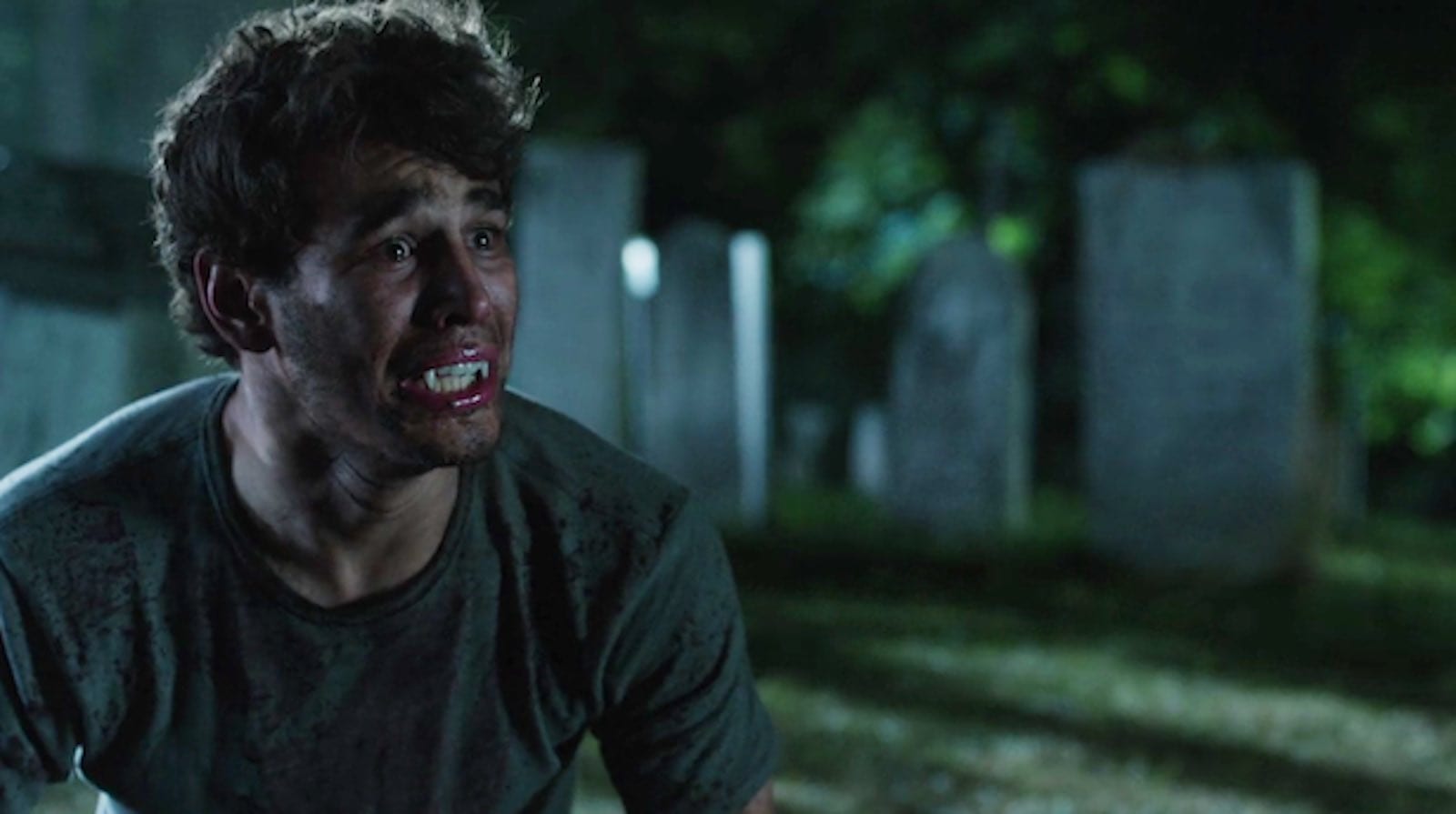 Inquiring minds want to know: will Simon be the new big bad? Nah. He’s still the biggest dork the Shadowhunters have ever known. 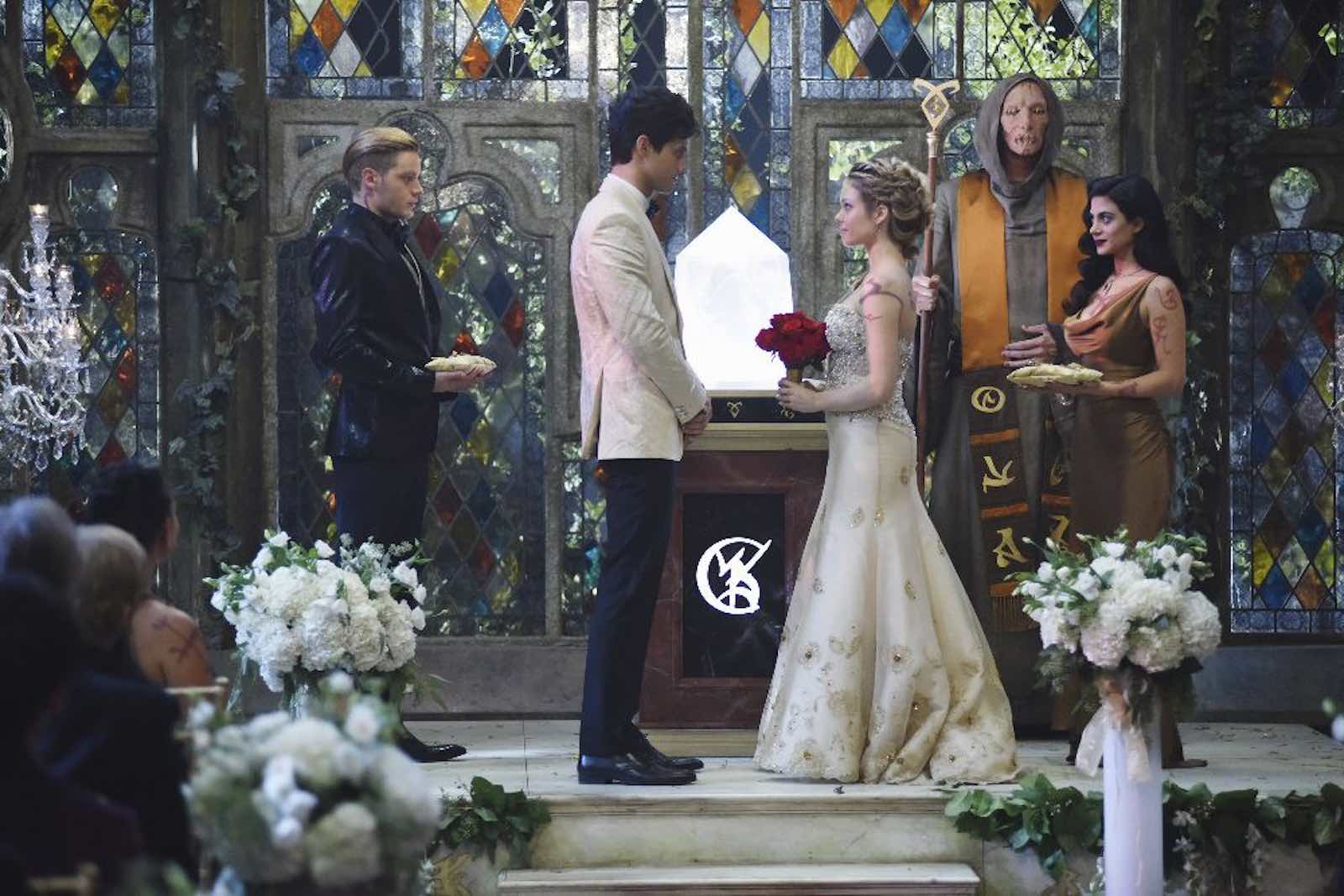 This episode finds Simon as a guest at Alec (Matthew Daddario) and Lydia’s (Stephanie Bennett) wedding (barf). After Alec abandons his bride at the altar and storms down the aisle to make out with Magnus (Harry Shum Jr.), the camera pans to the attendees and lands on Simon grinning like a goof. As Maryse (Nicola Correia-Damude) storms out, clearly not happy, Izzy (Emeraude Toubia) & Simon make their way toward Magnus & Alec. 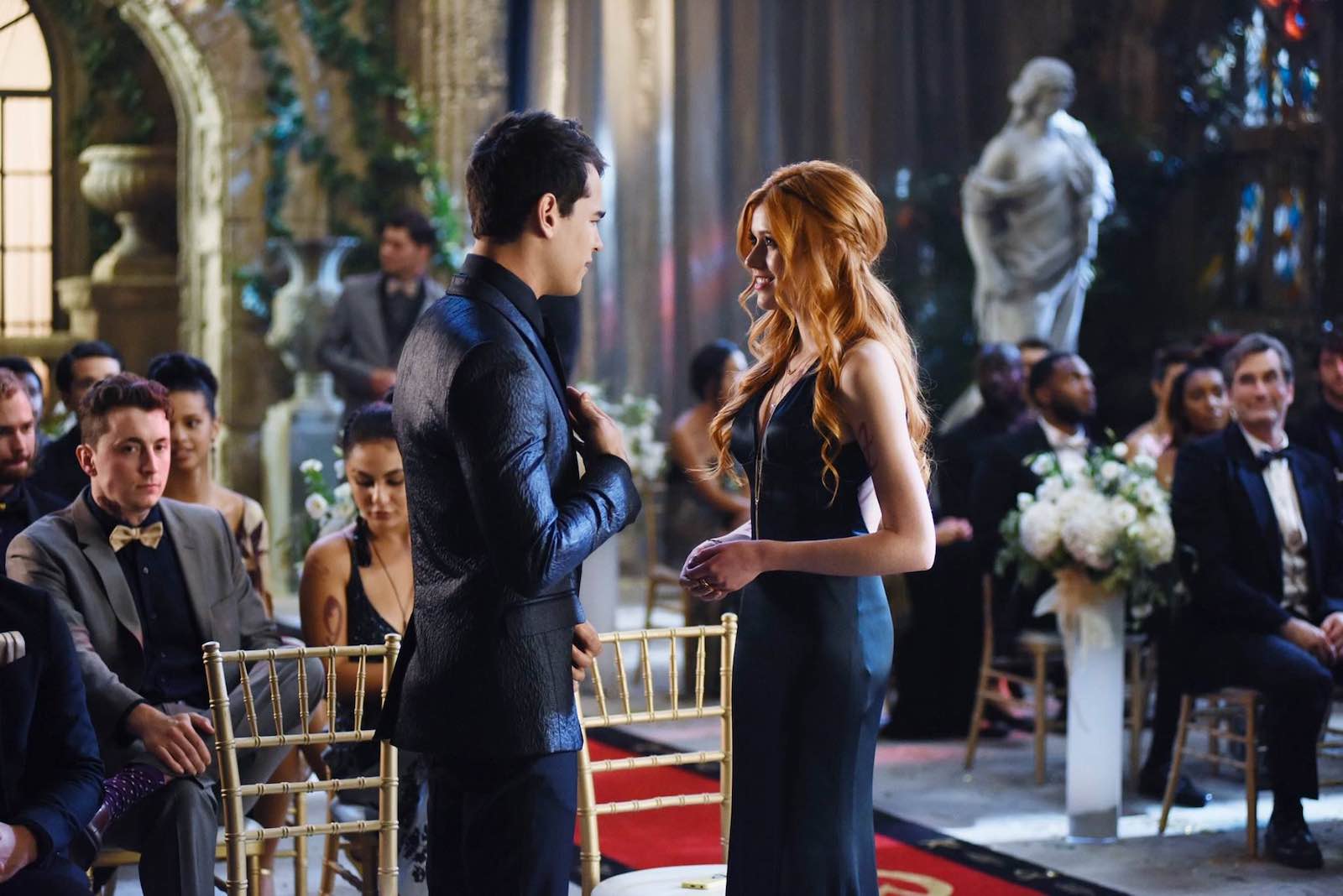 Simon gushes approval all over the two boys and starts quoting The Graduate, showering everyone in his nerdiness. Even as a vampire, Simon has absolutely no chill. Magnus, Alec, and Izzy just look confused – but we laughed and wanted to gush over Simon with our own approval. Big bad vampire? We think not. “Who invited the vampire?” asks Alec. Shut it, Alec – Simon in this moment is everything. 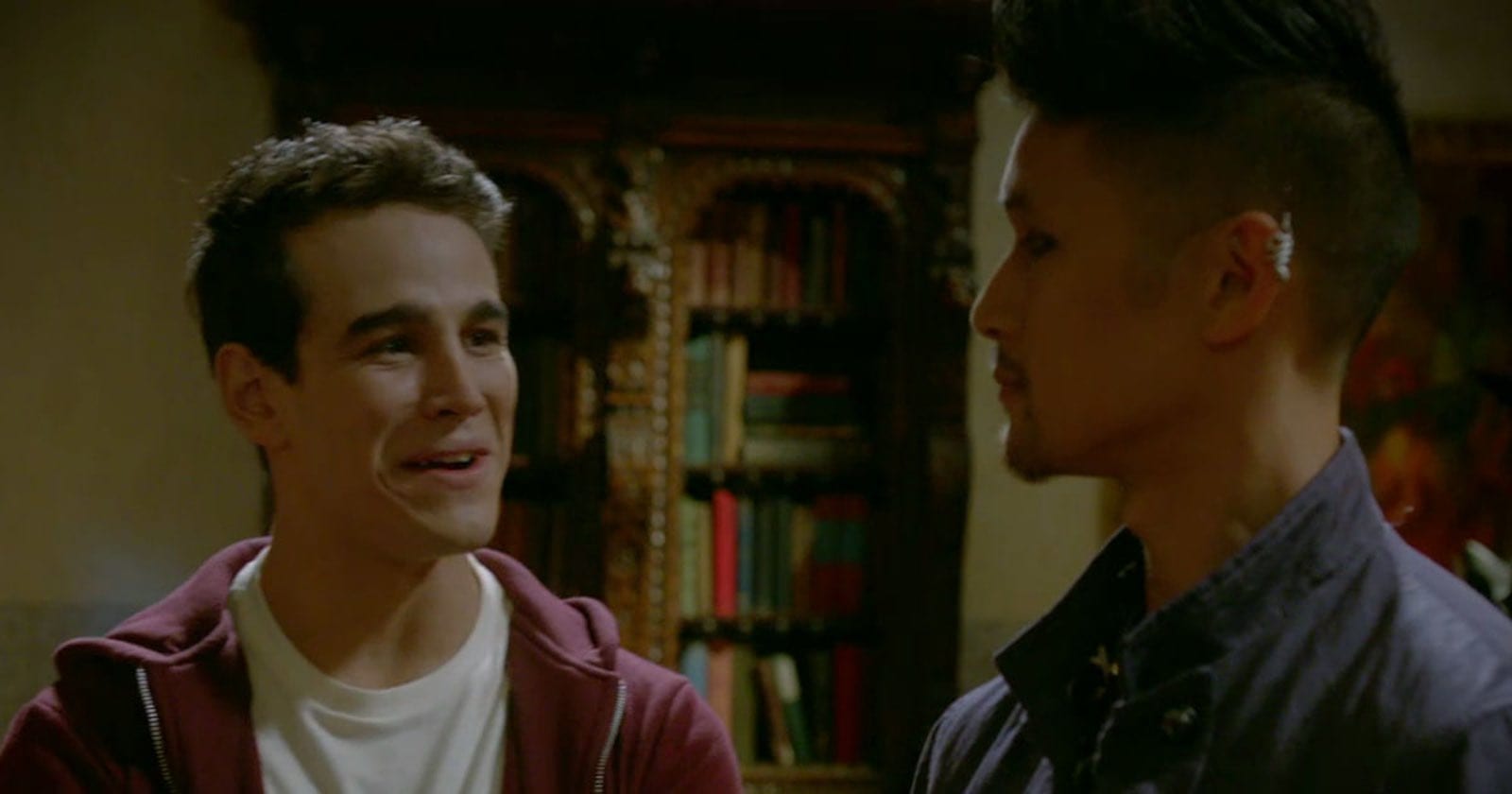 If you need any more proof that Simon is the cutest, cuddliest vampire ever, join him in this episode on a mission with Magnus to find Camille in India. As Magnus pokes around Camille’s apartment looking for things he may have left there, Simon, our softest Downworlder evarr, finds himself face-to-face with another fanged creature: Camille’s pet fire-breathing snake!

A terrified Simon tries to encanto the snake to do his bidding, but he fails, of course, because he’s the worst vampire ever. Scared of a snake, unable to activate his own powers, the undead kid’s a hot mess. Don’t worry, Simon, we’ll protect you! 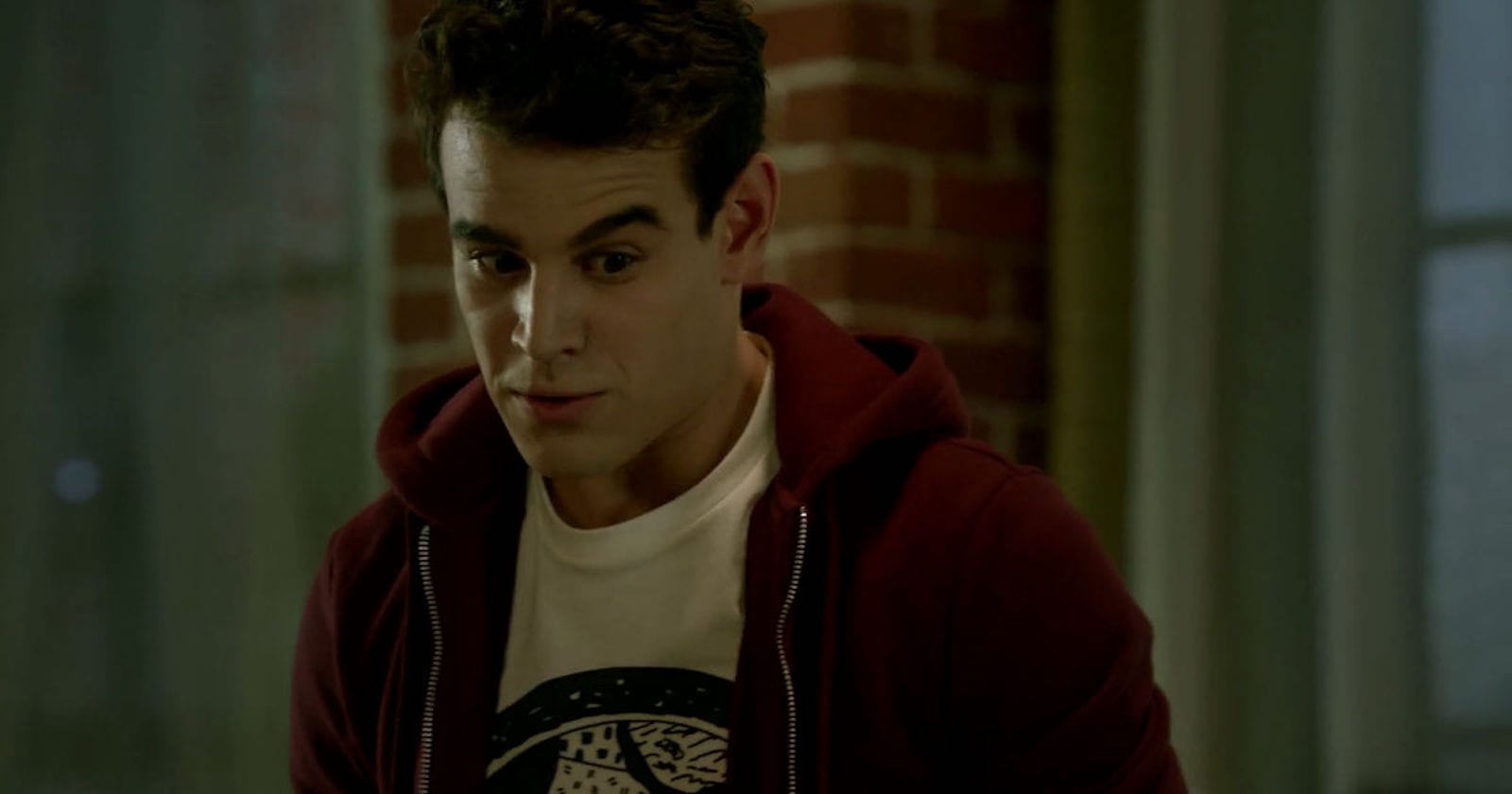 Out of sheer terror, Simon figures out how to encanto the creature – and just when we’re about to give him all the mad props in the world, dude starts stupidly cheering and dancing at his own accomplishment, losing all street cred. Un-scariest vampire ever!

As Jocelyn (Maxim Roy) hunts Jace & Valentine (Alan Van Sprang), Clary & Simon chase after her in hot pursuit. Clary, desperate to save Jace, is running after her mother’s tracking signal as fast as she possibly can. Unhappy with their speed, she orders Simon to “run faster”.

Adorable Simon scrunches up his face, clearly offended by her request, and tells Clary “I’m a vampire! I’m running slow for you!” This would have been the opportune time for Simon to be the hero and charge on ahead to rescue Jace from the clutches of Jocelyn, but nope! 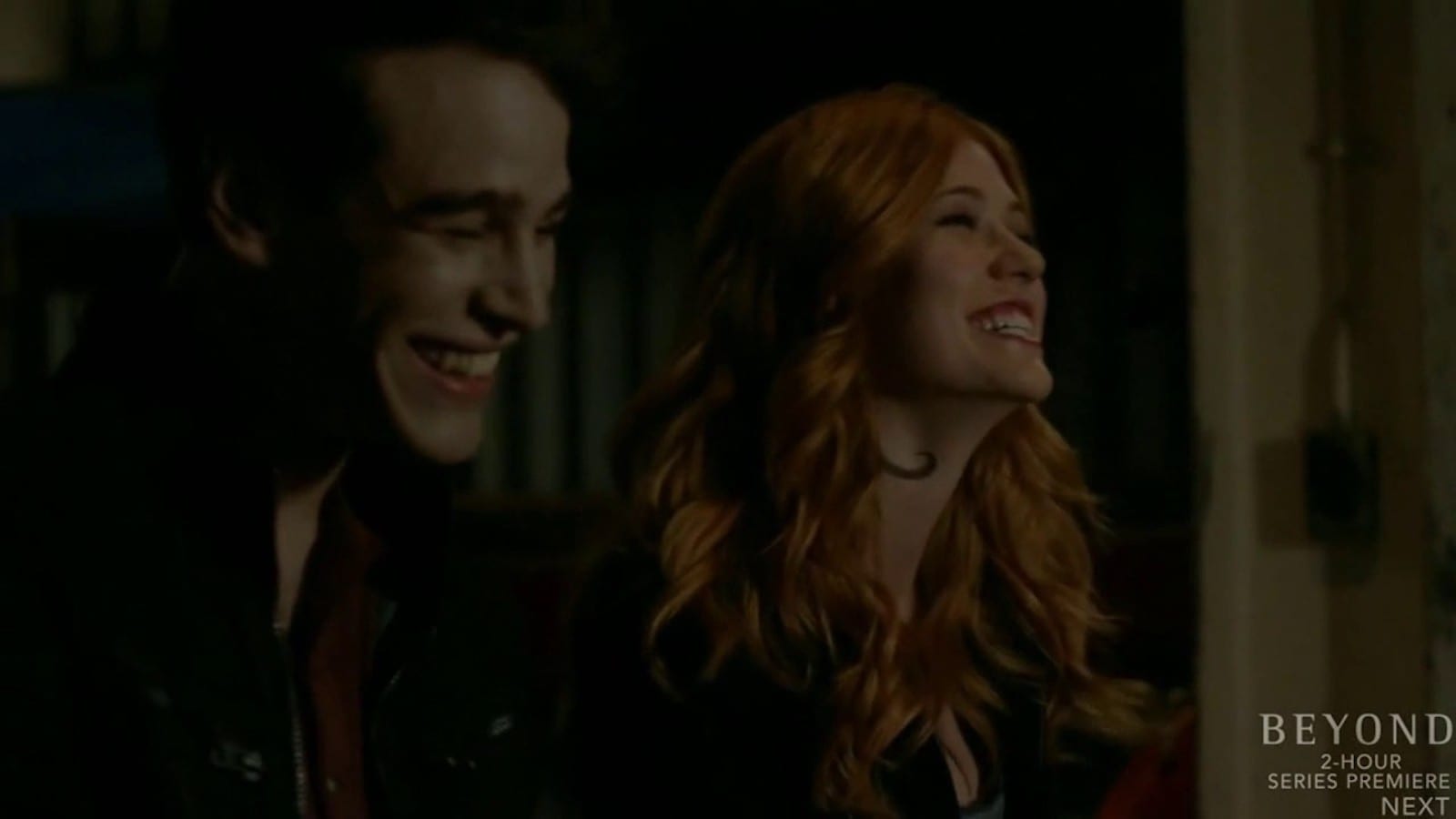 This idea never seems to occur to him and he continues to trot at un-vampire speed right alongside Clary. Cutest vampire fail ever, Simon.

Vampires are supposed to be sexy & alluring, fierce & independent. However, in this episode, Simon is missing his family in the most un-vampirey way possible, so he moves back home. The thing is, his family doesn’t know about his transition and Simon doesn’t exactly have stealthy powers of subterfuge. 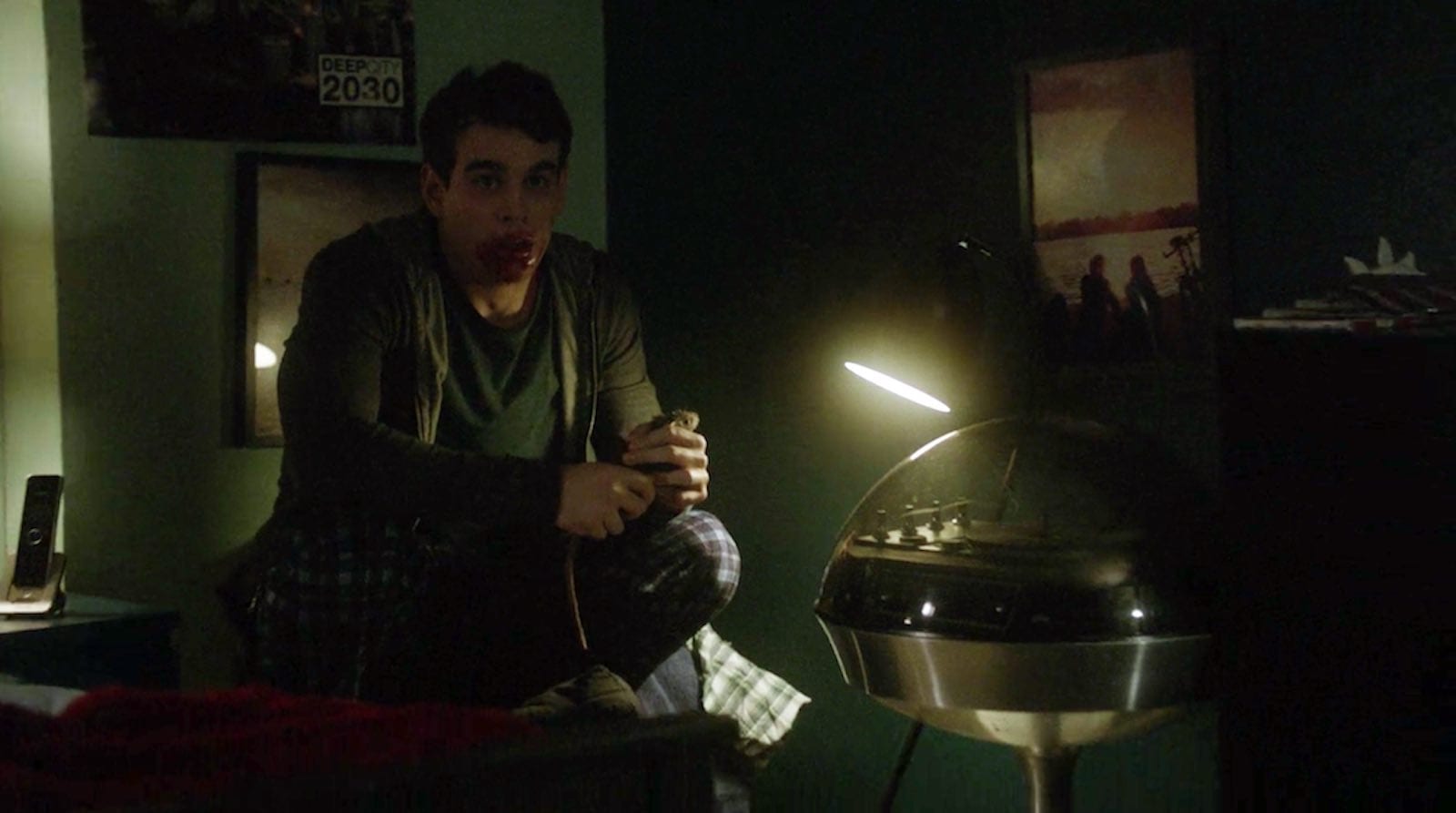 If it’s possible, his vampire transition seems to make Simon even more awkward around his family than before – and they can’t help but notice. Is he on drugs, is he drinking? His family wants to know what’s up, and Becky (Holly Deveaux) won’t let it go. Oh, Becky.

Becky throws out his blood, leaving him stranded in his room during the daylight without food. Gasp. Simon does the most disgusting thing possible and greedily feeds on a rat, only to be discovered mid-suck-session by his mother. We don’t need to remind you how that lovely moment turns out. 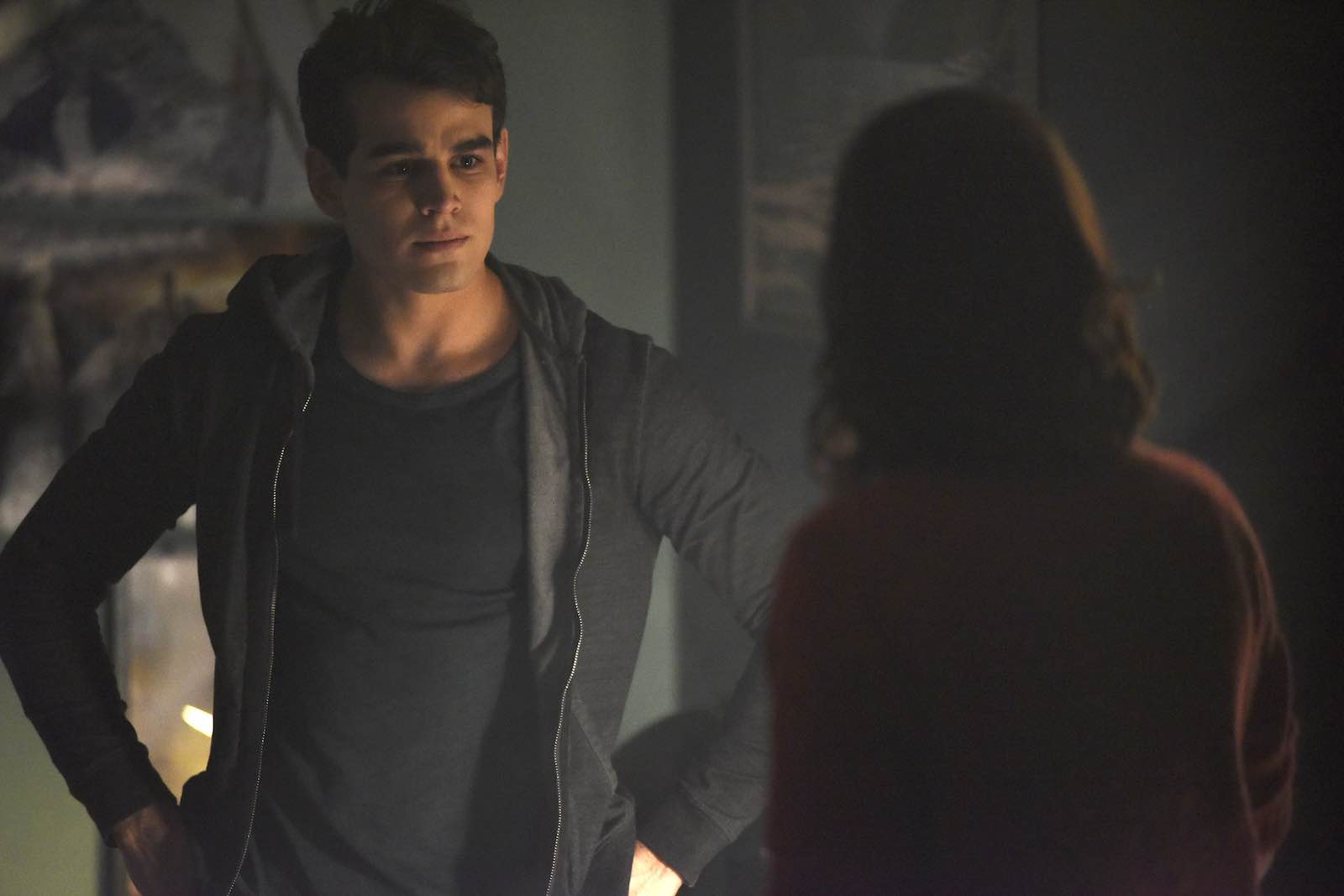 Really, Simon? Do you think classy Raphael or fearsome Camille would feed on a rat? We think not. Yuck.

The daylighter: “By the Light of Dawn” S2E10

This episode sees Simon’s fate take quite a different turn. He gets captured by Valentine and finds himself being used as bait to lure Clary to the Institute. Valentine cuts Simon’s throat and begins bleeding out. Gasp! 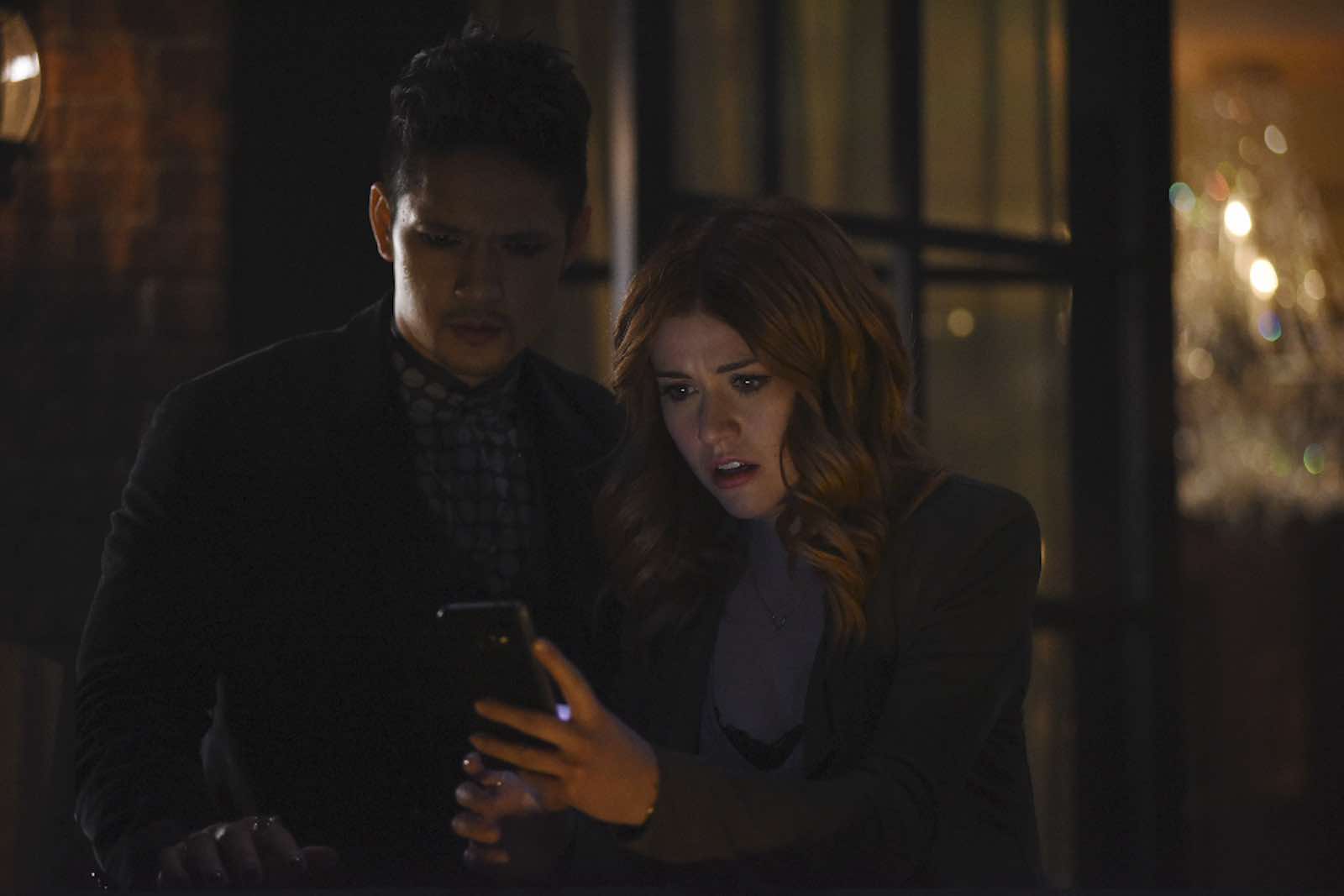 In a very dramatic turn of events, Simon ends up feeding on Jace in order to survive. Thing is, Jace has angel blood and the effects it has on Simon are nothing short of incredible. After Valentine activates the Soul Sword and slaughters all the Downworlders nearby, Clary is shocked to see Simon there – still standing. 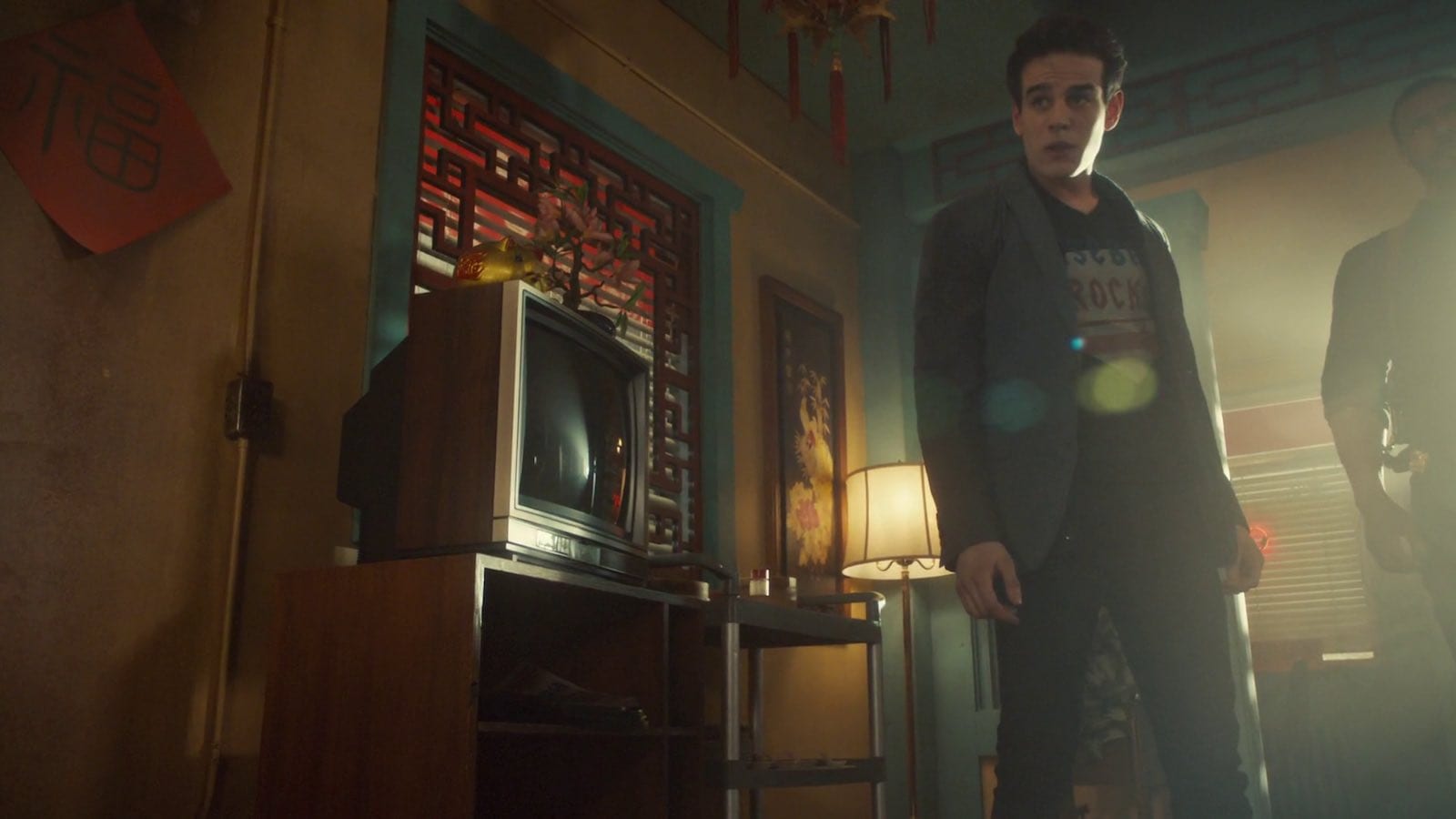 No one knows it yet, but Jace’s blood gave Simon extra powers and protects him against things like the sun (and the sword). This is a total badass turning point for Simon. While he doesn’t completely shed his dork-pire persona, he does move forward with a new confidence that he didn’t have before, and it’s about time.

Go into the light, Simon! 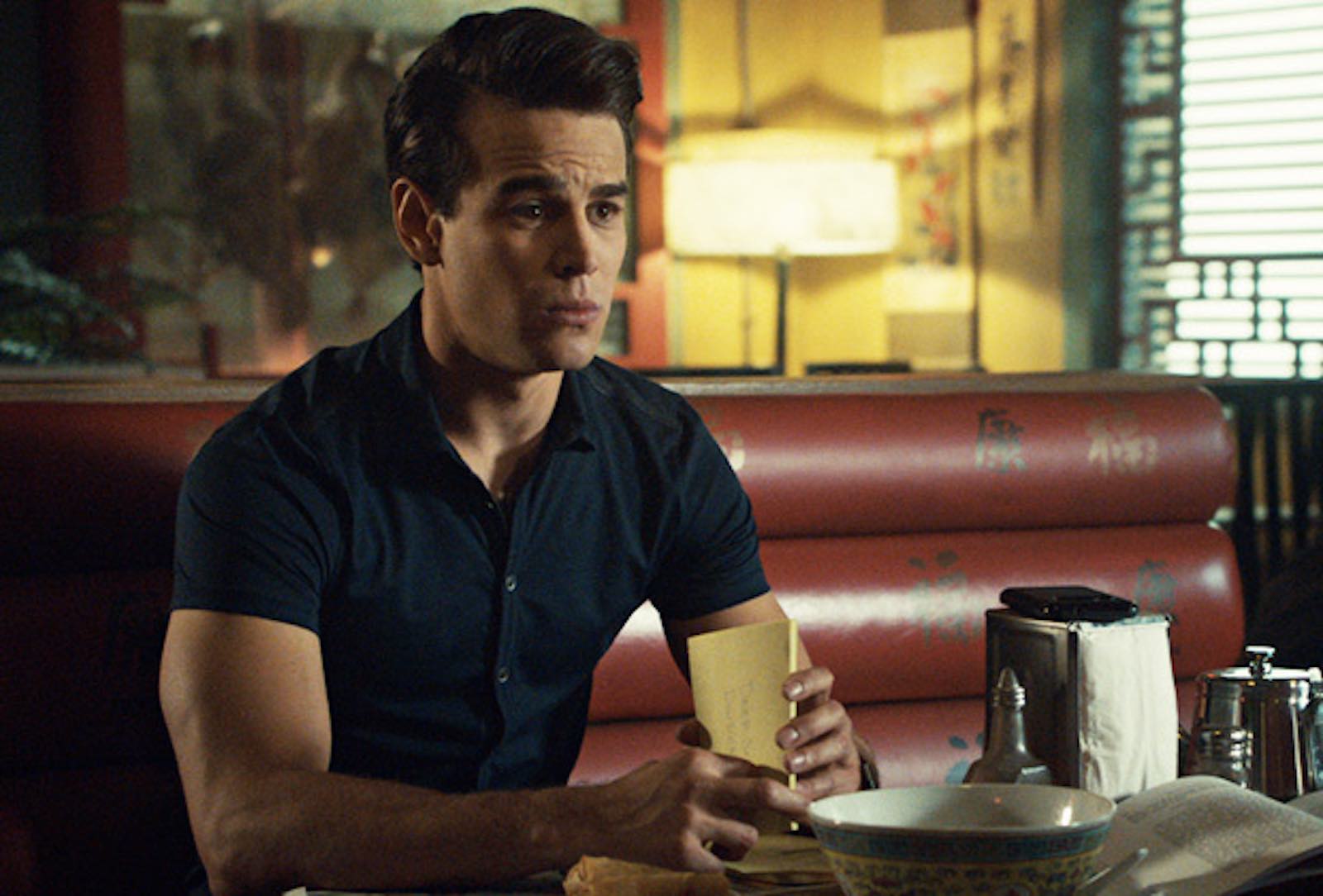 In a Shadowhunters episode prior to this one, Simon finds himself at the whim of the Seelie Queen, who brands him with some kind of unknown mark. Simon and his friends have no idea what the mark does, or why the Seelie Queen gave it to him – until this episode.

In the ultimate bully-versus-nerd standoff, Simon finds himself cornered by the wolfpack. As one of the werewolves tries to strike Simon with a baseball bat, the mark activates a protective shield around him and sends him flying across the Jade Wolf’s parking lot. 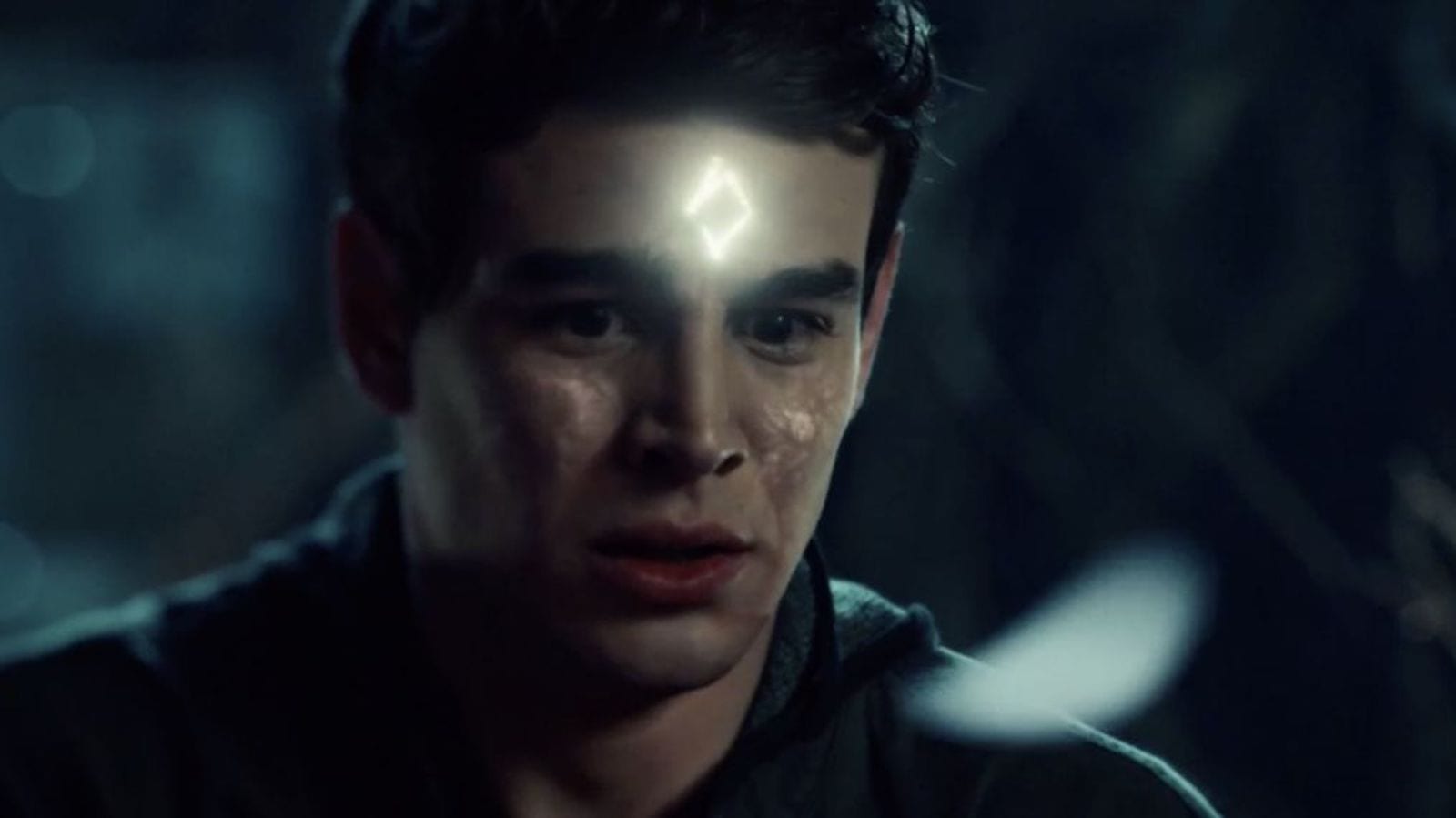 This is a defining moment for Simon in Shadowhunters: the mark elevates him to an undefeatable, almost godlike status . . . and we are so here for it! Who doesn’t love seeing the nerdy kid defeat the meathead thug? We do, that’s who. We want to thank the Seelie Queen for making this possible, you evil, wiley minx.

The season finale comes to a close with Simon & Jace engaged in a training scene at the Institute. This is everything Jimon fans could hope for. Simon finally gets to show off his vampire abilities, which he seems to harness well now as Jace guides him through an intense training session. 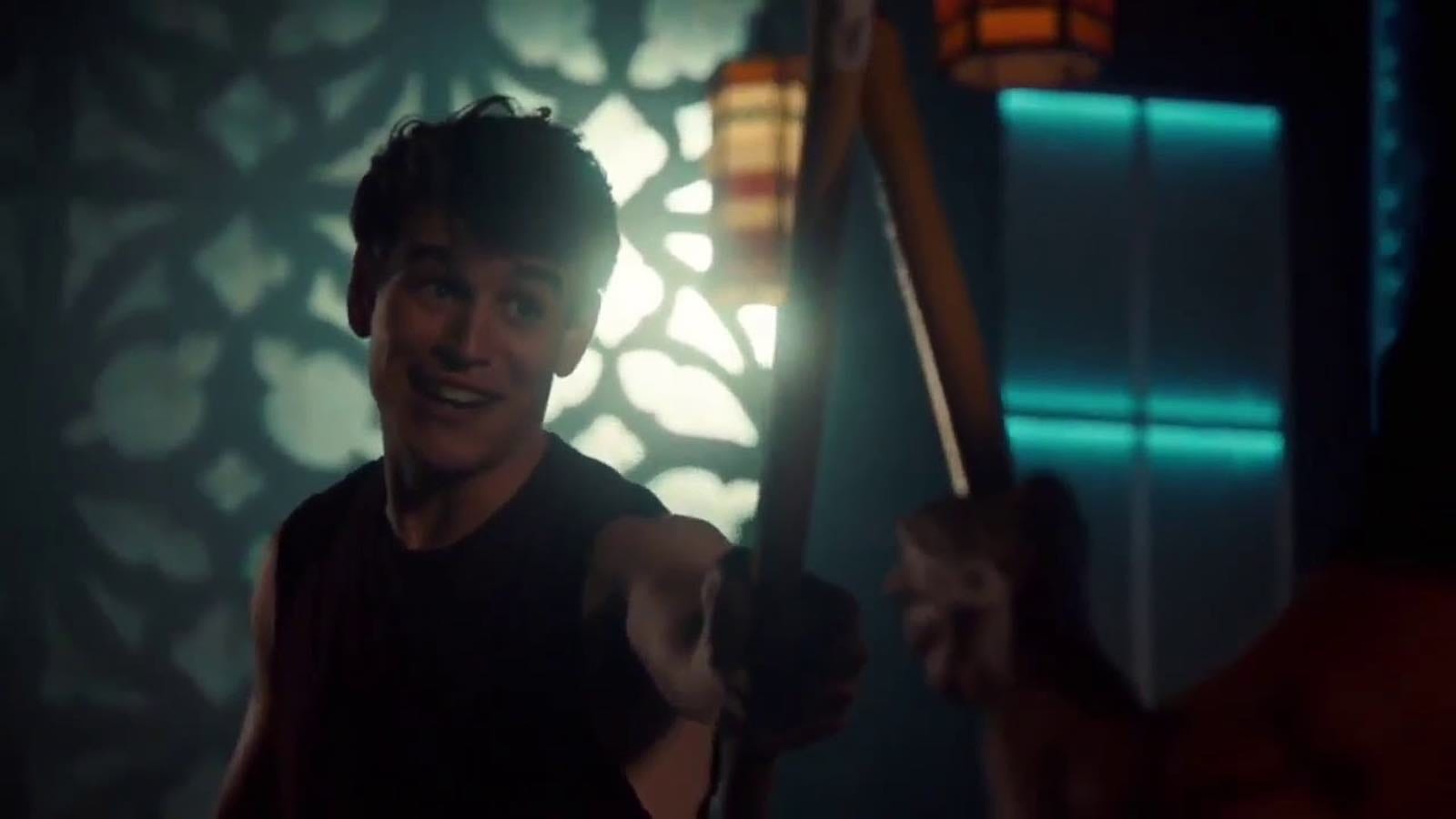 Simon is confident, strong, fast, and almost kicks Jace’s ass. The greatest thing about this scene isn’t watching Simon finally get a chance to fight on the same level as the Shadowhunters, however; it’s watching the friendship that has clearly developed between former rivals Jace & Simon.

We squealed in delight as Simon & Jace stumble around the training room and bash each other with sticks, engaging in playful banter that shows their equal respect for each other. There is no dorky vampire in sight in this scene; Simon is impressive, powerful, in-control, and wise: everything a mature vampire should be.

Do we think Simon shed is inner dork completely? Nah – but he’s definitely owning his place in that training room. We also want to shout out Simon’s delicious biceps in this scene. We definitely stan a vamp with a solid, lean bicep, and Alberto does not disappoint.