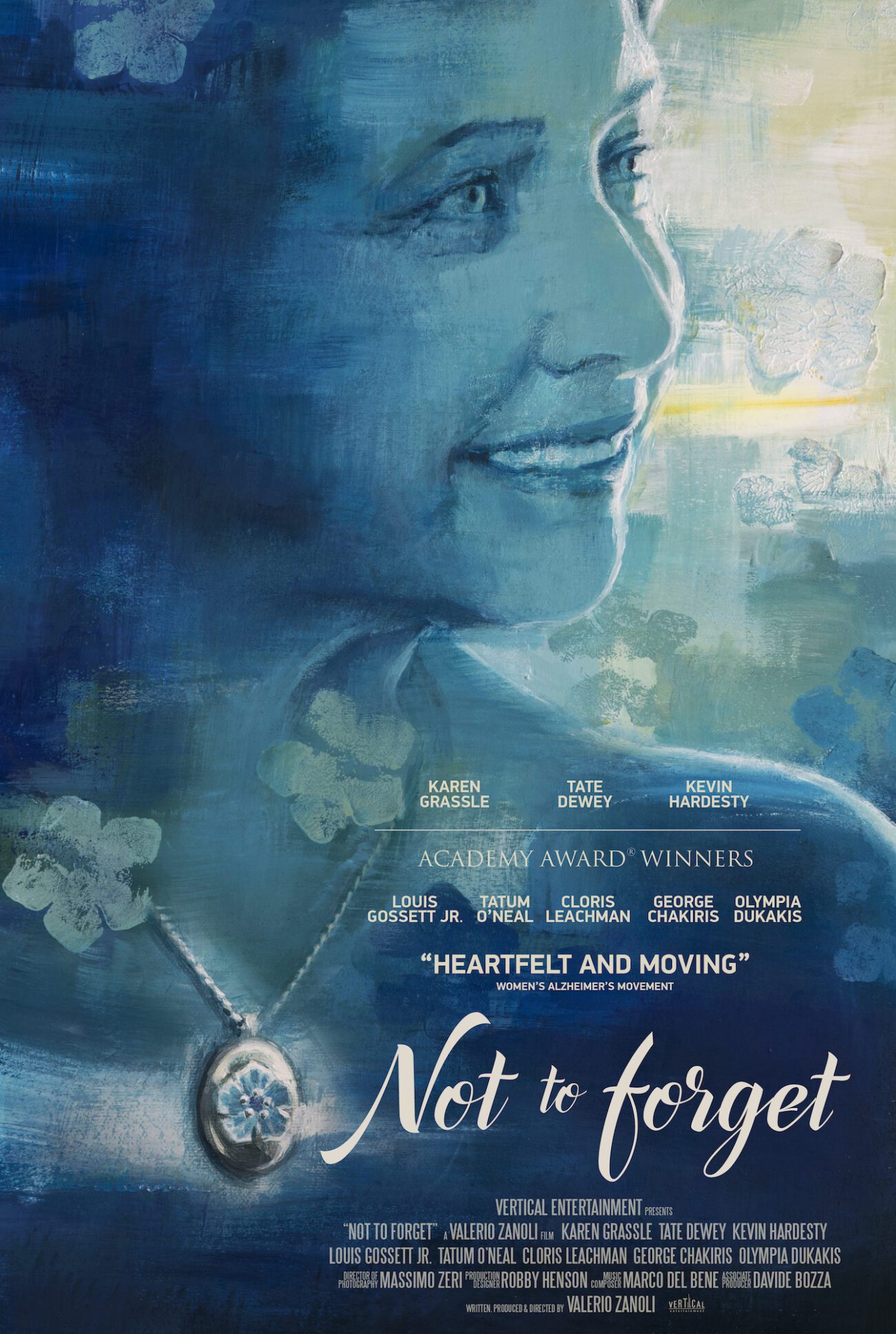 ‘Not To Forget’: A heartwarming movie starring Karen Grassle and 5 Oscar winners

NOT TO FORGET is an indie drama that stars Karen Grassle and 5 Academy Award winners: Tatum O’Neal (Paper Moon), Louis Gossett Jr. (An Officer and a Gentleman), George Chakiris (West Side Story), Olympia Dukakis (Moonstruck), and Cloris Leachman (The Last Picture Show). On the 1-year anniversary of her death, we want to keep Cloris Leachman’s memory alive and honor her final performance in NOT TO FORGET, which Women’s Alzheimer’s Movement described as “heartfelt and moving”.

NOT TO FORGET is an emotional film that warms the heart and promotes good family values. The story follows Chris, a self-centered millennial who has grown up to become a con artist. After one of his scams goes wrong, he is sentenced to take care of his grandmother, who is affected by Alzheimer’s. As he realizes the extent of the elderly woman’s wealth, Chris decides to get his friends involved in their ultimate heist. However, things don’t go as planned… and he finds himself struggling between his painful past and newly found family values.

NOT TO FORGET is currently in distribution through Vertical Entertainment and available on Amazon Prime: www.nottoforget.online. 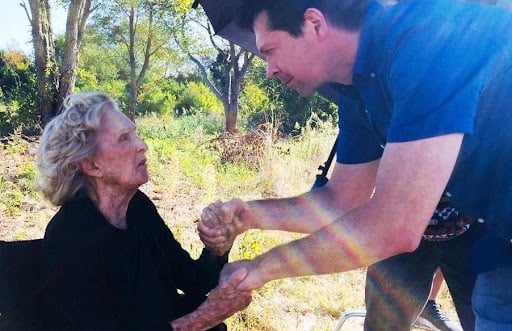 Director Valerio Zanoli on the set of NOT TO FORGET with Cloris Leachman.

We were able to interview NOT TO FORGET director and producer Valerio Zanoli (www.valeriozanoli.com).

FD: How was it to work with such an extraordinary cast?

VZ: It was an incredible experience. I had the honor of working with great Hollywood actors who made themselves available to help me bring to life a story that is particularly sweet and uplifting. I’m very pleased with all of them, and I’m very proud of their performances and of what they shared about me and our film.

Cloris Leachman won an Academy Award for The Last Picture Show, a Golden Globe Award, and a Daytime Emmy Award. She also won eight Primetime Emmy Awards from 22 nominations, making her the most nominated and, along with Julia Louis-Dreyfus, most awarded actress in Emmy history.

Cloris Leachman’s daughter Dinah Englund wrote: “Over the past few years, I have assisted my late mother on the several films she starred in. When Valerio offered her a role in his movie, which turned out to be her final film role, I was thrilled to accompany her in this endeavor. From my privileged position on set, I was happy to see that Valerio was taking his time with my mom. Though her age and health didn’t make it easy, Valerio was very patient, worked around her needs, and was determined to make her shine. He went so far to create a character carved from her personality. Spending time with her also off set, he made sure to listen to her voice and treasure her advice. [I watched the movie and] I thought it was sweet and charming and quite amazing.”

Olympia Dukakis performed in more than 130 stage productions, more than 60 films and in 50 television series. She won an Academy Award and a Golden Globe, among other accolades, for her performance in Moonstruck.

NOT TO FORGET also features the final performance of Olympia Dukakis. Before passing away, the famed actress wrote: “Throughout my career, I worked with many directors and producers, but I must praise and recommend Valerio for his extraordinary ability and passion. When he approached me, Valerio wanted to create a movie to raise awareness and funds for the fight against Alzheimer’s, and I wanted to be part of it. I believed in his ambition and capabilities, and I am very happy I did. Valerio created a sweet film, which I enjoyed watching. It is going into distribution later in 2021 and is part of a bigger project, which he envisioned and gave life to: Let’s Make a Difference (www.letsmakeadifference.info).

Valerio was eager to have me in his film, and he was able to move the entire production to New York City just to film with me. He respected the limitations imposed by my age, and he calmy and professionally helped me feel at ease, before and during filming. I was glad that Valerio kept in touch with me for the holidays and for my birthday, kept me updated about the status of the film, and asked for my feedback. He’s an exquisite person, not just an outstanding director. Thank you! A total pleasure!!”

Karen Grassle is the beloved actress who played Caroline Ingalls (Ma) in the NBC television drama series Little House on the Prairie.

Karen Grassle plays the character of Melody, and she wrote: “Working on the film NOT TO FORGET was an unforgettable experience. After writer and director Valerio Zanoli approached me for the role of Melody, I read the screenplay and I immediately accepted to be part of this sweet and charming story. Valerio is gifted as well as dedicated to his field. He has been specializing in films with important social messages: From leukemia to child obesity, from bullying to homelessness.

Our film dealt with dementia and was produced as an attempt to further educate and draw funds to this issue. Valerio is a humble individual, who is always open to suggestions. At first, we had slightly different visions about my character, but he enthusiastically accepted my notes and allowed me to make it my own. Valerio is constructive, attentive, and open-minded. I am pleased and proud our film NOT TO FORGET. I truly hope it can be used to inspire and move people to action.”

George Chakiris is best known for his performance as Bernardo in the 1961 film version of West Side Story, for which he won both the Academy Award and the Golden Globe Award.

After a 25 year long hiatus, George Chakiris returned to the big screen and wrote: “When NOT TO FORGET came about, I was really pleased to take part in a film about a very important subject. I worked a whole day on that, so if you blink you could miss me, but I was happy to be involved because of the very important subject matter. I was eager to help make a difference by supporting this sweet / charming film and the fight against Alzheimer’s.” 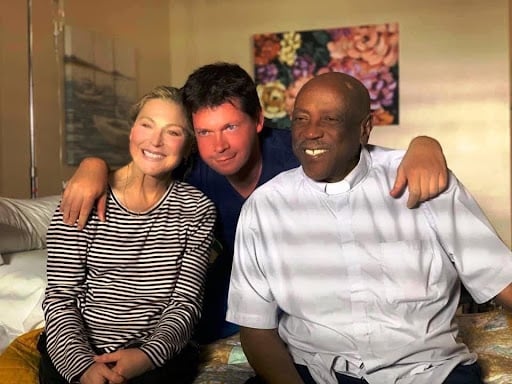 Tatum O’Neal is the youngest person ever to win a competitive Academy Award, which she won at age 10 for her performance as Addie Loggins in Paper Moon opposite her father, Ryan O’Neal. Louis Gossett Jr. is best known for his role as Gunnery Sergeant Emil Foley in the film An Officer and a Gentleman, winning him the Academy Award for Best Supporting Actor. In the photo, the 2 actors are on set with filmmaker Valerio Zanoli.

Tatum O’Neal and Louis Gossett Jr. are part of the cast of NOT TO FORGET, too. All the actors gave their best and were highly motivated by our common goal of helping the fight against Alzheimer’s.

Why did you decide to make a film about Alzheimer’s?

I started developing the movie NOT TO FORGET in 2018, after learning about the terrifying numbers related to Alzheimer’s Disease, a form of dementia that has been called a “plague of the XXI century”. Every 65 seconds, a new brain develops Alzheimer’s and two-thirds of them belong to women.

My intent was clear from the very beginning: Giving life to a film that could have a social impact and become a tool to raise awareness for the fight against Alzheimer’s. I wanted to entertain audiences around the world while informing them about this terrible disease and, above all, about the ways everyone can prevent it. One-third of Alzheimer’s cases may be preventable by addressing lifestyle factors. It’s never too early to start.

From the beginning, I wanted to create a different kind of “Alzheimer’s film”. I was determined to make a film with the right compromise of light situations and dramatic moments. Instead of focusing on an elderly person, I decided to take the perspective of a young caregiver. So, I wrote the story of a millennial who doesn’t know anything about Alzheimer’s and finds himself taking care of Grandma.

Can you tell us more about the importance of caregivers?

Dementia affects approximately 50 million people around the world, with nearly 10 million new patients every year. However, this terrible disease also affects the caregivers – the unsung heroes, often family members willing to sacrifice themselves to take care of their loved ones. There are 6 million Americans living with Alzheimer’s, and there are 11.2 million Americans providing unpaid care to someone with Alzheimer’s or dementia. Also in this case, two-thirds of them are women.

Extensive data and useful resources are available at TheWomensAlzheimersMovement.org – a nonprofit organization founded by Maria Shriver that raises awareness about women’s increased risk for Alzheimer’s, educates the public about brain health and prevention, and raises funds to support women-based research.

Karen Grassle and Tate Dewey in a scene from the movie NOT TO FORGET.

Do you have a personal connection with Alzheimer’s?

I don’t have Alzheimer’s in my family, but, in a way, this is a disease that affects me, too. Anyone could become a patient or a caregiver, and we should all take care of each other. NOT TO FORGET is part of my project Letsmakeadifference.info and is an invitation for everyone to serve, find purpose, and have an impact.

In the movie, Grandma forgets names and events, but she remembers love. On the contrary, her grandson and caregiver Chris remembers everything (to the point he made a “career” out of counting cards)… but he forgot the value and importance of family. In this perspective, NOT TO FORGET becomes a journey about finding faith and, above all, home.

NOT TO FORGET is available on a multitude of streaming platforms, including Amazon Prime (www.nottoforget.online), Google Play, Apple TV, Vudu, and DirecTV.