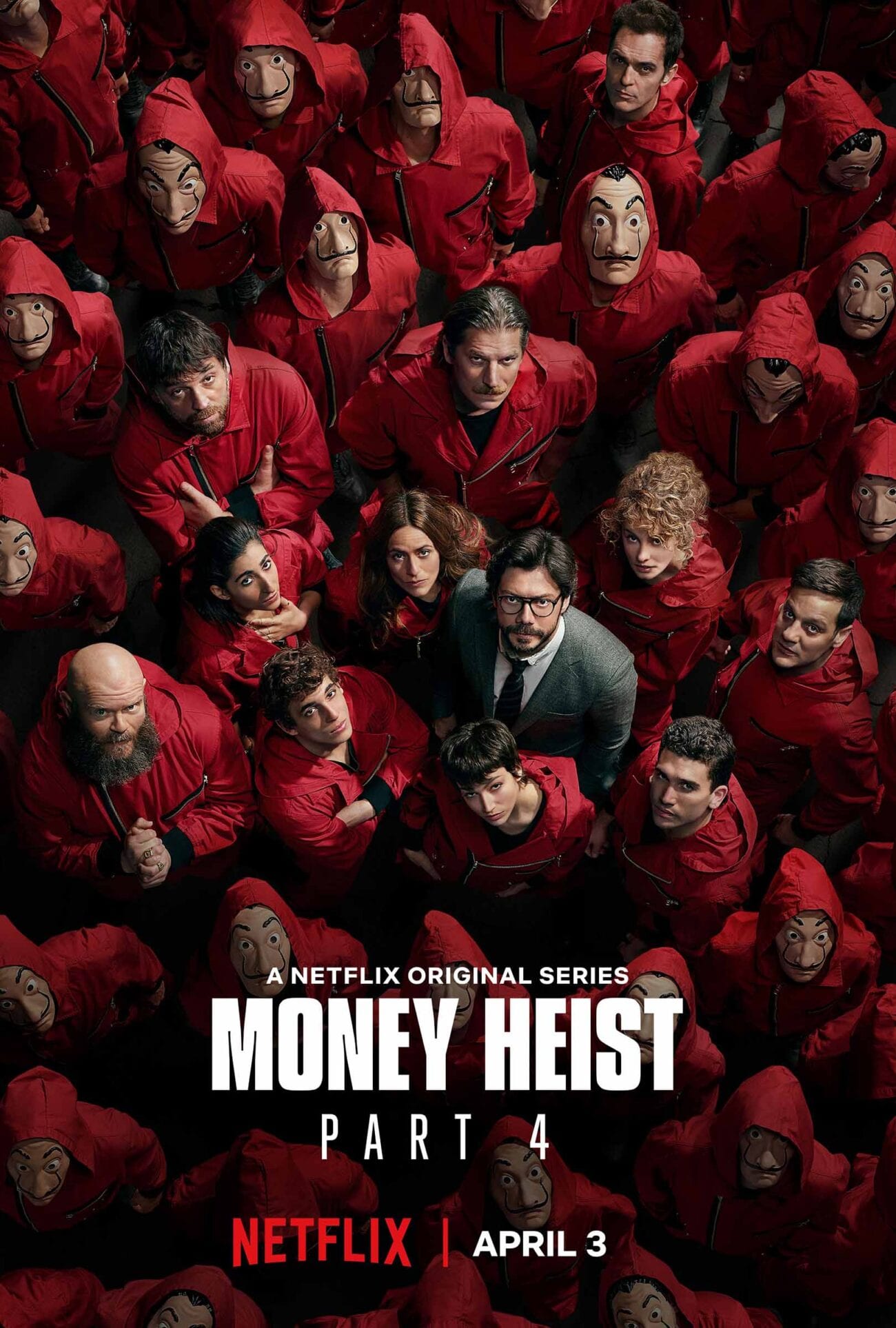 It’s been two months since Money Heist season 4 finally returned to Netflix to finish off the heist on the Bank of Spain. We know you probably binged it within one weekend, and are still trying to figure out exactly what you just watched.

The rules of the heist have changed greatly after the disastrous ending of season 3, so we’re spending a lot of the season trying to clean up the mess left behind. If you need a reminder of what exactly went down in Money Heist season 4, we got you covered. 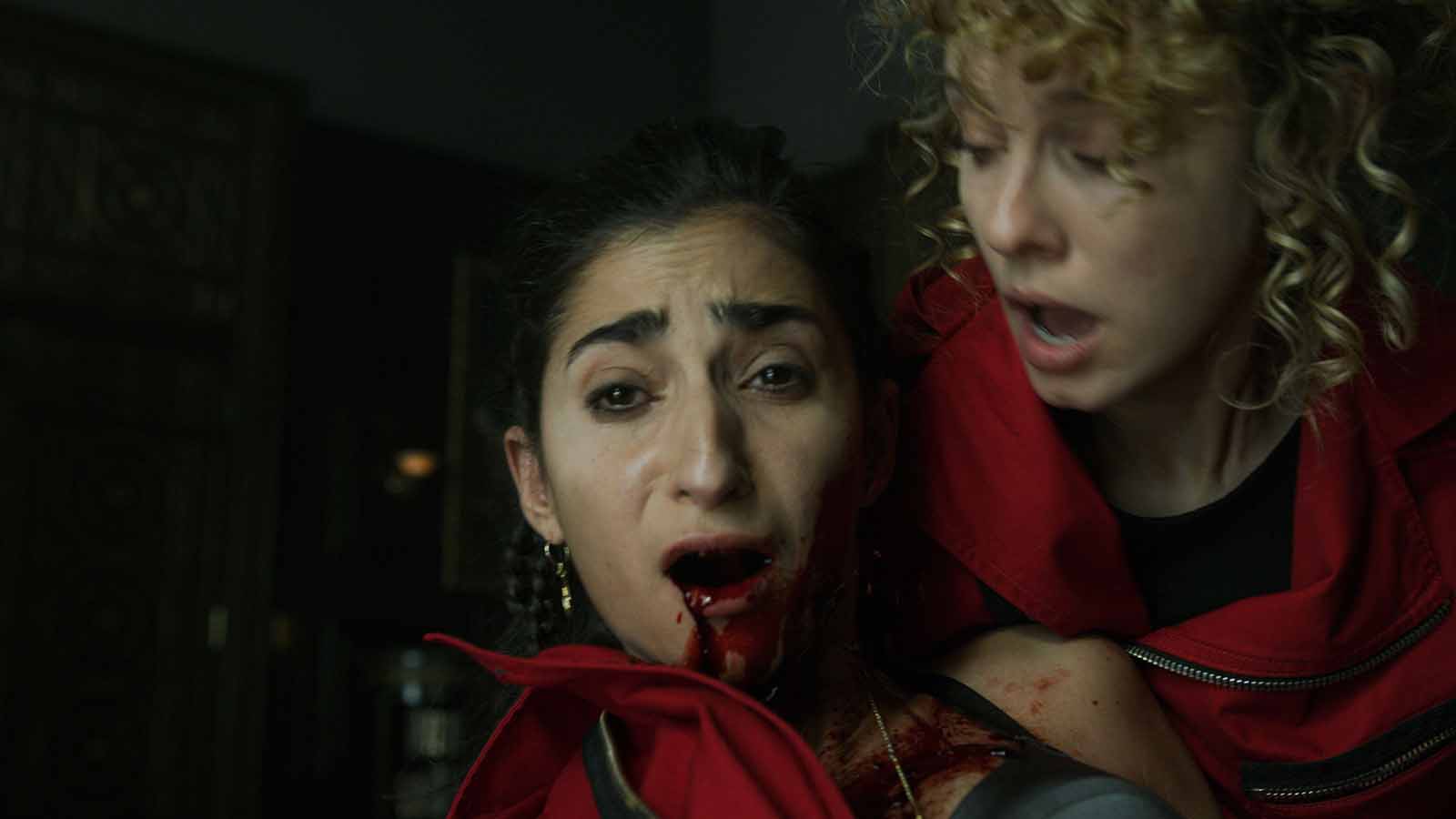 Of course, the biggest priority in the beginning of season 4 is saving Nairobi (Alba Flores) after getting shot by a sniper at the end of season 3. But even Nairobi knows this group can’t do anything together without trying to beat the crap out of each other. She wants the gang to release her to police so she can get proper medical care.

Tokyo (Ursula Corbero), for once in her life, actually thinks with her brain and stages a coup, leading the surgery thanks to video chatting with a surgeon in Pakistan. In the past, we see Nairobi convince Tokyo to ask the Professor (Alvaro Morte) to take on the role of leader this time around, but he shoots her down. 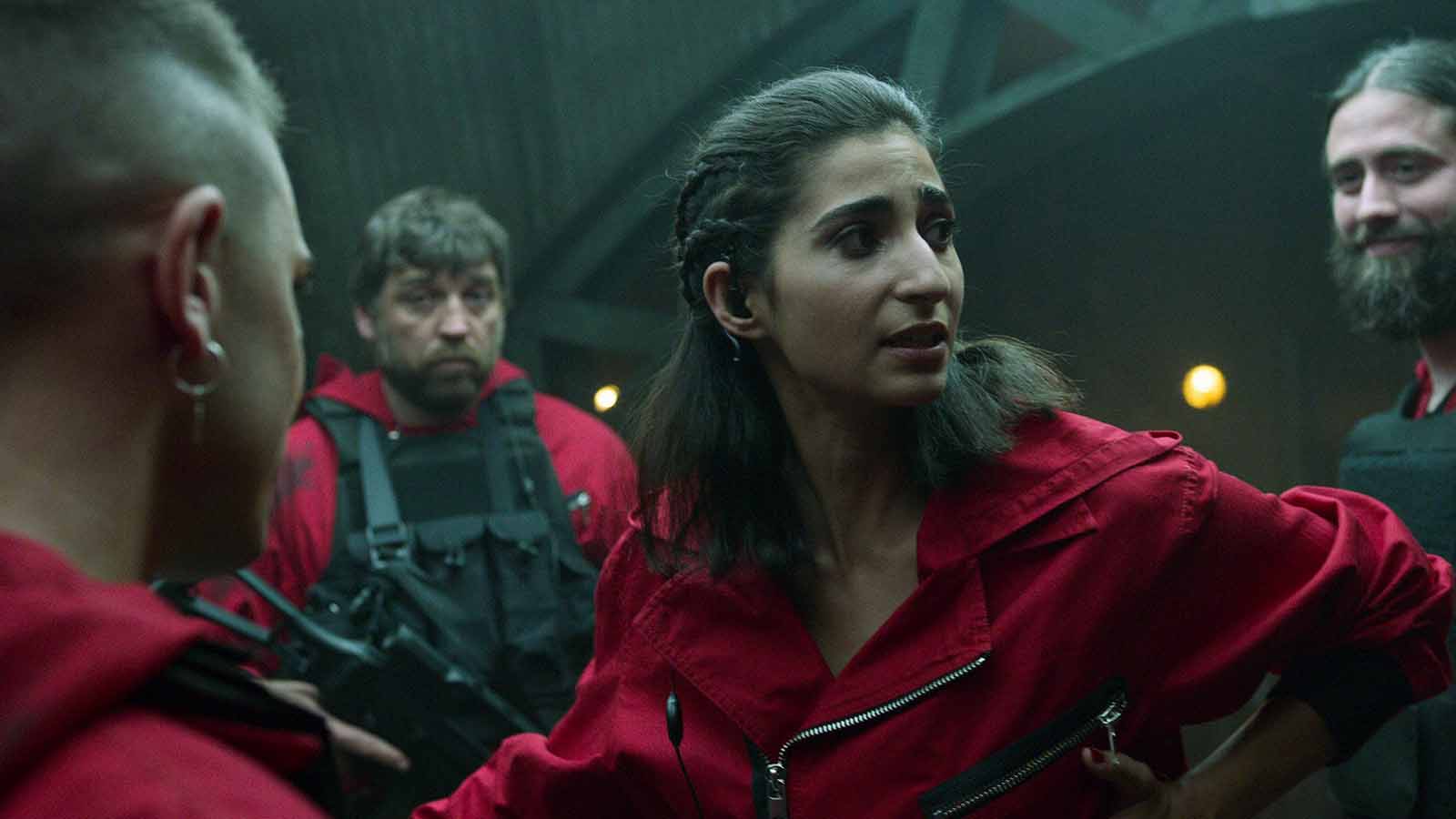 Meanwhile, the Professor is striking a peace treaty with police to get help for Nairobi and get the supplies needed to help with the surgery. Successfully, Tokyo cuts out a portion of Nairobi’s lung, but saves her life at the end of the day. Too bad Palmero (Rodrigo de la Serna) is throwing a temper tantrum because Tokyo threw him out of power.

The gang restrains him so he can’t mess anything up, but little do they know he’s still pissed, and this is not going to end well for them. 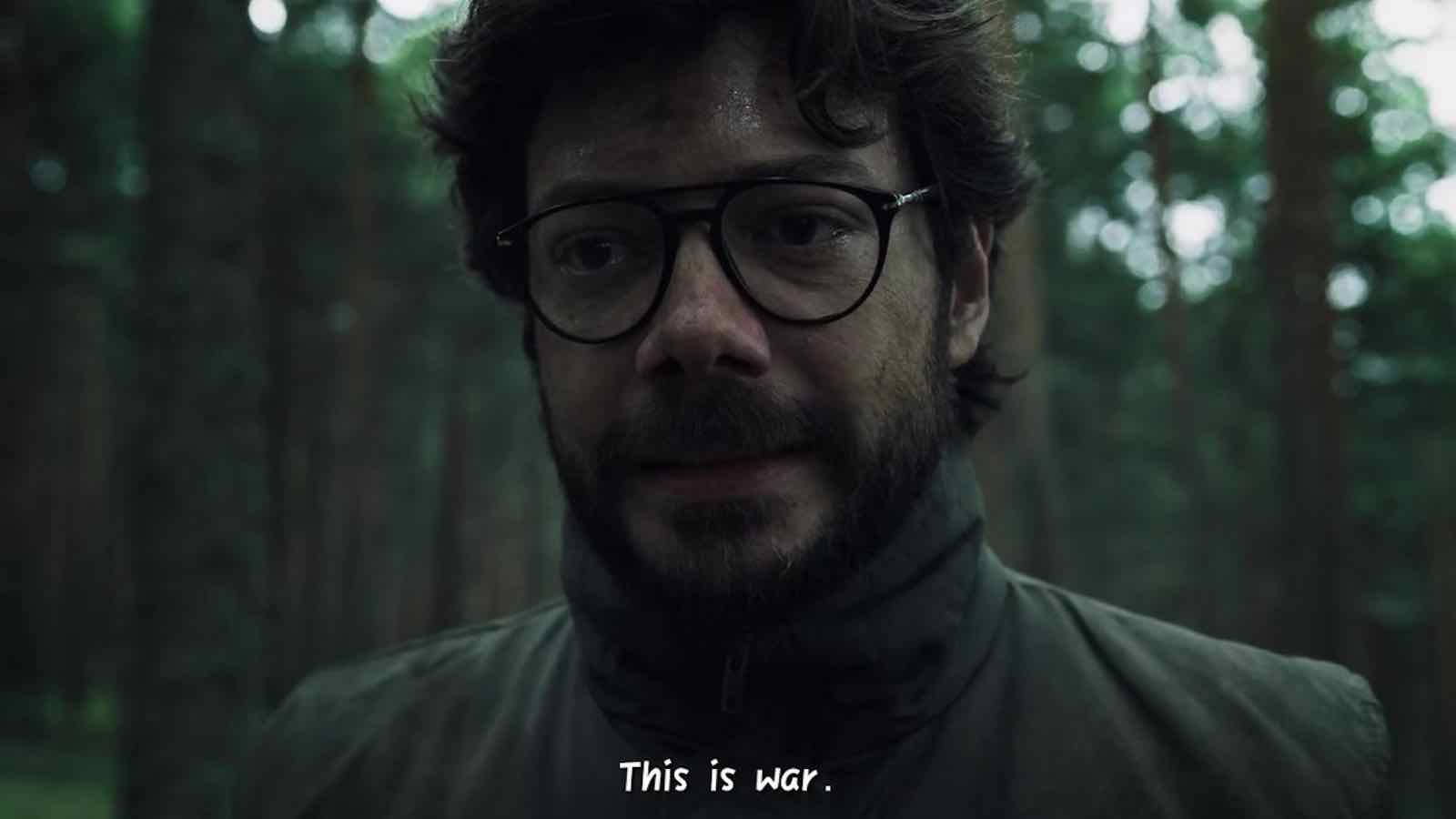 The Professor escapes, Raquel is captured

Respect to the Professor though for keeping it together after thinking Raquel (Itziar Ituno) was killed by police. He and Marseille (Luka Peros) trick police into thinking The Professor hasn’t gotten away, but it still has taken its toll on The Professor. Meanwhile, Raquel is brought to the police tent outside the Bank of Spain.

We already knew there was a history between Raquel and Alicia (Najwa Nimri), but it comes out as Alicia interrogates Raquel and her role in the heist. Threatening her with never seeing her daughter again, and less police time, she initially decides to call her family to warn them that police know where they live and that they’re coming. 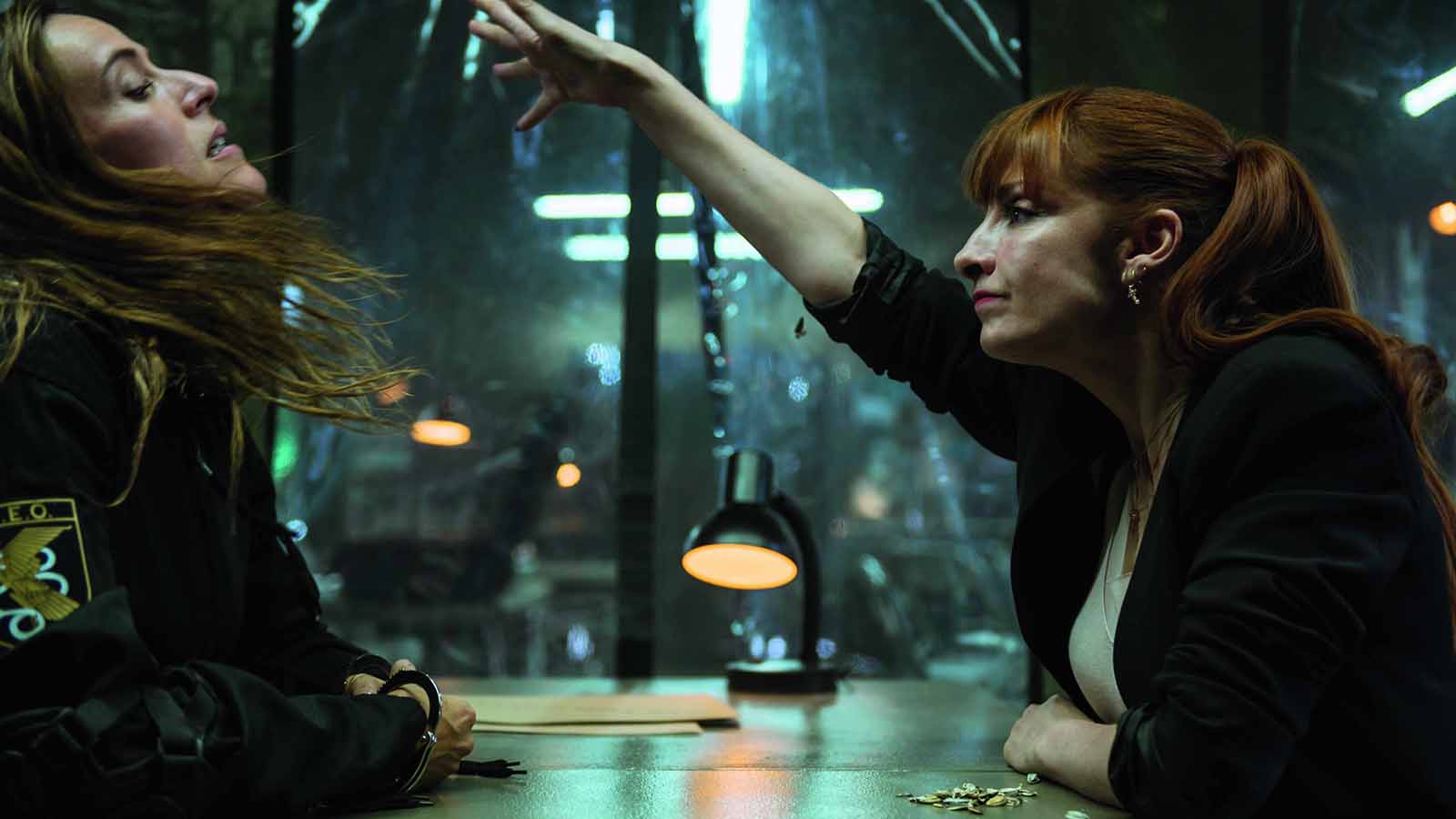 The Professor gets back in contact with the gang, and the minute Tokyo calls saying she’s in charge, he’s pissed. But she explains the situation, and even tells him that Raquel is still alive, and being held in the police tent. Marseille and the Professor track down the assistant of Colonel Tamayo, Antonanzas (Antonio Romero), and blackmail him into helping them out. But they fit his apartment with fake bombs so if he gets caught, he has an escape.

Wearing the Professor’s watch, Raquel picked up on the message from Antonanzas and chose not to call her family as a warning.

In an attempt to win over control of the situation again, Palmero recruits chief of security at the bank, Gandia (Jose Manuel Poga). Helping him break out of his handcuffs by dislocating his thumb, Rio (Miguel Herran) can’t bring himself to stop him from escaping.

Running to the panic room with communication tools and ammo, Gandia locks himself away and makes contact with police. But before he does so, he attempts to suffocate a now conscious Nairobi with a pillow, and hangs Helsinki from the ceiling. Both are saved by their fellow thieves, and Gandia. 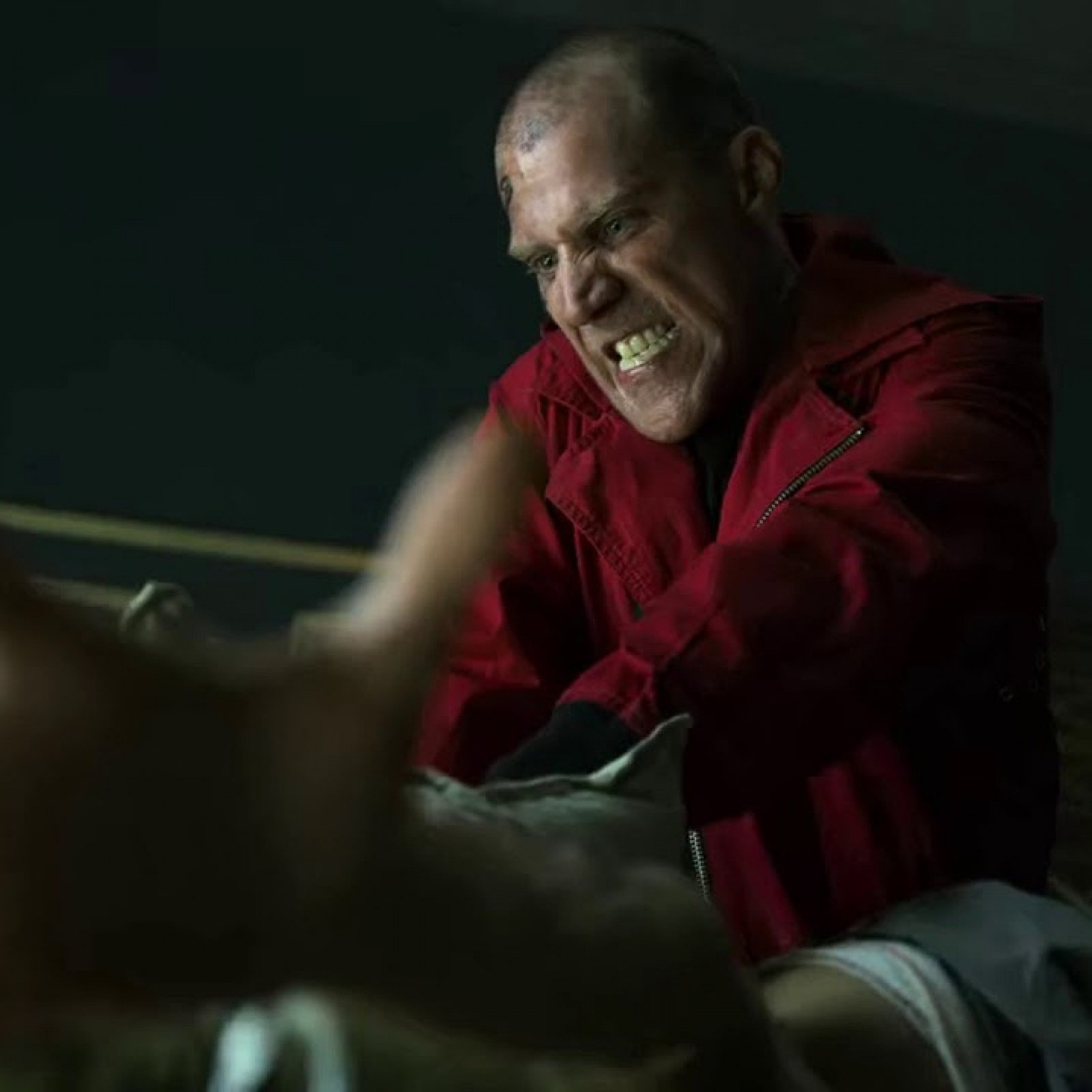 Causing more panic, Gandia throws a grenade into an elevator Rio and Denver (Jamie Lorente) are in, but the two manage to stop the explosion from killing them. Outside of Tokyo and Nairobi, the gang gets into a shootout with Gandia after everything that’s happened. Escaping through a duct, Gandia ends up in the same room as Nairobi and makes her his new hostage. 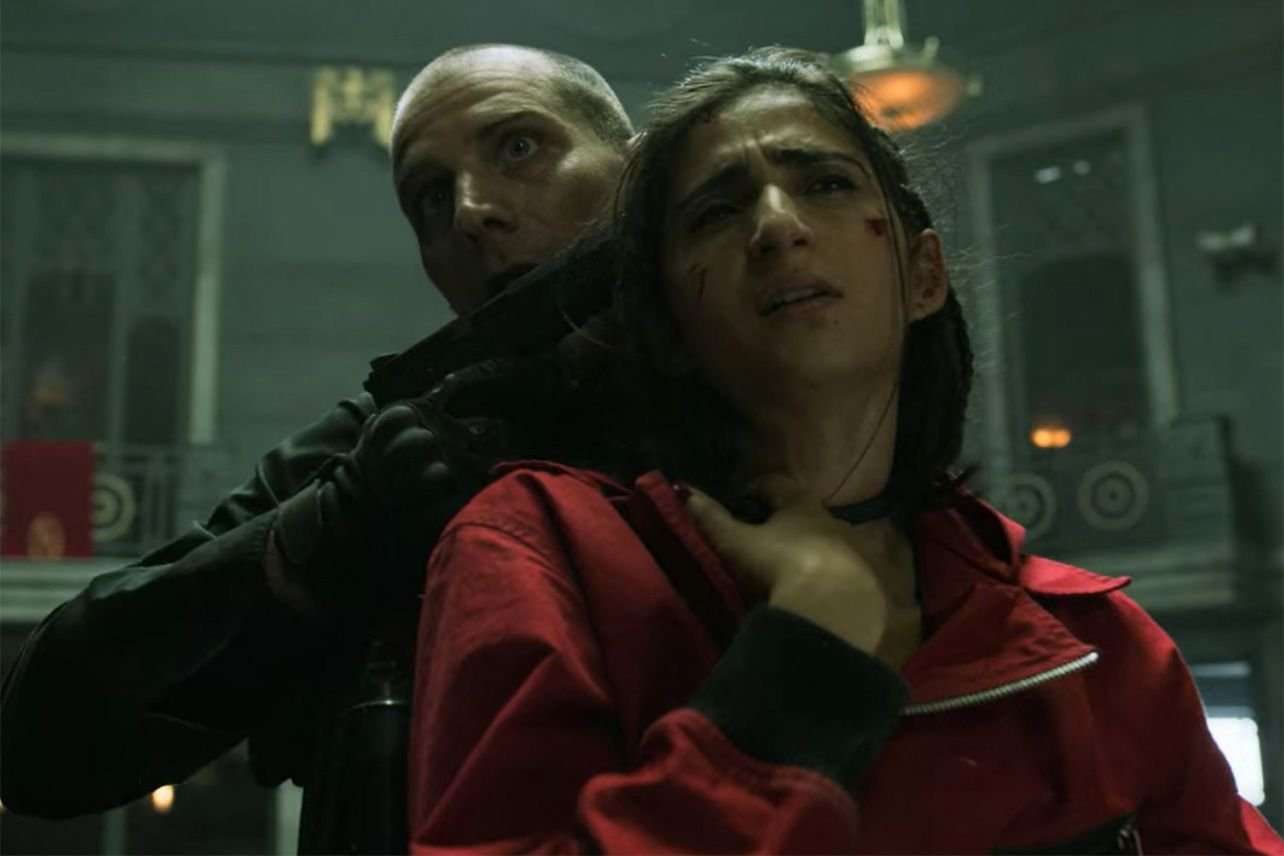 The death of Nairobi

While in Gandia’s custody, Nairobi gets her head shoved through a hole in the door, with her hands tied to it. Once he was ready to make his grand escape, he used her as a human shield, knowing no one would dare to shoot her as he left the bank.

But instead of letting her go, Gandia shoots her point blank in the head, killing her instantly. In retaliation, Denver throws a grenade, and knocks Gandia out so he can’t escape. But the damage is done. Nairobi is dead. 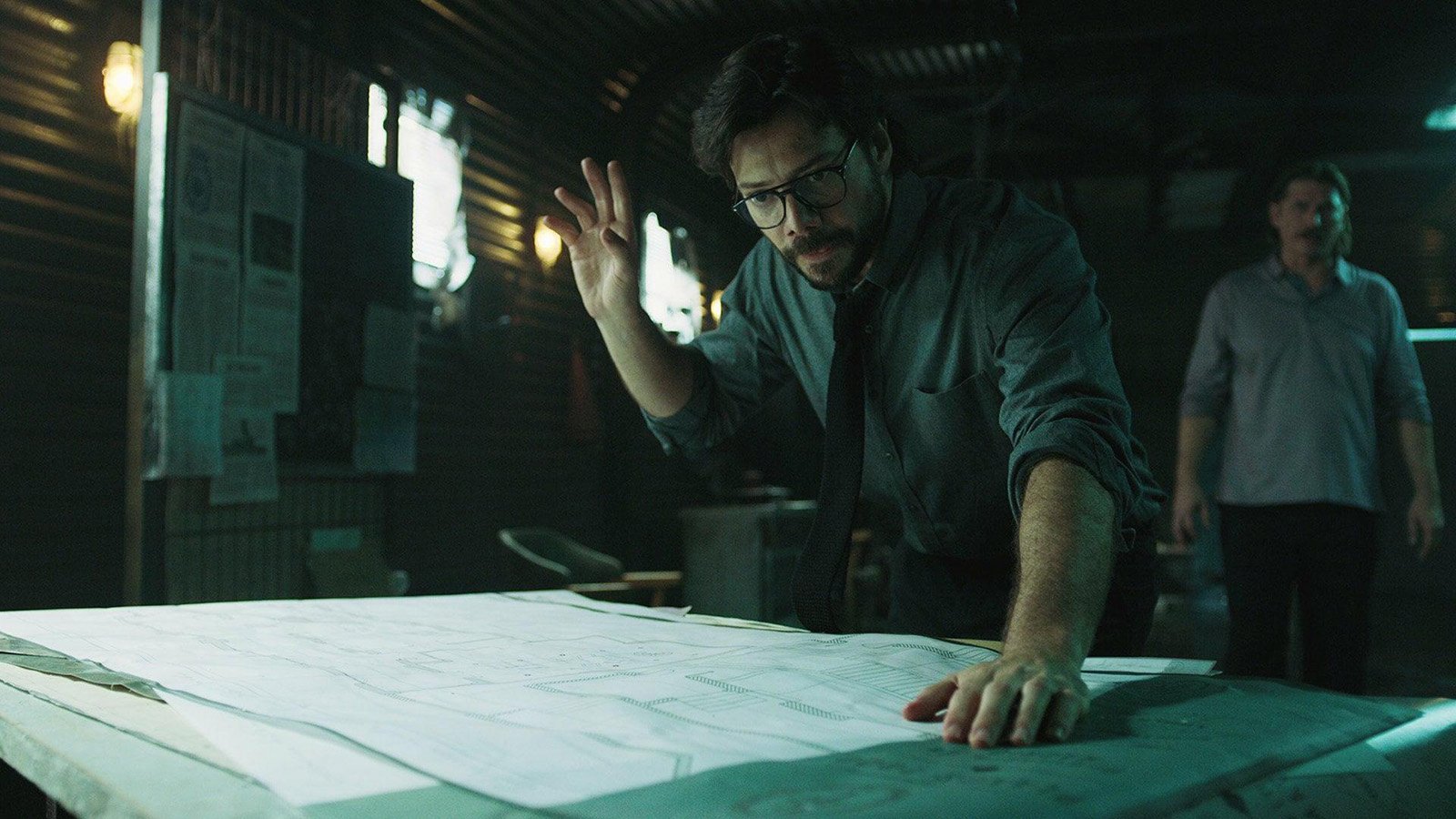 But while all this madness is going on, The Professor is still using his outside contacts to get work done on the outside. He tries to find the panic room on the blueprints, but it’s nowhere to be seen. Thankfully, he figures out that it’s behind the governor’s bathroom through some useful deducing.

Meanwhile, they’re still planning a way to get Raquel out of police custody and back on their side. The best way to do so? Show the illegal actions of the police when it comes to Rio’s torture and Raquel’s capture. Sending Marseille to Algeria to get footage of Rio’s torture, the plan went into place. 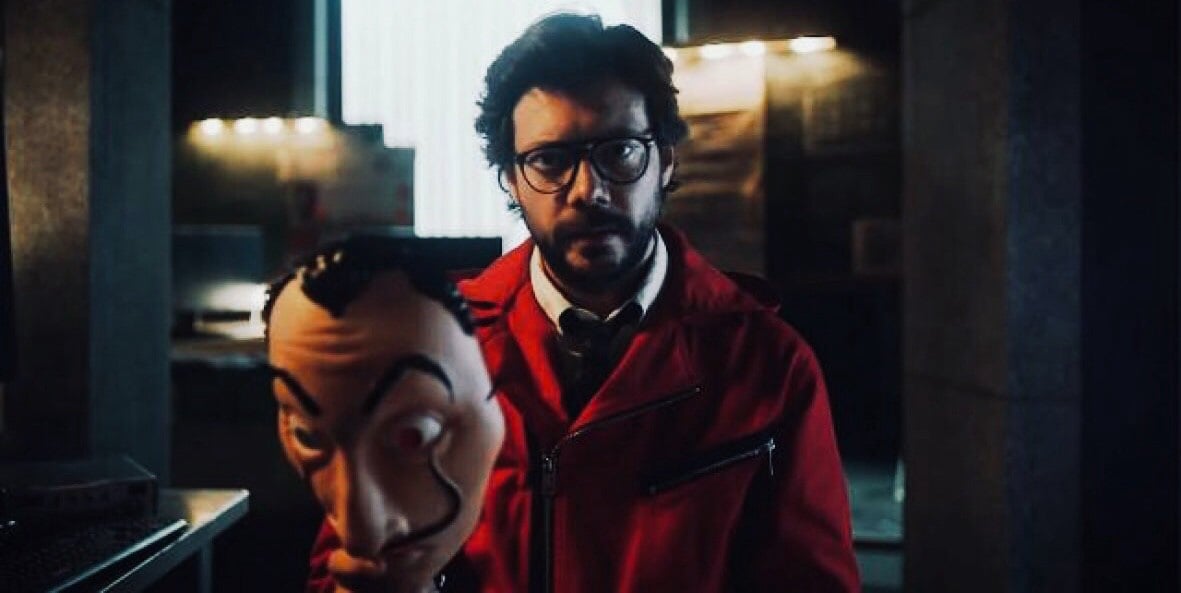 Releasing the torture footage, police were forced to make a statement denying these allegations, but at the same time as their press conference, they broadcasted an interview with a man who was involved with the torture. By default, police had to call off their attack on the bank.

Then, the Professor went on camera to not only corroborate the story about Rio but also tell everyone about Raquel’s illegal capture in the tent outside the bank. The Ministry of the Interior takes over Raquel’s custody, and she’s removed from the tent. 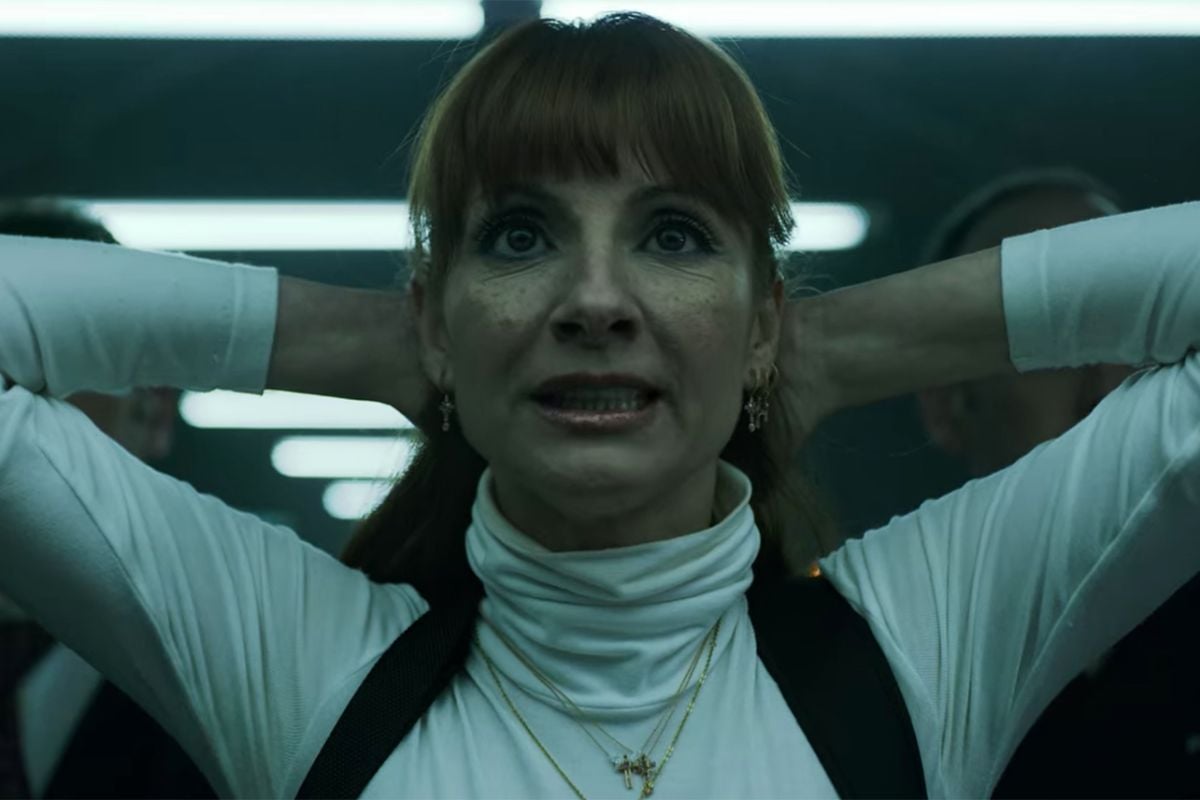 Pissing Alicia off to a new high

Alicia is not happy at all with how this case is going, on top of the fact that she’s forced to take the bullet about Rio’s torture since she led it. During a press conference confessing this, she throws the police under the bus with a variety of accusations about the crimes they’ve committed. Naturally, she’s fired after this, but Alicia was already screwed.

Now, she is ready for revenge on her own. Going to Antonanzas, Alicia finds out he’s the mole and gets the Professor’s license plate number after looking at security cam footage. From there, she’s on the hunt to find her hideout.

Meanwhile, the Professor is teaming up with outside help to get Raquel out of custody and back in his arms. His group captures the transport that is taking Raquel to the courthouse, and builds a tunnel from the parking garage where they catch her to a restaurant far away. 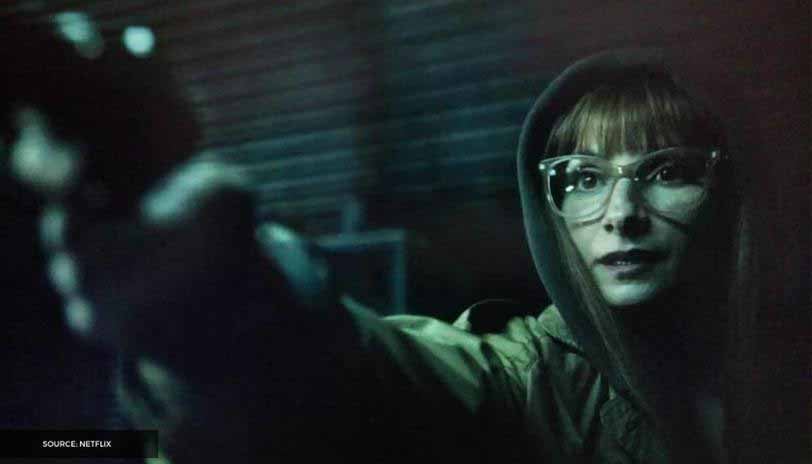 Tricking police into thinking Gandia requested a helicopter, the Professor brings in his own that has Raquel on it, in police SWAT gear. Staging a scene that looks like Gandia is fighting on the roof, Raquel is able to sneak into the bank with the gang, as they cheer “For Nairobi!”

But as the Professor is celebrating, he turns around to see a pissed off Alicia pointing a gun at him. She finally tracked him down to his hideout, and we’re left with the knowledge that he’s most likely screwed. What happens next, we’ll have to wait until season 5 to find out.