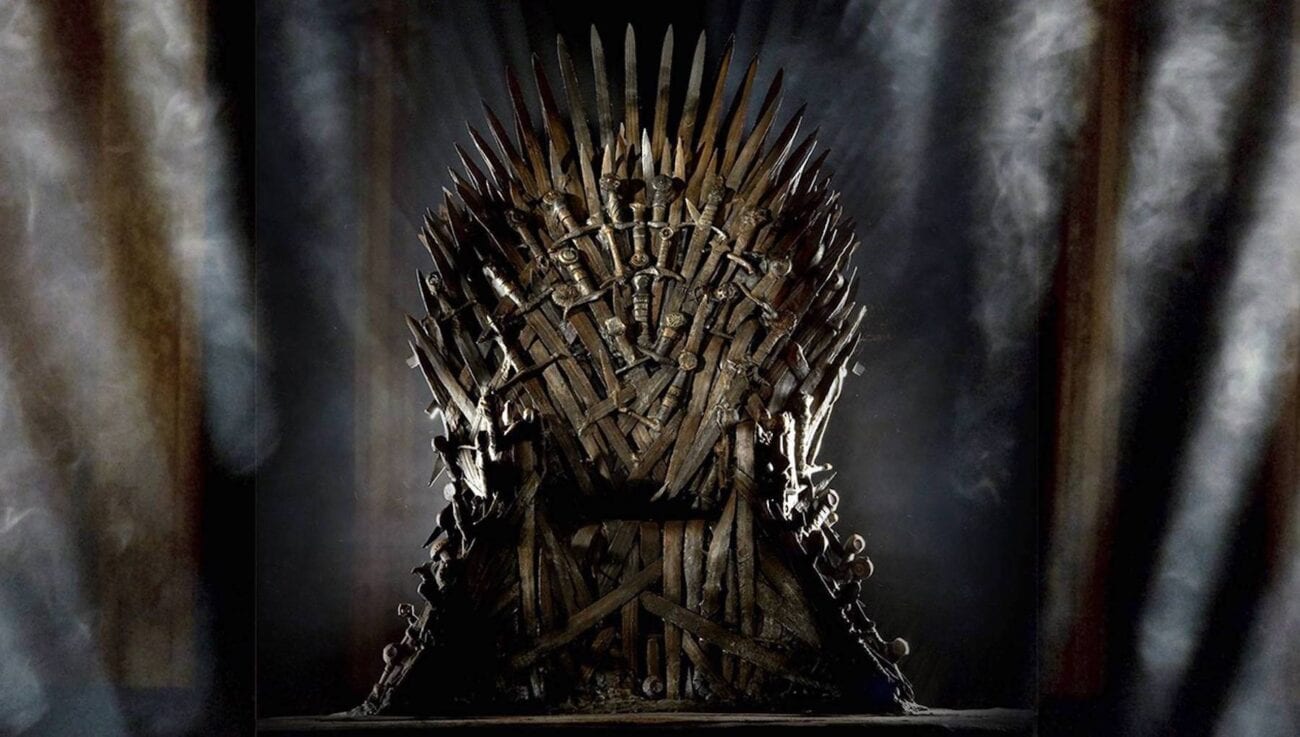 What BTS details does the new ‘Game of Thrones’ book reveal?

If you’re a diehard Game of Thrones fan, you can relate to the millions of people around the world who were devastated when the epic HBO hit came to an end in 2019, and possibly the many more who were disappointed with the ending.

Luckily, Penguin recently released Fire Cannot Kill a Dragon: Game of Thrones and the Official Untold Story of the Epic Series, an in-depth, behind-the-scenes look at the show. So if you’ve been searching for your Game of Thrones fix, search no further. 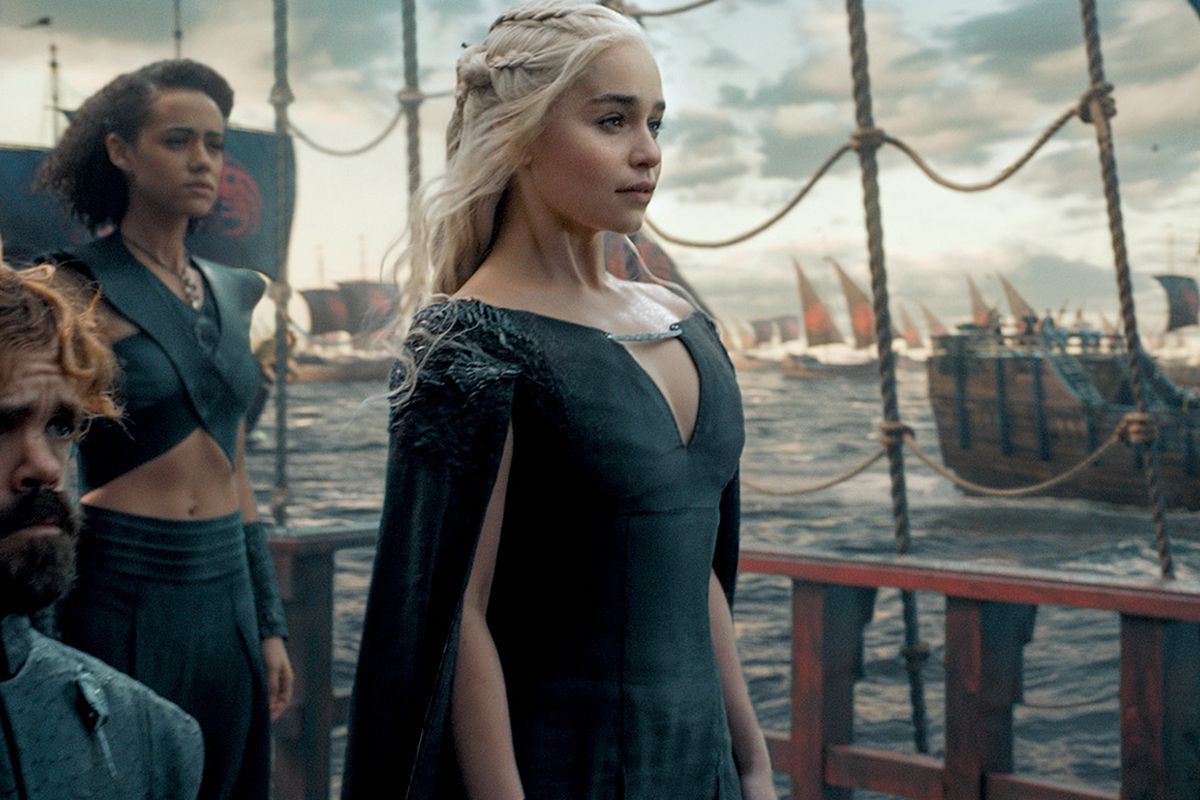 Written by Entertainment Weekly’s James Hibberd, who was on set while a ton of Game of Thrones episodes were filmed, Fire Cannot Kill a Dragon has an impressive 400 pages of interviews, behind-the-scenes photos, and much, much more.

In the book, Hibberd recounts the massive amount of detail going into Game of Thrones’s production and, of course, he spilled a lot of tea on our favorite cast & crew. So what are some crazy and exciting things we learned from the book? Here are our highlights. 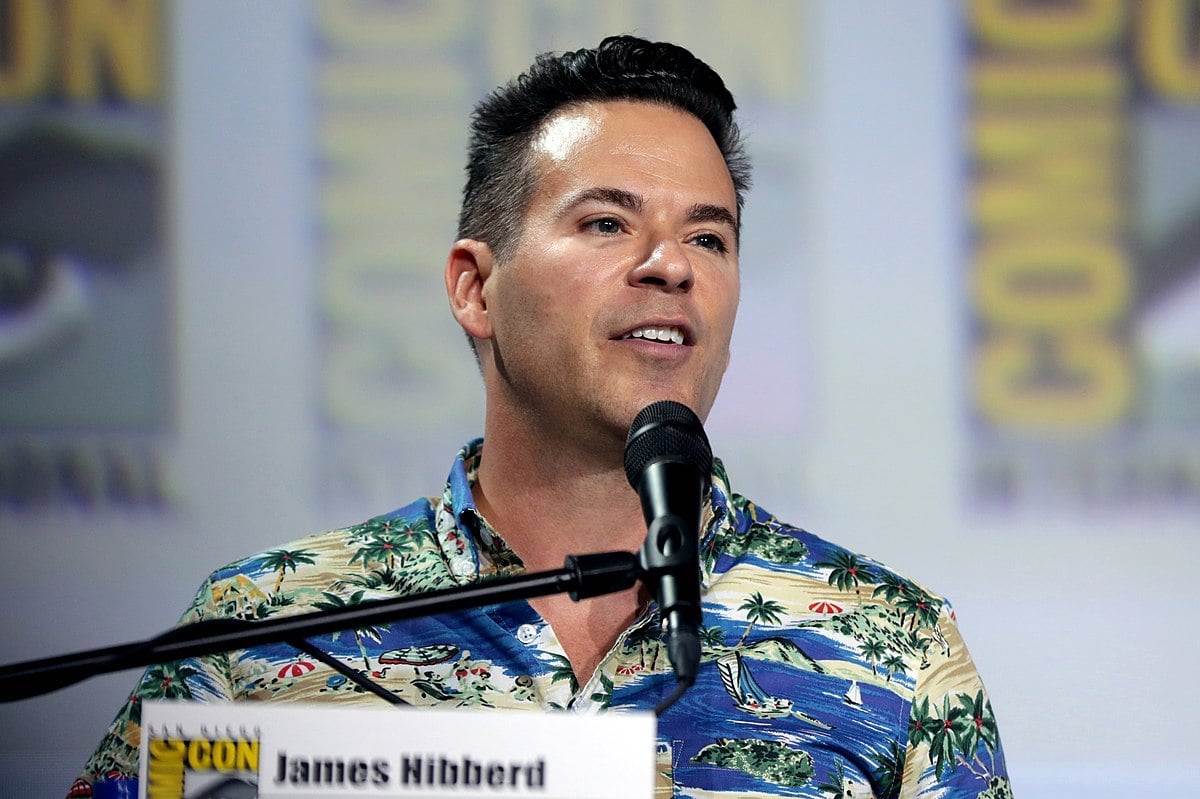 Over the course of Game of Thrones’s run, mixups & mistakes were inevitable. Turns out, some of these goofs made it into the show. In some cases, that was a pretty good thing.

We all remember the epic battle in the season 5 finale, “Hardhome”, during which Jon Snow & The Night’s Watch are tasked with fighting the army of the dead. Apparently, it could have gone a lot differently.

The show’s producers had originally reached out to The Descent & Hellboy (2019) director Neil Marshall to direct the episode. Marshall had directed some memorable battles in the show, including the Battle of Blackwater Bay in season 2 and the Battle at Castle Black in season 4, but his schedule didn’t allow him to jump onboard for “Hardhome”. 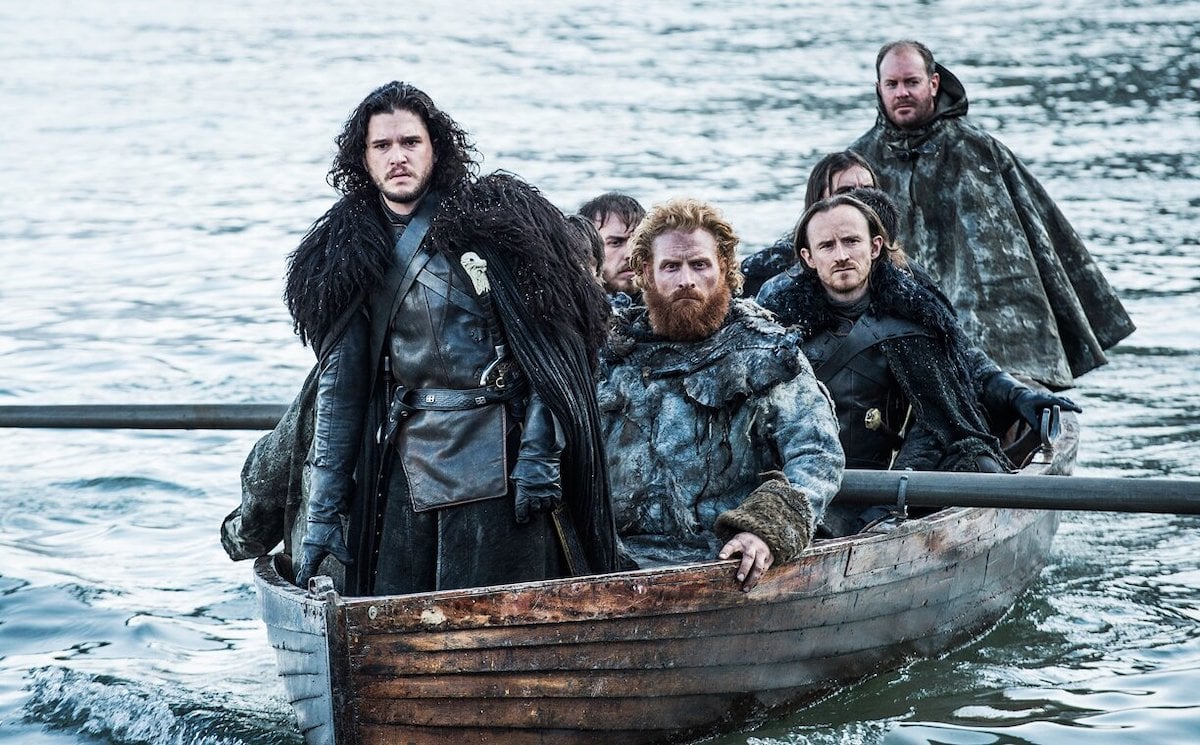 Thus, Miguel Sapochnik swept in to save the day. At the time, it was a giant risk because Sapochnik wasn’t as experienced as Marshall. “It was a trial by fire for Miguel Sapochnik,” Game of Thrones writer Dave Hill recalls in the book. “It was: ‘Here’s our biggest action sequence for season five. We all love it. You don’t know all the actors or the crew. Make your magic happen.’”

“But Miguel is a super prepper,” Hill continued. “He came in with a plan of attack. It was all hands on deck for that month, and it came out even better than what we had on the page.”

How did Sapochnik change the scene up? At first, the battle was supposed to take place on a huge beach. At the last minute, the showrunners decided the undead army would have won too quickly that way, so Sapochnik came up with the brilliant idea of the palisade wall so they could “point the camera in almost any direction”. As far as we’re concerned, that worked pretty darn well! 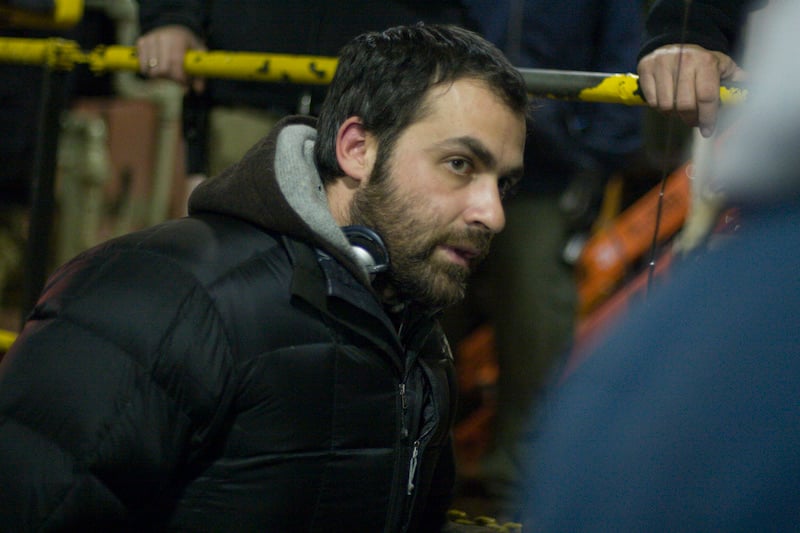 Believe it or not, the end of the episode where the Night King lifts his arms and brings back to life all the dead Wildlings was also an accident. “The silent ending in that moment came from a happy mistake,” said Sapochnik. “Someone forgot to extend the music over that part of the rough cut, and I found it much more powerful without music.”

Speaking of happy mistakes, the book also reveals Sansa Stark’s iconic final shot in “Battle of the Bastards” where she walks away from the cage where Ramsay is screaming in agony with a little smile on her face was also improvised.

Dave Hill commented on that scene: “That smile Sophie gave as she walked away was all her,” he said. “That wasn’t in the script. We saw it in one of her takes, and David and Dan were like, ‘Oh, that’s great…’” 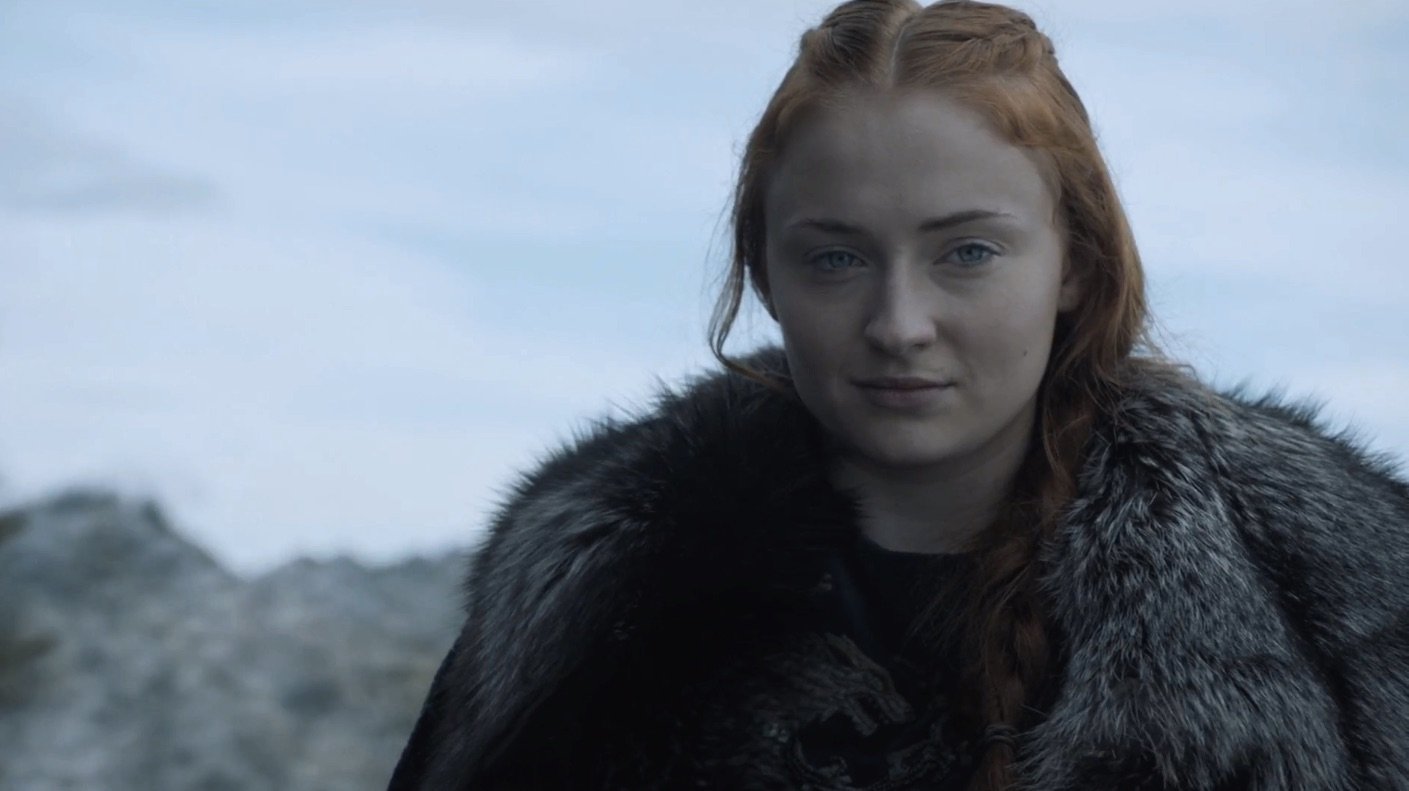 Behind the scenes romances

One of the things we love so much about Game of Thrones are the romances. And, according to the book, a lot of juicy stuff happened off-screen, as well as on.

According to Fire Cannot Kill a Dragon, Jaime Lannister & Brienne of Tarth’s relationship was pretty much the same off-screen as it was on. In the new Game of Thrones book, Gwendoline Christie, who played Brienne, recounts the day they met: 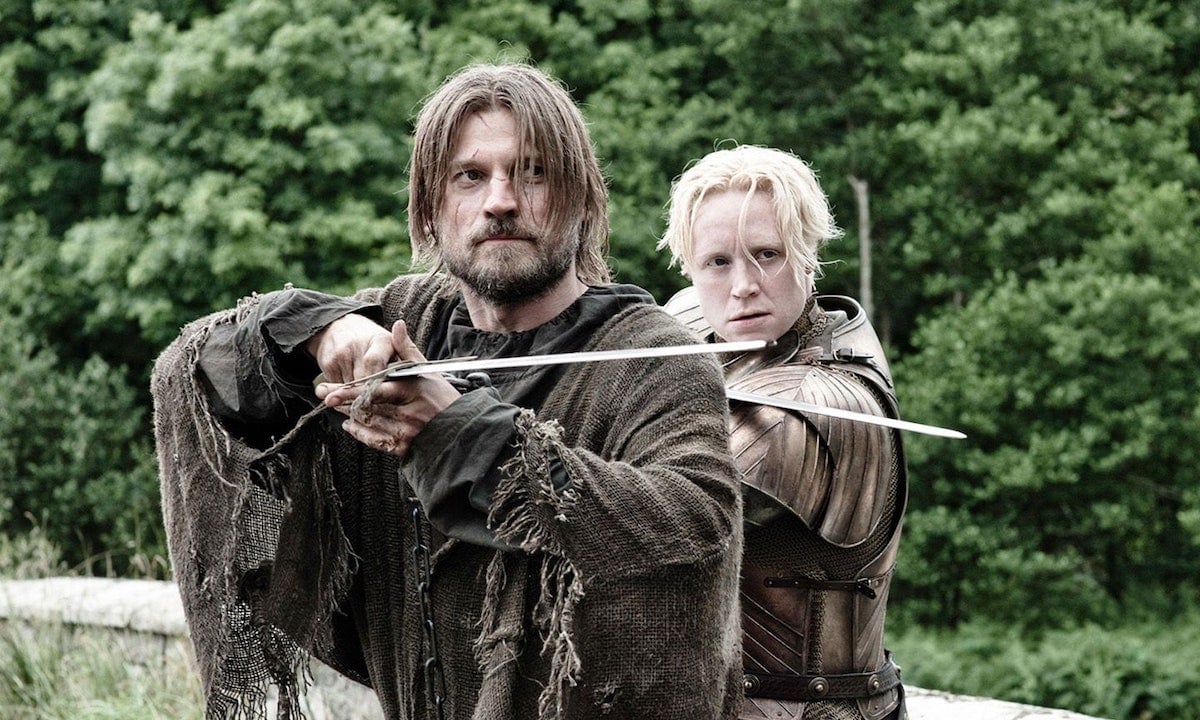 “On one of my first days of filming, I was told Nikolaj was in the makeup truck and that I should go and say hello. I didn’t want to because I felt so shy. They said, ‘Don’t worry, I’m sure he’ll be nice.’ So I walked in and I said, ‘Hello, my name is Gwen…’ and then ‘I’m playing Brienne.’”

She continued: “He just looked me up and down like I was an alien from another planet, possibly a pile of manure, and then said: ‘Oh, so that’s you, is it?’ I was really uncomfortable. I said, ‘Yeah.’ And he said, ‘Okay…,’ and then he went back to looking at himself in the mirror. I felt awful.” Awkward! 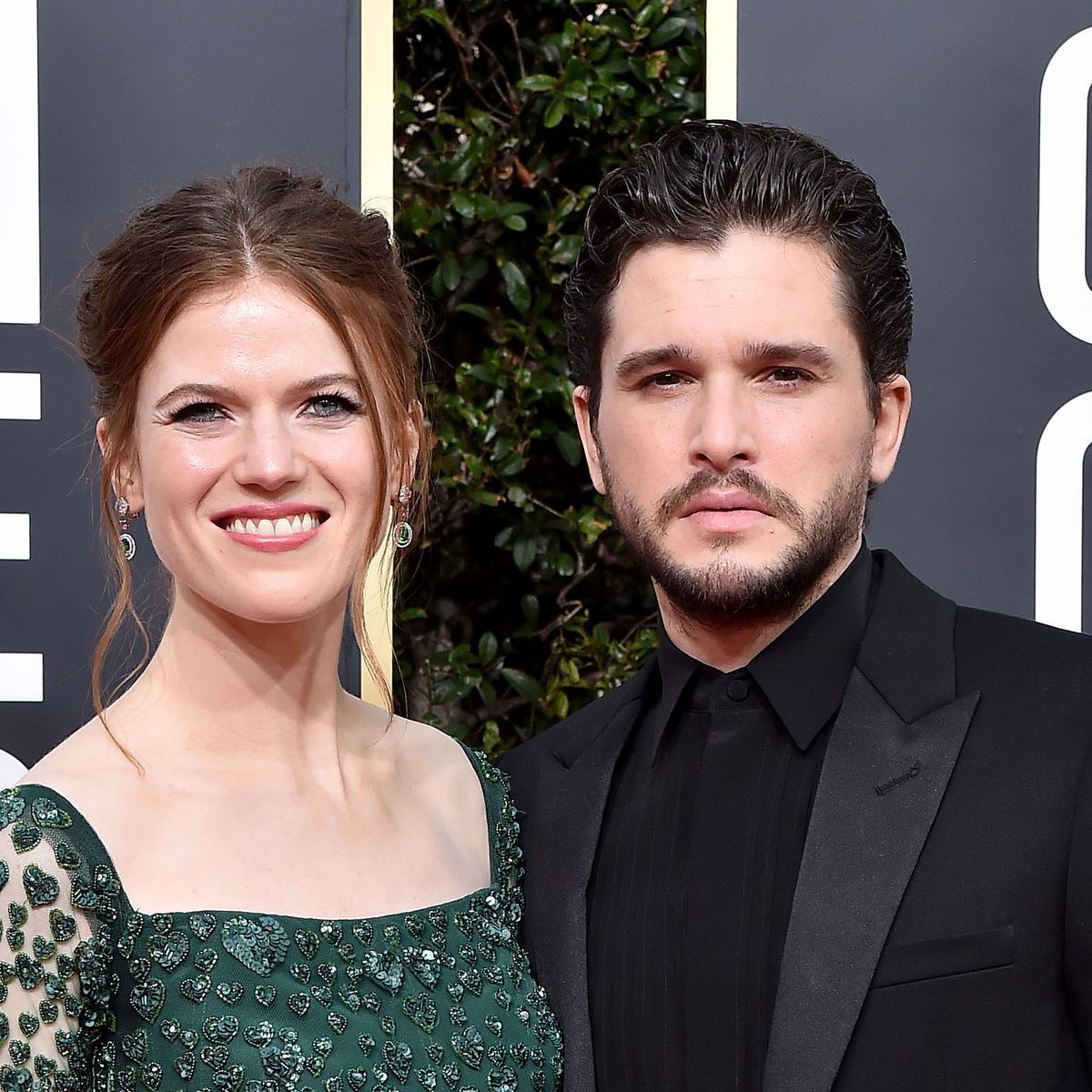 One Game of Thrones couple we love is Kit Harrington & Rose Leslie, who we learned didn’t actually meet until their characters, Jon Snow & Wildling Ygritte, met. Harrington recounts the moments leading up to their meeting: “I googled Rose when I found out she was playing the part. Then I met her in a costume fitting – so the first time I ever saw Rose she was dressed as Ygritte.”

Harrington continued: “She offered me a ginger biscuit, which is very sweet. I was completely enamored. I was also bowled over by her portrayal of the character, which suggested brilliance to me.”

David Nutter, who directed the actors in their first scene, corroborated their on-screen chemistry. “I was the director the first day they met each other. The first scene we shot was when the Night’s Watch take out the Wildings and he put the sword to her neck and he’s about to kill her. Kit told me it was the happiest day of his life. You could tell there was a real spark.” 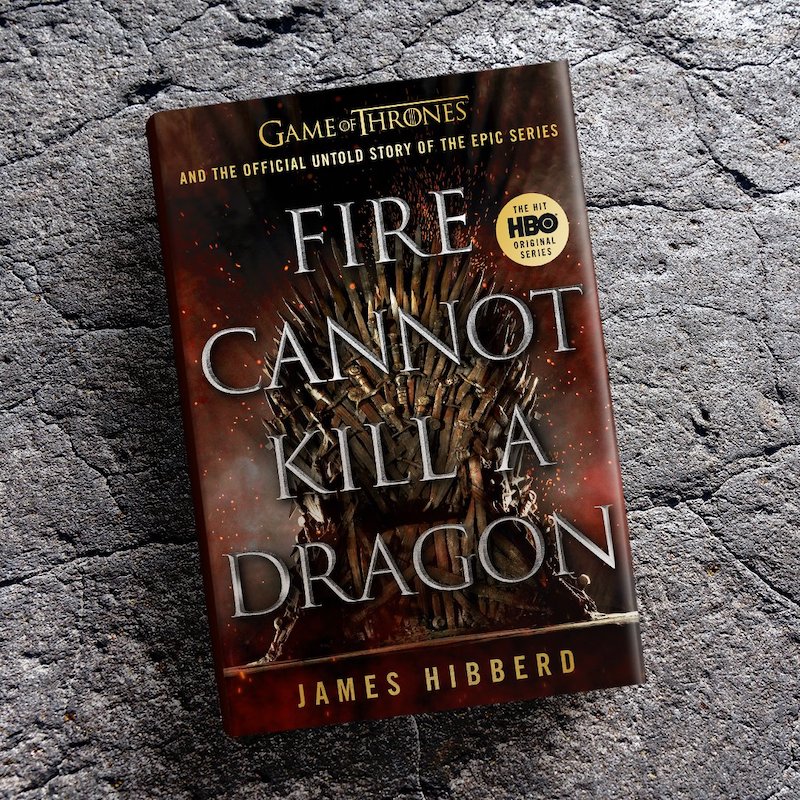 With its impressive page count, it’s no surprise the new book offers a lot of other cool tidbits. Did you know Game of Thrones was shot where the RMS Titanic was built? Neither did we! Veteran actors Diana Rigg & Jonathan Pryce were basically royalty on set given their acting resumes.

In addition, Fire Cannot Kill a Dragon gives some interesting insight into the books’ future, including how George R.R. Martin might handle Hodor’s death in the upcoming novels.

Whether or not you’re a Game of Thrones junky, it’s impossible to deny that this book promises some pretty exciting info. The book is now available on Amazon, and we definitely recommend you snag a copy ASAP!