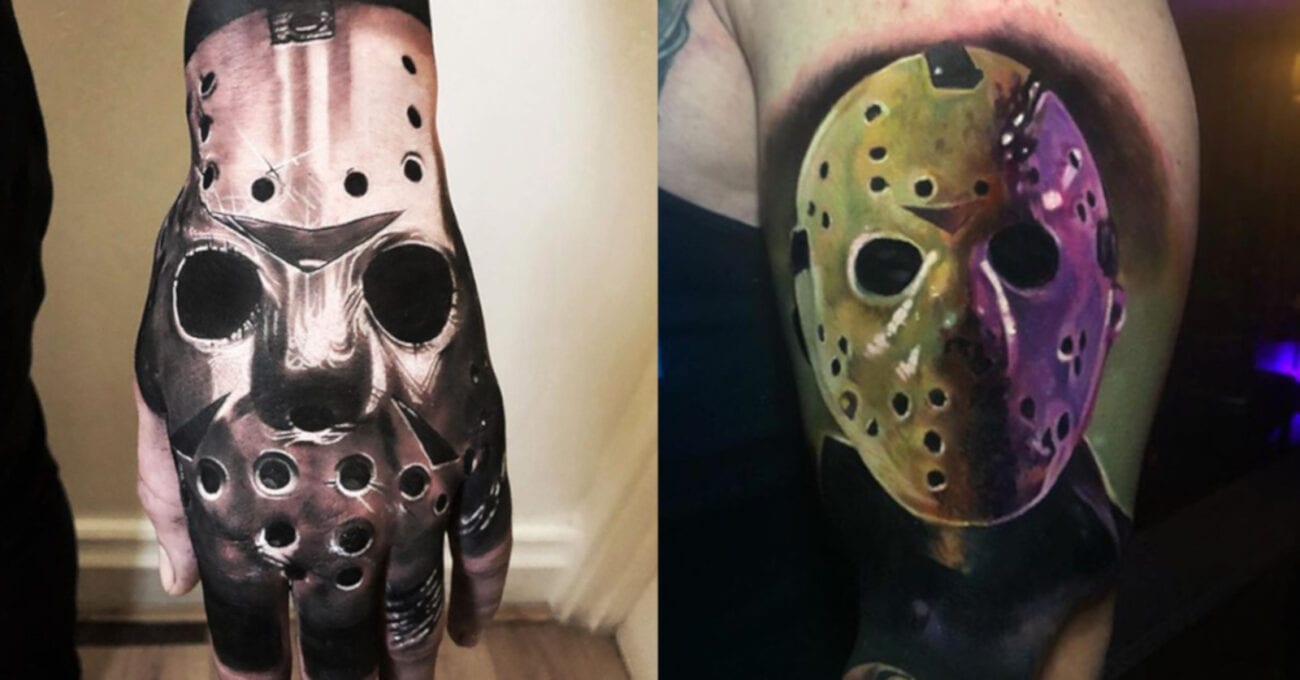 ‘Friday the 13th’: The best tattoos inspired by the movies

Little do most people outside of the tattoo world know, Friday the 13th is the day for tattoo specials. Some shops offer small tattoos for a discounted price and crank them out from sunup to sundown, first come, first serve!

However, these discounted Friday the 13th tats are usually little and easy to do. That way, your local tattoo artist can crank out little “13s”, small 8 balls, and diminutive black cat outlines for tons of customers. Therefore, if you’re looking to get a bigger piece done, today’s not your lucky day.

Friday 13th Taster 💀
We will have a flash day on Friday 13th! First come first served, designs will be tattooed once only!
Stay posted to see the rest of the designs up for grabs! 🕷#Friday13th #Friday13thTattoos #Friday13thFlash pic.twitter.com/cVV11BVZj4

We’ll let you in on a little secret, though: a lot of tattoo artists are horror movie buffs. Ask them to do a horror sleeve or a big Jason Vorhees portrait, and you’ll be sure to put a smile on their faces! Heck, you can even schedule an appointment with them to do a big, intricate tribute to Jason as you’re getting a small Friday the 13th piece done (after all, the easiest way to talk to a tattoo artist is when you’re in their chair).

As a testament to the tattoo world’s love of everything horror, here are some of the best Friday the 13th-inspired tats! 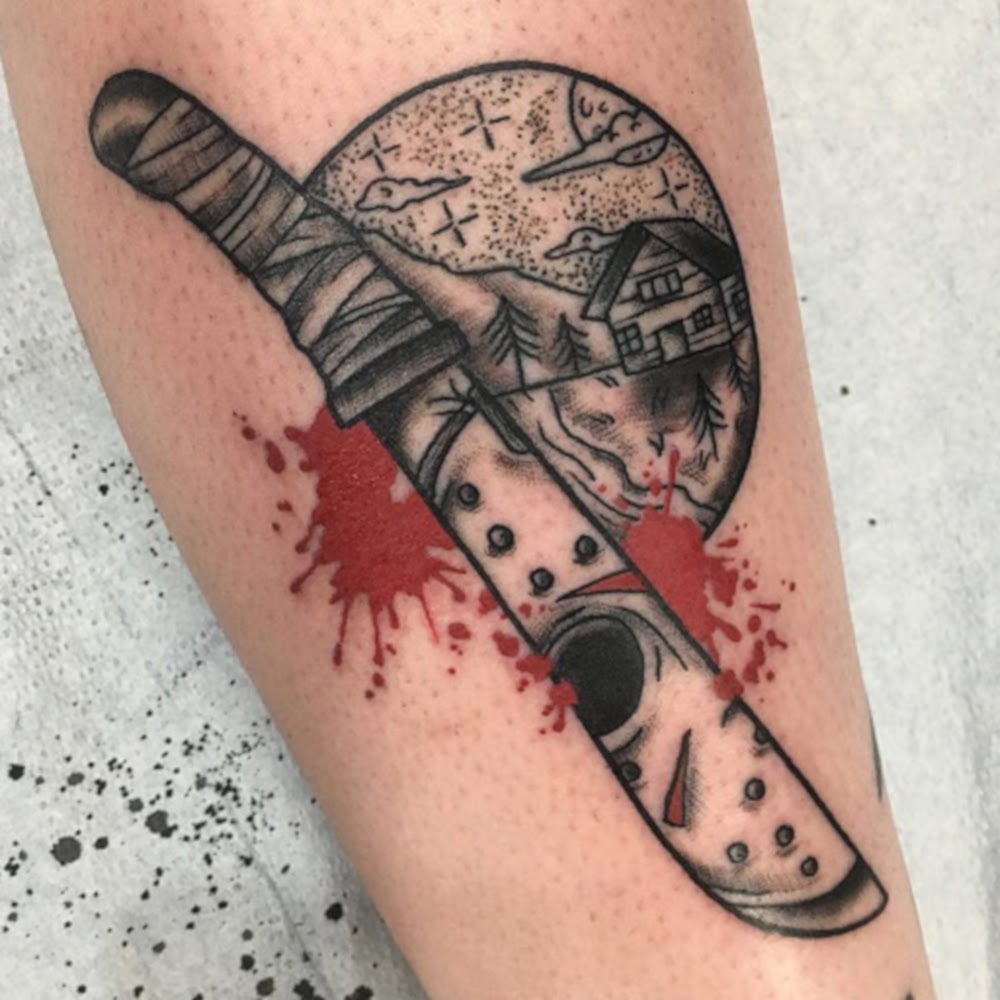 We’ll start off with a tattoo that’s not too fancy. We love Sherlane White’s concept: a circular image of Camp Crystal Lake filled with some fine detail. We’re more impressed with the knife in the front featuring Jason’s infamous hockey mask.

We love the details on Jason, especially the solid work on the blood splatters. If you have a friend who’s into their apprenticeship and just starting to tattoo skin, this is a good concept to give them (that is, if you’re willing to offer yourself up as a guinea pig). 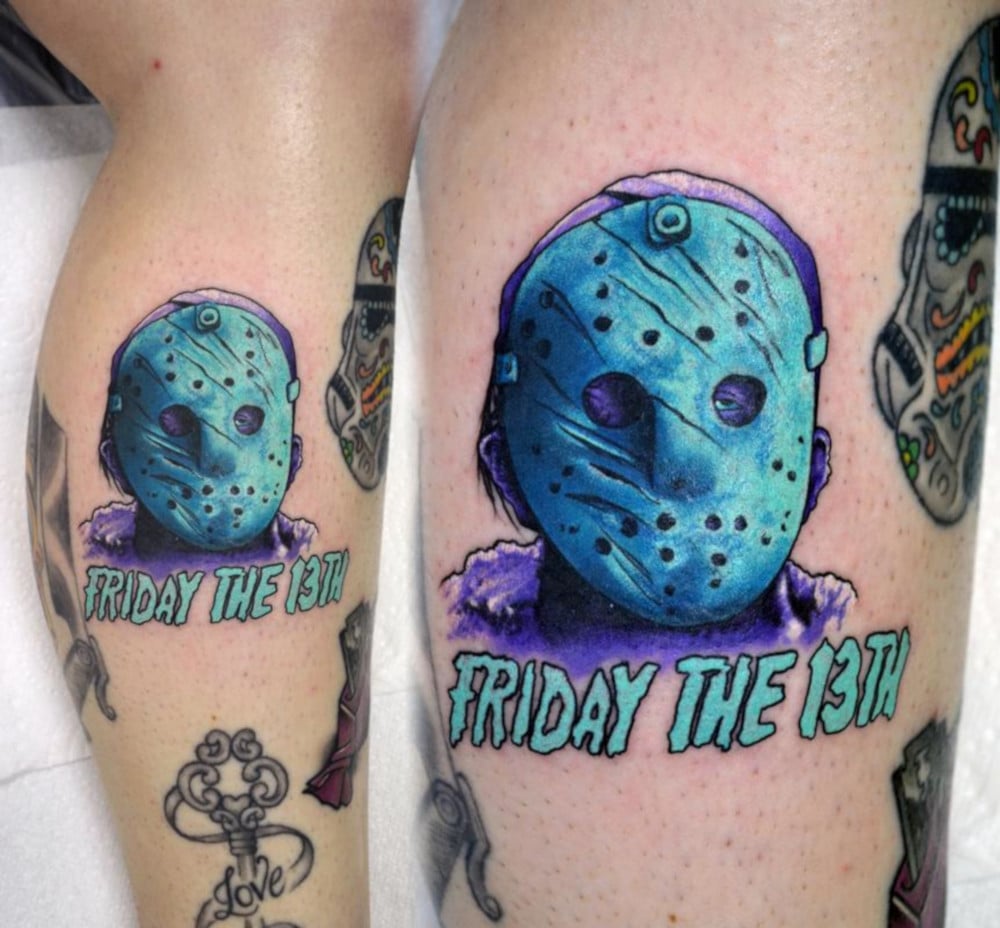 We’re a sucker for packed color and this bright blue Jason Vorhees is no exception. The tattoo, done by Alan Aldred, surely adds a big splash of color to his client’s growing sticker sleeve.

Aldred also enjoyed himself tattooing this one, saying on his page: “I had a lot of fun tattooing this tiny Jason Voorhees from Friday the 13th, 9cm (3 1/2″) tall, filling a small space on the side of a calf. The colour scheme is based off of the 80s video game and the varient of Jason released by NECA as a cool action figure!” 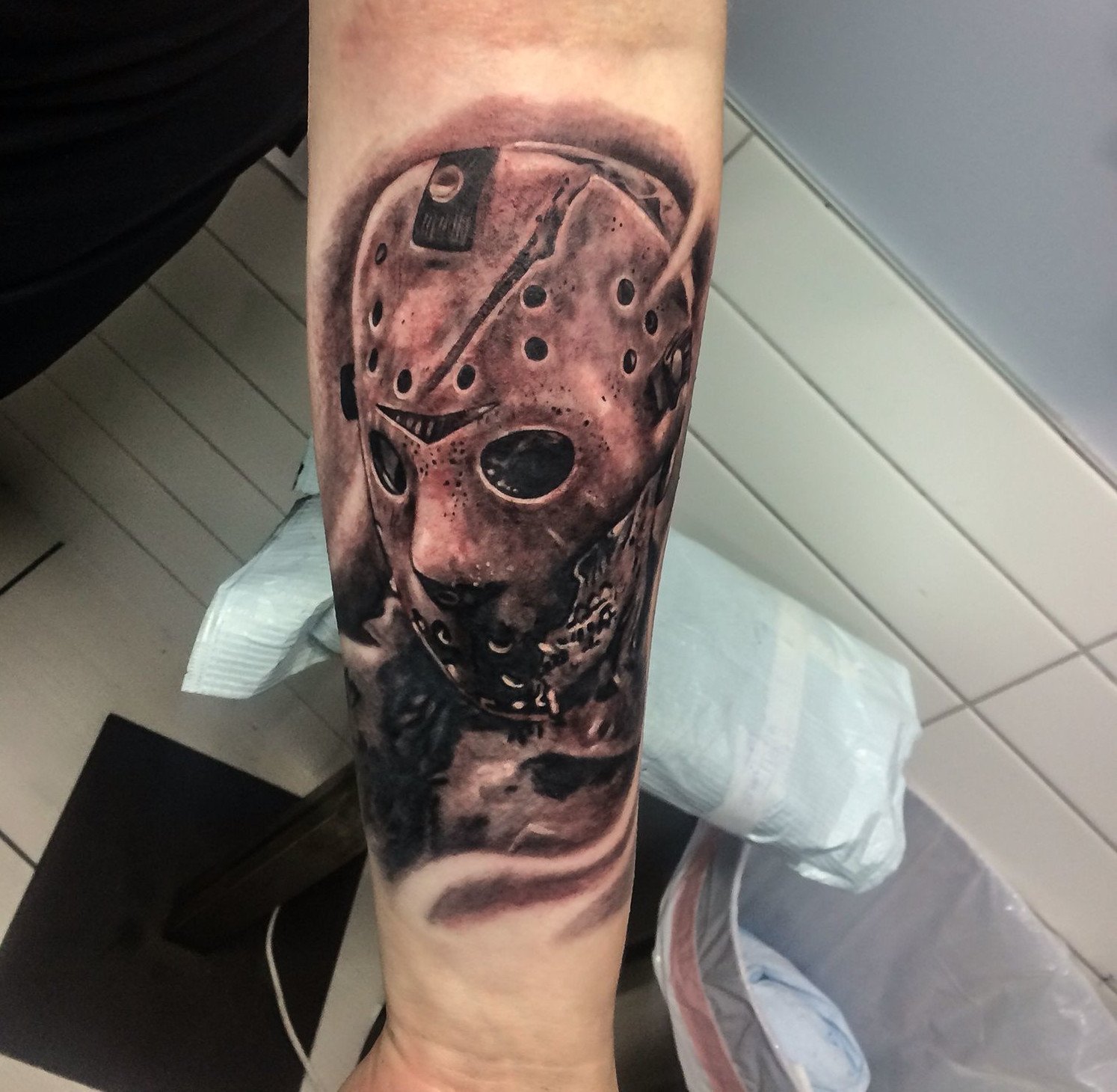 Although it’s pink in the image because it’s new, we’re sure this Friday the 13th homage will look like a black & white photograph when it heals. Done by Richard Vega, we love the light & dark contrast in this black & grey piece. 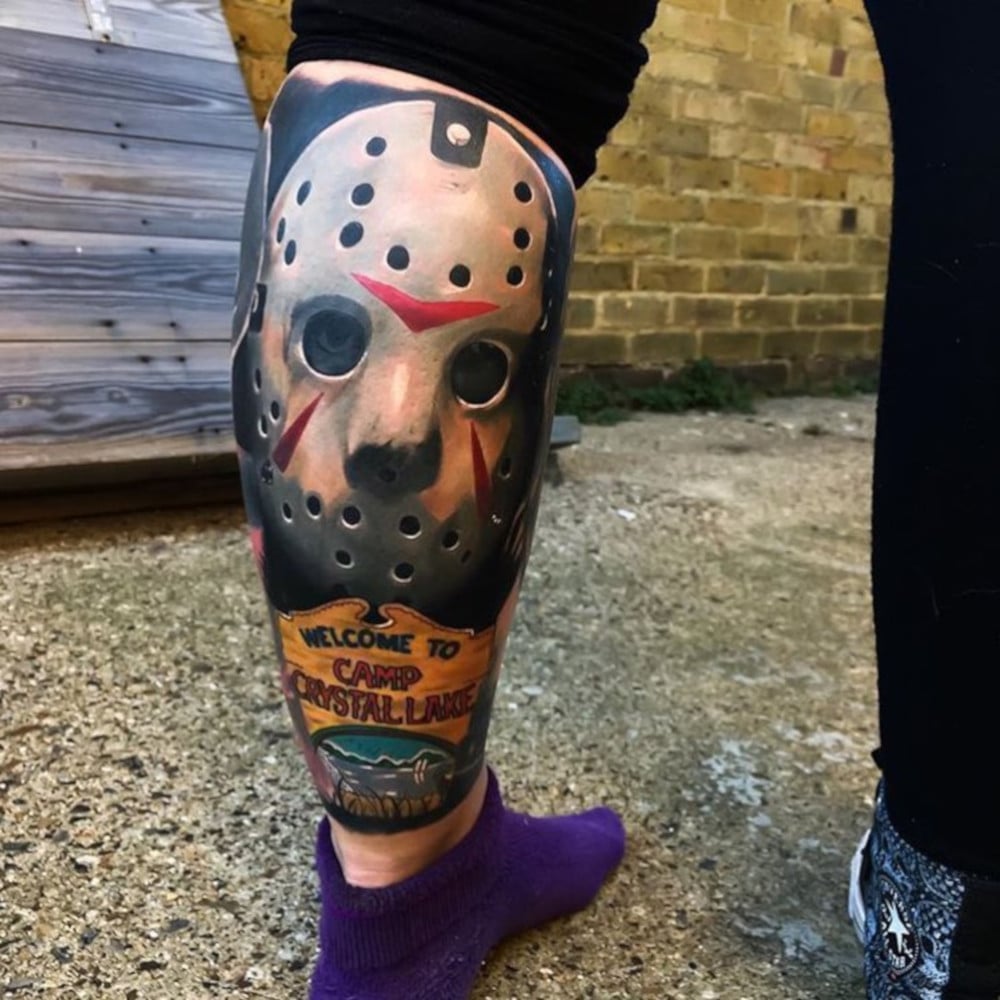 The placement of this color portrait’s elements on the leg are spot on. It looks like you can reach into the tattoo and pull out Jason’s mask! The artist, Jordan Baker @thebakery, is well-versed in tattooing characters, from Disney princesses to the Incredible Hulk. His color work and style, blending graphic novel and neotraditional, is to die for! 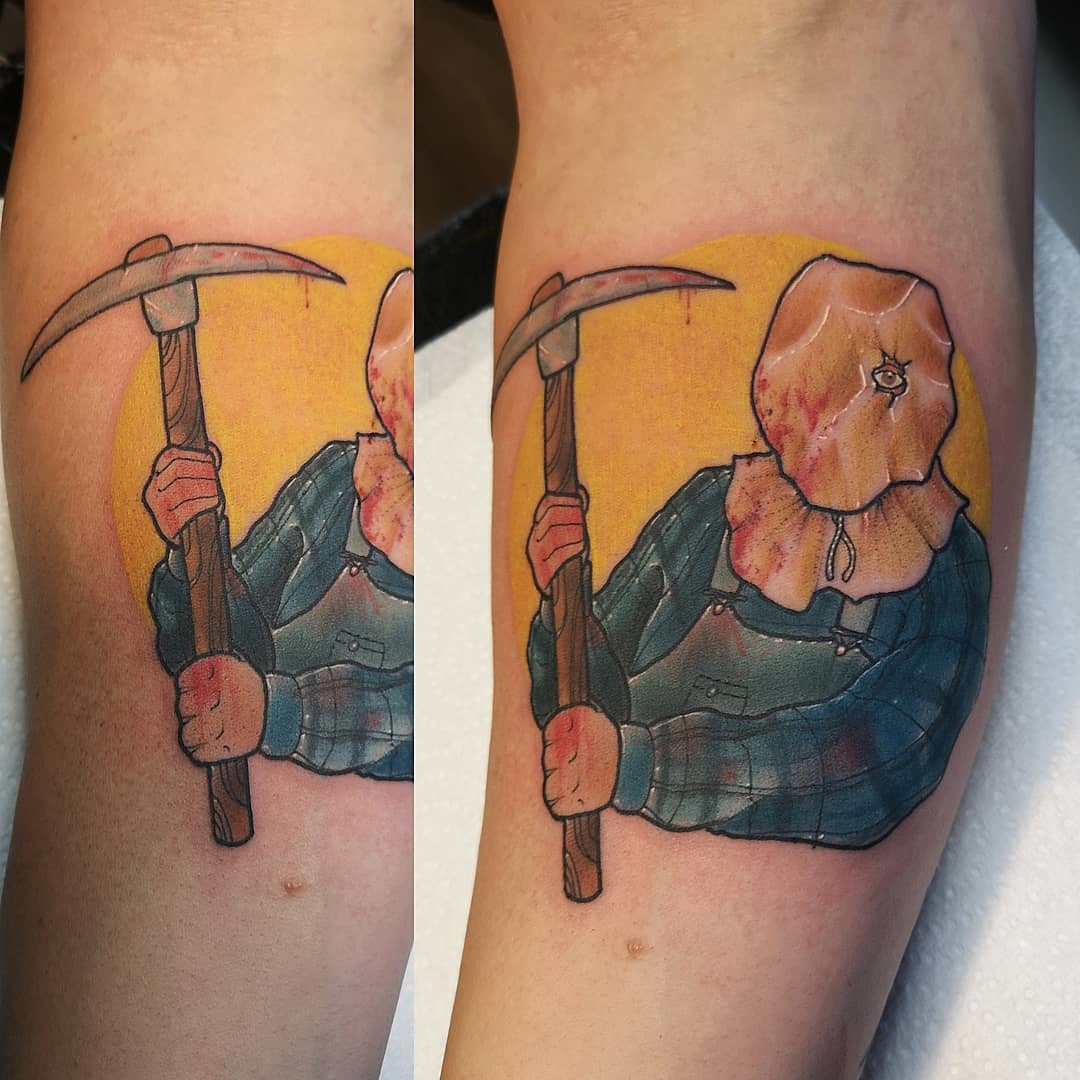 Jason without his mask

Are looking for a Friday the 13th piece, but don’t want to be like everyone else with a Jason tattoo? This simple neotraditional piece by Nicole Reid could give you some inspiration. The simple but solid piece stands out for its unique design and use of color. 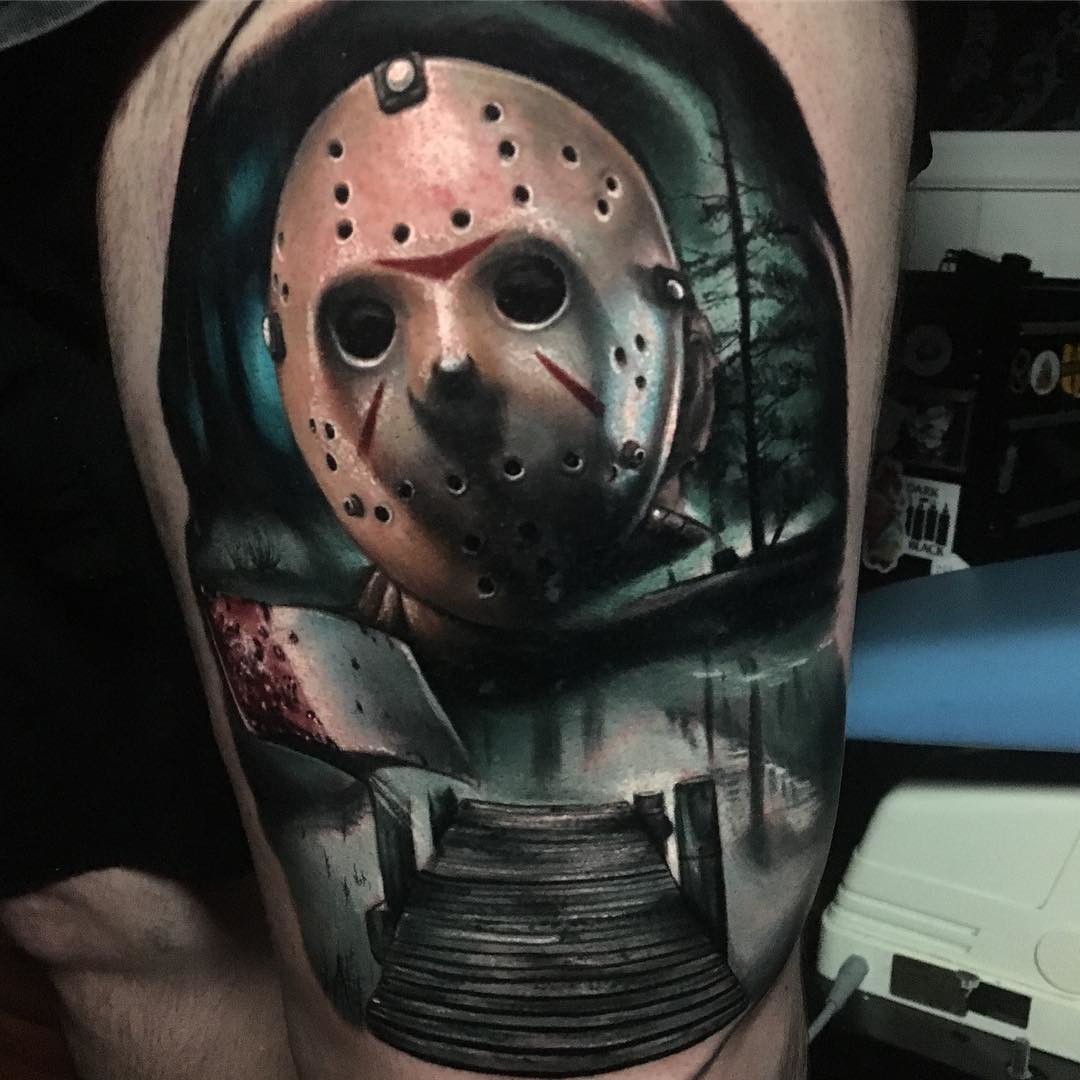 If you want a Friday the 13th piece that looks like Jason’s going to jump up and hack your friends into bits, this Andrew Smith color portrait is the way to go. We’re in love with the muted blues & greys, the silvery quality to Crystal Lake, and how the red on Jason’s hockey masks stands out. It’s the little details that count! 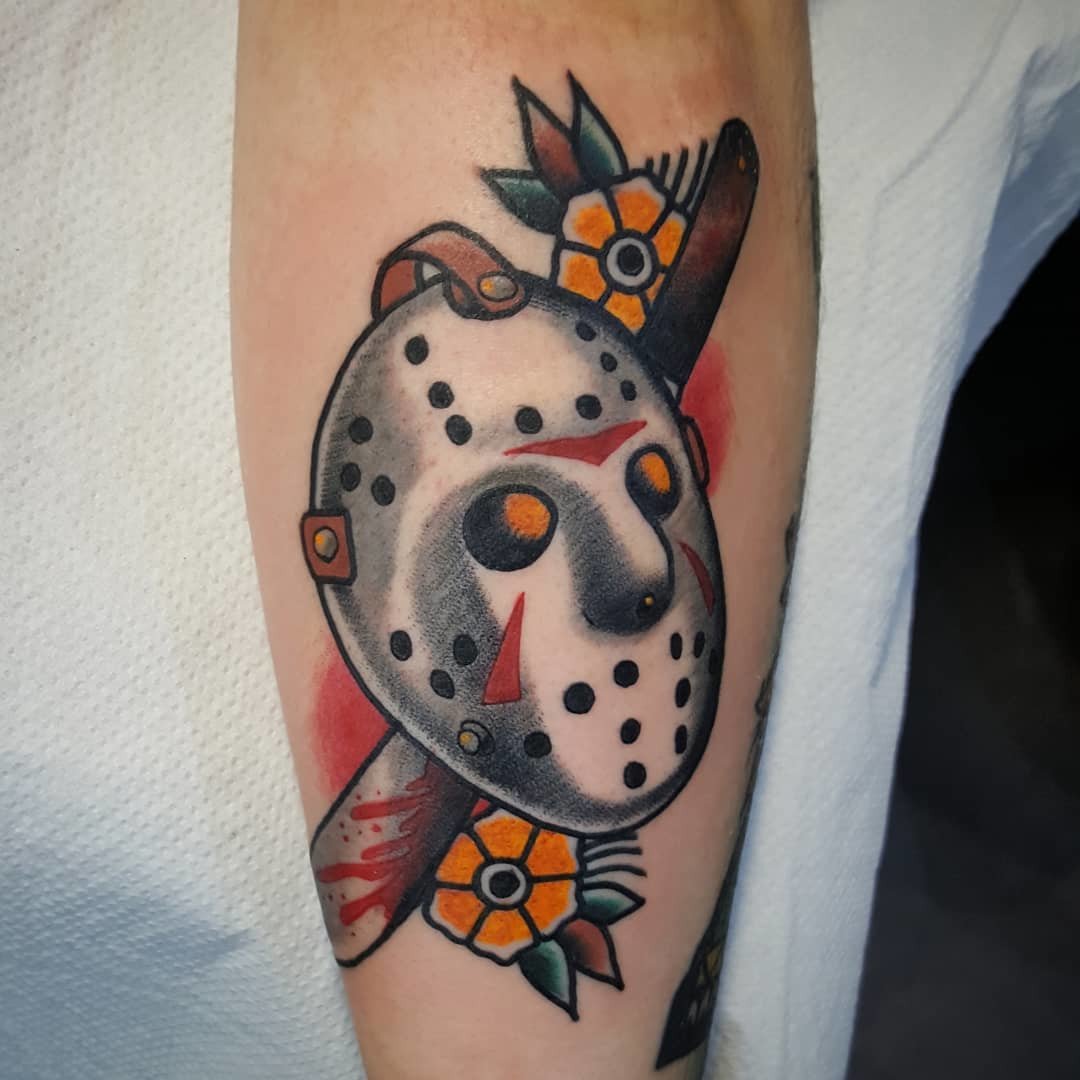 Traditional tattoos are cool, too!

Just because it isn’t realism doesn’t mean it isn’t cool! Take a look at this simple, American traditional Jason mask by Kenny Tea. The yellow flowers give it that nice, classic touch. 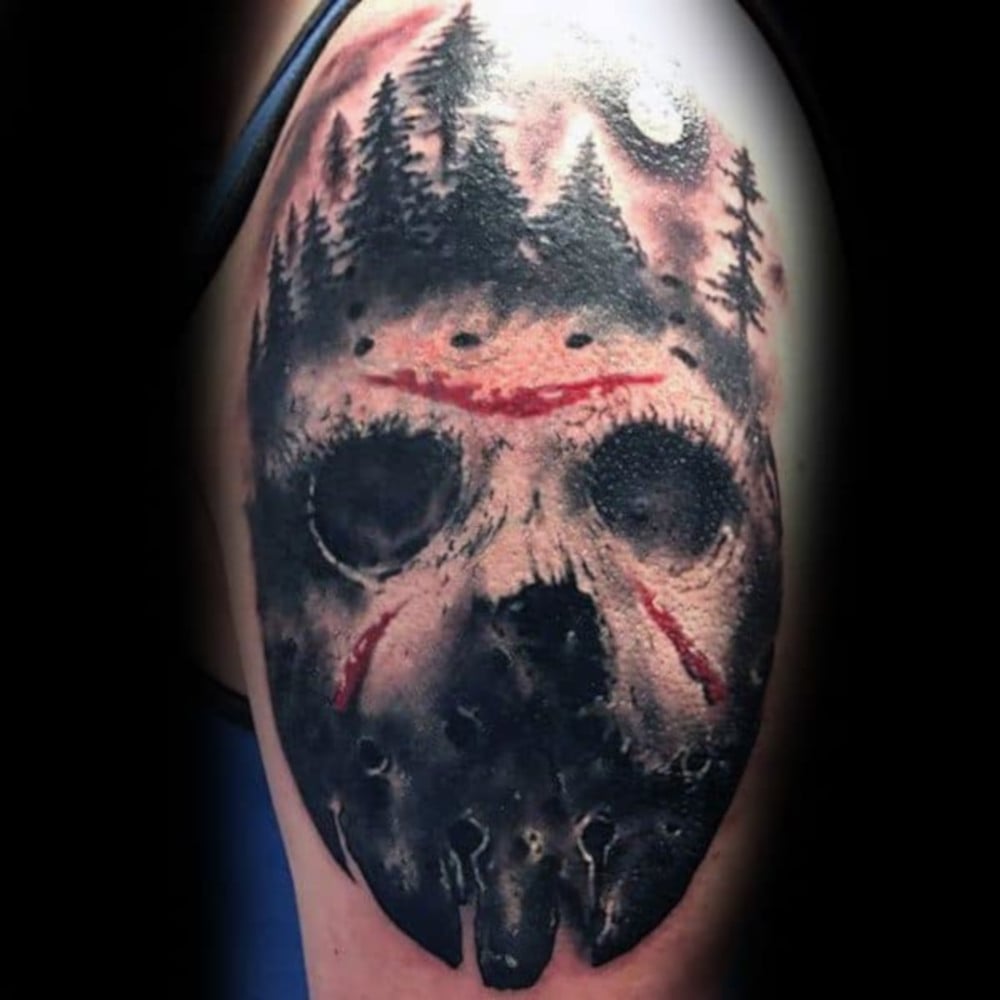 And we love the placement of this one! This Friday the 13th tattoo fits on the bicep incredibly well, and we love the concept of using the blackwork behind Jason’s mask to create a forest behind him. 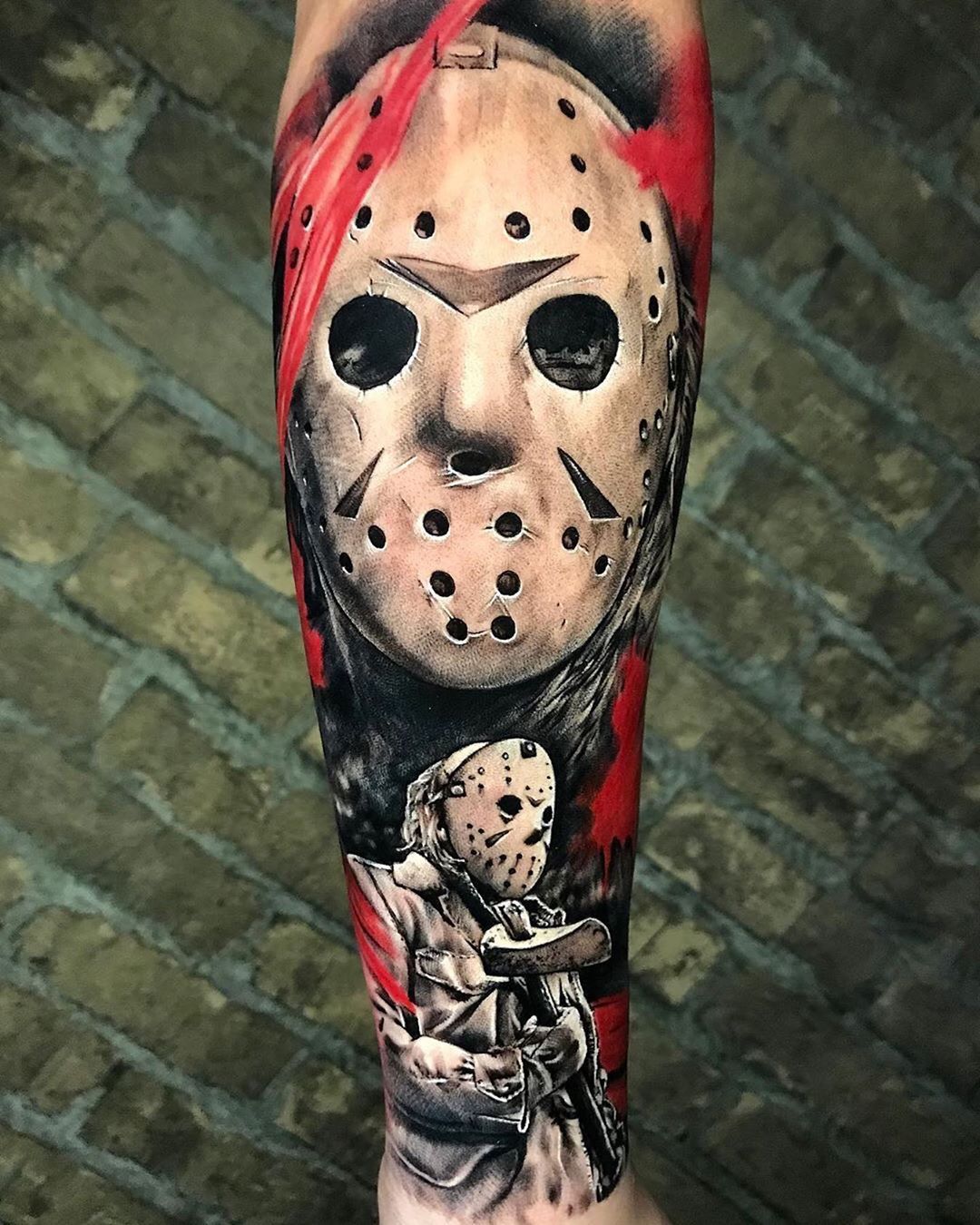 Black, white, and red all over

This piece by Marcelo Mack is super impressive, from the placement to the color. We love the red coloring in the detailed, illustrative black & white depictions of Jason. Also, using the big mask to cover the wider part of the calf and overshadow Jason’s figure below? Chef’s kisses! 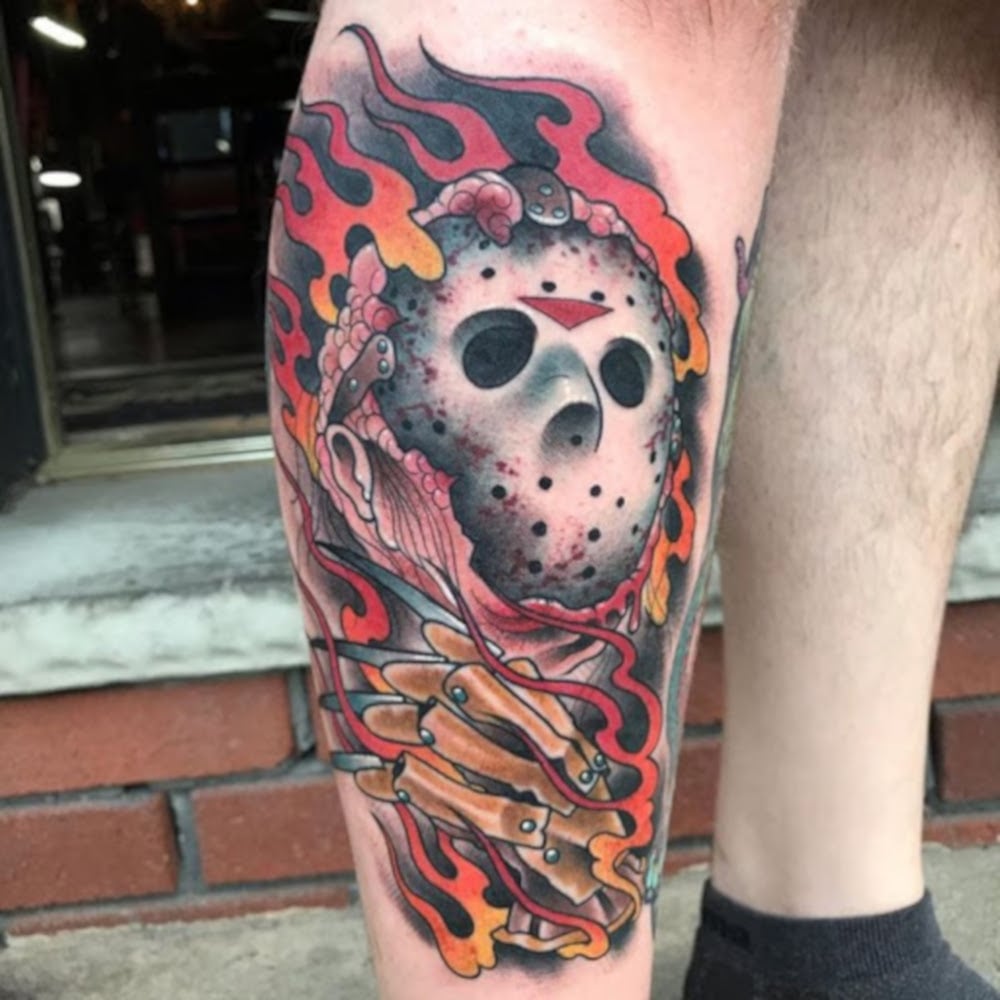 This illustrative piece by Tom Taylor will turn heads with the color alone. Inspired by Jason Goes to Hell: The Final Friday, this Friday the 13th piece does Jason justice with the cartoon, American traditional, and New School influence. 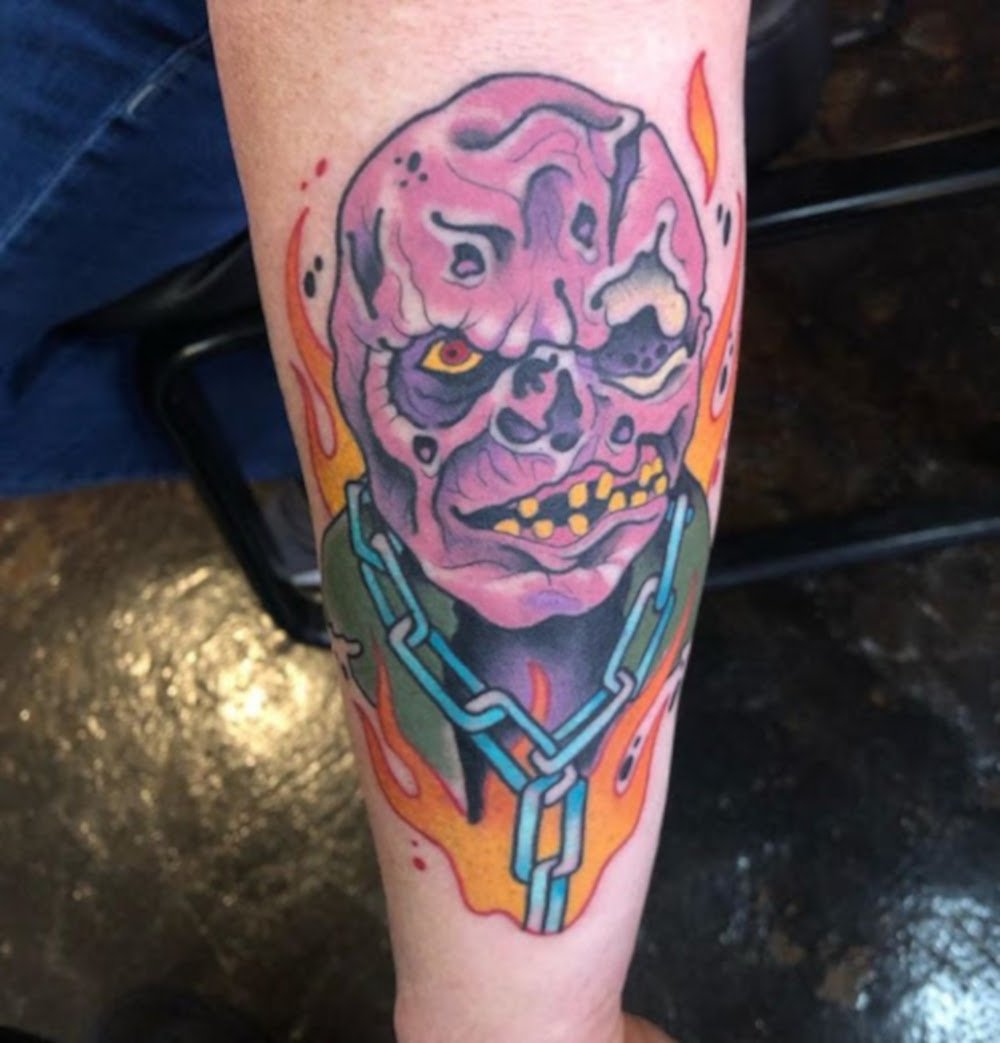 Jason without his mask

What if you don’t want Jason without his mask? Here’s an illustrative look at his handsome mug by Marty Riet McEwen. The decayed face makes the gruesome Jason piece more horrifying, and can we say we adore the yellow/purple contrast? 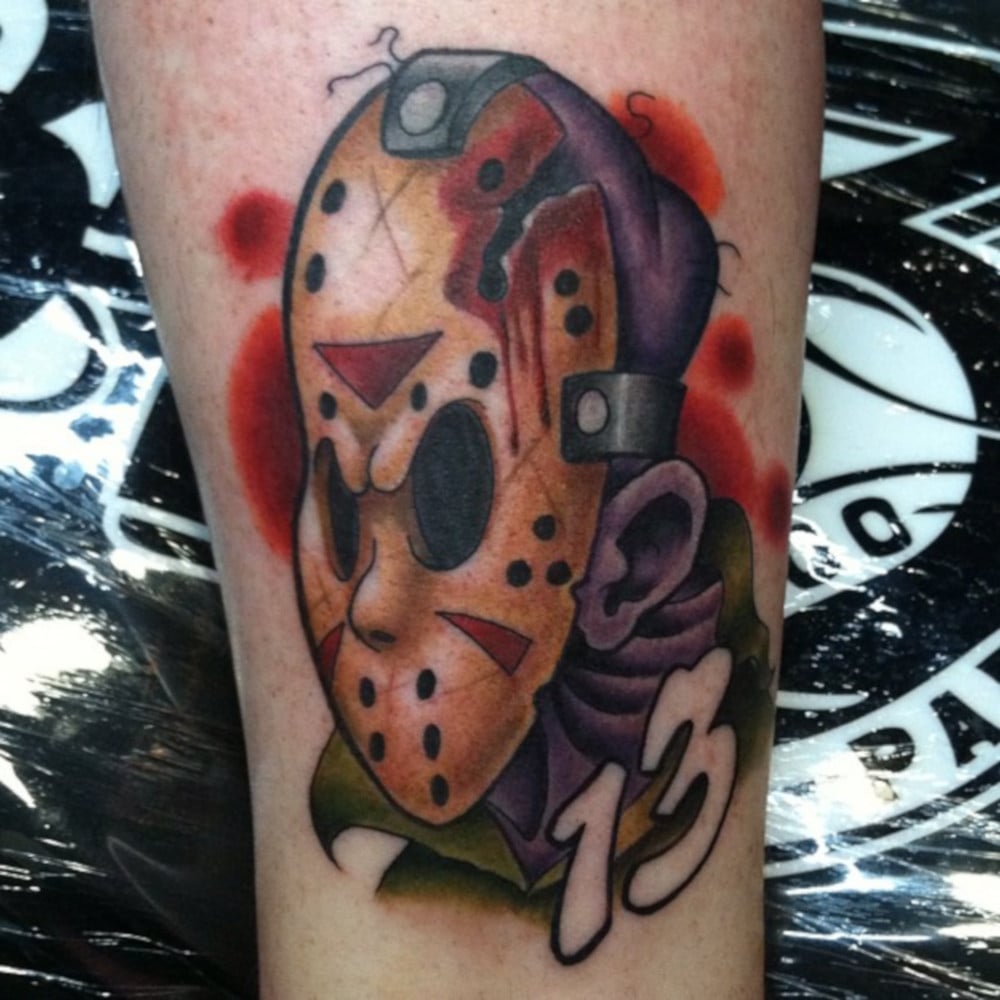 How could we forget New School?

What was your favorite Friday the 13th movie tattoo? Let us know in the comments!

Share via:
Tags
Friday the 13thhorrorJason Goes to Hell: The Final Fridaytattoos
Author