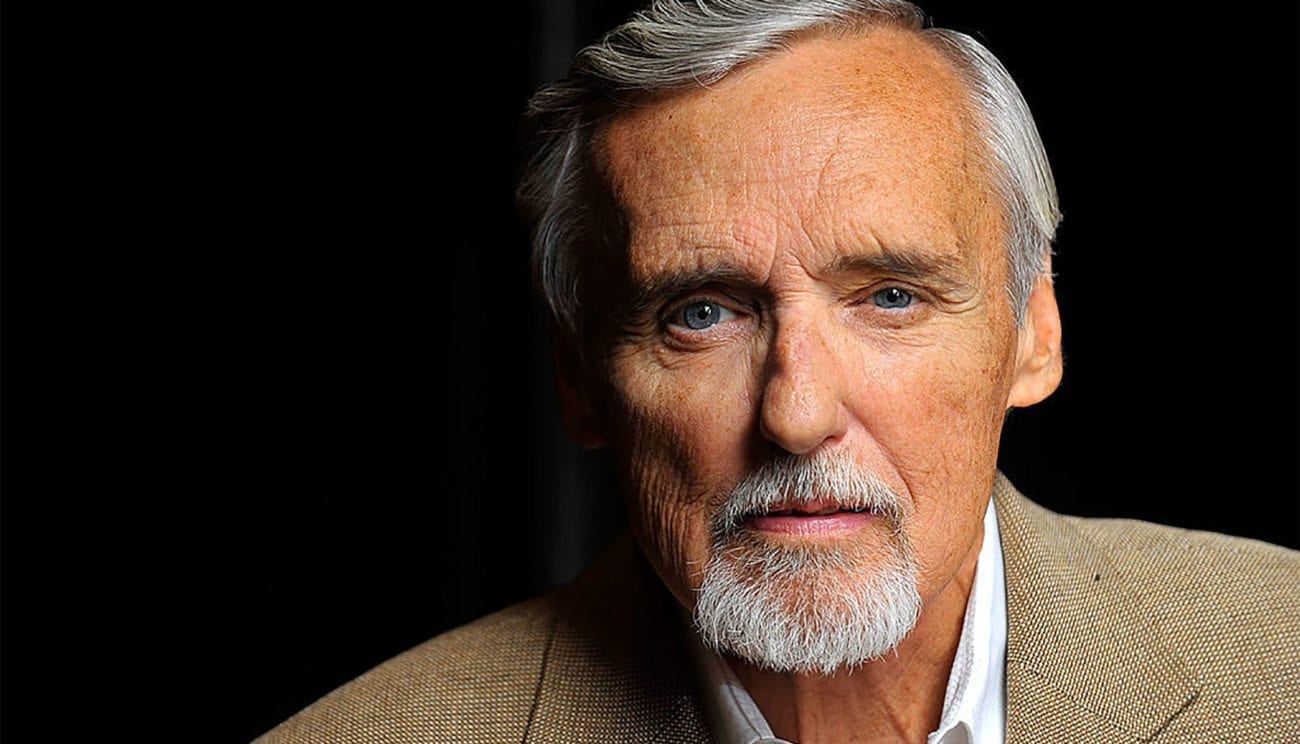 Born on May 17th, 1936, Dennis Hopper would have celebrated his 83rd birthday this year. The revered Hollywood icon sadly passed away in 2010, but his legend lives on – as does his reputation as being one of the most eccentric, creative, and free-spirited actors not just of his generation, but of all time.

While he left a gigantic imprint on Hollywood with iconoclastic performances in films like Blue Velvet, Apocalypse Now, and Easy Rider, he also enjoyed a phenomenal life full of colorful anecdotes and spectacular feats of hard living insanity. The guy was an absolute gem and though he’s gone, he’ll always be an eternal badass to us. Here’s our ranking of eight exceptional ways Dennis Hopper continues to raise hell in our hearts.

8. Hopper’s artwork continues to live on

As well as being a first class actor (and gentlemen) Hopper was also a badass painter, sculptor, and photographer. His behind-the-scenes photography work is beloved by film fans, but he also enjoyed phenomenal artistic opportunities as part of a thriving counterculture scene.

For example, in 1963 he shot a portrait of Andy Warhol, David Hockney, Henry Geldzahler, and Jeff Goodman as a foursome and also went on to shoot portraits of other legendary artists like Ed Ruscha & Roy Lichtenstein. He was a big fucking deal!

Speaking of Warhol, Hopper bought what is arguably the artist’s most famous work – Campbell’s Soup Can – for just $75 straight off the wall of art dealer Virginia Dwan. On top of that, Hopper also posed for Warhol’s iconic Screen Tests series, but perhaps his best connection to a piece of Warhol’s artwork involves the accidental bullet he shot through a Warhol screenprint of Chairman Mao.

Family friend and trustee of Hopper’s estate Alex Hitz described the incident. “One night in the shadows, Dennis, out of the corner of his eyes, saw the Mao and he was so spooked by it that he got up and shot at it, twice, putting two bullet holes in it. Andy saw it, loved it, and annotated those holes, labelling them ‘warning shot’ and ‘bullet hole’”. After Hopper’s death the painting sold for ten times its original value.

6. Dennis Hopper had the greatest excuse for not quitting the Mary Jane

We all have our extravagant reasons for refusing to give up our respective vices – we can’t function without caffeine, vodka makes us prettier, dropping $100 in Sephora in one go makes us feel alive. However, when Hopper was supposed to be sober from drugs and alcohol, he came up with an absolute doozy for why he was still hitting that sweet Mary Jane, claiming it “kept the bowels together”. Whatever works!

Hopper’s love for a good blaze sesh made him such an icon within the cannabis community that famed pot activist Craig X. Rubin tried to name a strain of kush after the beloved star. “He made it acceptable to be a pothead,” Rubin explained. “I’d go get an ounce of that right now and get hopped up on The Hopper.” Amen to that, brother!

4. Hopper’s reasons for becoming an actor are solid baller

On the set of Rebel Without a Cause, Hopper opened up to James Dean (East of Eden) about everything he wanted to escape by becoming an actor. According to Peter L. Winkler’s biography of the famed Hollywood hellraiser, Hopper explained:

“I told him how much I hated my home life, the rules, the regimentation. I told him what a nightmare my home life had been, everybody neurotic because they weren’t doing what they wanted to do, and yelling at me when I wanted to be creative, because creative people ‘end up in bars.’”

Apparently the legendary singer befriended the then 21-year-old actor after realizing he’d starred in both Giant and Rebel Without a Cause opposite Elvis’s fave actor, James Dean.

After confiding in Hopper that he had some mighty big concerns about having to hit a female co-star for a scene in his upcoming movie Love Me Tender, Hopper bizarrely had to explain to the hip-shaking stud that movies are actually make-believe and the violence in them isn’t real. Jesus wept.

In 1969, Hopper dropped LSD with costar Jack Nicholson (One Flew Over the Cuckoo’s Nest) at the tomb of D.H. Lawrence like every dude you went to college with probably wanted to. As Nicholson tells it, “His drug intake used to be extraordinary. I could handle the drinking – I felt that I could control that – but he could happily smoke joint after joint, and did as much while we were making Easy Rider.”

Following their LSD trip, the two of them mysteriously woke up halfway up a tree. “When you go through something like that together, it can’t help but bring you closer.”

1. Dennis Hopper once technically blew himself up with dynamite (and survived)

While visiting Rice University in Houston, Texas, a drunk & stoned Hopper did what any of us consider after a heavy few days on the sesh: organized an audience to watch him perform the “Russian Dynamite Death Chair Act” where he sat in a chair with six sticks of dynamite and lit the damn fuse.

The actor apparently learned the stunt from a travelling roadshow and knew how to do it without harming himself. A Rice News correspondent described what happened when he sat down and lit the fuse:

Dennis Hopper, at one with the shock wave, was thrown headlong in a halo of fire. For a single, timeless instant he looked like Wile E. Coyote, frazzled and splayed by his own petard. Then billowing smoke hid the scene. We all rushed forward, past the police, into the expanding cloud of smoke, excited, apprehensive, and no less expectant than we had been before the explosion. Were we looking for Hopper or pieces we could take home as souvenirs?

They wouldn’t find any – Hopper pulled off the stunt without a hitch.