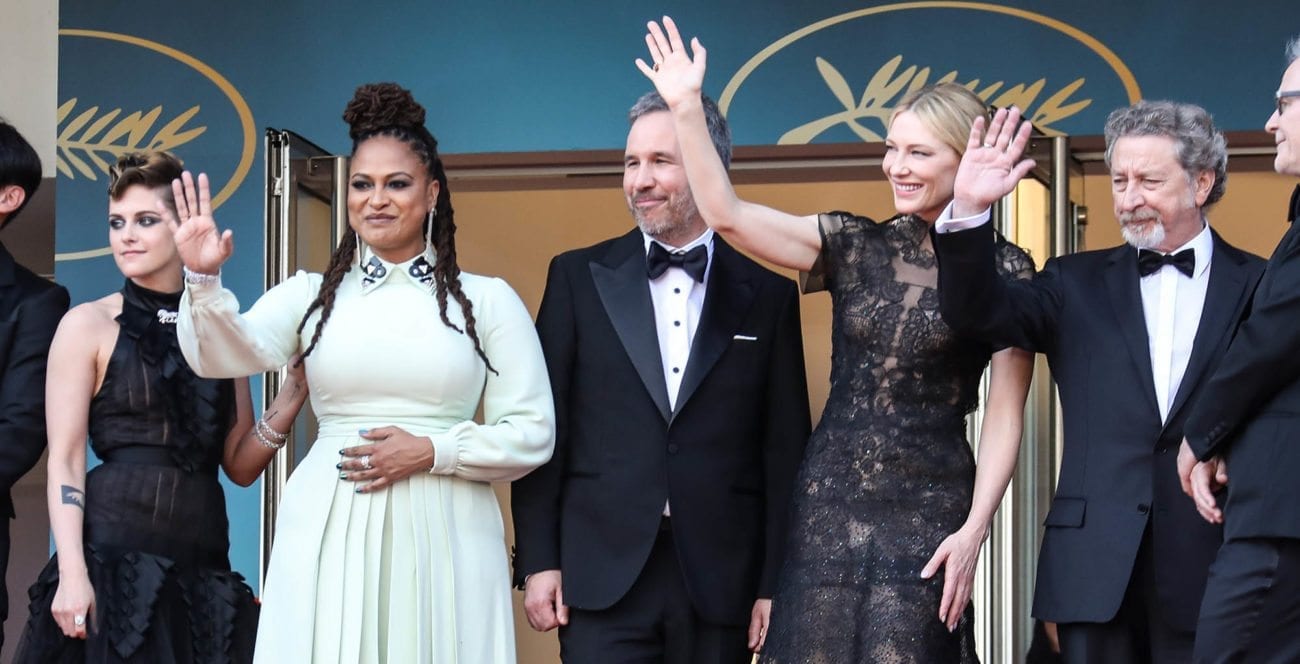 Cannes 2018: Find out why the old model of Cannes is changing

Grab yourselves some bunion pads, a $5000 “statement” outfit, and put that cell phone away for goodness’s sake (no selfies allowed!) because the 71st Cannes Film Festival is well and truly underway. We’re day four into the old guard of the film fest world and the French Riviera is abuzz with excitement, as we’re sure you are to. We bet you’ve barely slept a wink this week, just desperately waiting to hear about jury president Cate Blanchett’s dangerously plunging cutaway blazer paired with osteoarthritis-inducing high heels. We know – it’s all we can think about too . . . *

The festival opened with Asghar Farhadi‘s psychological thriller Everybody Knows, a rather ironic title to follow the runup to the event, where the Cannes team continued to add draconian layers to its already outdated rules. Introducing a ban on press screenings, red carpet selfies, and Netflix from competition, you could argue that with regards to Cannes, nobody knows much at all.

While we could easily spend days discussing Cannes’s questionable decision-making, we do like to keep you informed and there is of course a smorgasbord of cinematic talent introducing new work at the prestigious event. As such, we’ve decided to look at the deals, the drops, and the most WTF moments of the 2018 Cannes Film Festival so far:

We were pretty darn disappointed (but not all that surprised) at the abysmally low number of female directors in the Competition lineup – just three (Nadine Labaki, Eva Husson, and Alice Rohrwacher) in the seventeen-strong list. After all, as The Hollywood Reporter pointed out, when it comes to big budget fare, Cannes has always been a man’s world. However, “at this year’s incarnation, there’s a slew of female-fronted genre films that are upending that paradigm.” One such film includes the James Bond–esque movie 355, starring Jessica Chastain, Fan Bingbing, Marion Cotillard, Penelope Cruz, and Lupita Nyong’o as international agents.

Deadline reported that Chastain (Zero Dark Thirty) thought up the idea for the film, using the name from Agent 355 – an unidentified woman who worked as one of the US’s first secret agents during the American Revolution. The A-lister cast got together last night for a presentation to pitch the film to 300 top buyers, both domestic and international.

While the buzz surrounding the film is loud, 355 isn’t an outlier, with a number of female filmmakers debuting their work at this year’s Cannes. Sony Picture Classics has acquired the North American and Latin American rights to director Nadine Labaki’s drama Capernaum, which is in competition for the Palme d’Or. If you’re at the event right now, be sure to check out the premiere next Thursday.

The first Kenyan film to be selected for the festival – Wanuri Kahiu’s Rafiki – was banned by its country’s film classification board for “promoting lesbianism”. But that did not stop it slaying at Cannes, receiving warm reviews including IndieWire declaring the romance “brings fresh context to an old story.”

Of course, this doesn’t mean Cannes has changed overnight and while there are more female directors at the festival this year, it is still facing criticism for there not being enough. Speaking at an opening-day press conference for the festival, Cate Blanchett (Carol) attempted to deflect the issue by instead pointing to the female-majority makeup of this year’s jury. “The selection committee now has more women on board than in previous years, which will obviously change the lens through which the films are chosen. But these things are not going to happen overnight.”

Much like Sundance, Berlinale, and the other major film festivals where historically big deals were made by studio bigwigs, Cannes 2018 has been somewhat of a sleepy event so far. Per The Hollywood Reporter, “The Cannes market is in a state of transition. The seismic changes that have rocked the independent film business — with the rise of Netflix and the decline in DVD and TV licensing revenue — are now playing out on the Croisette as old models of financing and distributing indie movies are falling away and new ones are fighting to take their place.”

When buyers approach Cannes now, there’s a different mindset in place and there are new players on the circuit. One such new player is Neon, which made the first Cannes 2018 purchase with Ali Abbasi’s acclaimed fantasy thriller Border, taking the indie distributor into the foreign-language film market. The movie premiered to positive reviews in the Un Certain Regard section.

As mentioned, the Penelope Cruz (Vanilla Sky) & Ricardo Darín (The Secret in Their Eyes) starring Everybody Knows opened the festival – which Focus Features pounced on and acquired the rights to this week. Focus managed to beat out competition from Netflix because director Farhadi reportedly wanted a theatrical release. On the other side of the coin, as auteur Jean-Luc Godard prepares to have his drama The Picture Book premiered at this year’s Cannes, his sales agent Vincent Maraval has revealed an innovative idea he had for the release. According to IndieWire, “he wanted to sell the movie to Netflix, and launch it in tandem with its Cannes premiere, prior to any theatrical release.” Unfortunately this would not have been possible, what with the divide between Netflix and Cannes being wider than ever. Maybe next year, Maraval.

Elsewhere, Miramax Films snapped up Guy Ritchie’s new offering Toff Guys in one of the biggest Cannes 2018 deals so far. The company paid $30 million to secure the world rights for the British gangster film, with Miramax CEO Bill Block stating, “We are thrilled to work with a master filmmaker in his element who is committed to delivering a super fun kick ass theatrical experience.”

Finally, it’s been up and down for British director Terry Gilliam, who has been stuck in a will-he-won’t-he release debacle for an absolute age over his upcoming film The Man Who Killed Don Quixote. Sadly Gilliam suffered a stroke just days before finding out the movie won a court decision to be screened at this year’s Cannes Film Festival, which will premiere May 19. (Don’t worry – he’s doing fine!) However, Amazon will no longer be distributing the movie in the United States despite having thrown a significant amount of financing at the feature. So it looks like the US distribution rights for The Man Who Killed Don Quixote are up for grabs, folks!

Dealing with the Cannes bans

Outside of the theaters, and the new Cannes bans have got people talking. Journalists are still grumbling about Cannes’s decision to ban press screenings. However, “so far it hasn’t disrupted a fast-paced environment in which every day brings a new wave of buzz,” noted IndieWire. As festival director Thierry Frémaux pointed out, “It’s not about the press, it’s about the gala screenings.” When it comes to the selfie ban, people are just straight up ignoring it (which is something we all saw coming).

That’s all for now, folks! Although there’s still another week left of this slog, so we’ll be sure to check in with an update soon. Don’t forget, we’ve still got the enthralling Palme d’Or competition to go, which we’re sure you can barely contain your excitement for.

*Editor’s note: Film Daily cannot be held accountable for the terrifying levels of sarcasm presented by its staff writers.