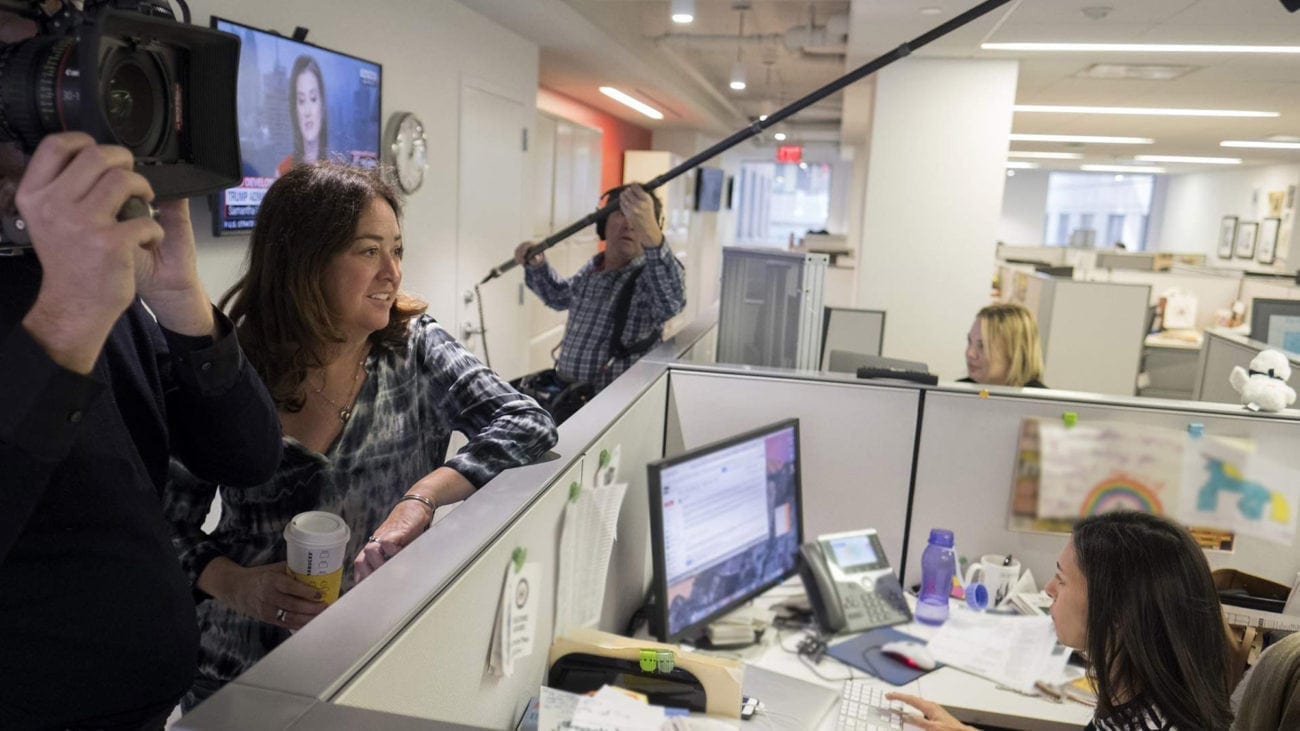 The Fourth Estate: The best TV shows about the news

One of the most gripping, yet questionable, docuseries of 2018 was The Fourth Estate on Showtime. Liz Garbus’s examination took viewers inside The New York Times for the exhaustive first year of the Trump presidency which, as Garbus herself stated, pulled “back the curtain on how the most important newspaper in the world fights for the people’s right to know the truth in the era of ‘fake news’ and ‘alternative facts’.”

We surely aren’t the first publication to express skepticism about the accuracy of portrayals of internal goings-on at mainstream publications in the wake of the 1970s revelations about the CIA’s Project Mockingbird – “people’s right to know” indeed. One thing we’re not skeptical about is newsroom shows’ capacity to entertain, though. What’s more gripping than scoring a great scoop?

Read on for ten of the best shows about news organizations and the reporters behind them – fire up the presses, get that teleprompter in check, and . . . action!

Oliver Platt (The Three Musketeers) starred in this early 00s drama hit as Wallace Benton, the star columnist for a fictional tabloid magazine called the NY Ledger (said to be modelled on the New York Post). Working alongside his soon-to-be ex-wife, he shows an unprecedented level of dedication to getting the scoop no matter what it takes.

Does Cosmopolitan count as a news source? In the case of So Cosmo, the answer is unequivocally yes. Described as “The Devil Wears Prada for the Kardashian generation,” there’s no denying the reality show is one hundred percent trash. It’s also definitely your guilty pleasure that you’d have no trouble binging with a bottle of wine and ten portions of pizza.

Fox’s short-lived newsroom satire saw sitcom royalty Kelsey Grammer (Frasier) join Patricia Heaton (Everybody Loves Raymond) to play a pair of star news anchors working together at the fictional news station WURG after a ten-year gap. It’s filled with a level of awkwardness you’d hope to see from a news pairing who share as much on-screen chemistry as they do off-screen squabbling.

Get thrown into the chaotic world of celebrity journalism as Courtney Cox (Friends) plays Lucy Spiller – the ruthless and relentless editor of celebrity gossip magazine Drrt. Revelling in the excesses and cutthroat fickleness of show biz, Lucy oversees a crack team of reporters and paparazzi as she bulldozes her way through an industry of celebrities, tabloids, and utter sleaze. Definitely an insight into the dirtier side of “news”.

Helmed by The West Wing’s Aaron Sorkin, The Newsroom chronicles the behind-the-scenes events at the fictional Atlantis Cable News (ACN) channel. Jeff Daniels (The Squid and the Whale) as volatile news anchor Will McAvoy who, together with his staff, set out on a quixotic mission to do the news well in the face of corporate and commercial obstacles.

An oldie but a goodie, The Mary Tyler Moore Show is the brainchild of James L. Brooks & Allan Burns and follows the actress’s character Mary Richards as a thirty-something singleton who lands a job as an associate producer of the Six O’Clock News at fictional network WJM-TV. The show throws out a whole bunch of amusing characters, from the incompetent anchorman Ted Baxter (Ted Knight) to the news writer Murray Slaughter (Gavin MacLeod), not forgetting her tough but reliable boss Lou Grant (Edward Asner).

Cut before it even got a chance to shine, Aaron Sorkin’s Studio 60 was a show within a show, taking place behind the scenes of a live-sketch comedy on the fictional television network NBS.

The cast was filled with actors who excelled in comedy and drama, the Monday night time spot was perfect, and Sorkin (Molly’s Game) was involved. It should’ve been a hit but instead was axed after just one season, with some citing the reason was because audience’s expectations were too high following the wide success of The West Wing. Sucks for Sorkin!

Lifting the veil on Buzzfeed’s busy newsroom, twenty fifteen-minute episodes aired weekly, each one spotlighting a journalist from one of the world’s biggest news organizations today.

Per Variety, “The first episode, ‘The Internet Whisperers’, follows BuzzFeed reporter Scaachi Koul as she delves in on a story about the ‘head orgasm’ experience of ASMR, or autonomous sensory meridian response.”

BET’s staple drama starred Gabrielle Union (Bring It On) as a wildly successful TV reporter searching for love in all the wrong places. Head of Programming at BET Networks, Connie Orlando, explained how the show was “a landmark series not only for BET, but for African American women around the world who saw themselves in Mary Jane, her family, friends, and coworkers.”

Hailed as the 30 Rock follow-up audiences had been waiting for, the NBC comedy follows an ambitious news producer Katie (Briga Heelan) who attempts to cut out a career for herself at a local station. The laughs kick in when her pushy mother (Andrea Martin) is hired as the network’s latest intern.

If you’re looking for some eccentric British humor mixed in with a satire on news broadcasting that is even more relevant today than it was back then, Christopher Morris’s The Day Today is worth a bash. Spoofing BBC-esque news organizations with ludicrous stories, outrageous vox pops, and a sports director who struggles for metaphors, this show will have you laughing so hard you’ll be gasping for air.