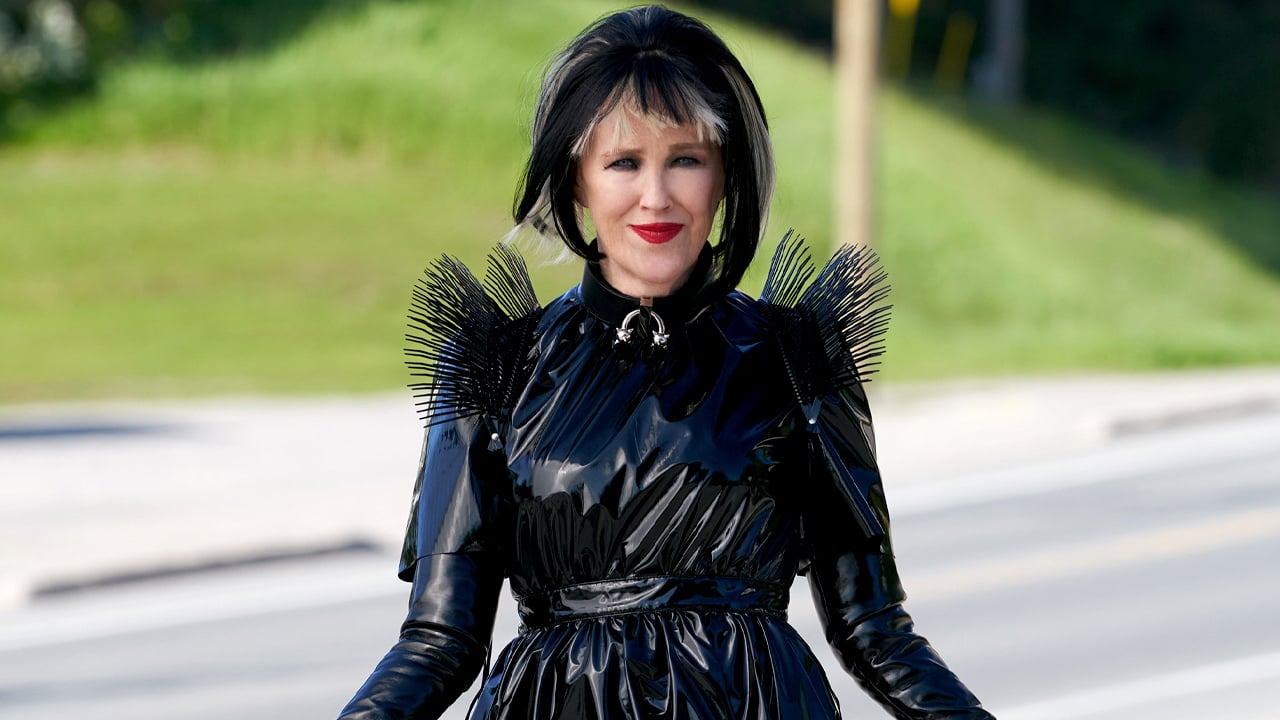 Moira Rose in ‘Schitt’s Creek’: These outfits made her our fave

When we think of Schitt’s Creek’s Moira Rose (Catherine O’Hara), overly dramatic, self-righteous, and pretentious come to mind. Completely full of herself and lacking in self-awareness, the matriarch of the Rose clan has an eccentric wardrobe to match her big personality.

When the Roses are forced to live in a motel after losing their fortune in Schitt’s Creek, all they have are their belongings – including clothes. In the pilot, Moira Rose is anxious about how she’s going to store all her wigs! They end up hanging on a big portion of her tiny motel wall. We can see the “wig wall” in the background in many episodes. 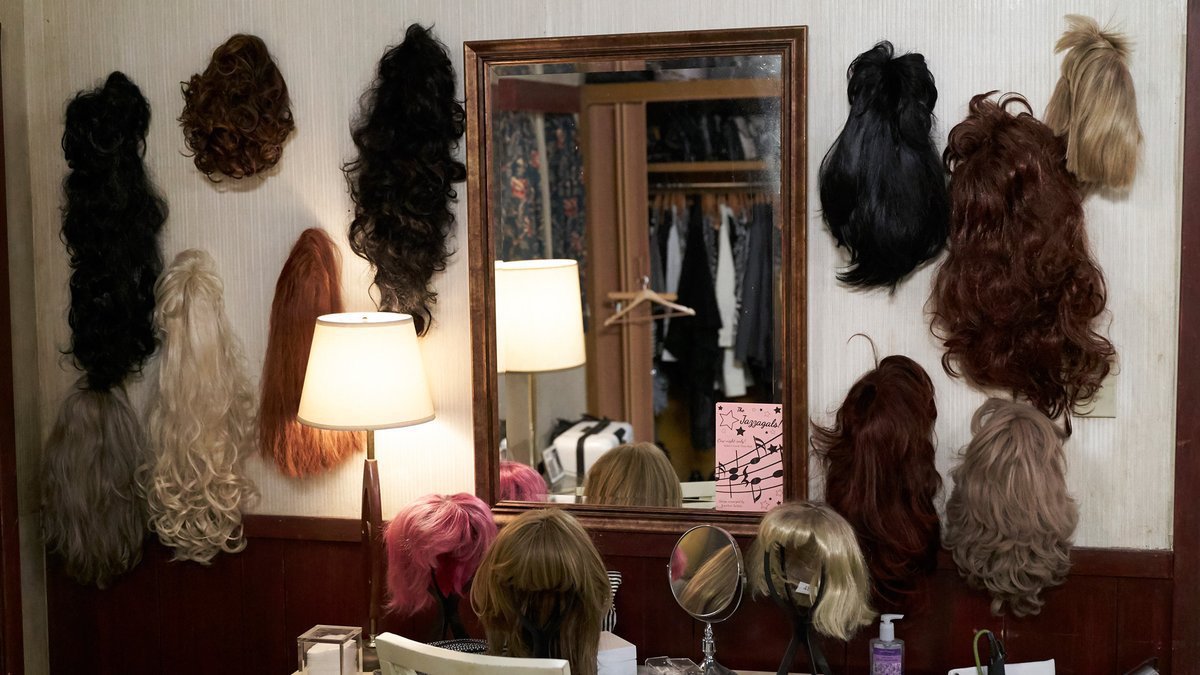 In a behind-the-scenes interview, show co-creator Dan Levy detailed how they scoured the internet for bold, designer pieces for Moira Rose to wear. To create multiple over-the-top looks, they selected stark black-and-white ensembles with bold cuts and necklines & flashy materials.

We’re most awestruck by how well Moira Rose pulls off every zany outfit and wig she has. While we love them all, here are our favorites. 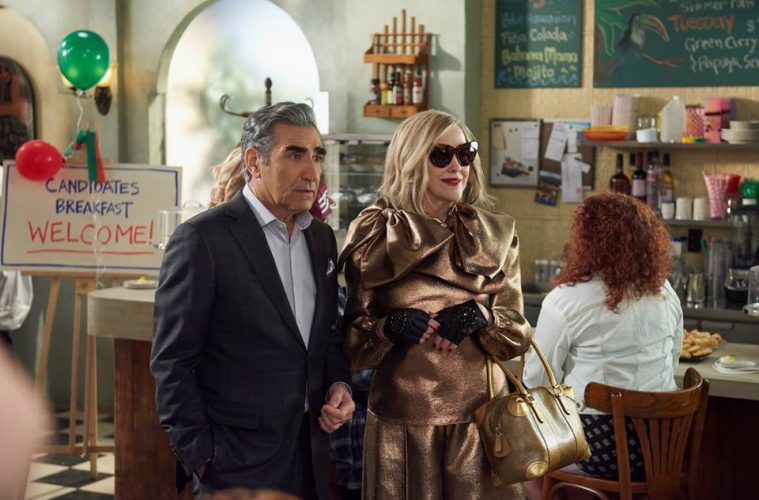 When Moira Rose shows up at the Candidates’ breakfast in S2Ep7 “The Candidate,” she dresses to impress. Originally, she mentions to her husband Johnny that she was going to go with a mohawk. We’re glad she didn’t because the outfit she put together turns heads without looking gauche.

Her glamorous golden jumpsuit features a giant bow we can’t miss. Plus, she accessories it with a monochrome gold bag, black sunglasses, and red lipstick. While Roland Schitt thinks she looks like the tin man, we love this look! 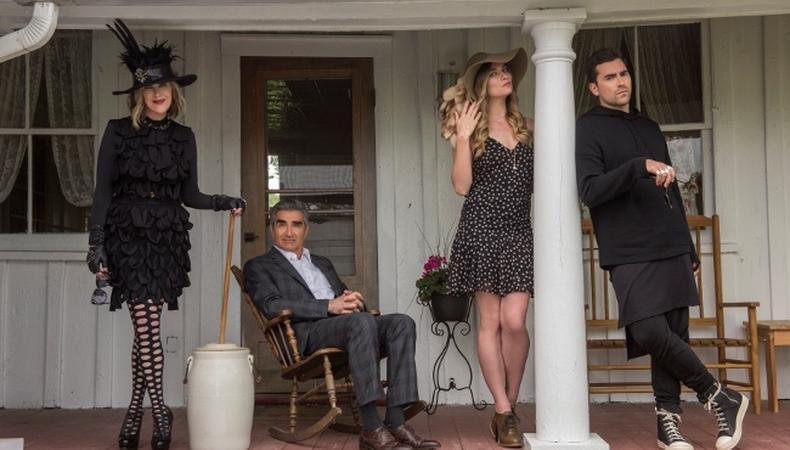 Looking for her runaway son

Moira Rose looks like she’s going to a funeral, but no. She has to find her son David who ran away after a bad breakup in S2Ep1 “Finding David.” With a feathery hat, striking tights, ruffled skirt & cane, she looks more like a Mardi Gras performer or a jazz funeral director.

When Moira Rose is asked by an old friend to advertise his sub-par fruit wine, she still dresses to impress in S1Ep6 “Wine and Roses.” Even as she gets drunk in an I Love Lucy, “Vitameatavegamin”-inspired scene, she looks dapper in a big, black broach, bold white sh!*, and unique suit jacket. 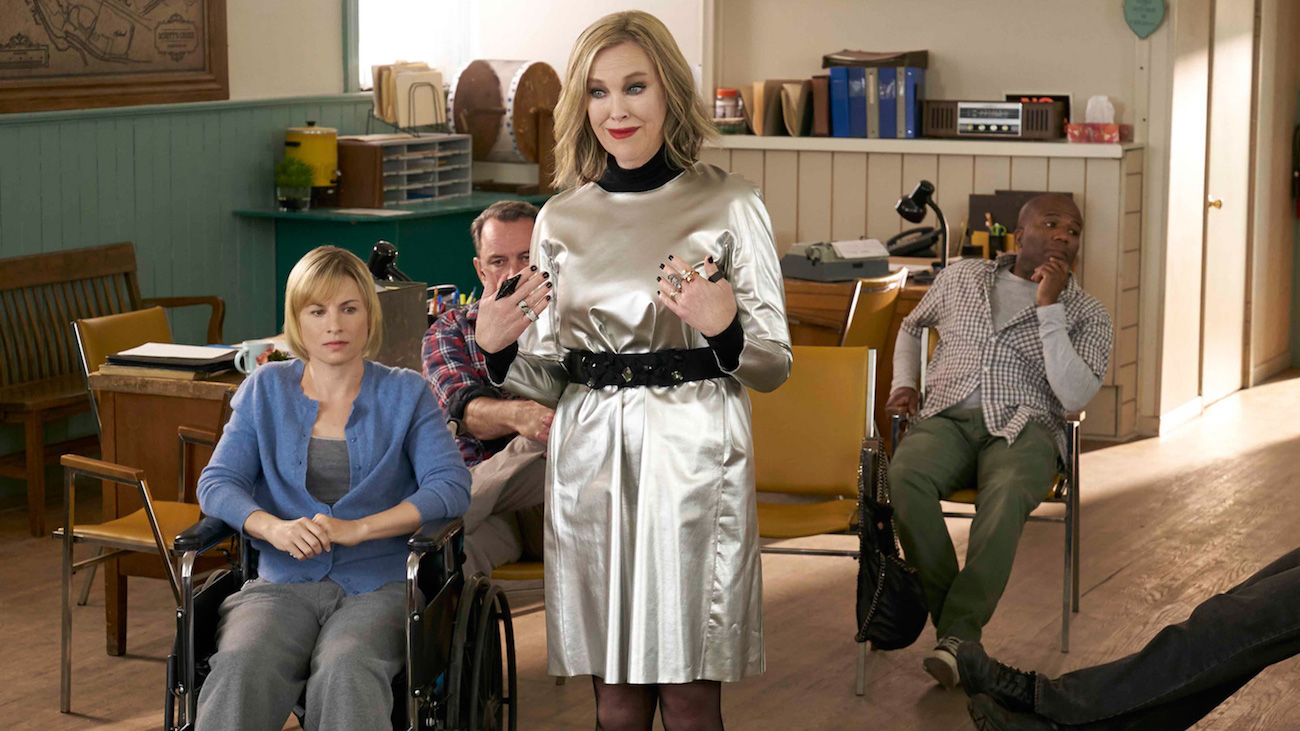 When Moira Rose announced her candidacy for town councilwoman in S2Ep6 “Moira vs. Town Council,” she couldn’t have picked a flashier outfit. A metallic silver dress, red wig, and black tights made her stand out on her bid for candidacy. 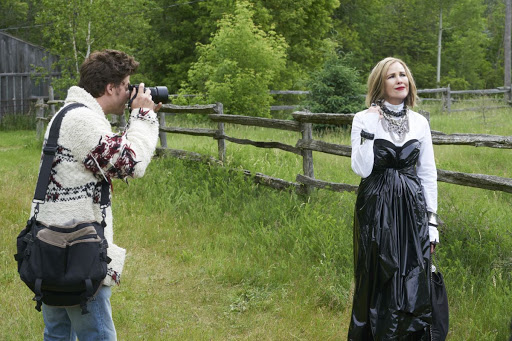 In S2Ep10 “Sebastian Raine,” David’s ex-boyfriend comes into town and wants to do a photoshoot with Moira Rose. For her event, she chooses a long, shiny plastic cress over a silky blouse with, her favorite, a large statement necklace. We love it because Moira is the only person on the planet who can pull that off! 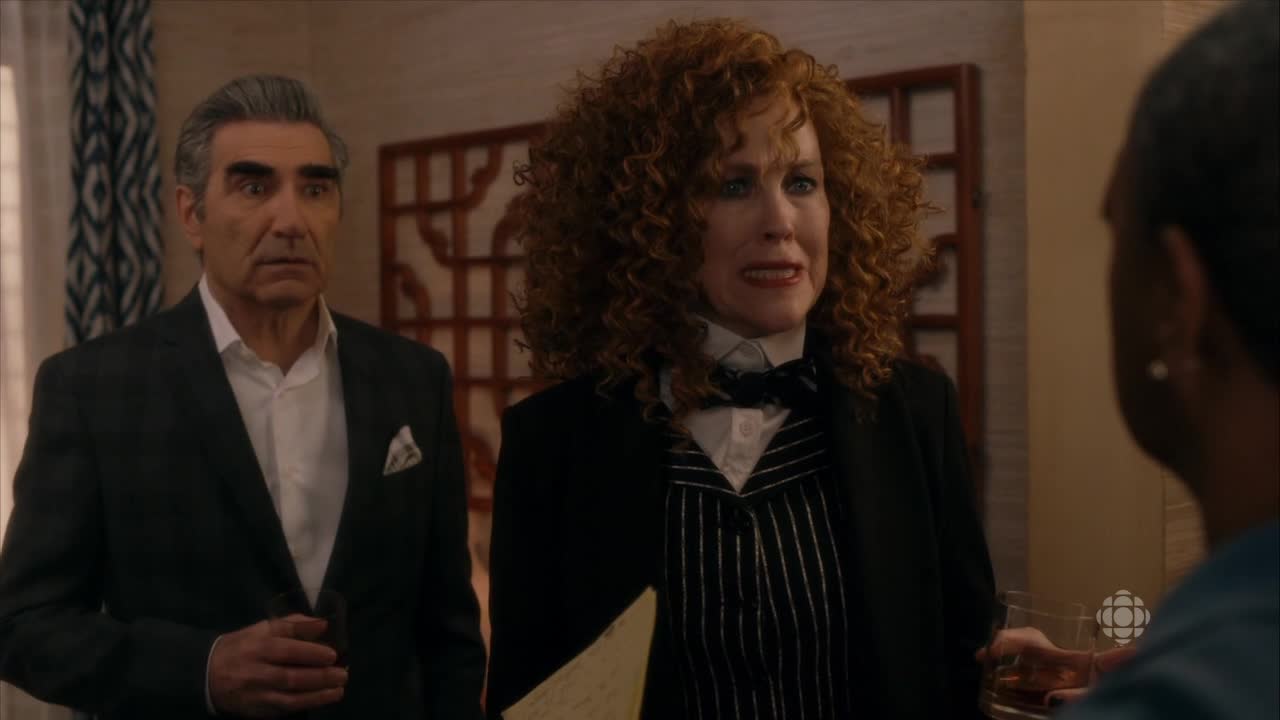 Of all of Moira Rose’s wigs, the one that stands out the most to us is the big, gold lion’s mane of curls she wears in S2Ep10, “Ronnie’s Party.” This outfit paired with a pinstripe, three-piece suit is one of our favorite ensembles. 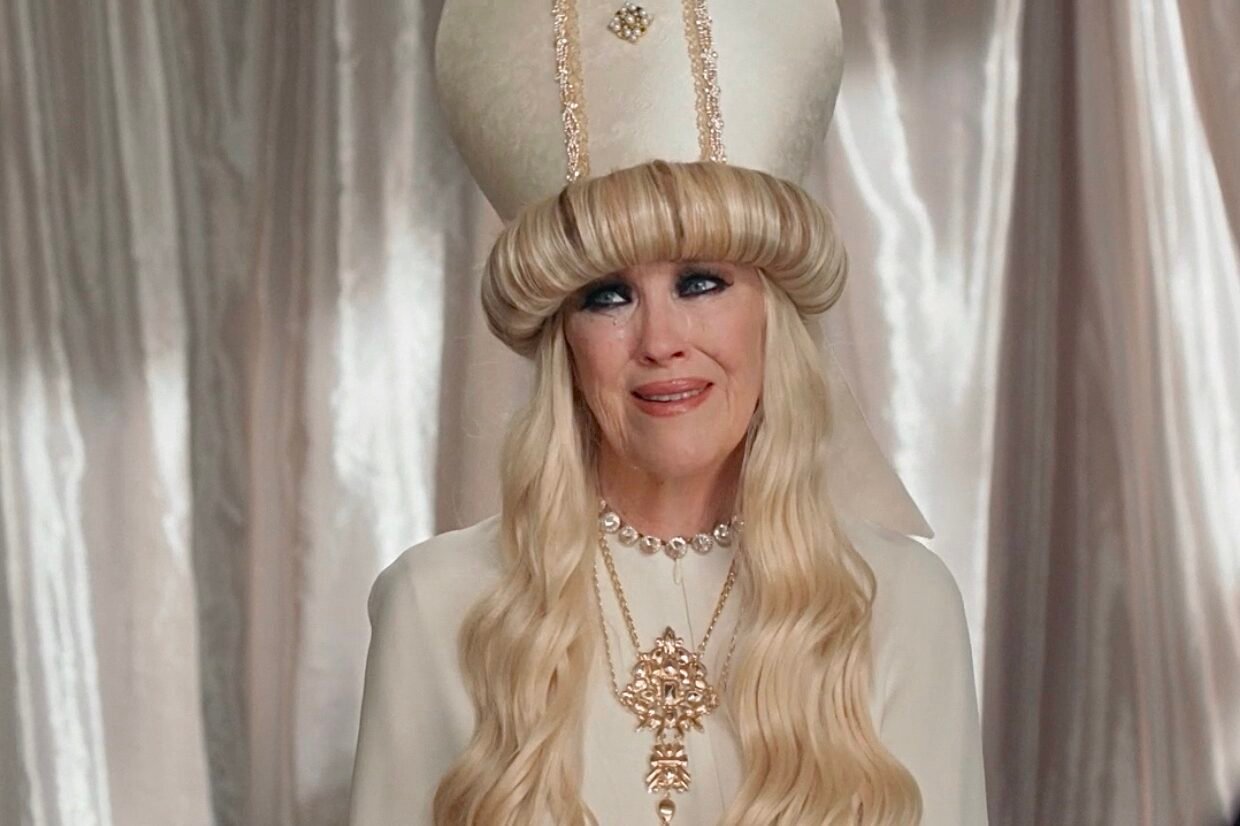 Finally, when Moira Rose officiates her son’s wedding in S6Ep14 “Happy Ending,” she couldn’t have picked a more over-the-top outfit. The wig arranged into a bishop’s hat is perfectly gaudy. Plus, the long, flowing locks from underneath give Moira a soft, angelic look.

Can we also point out another reason we love Moira Rose’s fashion? Of all the Roses, her fashion choices stand out against the drab, big-box fashions worn by the residents the most. Even tho 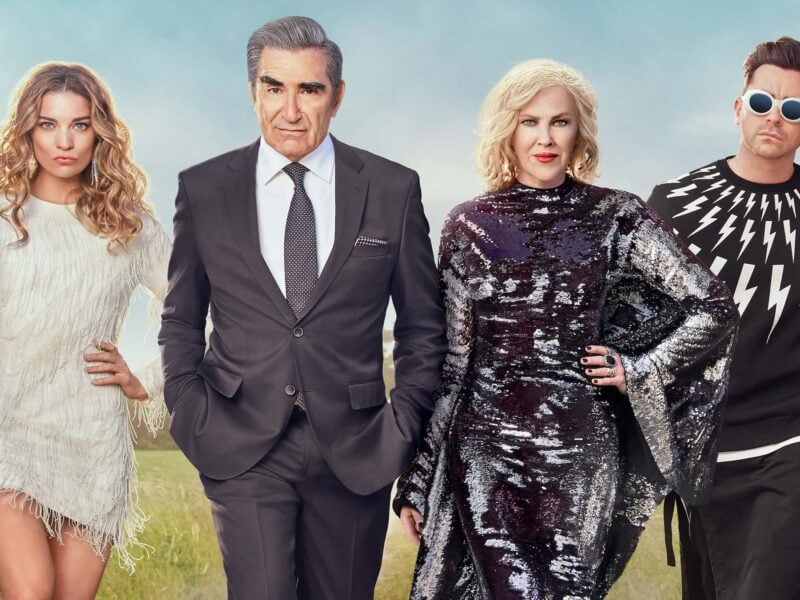