Trending News
HomeNewsIs the killing of Ken Rex McElroy one of the craziest cold cases ever?

Is the killing of Ken Rex McElroy one of the craziest cold cases ever? 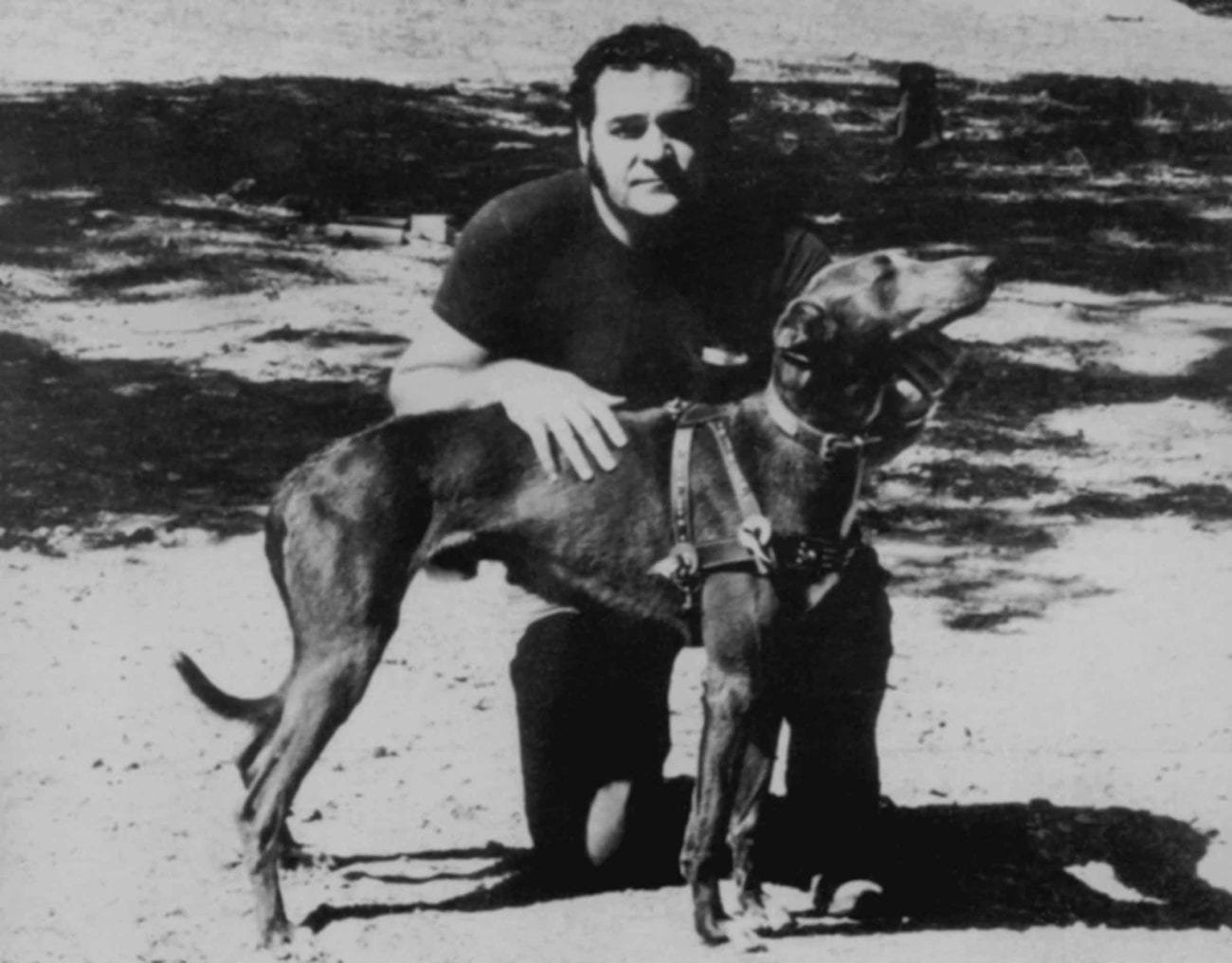 Is the killing of Ken Rex McElroy one of the craziest cold cases ever?

How does that old saying go? Three can keep a secret, if two of them are dead. It’s a saying attributed to Benjamin Franklin. Though if he met the people of the town of Skidmore, MO, then maybe $100 Ben would reconsider that saying. Why?

Well, it has to do with the death of a town bully, a town that saw who did it, and no one saying anything to anyone for decades. This cold case is cold because no one will ever talk.

Ken Rex McElroy was a bully to put it mildly. For decades, the man held the town of Skidmore virtually hostage. He did whatever he wanted, often in front of witness, and through a combination of great legal representation and intimidation, McElroy was only convicted once. That led to his death.

When Ken Rex McElroy died in 1981, the town of Skidmore had about 440 people. Just about all of them and were scared of McElroy. Over the course of decades, McElroy had gotten himself a reputation in the town. He stole livestock, committed arson, and had a liking for underage girls, who he would “marry” in order to get their silence.

The stories about McElroy are all disturbing to hear. When he met his last wife, Trena McCloud, she was twelve. By fourteen, McCloud was pregnant, dropped out of school, and went to live with McElroy and his third wife, Alice. In order to escape charges of statutory rape, McElroy divorced Alice and married Trena.

When Trena tried to flee with her baby, McElroy burned her parents home down and shot the family dog after bringing Trena back. When he was indicted for the arson and Trena and her child sent to a foster family, McElroy threatened the family and would sit outside their house. 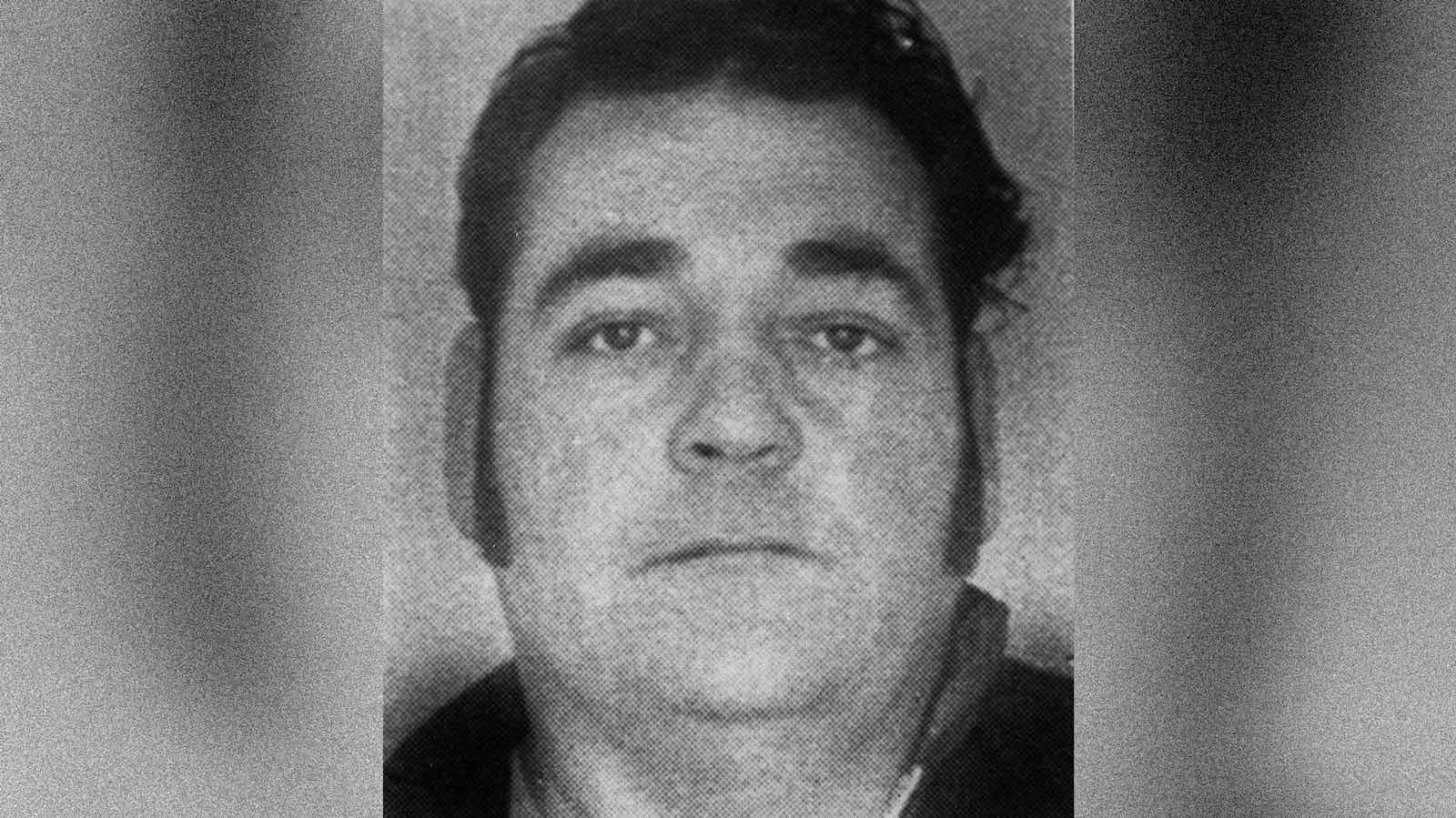 It was something of a pattern with McElroy. In order to get off his charges, he intimated any and all witnesses, usually sitting outside of their homes all hours of the day. The stalking and harassment would unnerve the witnesses so much that many would back out.

Despite all of this though, it caught up to McElroy later rather than sooner. See something amazing happened in 1981. McElroy was convicted of a crime.

And that’s where things go the route of the vigilante. 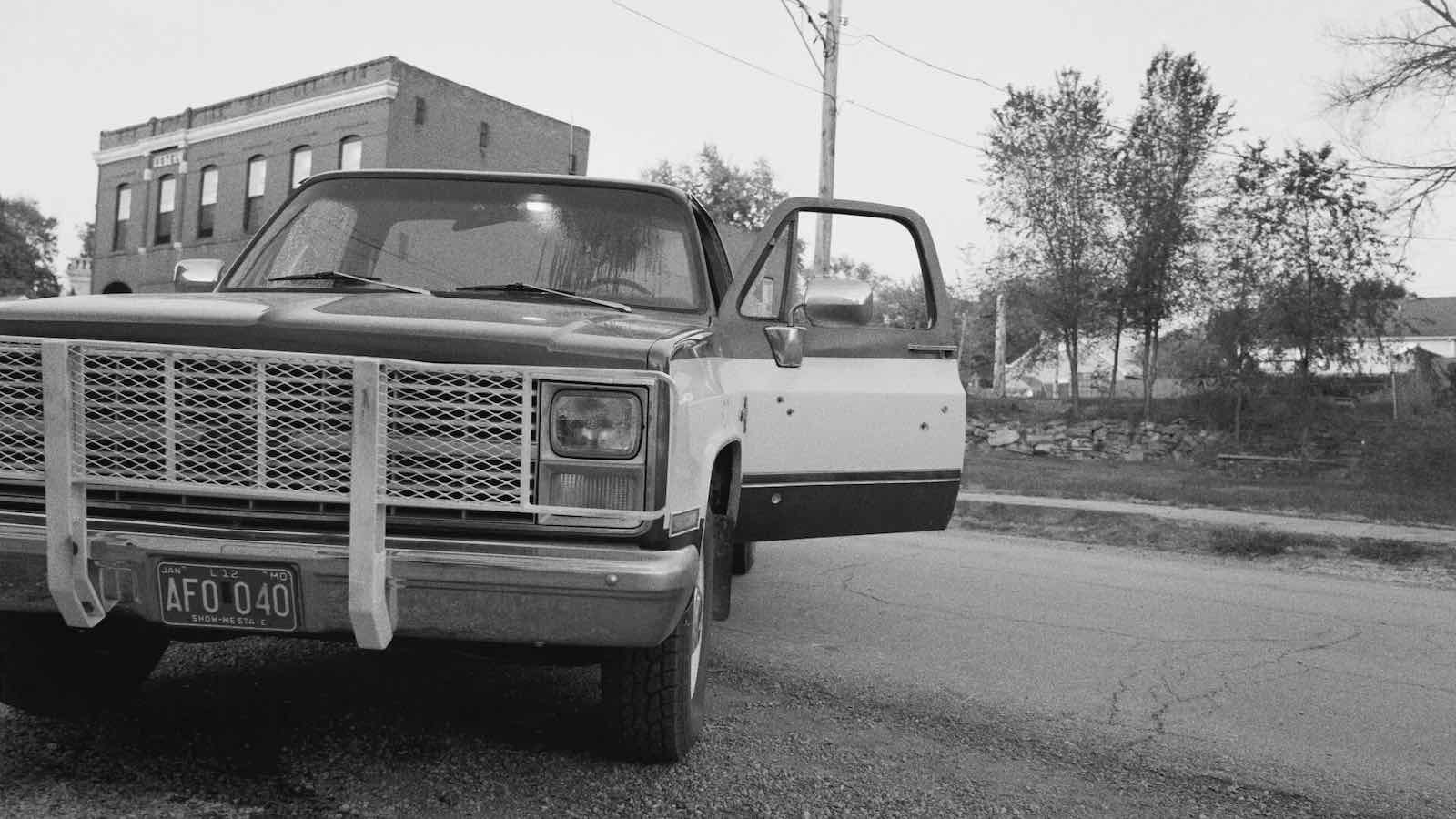 In 1980, one McElroy’s daughters allegedly tried to steal some candy from the store belonging to Ernest “Bo” Bowenkamp and his wife, Lois. McElroy was furious at this and returned to the store to threaten Bowenkamp with a shotgun. During the confrontation, McElroy shot Bowenkamp in the neck. Somehow, the 70-year-old survived the attack. McElroy was arrested for attempted murder.

The young prosecutor of the case, David Baird, however, had a different idea to handle McElroy. While McElroy escaped charges due to his intimidation tactics, the other part was due to his lawyer. Baird didn’t think he could get a conviction for attempted murder, but he knew he could get one for an assault charge. So that’s what he did.

And it worked. McElroy was convicted. He was, however, released depending on appeal. Later that night, McElroy was at the local D&G Tavern where he was overheard making graphic threats toward Bowenkamp. 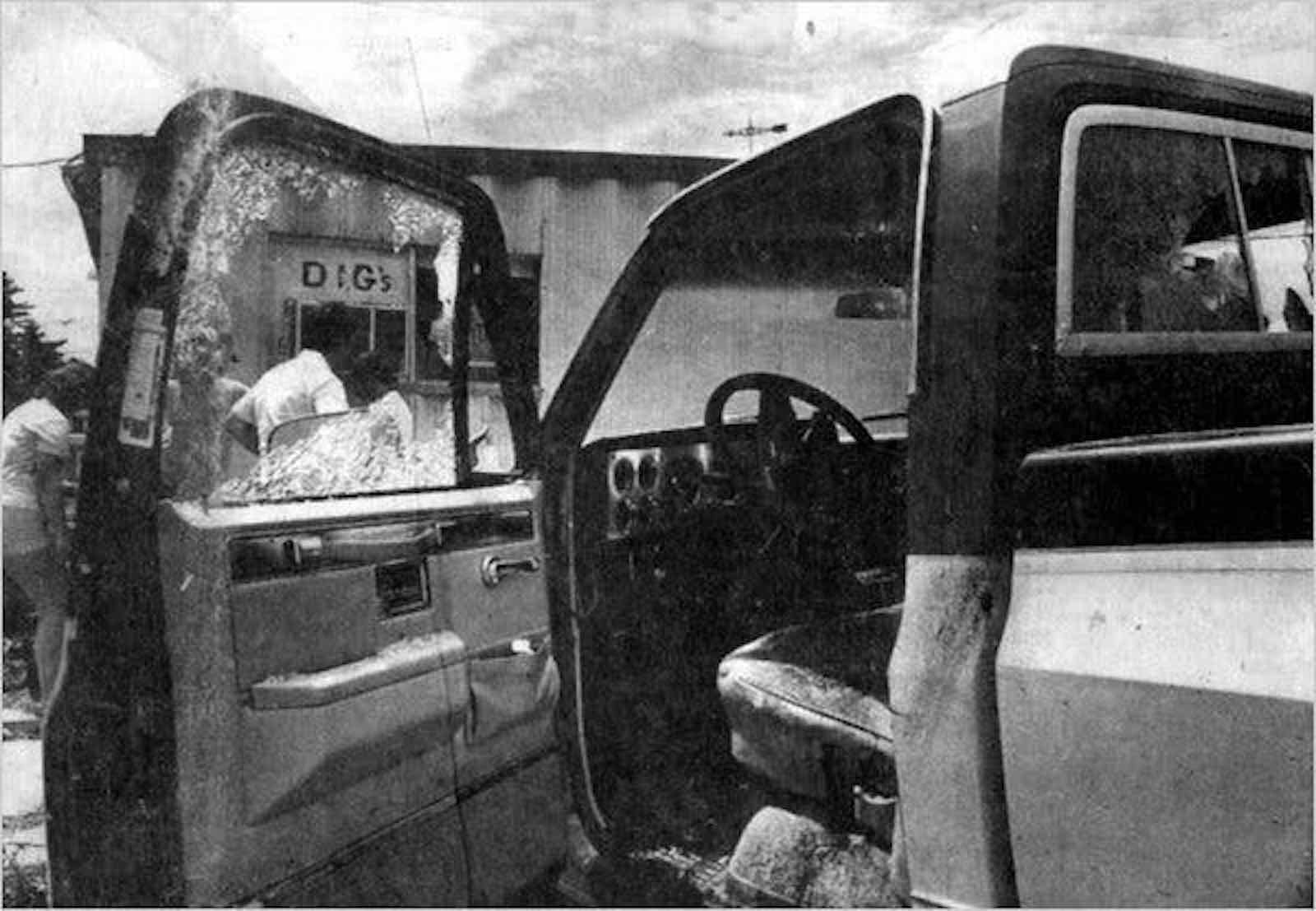 See at the same time, there was a town meeting. Namely what to do about McElroy. The sheriff at the time suggested a neighborhood watch program and that no confront McElroy directly one on one. So the group, hearing about McElroy’s threats over at the D&G Tavern, went to confront him as a group.

What happened next thrust the small town of Skidmore into the spotlight. 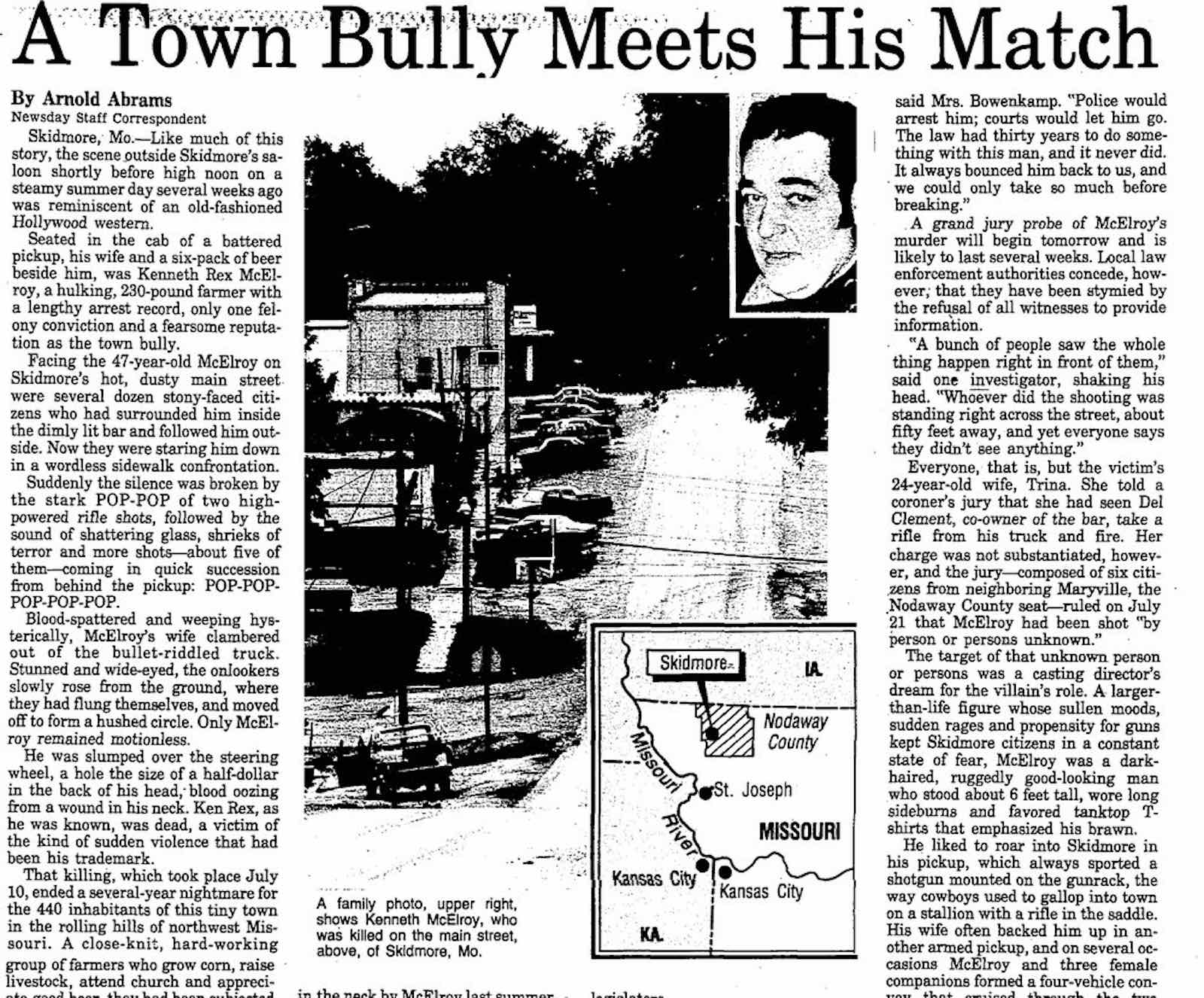 No one saw a thing

McElroy and Trena were in his truck, preparing to leave the D&G Tavern and the crowd of furious onlookers when someone(s) fired upon the truck. Trena survived, but McElroy was not so lucky. He was fatally shot twice by two different guns and the crowd of an estimated 46 witnesses saw nothing.

No one saw a thing. No one called an ambulance. No one even turned off the truck.

At the end of it, McElroy was dead. While Trena claimed to have seen the shooter, could even identify him. No one corroborated her story. All of those people either couldn’t identify the assailant or said that they didn’t see the incident. Local prosecutors denied to press charges, not that there was person to press charges against. Even with a federal investigation, nothing came of it. 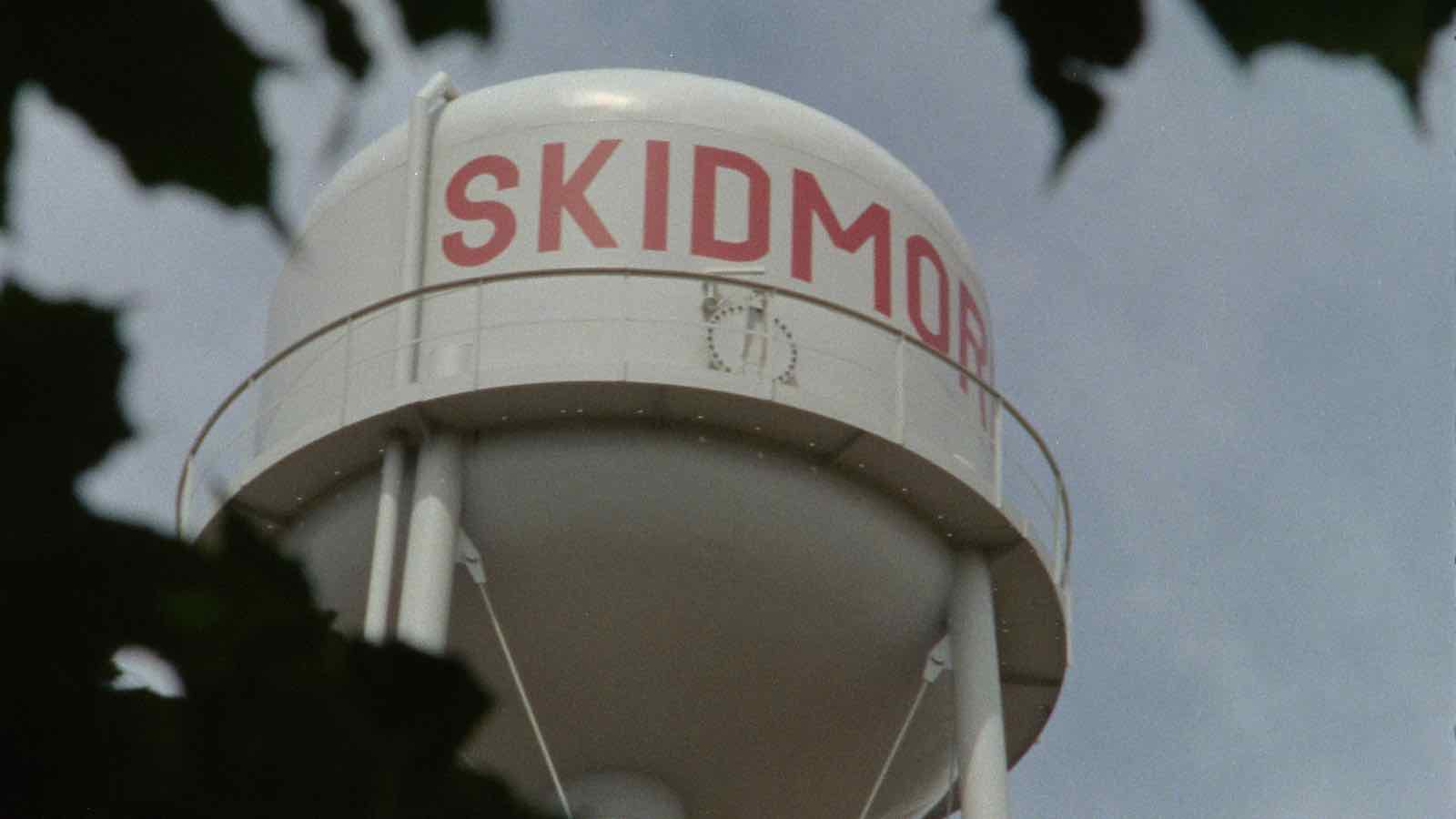 The town of Skidmore had closed ranks and no one was talking.

In the aftermath, Trena sued the town for $6 million dollars along with one of the men she swears was one of the shooters. She settled out of court for $17,600 and no one admitted wrongdoing. Trena would leave Skidmore, remarry, and pass away at the age of 55 in 2012. 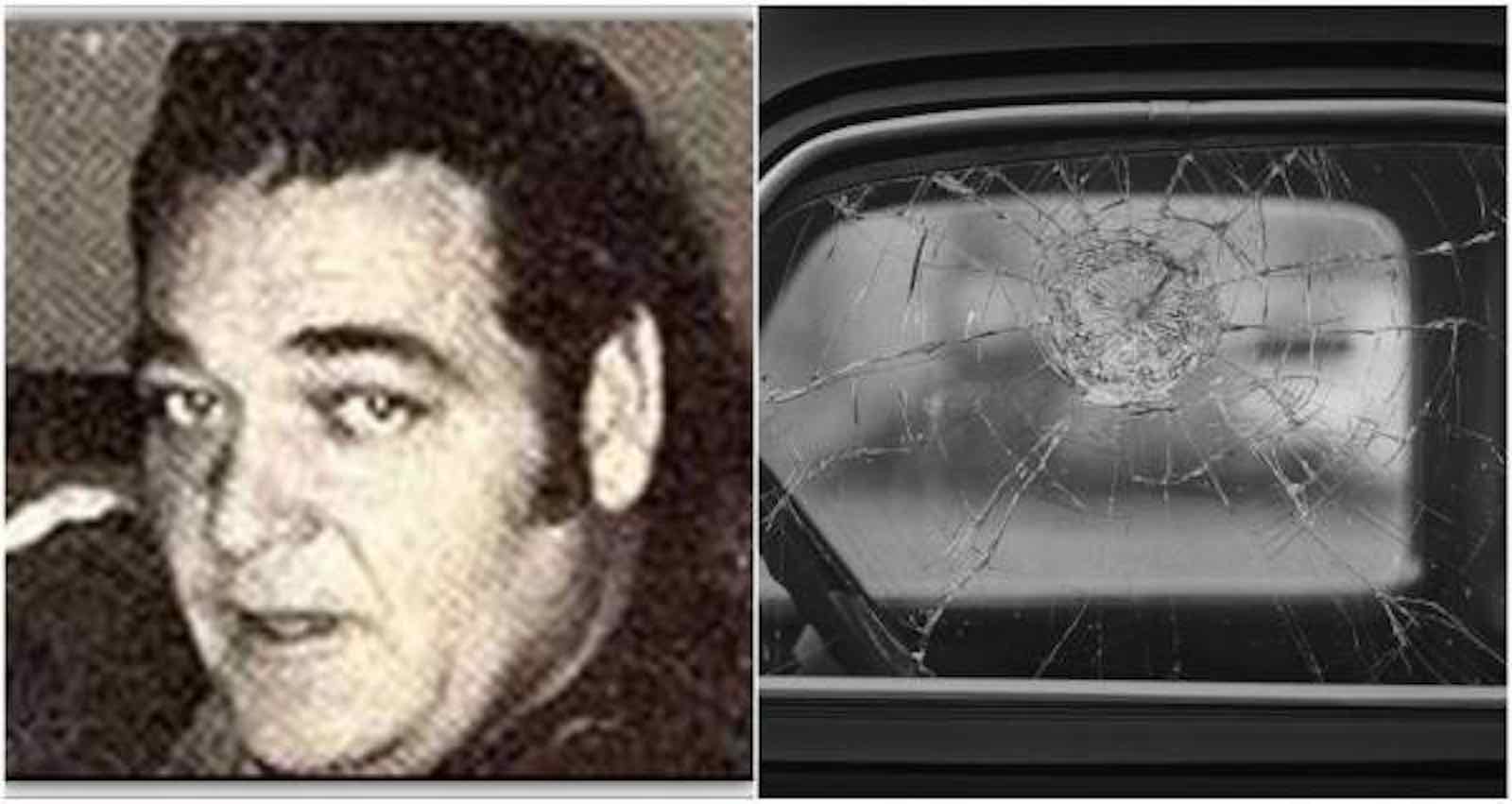 That’s probably what’s caught our attention on the case. It seized international attention from the onslaught and the story spread like wildfire, viral in a way that we only really see today. There have been books on the case, an episode of 60 Minutes, internet sleuths, and, more recently, a docuseries called No One Saw A Thing all profiled the case. And through it all, Skidmore has remained quiet.