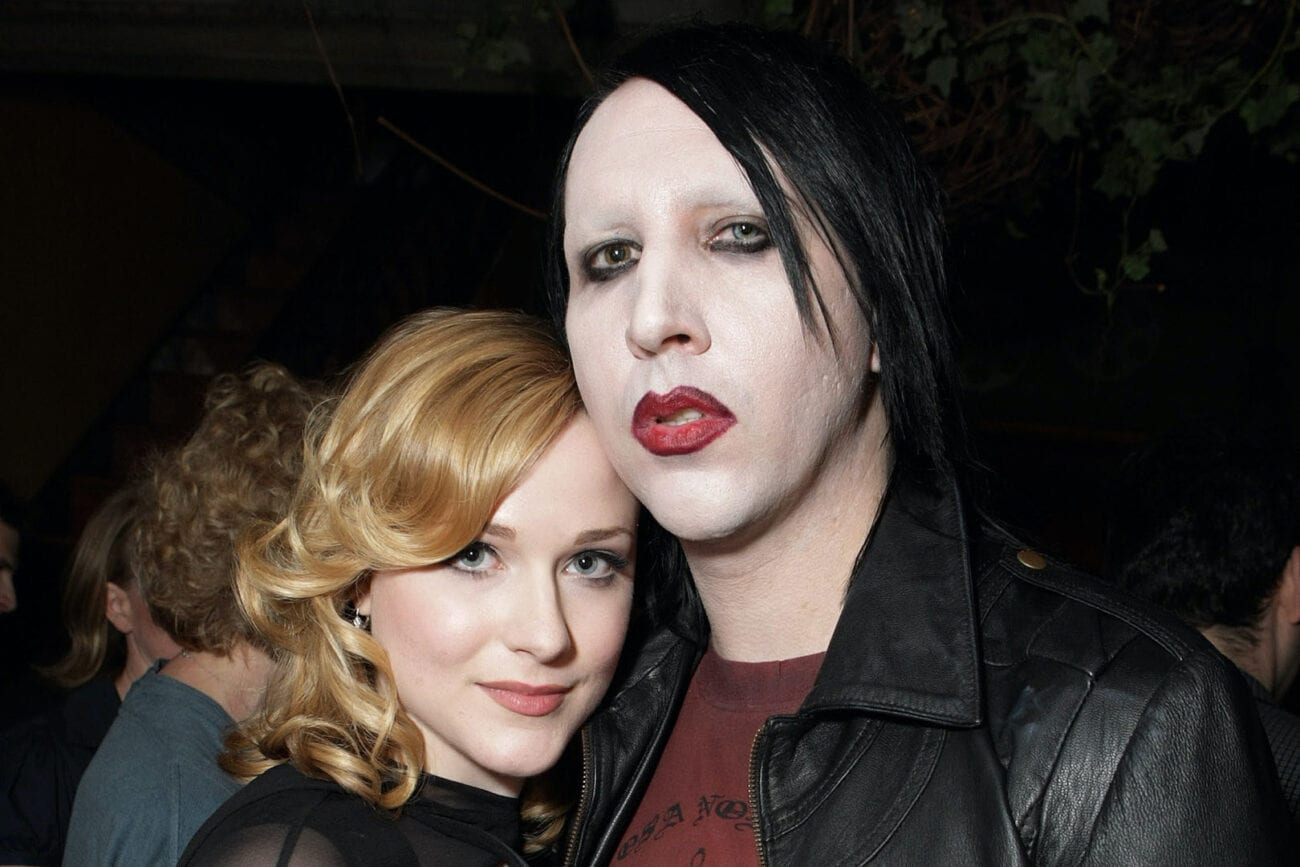 Marilyn Manson built his career on shock & controversy, and he may be in the limelight once again for abuse allegations from his former girlfriend, Evan Rachel Wood.

Several hours ago, Evan Rachel Wood took to her Instagram to finally name her abuser. She had been telling fans & followers that she has been abused for quite some time now but didn’t name him out of fear of retaliation. Now, she dropped his identity: Brian Warner, more commonly known as shock rocker Marilyn Manson.

From Wood’s post, she stated that Manson “started grooming me when I was a teenager”. She was nineteen when she & Manson were engaged. Let’s take a look into their history together and see whether or not Manson will continue to, as Evan Rachel Wood said “cause more harm”. Or if, as Manson’s reps have maintained well before Wood’s recent post, Manson didn’t lay a hand on Evan Rachel Wood. 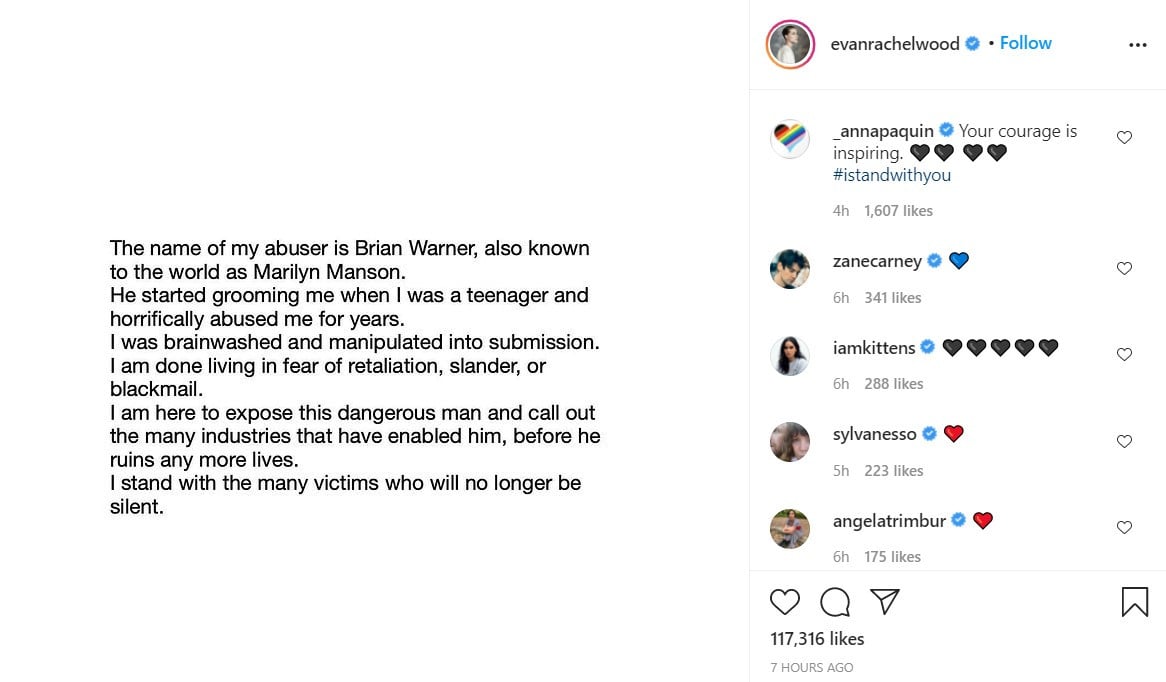 Marilyn Manson & Evan Rachel Wood got engaged when Wood was nineteen years old in 2007. Per JustJared, their relationship ended after several months and under mysterious circumstances. In fact, fans speculated that when Wood first began speaking out about her abuse, she was referring to Manson.

Evan Rachel Wood further said she would cut her wrist to “disarm” her abuser, or make him stop. She also said she was too terrified to leave, ending her post with the hashtag #IAmNotOK. Since then, she’s retweeted abuse survivor stories and posted images to raise awareness about abuse and how narcissists & sociopaths control their victims. 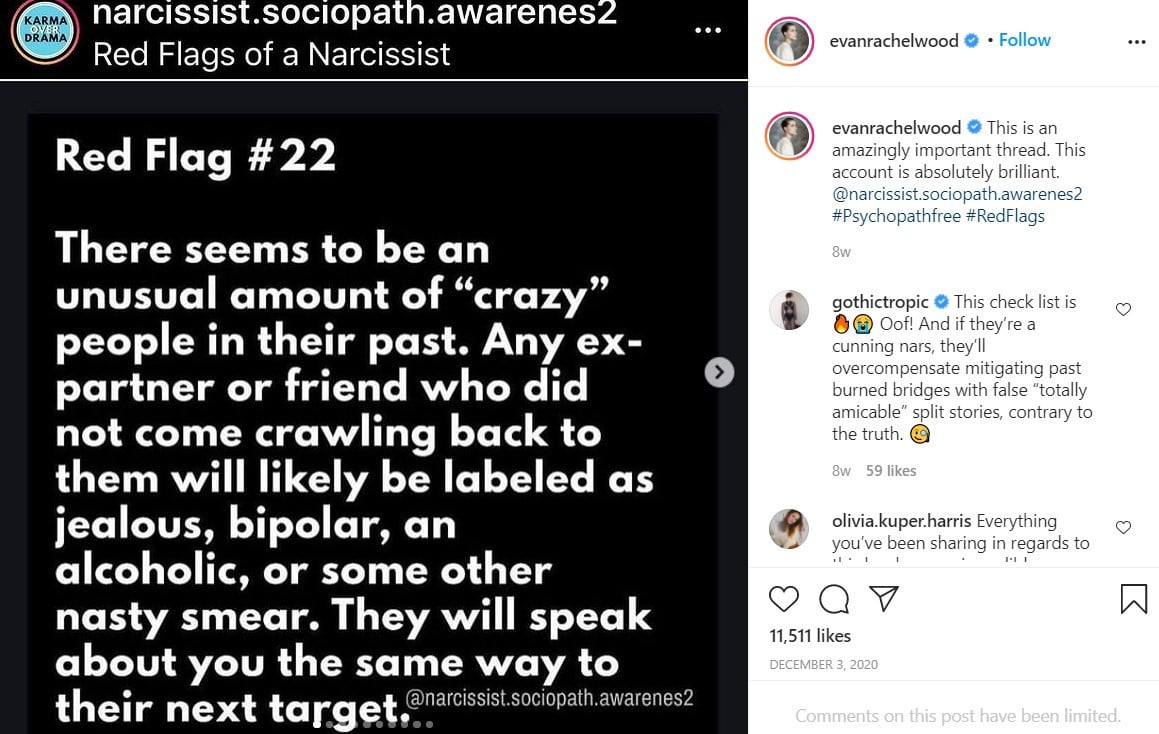 JustJared further detailed that Marilyn Manson abruptly ended an interview with Metal Hammer when questioned about the allegations, and Manson’s reps denied the claims long before Wood went public with Manson’s identity this morning.

“It is my understanding that Evan Rachel Wood dated multiple people around the time she was dating Manson. Basic internet research will give you a host of other names that have not come up in any of our discussions,” Manson’s reps said. They also pointed to interviews where Wood “spoke positively” about her relationship with Manson.

The reps also addressed threats Marilyn Manson allegedly made against Evan Rachel Wood in Spin magazine in 2009, claiming his remarks were “a theatrical rock star interview promoting a new record”. Said remarks? Allegedly fantasizing about beating Wood with a sledgehammer. In the same interview, he also said he “cut himself 158 times a day” which his agents also claimed was braggadocio to promote his new album. 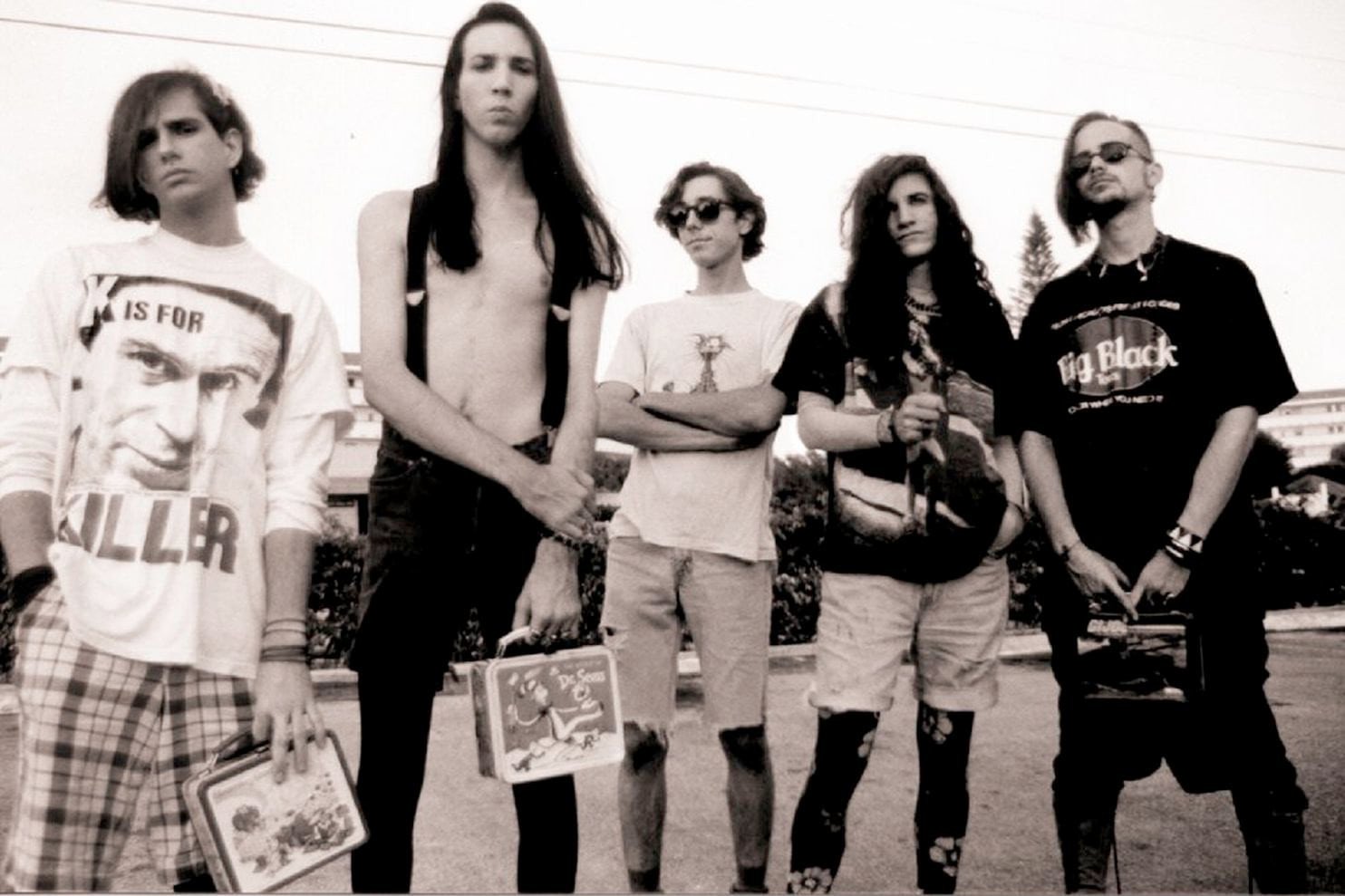 Also joining him in the lineup were Daisy Berkowitz, Madonna Wayne Gacy, Zsa Zsa Speck, and many others who came & went since the band’s formation in 1989. Manson hit fame when his music & shocking concerts caught the attention of Nine Inch Nails mastermind Trent Reznor. Manson was signed to Nothing/Interscope records and dropped the hit album Portrait of an American Family in 1994. 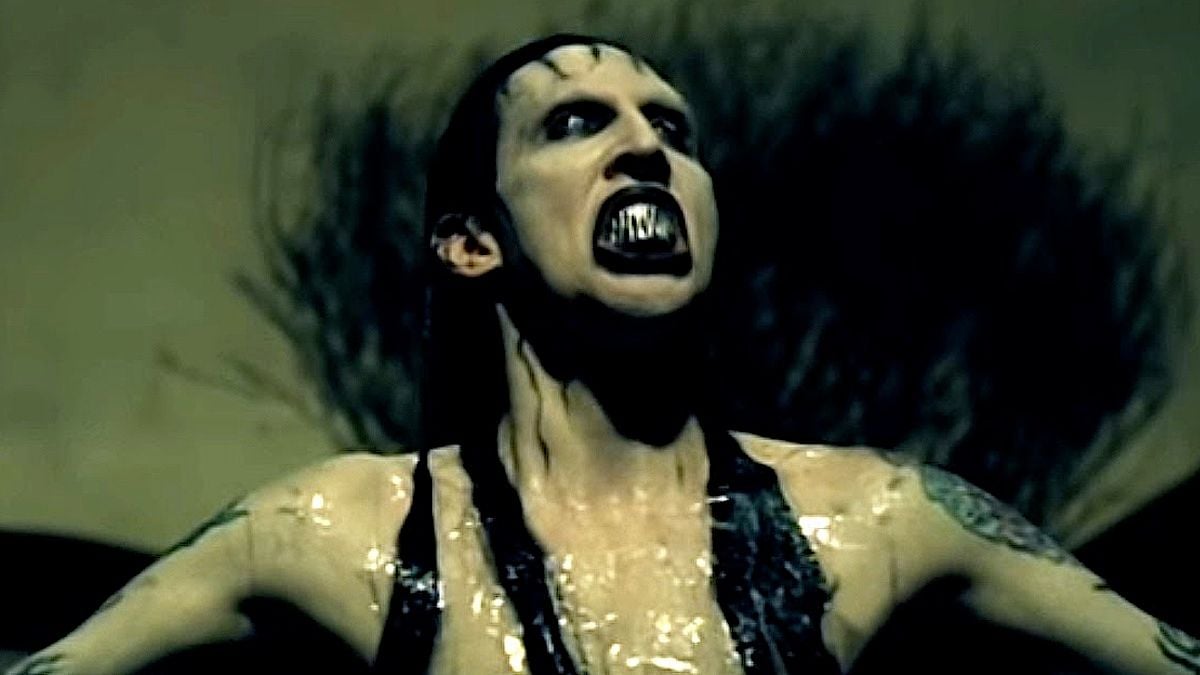 At his peak in 1999, talking heads and moms everywhere blamed Manson for the Columbine Massacre, since perpetrators Eric Harris & Dylan Klebold were reported to be wearing his band’s T-shirts in initial coverage of the massacre. Amid the controversy, his album from the following year, Holy Wood, sold to more modest numbers than his previous albums enjoyed.

Metal Hammer pointed out that Marilyn Manson’s waning influence was due to there being new acts for parents to loathe. “By the turn of the century, Manson was no longer America’s demon dog. White trash superstar Eminem had clocked his position and supplanted him,” they exclaimed. As rap supplanted metal & shock rock as the “controversial” music genre, Manson remained a household name but reportedly lost his edge. 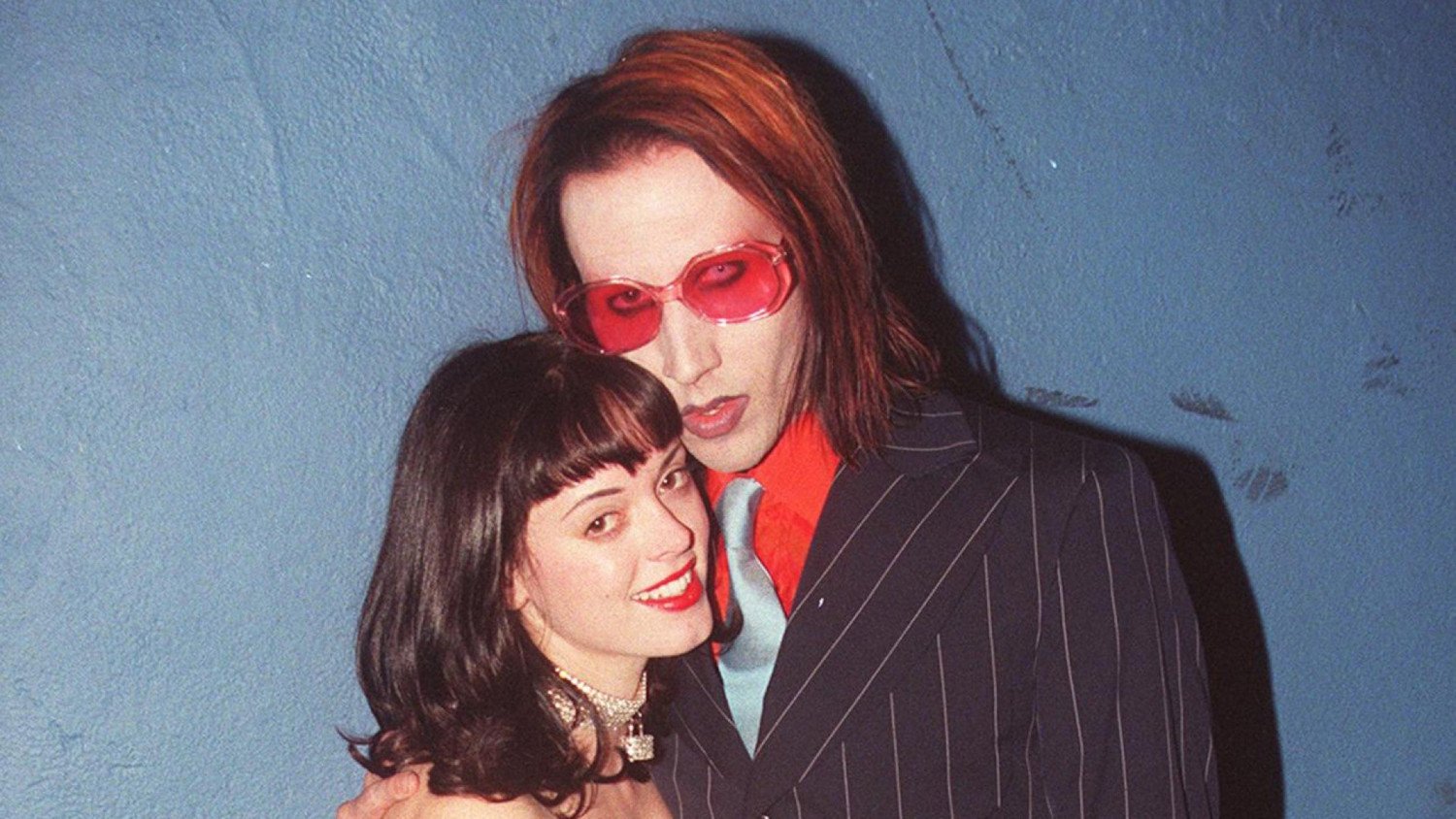 Throughout his career, Marilyn Manson had several noteworthy relationships, including with pinup model Dita Von Teese and actress Rose McGowan. The latter was dating Marilyn Manson at the time she said convicted sex offender Harvey Weinstein abused her. However, in an interview with UK’s Channel 4, Manson said he wasn’t aware of Weinstein’s actions, but detailed that Weinstein’s movies shouldn’t be banned due to the allegations.

“That’s not to disrespect the people who are saying these allegations, I just think that if you have something to say you should say something to the police and not the press,” Manson said. He also noted that he didn’t want sex abuse allegations “to turn the whole world’s attention from the artistic element of Hollywood” per Exclaim magazine, who also pointed out his connection with another accused abuser: Johnny Depp. 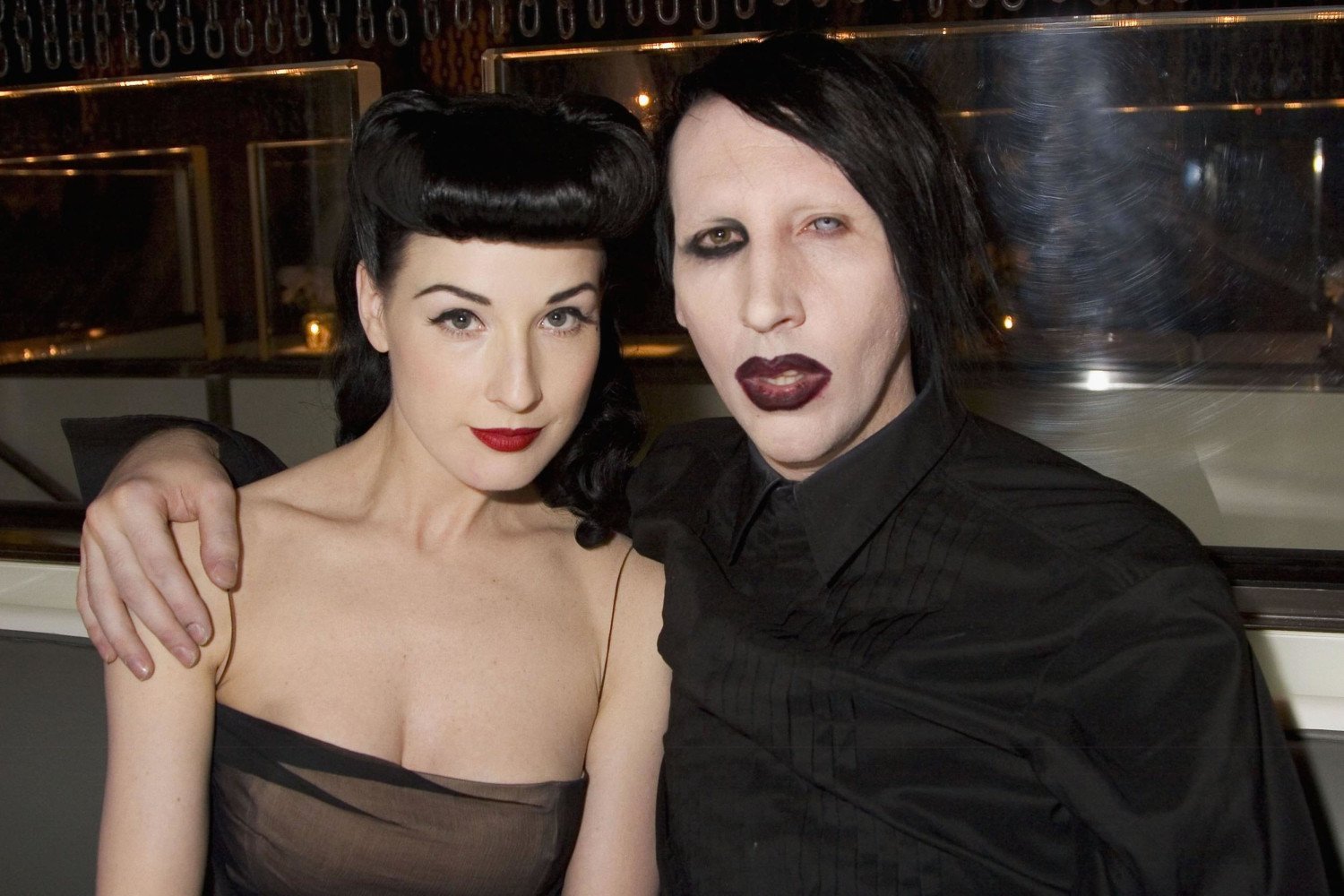 Manson’s relationship with McGowan ended badly when, according to McGowan, he “trashed” her on Howard Stern’s radio show. However, McGowan detailed their relationship having “surprisingly normal” moments in her memoir.

In a 2007 interview with Harper’s Bazaar, Dita Von Teese alleged that her relationship with Marilyn Manson also ended badly. “Let’s just say that it must have been something pretty bad for me to move out of the house after six years together and to pack up my stuff on Christmas Eve. I loved him, and this was the most painful thing I have ever had to go through. It’s been really difficult,” she told the magazine.