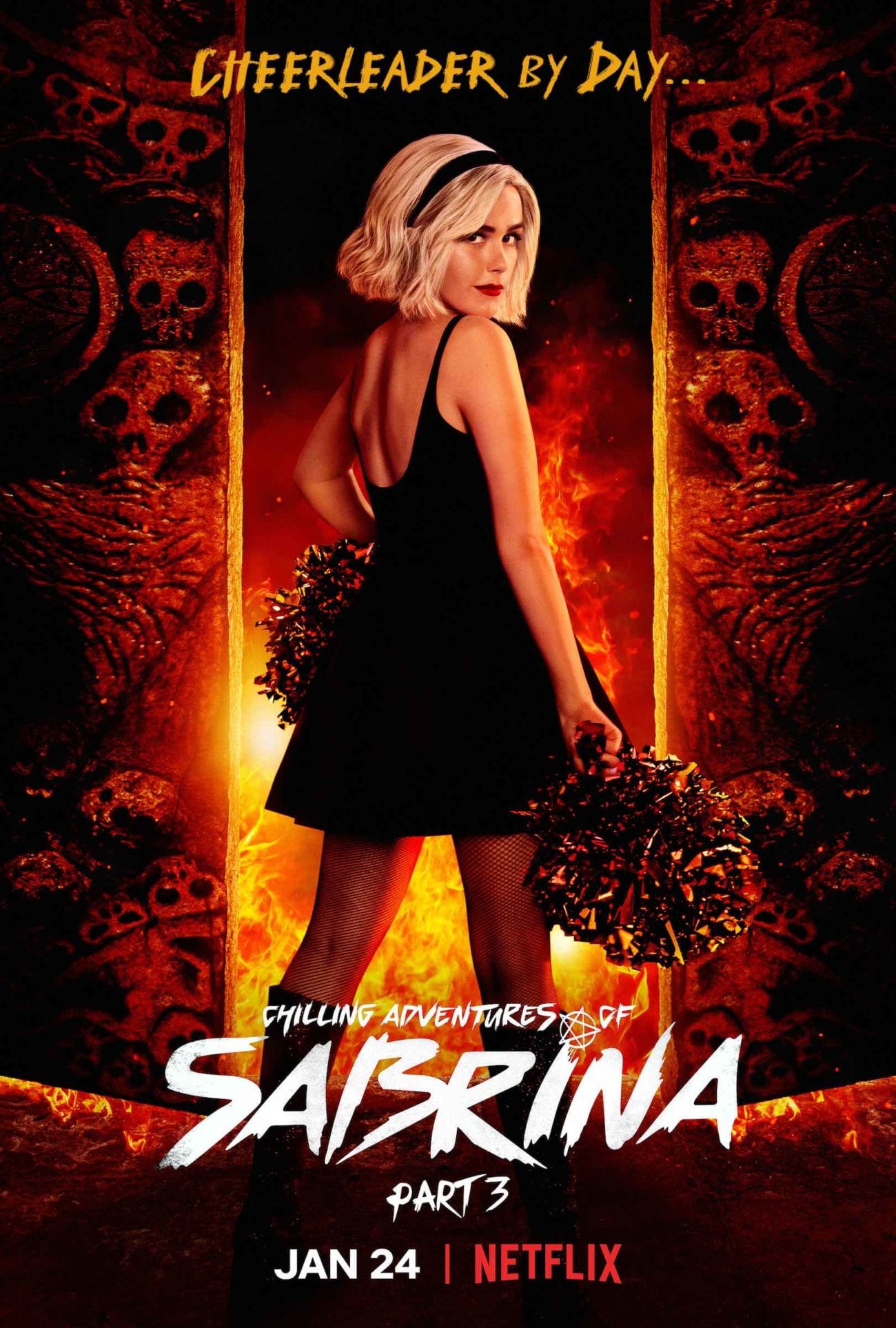 ‘Chilling Adventures of Sabrina’ S2: Get your first look here

A true poet of our time Billie Eilish once sang, “All the good girls go to Hell”. In the case of Netflix’s The Chilling Adventures of Sabrina (CAOS), she’s not wrong there. With season two (parts three and four) on the horizon, we’re more than ready to see how far Sabrina (Kiernan Shipka) is ready to descend into the depths of Hell to save her boyfriend Nicholas Scratch (Gavin Leatherwood).

With the premiere of part three just weeks away, we’ve been waiting for a trailer to drop. All over the CAOS social media pages, there have been teasers for something dropping. We were expecting the trailer for part three. Instead, we got a fever dream of a music video that may also be our trailer?

Let’s take a minute and talk about CAOS’s “Straight to Hell”.

A rundown of the wildest moments in “Straight to Hell”

After watching “Straight to Hell” approximately a million times and deciding it is the masterpiece of CAOS, we need to run down some of our favorite moments of the video. Praise Lillith for this camp masterpiece that we needed in the Year of the Dark Lord 2020.

The sets are transparently fake and look like something from those dance breaks in the Austin Powers movies, but darker.

Kiernan Shipka was probably given the loosest direction possible and looks like she’s unsure about what’s supposed to be doing half the time. 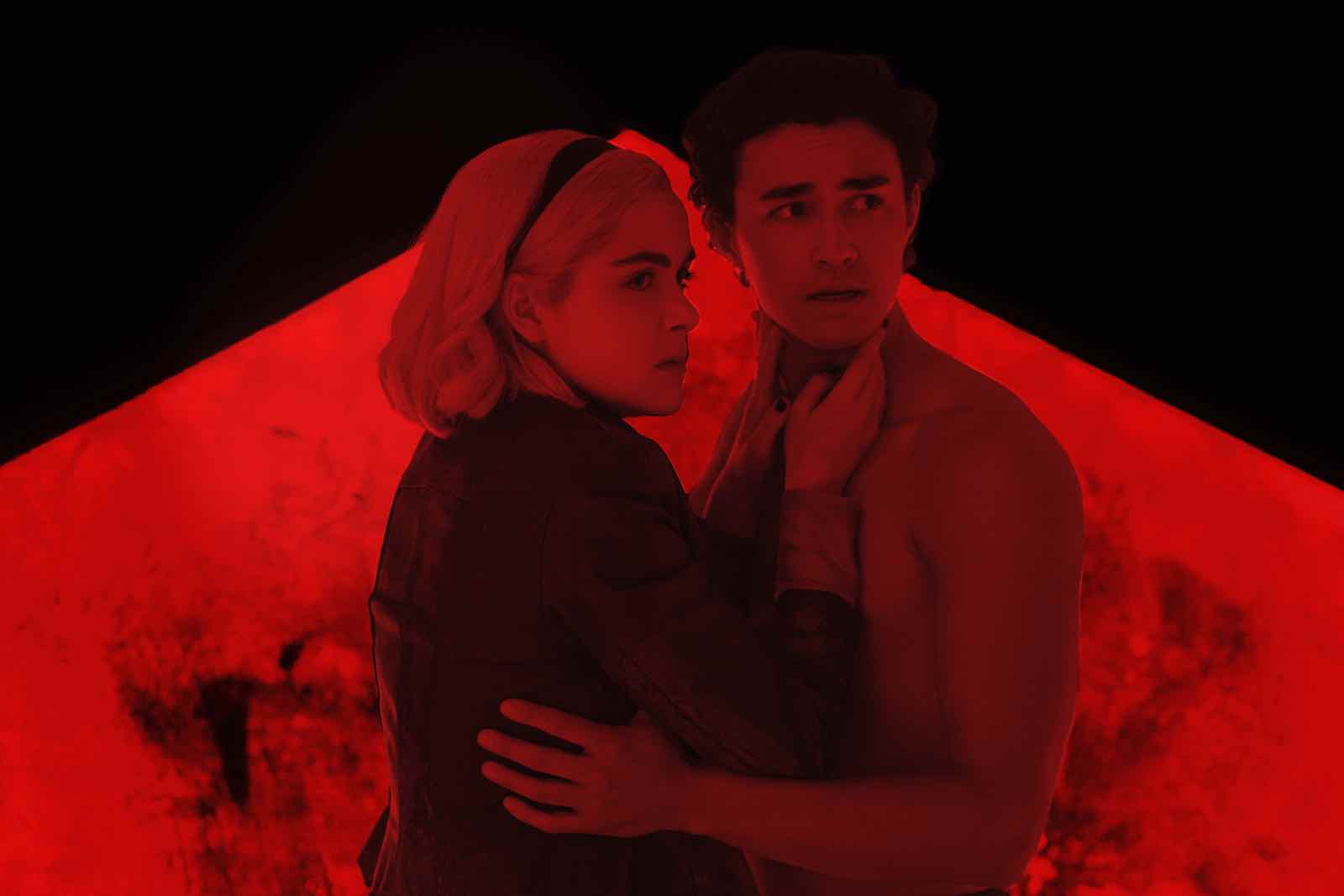 The other half of the time Shipka is clearly trying not to laugh.

Gavin Leatherwood is shirtless and bound in change. He vacillates between being sexy in chains and then looking like he’s in pain.

Ross Lynch is there, hanging out in his Nightmare on Elm Street inspired crop top. He’s also wearing a chain around his neck for some reason.

Tati Gabrielle has like a rose and a skull for like two seconds? Where did she get them?

Shipka walks through the fakest forest you have ever seen on modern television. She runs into Leatherwood, who turns into Luke Cook. Because, you know, Nick is possessed by Lucifer. 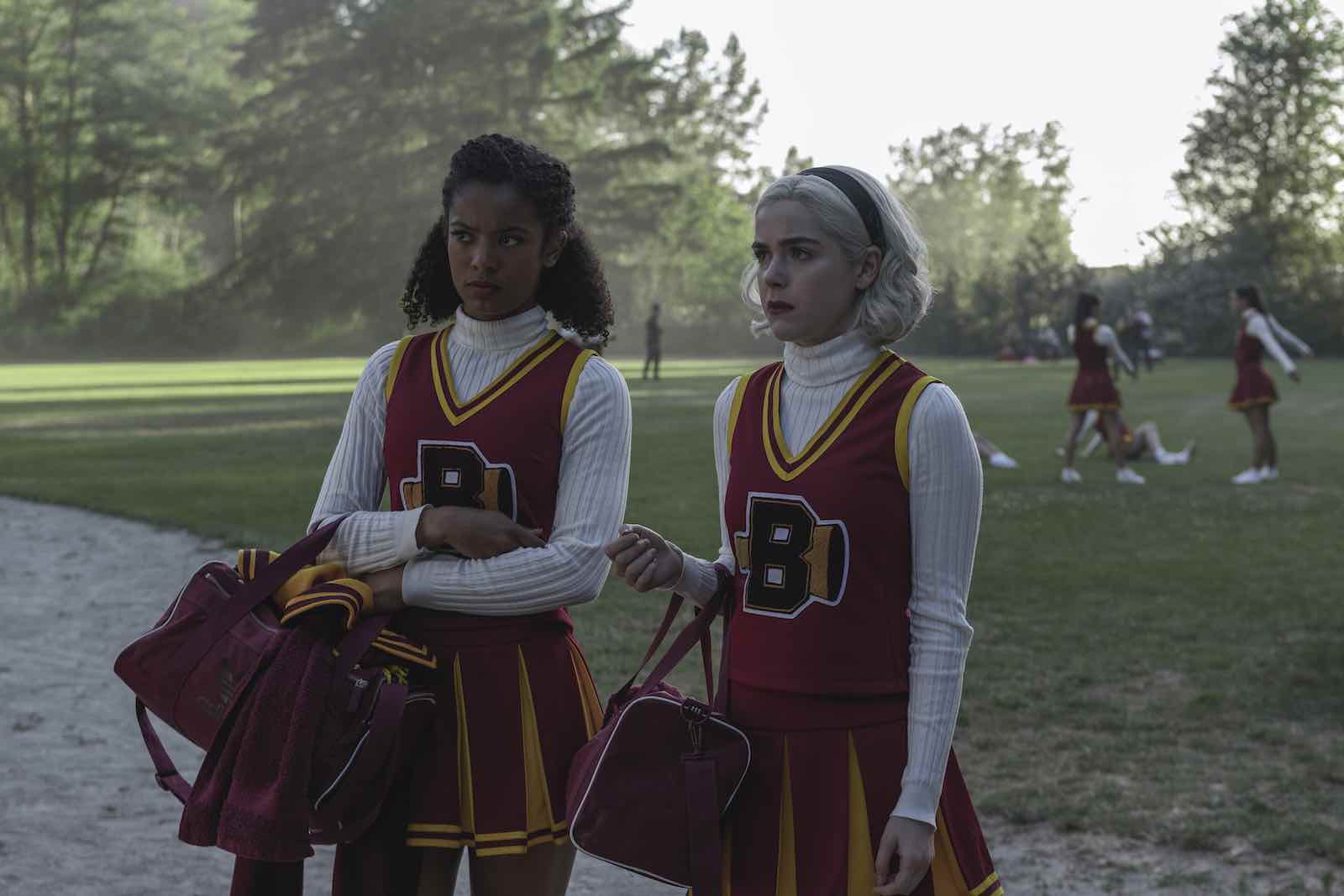 For some reason, when Leatherwood turns into Cook, there’s a torch-lit behind him. There are no torches in the fakest forest.

There’s a point where Shipka sits on the throne and the cheerleaders just continue dancing around it? Sure.

It ends with Shipka waking up, looking like she had a nightmare instead of the fever dream we all witnessed. 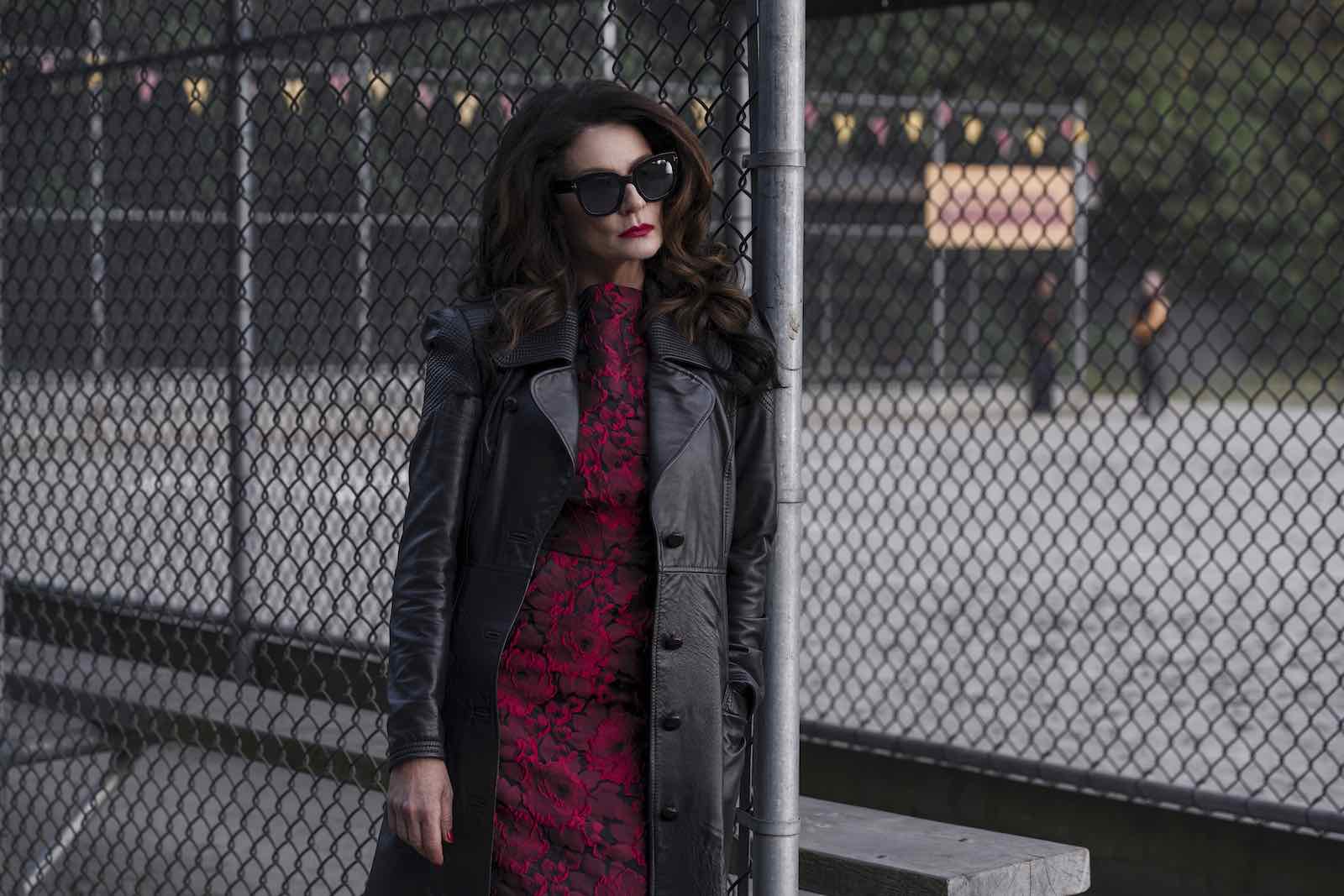 What do the CAOS fans think about “Straight to Hell”?

Clearly, CAOS is bringing the energy with “Straight to Hell” for fans starving for more of their beloved witches, demons, and mortals. Needless to say, fans jumped right on “Straight to Hell” in a way that would make you think of the “Feast of Fiends”.

DavidOpie declared that the CAOS music video gave the gays everything they wanted.

“The new #Sabrina trailer is the definition of “giving the gays everything they want” meme. #CAOS”

RedmondSurvivor said that “Straight to Hell” is just proof that the CAOS are having the time of their lives. 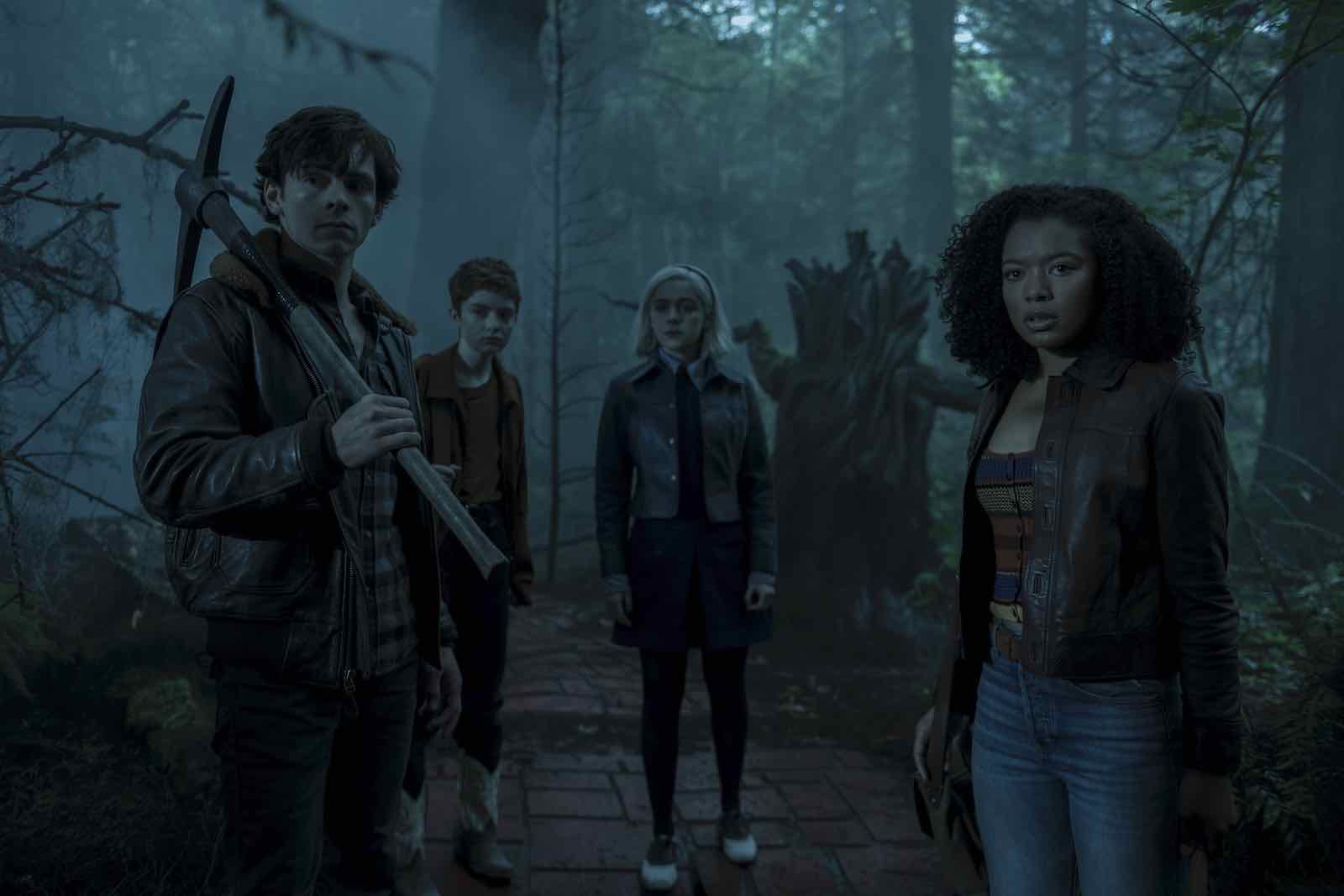 “No show is having as much fun as @sabrinanetflix I mean, who else puts out a trailer in the form of a music video? New season starts on the 24th, and yes, I’ll once again be recapping each episode! #CAOS”

Nabrina fans were weak over everything that happened, according to jackiebukharts. 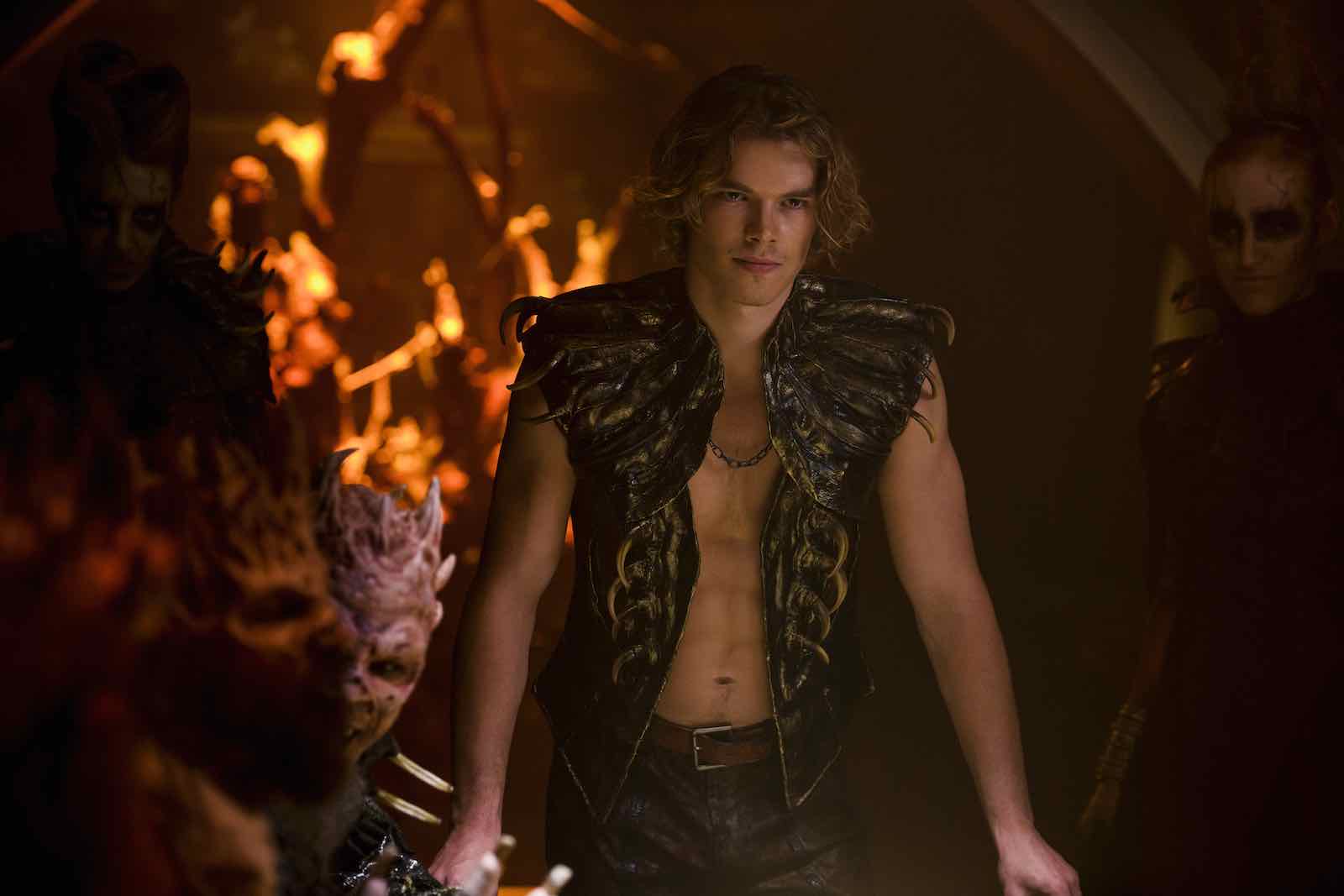 Some CAOS fans, however, weren’t really feeling “Straight to Hell”. A lot of the fear is that CAOS will go down the bonkers path of cousin series, Riverdale.

One fan who was not feeling “Straight to Hell” was lgbtzelda.

“that caos trailer was,,,,,,, bad. smells too much like riverdale. keep it”

Another fan not liking it, remustlupin, shared that it brought up an anxiety a lot of CAOS fans feel. 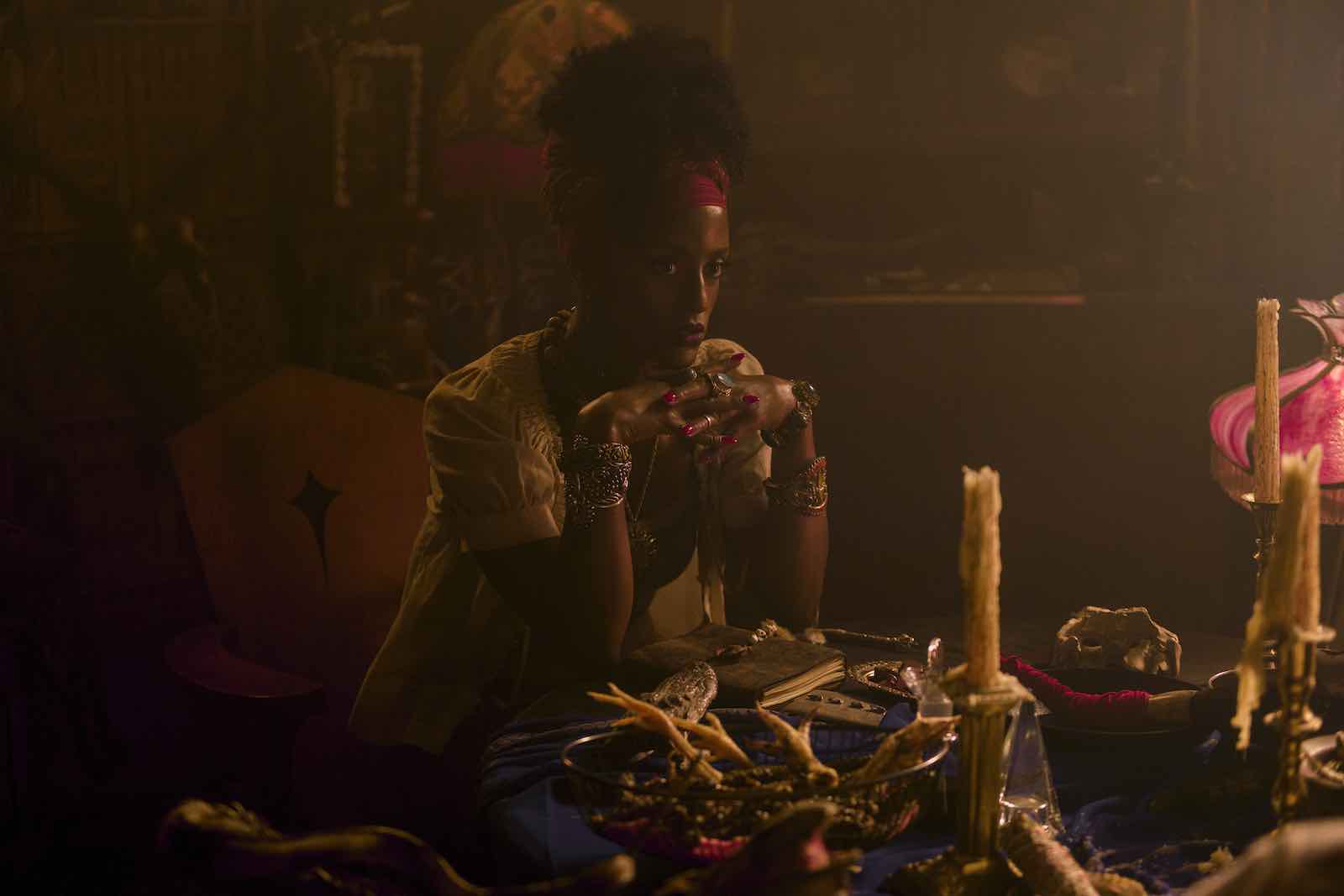 Even though there is some nerves amongst the CAOS, fandom we think the song is kind of a bop. Twitter’s tamsynstrike summed up our feelings pretty well.

“Just when you think you couldn’t love #CAOS any more, they drop this mega bop! ???” 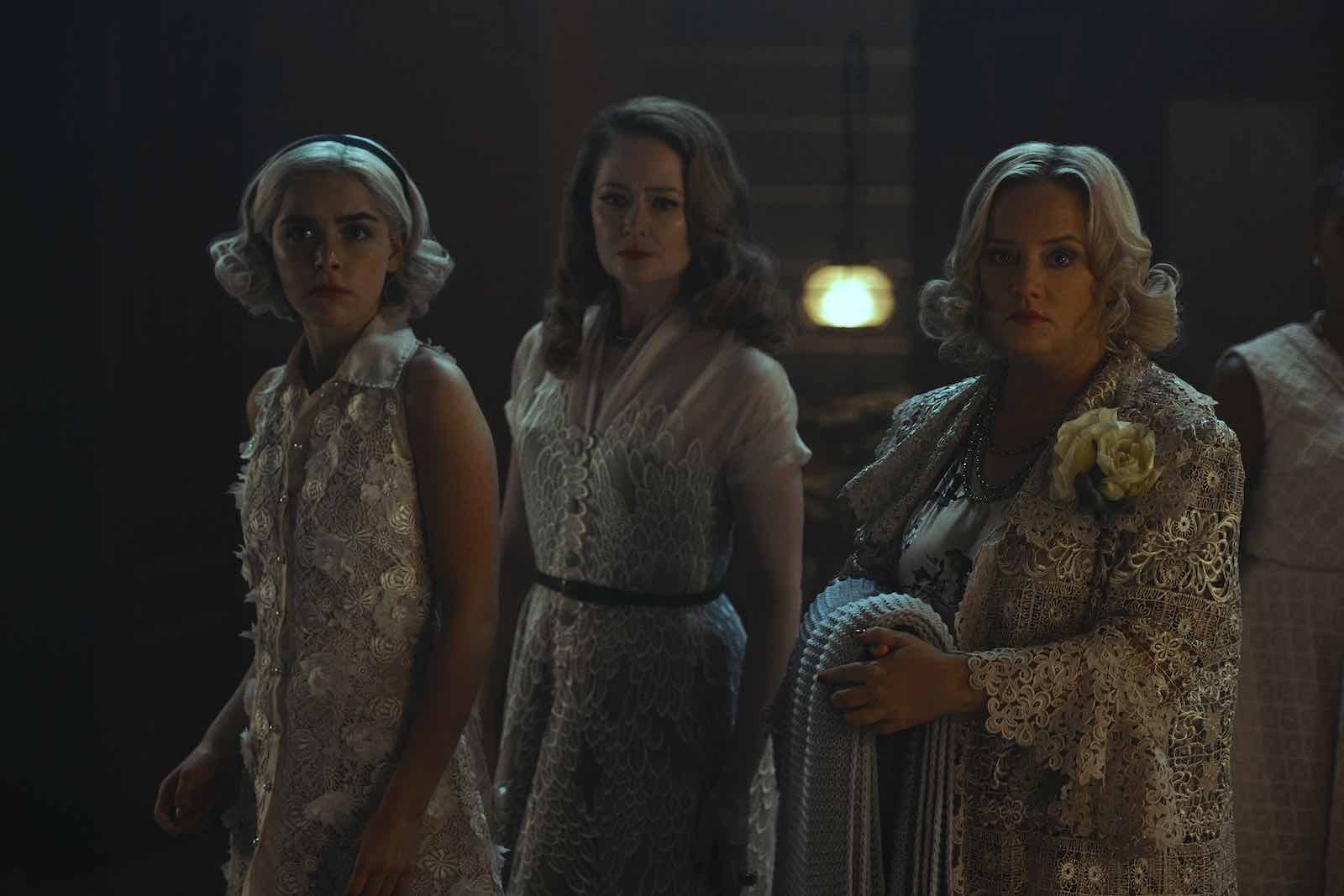 What did we learn about CAOS part three from “Straight to Hell”?

Good news fans, we actually saw a little bit of new footage from the upcoming season of CAOS spliced into the music video. We have some takeaways from it.

In the footage shown in the music video, we see Nick chained to a rock, nearly naked, and in the center of a pentagram. Perhaps this is the only way that Lilith (Michelle Gomez) can make sure that Lucifer remains locked up?

We also see Lilith in snapshots as she tries to rule Hell, but there are challengers for her throne. She’s also wearing like an exo-skeleton? Whatever makes her happy.

Also, it looks like Harvey, Roz (Jaz Sinclair), and Theo (Lachlan Watson) who form a band. “Straight to Hell” is by Sabrina Spellman and something called “Lovecraft”. Is that the band’s name? 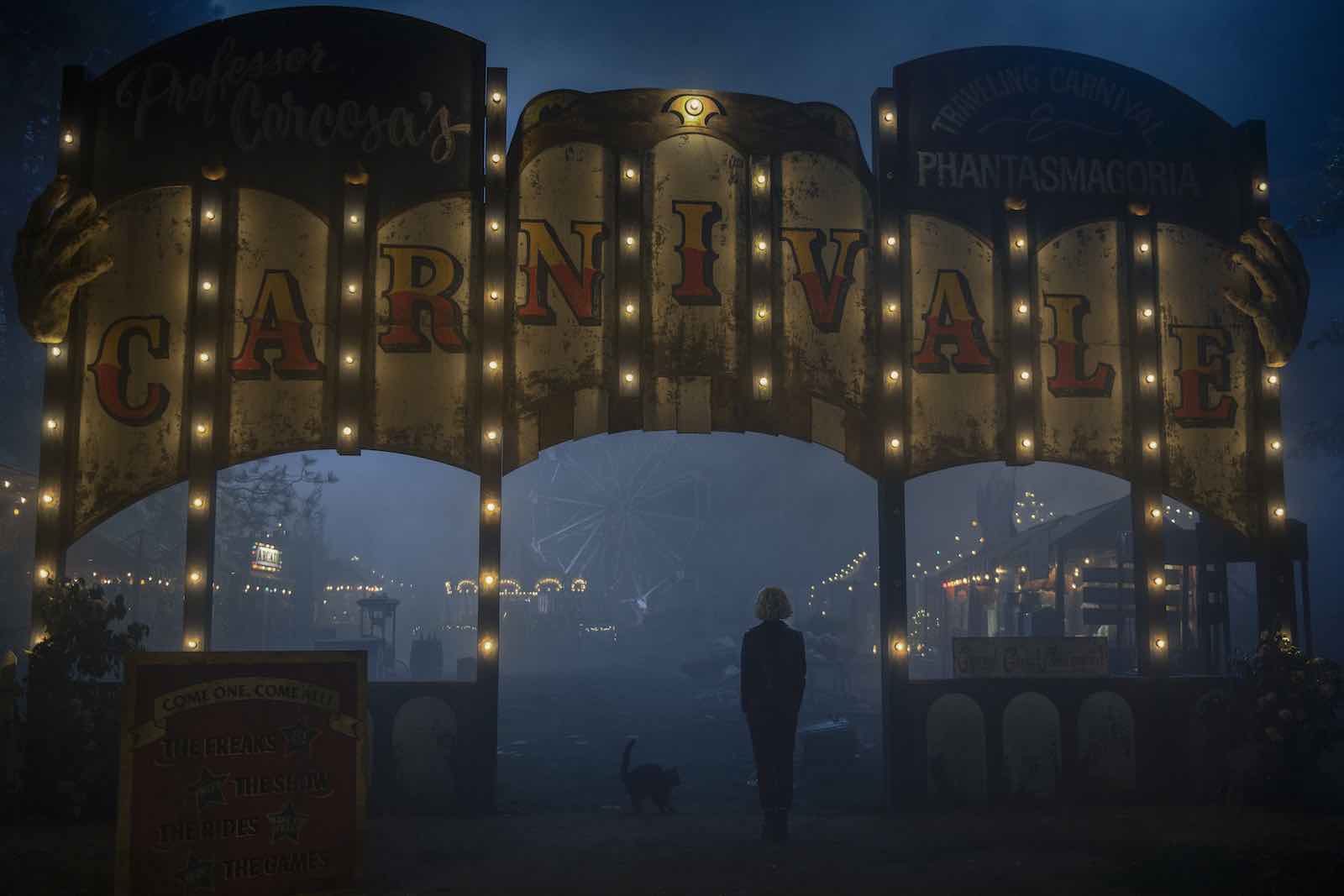 We also see the three mortals walking through what looks like a field of crucifixes. Theo is definitely shocked to see someone on that cross. Could they have found a way into Hell?

Also in the trailer, we see Ambrose and Prudence search for Father Blackwood (Richard Coyle) to take their vengeance on him.

We also see snatches of Zelda (Miranda Otto) and Hilda (Lucy Davis) as Zelda leads the new Church of Lilith. 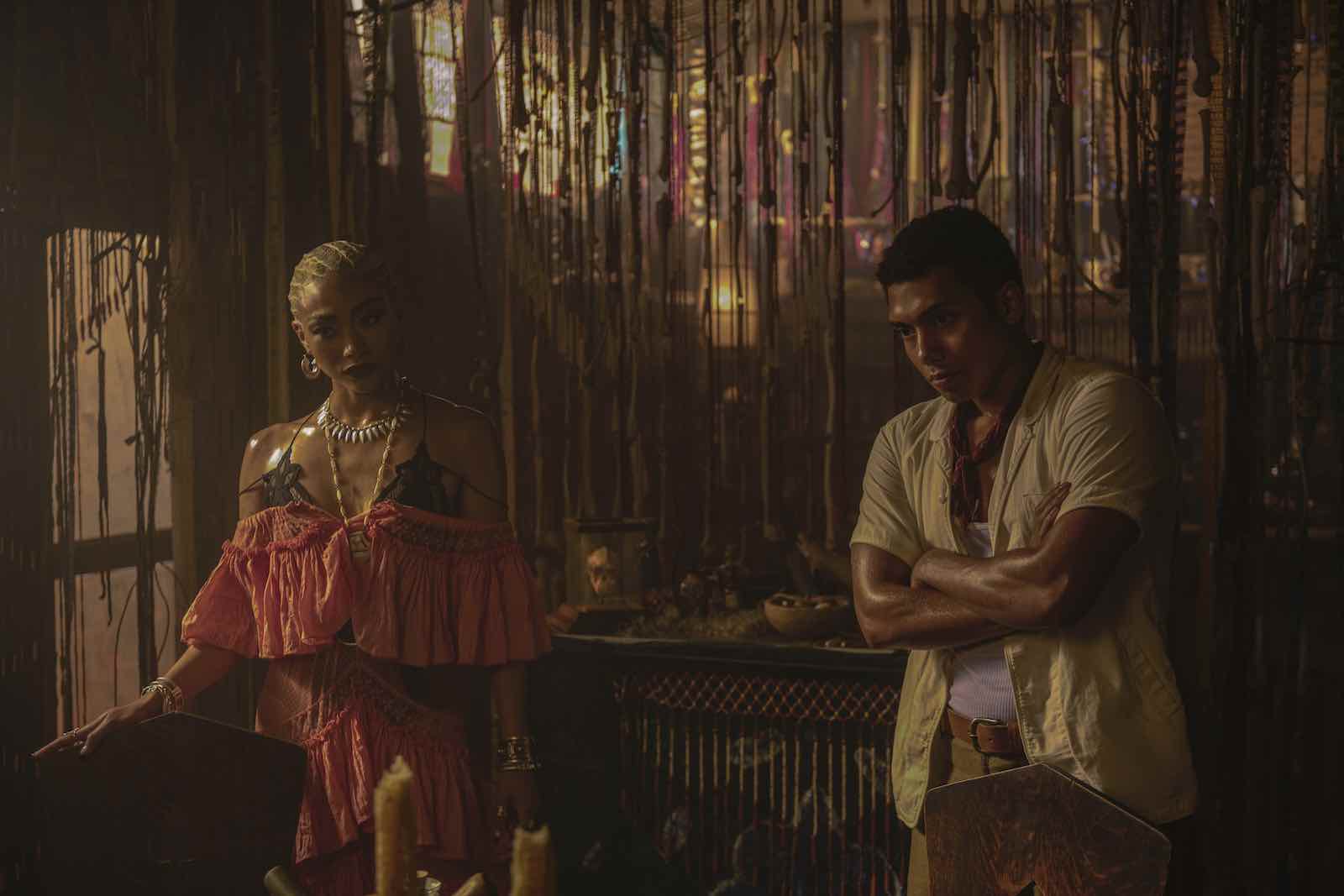 What do we know about CAOS part three?

The eight-episode part three will be released on Friday, Jan. 24. Netflix released a synopsis for the upcoming season, which is definitely length. It boils down to Sabrina and her friends go to Hell to save Nick. There’s a political shift in Hell with Lucifer’s in disposal. While Sabrina’s dealing with Hell, a mysterious new carnival comes to town.

“Part Three finds Sabrina reeling from the harrowing events of Part Two. Though she defeated her father Lucifer, the Dark Lord remains trapped within the human prison of her beloved boyfriend, Nicholas Scratch. Sabrina can’t live with herself, knowing that Nick made the ultimate sacrifice and is suffering, burning in Hell under Madam Satan’s watchful eye. 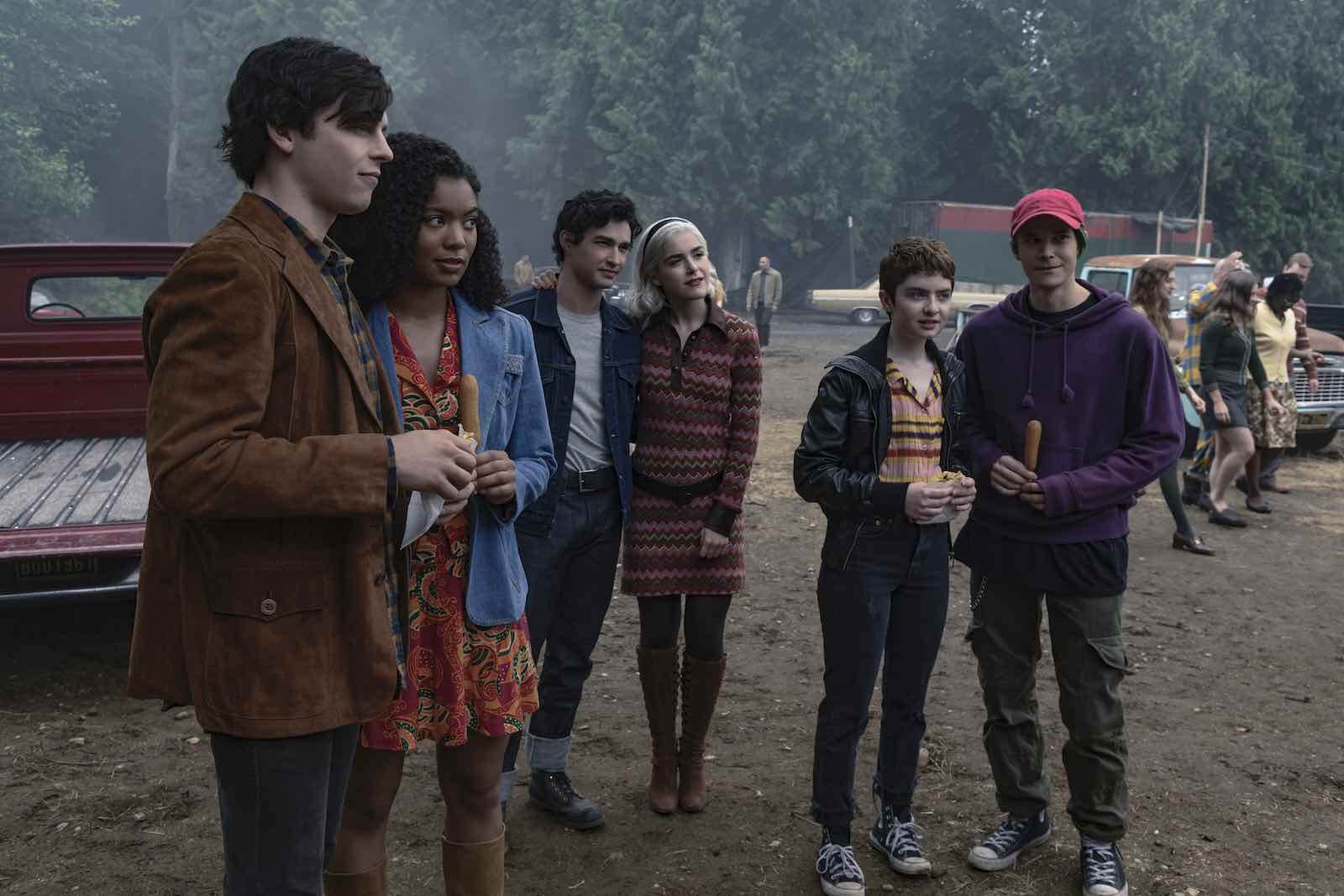 So with an assist from her mortal friends, “The Fright Club” (consisting of Harvey, Rosalind, and Theo), Sabrina makes it her mission to free him from eternal damnation and bring him back into her arms.

However, the Dark Lord’s unseating has sent shockwaves through the realms—and, with no one on the throne, Sabrina must assume the title of “Queen” to defend it against a challenger, the handsome Prince of Hell Caliban. Meanwhile, in Greendale, a mysterious carnival rolls into town, bringing with it a threat to the Spellmans and the coven: A tribe of pagans looking to resurrect an ancient evil…”

It sounds like the usual for Sabrina, her friends, and her family.