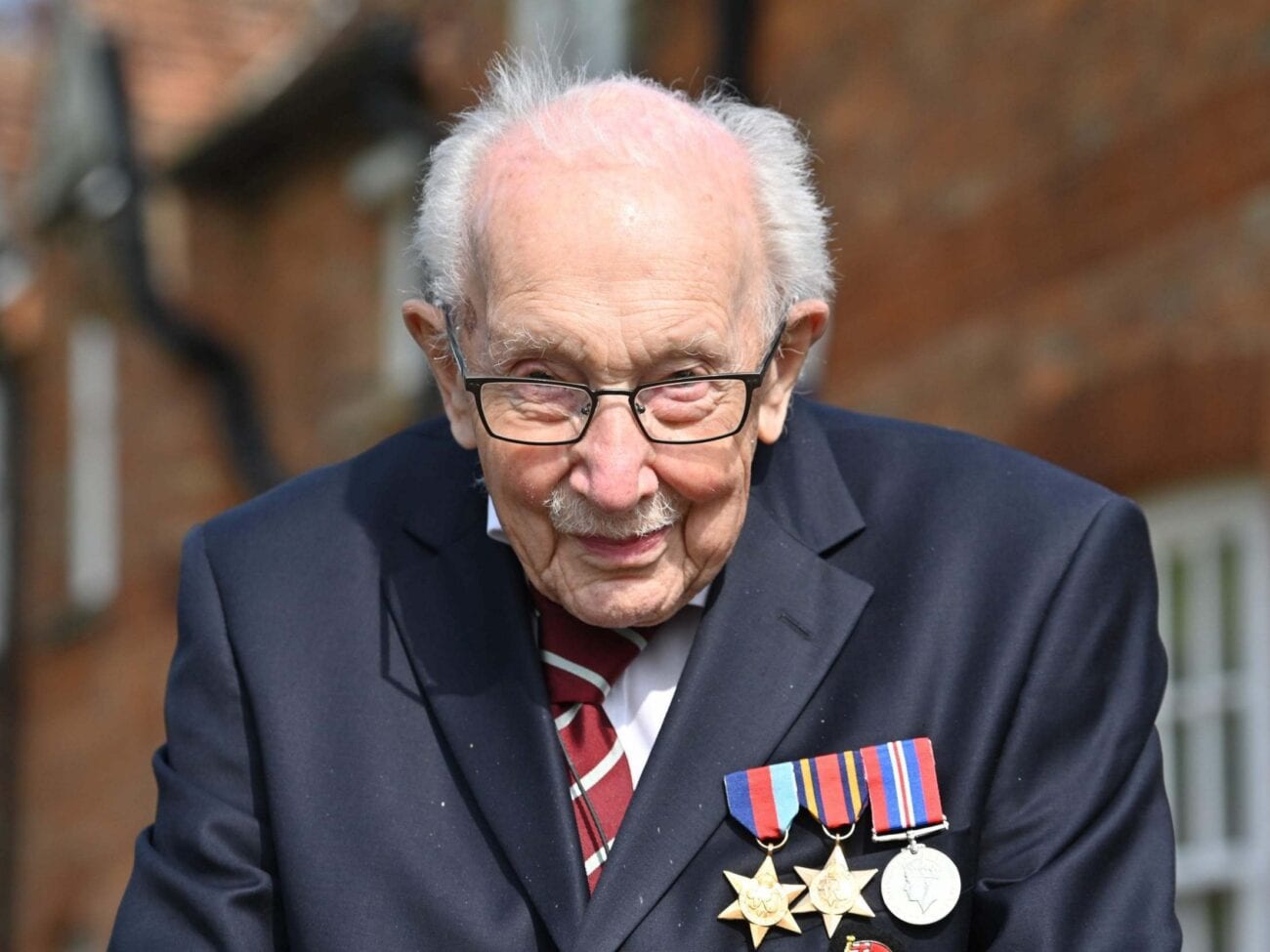 RIP Captain Tom: What is the UK doing to honor the legend?

Tom Moore, a 100-year-old Army veteran who raised $45 million for British hospitals through his charity walks, died of COVID-19 on Tuesday. Now, the UK is honoring Captain Tom in a variety of ways. See how people are paying tribute to a legend. 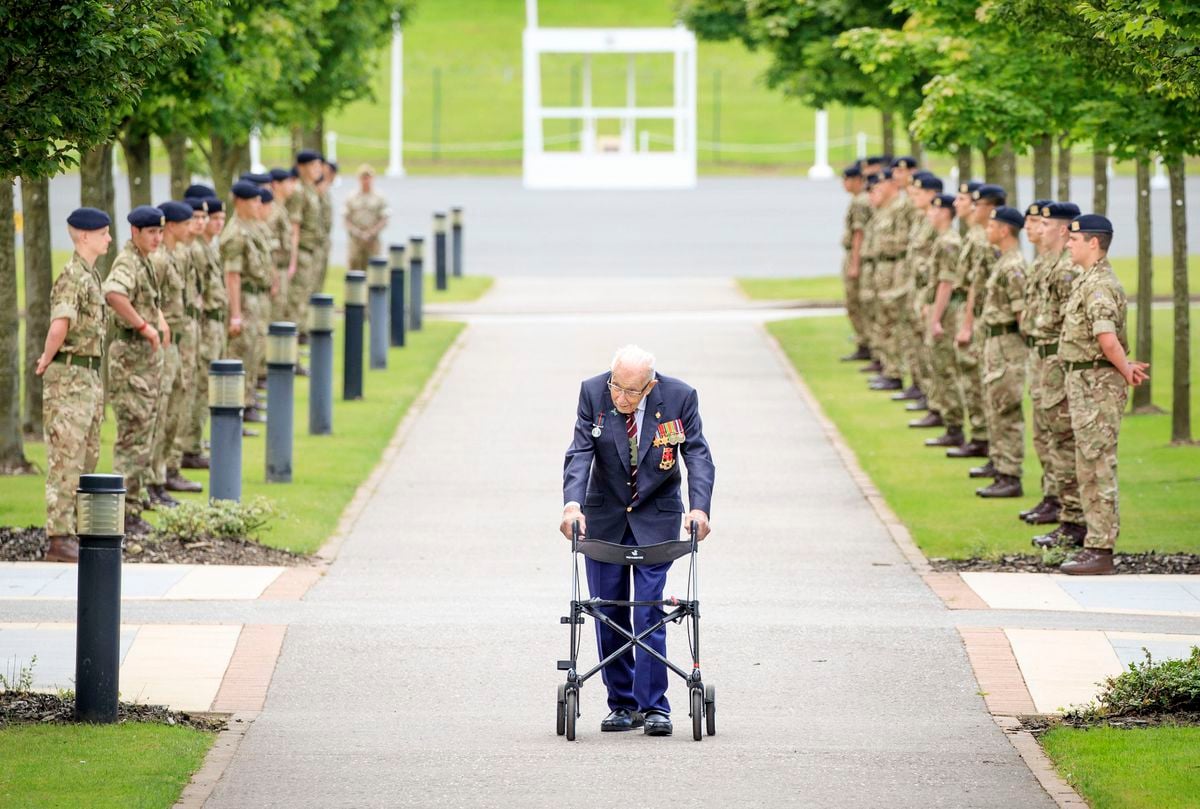 On Tuesday, Tom Moore’s Twitter account posted a photo of the veteran on one of his legendary walks and captioned it: “Captain Sir Tom Moore 1920-2021”. According to his daughter, Hannah Ingram-Moore, Captain Tom was hospitalized on January 31st for pneumonia. Shortly after, he tested positive for COVID-19. 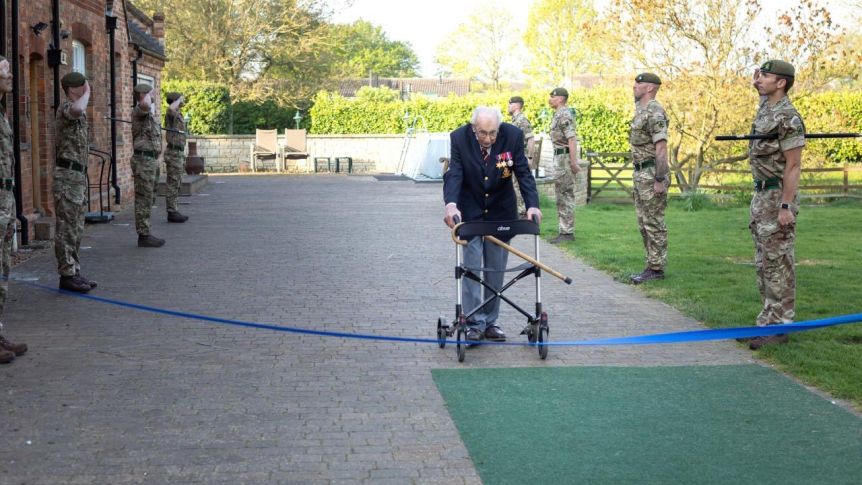 Captain Tom caught media attention when he did 100 laps around his garden in Marston Moretaine, a village just outside of London, in order to raise money for hospitals in the UK.

The challenge began when his son-in-law, Colin Ingram, agreed to pay Moore a pound per lap if he completed 100 laps prior to his birthday. His daughter suggested that the challenge be posted on an online charity platform called JustGiving, in an effort to raise £1,000 for the N.H.S., which was at the time struggling with treating COVID patients at the time.

Moore was more than up for the challenge, and ended up raising $45 million for the cause. Moore described the experience to The New York Times: “The first step was the hardest,” he explained. “After that, I got into the swing of it and kept going.” 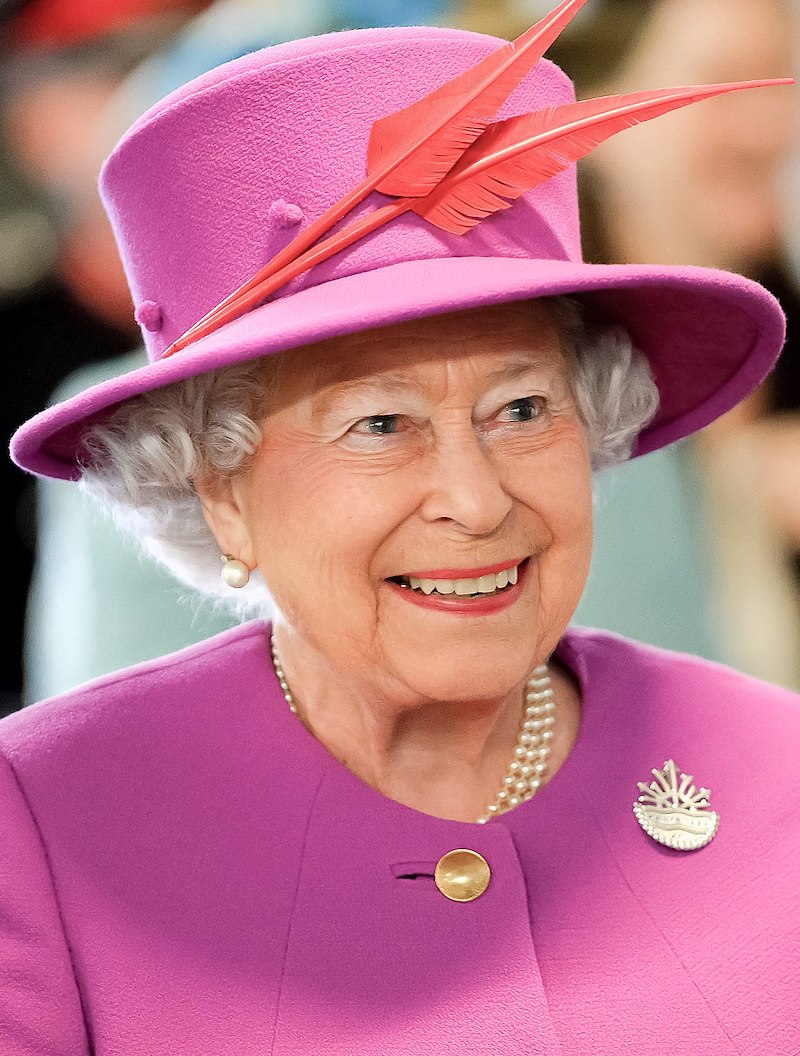 Pretty soon after he took on the walking challenge, Tom Moore became beloved by the world. His walks were shown on BBC, CNN, NBC, and Al Jazeera. He also made many appearances in British tabloids, where he was nicknamed “Captain Tom”.

Once his fame really took off, he was knighted by Queen Elizabeth II, who came out of quarantine just for the special occasion. He also earned a multi-book deal and recorded a song that hit the top of the charts. 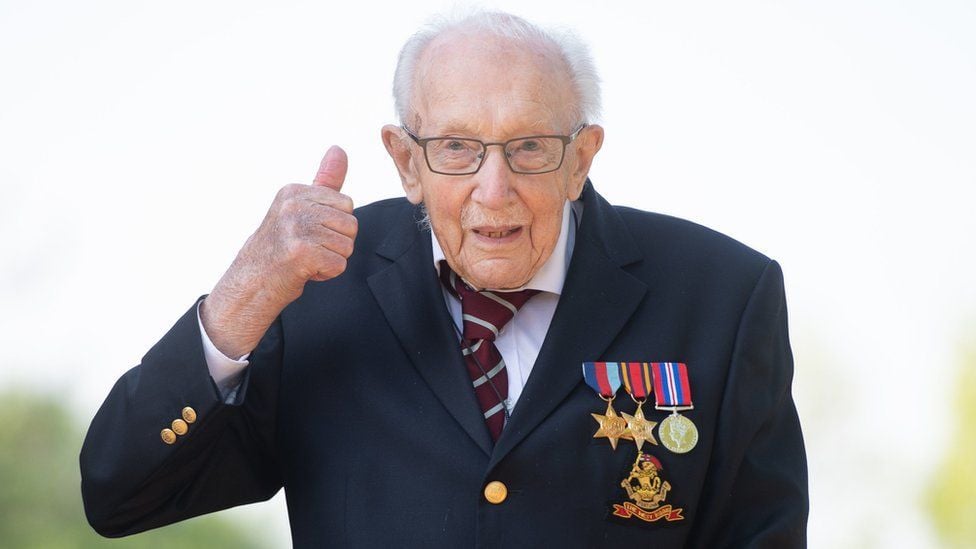 What did the money go toward?

Captain Tom admitted he had no idea he’d raise as much money as he did when he started on this journey. “Never in 100 years, when we started, did we anticipate this sum of money would be raised,” he said.

Captain Tom also mentioned that part of his motivation was recalling being supported by the Britons during the war. “At that time,” he explained, “the people my age, we were fighting on the front line and the general public was standing behind us. In this instance, the doctors and nurses and all the medical people, they’re the front line. It’s up to my generation to back them up, just as we were backed up.”

Some of the money raised by Captain Tom is going toward therapeutic facilities for health care workers to relax after the traumatic experience of treating COVID patients. His goal is to have money go to all facets of the British healthcare system. 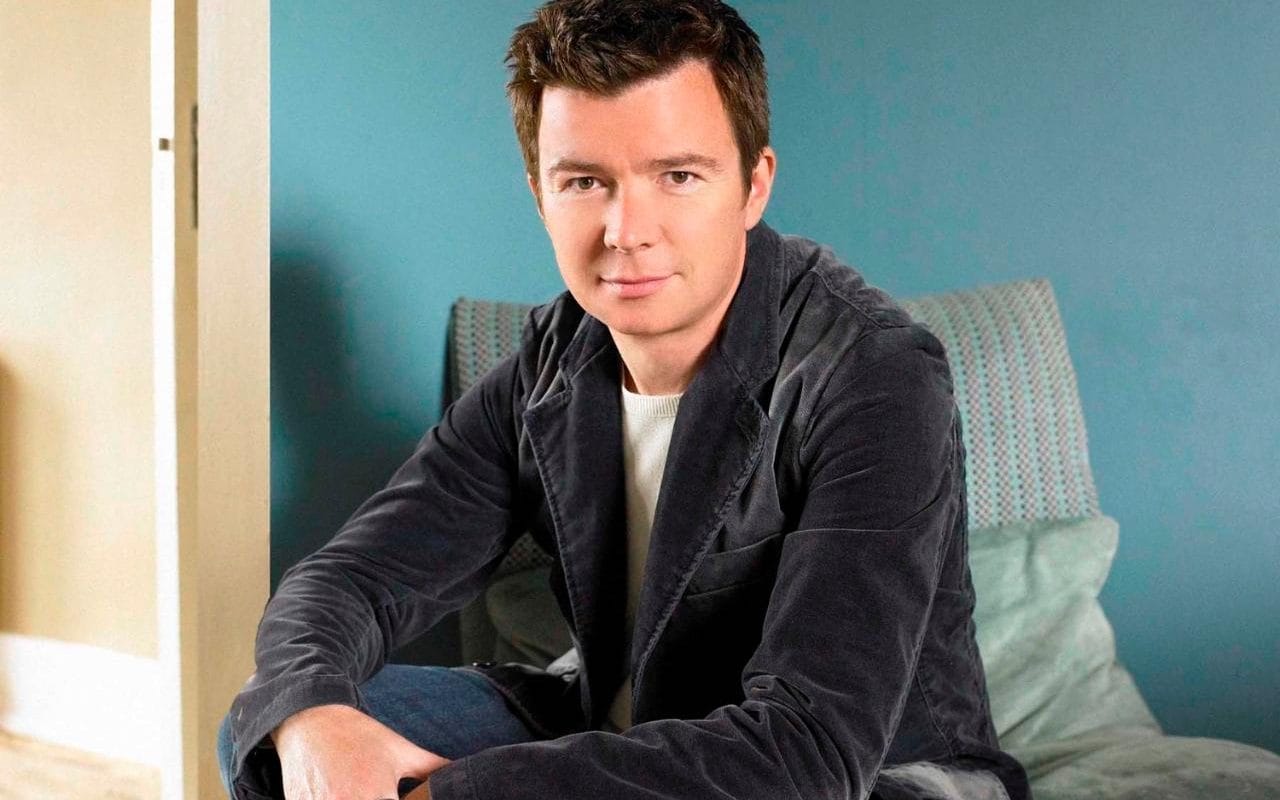 How are people paying tribute?

Britain’s Got Talent judge Amanda Holden recently set up a petition for some kind of monument to honor Captain Tom. On Change.org, she characterized Captain Tom as a “national hero who brought us all together and who shone so much light in such a dark time.”

Holden also urged people to “show generations to come what it was to be brave, courageous and spirited with a statue of Captain Sir Tom Moore outside the Houses of Parliament forever more.” The petition is addressed to Prime Minister Boris Johnson, who asked the nation to clap for Captain Tom at 6pm on Tuesday night. 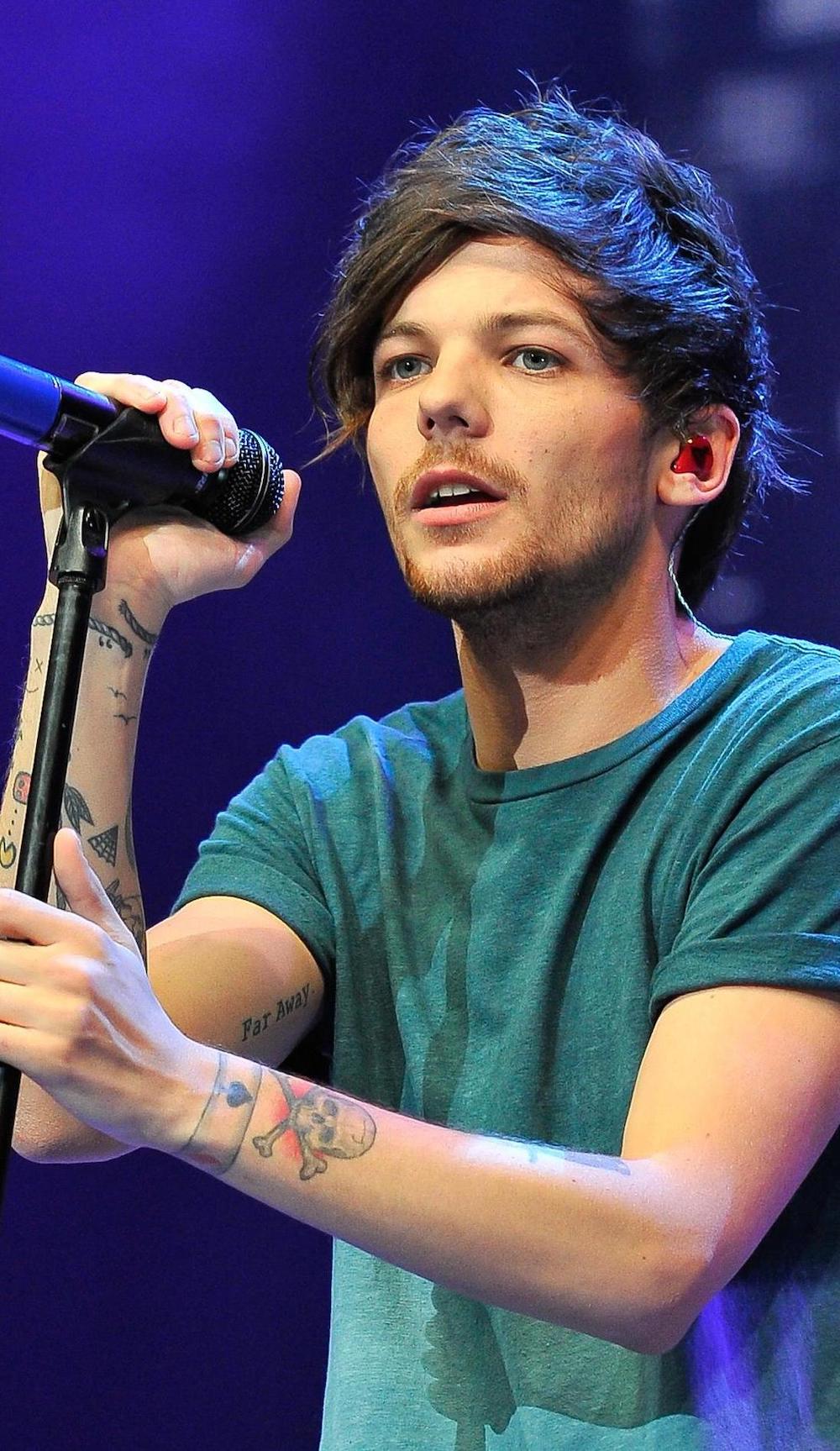 Others honored the legend in tweets. Rick Astley wrote: “Captain Tom is a hero who’s kindness, courage & sincerity united a country around him when we needed him most. Thank you Sir for all that you have done & may you RIP. I’ll be on my doorstep at 6pm to clap for Captain Tom & for the NHS whom he wonderfully supported. #CaptainTom Rx.”

One Direction’s Louis Tomlinson also paid tribute to Captain Tom, writing that he was: “A truly remarkable man who’s message lives on as inspiration for us all to do more whatever our situation.”

Some people took the opportunity to comment on the current dire political state in the UK. One Twitter user wrote: “I’m sorry that captain Tom died but I won’t be clapping for him tonight because I’m just as sorry for the 107000 who died without a voice because of an incompetent prime minister and inept government.” Another asked “Why was he not vaccinated on time?”