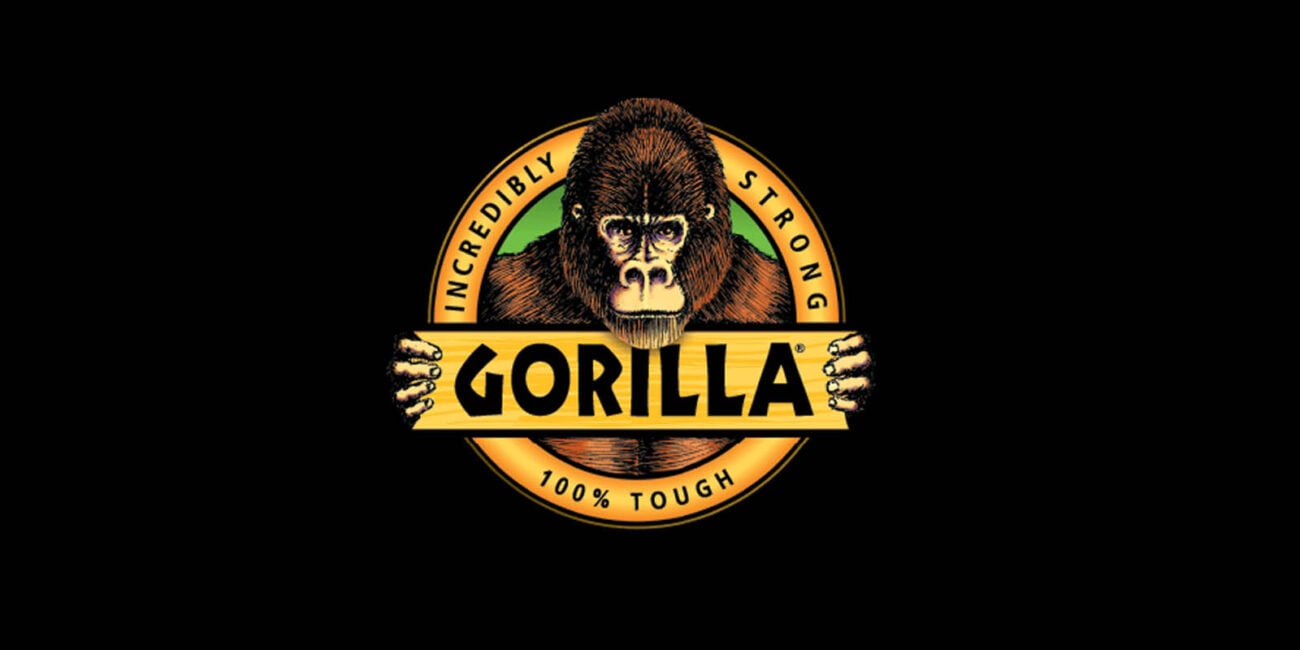 Please internet, we beg you – stop putting Gorilla Glue on your body. 😭 Gorilla Glue is an adhesive product known for being incredibly good at doing what it advertises. The glue is meant for construction materials such as wood & fabric and is recommended for home & car projects (yeah, it can glue the side mirror back onto your car) among others DIY crafts.

Gorilla Glue is not meant to be applied to the human body. In fact, the label specifically warns against swallowing it, getting it in eyes, or getting it on your skin & clothes.

However, despite all of this, two people have gone viral over the last week for doing exactly what the label warns against. The second one did it in response to the first person. Listen, this is wild, so let’s walk through the story of Gorilla Glue Girl & Boy.

Tessica Brown, a forty-year-old mother ran out of her favorite hairspray called Got to Be Glue about a month ago. In a pinch she picked up a spray can of Gorilla Glue – presumably thinking this was a very clever life hack she’d come up with. She thought she’d be able to wash it out that night.

To her surprise, the Gorilla Glue didn’t wash out that night. Or the next night . . . or the next. After about a month of having the exact same hairstyle Tessica took to TikTok in order to confess to her predicament with hope the internet could help her by providing advice. Then she went viral.

Her TikTok started making the rounds and plenty of people were providing advice on what kind of solvents she should be trying on her hair. However, a lot of other people were sharing the video in delighted horror while deeming her Gorilla Glue Girl. 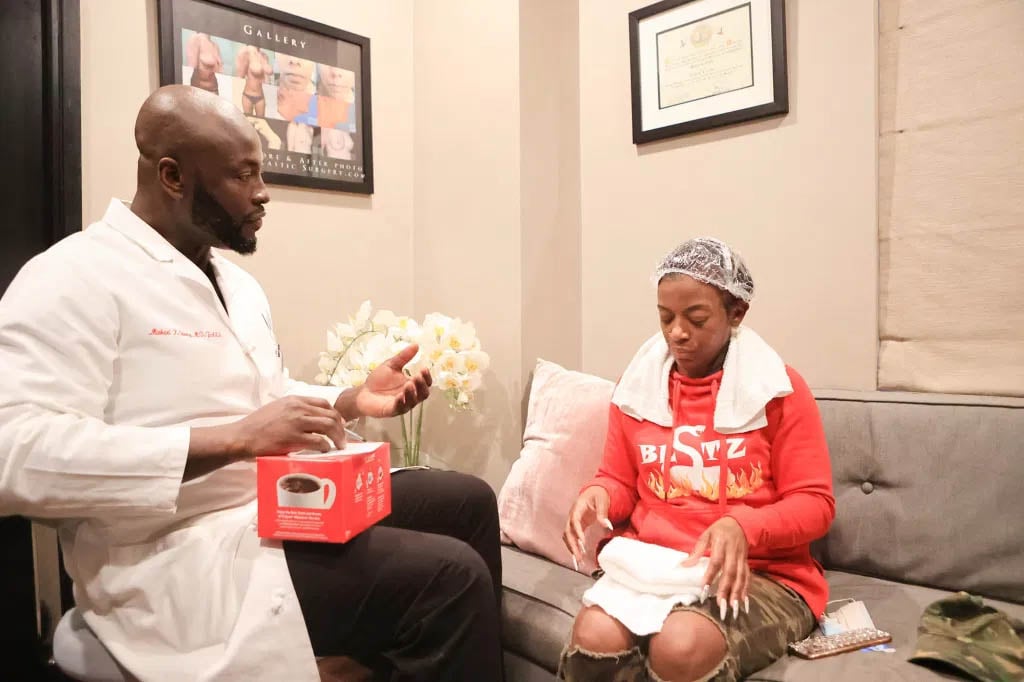 There were, of course, skeptics out there. Some people unfamiliar with the glue thought surely it couldn’t stick your hair to your scalp for a month. This led Tessica to making a second video where she washes her hair on camera, and sure enough the hair didn’t budge even the slightest bit. Most people were satisfied she really had glued her hair.

Other naysayers were convinced she had committed the act of gluing her hair specifically to go viral – that she had somehow intended to become Gorilla Glue Girl. In interviews Tessica has said this is not the case – she really thought she’d be able to wash the glue out.

Tessica Brown’s story recently came to an end when she went to a plastic surgeon who offered to help her for free. The doctor sedated Tessica for what would be a four hour procedure using various solvents and oils. By the end of the ordeal Tessica still had a full head of hair and she was finally able to run her hands through it again. 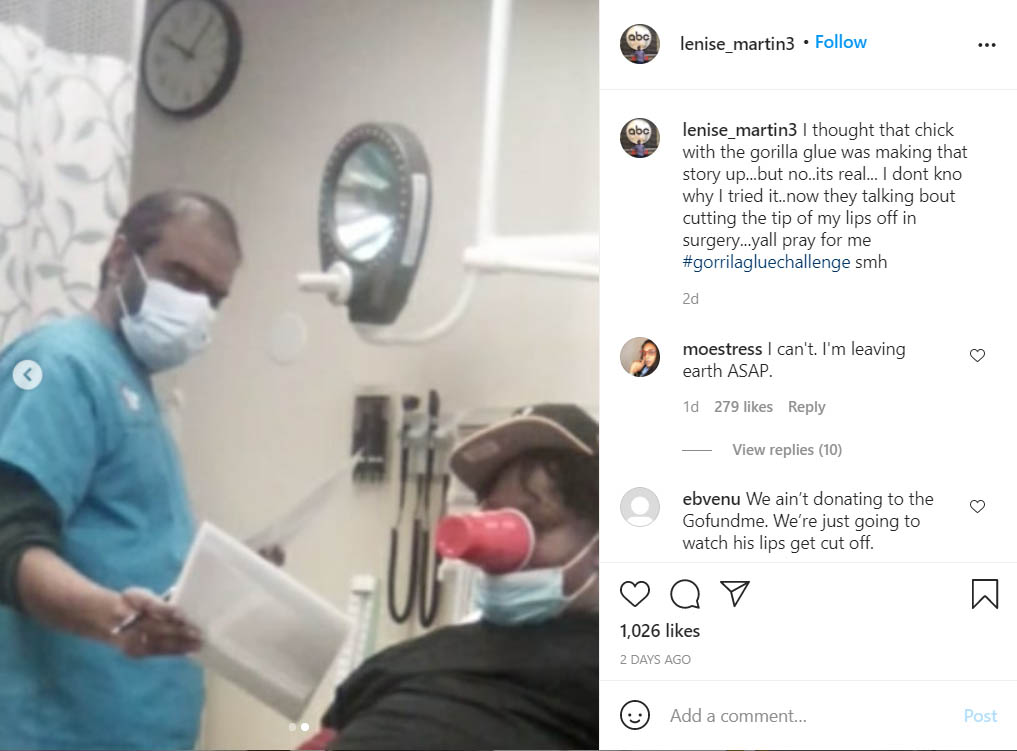 One internet user apparently found none of the above information convincing and felt so confident that Tessica Brown had made up the whole Gorilla Glue Girl incident that he decided to “prove” her wrong. Oh no.

Instagram user @lenise_martin3 decided that he was going to make a video where he would use Gorilla Glue to adhere a red plastic cup to his face and then lick it off in order to prove how weak the glue is. Why glue it to his face you ask? We wish we knew.

The video ends with the cup being applied over his mouth. The next image on his post is of the man being looked at by a doctor in the ER. His Instagram caption claims the doctors were considering cutting the tips of his lips off. It’s being reported that the doctor was able to “painfully” peel the cup off of Gorilla Glue Boy’s face – presumably without any lip removal.