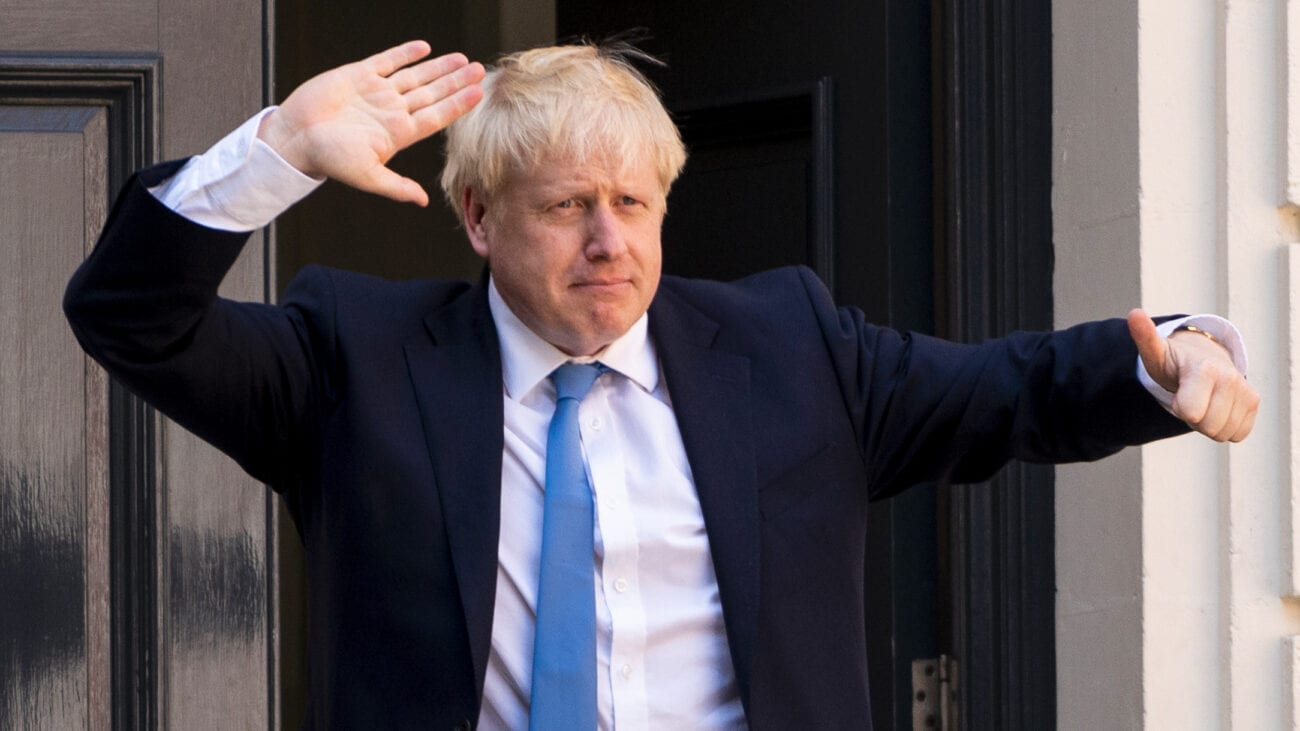 2020 will go down in history as the messiest year. Each country suffered whether it was fires or the never-ending COVID-19 restrictions. The UK continues to be given new laws and lockdown rules based on the number of coronavirus cases rising. Prime Minister Boris Johnson has made headlines for all the wrong reasons this year.

There are many memes describing how BoJo’s crazy methods to curb COVID is just that – crazy. Here’s the UK’s reaction to the Christmas restrictions and how Prime Minister Boris Johnson has been named a grinch. 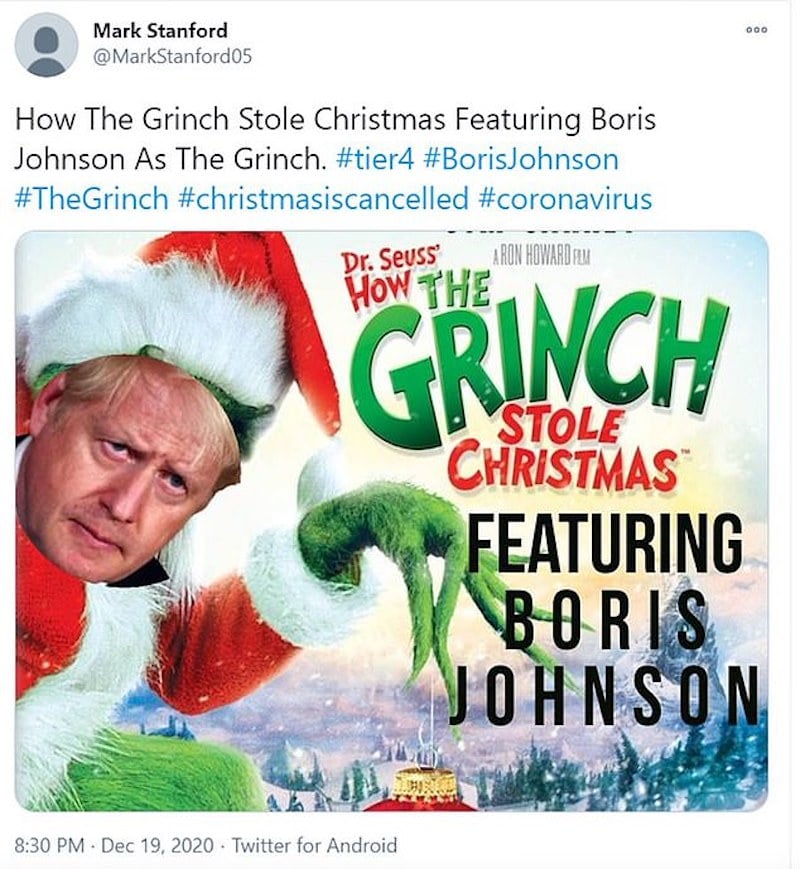 Sometimes you look back at the past few months and question your entire existence. Prime Minister Boris Johnson has recently announced London and more southern areas are going into a new tier – tier 4. Many UK citizens have cast him in the role of the Grinch. Honestly? We don’t blame them. 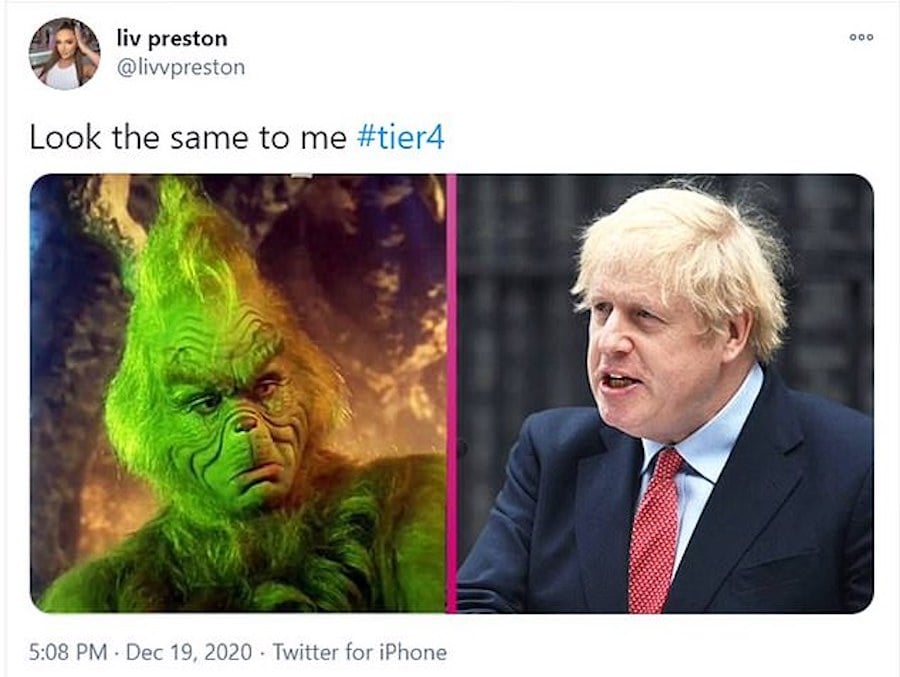 Ever seen the Grinch and Boris Johnson in the same room? We thought not. The resemblance is uncanny and his Christmas lockdown rules make us believe they could be the same person.

says it all really. pic.twitter.com/RYvKVoP4kR

We don’t know about you, but this is officially not making sense. Teachers are struggling to comprehend why they can’t see their family yet they’re able to mix with their students and parents? Calling Mr. Johnson, what is going on?

I have no idea who made this but it made me laugh 😂 #tier4 pic.twitter.com/dlXvuLeg2J

What are you going to do now? Send a SWAT team? Looks like BoJo is getting tougher with those never-ending lockdown rules. It’s beginning to look a lot like Christmas . . . not!

A running joke in England is the northern and southern territories have a definite divide cutting through the midlands. Tier 4 has officially been introduced to London and other southern counties. Northerners are definitely enjoying the divide now more than ever. This Inbetweeners quote perfectly sums it up.

When you have had an early night in London, missed boris news conference and left for work in the morning. #tier4 #coronavirusuk #newvariant #BorisCancelsChristmas pic.twitter.com/66iqECmrfx

Not the toilet paper!

Just because a new lockdown in place doesn’t mean you have to buy ALL the toilet paper. Get your shopping in quick everyone, before Karen fills her house with pasta.

This sign will make all the difference #tier4 pic.twitter.com/4vkkMtQCEF

Everyone is fleeing from London, but at least this sign is here. The UK is in shambles, however, this sign has provided a sense of calm . . . it wishes us all well, at least.

At what number of tiers will the government stop you ask?#tier4 pic.twitter.com/xuJ1BngHfl

It’s nearly the New Year and the Prime Minister isn’t slowing down the tier lockdowns. Even Christmas hasn’t softened the Grinch’s heart.

Our only option? RUN!

Santa Claus looks different this year? The UK Prime Minister has officially become the Grinch and he’s here to say . . . Christmas is canceled for everyone in tier 4! Bah humbug to you too BoJo.

What do you think of the latest COVID-19 restrictions? Does the tier system make sense to you? Let us know in the comments.