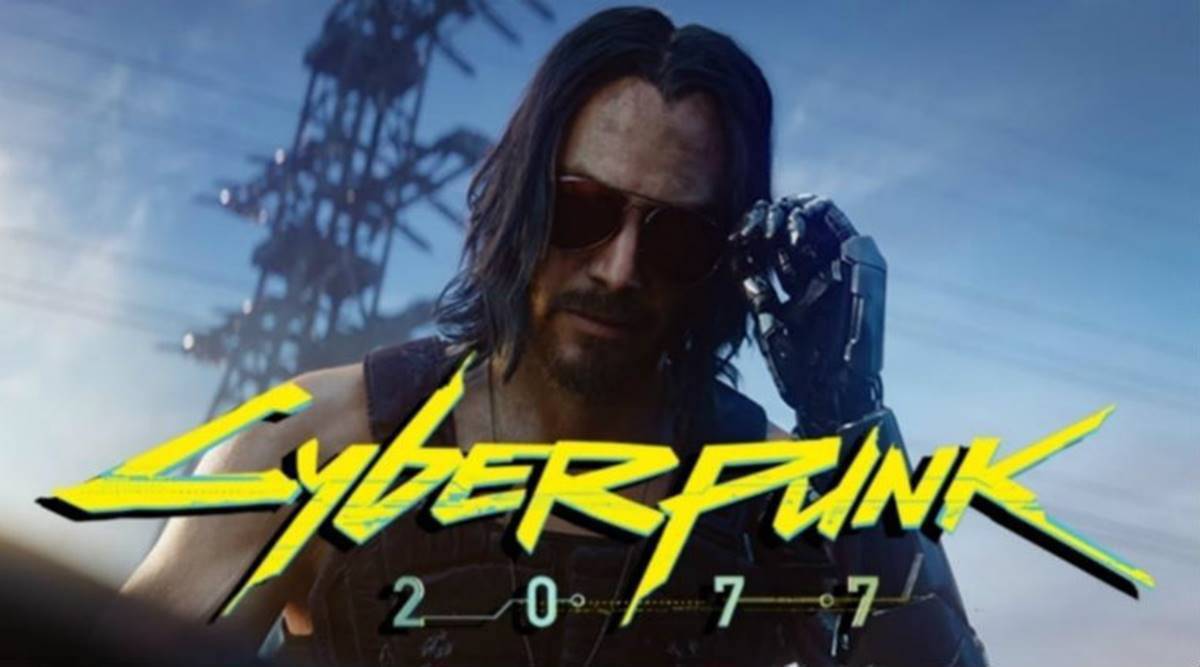 Why we stan Keanu Reeves: Here are his very best cyberpunk memes

Every now & then, something breaks the internet. If we’re lucky, it’s awesome news like Keanu Reeves playing one of the main characters in Cyberpunk 2077 – a reveal made by Microsoft all the way back in June 2019. We’ve been feeling the announcement’s ripples for months now, and the Keanu hype has grown stronger now that Cyberpunk 2077 has been released.

Keanu Reeves is already a pop culture icon. He’s traveled back & forth in time as Ted Logan, battled the rise of evil artificial intelligence as Neo, and assassinated a gazillion contract killers as John Wick. Reeves’s participation in Cyberpunk 2077 is one more notch on a belt of pure badassness and the internet has the memes to celebrate.

The most recent Cyberpunk 2077 TV commercial has become the source of popular meme edits all over. A few well-placed cuts here & there and Keanu Reeves looks as though he’s very serious about what it takes to get laid in the world of Cyberpunk 2077. Considering what we’ve heard about customizable genitals in the game, the re-edited commercial may be closer to the truth than you think.

When adventurous criminals from 2077 meet health-related restrictions from 2020, the results may not be pretty. Keanu Reeves’s Johnny Silverhand suddenly becomes a representation of everyone who’s been quarantining for months on end in this meme. 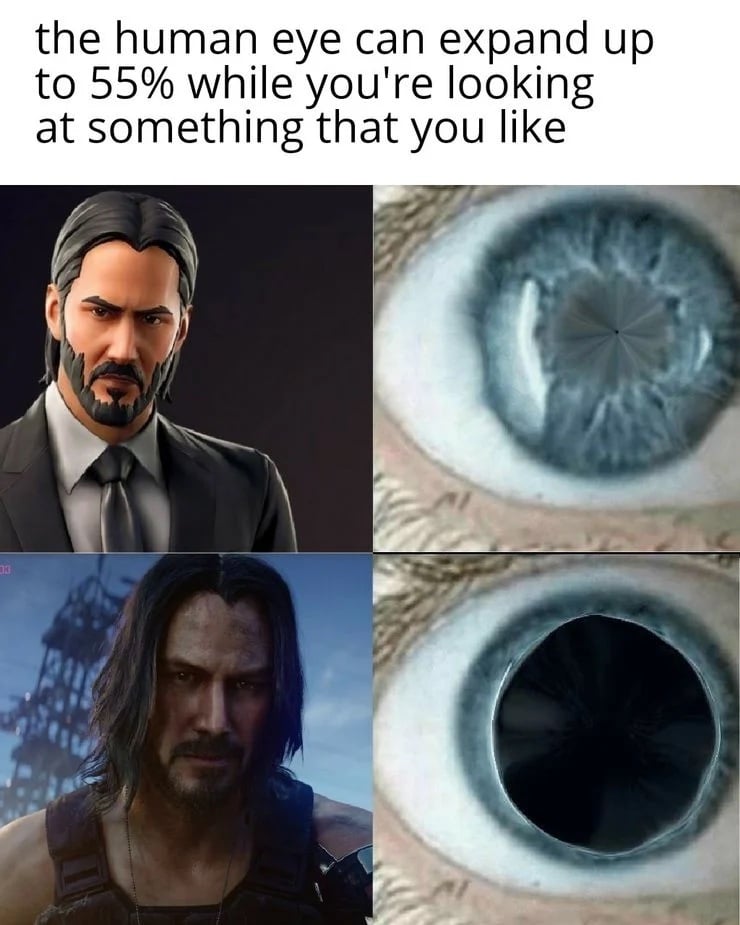 Cyberpunk 2077 is not Keanu Reeves’s first videogame appearance. Epic Games offered a special John Wick skin on Fortnite and it looked . . . fine. It just pales in comparison to Johnny Silverhand’s Keanu-ness, as this meme shows.

2020 has been quite the year and would likely sound a little bananas to someone from the future. Good thing you can count on Cyberpunk 2077 Keanu Reeves to take it all in stride and tell you to get over it in this meme. 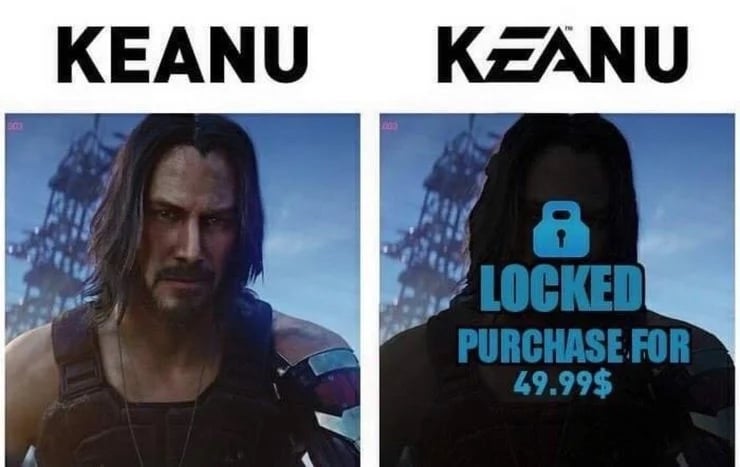 Thankfully,  CD Projekt doesn’t charge extra for having Keanu Reeves as part of your Cyberpunk 2077 experience. As this meme points out, however, there’s probably a parallel universe where other game developers like EA would squeeze you dry for the privilege of enjoying his likeness through your entire gameplay.

I don't know if I should cry in angst or laugh

As we mentioned earlier, internet-breaking is a thing. This meme highlights the so far unmentioned link between Keanu Reeves & John C. Reilly’s animated alter ego. Do we have to play Cyberpunk 2077 to find out who’s the equivalent to Princess Vanellope von Schweetz? 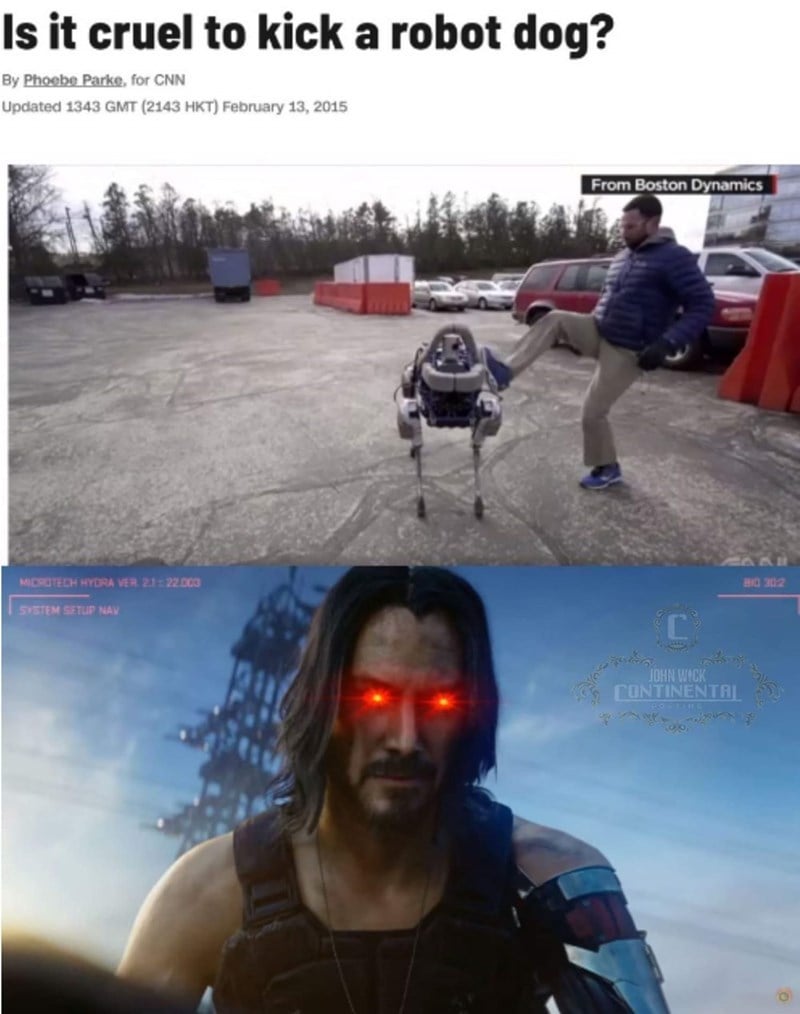 The John Wick franchise turned Keanu Reeves into an icon for dog lovers everywhere. Does this mean every future Keanu character inherits his affinity for pups? This meme posits even mechanical dogs can breathe easy, knowing someone like Johnny Silverhand is on their side. 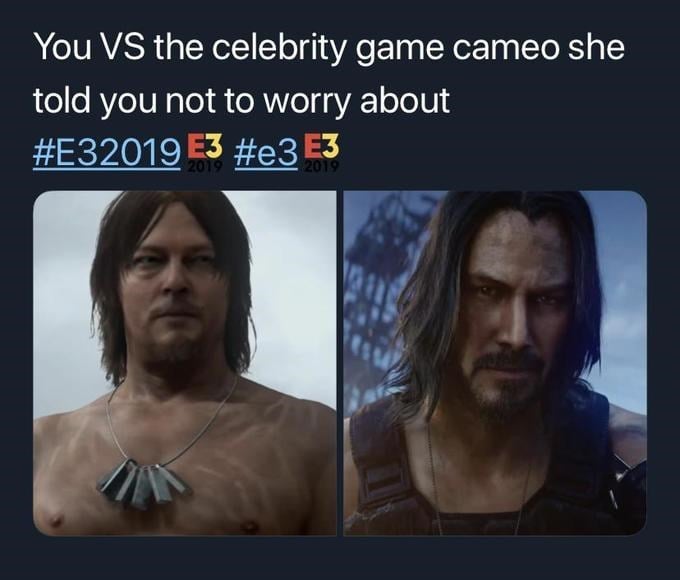 While The Walking Dead franchise is still going strong, and Norman Reedus remains an internet darling, their popularity is clearly dwarfed by the worldwide adoration for Keanu Reeves. Comparing Reedus’s appearance in Kojima Productions’ Death Stranding to Keanu’s Cyberpunk 2077 role is a little cruel, but this meme goes there. 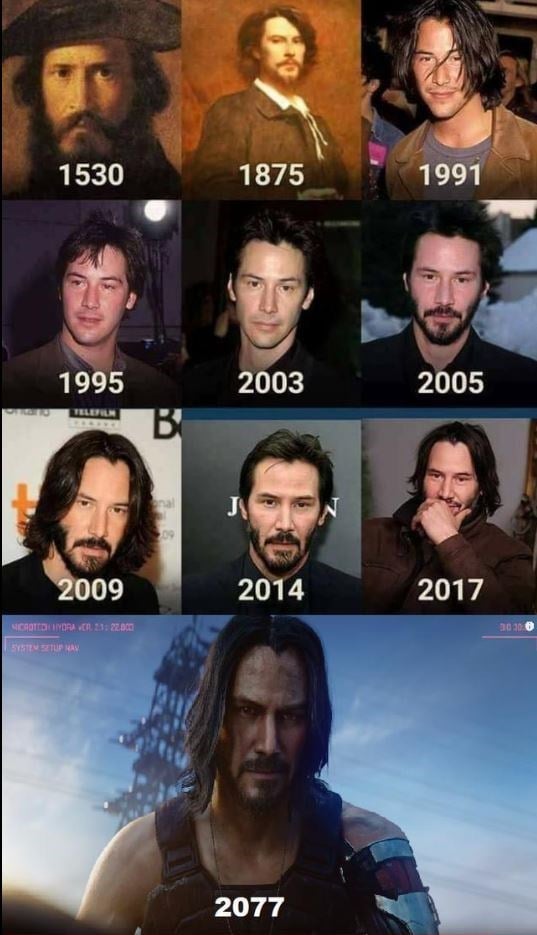 Whatever skincare treatment Keanu Reeves is into, we want it and we want it now. Perhaps eternal youth is simply an added bonus when you’re this awesome, but you can’t deny watching Keanu’s looks remain basically the same as years go by is a little trippy. This meme simply takes that idea to its logical conclusion.

Reports have been going back & forth about whether Keanu Reeves’s Johnny Silverhand is a “romanceable” character in Cyberpunk 2077. This meme strikes at the core of what any gamer who’s ever fantasized about sex with Keanu Reeves is currently thinking.