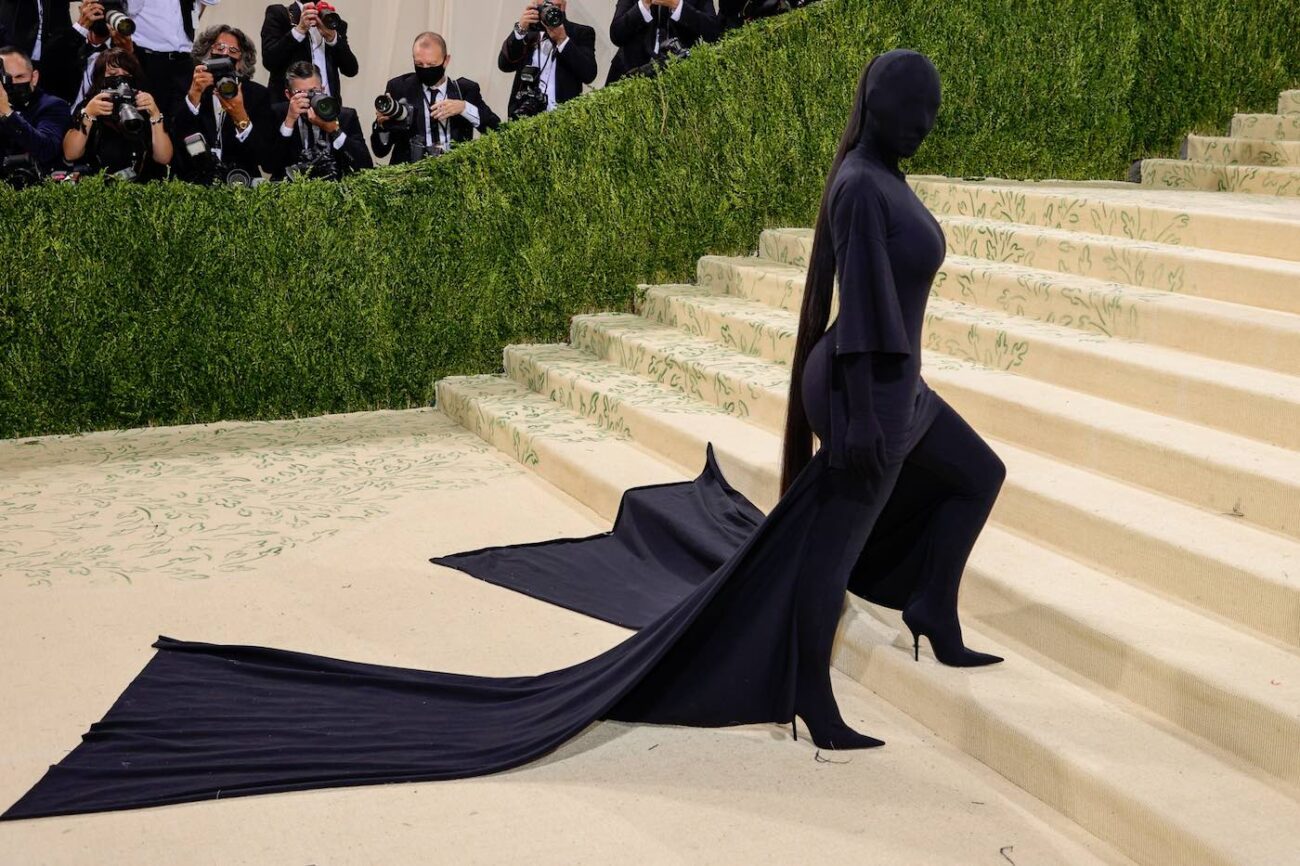 Oh look at that, it’s Kim o’ clock already! Yes, the Kardashian Jenner alarm has gone off, and it’s time for us to chat about the latest exploits of the American royal family. The Met Gala popped off on Monday, and droves of fans took to their devices to peek at the hottest outfits from the world’s most fashionable millionaires. Kim Kardashian, of course, was one of the most highly anticipated guests.

Kim showed up wearing one of the most talked about pieces from the Gala, surprising no one. However, the piece she chose to wear certainly raised eyebrows, and is one of the strangest things we’ve seen the socialite wear (and we’ve seen her wear quite a lot). If you weren’t sure if Kim’s fit was dripping or not, do what we do – let Twitter decide.

Haters & fans alike took to Twitter to express their feelings about Kim Kardashian and her bonkers ensemble. But was the dress so crazy, it just may have worked? See what we’ve found below.

why ? What is the purpose ? 😳#MetGala #MetGala2021 #KimKardashian pic.twitter.com/YnyhhGhKA1

When folks saw Kim Kardashian in black quite literally from head to toe, many had questions. This user keeps things simple: what is the purpose?

That time the Kim Kardashian Met Gala #MetGala. have come in #KimKardashian pic.twitter.com/rGBYxIpxGg

Others had more specific questions on Twitter. Was Kim trying to channel xenomorphs with her new fit?

KIM what is this. 😭 #MetGala2021 #KimKardashian pic.twitter.com/agY7SXsqHT

You don’t get more straight forward than this. What is this, Ms. Kardashian?

what was the theme this year? Celebration of Taliban takeover? #KimKardashian #MetGala #MetGala2021 @KimKardashian pic.twitter.com/05UOPsKVVQ

Others took to Twitter to question whether Kim Kardashian was making a political statement with her Met Gala dress. This user wondered if Kim had a theme in mind.

Honestly think it's a bit crass to wear this at at time when women in Afghanistan are forced to cover their faces & bodies & stay at home… #KimKardashian #MetGala pic.twitter.com/NgCbNep96P

Then, some people wondered if Kim was even aware of the statement she might be making covering her face & body in full black garb. It’s hard to say.

Okay, who forgot to unlock Kim Kardashian as a usable player before the Met Gala? #MetGala #KimKardashian pic.twitter.com/zWhnsObD9o

The hive mind of the internet was buzzing with one idea after Kim Kardashian dropped her new fit at the Met Gala. Was Kim going for the “unlocked player” look?

you haven’t unlocked this character yet #MetGala #KimKardashian pic.twitter.com/3MblocNrBW

The unusable player bit worked even more when Kim stood next to more, well, visible outfits on the red carpet.

Kim has never failed to give us meme material#MetGala #KimKardashian pic.twitter.com/ojLuphfvhr

Speaking of more revealing outfits, people used Kim’s sister Kendall to help size up the strange black outfit at the Gala. This user thinks compared to other fits, Kim’s look is downright depressing.

mom: “why don’t you ever play with the kid next door”

Was Kim going for the “kid next door” look? Because to many, no one wanted to play.

This proves that Kim and Kanye are back together because…🥴 #MetGala #MetGala #KimKardashian pic.twitter.com/kWUDLpoKeJ

Some fans couldn’t help but notice that Kim’s look mirrored Kanye’s during his Donda events. Does her dress mean the two are back together? Some think, “hell yes”.

Me and my sense of humour #MetGala #KimKardashian #MetGala2021 pic.twitter.com/wtKQm74Dn0

Many speculated if the masked individual taking pics alongside Kim Kardashian was none other than her ex-beau. Others, however, just used the opportunity to make jokes like this.

Finally, some didn’t think one way or another about Kim’s dress. They thought she was wearing the piece for just one reason . . .

What did you think of Kim Kardashian’s Met Gala drip? Sound off in the comments below!