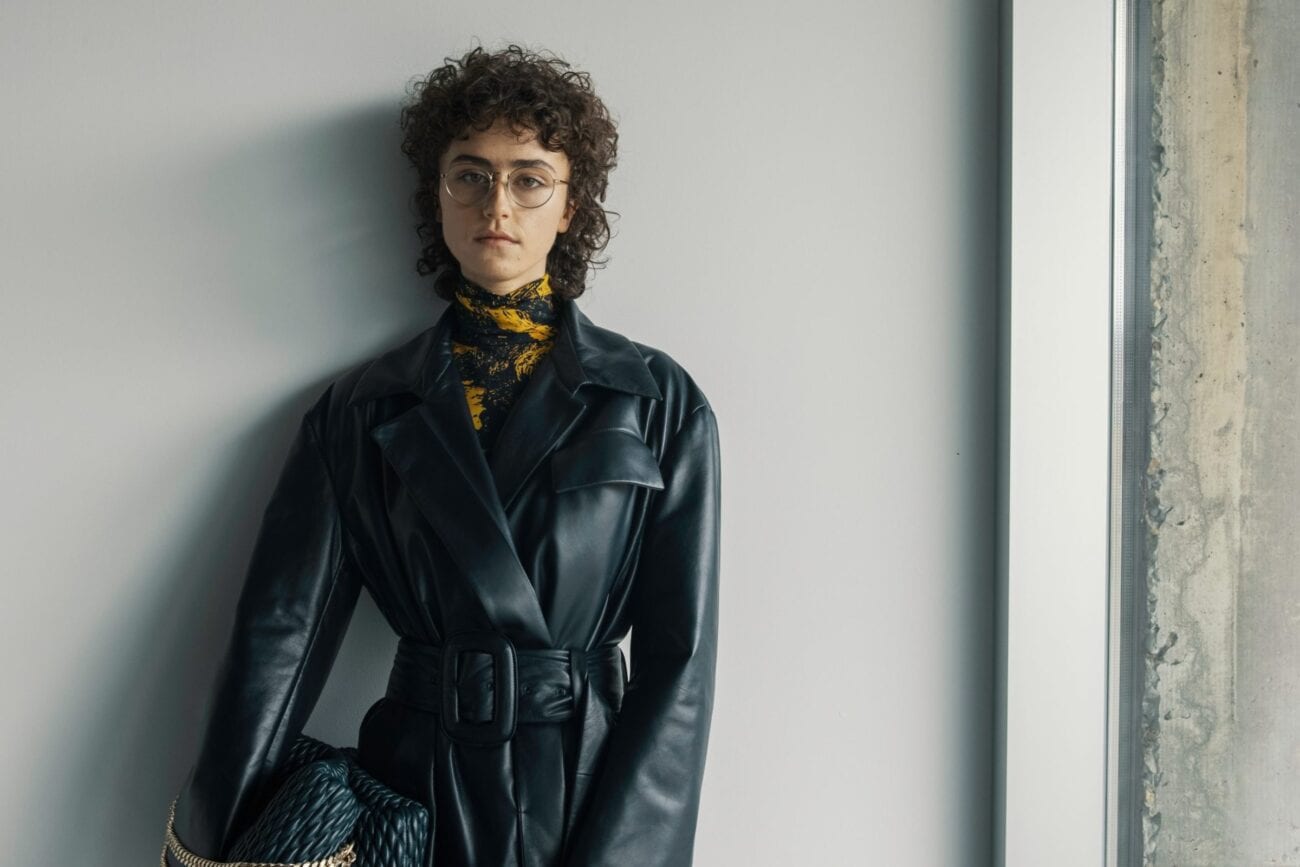 An impressive family indeed, Ella Emhoff is the daughter of Kamala Harris’ husband, Doug Emhoff. Doug Emhoff is a lawyer and the first second gentleman of the United States. Also, Ella’s brother, Cole Emhoff, is an executive assistant for Plan B Entertainment. Let’s take a look at Ella Emhoff’s budding fashion career & her trending catwalk for Balenciaga! 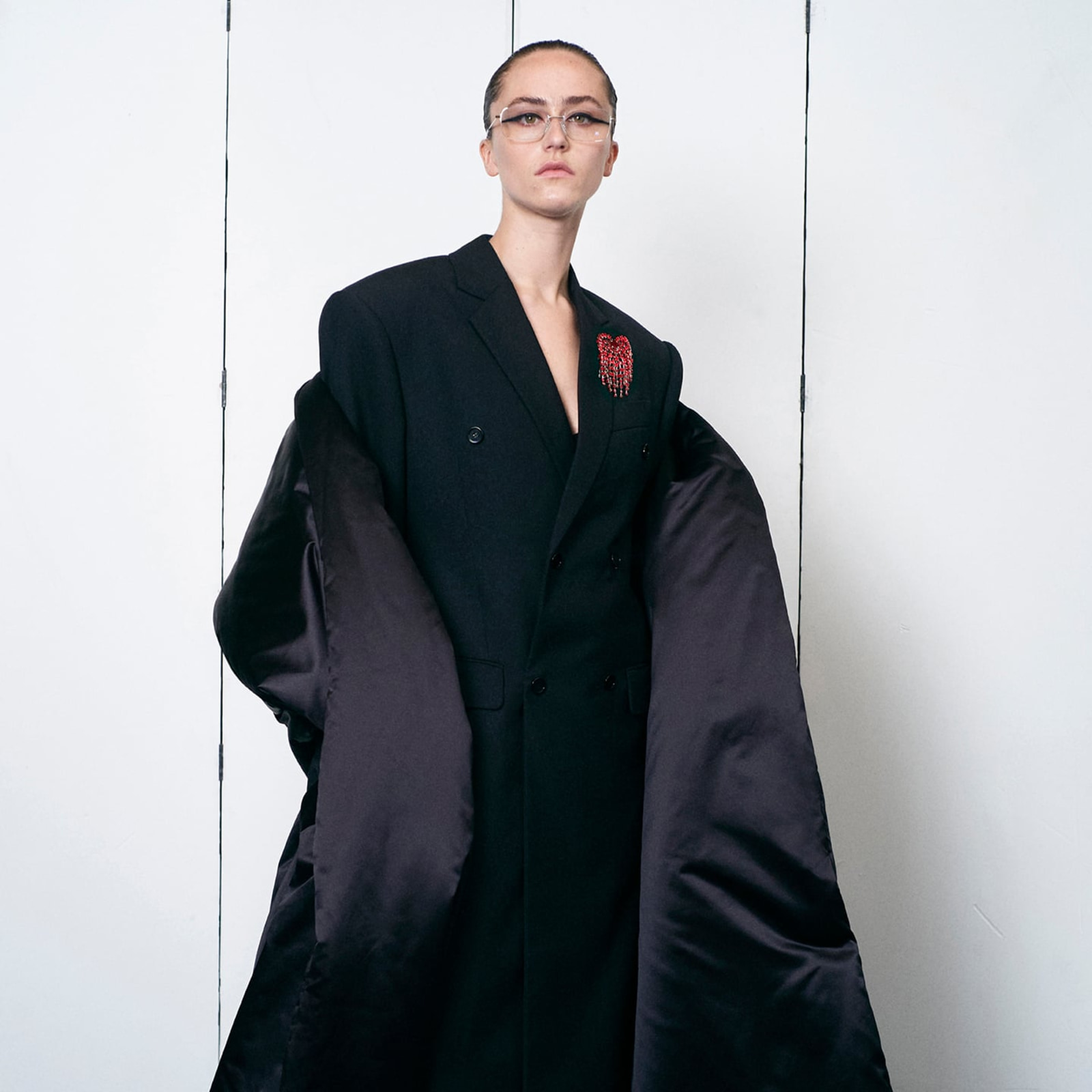 Kamala Harris’ stepdaughter looked suave & modern in an all-black ensemble. Emhoff wore a broad-shouldered, long blazer with an oversized satin shawl. The Balenciaga fit was topped off with pointed boots, clear-framed glasses, and a gelled back bun. Ella Emhoff was definitely giving us luxurious yet confident vibes.

Her work on Balenciaga’s runway marks her debut at Paris Fashion Week. Emhoff had to flex on fans as she posted on Instagram photos & a video of her trending catwalk. She captioned the post, “balenciaga couture thank you/congrats to @demnagvasalia and the whole balenciaga team. truly amazing </3” 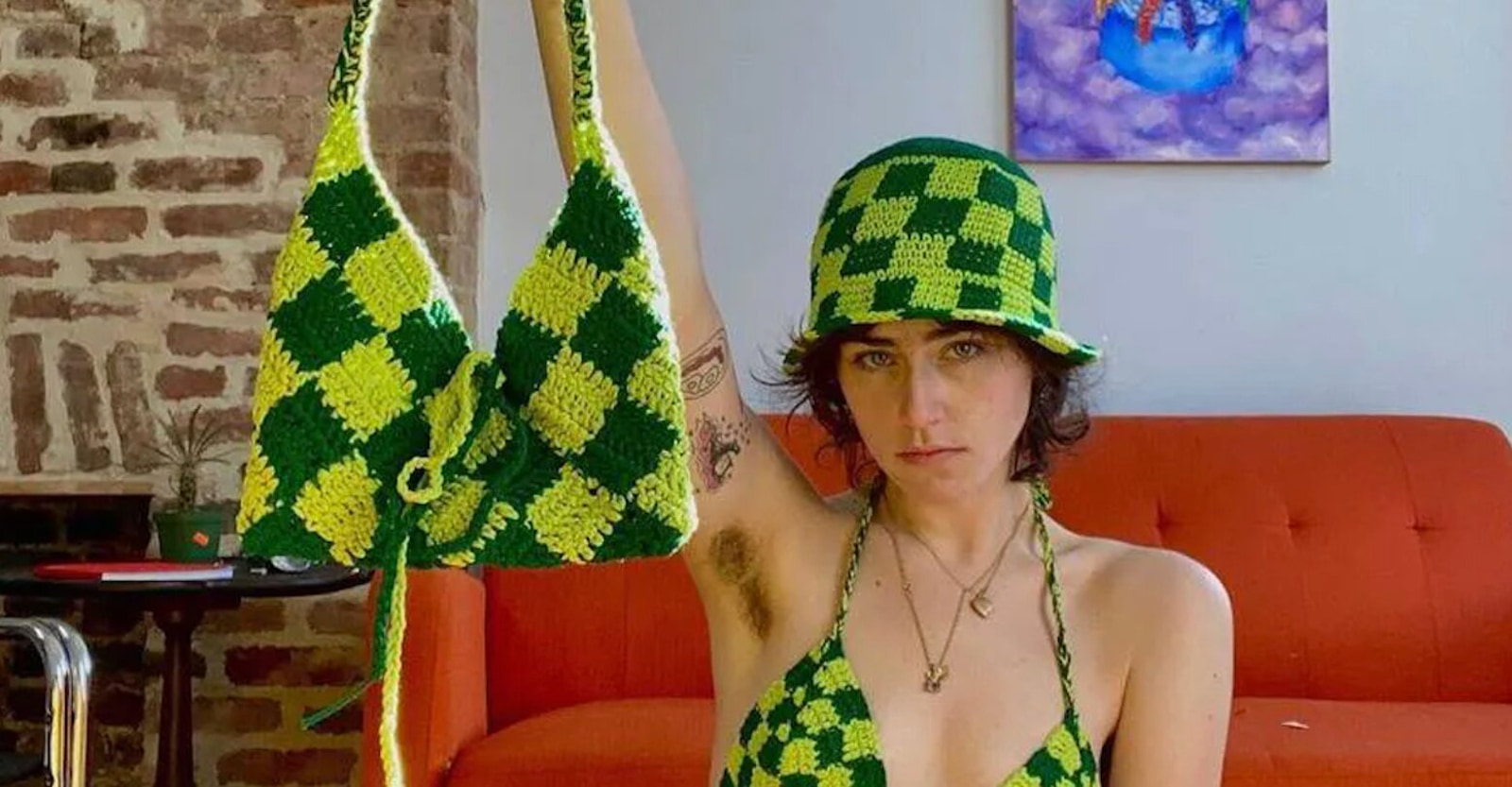 Ella Emhoff was first noticed for her chic fashion taste when she made her appearance at Kamala Harris’ inauguration in January. Not long after, Emhoff was signed with IMG Models.

The following month, Emhoff successfully landed both a magazine cover shoot and a runway debut at New York Fashion Week. She was featured on the cover of DUST, a cutting-edge European fashion magazine. In the cover photo, Ella Emhoff is wearing a knit sweater that she designed herself. 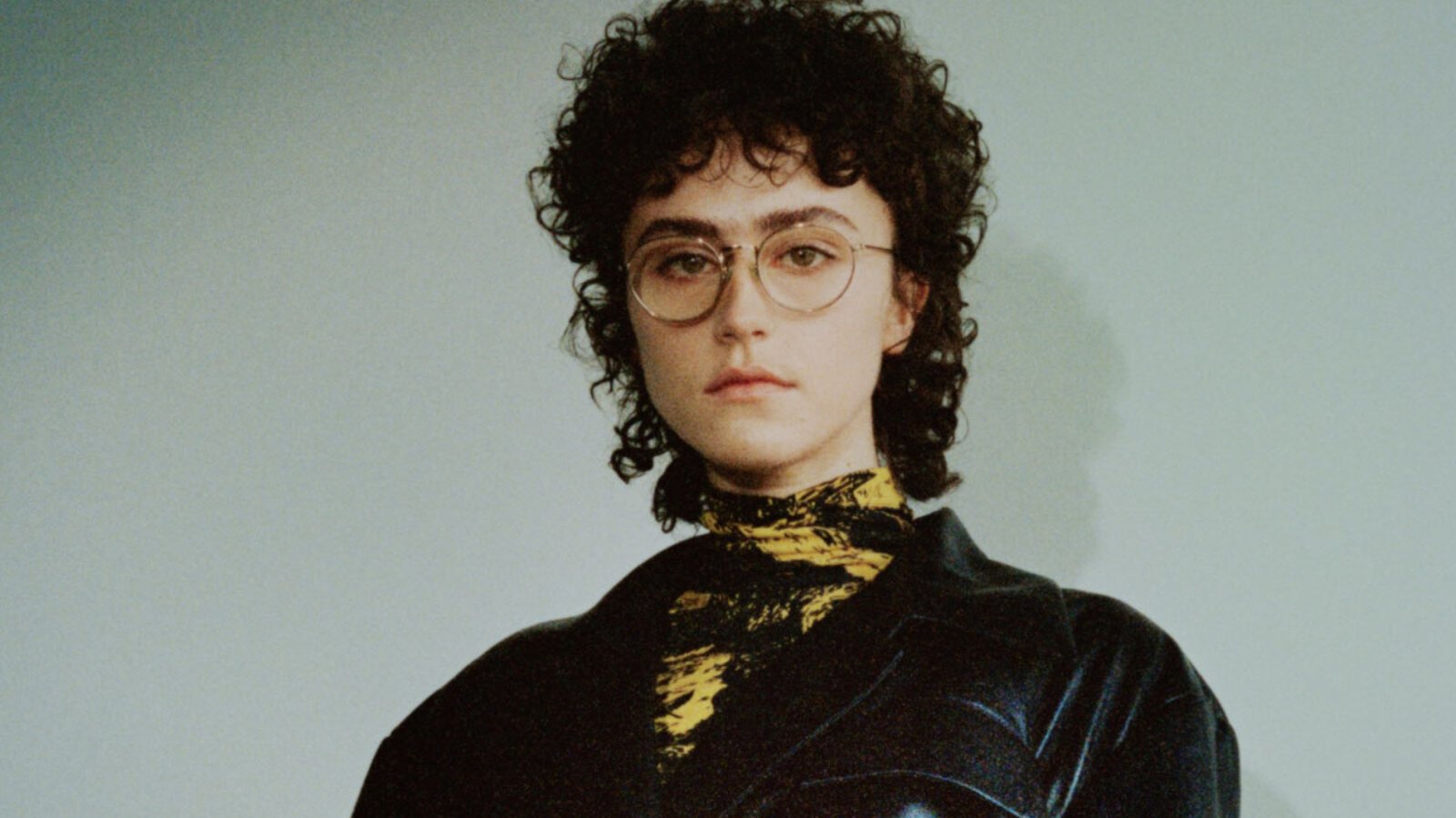 On February 18th, she made her runway debut with Proenza Schouler’s new collection which premiered at New York Fashion Week. The new model wore plenty of coats & pantsuits as the designers knew she donned them well at the inauguration for Kamala Harris.

Designers Lazaro Hernandez & Jack McCollough both commented on how Emhoff got major attention from fashion designers when she appeared in her unique Miu Miu coat at the inauguration. The coat’s studded shoulders & prominent schoolgirl white collar had everyone talking about Emhoff’s contemporary fashion sense. 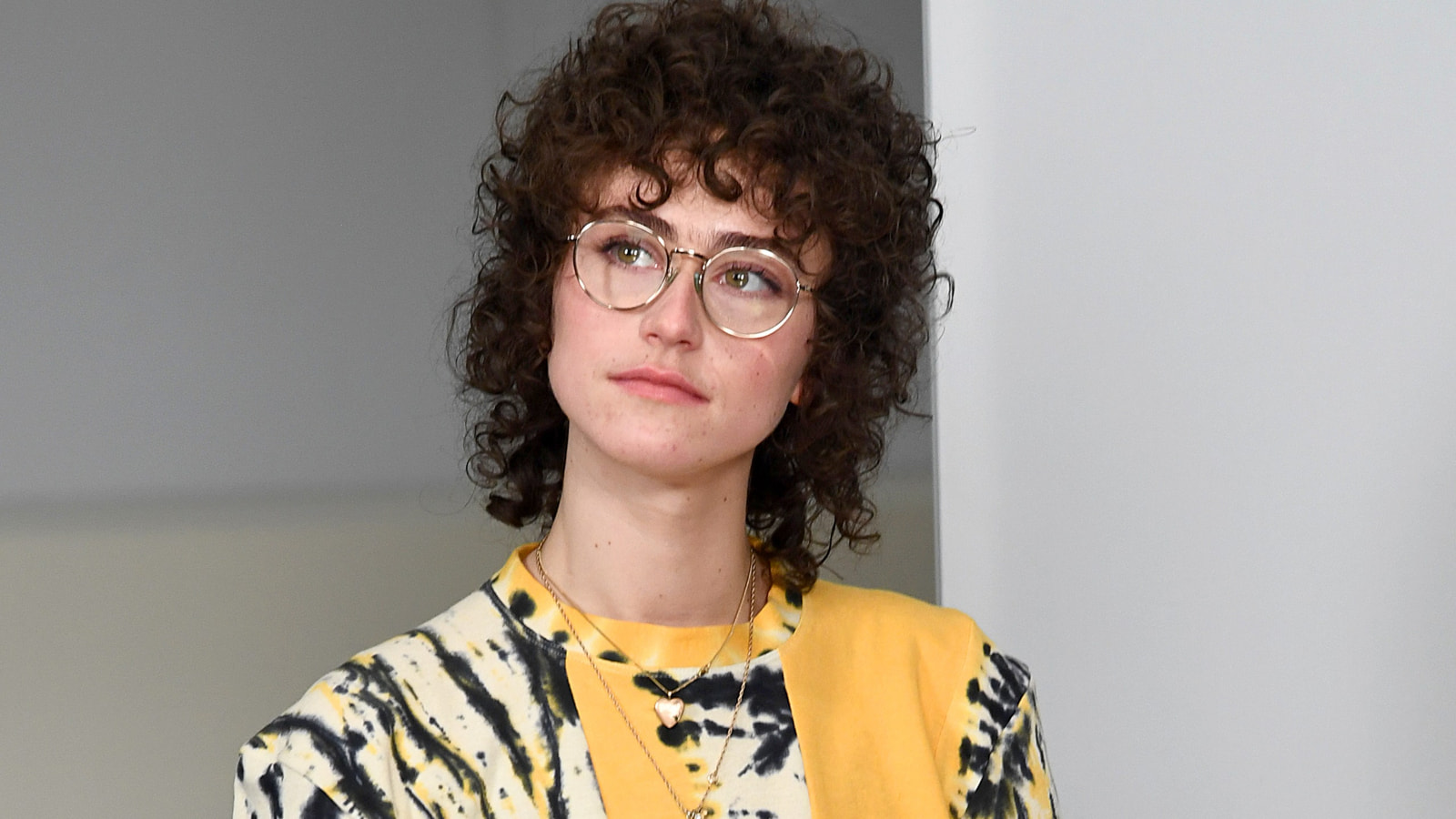 “I have to say I was a little nervous,” Emhoff said in a live-streamed conversation with the designers. It was her first runway experience and it took place outdoors at the Parrish Museum in Watermill, New York.

Designer Lazaro Hernandez detailed, “We very much believe this moment is about the elimination of anything superfluous, the elimination of excess. Just reducing things to their most essential basic forms. All the buttons are invisible buttons. The pockets are just internal.” 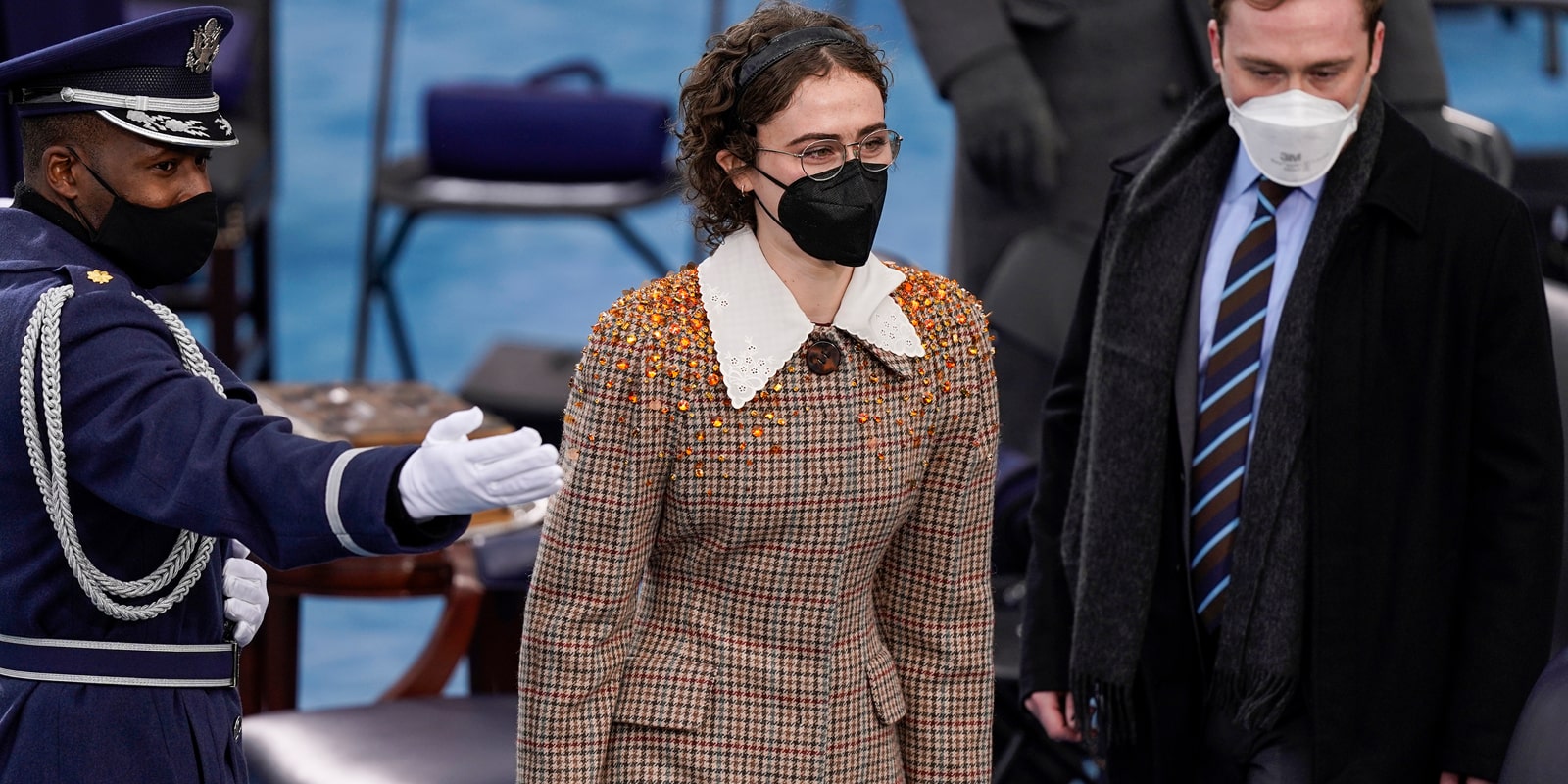 This return to basics reflects the fashion world’s sense of being “superfluous” in the middle of a worldwide pandemic. Yet the designers revealed that they believe Ella Emhoff represents a new era of modern fashion in an evolving world.

Hernandez said he believes that Emhoff is representing “this idea of a new beginning, a whole new chapter in American life, in American culture.” He continued, “She’s a nice sort of ambassador of the new moment you know, via the filter of fashion and art and craft and the world that we all inhabit. She’s sort of the ambassador of that.”

Despite her lack of experience, fans can’t get enough of her stellar runway presence. Budding knitwear designer & top model, we can’t wait to see what luxury designers Ella Emhoff will be working with next! From Proenza Schouler to Balenciaga, who’s next? Are you feeling jealous of the Harris/Emhoff family? Do you wish you were part of the talented family? Let us know in the comments below!