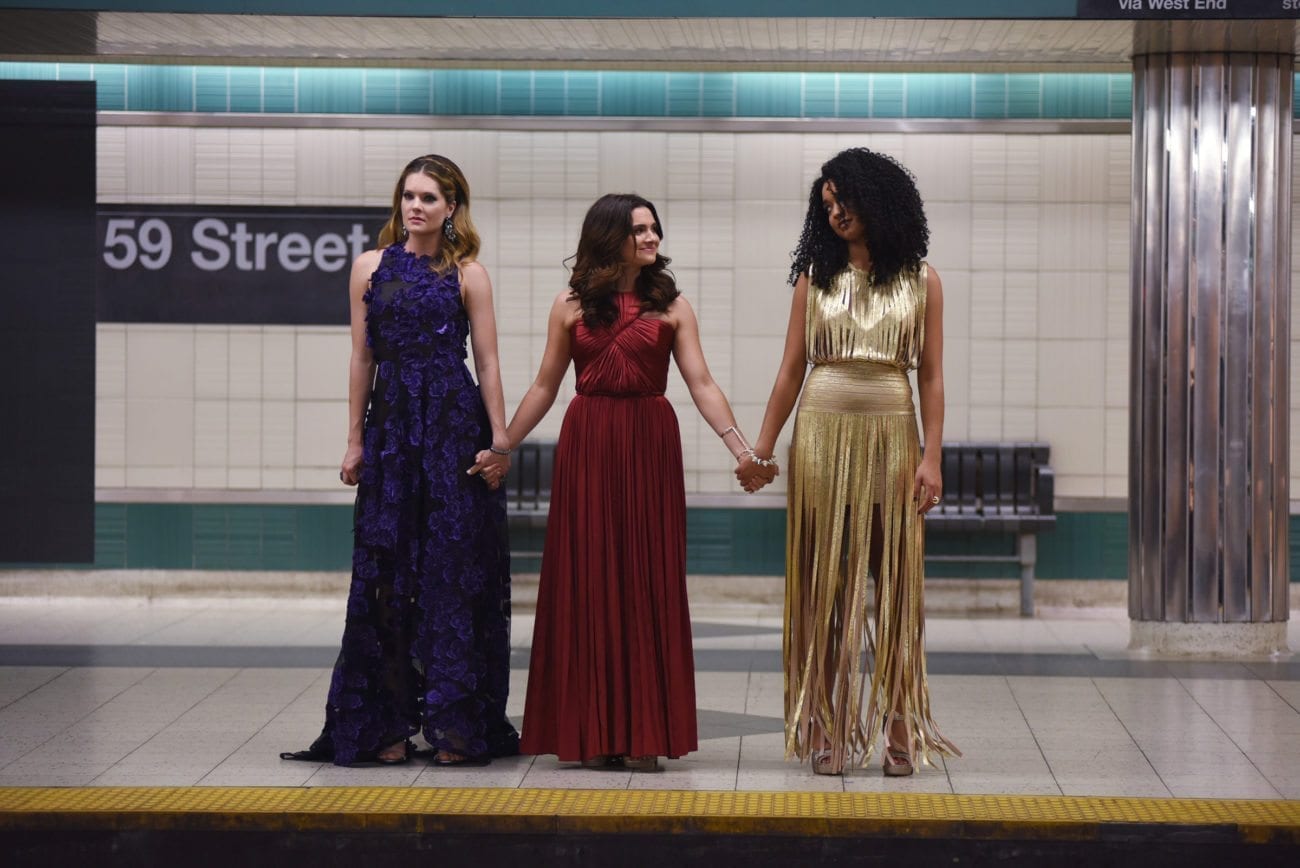 ‘The Bold Type’ has more issues than ‘Cosmo’

A long time ago in a cubicle far, far away I worked at a fashion magazine. “Worked” implies I got paid – I didn’t. I toiled like Cinderella for “expenses”, which in the naughty noughties meant endless party invitations & limousines. Book launches, movie premieres, openings of envelopes – I attended them all, swapping bumps and spit with the bright young things of the day, many of whom have gone on to great things.

At night the city was ours, but by day the fashion trenches were highly competitive. We interns were deeply involved in a war of attrition over who could work the longest hours, wear the most fabulous outfits, and of course be thinnest. Choosing a career in fashion is a lot like following your joy to become a duck on Echo Park lake. The top of the water looks tranquil, but underneath you’re paddling like mad. Dive under the surface of any fashion business and find overworked assistants whose day-to-day is peppered with drama, disorder, dependencies, and backstabbing.

The Bold Type is Freeform’s newest original series targeted towards the yillenial (14- to 35-year-old) demographic. Previously titled the punchier “Issues”, the show was changed at the 11th-hour to the more “positive” phrase The Bold Type. The dramedy was given the coveted summer slot previously inhabited by smashes such as Glee, The OC and Sex and the City.

Sadly, no new-age intention-setting or prime-time slots can save this abomination of a show – it’s fundamentally flawed from the get-go. How do I know? Because, for a short while, I lived the life of Jane, Kat, and Sutton, the central characters of The Bold Type.

The narrative is inspired by the life of legendary Hearst Media Chief Content Officer and Cosmopolitan ex-Editor-in-Chief Joanna Coles. The Bold Type follows the three gutsy BFF’s as they navigate a career in the fashionably feminist magazine Scarlet. In real life, Joanna Coles is a 50-something success story who has enjoyed an illustrious and bad-ass career as a writer, editor, and exec.

The Bold Type is set in 2017 Manhattan, focusing on the glitzy, glamorous life of fashion periodical workers. This concept alone is egregious; by setting the action in the modern day, Freeform, a TV channel owned by The Walt Disney Company, asks the audience to suspend their disbelief before they even click play.

Print media has been a pretty depressing industry for the past decade. Young women would rather get their fashion news from women they relate to, turning to internet bloggers & influencers in droves. There are no real “jobs” for writers at today’s publications, the majority of them being freelance contributors – and fashion journalists that do have jobs get paid a pittance. Offices have been downsized, with many staff members “working from home”, while money for flashy issue-launch galas is a distant memory.

The Bold Type’s presented ideals are prehistoric. The protagonists work hard to get a job for life with benefits, promotions, limited earning potential, and start & finish times. But, according to a report published by Spera in 2016, over ⅓ of millennials work in the gig economy, with 33% seeing flexible working patterns in their long-term working futures. Ambitious Millennials and young persons don’t want an office job with a fixed income; they want equity, flexibility, and skin in the game. The paradigm on display in The Bold Type died years ago.

Scarlet magazine, as presented here, is therefore hard to swallow. Why didn’t Freeform set the action in the 90s heyday of print media or, if insisting upon a contemporary setting, focus the narrative on a dotcom publication? The Bold Type inhabits a utopian 2017 that simply doesn’t exist – one where assistants can use expense accounts to chase down a (boring) story, where magazines still operate at a profit, and where Yillenials can afford (and would be caught dead wearing) Louboutins.

Speaking of shoes, one would expect a dramedy about fashion to be at least a little fashionable. Looking back at other fashion-forward shows such as Absolutely Fabulous, Sex and the City, Gossip Girl, The Carrie Diaries and Lipstick Jungle, we remember scenes where the clothes chewed the scenery – quite rightly so. For a show to be adopted by the fashion set, it must be bold and frivolous, celebrating fashion for fashion’s sake. No one wants to watch dowdy dressers in their down time. Where’s the escapism in that?

Sadly, the executives behind The Bold Type missed that incredibly important memo. Not only is the costume department lacking any Patricia Field (Sex and the City) or Mona May (Clueless) to provide flashes & sashes of genius, it’s also entirely missing any fashionable, age-appropriate looks. We estimate the wardrobe department of The Bold Type is exclusively staffed by over-40s. For a youth-oriented show about a fashion bible, the outfits are embarrassingly unfashionable. Where are the Fenty X Puma fur slides? Where are the Raf Simons Calvin Klein underwear-as-outerwear trend? Where are chokers? BDSM-inspired leather pants? Chunky heels? Where-oh-where is style at all? This is a huge miss for a show targeting the trend-driven youth of the day.

In fashion-oriented TV, costumes should embody their own narrative, and The Bold Type entirely misses this opportunity. Pretty Little Liars, Freeform’s recently wrapped yillenial favorite, used contemporary costumes as a way to convey character, narrative, and motivation. The youth favorite Riverdale recently played with the rich history of the Archie comics canon, bringing vintage styles into the now, tongue firmly in cheek. The only narrative we see from The Bold Type costumes is a wardrobe department stuck in a rut for at least the past 15 years.

Another massive issue in The Bold Type is the flippant, throwaway feminism running as a theme throughout. Scarlet magazine is feminist in the same way Katy Perry is feminist. There’s a lot of talk about feminism, but utterly without activism. The pilot sets the tone-deaf standard, as we see Kat display stunningly craven inactivism in choosing what’s best for the magazine (and presumably the male shareholders we see in an early scene) over the safety of a female friend.

Use of the word “feminism” in the shooting script is so continous it’s jarring, reminding us of Dear White People, which utilized the word “woke” in dialog with similar frequency – with one important difference. Dear White People purposefully overused “woke” as a subversion tactic; the satire wanted to start conversations about “wokeness”, about equality and social signalling. By the end of Dear White People’s first season, we were left questioning the lifespan of a buzzword after it’s been adopted, overused, and then appropriated by the very people against whom it was used.

The adoption of the word “feminism” by the bigwigs working for The Mouse is nothing more than cringeworthy virtue signal. It’s your teen brother smoking pot and telling you, “Look, i’m cool too.” It’s your sad Dad rapping along with Kanye. It’s the executives at Pepsi saying, “I know what will sell us more drinks . . . .” The Bold Type uses this culturally loaded word, “feminism”, without a scrap of intention behind it. The story shows no desire to change anything, and there is no context for the term’s inclusion ad nauseum. The characters may as well be saying the phrase “hot air”. For a show based on the life of an inspirational female business leader, Freeform’s embarrassing play at wokeness is a great disappointment.

There are so many TV shows that deal with modernity well. Pretty Little Liars, though soapy, revealed the secret lives of teenagers. Riverdale took an old-fashioned source, the Archie universe, and brought it up to date, subverting costumes, technology, and tropes. Transparent talks about prejudices and diversity in a way that never feels clumsy. GLOW is a riotous celebration of female empowerment. Master of None tackles everyday sexism, sexuality, religion, and modern culture, well, masterfully.

It’s fine for a show to have a loose grip on reality if magic realism can be leveraged as a narrative device. Both Jane the Virgin and Ally McBeal used the fantasy-sequence trope to enrich the audience’s understanding. The problem with The Bold Type is it presents itself as reality. It’s clear the show is trying to be the younger sister of Sex and the City and it completely fails: it’s not nearly witty enough, fabulous enough, or ridiculous enough.

In a nutshell, The Bold Type is twenty years too late. Post-Girls female audiences want their dramedies with healthy serving of truth; they want characters and storylines they can resonate with; they want to inhabit a universe to which they can relate.

Jill Soloway, the activist, feminist showrunner and director, named her production company TOPPLE, short for TOPPLE THE PATRIARCHY. The Bold Type’s tagline for this Disney-funded show is “Smash the Patriarchy”, which is splashed all over their marketing materials. Make of that what you will. If you want to watch females grappling with modern life, wait for the fantastic Insecure to return to HBO later this month.