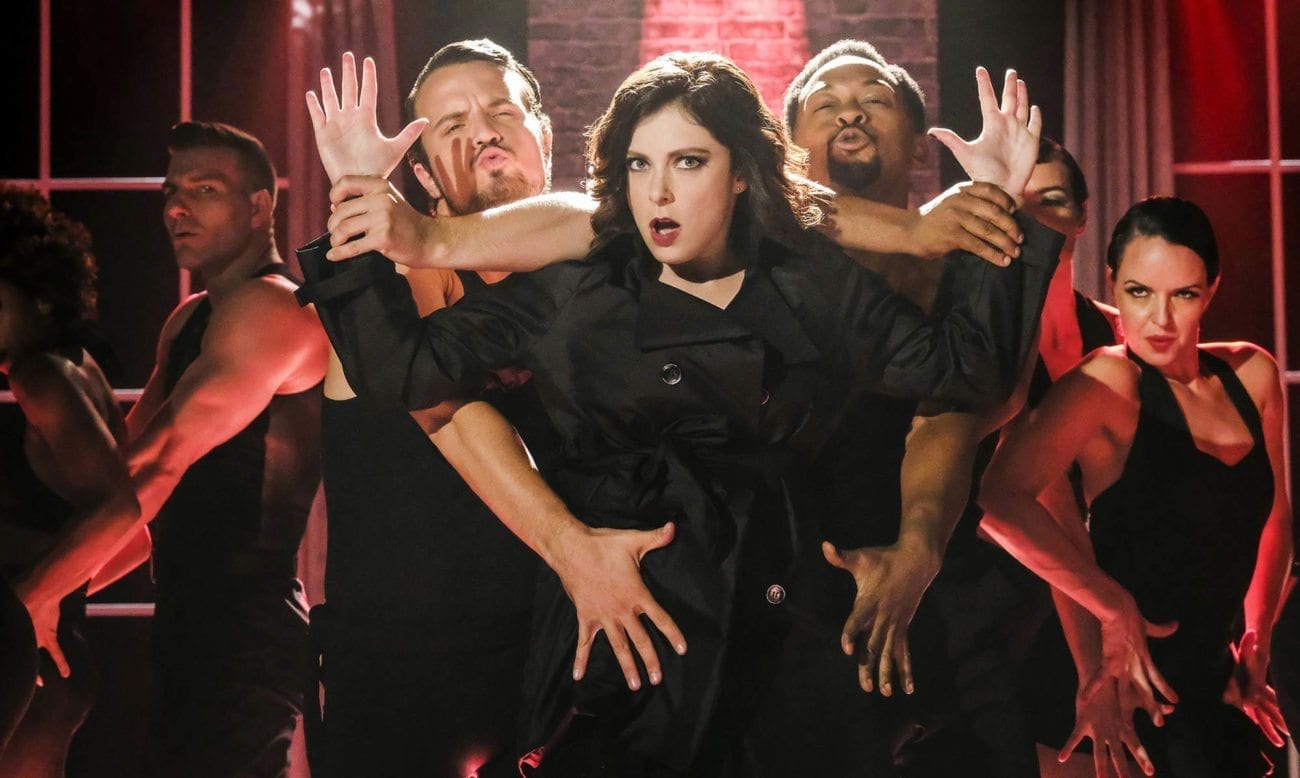 Crazy Ex-Girlfriend was once about eccentric lawyer Rebecca Bunch (Rachel Bloom) pursuing her high school bae, idiot jock Josh Chan (Vincent Rodriguez III) all the way from the glitzy offices of New York City to the strip malls of West Covina, California. Season three is about eccentric lawyer Rebecca Bunch trying to exact revenge on her high school bae, idiot jock Josh Chan. While not a smash hit ratings-wise, the show is a critical darling feather in The CW’s cap. Showrunners Rachel Bloom and Aline Brosh McKenna, (who’ve written stuff like like Robot Chicken and The Devil Wears Prada) have created a musical trapped inside a romantic comedy.

“To Josh, With Love” is about Rebecca teaming up with her money-obsessed, “evil” boss, Nathaniel (Scott Michael Foster) to throw down some hurtful thunder on Josh after he jilted her at the altar. Meanwhile, we watch Josh unable to connect at “priest school” after escaping to a church community in NorCal in a fit of wedding-based confusion. Alongside these threads we see Rebecca’s colleague, clueless Tim (Michael McMillan), advised at the office by squirrelish Maya (Esther Povitsky) and outspoken Paula (Donna Lynne Champlin) on how to make his marriage much more satisfying.

We first see Josh trying to “major in Christmas” in his hopes to become a priest. Avoidance tactic, much? The adorable façade presented in the first two seasons is quickly vanishing as Josh ignores how much hurt he’s wrought upon Rebecca – and thereby us. His opening hopeful optimistic song, “I’ve Got My Head in the Clouds”, exemplifies everything wrong with his outlook, in that he doesn’t see anything wrong, even to the point at which he’s incapable of basic empathy. The musical number is happy-go-lucky, cluing us in to the blissful ignorance of Josh.

Elsewhere, as Rebecca buddies up with Nathaniel we learn there’s a lot less to him than meets the eye. Is he a sociopath? A psychopath? We don’t care, because it’s a helluva lot of fun to watch Rebecca and her boss creating seductively evil revenge strategies. Rebecca’s salacious musical number, “Strip Away My Conscience”, is filled with lulz aplenty, replete with lyrics such as “let me choke on your cocksuredness”. This ditty is lavish and filled with closeups of Nathaniel’s bemused face to showcase his complete shock at Rebecca’s changing psyche. After Nathaniel unsheathes his evil plan to literally kill some of Josh’s family, Rebecca storms off in total confusion as to how she can actually “get evens” with Josh.

Coming at the climax (no pun intended . . . fine, it was intended), we’re treated to a determined and furious Rebecca, clad in her wedding dress, storming into the church to which Josh has exiled himself. She unleashes unto him a twisted reprise of Paula’s “After Everything You Made Me Do”, with truth bomb after truth bomb detailing every embarrassing event of their dysfunctional relationship, before wishing Josh a final “goodbyeeeeeeee”. We’re left for a few seconds before Josh erupts in triumphal glee that it’s “not my fault”. Rebecca collapses in her car, quickly moving from victory to defeat in realizing she told him – oh no – “everything”: an incredible and satisfying finale to an episode about dissatisfaction. Finally these two characters, who haven’t spoken in weeks, collide with anger & truth.

“To Josh, With Love” is an episode about catharsis and the lack thereof. Josh seems incapable of it while Rebecca cannot find it: two characters who, after a period of separation, finally see each other as who they really are, making the small resolution we do experience especially powerful.