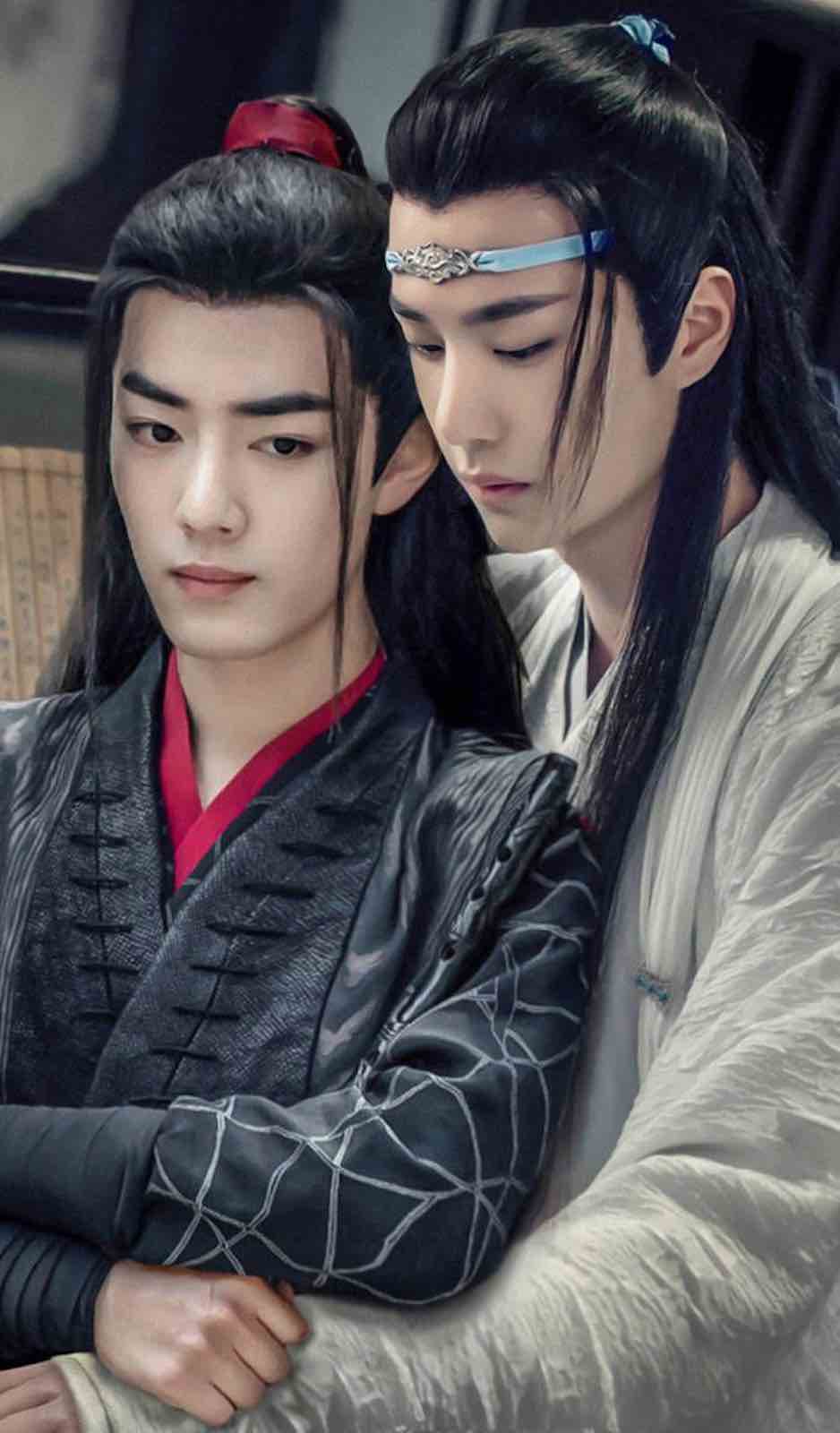 The Untamed is the story of Wei Wuxian (Xiao Zhan) & Lan Wangji (Wang Yibo), two young cultivators that fall in love in ancient China. Both males, a relationship of this nature is wildly unacceptable in those times. Despite this, unable to stay away from each other, their relationship develops anyway.

Here’s the problem. Even in modern-day China, there are strict laws that prohibit the depiction of LGBTQ relationships & themes on entertainment platforms. While homosexuality is no longer strictly illegal in China, the depiction of such relationships on television is. China has been known to pull successful shows from the air, banning actors from working together on future projects. 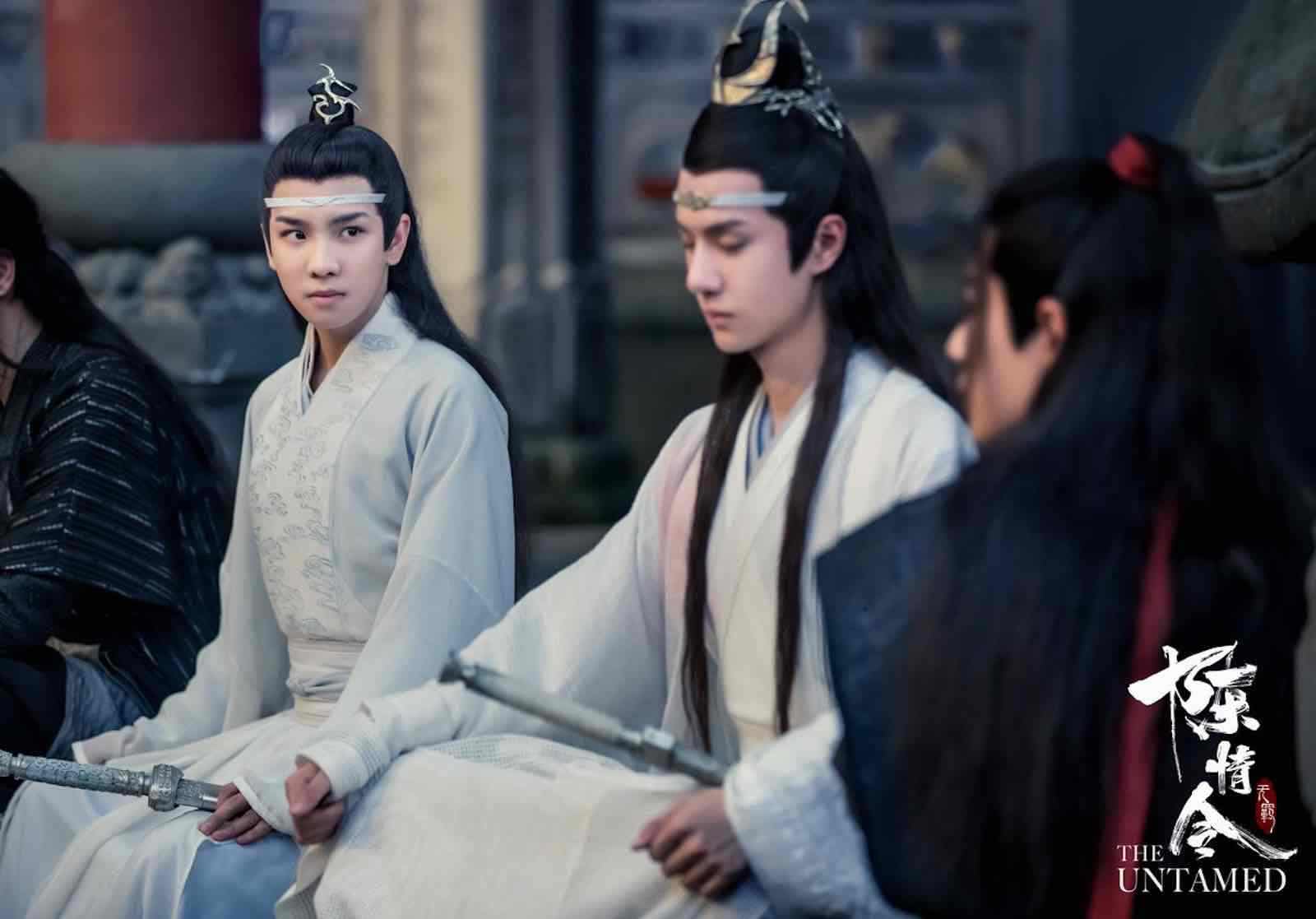 Fans of the show have stormed the internet to discuss & analyze all the moments that occur which can confirm that Lan Wangji & Wei Wuxian are in fact in love. There are many of these, including several exchanges that warranted verbal confirmation of the boy’s love for each other.

So come with us as we journey through The Untamed and unpack all the times Lan Wangji would have said “I love you” if Chinese censorship had allowed it. 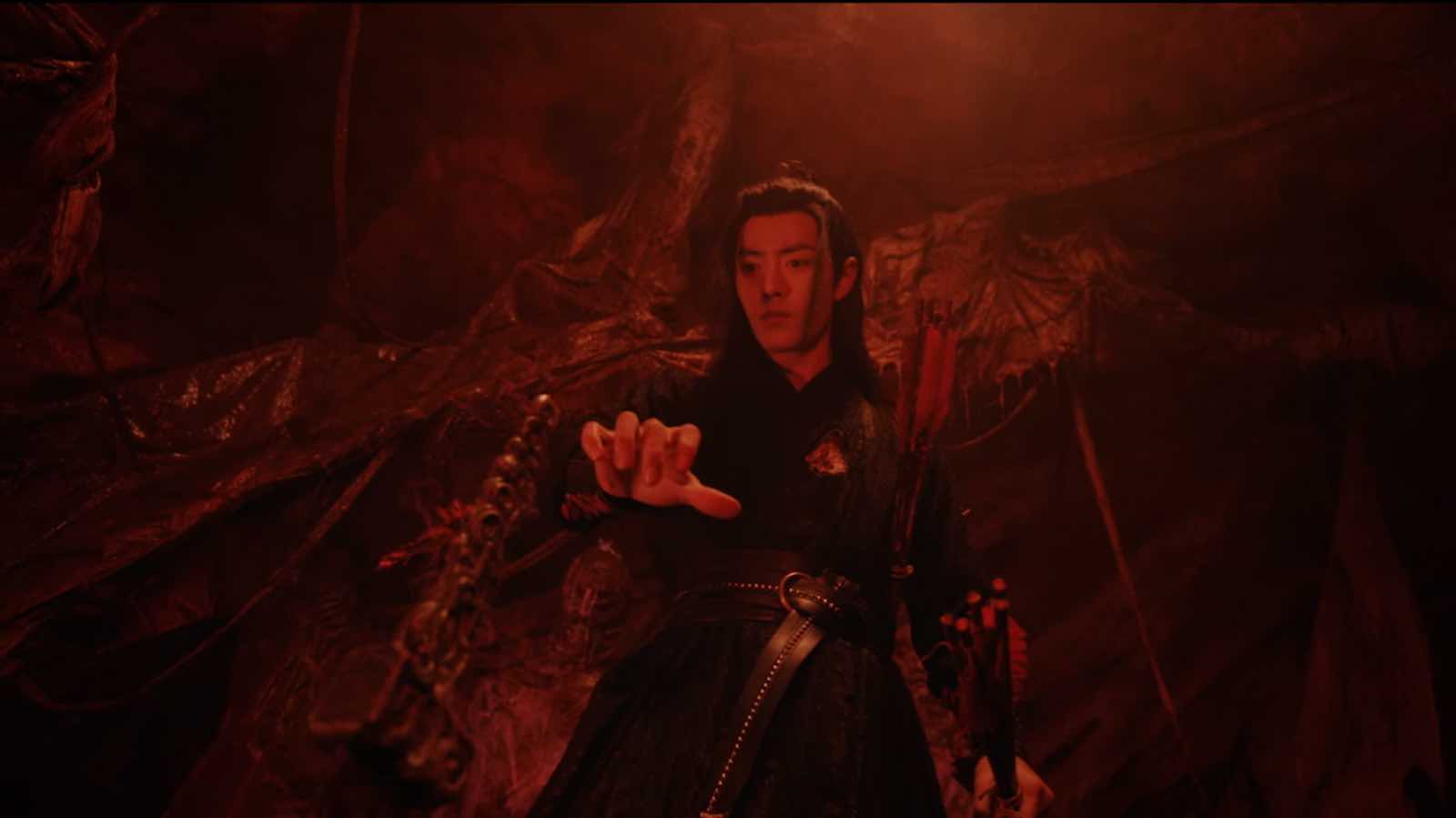 In this episode, Lan Wangji & Wei Wuxian are trapped inside a cave. In order to free themselves, they must first defeat Xuanwu, a mythical giant black tortoise. Lan Wangji makes it clear that the thing in front of them is not the real Xuanwu, but in fact, a fake version, the Tortoise of Slaughter left there by Xue Chonghai, who was responsible for creating the pieces of yin metal.

Of course, an epic battle ensues. Wei Wuxian is seriously injured & catches a fever. In his delirious state, Wei Wuxian still manages to tease Lan Wangji, stating the never expecting that Lan Wangji would ever show such concern for him. Wei Wuxian continues rambling, complaining that it’s too quiet. He asked Lan Wangji to sing him a song & Lan Wangji begins humming. 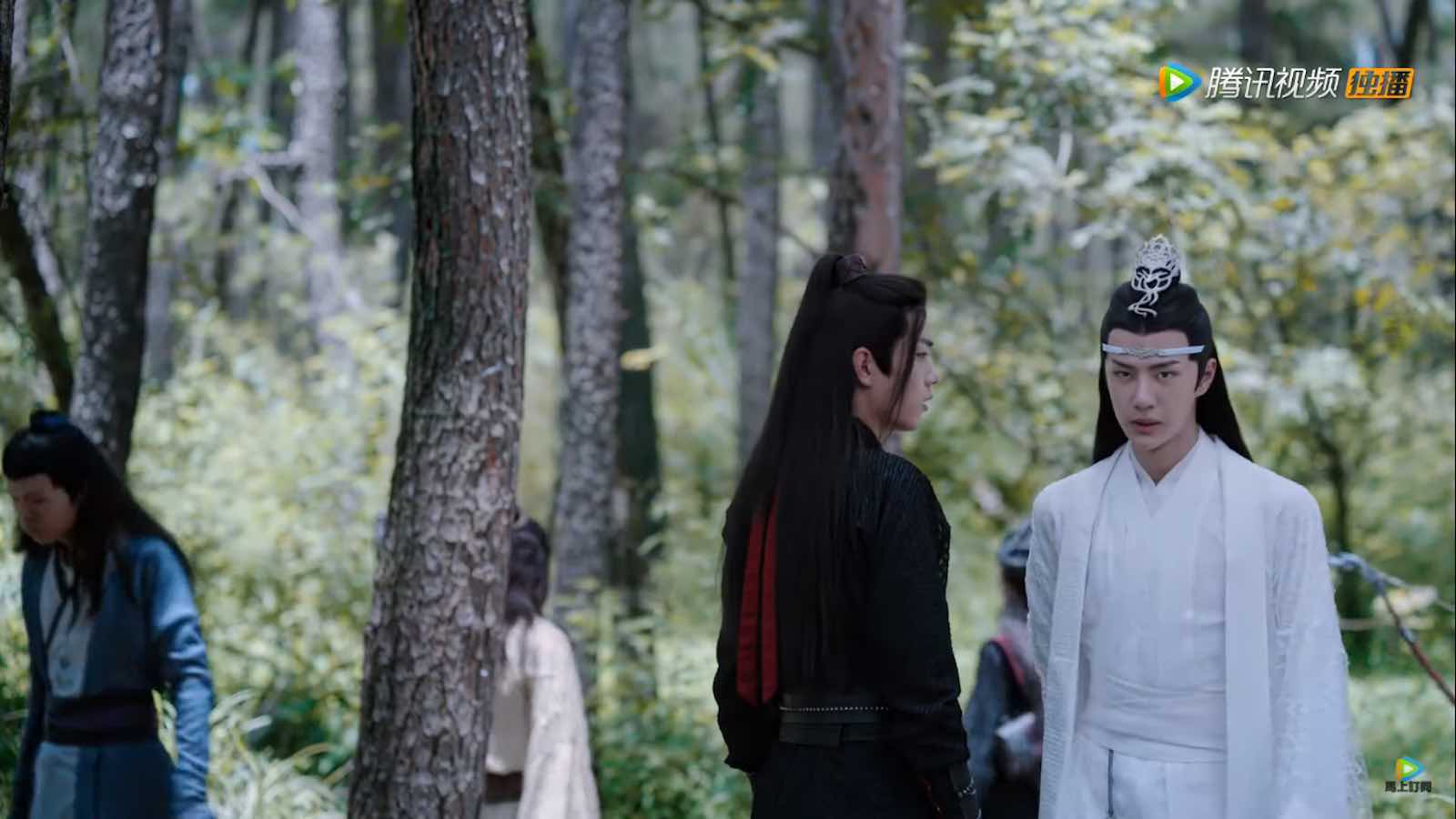 The tune is, in fact, the same as the theme song to the show, which kicks in a few seconds later. Wei Wuxian is on the verge of passing out and asks the name of the song. Although we don’t hear the words because of Chinese censorship, Lan Wangji tells him that it’s called WangXian, which is a combination of both their names.

This is the first moment where Lan Wangji would have said “I love you” to Wei Wuxian, if Chinese censorship did not prevent it. Lan Wangji actually wrote the song for the two of them as a declaration of his love he feels for Wei Wuxian. It was the first time he’d shared the song with Wei Wuxian so it was an appropriate replacement for the actual words. Excuse us a moment, while we go and cry in the corner!

Note: while Lan Wangji tells Wei Wuxian the name of the song is WangXian, its official release title is actually Wuji.

At the beginning of this episode, Lan Wangji is passed out drunk. Wei Wuxian puts him to bed and then goes out onto the street and begins playing Wangxian on the flute. However, it isn’t long before Lan Wangji appears on the street in front of him while he is conversing with Wen Ning. Drunk Lan Wangji just wants to be near Wei Wuxian. Wei Wuxian agrees to take him back to the inn, but in true Wei Wuxian fashion, he can’t find the way. 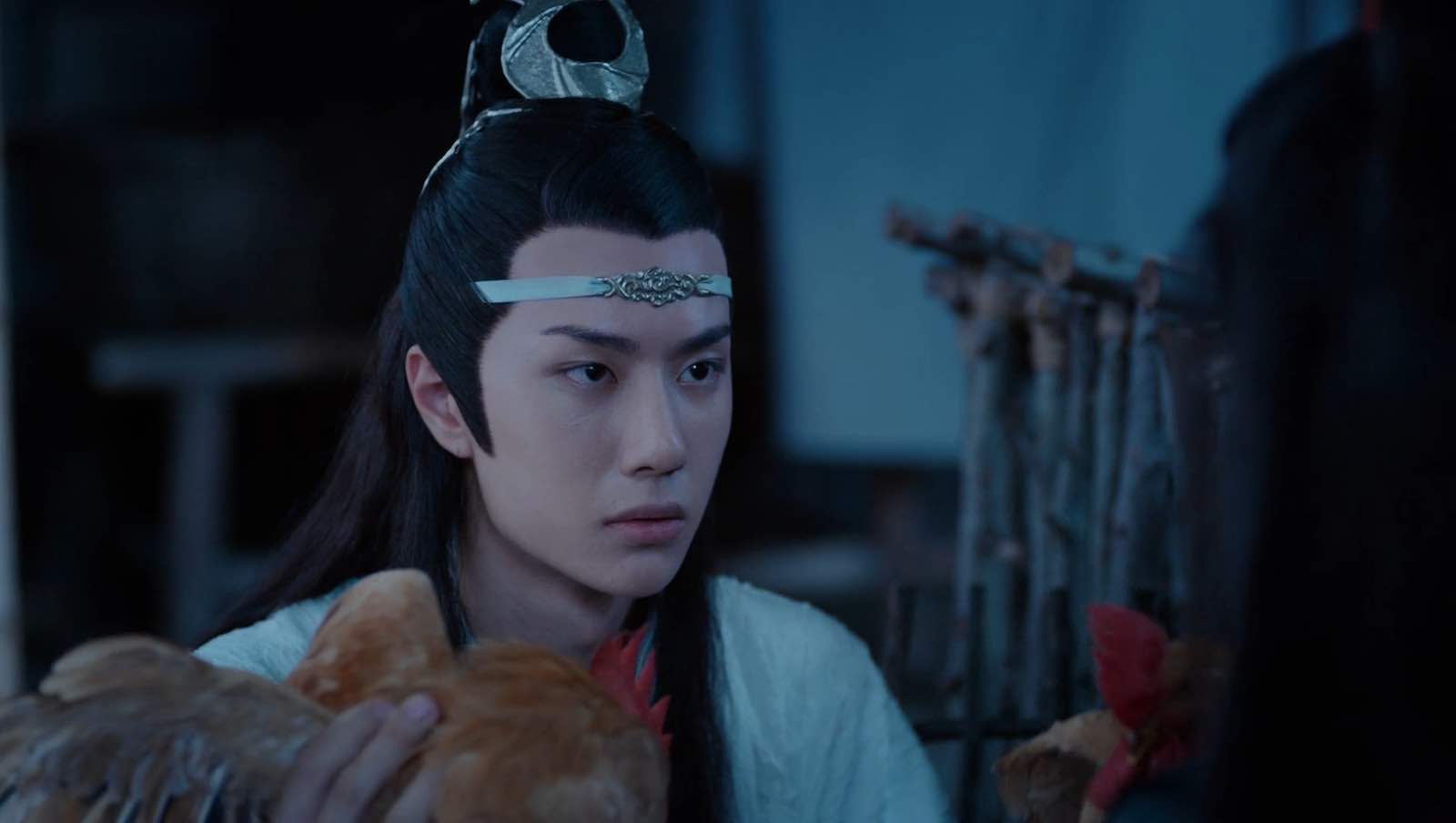 A popular theory here is that, in his drunken state, Lan Wangji was, in fact, declaring his love for Wei Wuxian with the chickens & proposing marriage. But wouldn’t Chinese authorities notice something like that? Well, yes. However, you’ll notice in the scene that Wei Wuxian is really confused by the whole thing and even says that Lan Wangji is just acting crazy, but we know better.

In his drunken state, if Lan Wangji is, in fact, proposing marriage here, had the show been uncensored, viewers would definitely have been treated to a drunken love confession of epic proportions. The expression on Lan Wangji’s face as he is waiting for Wei Wuxian’s response says it all. Lan Wanji is totally Wei Wuxian’s trash in this scene, and we are here for it! 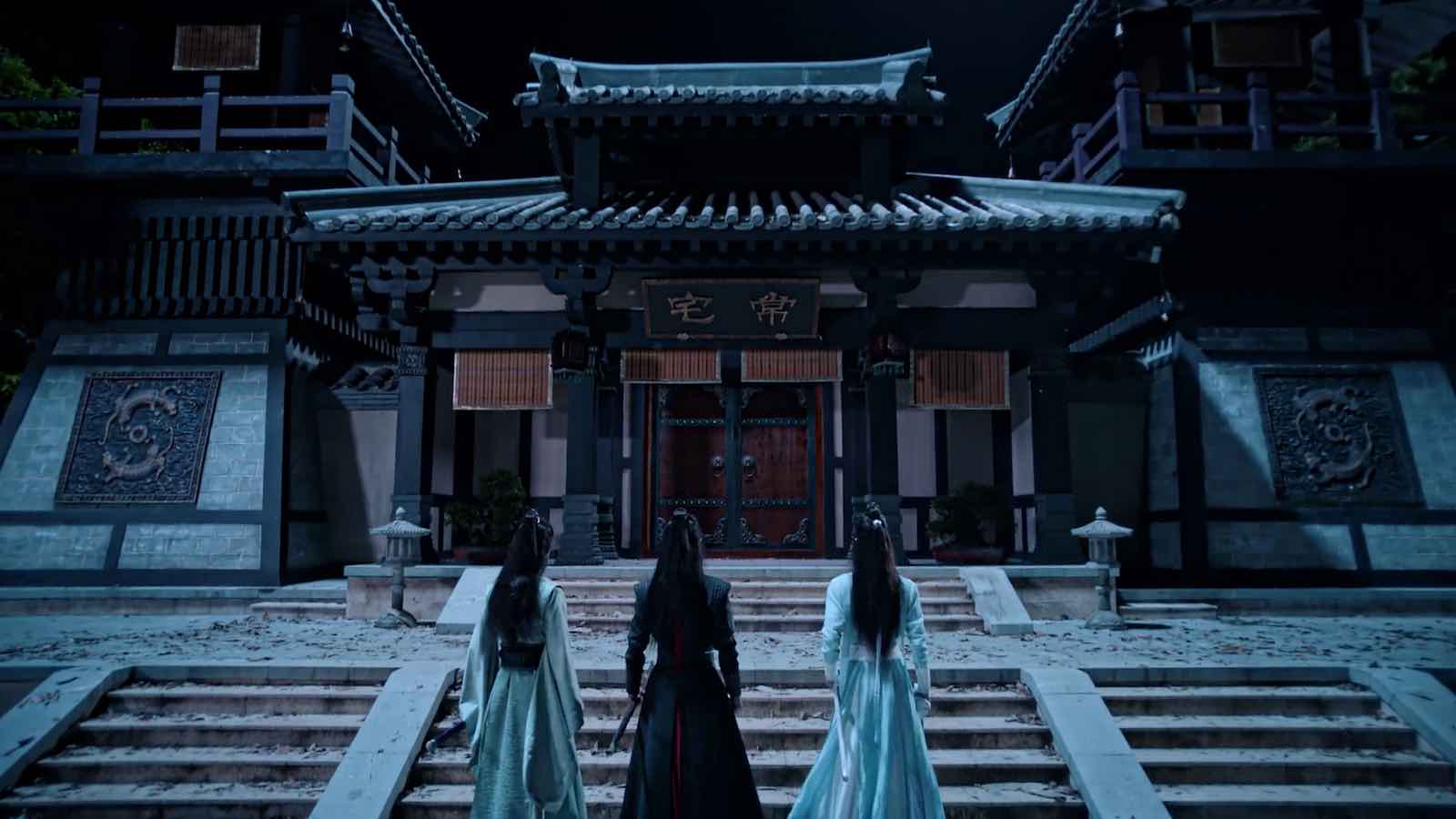 Episode 42: The aftermath of Carp Tower

After demanding to look through Jin Guang Yao’s (Zhu Zan Jin) secret vaults, Wei Wuxian & Lan Wangji aggravate the man enough that he becomes combative. It is quickly uncovered that the man accompanying Lan Wangji is not, in fact, Mo Xuanyo (Xiao Zhan), but in fact a resurrected Wei Wuxian.

Chaos ensues and the two attempt to flee. Surrounded on the steps of Carp Tower, Jin Guang Yao says that he feels that Wei Wuxian must have tricked Lan Wangji, because someone as noble as Lan Wangji would never associate with someone as evil as Wei Wuxian. 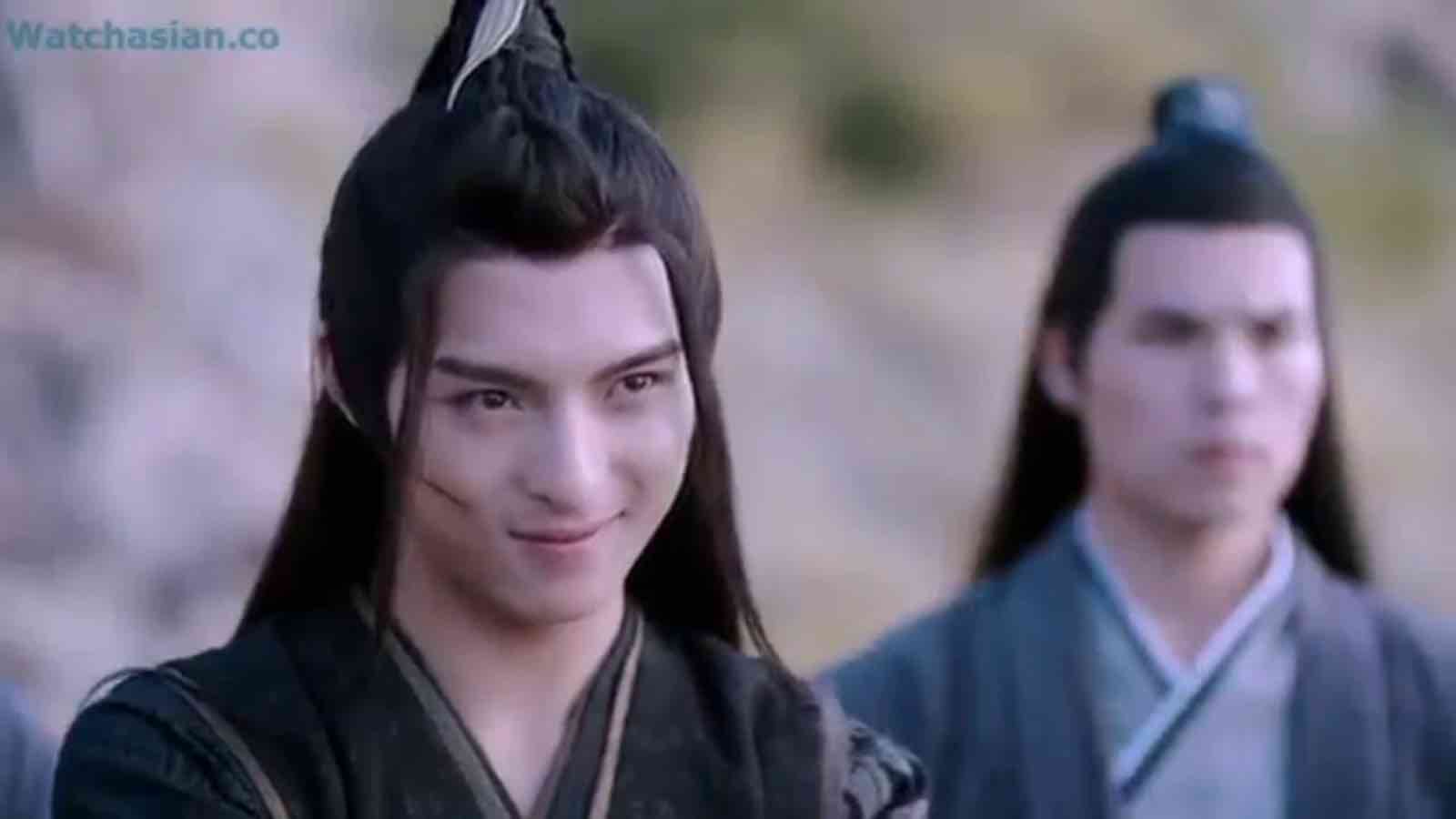 In a tense, but epically beautiful moment, Lan Wangji loudly corrects him, telling everyone that he knew that he was Wei Wuxian in Mo Xuanyu’s body all along. Wei Wuxian tries to convince Lan Wangji to pretend Wei Wuxian tricked him so his reputation can remain intact, but Lan Wangji isn’t having it.

The two of them then proceed to have an incredibly intimate conversation while holding onto each other’s wrists (because they can’t hold hands due to censorship) while everyone in their cultivation society watches them and listens on. Lan Wangji essentially communicates that he will stand by Wei Wuxian, regardless of consequences. They pretty much out themselves in front of their entire cultivation society.

While this moment is indeed one of the most romantic moments in the entire show, this is not where Lan Wangji’s next “I love you” would have taken place. The two manage to escape Carp Tower after Wei Wuxian is stabbed by his nephew. Lan Wangji is assisting a very injured Wei Wuxian along in the rain when it becomes apparent they need to stop and rest. 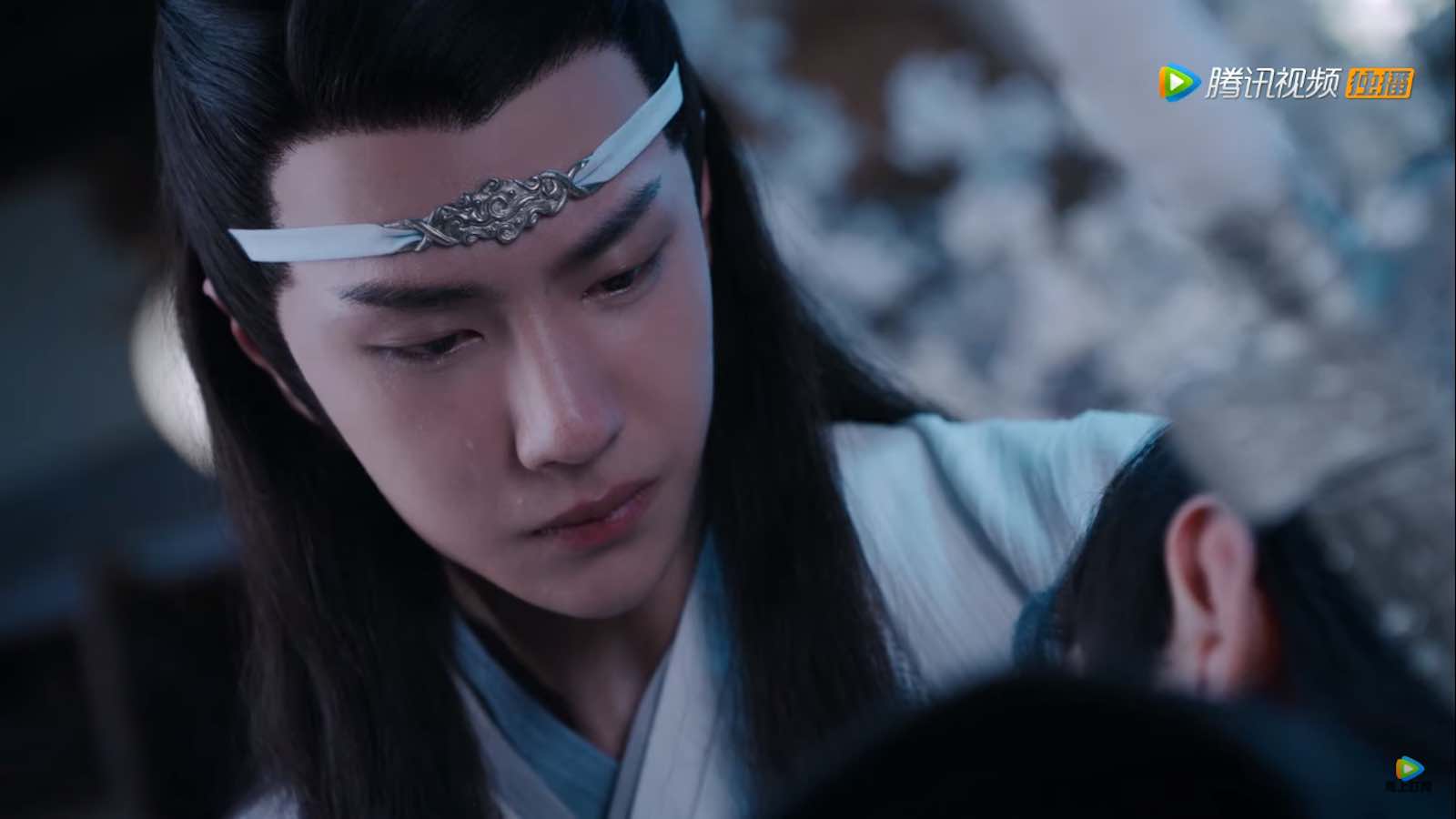 Lan Wangji props Wei Wuxian up against a tree. Wei Wuxian points out that Lan Wangji is the only person standing by him anymore. In the scene, Lan Wangji responds by gazing longingly into Wei Wuxian’s eyes, but this is where he would have replied with “I love you” had he been able to.

The moment is very intimate & private. Although Lan Wangji had reassured him that they were in this together on the steps at Carp Tower, now that they are alone, those words would naturally have flowed, giving Wei Wuxian the reassurance he needed, while perfectly completing the scene 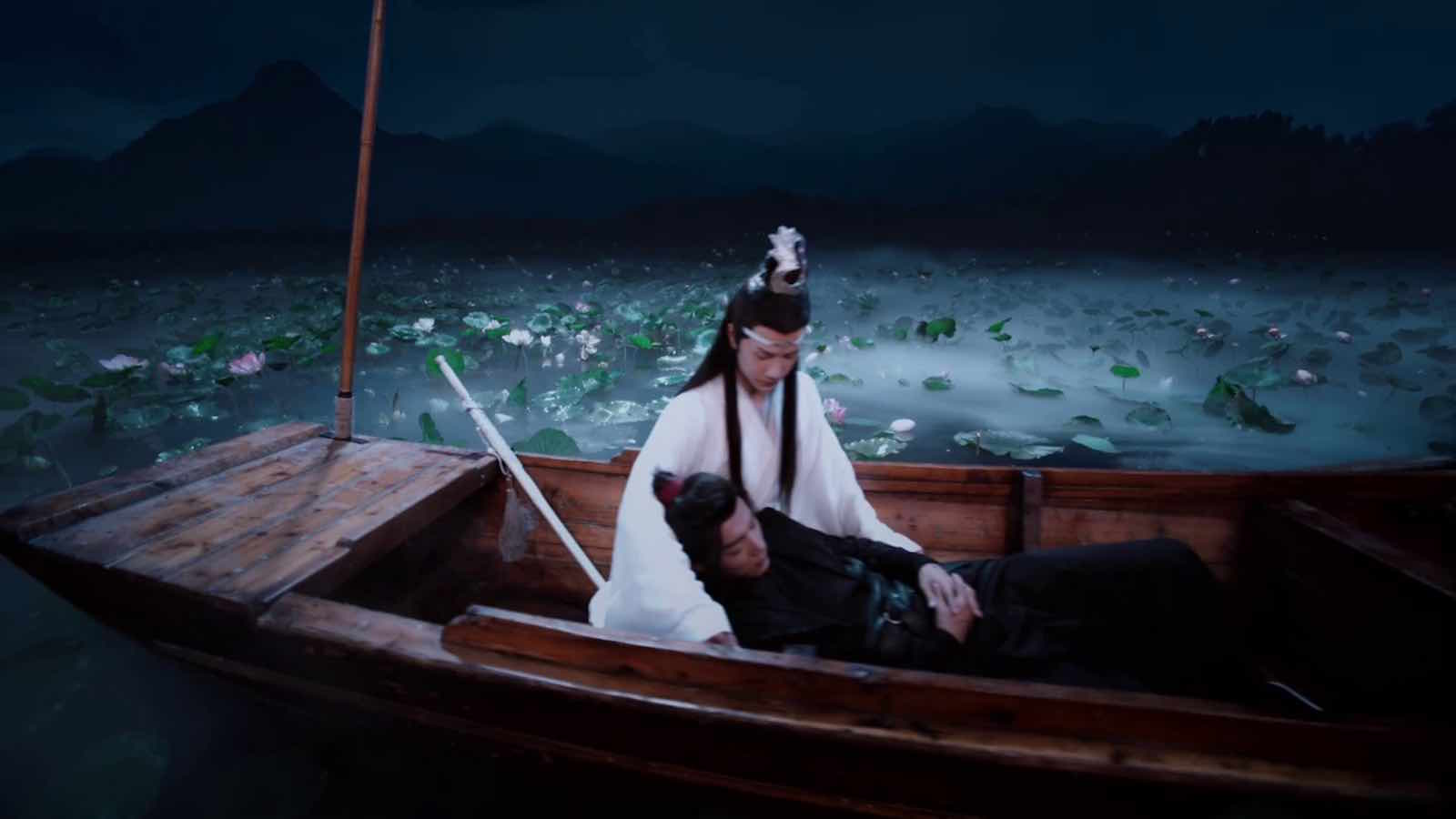 In this episode, everyone is gathered at Lotus Pier, including Lan Wangji & Wei Wuxian. It’s the first time Wei Wuxian has been back since he was resurrected. After a fight with Jiang Cheng (Wang Zhuo Cheng), Wei Wuxian is passed out, laying in Lan Wangji’s arms while Wen Ning (Paul Yu) tells Jiang Cheng that the golden core running through his body actually belongs to Wei Wuxian.

On account of being passed out, Wei Wuxian doesn’t hear this conversation, but Lan Wangji certainly does. A look of complete devastation washes over Lan Wangji’s face as he listens to Wen Ning recount the details of that day. Lan Wangji begins to cry & eventually picks up Wei Wuxian and leaves Lotus Pier with Wen Ning.

Wei Wuxian eventually wakes up in Lan Wangji’s arms in a boat on the lake. Lan Wangji doesn’t tell Wei Wuxian that he knows about the transference of his golden core, but it’s obvious that Lan Wangji is having trouble holding back his emotions. 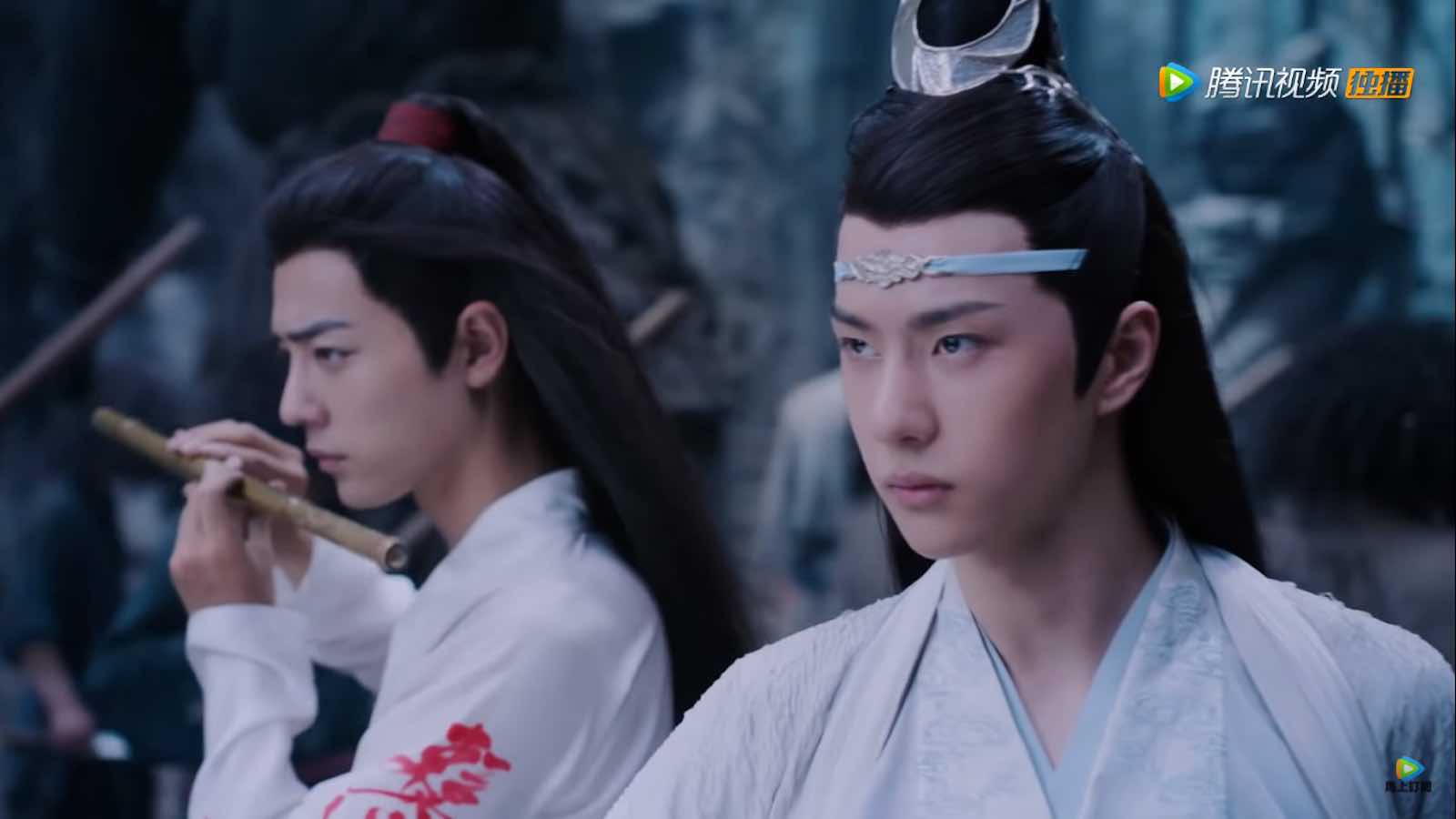 Lan Wangji is an honorable man who would never condone, or participate in stealing someone else’s property. In this particular moment though, after learning about what Wei Wuxian went through all those years ago, as Wei Wuxian begins to pick Lotus flowers from the lake to eat, Lan Wangji is unable to deny him this small pleasure.

The look on Lan Wanji’s face in this moment is clear: he loves Wei Wuxian with his entire being and can’t bear what happened to him over the years. Even Wei Wuxian seems surprised by Lan Wangji’s emotion here. The intensity of his eyes says it all. If he could have, Lan Wangji would definitely have told Wei Wuxian how much he loves him in this moment, without question.

Instead, because of censorship laws in China, viewers were robbed of this moment and the boys sit in the boat on Lotus Pier Lake eating lotus seeds instead. 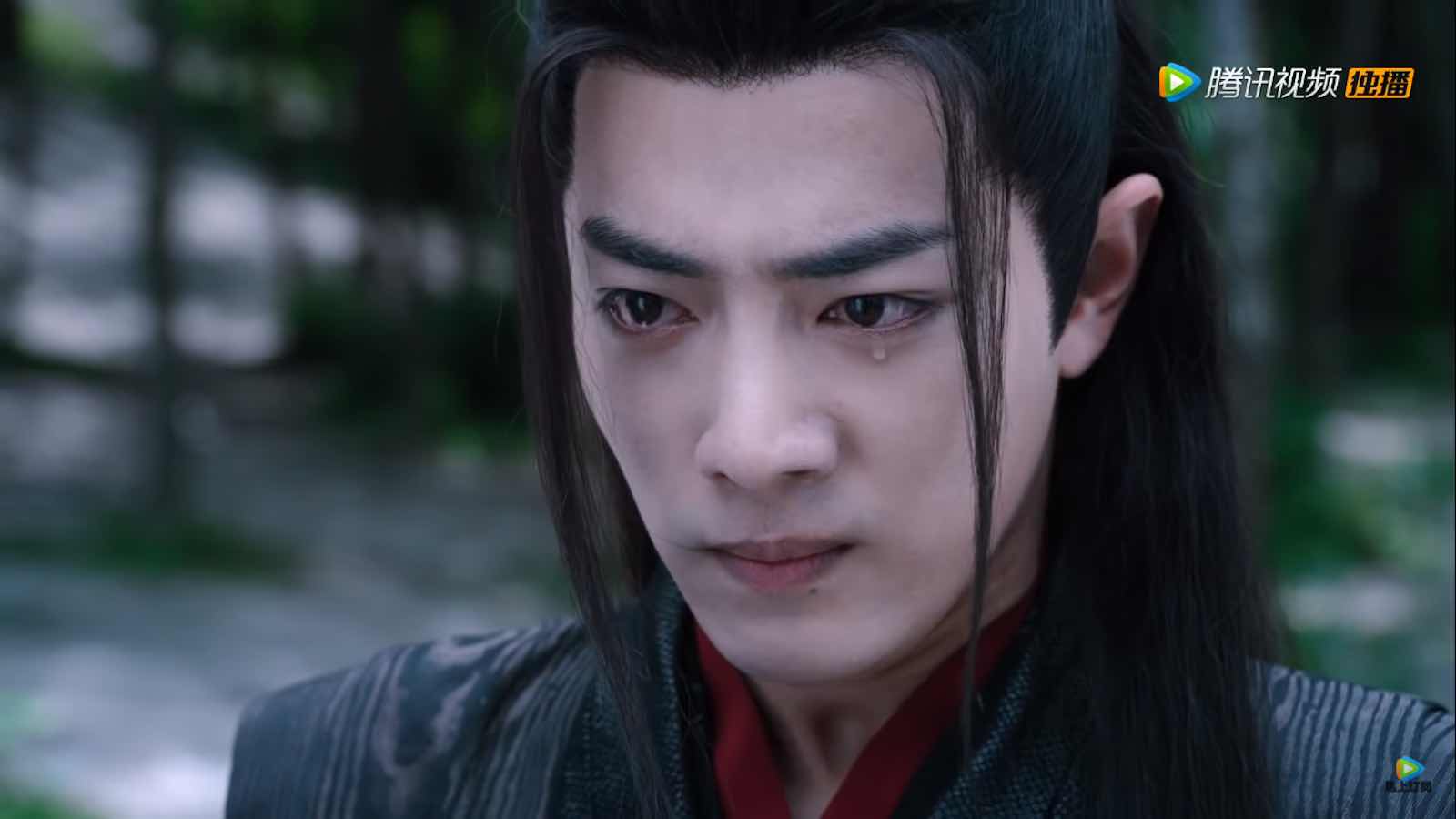 At the end of episode 50, Wei Wuxian & Lan Wangji begin their journey home. Lan Wangji is about to tell Wei Wuxian that Lan Sizhui (Zheng Fanxing) is actually Wen Yuan, when Lan Sizhui and Wen Ning interrupt them.

After speaking with Wen Ning over the past few days, Lan Sizhui suspects that he might actually be Wen Yuan from Burial Mounds. When Lan Sizhui asks this question to both Wei Wuxian & Lan Wangji, both Lan Sizhui & Wei Wuxian are overcome with emotion when Lan Wangji confirms it. Wei Wuxian & Lan Sizhui embrace emotionally. This is the only embrace shown on camera throughout the whole show.

Lan Wangji confirms that we went back to Burial Mounds and found Wen Yuan hiding in the cave. Apart from the fact that Lan Wangji knew how important Wen Yuan was to Wei Wuxian, someone like Lan Wangji would never leave a child to die like that. Lan Wangji took Wen Yuan back to Cloud Recesses and the Lan clan raised him as their own. 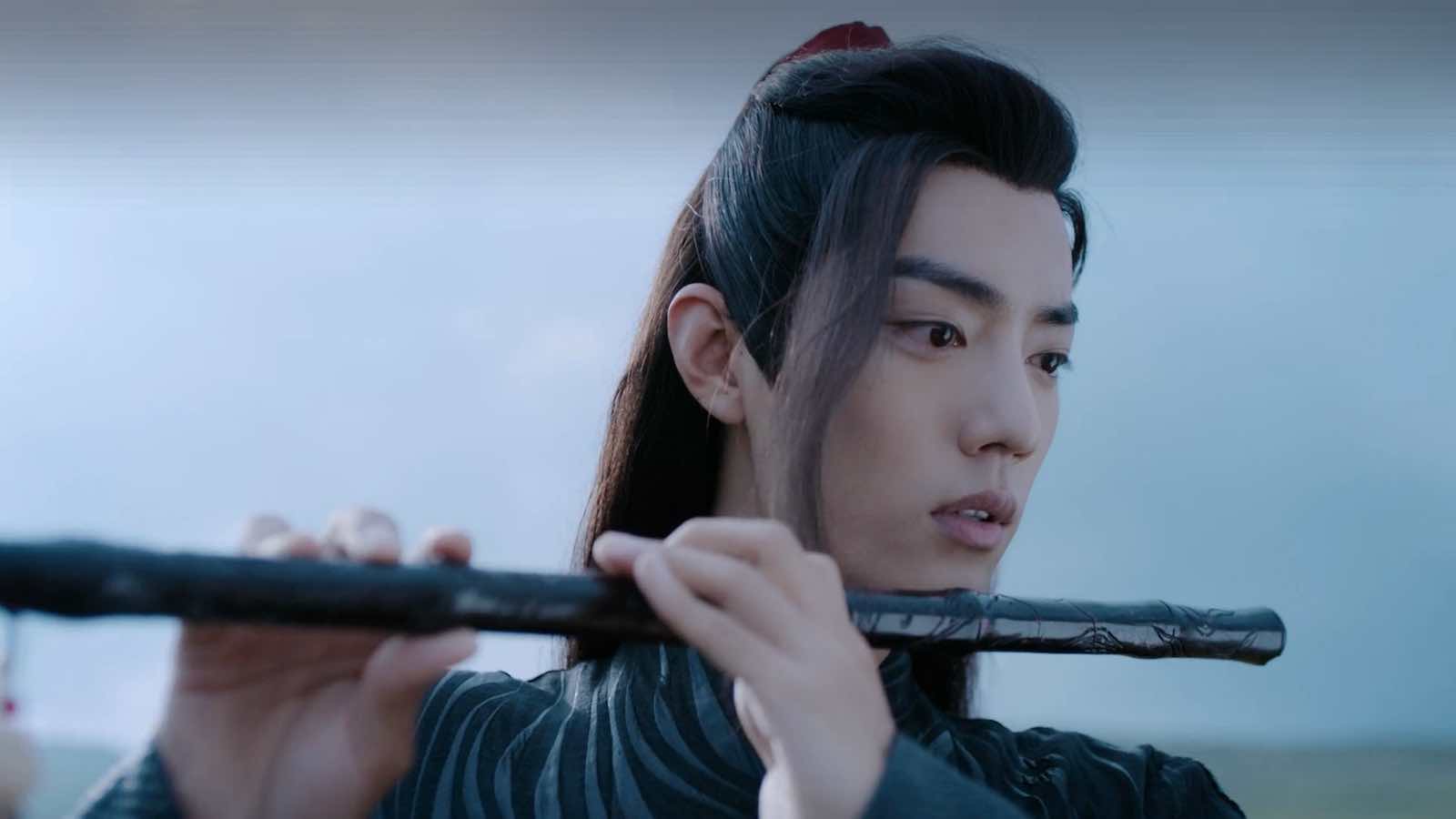 The Untamed is perfect in every single way, even without these particular moments. The relationship between Lan Wangji & Wei Wuxian, and the love they have for each other bleeds all over the screen, regardless of censorship.