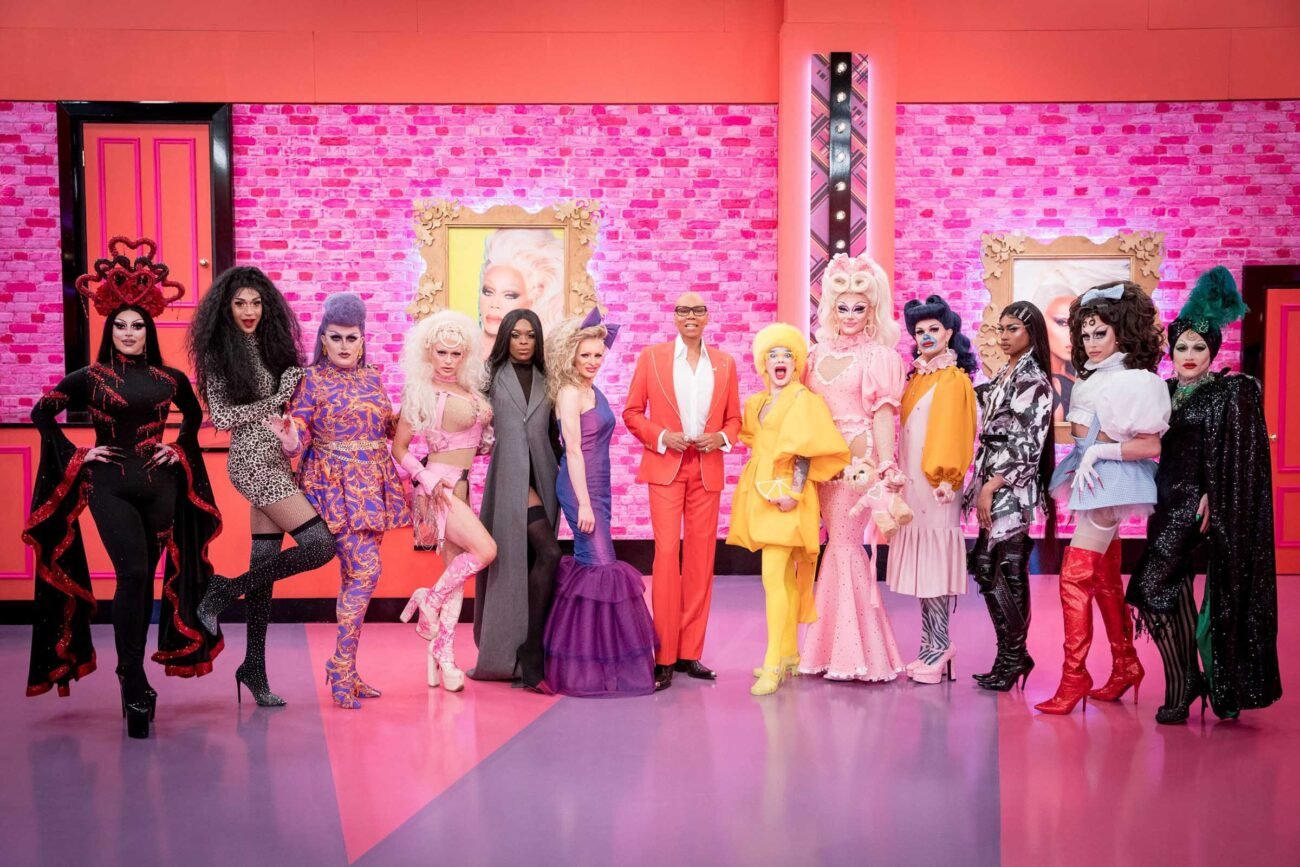 It looks like the werkroom is filled up on lemon pie.

Drag Race UK went for morning TV this week with a maxi challenge judged by British daytime TV royalty Lorraine Kelly. While everyone and their mom was sure it was going to be Sister Sister and Veronica Green in the lip sync, somehow Veronica got it together with her runway lewk, leaving everyone’s favorite crazed aunt Ginny Lemon competing against their loving Sister.

But in true Drag Race fashion, you can never expect what comes next. Ginny Lemon pulls a BenDeLaCreme and walks off during the lip sync, refusing to send Sister Sister home. “I would have regretted it if I had tried to fight against something I didn’t want to fight against. I don’t think I’ve tapped out of the competition. I did it for me,” they said. 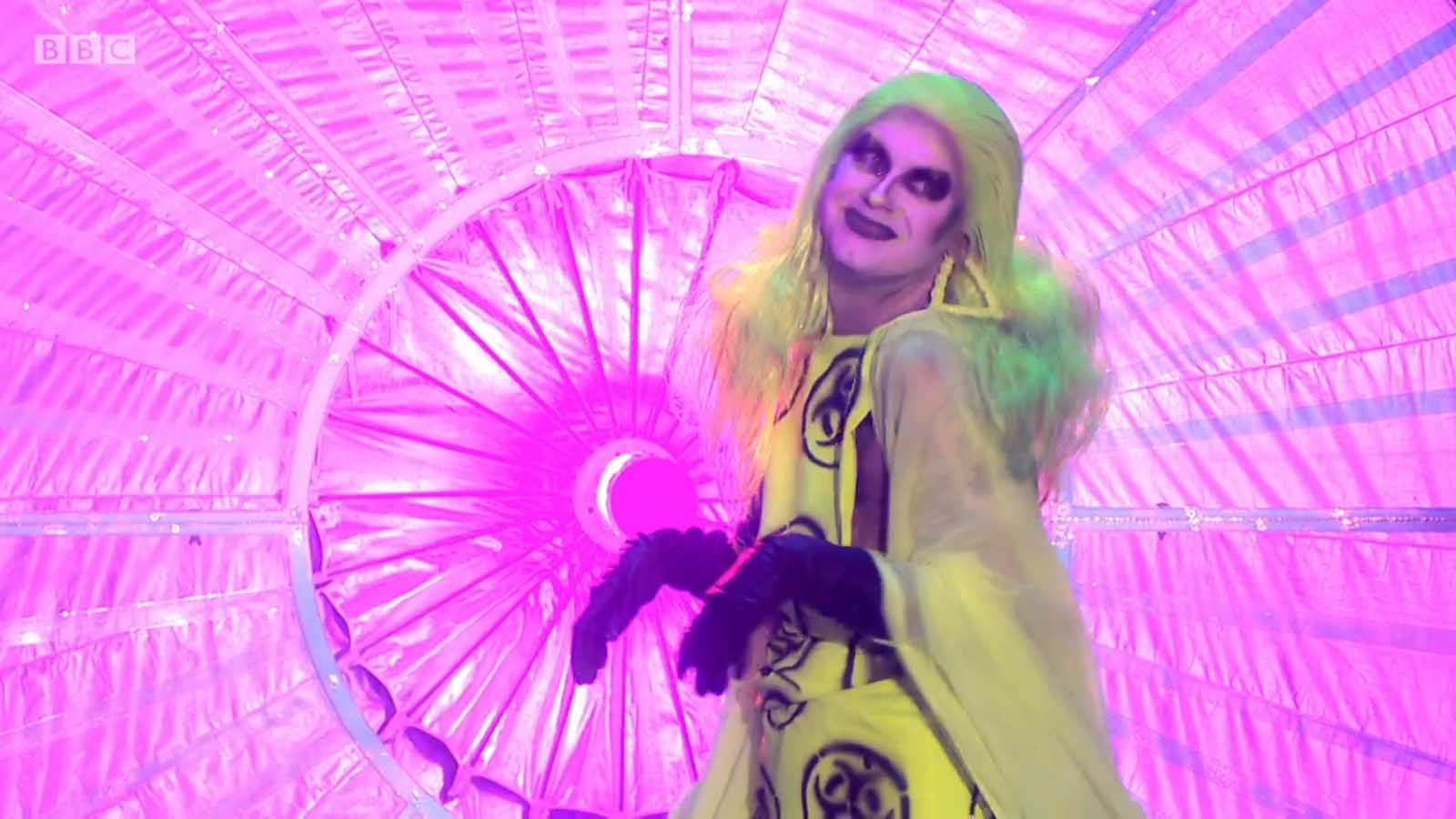 In our interview with Ginny, we had to get the tea on their exit. What pushed them to know this was the end of the line for them? Turns out, it’s just as simple as you’d think: they were ready to go home. “I thought, ‘Ginny is outta here! Later! I need to lie down and have a cup of tea.’” they said about that moment.

A self-elimination has only ever happened once in Drag Race history with BenDeLaCreme, and Ginny is the first in Drag Race UK history to do so as well. Though, Ginny hopes people start doing it in real life too. “It is fabulous and I think that if anybody is in an environment that they no longer want to be in anymore, then they should do a Ginny Lemon, and just go home.” 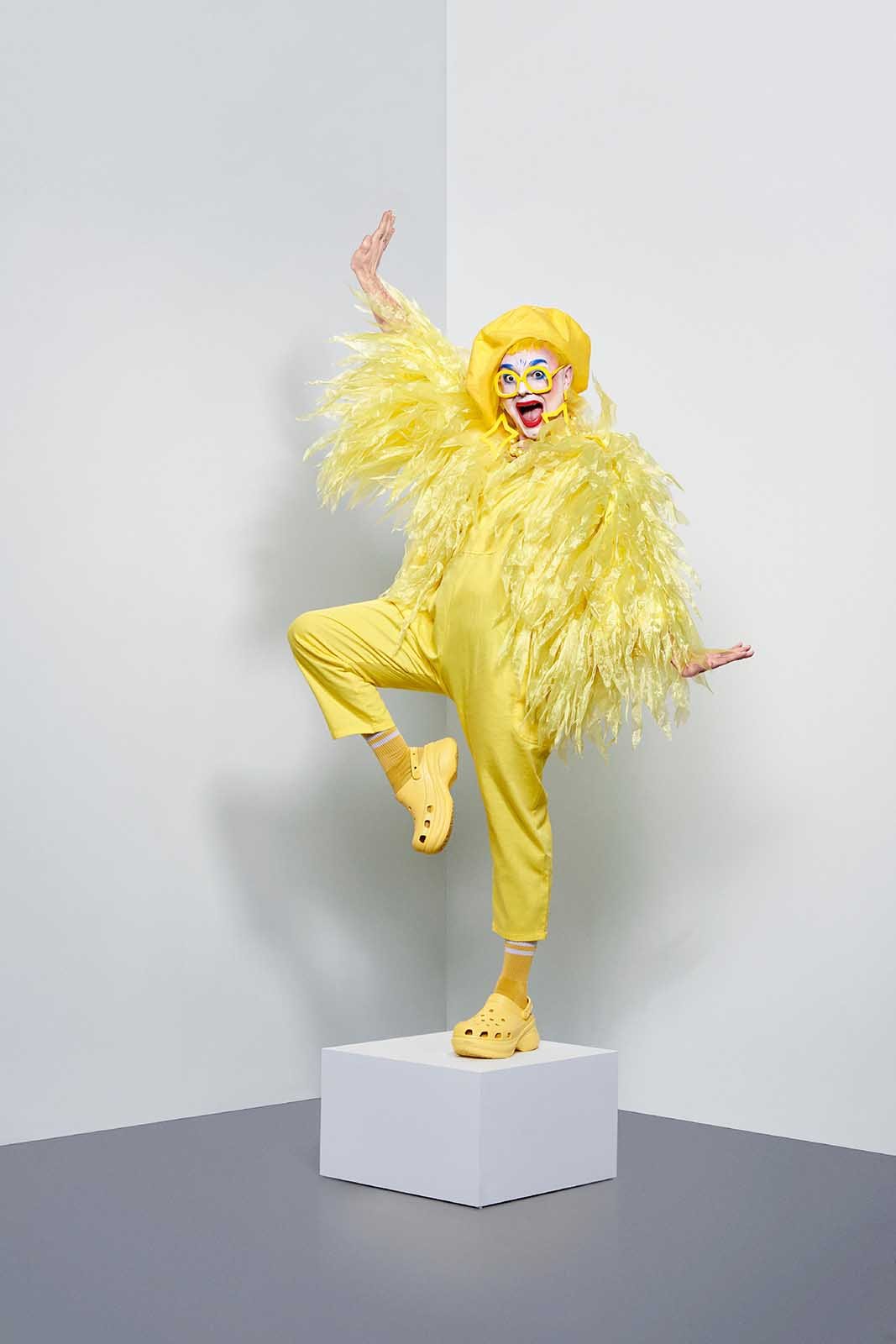 If last night’s moment didn’t make us love Ginny enough, their conversation about being nonbinary made us want to give them all the love in the world. But Ginny was caught off guard by how people received their conversation. “I’m completely flabbergasted and at a loss for words at the reaction that conversation has had on people. I was very much just a vulnerable human having a conversation with a human at the time.”

You can read our entire interview with Ginny Lemon below. 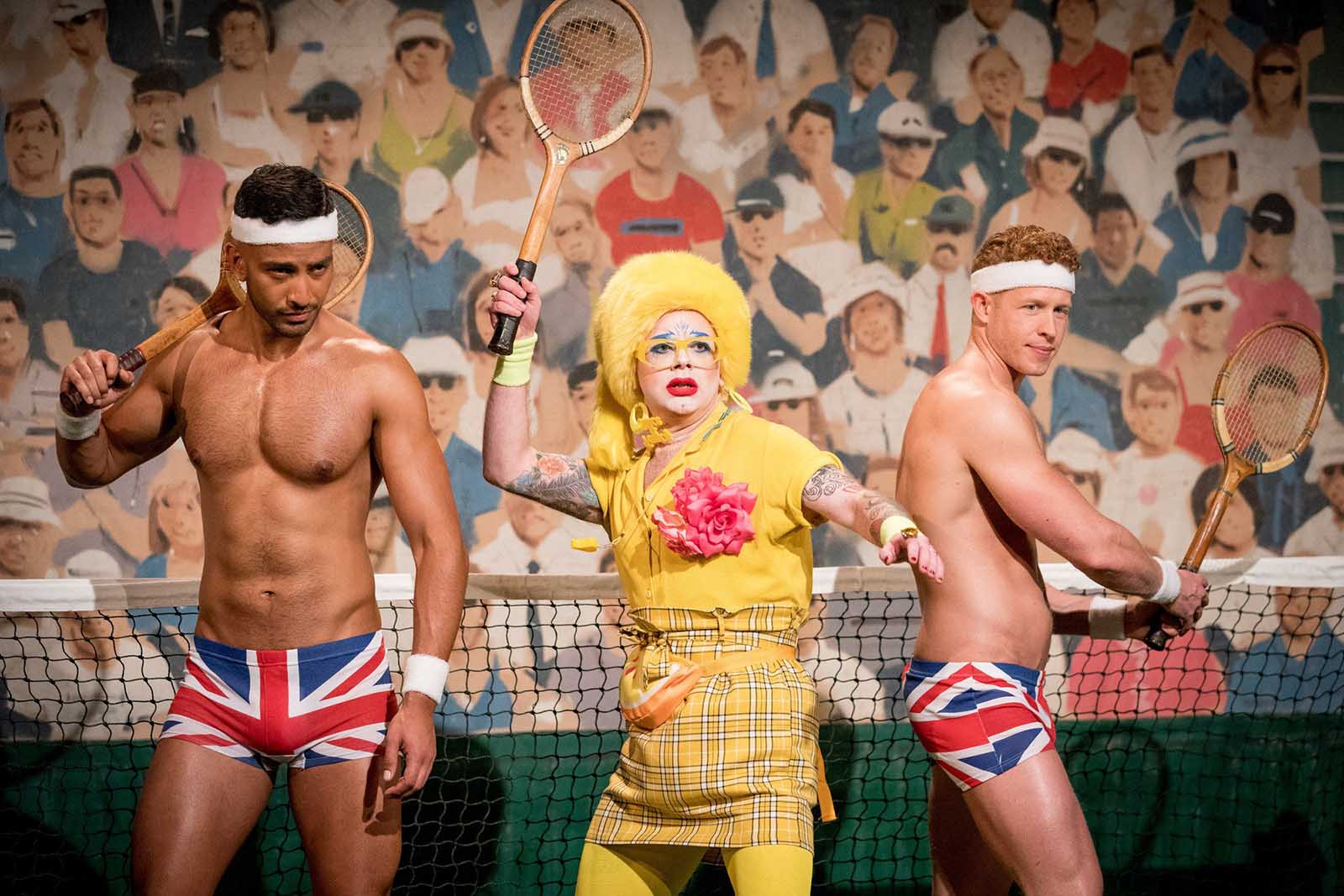 I always have a very sad answer to this: the reason I got into drag was in 2016, my sister passed away. So I did it as a way of kind of escaping grief, I did it as my performance therapy, really. I’d always been interested in being a performer for a long time but I think I needed that element of escapism, to deal with my sister’s death.

Why audition for Drag Race UK, and what was your reaction when you were chosen?

Well, I thought it would be absolutely stupid and naive of me not to audition and to give it a go. I mean, it’s the largest platform for drag entertainment and I felt this insatiable desire to get on Drag Race and start breaking the binary and having those conversations. So I was overwhelmed.

Also, I was just shocked. I never thought that a queen like me, an alternative non-binary queen could make it onto the show so I was just shocked and very delighted. I couldn’t thank them enough for accepting me on the show.

Tell us who Ginny Lemon is as if we never heard of you before.

Ginny Lemon is the acidic, 90s daytime TV presenter at a rave festival on mushrooms, your sleep paralysis demon, and also the Miss Congeniality that you’ve always longed to love. 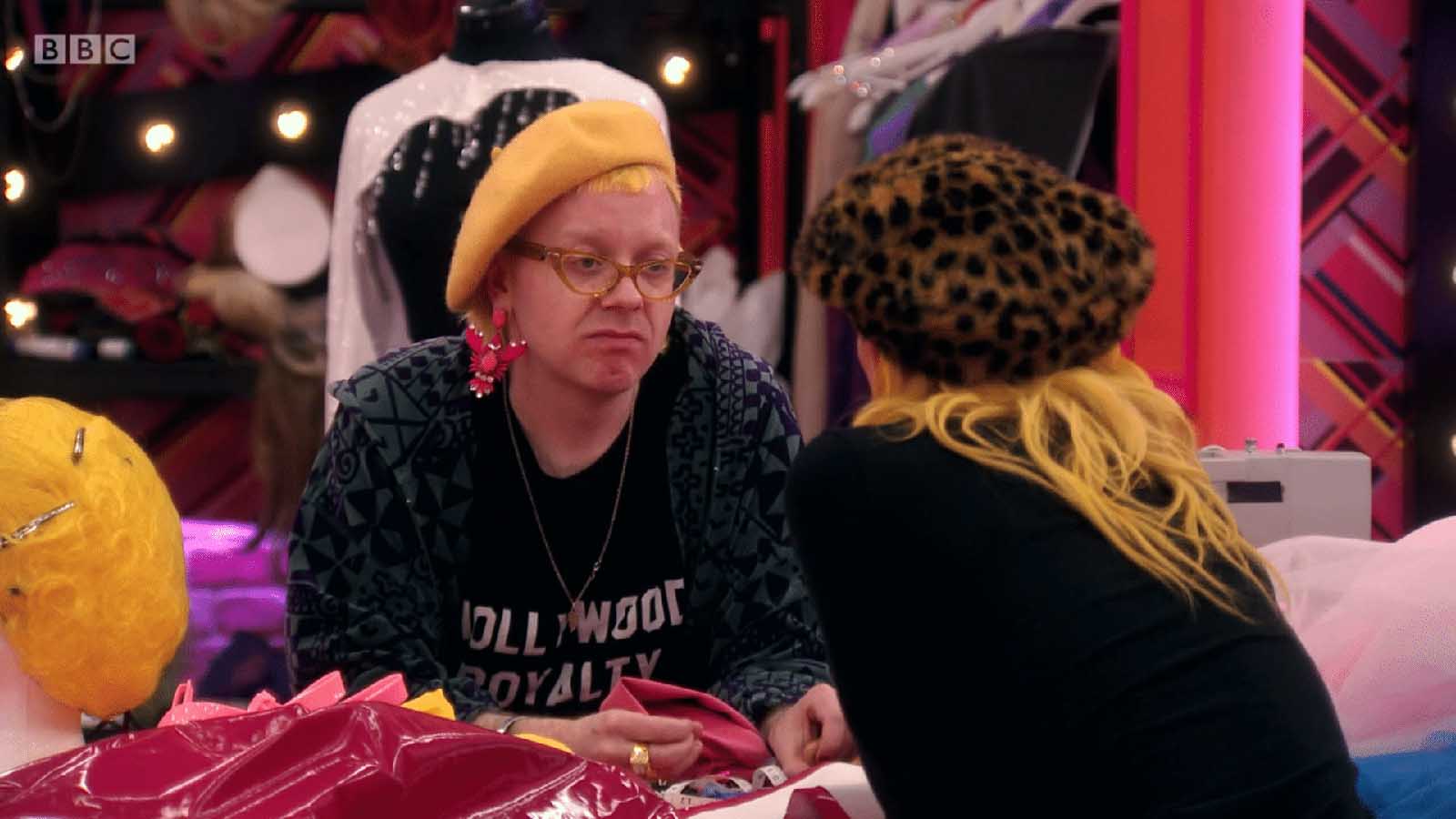 One of the most emotional moments of the season so far is your talk with Bimini Bon-Boulash about your gender identity. Did you think your conversation would get such a warm reaction?

Absolutely not. I’m completely flabbergasted and at a loss for words at the reaction that conversation has had on people. I was very much just a vulnerable human having a conversation with a human at the time.

Watching it back and seeing myself so raw is so difficult to see. But seeing the words that come out and people connecting with it and hearing the amazing connection that it’s had with people, it’s truly amazing and I feel truly lost to words really.

How does it feel knowing you’re a role model now to so many non-binary people who watched your conversation?

Well, I definitely never set out to be a role model. I try to be an absolute clown. But now I realize I have this voice as people were so taken by that conversation. I think the wisest thing that I can do now is to use my voice and to keep talking about gender, keep talking about non-binary gender identities and things like that.

I’ve got to do it because I was once that person without a voice and if I was to do that now, it would go against everything I believe in. So now is the time to use that voice and to stand up.

Hiya just a reminder to a The University of Worcester do not to tag me in ANY POST. Please do not use my “success” to promo your lies about inclusivity. If anyone see this again plz let me know. Xoxo https://t.co/HeJHA5pyOm

You’ve been using your voice to voice your disdain with the University of Worcester and your treatment while working there. Can you fill us in on the situation for those unfamiliar?

I worked for them a couple of years ago. I was also a student with them. I had a horrible time with homophobic bullying. At the time, it got so bad that I had to go through an internal investigation. It was also so bad I ended up in therapy. I was forced out of my job basically.

The investigation was seen as no evidence, because it was conducted internally by friends that had worked together for a very long time. So I was very disappointed after having such a horrible experience there, for them to be using my image to promote them being inclusive.

That has not been my experience so my umbrage I take t0 them is the fact that they are using my image to celebrate diversity when in fact they did not celebrate me or do anything really to accommodate me and I was just hounded out. It’s just shocking & sad.  I didn’t want to make this into a big controversial issue. What I would love from this is just for them to recognize what they’ve done, and to ensure that it doesn’t happen again. 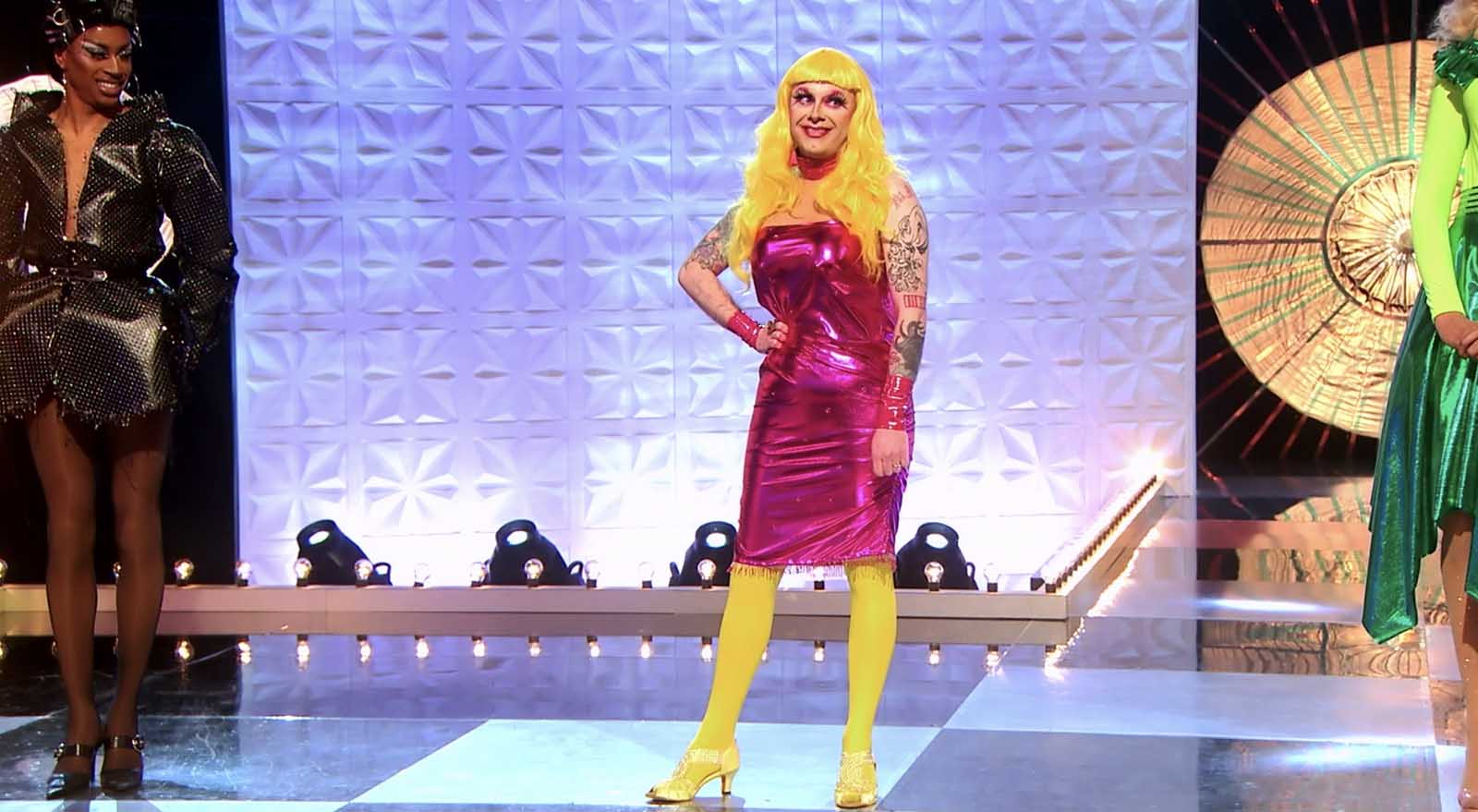 A big part of your arc on the show was stepping out of your comfort zone and trying more “conventionally attractive” styles. In your mind, what was it like trying to explore yourself as a drag artist?

Oh, you know, essentially drag is just a great big opportunity to dress up and have fun. That’s how I see it. And for me, it has always been a challenge because of how I see Ginny. I wear yellow because it’s a non-binary color it is absolutely genderless. So to be donning a great big pair of huge, massive tits is kind of, you know, putting me into a category I didn’t want to be in.

Also, like, you don’t have to have big hips to be sexy I feel sexy just as I am. I just didn’t necessarily think that Ginny was sexy, but it has helped me explore a side of my personality. And to kind of accept more sensuality into my life. 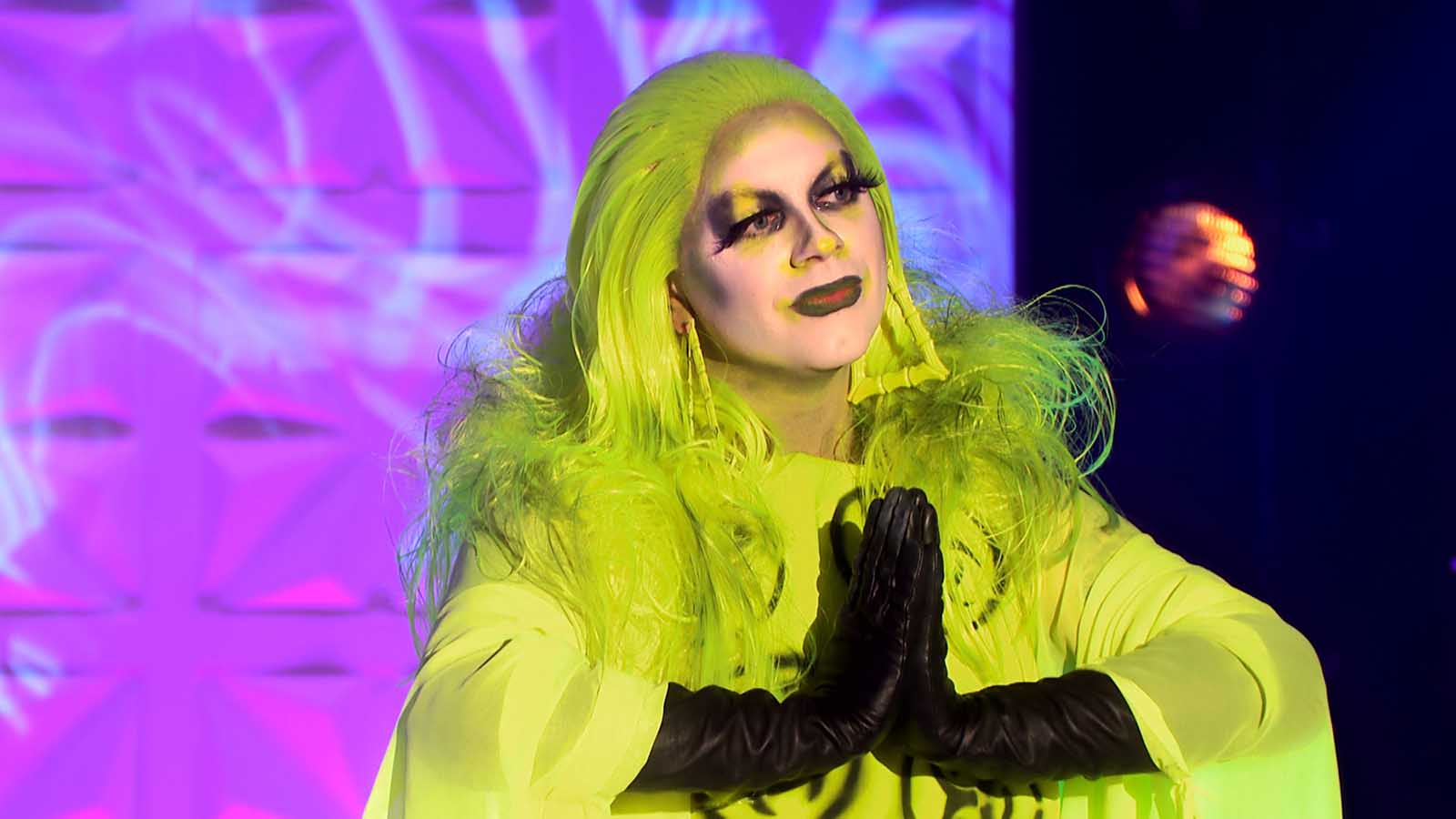 We have to talk about last night. When was the moment you knew you were going to walk off and eliminate yourself?

I think the moment I knew was the moment that Ru said I was in the bottom two. That’s the moment I knew I was going to do it. So you can see that cheeky grin on my face; I couldn’t hide it. And I thought, “Ginny is outta here! Later! I need to lie down and have a cup of tea.” But, I mean, I just want to say that RuPaul has never said to Ginny to sashay away, so technically I’m still in the game.

Obviously, only one other queen in Drag Race herstory has ever pulled a self-elimination. How do you feel knowing this is where your Drag Race UK legacy will remain?

It is fabulous and I think that if anybody is in an environment that they no longer want to be in anymore, then they should do a Ginny Lemon, and just go home. 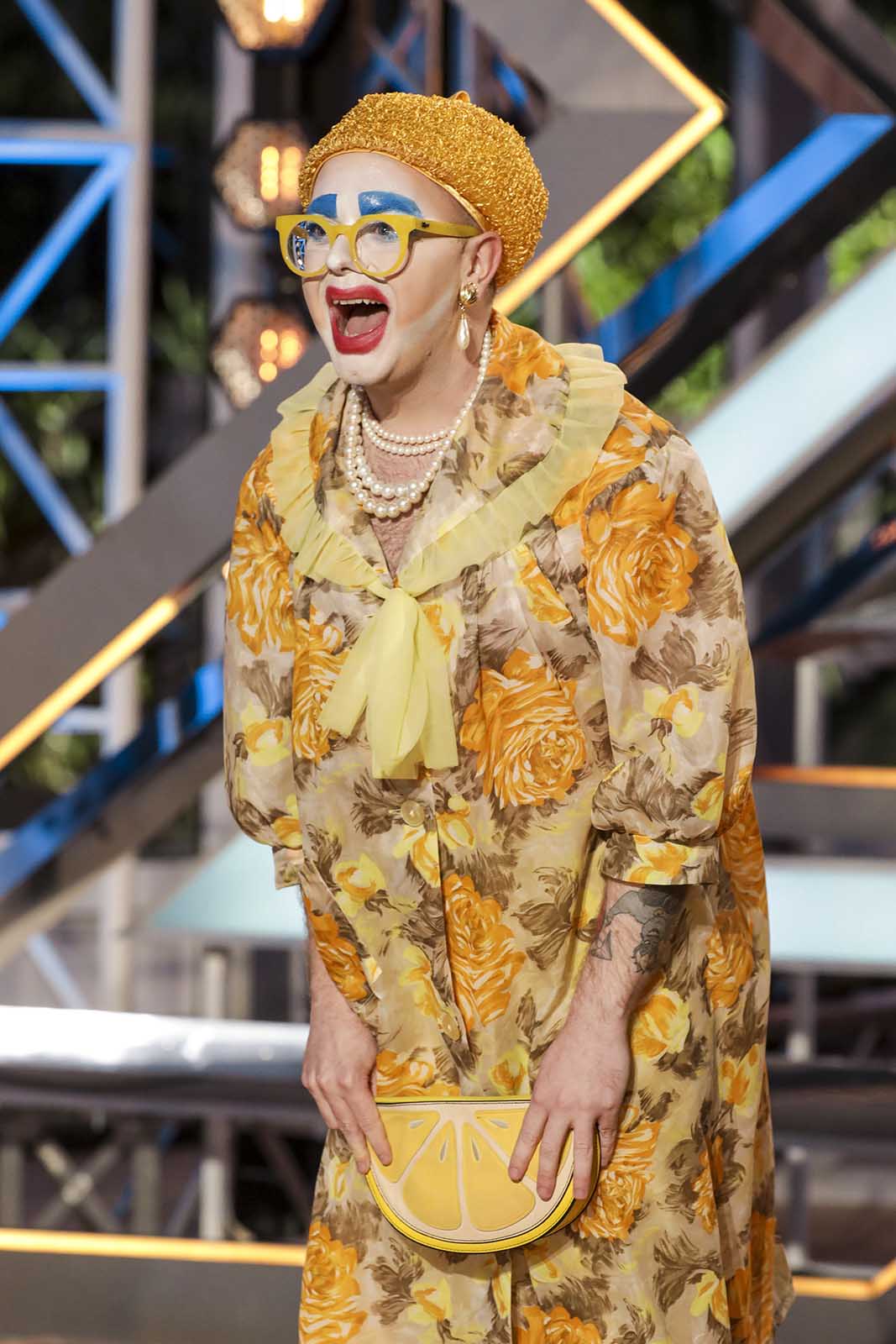 Do you regret any part of your time on Drag Race UK?

Where can the fans see you next?

I’m doing a show tonight and you can get tickets through Klub Kids UK. It’s going to be a one woman show, at home here in the Ginny Theater. Obviously COVID safe and all that et cetera. I’ve got some fabulous guests, I’m so excited, I’m going to be debuting a brand new hit single that just dropped last night and doing a few other little songs and bits and bobs and spilling a bit of tea. Who knows what will happen?

You could always expect the unexpected for one of my shows, that’s for sure. You can also find me on Instagram, Twitter, Facebook, it’s all Ginnylemon69. Just look it up just Google me. I’m very famous now so just Google me.