Hulu’s ‘Veronica Mars’ revival is exactly what the world needs

It’s time to pull that leather jacket, studded bag, and taser out of storage fellow Marshmallows, because that revival series we’ve all been dreaming about since forever is finally here. The insanely exciting continuation of Rob Thomas’s Veronica Mars on Hulu is airing now starring the fantastic Kristen Bell.

This is what happens when fans refuse to give up

It’s been a twelve long years since The CW originally axed the cult drama about the diminutive but powerful teen detective and fans have been desperately waiting for some sign that the story could be continued after only three seasons. There was such eagerness to see more from the incredibly charming titular character and her bevy of equally charming friends that fans leapt into action to help fundraise the development of a movie when Bell and Thomas launched a Kickstarter campaign for it in 2013.

The campaign broke the record for the most backers on a single Kickstarter project and also highlighted a fact that many TV fandoms have come to depend on in recent years: Fans have the power to bring their favorite shows back from the dead.

The resulting movie isn’t just an astonishing achievement that proves the power of fandoms – it’s also a phenomenal standalone movie, one that did right by the fans as a revival narrative, but that also provides a vastly entertaining mystery full of wit and intrigue.

The quality and extensive stretch of the narrative also underlines something that fans have known ever since the show was cancelled in 2007: That Veronica Mars didn’t deserve be tossed in the trash like a Vinnie Van Lowe (Ken Marino) business card.

The development (and abandonment) of Veronica Mars: FBI years

As superfans of the show, we’re not too proud to admit that S3 had its problems. It lacked the same masterful plotting of the first two seasons, the central mysteries weren’t as well developed, and dear lawd those shaven head wigs were an abomination. But that’s more a reflection of just how wonderful the first two seasons were. They were near flawless productions. Everything from the cast, the writing, the quips, and the twists were all as close to perfection as a show can get.

That’s a hard thing to maintain. S3 wasn’t as great, but it wasn’t objectively bad by any means and The CW should have at least invested in a fourth season to see where the narrative would go next. By now of course we know what direction the show was heading in – and it was a good one. The trailer presentation of Thomas’s proposed fourth season was to follow Veronica as a young FBI special agent. The twelve minutes’ worth of footage from the pilot available online proves the immense potential of this season.

Veronica is still playing the Columbo card in utilizing peoples’ underwhelming expectations of her as a tiny, pretty blonde girl to trick them into situations where she can take them down (most notably, a reform school principal who has been sexually abusing vulnerable students). And she’s also still just as caustic and quick-witted as ever and she’s still getting herself involved in messy relationships with guys she can’t help but be drawn to (but should know better about pursuing).

But there’s a difference to how the character is depicted in Veronica Mars: FBI Years to how she was in some of S3’s weaker moments – she’s finally been given an opportunity to fully realize her brilliance. Even if she is still having to prove herself within yet another male dominated, highly privileged world.

It’s infuriating to imagine The CW watching this footage and choosing to hit a hard pass on the entire premise before fans even had a chance to make up their own minds about whether they loved it or not. (And let’s face it, they probably would have. We’re still here talking about it today, aren’t we?) This thing even had Walton Goggins in it! It had so much unrealized potential, we could scream just thinking about it.

The movie gave us a taste for more

Terrific though that season would have undoubtedly been, we’re also more than happy with the fresh direction taken in the revival movie that chose to rewrite the whole “Veronica is an FBI agent” angle. Instead, the character was crafted as having pursued a law career after S3, hoping to land her first major job (with none other than Jamie Lee Curtis) while struggling to quit the siren call of Neptune – and all of its salacious, seedy drama.

It was the perfect re-introduction to the character, one that highlighted how much she’d grown but also how little. It also gave us sharp glimpses into every beloved character that hinted at something much bigger worth pursuing within the Veronica Mars world. Keith (Enrico) is a grizzled private detective still fighting the corrupt Neptune police department, Wallace (Percy Daggs III) is a teacher at Neptune High, Eli Navarro (Francis Capra) has tried to go straight to raise a family.

Mac (Tina Majorino) has sold her soul to the devil and is working for Kane Software, and Dick (Ryan Hansen) is using marijuana for his “depression” and still partying like a king. Perhaps most intriguing of all of them is the development of (swoon!) former bad boy Logan Echolls, now a Naval man (uniform and all) who may have finally allowed for his good side to shine brighter than his dark one.

Every character (including poor old Chris Lowell’s Piz) hinted at new growth and complexity within the overall narrative that we didn’t get to see enough of in the movie – perfect though it is. Through various interactions and clashes with the town’s figures of authority and elite community, it’s also clear that Neptune hasn’t gotten any better since last we saw it – in fact, it may be even worse now than it ever was.

“Annoy, tiny blonde one! Annoy like the wind!”: Why Veronica is a hero we need right now

Veronica Mars is exactly what today’s zeitgeist demands. Throughout S1 to S3, the show had plenty to say regarding class division, racial profiling, police brutality, and of often powerful men using their privilege to sexually abuse young women and men.

You could even argue that Neptune is a microcosm of various systemic US injustices and sociopolitical conflicts. It’s a town that reflects the ghoulish flip side of seemingly flawless Hollywood glamor and perfection while also platforming the heart of lower class communities and communities of color.

In an era so defined by movements like #MeToo and Black Lives Matter, where it’s more important than ever to be loud about injustice (and to film such injustice and to share it as Keith attempts in the movie), we need Veronica’s relentless savvy and tenacity in refusing to stay silent or to accept the things authorities think she cannot change. 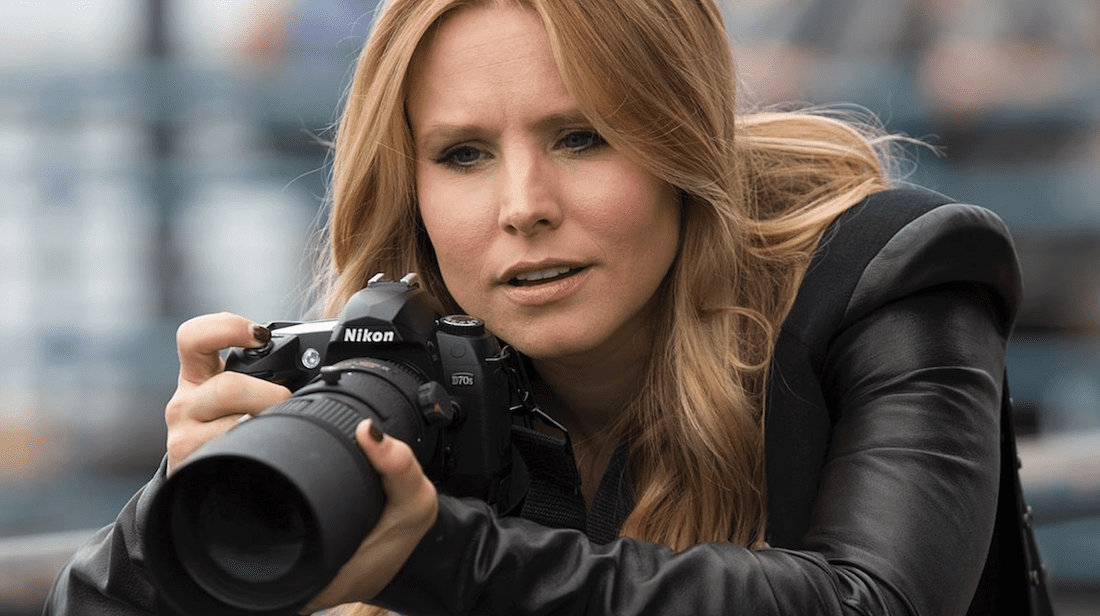 Another season of Veronica Mars delves us deeper into the soiled sandbox of Neptune’s various corrupt and oppressive systems while giving us a larger glimpse at how she and her loved ones have grown in the past decade. It’s an opportunity to see Veronica fully realizing her brilliance but on her own terms – and all for the town she desperately wanted to leave but secretly wants to save.

As she muses at the end of the movie: “I convinced myself that winning meant getting out. But in what world do you get to leave the ring and declare victory?” We’re more than ready to see our girl re-enter the ring and who knows – maybe this time she’ll be victorious against every a**hole that makes the mistake of getting in her way.