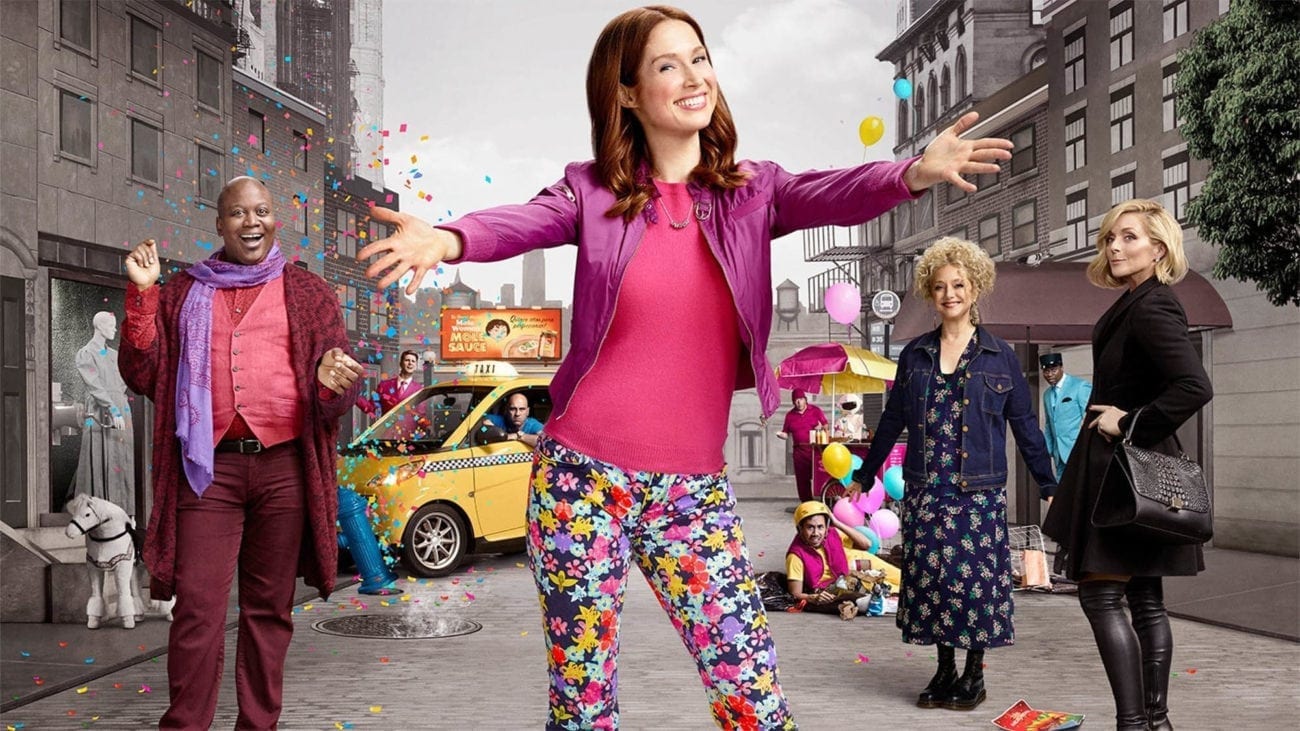 2018 was a sad year for peak TV. We lost some of our favorites: The Americans, Shadowhunters, Timeless, Colony, Halt and Catch Fire, and more. 2019 isn’t really treating us any more kindly: some of our lighter-hearted faves such as One Day at a Time and Unbreakable Kimmy Schmidt are streaming for a final time over at Netflix.

We’ve known for a while that S4 of Kimmy would be the last for the fantastical tale of a girl looking for community after being a victim of trauma. That knowledge doesn’t make the loss any more palatable, so with a couple of months’ closure behind us, we’re finally ready to celebrate the greatness that was Unbreakable Kimmy Schmidt.

Here’s our ode to the strong-as-hell women who inhabited the show and changed our lives forever. 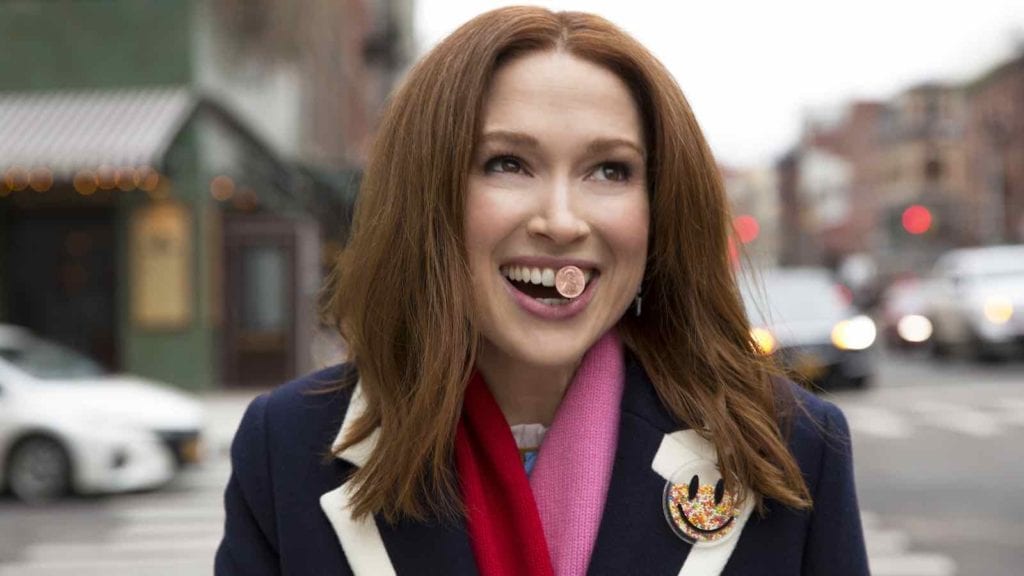 If you’ve ever gone through a hard time, you’ll know there’s power in laughter and resilience in joy. In Unbreakable Kimmy Schmidt that idea is propped up on a gold pedestal, given an artillery of cartoonish props, and engraved with one infallible slogan: “Females are strong as hell”.

As featured in the opening credits theme of the Netflix Originals comedy series, the phrase has become a mantra for women looking for a simple, tongue-in-cheek way to express their enduring resilience and also describes the tough female characters at the heart of the show.

Having been trapped and abused in an underground bunker for almost 20 years by the Reverend Richard Wayne Gary Wayne (Jon Hamm), Kimmy’s (Ellie Kemper) return to the world and subsequent sunny disposition in the face of her harrowing psychological trauma is obviously the boldest expression of this idea. 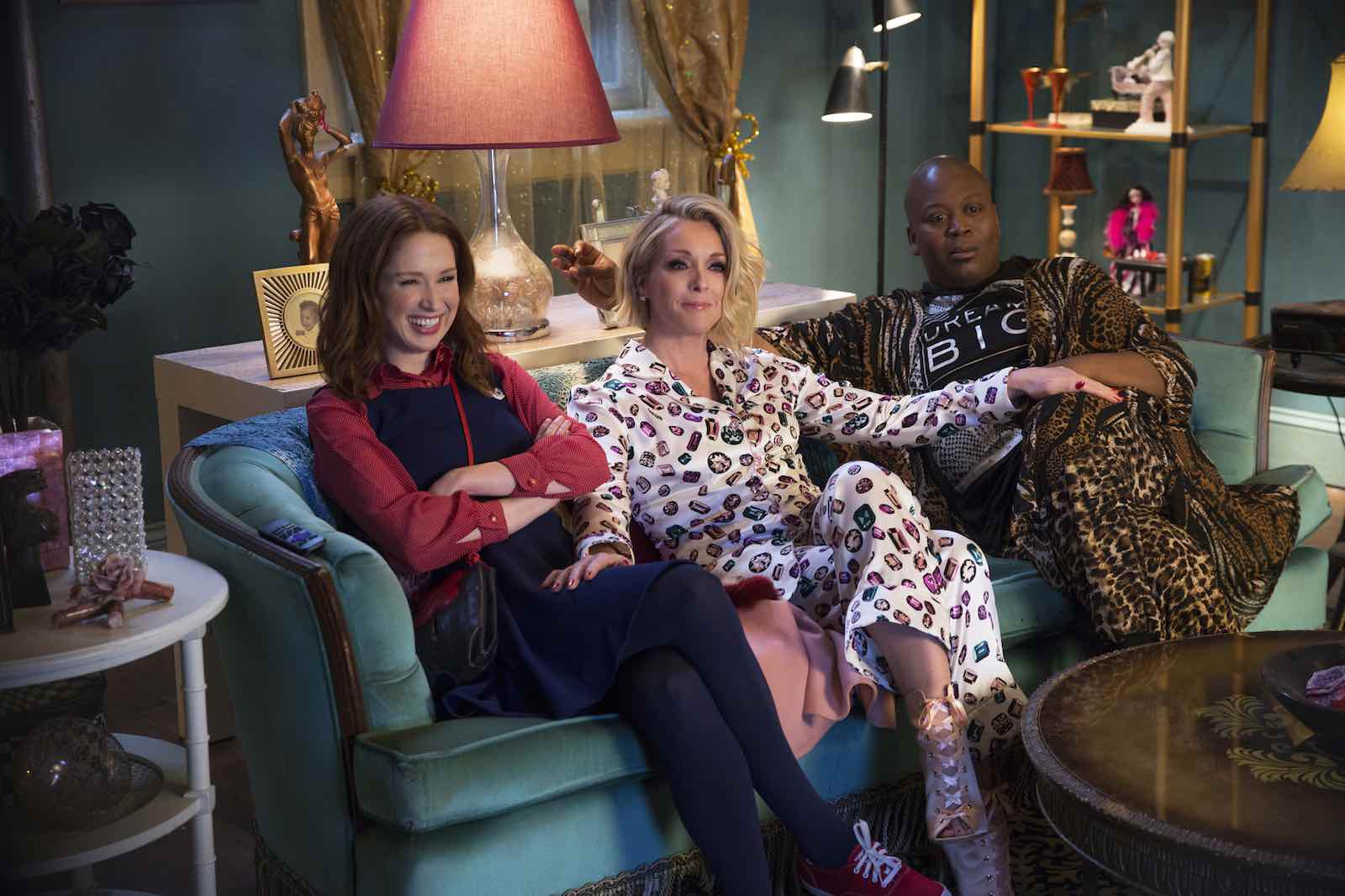 The character is almost cartoonish with her relentless approach to dealing with her trauma, including practising what she calls “Kimmying” – smiling until she feels better. It’s obvious to the audience that this is where Kimmy draws her strength we could even go as far to suggest this is how she continued to survive, providing a bold commentary on the therapeutic nature of comedy.

Kimmy’s relentless optimism and decision to smile through the pain of life is also a shrewd play on the timely idea that women have long been putting up with a lot of shit (hello Hollywood!) and been encouraged by society to simply grin and bear it.

However, Kimmy inverses this idea and makes it an empowering one. Her unbridled bright facade isn’t just for show – it’s the thing that gives her momentum and more importantly, some armour in her pursuit for a new life. 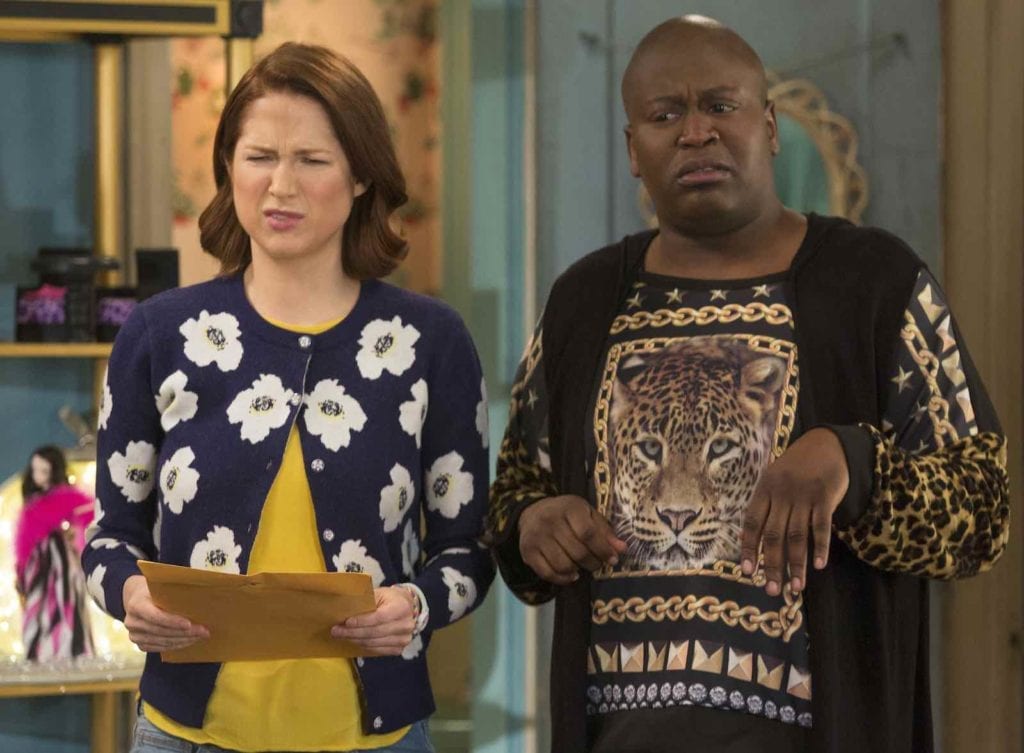 As a result, Kimmy’s inner strength manifests in physical and often comical ways including the time she successfully battled two people at once while hopped up on anesthesia and when she protected the other “molewomen” from the SWAT team who broke down the door of the bunker. Kimmy is basically the Jessica Jones (Krysten Ritter) of comedy.

But Kimmy isn’t the only strong, resilient female character of the show. Lillian (Carol Kane) superficially appears to be little more than an oddball neighbor but is actually impressively tough and powerful in her devotion to defending her New York neighborhood from gentrification.

In S2, she handcuffs herself to construction equipment in protest of the arrival of local hipsters who she determines will hike up the rent of the area and drive out the original residents. Meanwhile S3 sees Lillian becoming a city councilwoman to combat the encroachment of “yuppies” onto her turf, even attempting a ludicrous (and ultimately failed) filibuster in an attempt to maintain control over her local area. 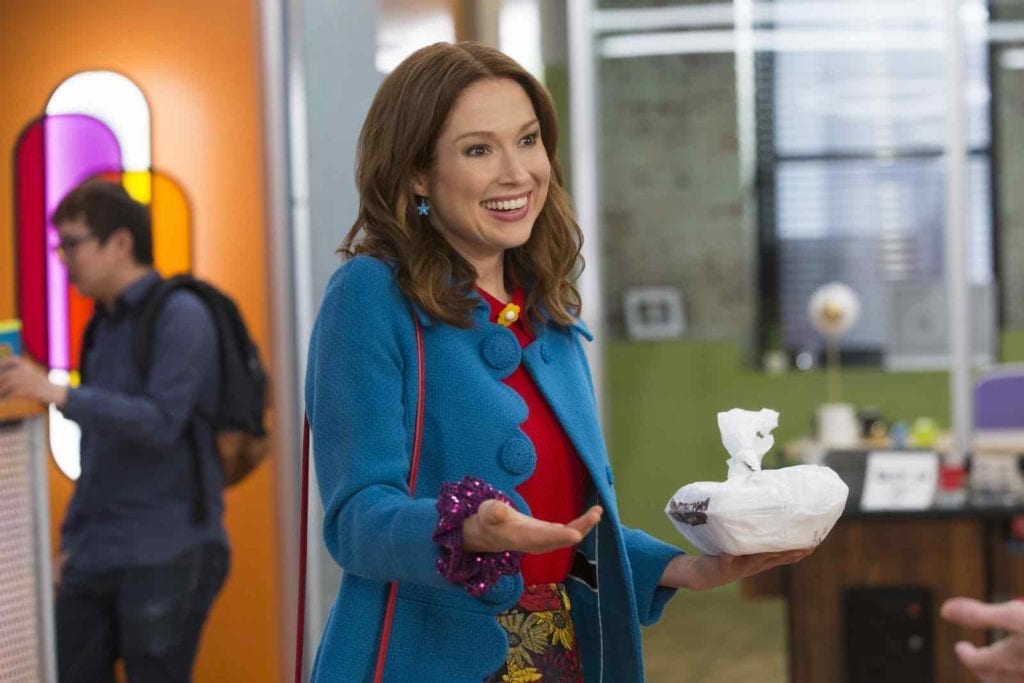 At the complete opposite end of the strong female character spectrum is Jacqueline (Jane Krakowski) – one of those heinous yuppies Lillian is so against – and her deadpan daughter Xanthippe (Dylan Gelula).

Though Unbreakable Kimmy Schmidt has faced criticism (such as from Vulture) in its depiction of Jacqueline as a Native American woman who has deliberately whitewashed herself as a caucasian American – while Vice argued the show is making an irreverent commentary on whitewashing in doing so – the character offers a hilarious portrait of a privileged woman finding strength in wealth.

However, as the seasons have progressed, it’s become more evident that Jacqueline is more than her bank account and boundless designer wardrobe as she takes on structural racism against Native Americans and repeatedly finds strength in using her privilege as a platform to help and defend others. 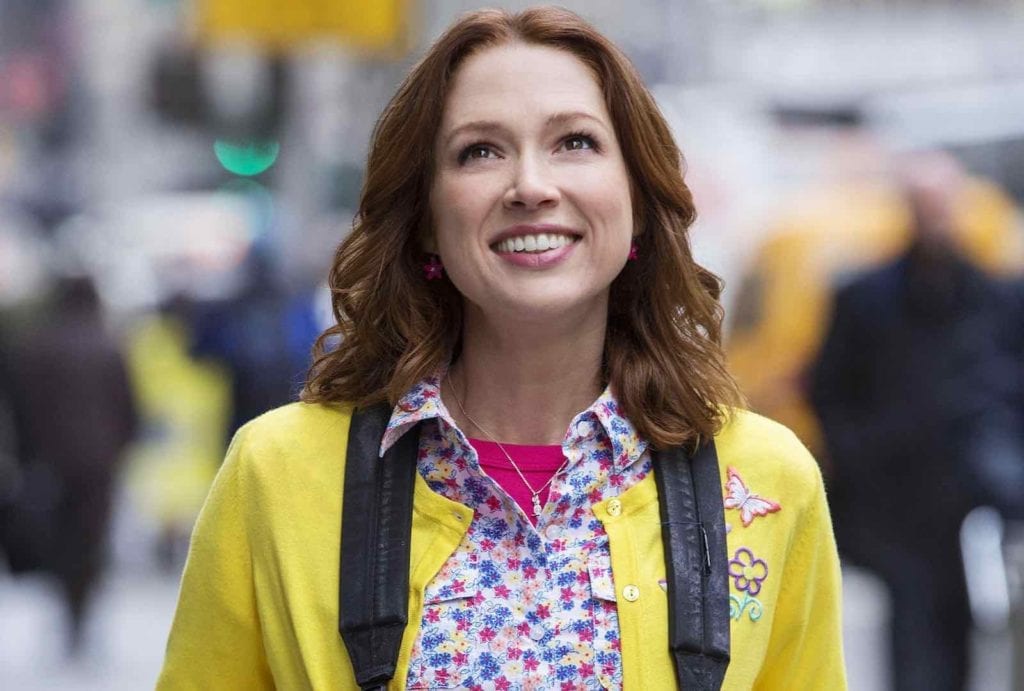 Like her daughter, she’s also admirably outspoken and unafraid to spitball her opinion against a crowd of bros. For example, in S4 she helps Xan get revenge on her ex-boyfriend for slut-shaming her to his pals, hilariously proclaiming in front of a room full of college boys, “If you think you’re more important because you can pee standing up and drive a car in Saudi Arabia, don’t believe it!”

Understandably, Xan also takes after her mom in this respect and is joyously outspoken throughout the show, lending her snarky, snarling wit to every scene she appears in. Unsurprisingly, Xanthippe’s name is actually derived from Greek mythology, sharing her name with the wife of Socrates and making it a classical byword for a harsh and difficult woman. In Unbreakable Kimmy Schmidt such an attitude is celebrated.

If Kimmy uses her radiant sense of optimism as her own personal armour for life, Xan uses her peerless pessimism and acerbic perspective as hers. However, in S3 and S4 we’ve seen how Xan’s attitude ultimately fails her in college where her female roommates have a significantly different approach to what being a strong woman entails, leaving Xan feeling ultimately vulnerable and left out.

With the assistance of Kimmy, Xan learns that you can still be a strong woman even if your defences are down and you choose happiness and optimism over steely wits and cynicism.

It could be argued that’s the overriding message of Unbreakable Kimmy Schmidt as it explores some serious and sadly relatable issues in the silliest and most refreshingly witty manners possible. The show remolds what it means to be a strong woman and explores the myriad of ways this can be expressed and achieved.

With its strong female characters, Unbreakable Kimmy Schmidt offers a reminder of the power of laughter, the tenacity of happiness in the face of hardship, and why enduring the world with moxie and grit is something strong as hell women have to do to make it through. It doesn’t mean we can’t achieve that with a shining temperament and knowing grin while eating candy for dinner at the end of it all.