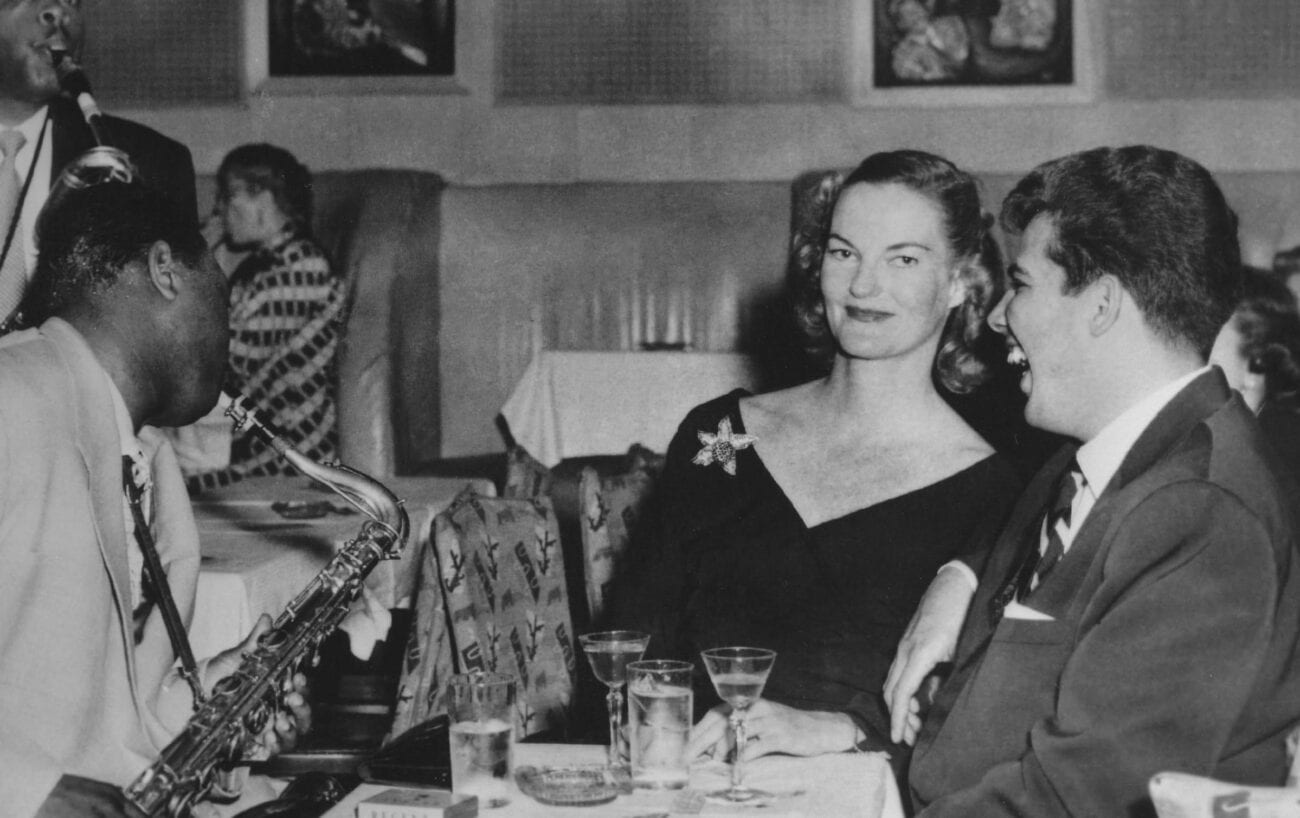 Can money solve anything? How Doris Duke got away with murder

Doris Duke – odds are her name isn’t familiar to you unless you live somewhere near Rhode Island. Doris Duke was a wealthy heiress who had many houses, including one in Newport, Rhode Island – her home was on Bellevue Avenue, also known as Millionaire Row.

Duke, while being known for inheriting shocking amounts of money, was also known for having a bad temper and a long string of men in her life. From Marlon Brando to General George Patton her list of ex-lovers was rather impressive. Her interior designer Eduardo (Eddie) Tirella was not one of her lovers, he was gay – though he was rather close with Doris Duke.

Duke had worked with Tirella on her estates in Honolulu, New Jersey, Bel Air, and of course her Newport home in Rhode Island. However, one fateful evening Tirella lost his life. 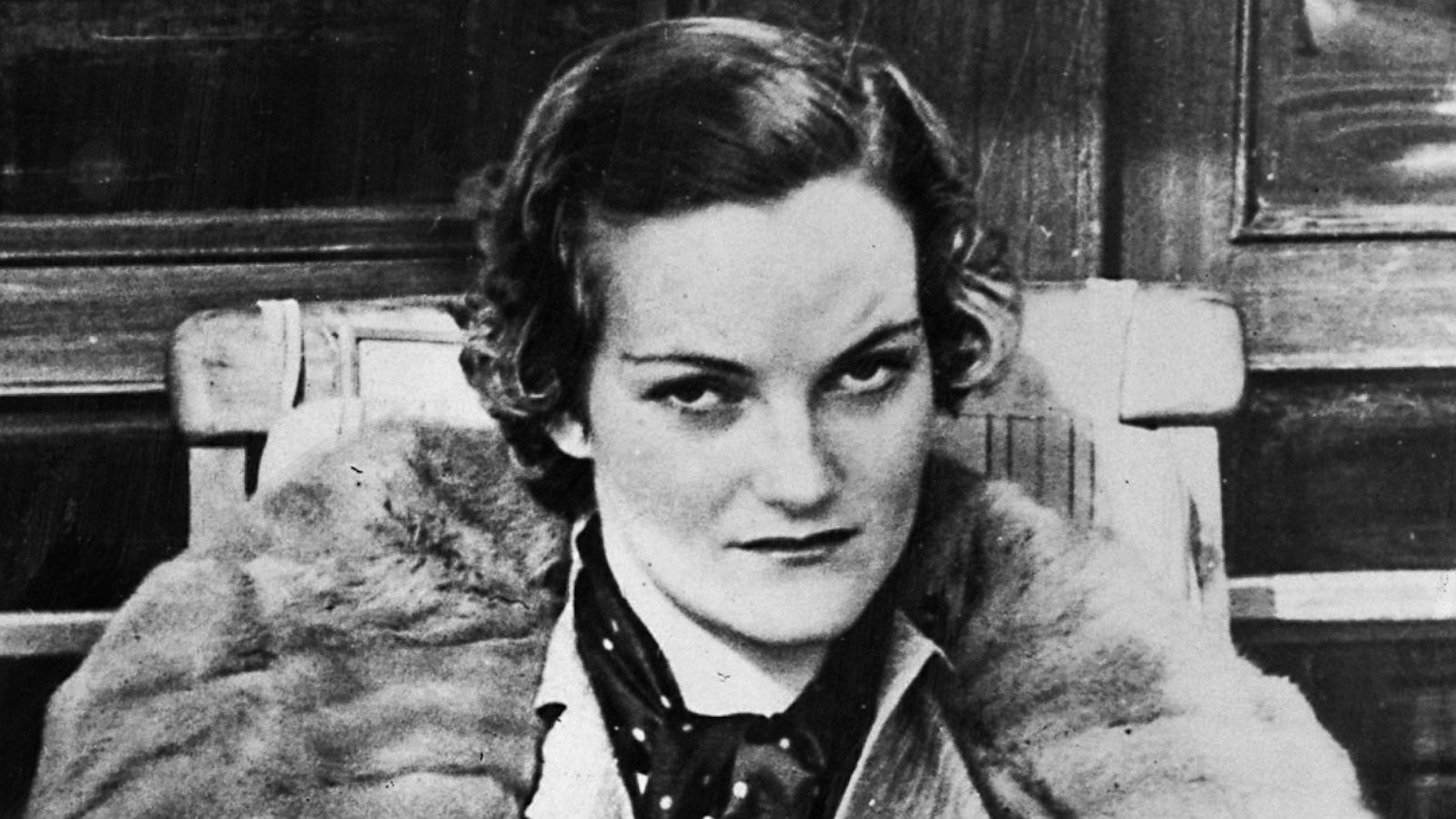 Leading up to the event

The date was October the 6th in 1966. Tirella had just recently finished working as an advisor on a movie called Don’t Make Waves – advice he probably should have heeded. Tirella had shared plans with his loved ones stating he was planning to move to California permanently in order to focus on his Hollywood career.

The purpose of his trip in October of 1966 was to inform Doris Duke of his decision. When he told his friends and lover of these plans they all warned him Duke wasn’t someone to cross and it was possible she would get violent.

They knew this because she had once stabbed a man with a butcher knife when he had upset her. While not officially married to this man, he was her common-law husband. 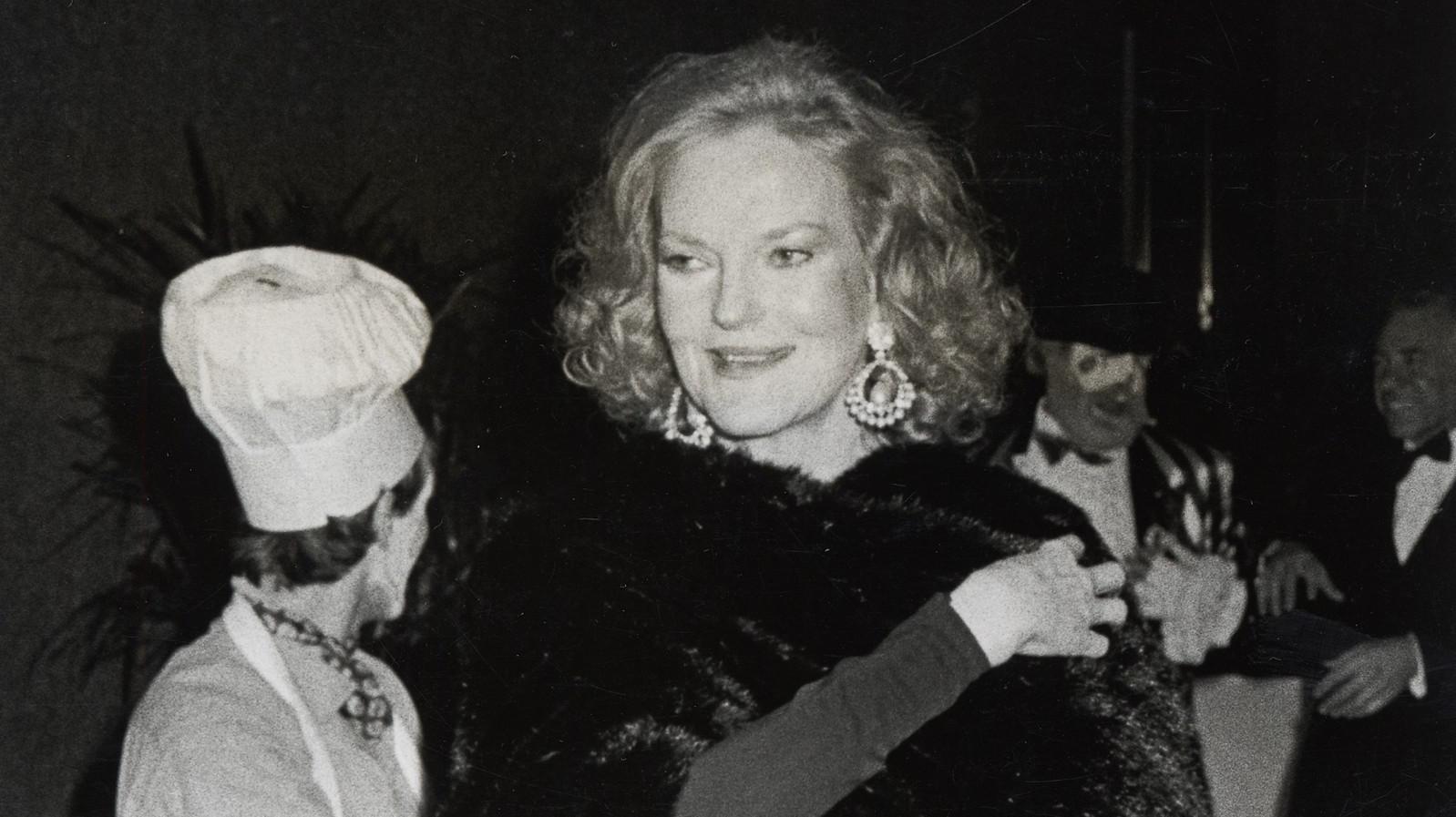 In the afternoon, a day after Tirella’s arrival to Duke’s estate, staff heard the two get into a loud argument. However, it seemed to blow over, since shortly after the verbal skirmish the two got into Tirella’s car and left.

Doris Duke’s estate has a large gate at the end of her long driveway, a rather stereotypical feature to a millionaire’s home. This meant Tirella, the driver of the vehicle had to step out of the car to unchain the gate before driving through.

Duke then slid into the driver’s seat, released the brake, put the car in drive, and slammed the gas pedal. The vehicle not only slammed into Eddie Tirella, it barreled through the gate, into a fence across the street, and ended up crashing into a tree. Tirella was still stuck beneath the vehicle. 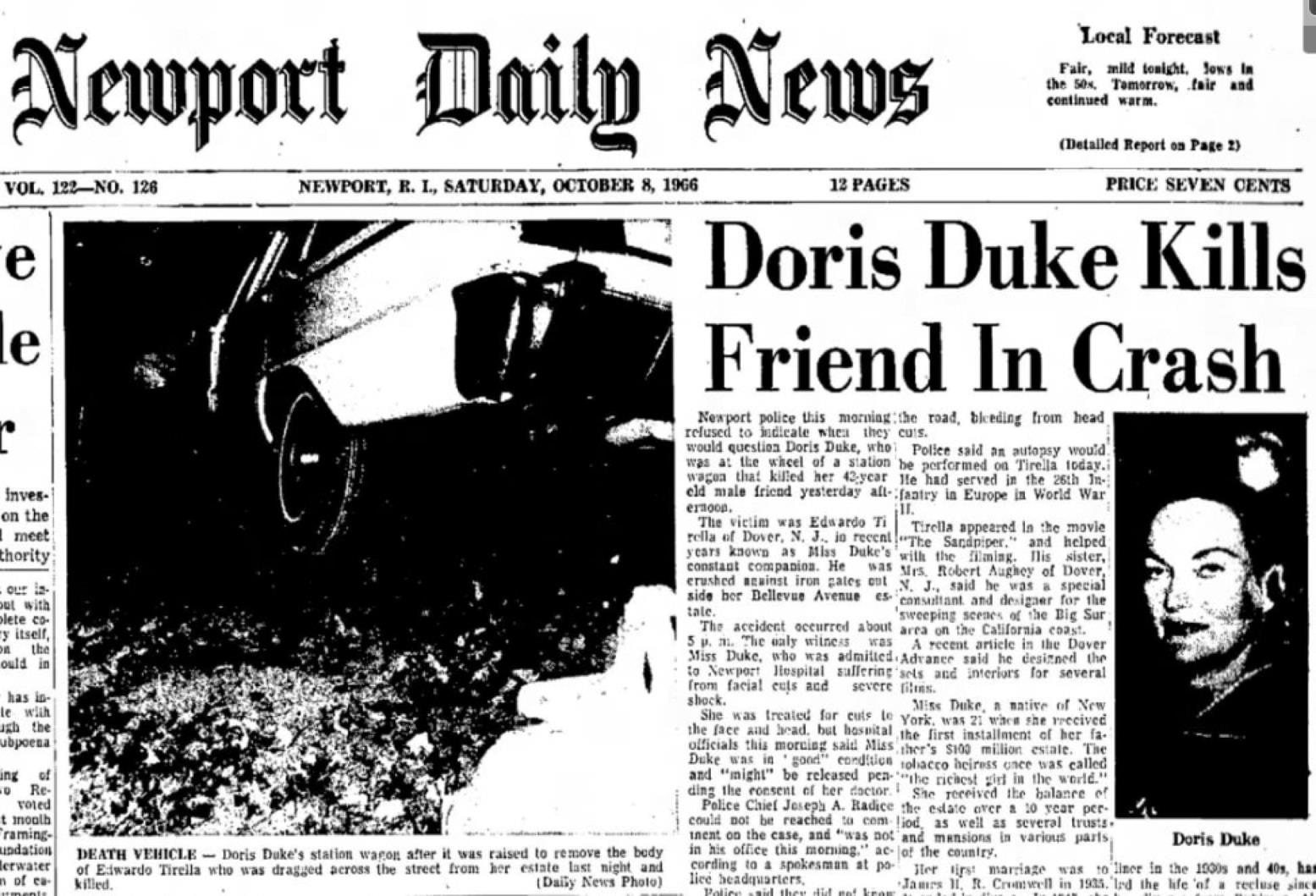 Just four days after the incident police declared the event an “unfortunate accident” – as if parked cars sometimes launch themselves forward at full speed after being in a full stop. Tirella was hit with so much force he was killed instantly due to damage to his spinal cord, lungs, and brain. A roll-away car with faulty brakes, this was not.

Barely over a week later Doris Duke donated $25,000 to restore a place called Cliff Walk, and another $10,000 to the hospital she stayed at after the car “accident”. A little later she also began the Newport Restoration foundation which would renovate old buildings to their former glory.

What became truly suspicious though was the sudden retirement of the inspector who had questioned Duke. Seven months after the investigation he moved to Florida, buying not one, but two condos. A number of other officers who worked on the case and spoke with Doris Duke also found themselves getting impressive promotions that were far larger than their experience made them qualified for. 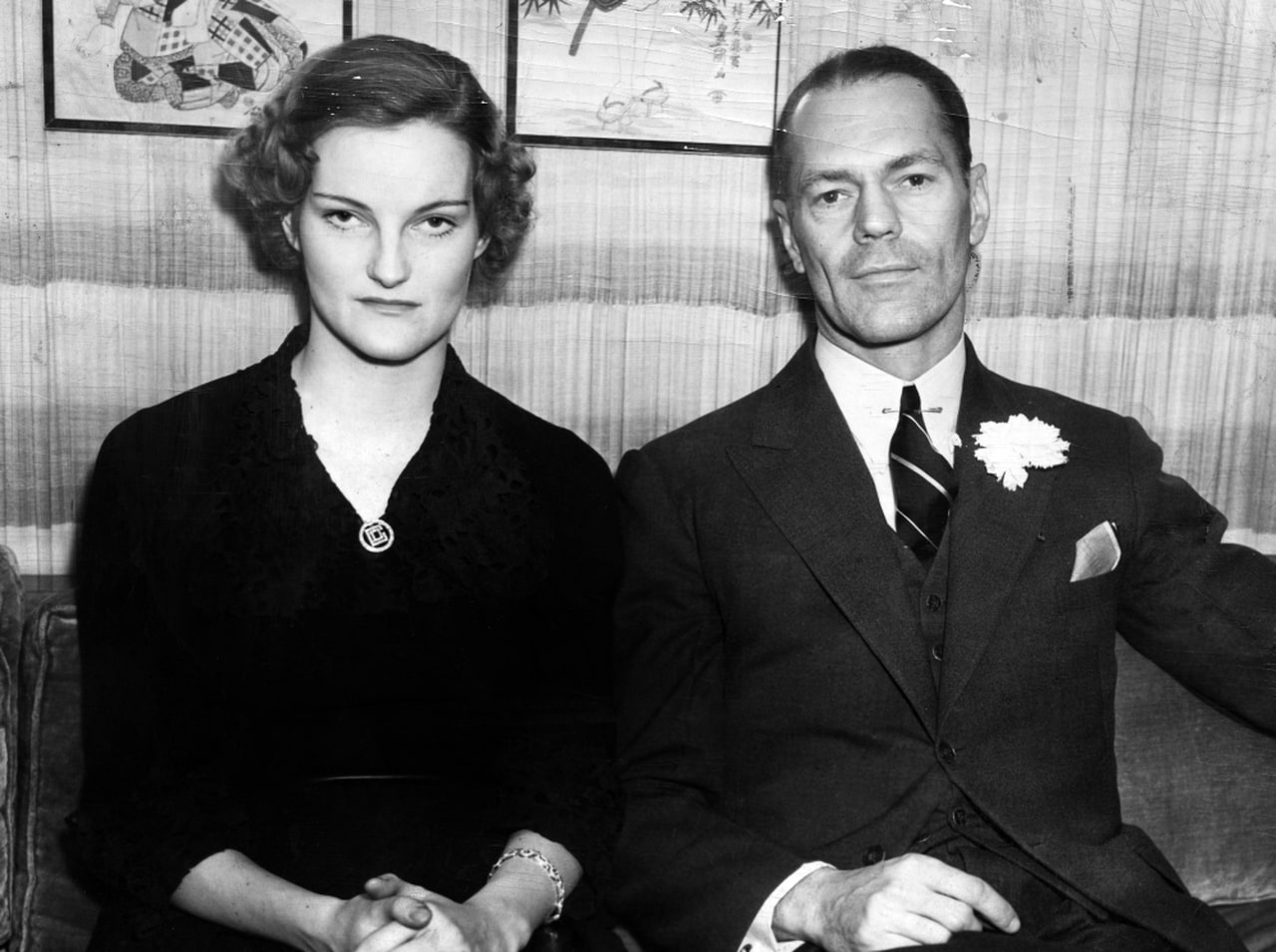 Eddie Tirella’s family sued Duke five years after his death for wrongful death. They originally wanted $200,000 in damages. While that sounds like a hefty sum, Duke was making $1 million a week in interest on her fortune alone.

Five years after the death of Tirella Doris Duke would be found negligent, however she ended up paying each of Tirella’s eight siblings a mere $5,260 each.