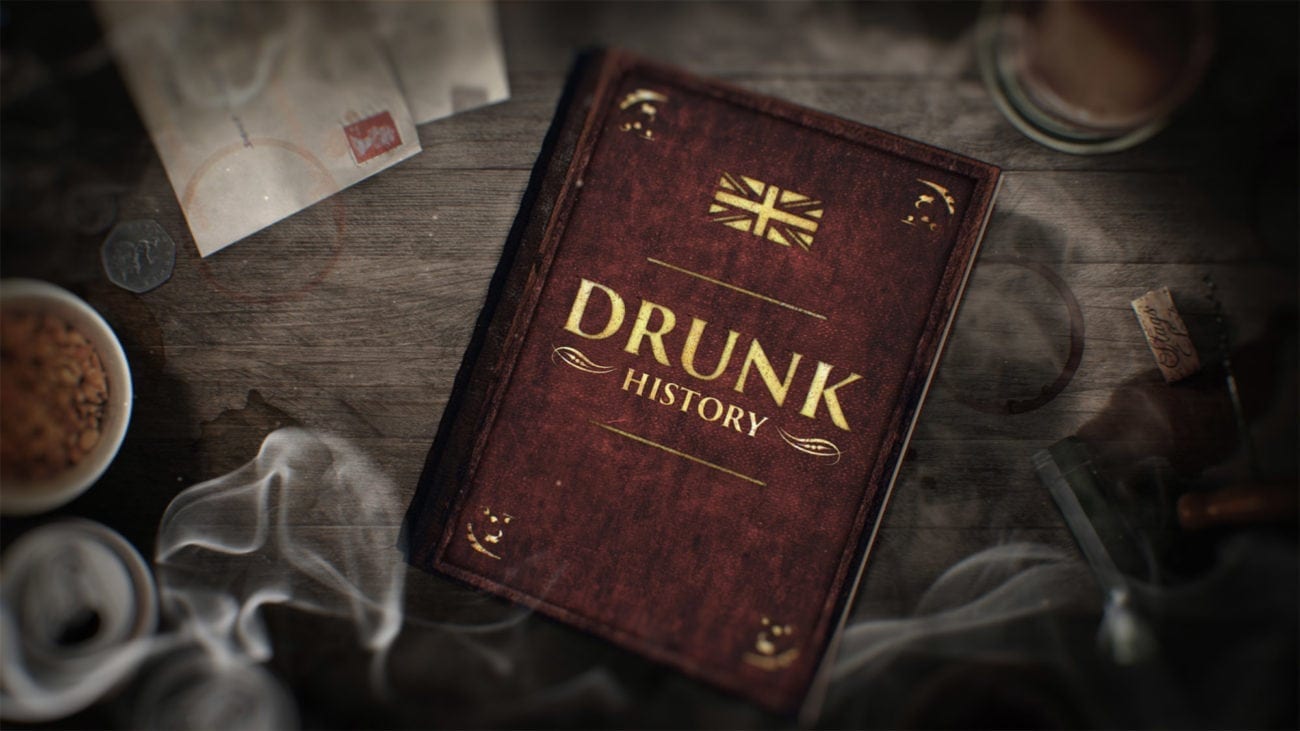 S6 of Drunk History graced our Comedy Central screens earlier this year. To celebrate, we’re ranking some of the best moments of the historical comedy show.

S5 featured some spectacular episodes, including “Questlove on the Birth of Hip Hop”, “Kyle Mooney on D.B. Cooper”, and “Georgia Hardstark on the Circleville Letters”, with the usual selection of high-profile stars like Kirsten Dunst (Fargo), Colin Hanks (King Kong), Abbi Jacobson (Broad City), and Amber Tamblyn (127 Hours) stepping up to bring life to such drunken retellings.

To help get you in the suitable mood for the return of TV’s sloppiest yet insightful show, here’s our ranking of the ten best episodes of Drunk History so far. 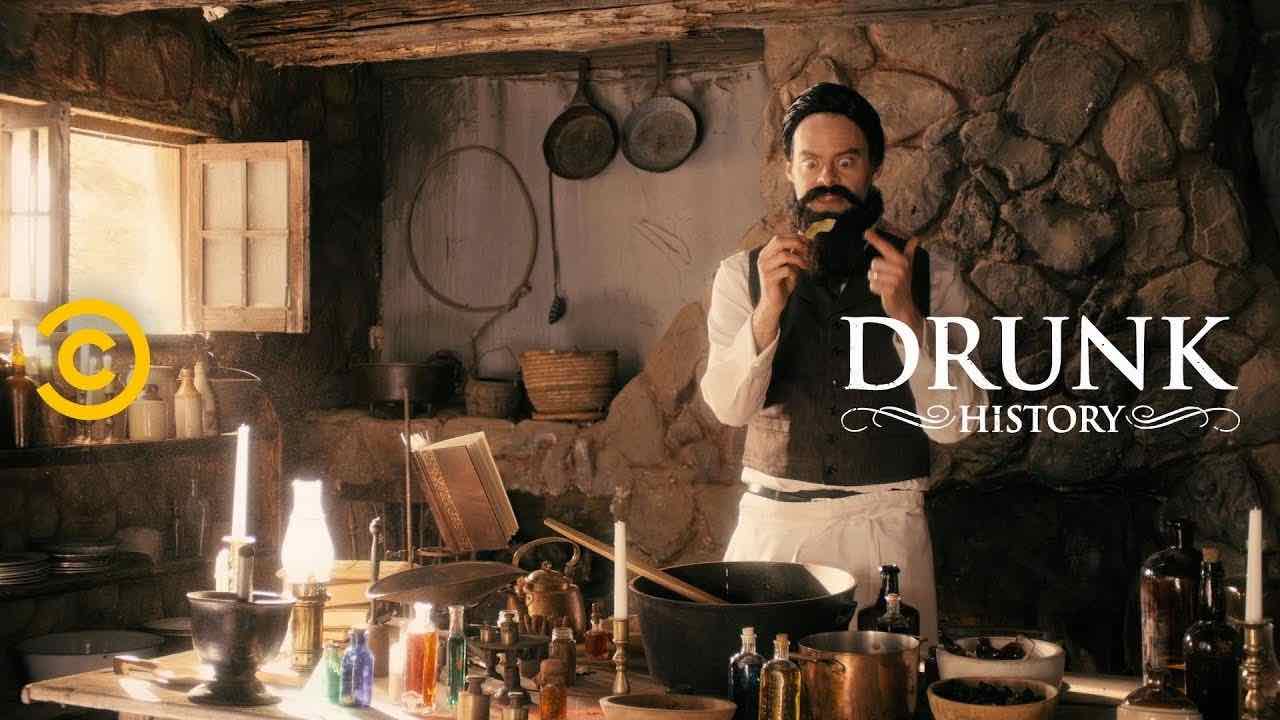 Jenny Slate (Obvious Child) may be one of the most charismatic women in comedy and her drunken account of the dude who invented Coca-Cola (played by the wonderful Bill Hader) is brimming with charm at every level and hilarious observations about “cocaine wine”. However, it’s the unintentional guest appearance of Slate’s barking dog in the story that really makes this one of the greatest. 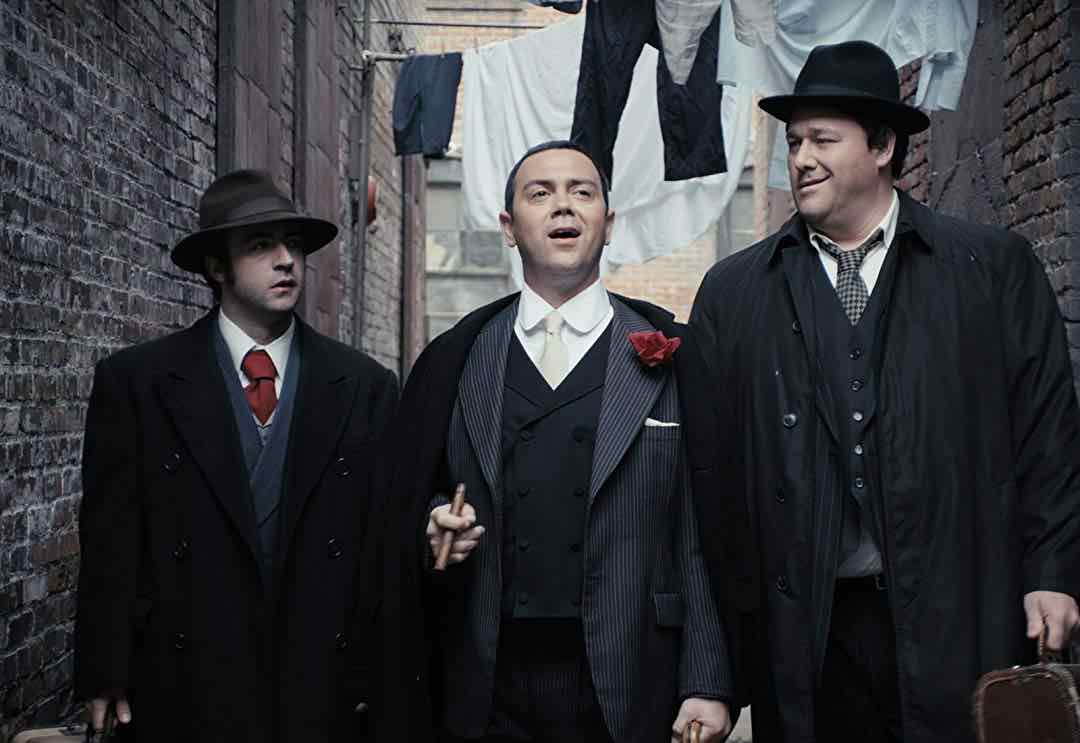 The episode opens with Derek Waters (Hall Pass) attempting to feed drunk narrator Mark Gagliardi (The Venture Bros.) cantaloupe and pineapple like a weird fruit rendering of the brain-feeding scene from Hannibal before some stupendous roasting of the KKK commences. Starring Jason Ritter (Freddy vs. Jason), Matt Walsh (Veep), and Kevin Nealon (Weeds), this episode features one of the most effectively comedic yarns. 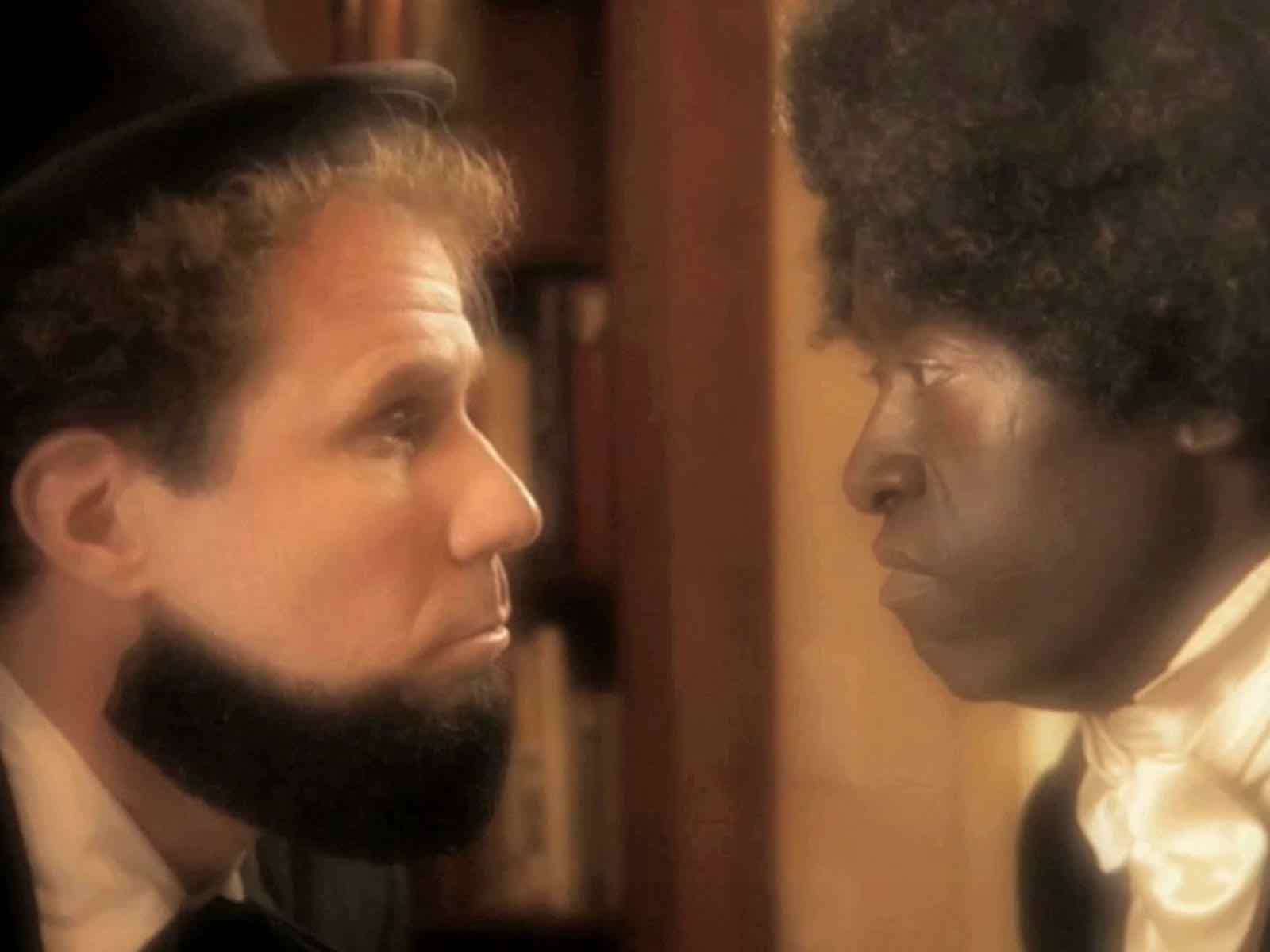 Jen Kirkman (Home Again) is the MVP of Drunk History, having slurred her way through many seminal historical events before retiring the hooch a few years back. Two bottles of wine deep, Kirkman impressively manages to tell the foundations of the story fairly well, even if she hardly ever has the right words to tell it.

Will Ferrell (Anchorman), Don Cheadle (Avengers: Infinity War), and Zooey Deschanel (New Girl) manage to beautifully lip sync every sloshed fuck-up of a line Kirkman delivers before she sleepily asks “Did I need to do a more story about them?” from under a blanket at the end. 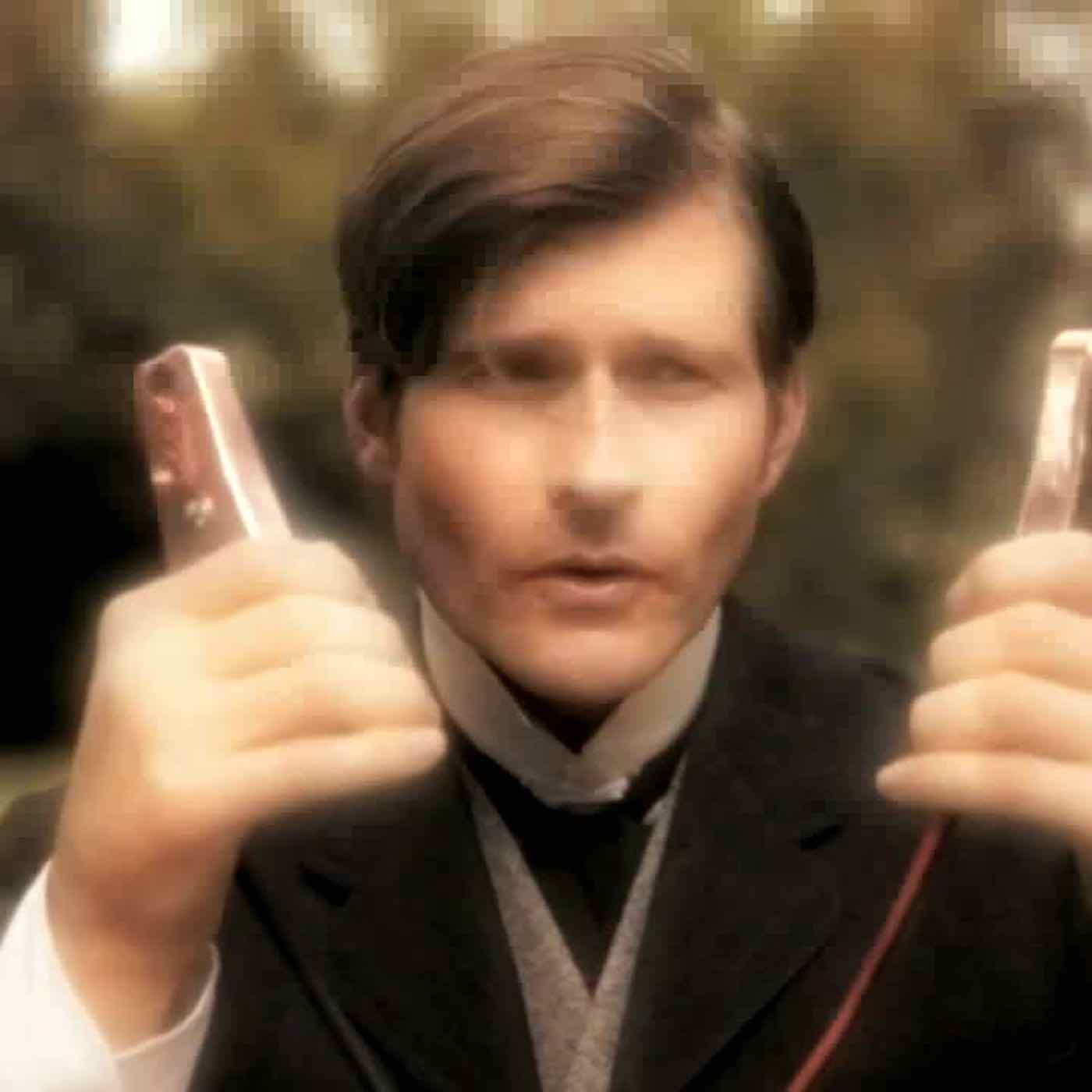 There’s pure poetry to Duncan Trussell’s messy retelling of the story of Nikola Tesla, some electrocuted cows, and ominous pineapple puke. Starring John C. Reilly (Boogie Nights) and Crispin Glover (American Gods) – who are always a damn treat – Trussell worries about being sick and talks mostly to the floor after downing a six pack of beer and half a bottle of absinthe. Tesla was the electric Jesus, son! 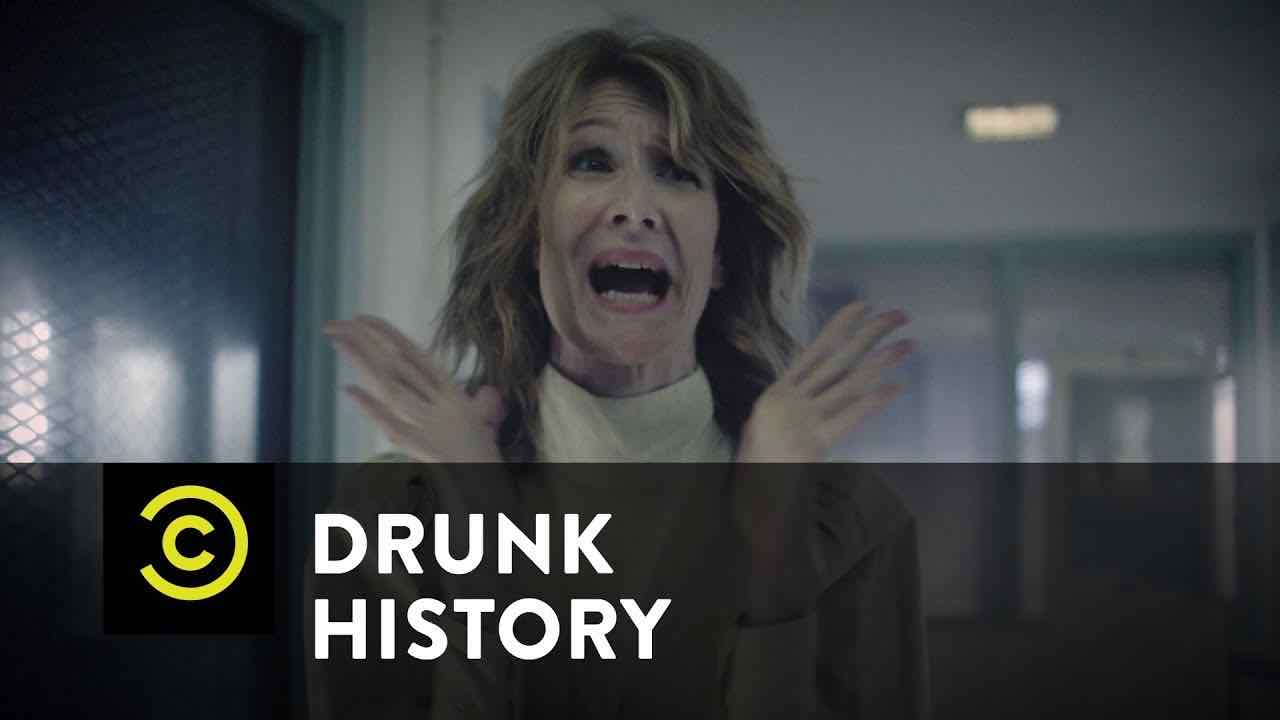 For the guest appearance of Laura Dern (Big Little Lies) alone, this episode is an absolute gem. However, self-proclaimed “drunk as s***” narrator JD Ryznar (Yacht Rock) gives her and the rest of the cast some great material to work with including the occasional random bark and numerous blown raspberries. 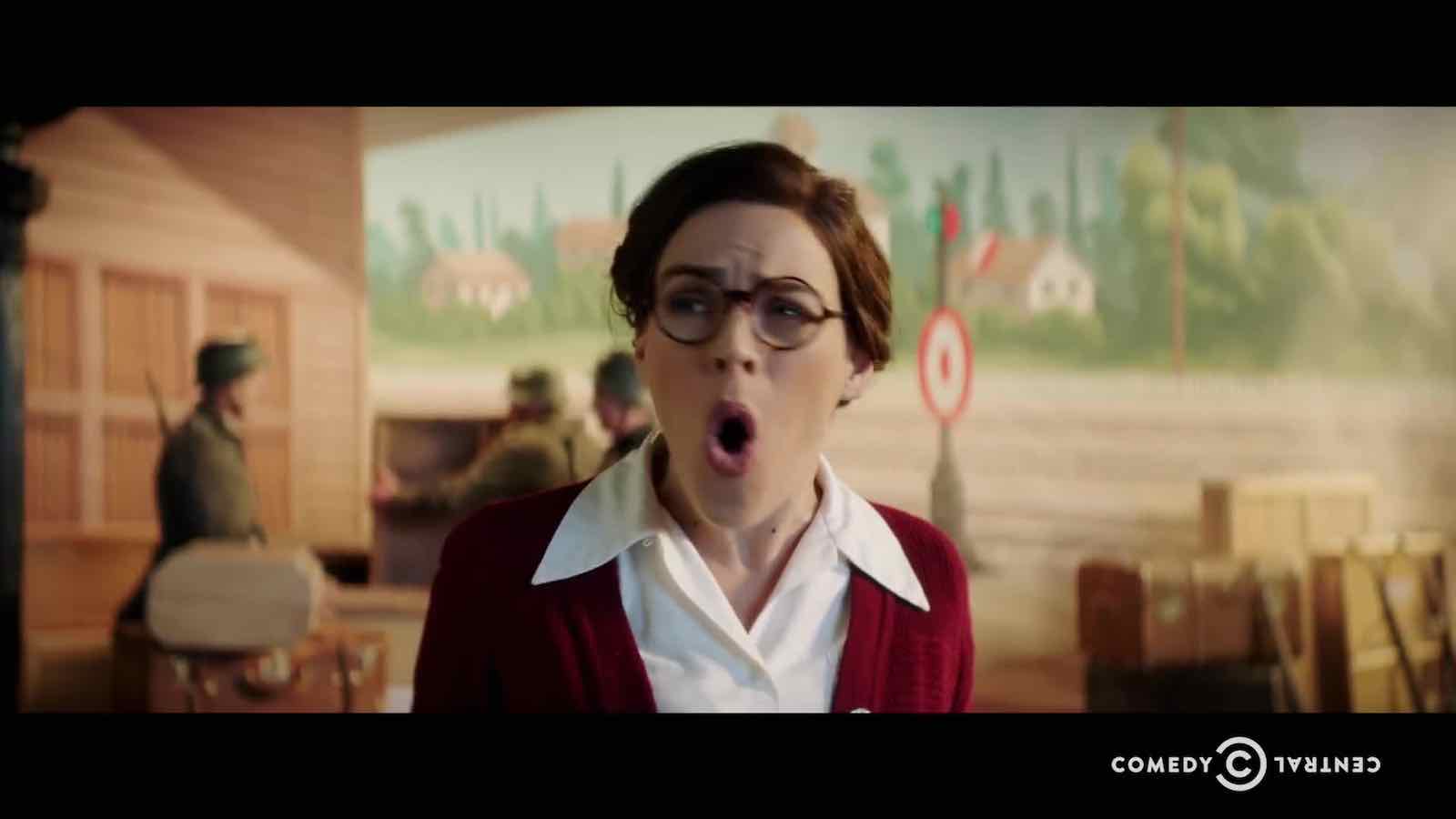 5. “Rose Valland Takes on the Nazis”

From the second the episode starts, narrator Tiffany Haddish (Girls Trip) is on top form explaining how she used to end dates by making drunken dudes color in pictures. She “never did get to” sleep with any of them because they were “outside the lines”.

From here, the episode stays on a constant comedy high straight through until the uproarious moment Haddish suggests – while barely able to contain her laughter – that Hitler is hanging out with Tupac. 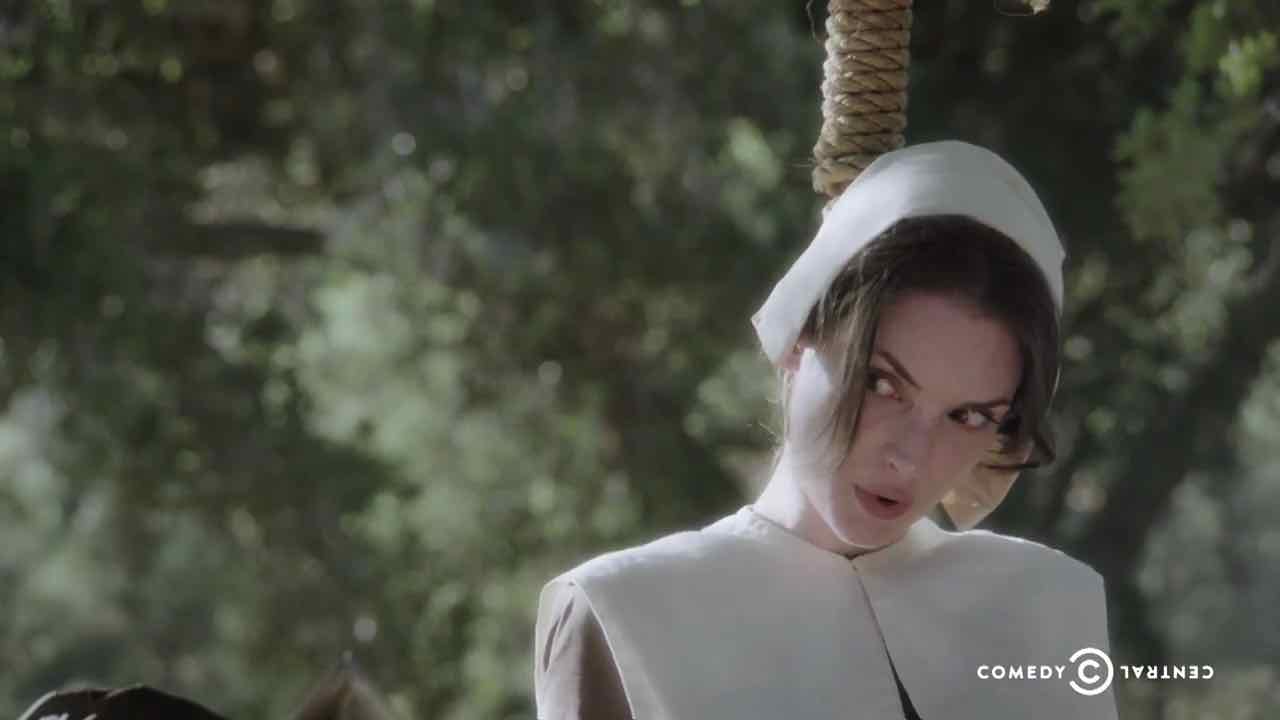 Kirkman returns for one of her finest episodes which ends with her having a good cry at the end and taking pot shots at Jim Morrison and his “horrible music”. Seeing cherished icon Winona Ryder (Stranger Things) lip-synching Kirkman’s sloppy narration is one of the purest things in this world.

Miranda gets the munchies and wants to “order Dominos” in the middle of the story. Miranda appears far more competent than some other guests, but as his sobriety dwindles, so does his capacity to tell the story coherently and it’s an absolute treat. 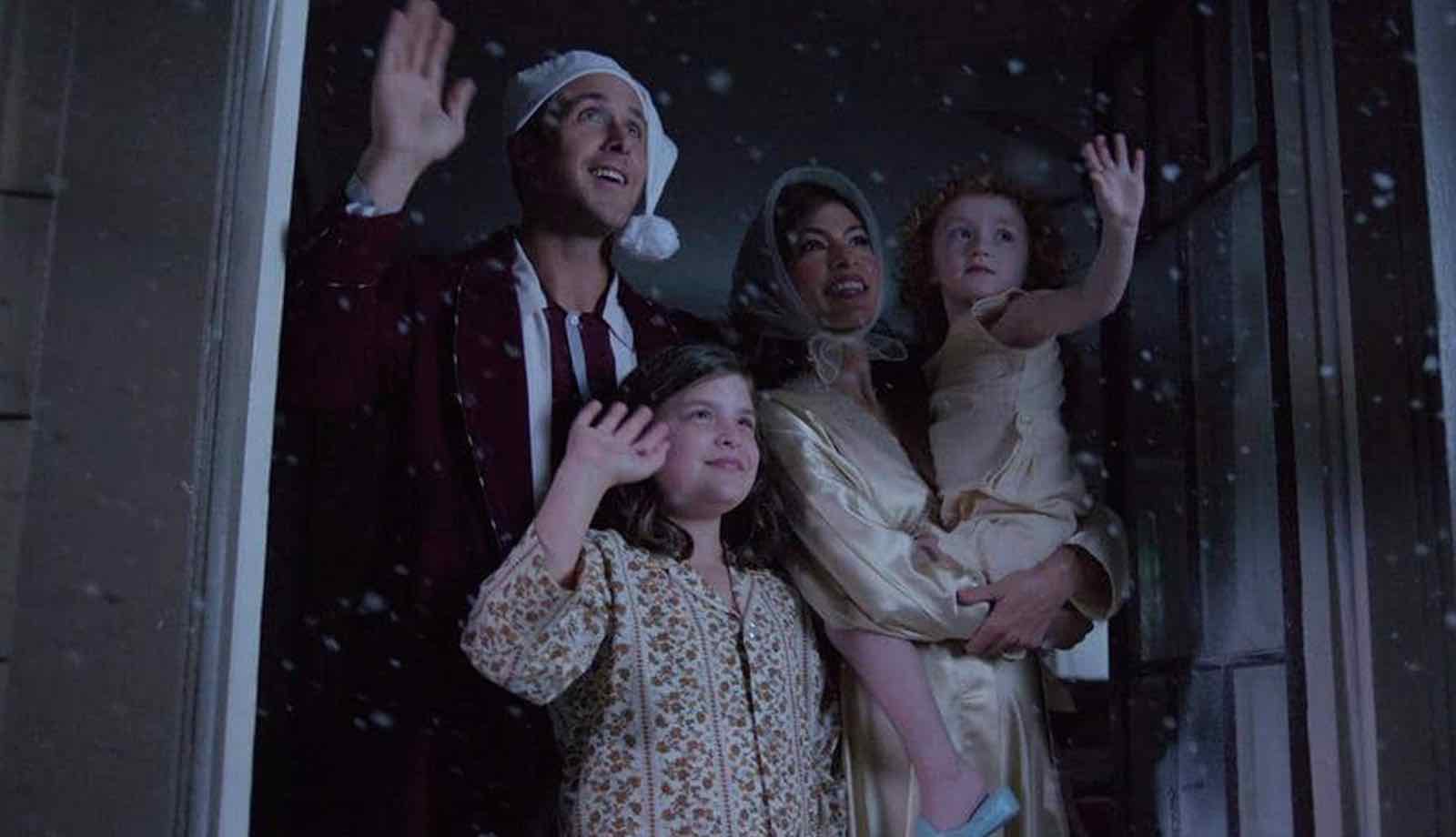 2. “Twas the Night Before Christmas”

The classic Christmas poem receives a sinister reworking courtesy of Drunk History veteran Allan McLeod (Life After Beth) who slurs the festive tale into a glorious wreckage with the help of Ryan Gosling (La La Land), Eva Mendes (The Other Guys), and Jim Carrey (The Truman Show) who bring life to his wrecked rhythms.

“I’m sorry man! I’m not trying to fucking f*** it up,” McLeod bleats after failing to name more than two of Santa’s reindeers while pretending he’s actually named all of them. It’s perfection. 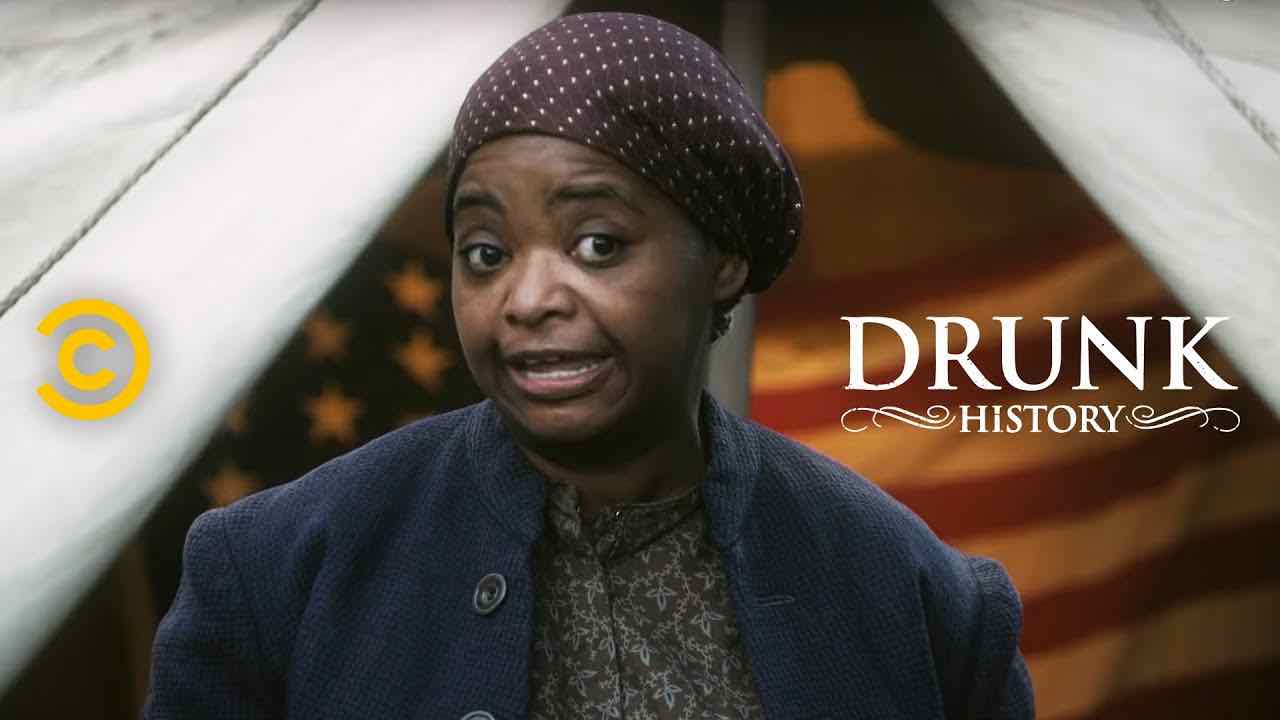 Honestly, this episode had us at Octavia Spencer (The Shape of Water) depicting Harriet Tubman, but she also does an incredible job of bringing to life Crissie West’s sloppy, bawdy storytelling too. Seeing Spencer as Tubman lip-synching the sentence “Aw, f*** that! We’re not gonna get caught by your stupid-ass traps, you slave owners!” is one of the best things that ever happened on the show. 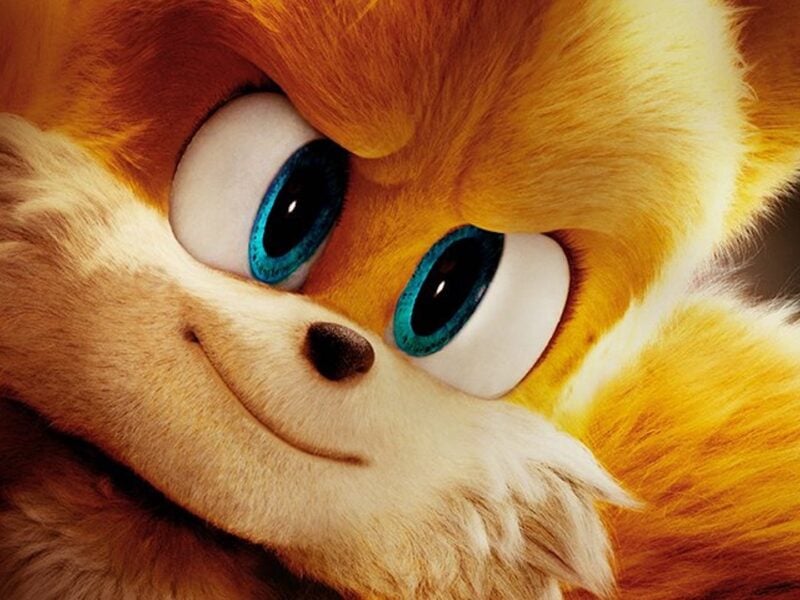 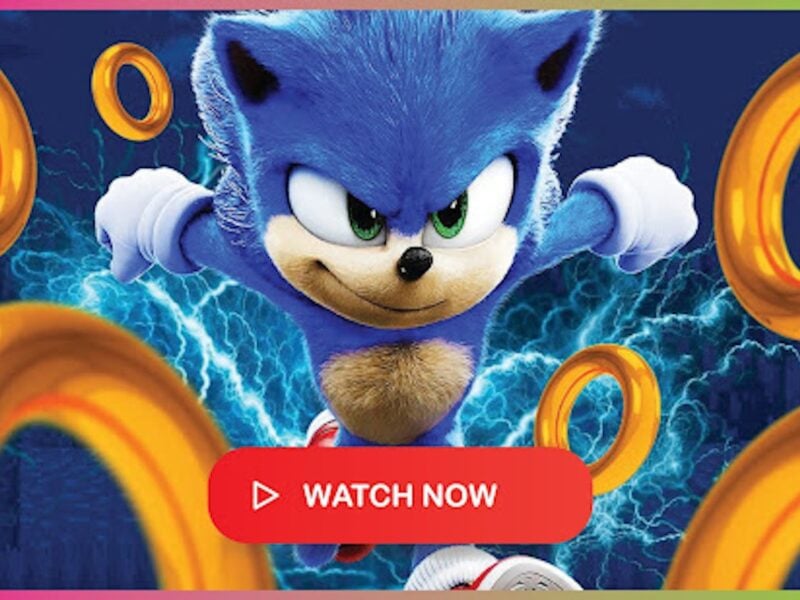