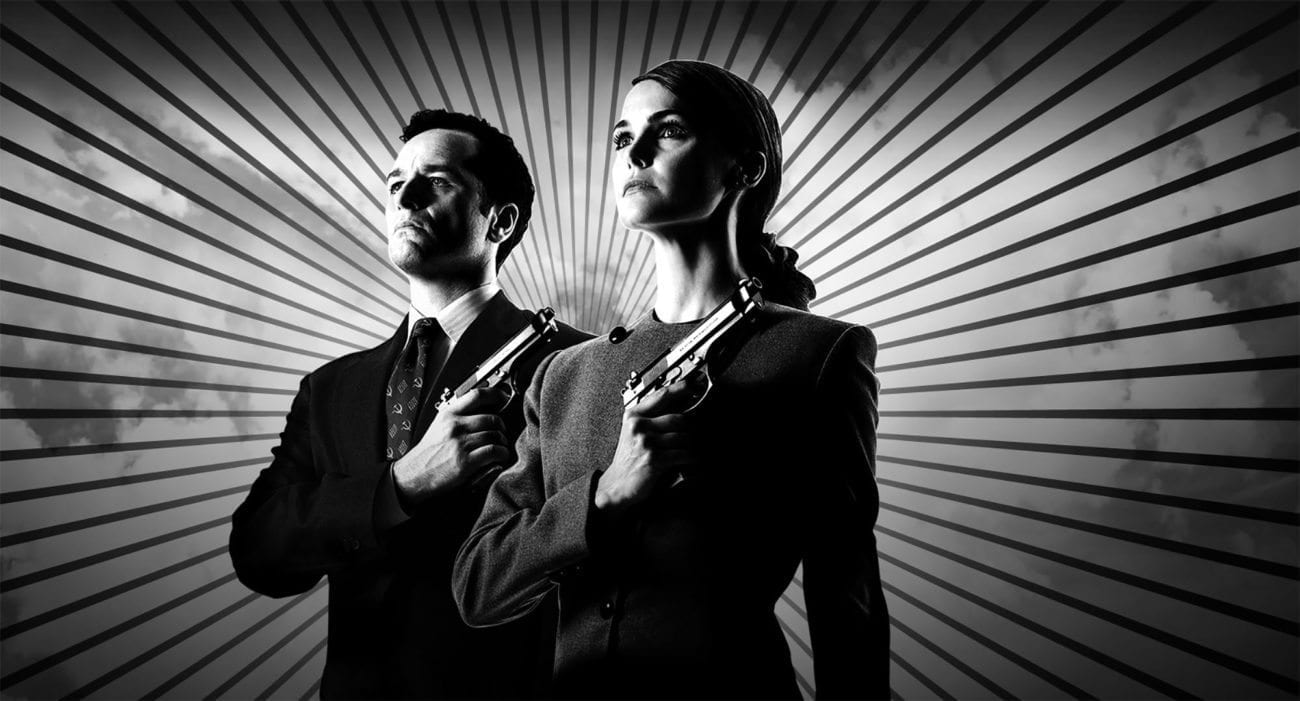 Crack open a cold (war) one: ‘The Americans’ Drinking Game

If you like peak TV, you’re probably a fan of the prestige drama The Americans. It’s a show that has something for everyone – spies, sex, drama, dressup, and Felicity (with hair intact).

We are eternally bummed this current season will be its last, so to numb the pain we devised this drinking game. Who we are drinking for:

Someone undergoes a disguise change

Anyone says “the Americans”

Likely pronounced by (the) Soviets

Anti-Soviet propaganda is taught at school or on TV

And hopefully as frosty as your drink is.

It’s always in the middle of something – and never a good omen.

Someone mentions going to bed

Might as well drink, because the conversation just interrupted will never get picked up again.

Easy with this one – ya girl Paige has a wardrobe loaded with ‘em.

There is a scene at the ministry

Pastor Tim writes in his diary

“Are you there, God? It’s me, Timmy.” The dude is such a Judy Blume character it’s unreal.

Blaze up, friends! This is the good Afghani stuff ℅ the Center.

Elizabeth works on a drawing

much talent, such wow

Mom of the year?!

extra drink if you think all sides are wrong

Putting ideology before family never made you more thirsty.

Phillip and/or Elizabeth lies to the kids

Anyone mentions Henry or Henry appears

Take a larger sip if you’re immediately filled with envy.

Go on, have a can of coke, you crazy kid!

“Yes, hello. I’d like to book a flight to shitfaced, for departure immediately.”

There is a scene in EST or EST is mentioned

Phillip does the books

Take an extra slurp if he looks super sad while doing so.

Why is this so adorable? It’s adorable.

Phillip puts his cowboy boots on and/or goes line-dancing

Oh shit – go easy on this one or you’ll be hammered within five minutes.

Stan & Phillip have a beer

Really go to town on your drink if it happens to be a Miller High Life. Actually, unless it’s Stan & Phillip, NO DRINKS while any other characters are drinking – this ain’t no comedy, people.

The sourest drink of them all.

Keep an eye on the left side of the agent’s face to inspire your “drinking tick”.

Matthew appears or is mentioned

Also: do an air guitar solo.

The FBI’s mail robot is mentioned

That mail robot is legit too pure for this world.

Hold a hand to your heart and raise a glass to that goddamn hero while you’re at it.

People go into the FBI “vault”

Drink all those secrets in, folks.

Stan does something illegal

KGB or FBI agents get a new assignment

KGB agents get a new handler

Take an extra large glug if you immediately hate him/her.

We meet a new KGB agent

A honeypot scheme is underway

Someone has sex in the line of duty

A character goes to a lock-up

Someone holds a flashlight in their mouth

Don’t swallow your drink until they’re holding that damn thing with their actual hands.

When there’s a bug (we know about) in the scene

Drink that tension down.

Someone plants a bug

Climb behind the couch and take a discreet clandestine sip, you stealthy bastard.

Anyone goes into the Jennings’ basement

Anyone deciphers a code

Hold up – you are over 21 and legitimately who you say you are, right? Good, cool. Just checking. Not paranoid at all.

Someone goes to a safe house

Also: go to your own “safe house” and stock up on supplies (the fridge for more beer).

Someone stays at a motel

Anyone goes to a dead drop

Shit is about to go down.

Be on your best behavior, comrades.

There is a flashback to the USSR

on your feet in respect for the “home country”, comrade

Definitely don’t do that Russian impression everyone is sick of (unless you’re alone, in which case go to town, buddy); extra sip if it’s Keri Russell butchering her own name.

Splash some of your drink on your face in solidarity.

Martha is in Russia

Someone is locked in a car trunk

Drink long and hard if terrible things are most definitely going to happen to them.

Pour one out for your fallen crony.

Someone disposes of a body

Dispose of your empties.