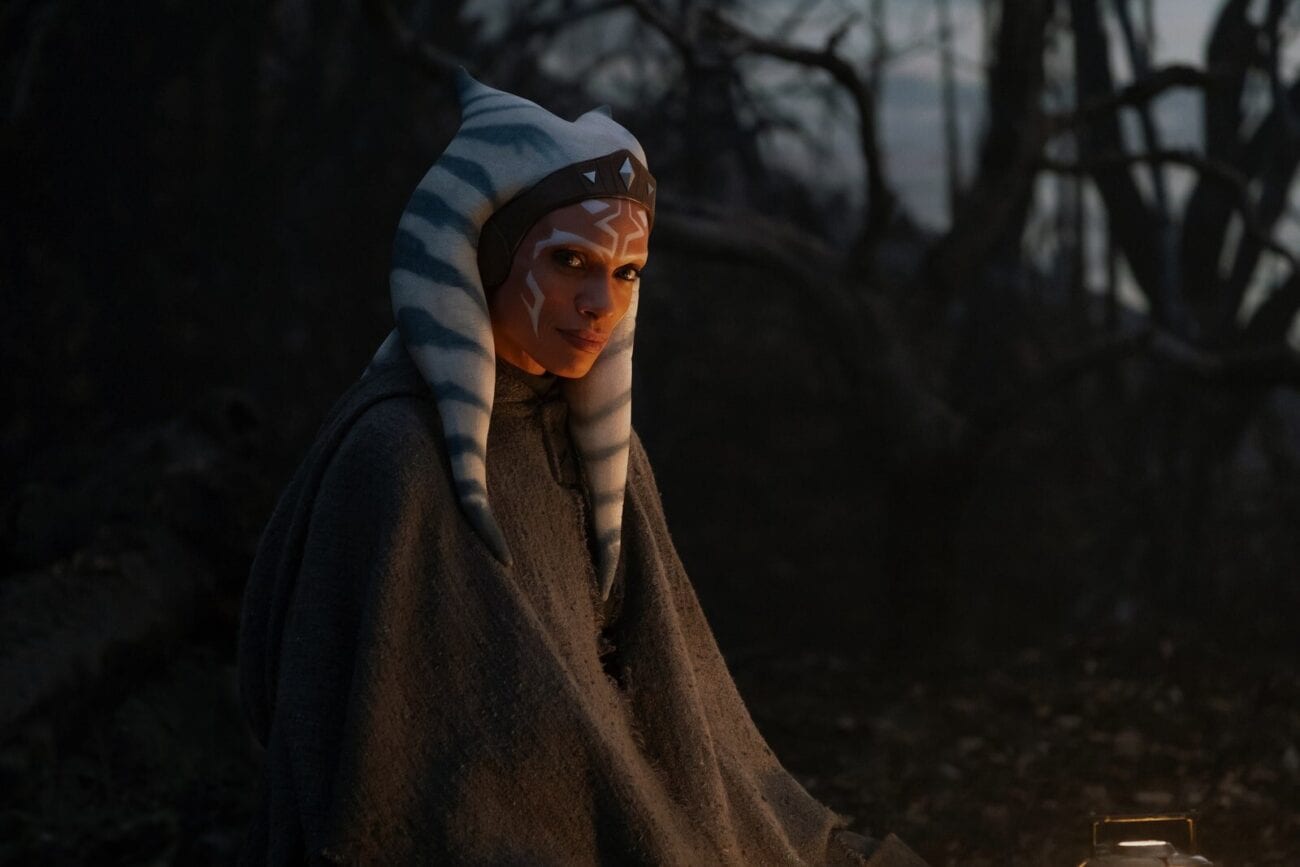 This holiday season Disney popped off a plethora of promising Star Wars spin-off titles including Rangers of the New Republic, Andor, The Acolyte, Visions, and Lando. But the one we simply can’t stop dreaming about is of course the goose-bump inducing Ahsoka spin-off.

Ahsoka, a new Original Series, starring @RosarioDawson and set within the timeline of @TheMandalorian, is coming to @DisneyPlus. pic.twitter.com/ZojpCkhPS7

A key character from the animated series Star Wars: The Clone Wars and beyond, Ahsoka Tano makes quite the live-action entrance on The Mandalorian in season 2, episode 5, “The Jedi”. Fans of the animation and unknowing Jedi-lovers alike found themselves entranced by the formidable “gray” Jedi expertly dual-wielding her white lightsabers.

We may not see Ahsoka premiere on Disney Plus until 2022 at the earliest, but that doesn’t mean we’re going to stop obsessing over what-will-be or what-could-be. Here’s a look inside the whispers hinting another beloved character from the animated series Star Wars Rebels might be by Ahsoka’s side: Sabine Wren. 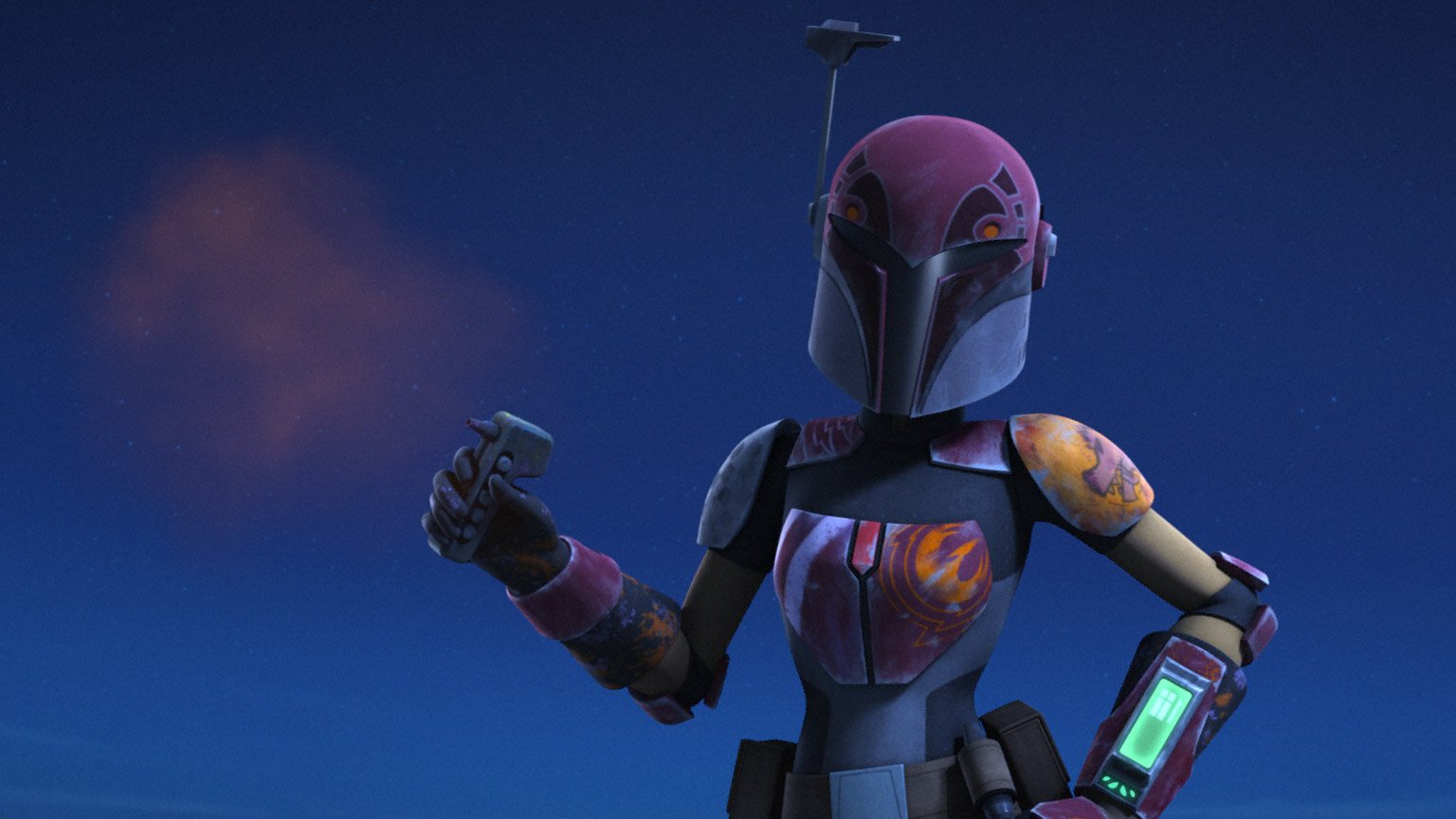 Word from Kessel Run Transmissions has dished about the upcoming Ahsoka series serving as a sequel to Star Wars Rebels, also implying that heroine Sabine Wren could be a recurring character (if not a consistent companion to Ahsoka throughout the series.) Known for being a feisty badass, Sabine would undoubtedly be a strong female lead to naturally compliment Ahsoka.

Those familiar with Star Wars Rebels know Sabine well: she’s a Mandalorian like The Mandalorian’s Din Djarin but also a revolutionary leader and close ally to Bo-Katan (yet another animated character who appeared in The Mandalorian.) Sabine even carried the Darksaber for a time and trained with Jedi Kanan Jarrus to hone her saber skills.

Tiya Sircar, the voice actress who portrayed Sabine shared her enthusiasm on Twitter about the idea of resuming her role as the fierce Mandalorian fighter. The Mandalorian set a precedent for reinstating voice actors in a live action role of their character with Katee Sackhoff playing Bo Katan, so drawing up posters of Tiya Sircar next to Ahsoka actress Rosario Dawson isn’t a longshot. (Though Dawson didn’t voice Ahsoka.)

The main reason fans are projecting Sabine will have a role in Ahsoka is due to the Star Wars Rebels finale where (spoilers!) Ahsoka & Sabine join forces to find Jedi Ezra Bridger, a close friend to Sabine and powerful liberator. Ezra was last seen facing off against Imperial strategist Grand Admiral Thrawn, but both of them are currently MIA.

Before Ahsoka’s appearance on The Mandalorian, the Rebels epilogue scene shown above was her most recent placement on the timeline. Considering that The Mandalorian is set approximately five years after Rebels ended, we can assume Ahsoka has been on her quest to find Ezra with Sabine for about half a decade.

While we don’t know much about Ahsoka’s journey taking place between Rebels and her time on The Mandalorian, we do know why she’s where she is and what she’s up to. Because Bo Katan knew where Ahsoka was when directing Din Dijarin to her, clearly they’re in touch and Katan is likely aware of the Jedi’s information-seeking on Corvus.

Ahsoka works with Din to free the oppressed civilization under the ruthless rule of the Magistrate, but she plainly states that her main objective is to search for Grand Admiral Thrawn. Magistrate Morgan Elsbeth (Diana Lee Inosanto) is apparently Grand Admiral Thrawn’s protege, so we’ll have to see if she led Ahsoka in the right direction.

We don’t know where Sabine could be while Ahsoka is on Corvus, but we can hope that the two will soon reconvene as the story continues in Ahsoka. Though, it’s always possible Sabine could always show up in The Mandalorian or another spinoff first, considering she is a Mandalorian who once carried the Darksaber now in the hands of Din Djarin.

A Star Wars series featuring Ahsoka & Sabine have long been in the thoughts of creator Dave Filoni. Two years ago the writer made this Twitter post with the hashtag #RebelsRemembered, sending a message to all Star Wars Rebel fans anxious for a continuation of the story.

While Filoni assured fans at the time that his concept art “is not a new show”, someone important may have seen this and rolled with it in the new live-action Ahsoka series. But without an official announcement of Sabine appearing in the series, we’ll just have to wait and see what the future holds for Ahsoka & Sabine.

Are you hoping to see Sabine Wren in Ahsoka? Let us know in the comments.