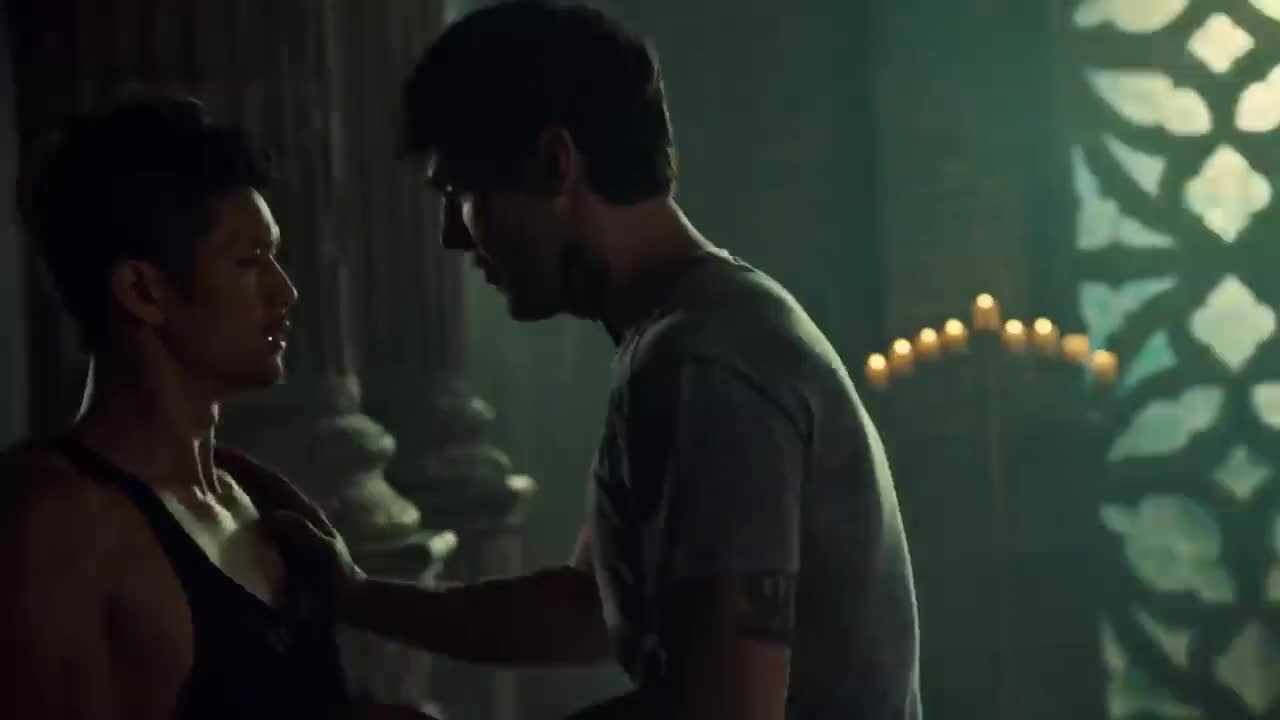 During our fight to #SaveShadowhunters, there’s nothing wrong with taking five minutes away from activism to celebrate the finer things in life. If you’ve been living under a rock for the past couple years, you might not have realized we’re low-key obsessed with the Shadowhunters couple known as Malec.

The love story between Shadowhunter Alec (Matthew Daddario) and Warlock Magnus (Harry Shum Jr.) is truly one for the ages. It’s offered one of the most beautiful, romantic, and occasionally funniest romances ever seen on the small screen.

Oh, and one other thing: Malec is as hot as hell. We previously brought you a ranking of their sexist scenes; now we’re bringing sexy back with another thirst trap of an article for you. 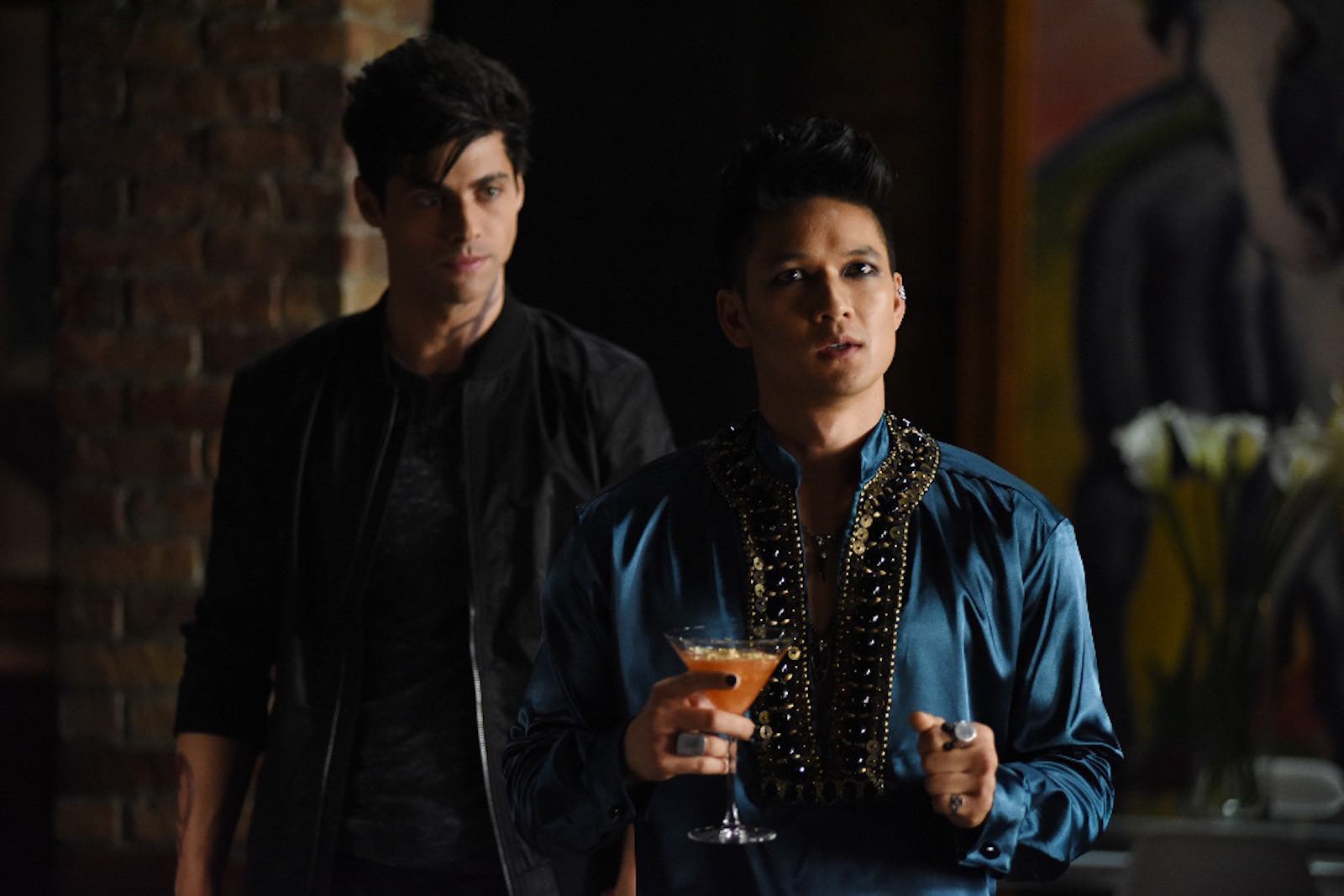 In Shadowhunters season 3, it’s very apparent that Malec have the ability to make the most domestic and mundane of tasks look totally smoking hot. There are many scenes in which Magnus and Alec are engaged in ordinary domesticity that has us spinning out and losing our minds.

However much more comfortable Magnus and Alex are in their relationship, there are also quite a few scenes in which viewers get to witness them exploring and pushing their intimate boundaries further than ever before.

We want to take a moment to thank Matthew Daddario and Harry Shum Jr. for bringing the fire, giving the viewers everything they could’ve hoped for. Saddle up, folks. We’ve got the hottest moments of Malec in season 3 for you right here. 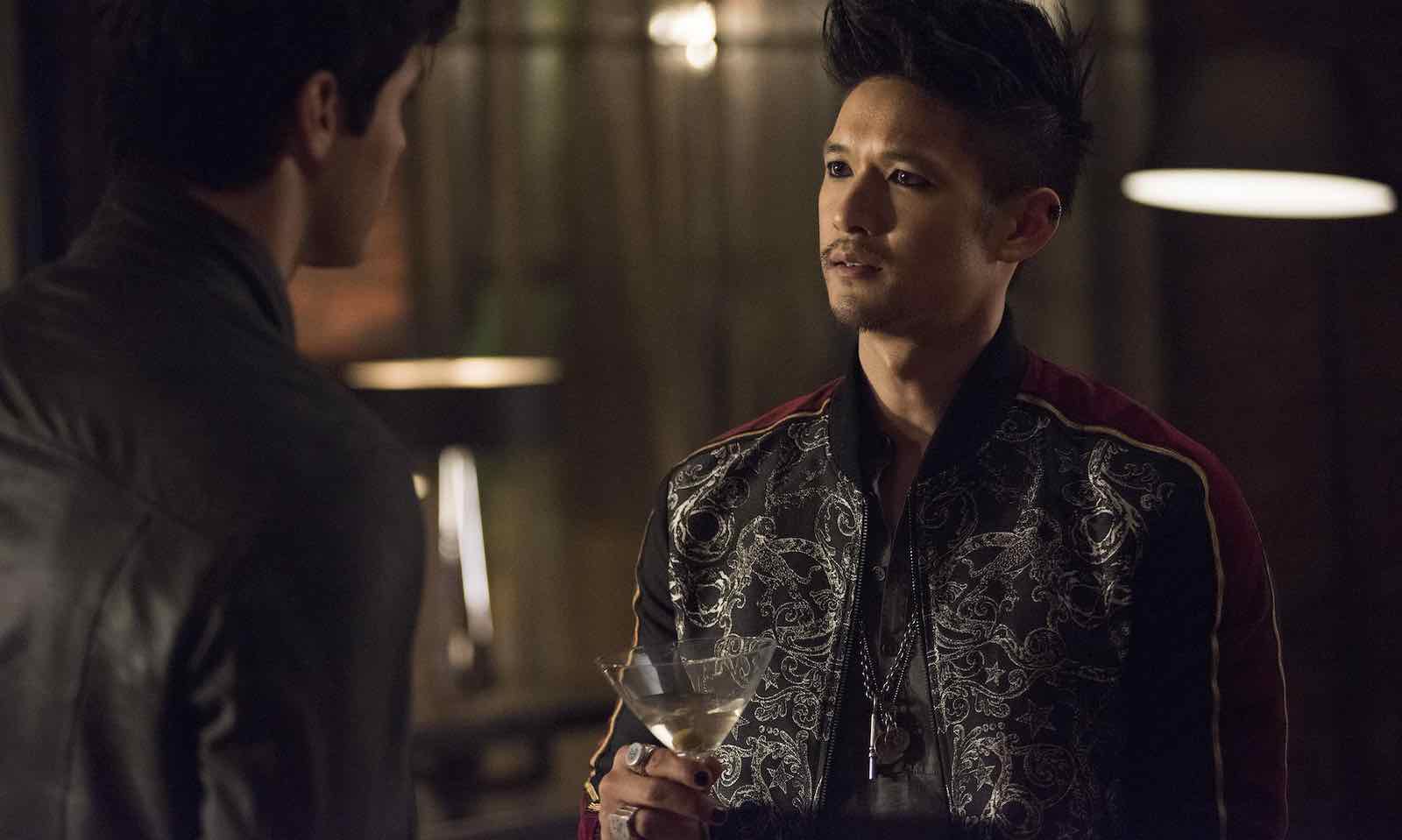 This is the first episode of the season, kicking off with Magnus being stripped of his duties as High Warlock of Brooklyn (gasp!). On the flipside, Alec is offered a promotion on the council, which means moving to Idris – without Magnus. What a conundrum!

The situation leads to a moment at the end of the episode at the Hunter’s Moon during which the boys find themselves playing a game of pool and talking out their feelings. There is something electrifying about watching these guys process a gamut of complex feelings over a competitive game of pool.

Alec finishes off by leaning in and planting the warmest, most loving kiss on Magnus’s lips, telling Magnus he’s not going anywhere without him. And we died a little on the inside. 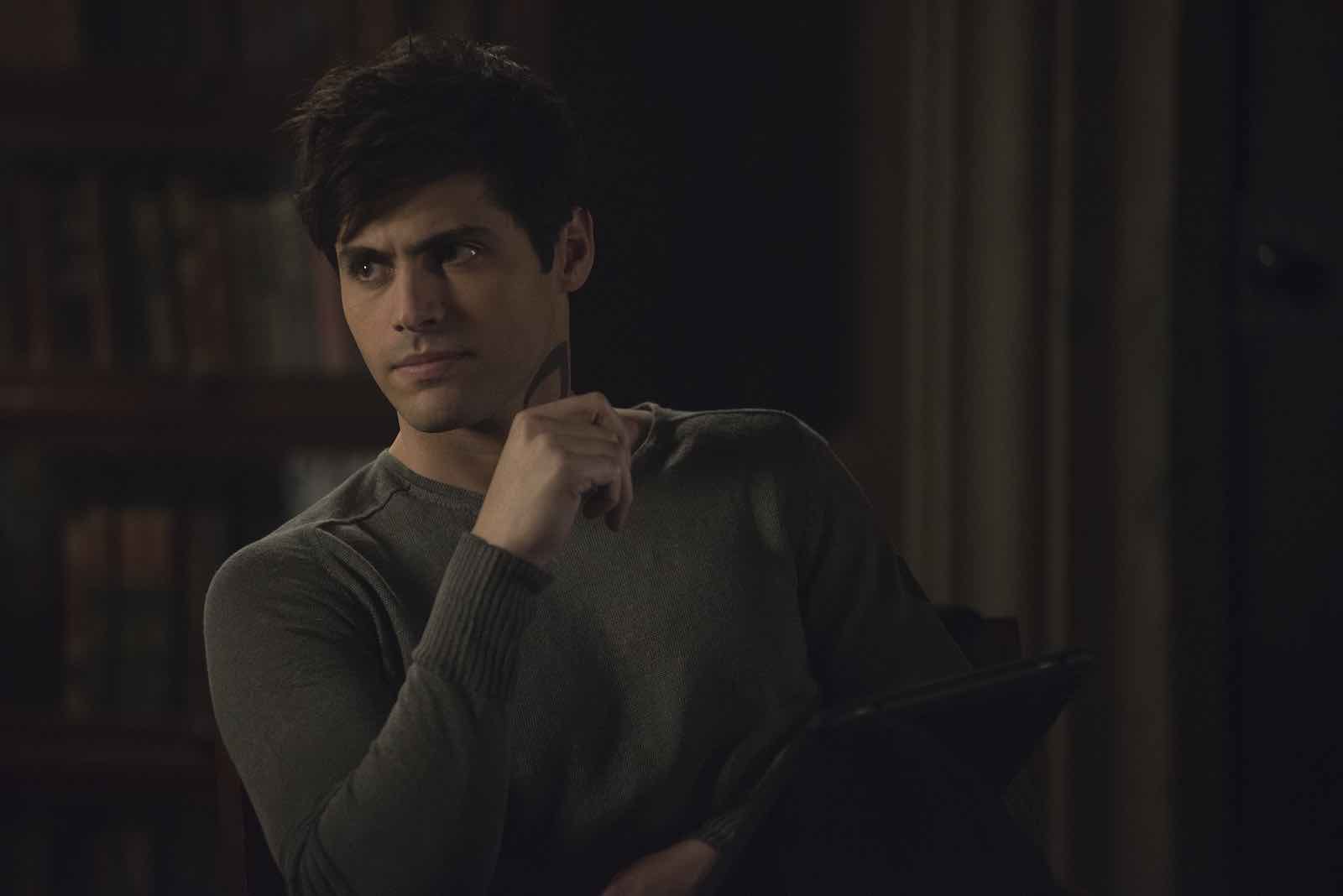 Up to this point we were really only privy to watching Alec express jealousy over Magnus’s dating past. Magnus is the picture of total confidence in his man. Enter newly openly gay Shadowhunter, Andrew Underhill.

Alec shares with Underhill that he and Magnus are experiencing a few relationship issues. Magnus expresses concern that Alec “aired their dirty laundry to the entire Institute” (He told one person, Magnus, just one.) and the delightful glimmer that captures Alec’s eyes as he realizes Magnus is jealous is everything.

Excuse us while we grab the popcorn and attempt to watch Magnus explain his way out of this one. Whoever thought jealousy could be so hot? We did – that’s who. 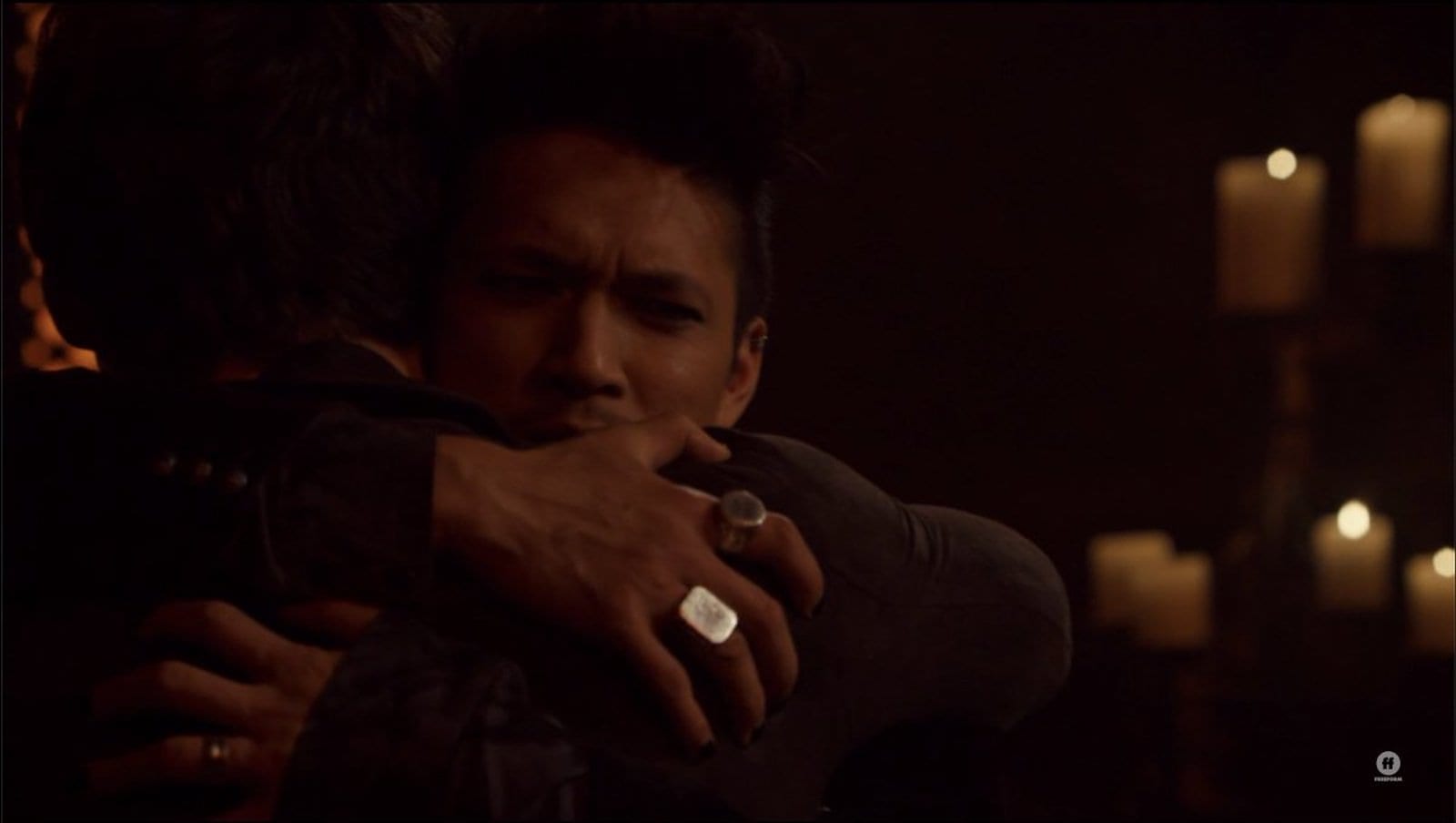 What is it about these two and their unwavering desire to be together that gets the ShadowFam so hot and bothered? In this episode, Alec and the troops rally together and head out on a dangerous mission to rescue Magnus from Lilith and the clutches of Edom.

At its end (they made us wait the whole episode) Magnus is standing in his chambers solemnly thinking about the man he left behind. Just then Alec desperately calls out for him. Swoon.

The sound of Alec’s voice echoing through the halls has our hearts fluttering like crazy. Then, they very dramatically run into each other’s open arms and pull each other in for one hell of a reunion hug. But goodness, please explain how a hug had the collective ShadowFam standing and cheering? Take a minute, rewind the scene, and watch it twice more. You’ll know what we’re talking about. 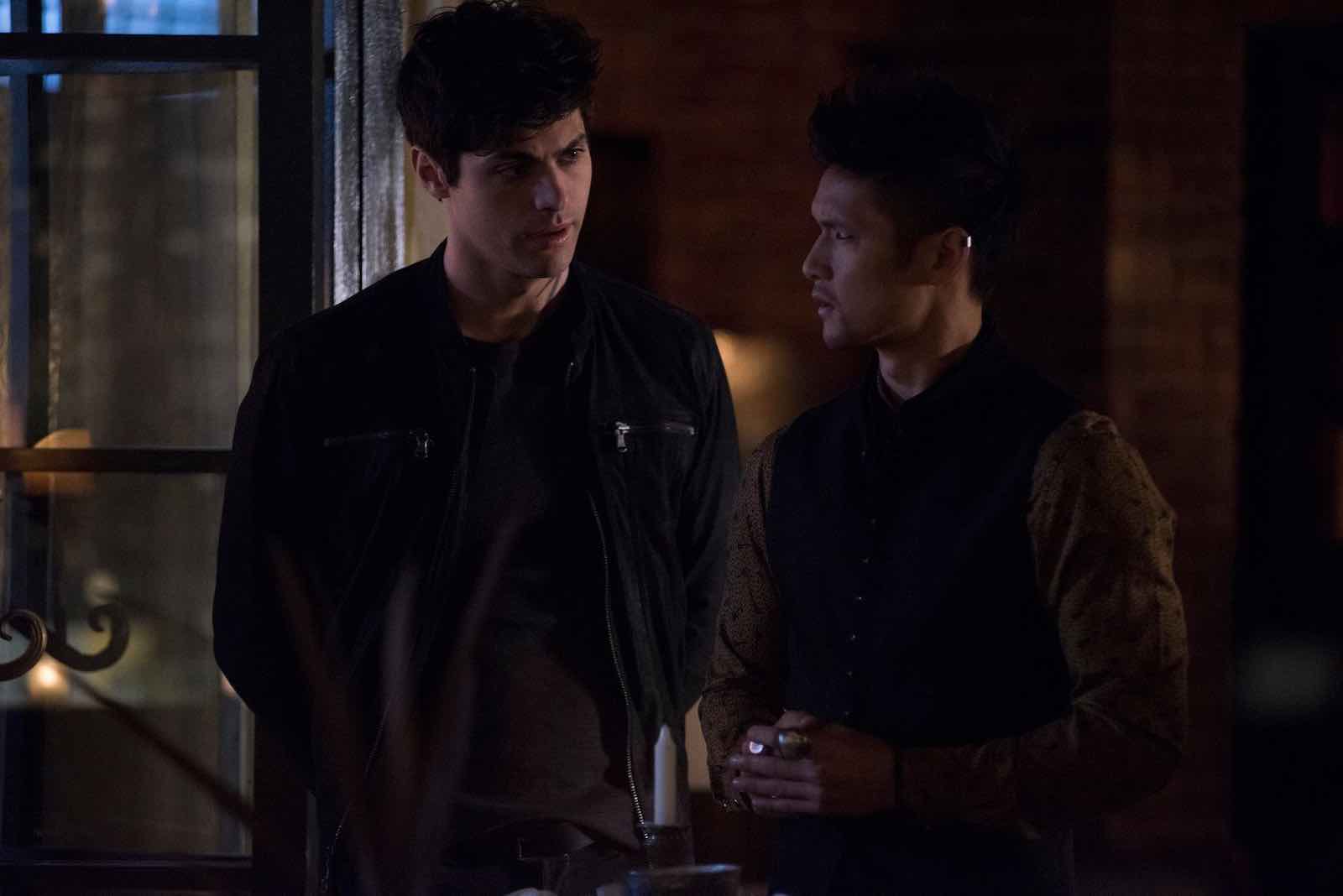 In this episode, a powerless Magnus gets captured by Iris. Don’t worry: Alec ends up getting him back, but the whole ordeal shakes Magnus up quite a bit. He hates the idea that he doesn’t have his magic to protect him from danger, that others have to defend him.

Alec capitalizes on the moment and leans in close to Magnus, his voice all husky and deep: “I know a thing or two about fighting. What do you say I help you out?” The double entendre gave us chills, and Magnus was clearly taken by the moment as well: “Well, I thought you’d never ask”.

We approve, Magnus. We approve! 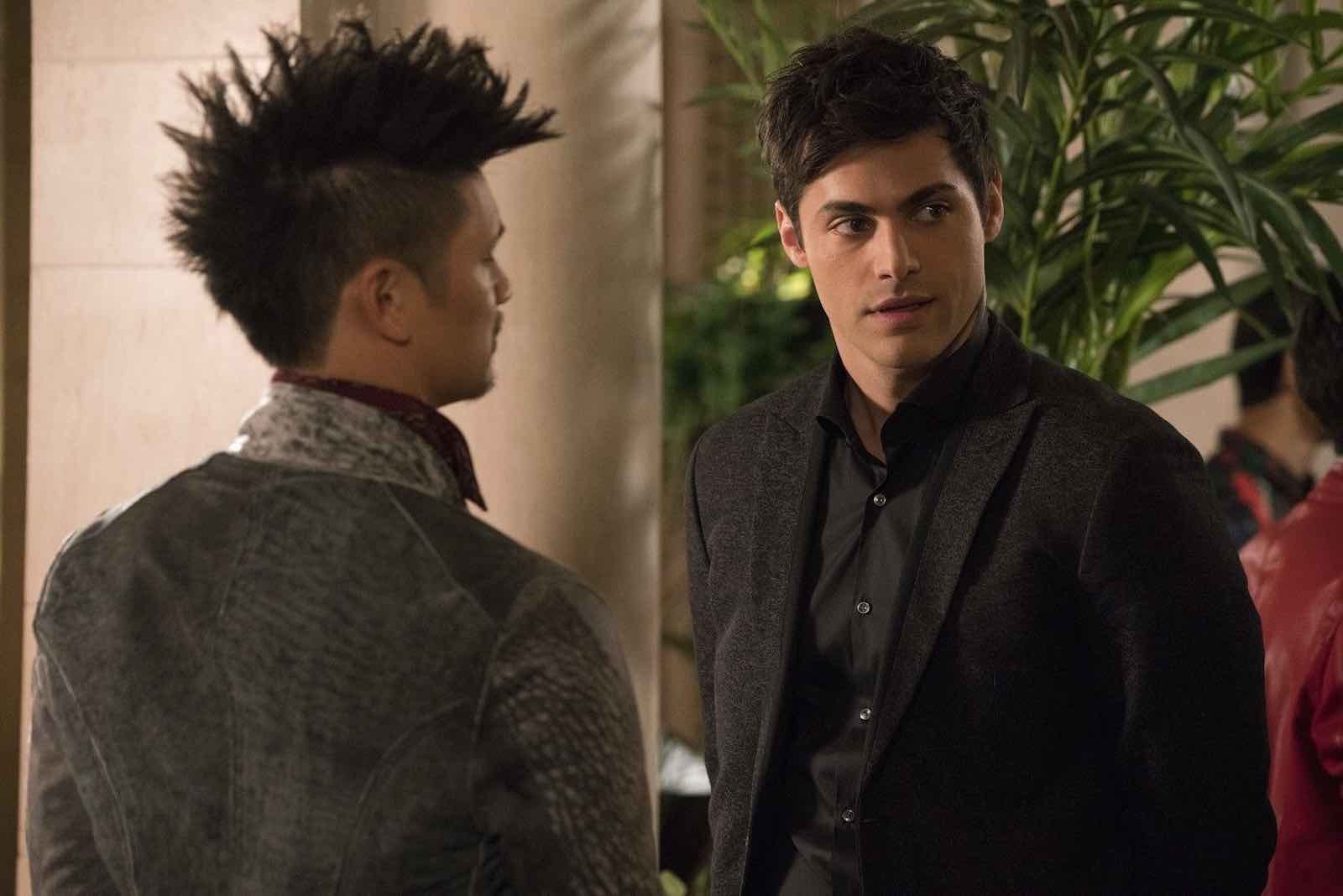 In the second episode of the season, we’re treated to an early morning scene at Magnus’s loft. Alec gets out of the shower and the guys stand around in pajamas and underwear talking about shampoo. Seems innocent enough, right?

But on this occasion, Malec are only semi-dressed and Alec’s flawless black hair is all wet and glistening from the shower. This is one of those moments watching them plod around the apartment in domestically comfortable bliss that lights a fire inside us all. We wonder if it has anything to do with Alec’s perfectly exposed legs. Nah, couldn’t be. 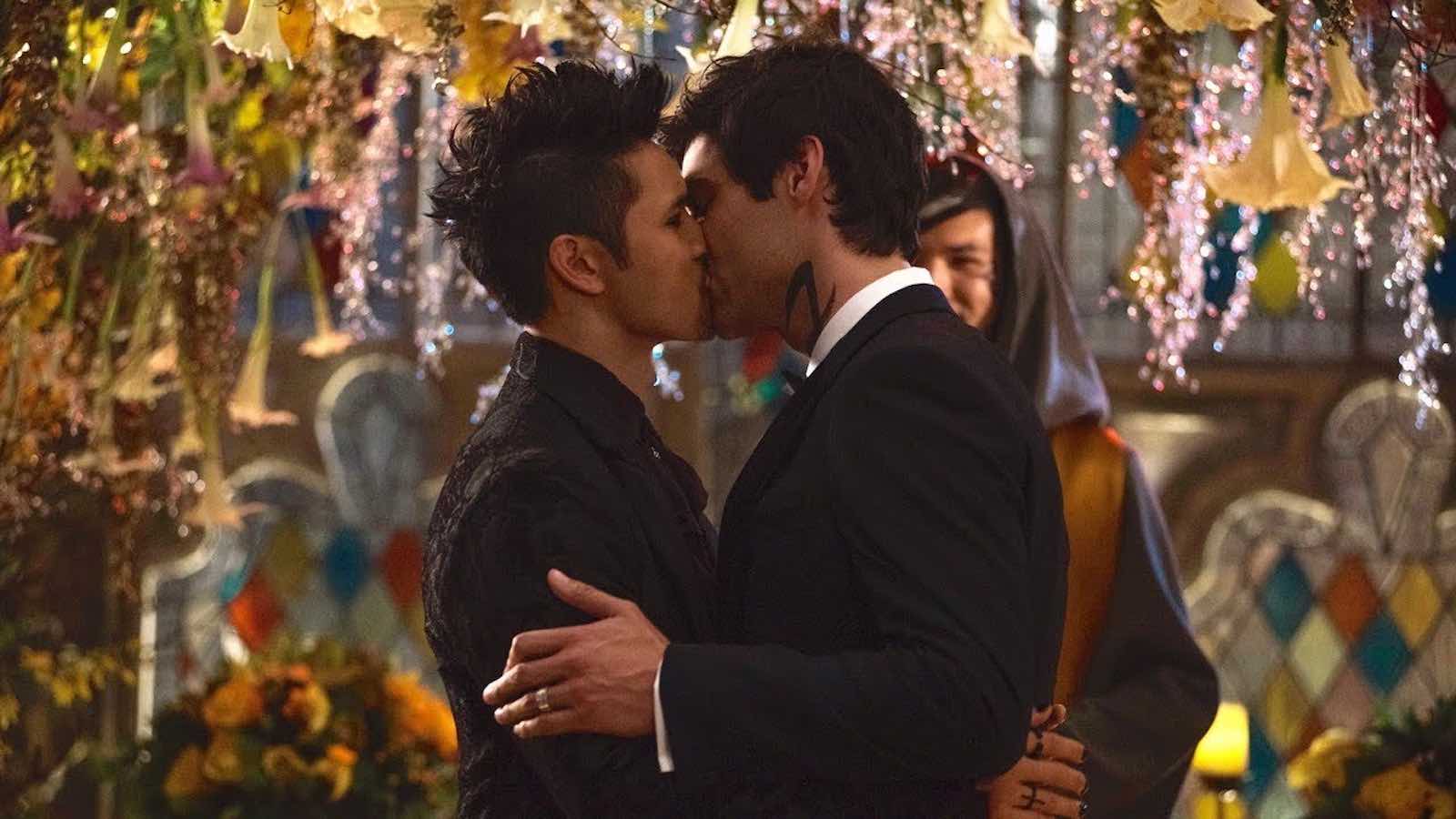 Apart from the fact that it’s the last episode and we’re completely cut up it was the end of the road for Shadowhunters, this episode is an absolute treasure, full of many great moments for Malec.

By this point, Malec have proposed to each other and Alec and the crew have returned from their journey to rescue Magnus from Edom. Alec gets out of bed to find Magnus preparing invitations for their wedding later that night. Warlocks don’t mess around. 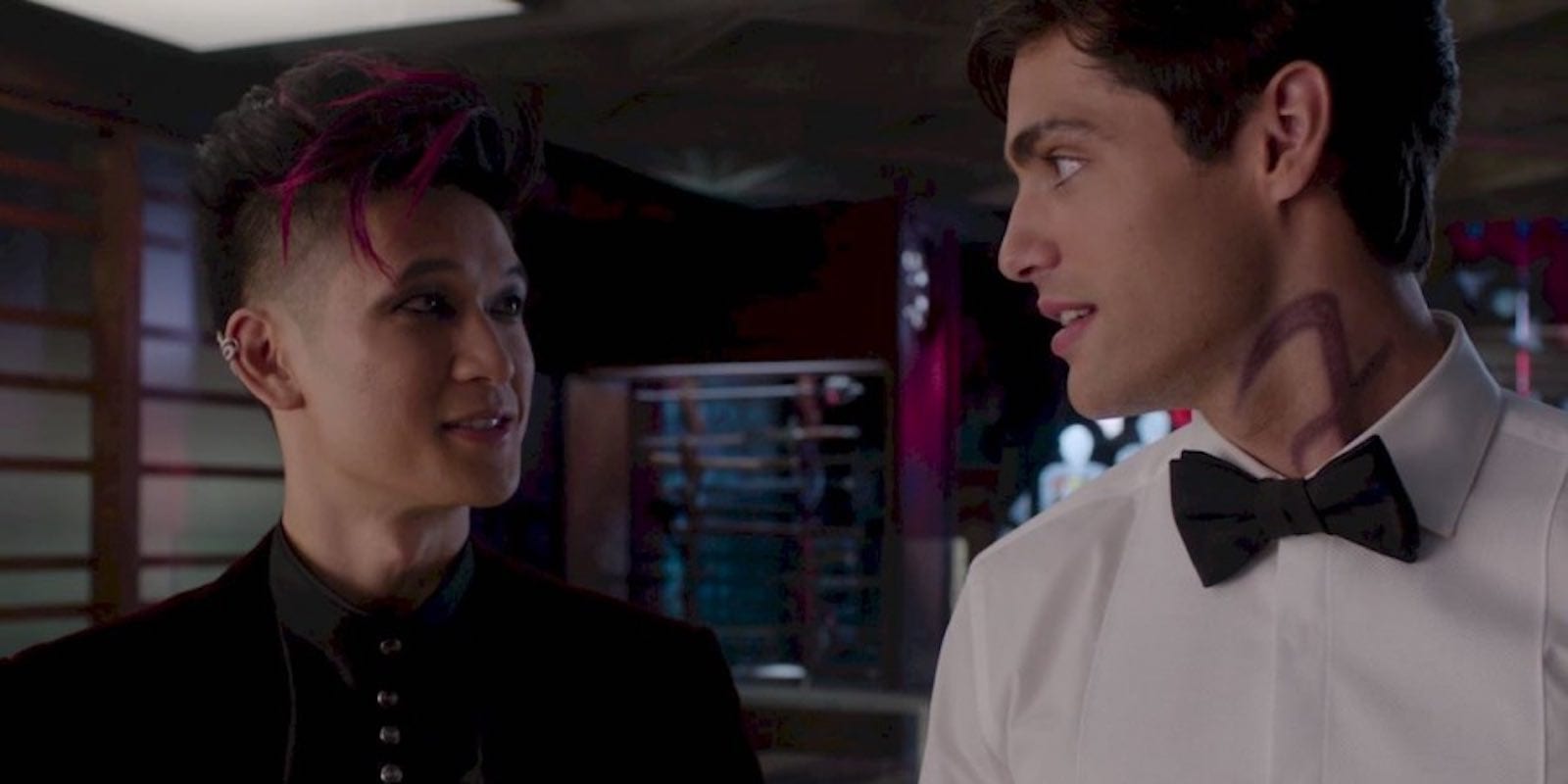 The guys go back and forth and spend twenty seconds planning the ceremony, only to land on the suggestion from Magnus that they should both wear tuxedos. “I do like you in a tux,” agrees Alec, as fireworks explode in his eyes, and in ours.

The way Alec looks at Magnus as if he’s already visualizing what he’s going to do with the tux requires absolutely no more words. Excuse us while we go dunk ourselves in an ice bath. 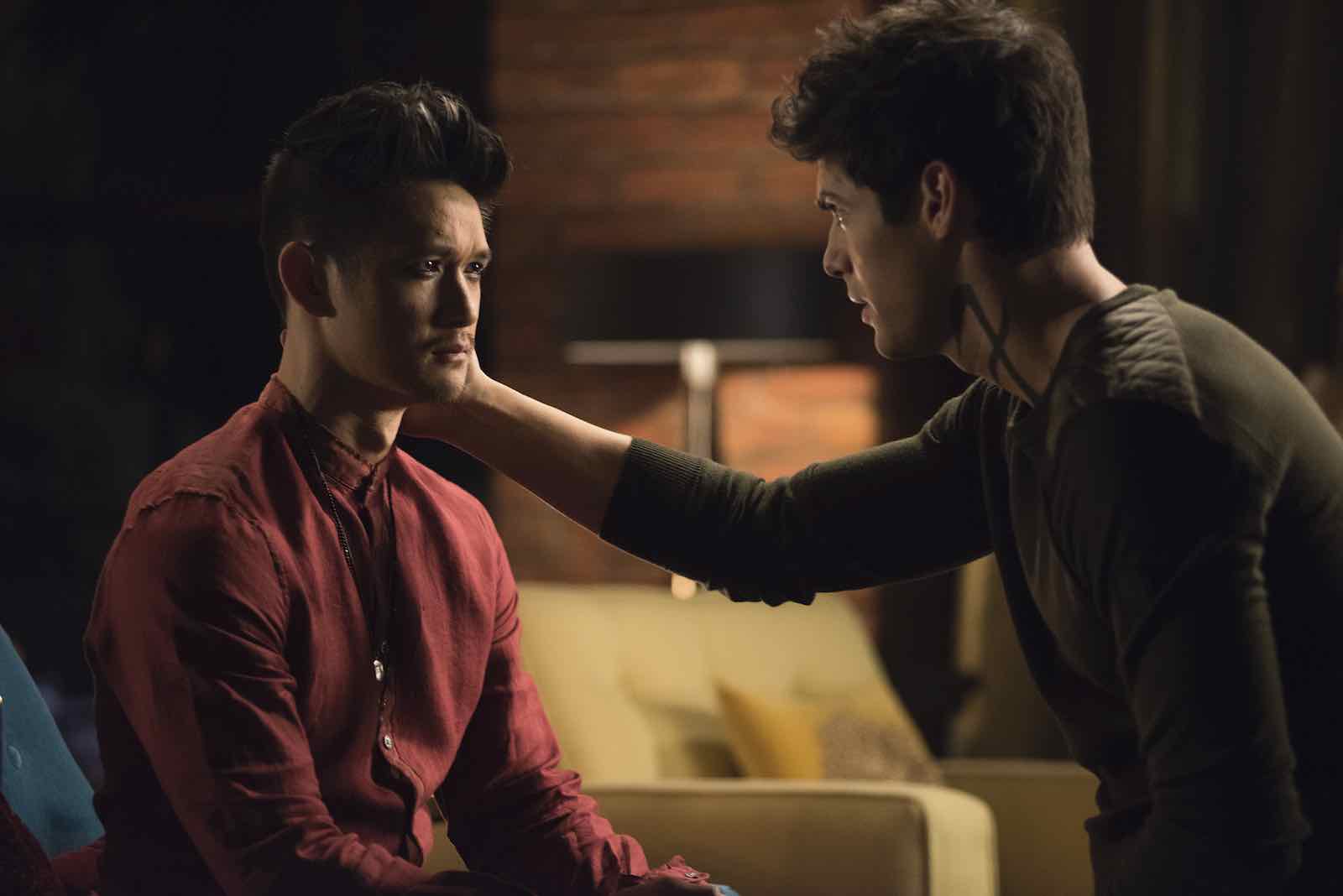 As mentioned, Magnus has lost his powers. Malec are babysitting Madzie for the night, who unceremoniously reminds Magnus that he is now technically a mundane. Knowing that it’s a point of insecurity for Magnus, Alec attempts to comfort him in the best boyfriend way possible.

Alec tries to finish off the moment with a kiss, and although the moment only lasts for a moment, Magnus leans back and denies him. The implication: they’re incapable of sharing a kiss without all their clothes coming off.

“Oh, you know how we get,” spouts Magnus, alluding to the fact that such activity would be inappropriate with young Madzie in the apartment. Even though Magnus is right, the look on Alec’s face is priceless, like a kid robbed of his presents on Christmas morning. The scene is short but keeps us squealing with delight nevertheless. 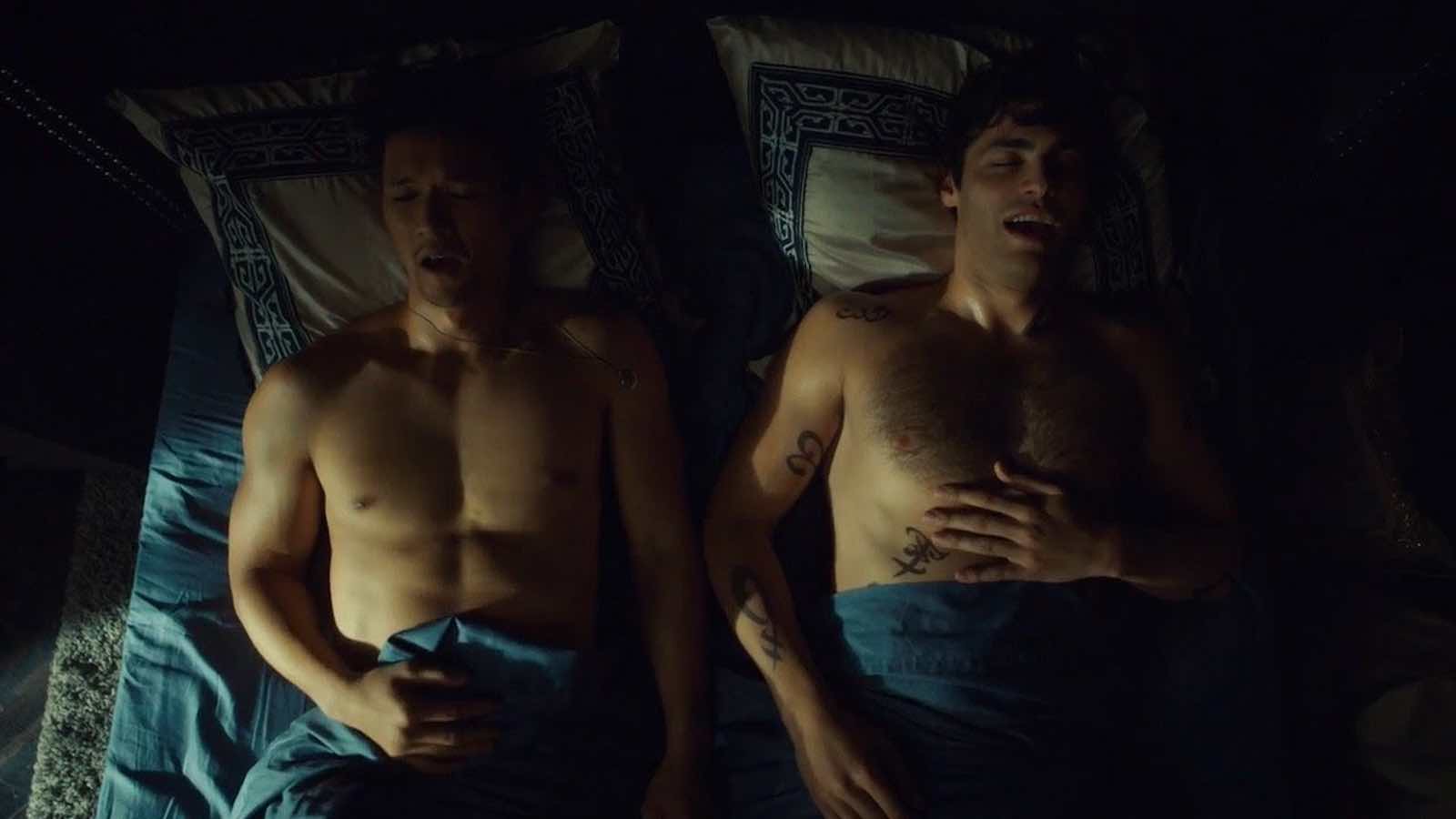 Alec is laying on the bed in his room, barely able to breath or open his eyes, wearing the most satisfied lazy grin possible after what appears to be the end of a very rambunctious sex scene. God help us.

Malec are panting hard as they try to recover from their morning exercise and all we can think about is how we needed a decent hosing off after witnessing it. Anyone else notice just how sweaty Alec is? Fire.

The only reason this scene falls into second place is that Magnus shifts gears pretty quickly by climbing out of bed and getting all serious. Geez, Magnus, just . . . geez. The mood changes from electrified bedroom escapades to sentimental warm fuzzies in seconds. We’re still all about it though: it’s a very close second. 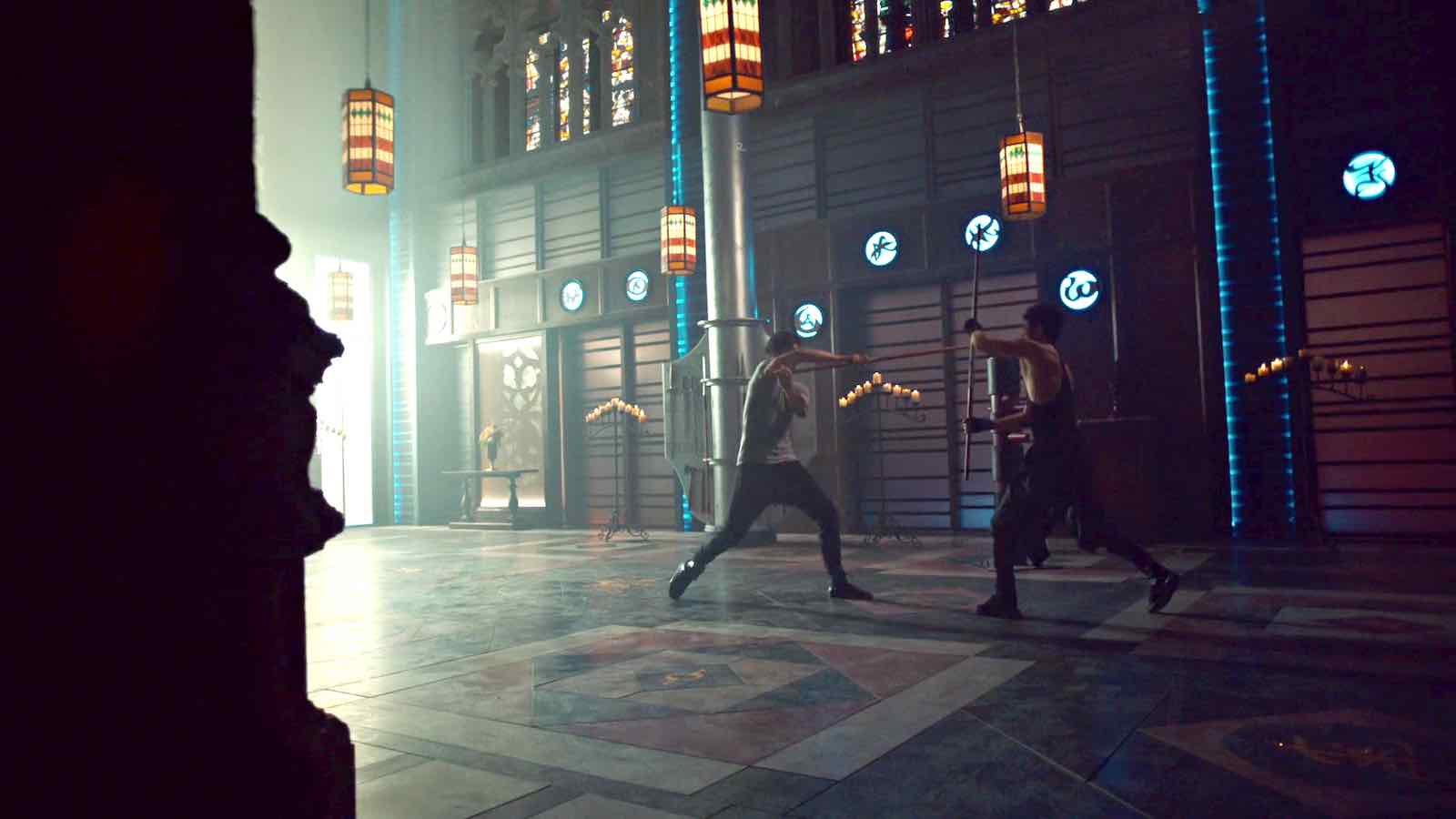 What could be hotter than two of the hottest guys on television getting all sweaty as they roll around and wrestle each other on the floor of the Institute? Not a single thing. Not a single damn thing. Turn on your air conditioners and get those cold showers ready, because watching Magnus goad Alec into one of the sexiest on-screen kisses ever witnessed is nothing short of fire.

It’s the grunting and the panting, and it’s Alec’s sweaty shirt. It’s Magnus flirting from the get-go and those gosh darn battle sticks that have the sexual tension palpitating on overdrive from the onset of the scene. When Alec pushes Magnus up against the wall and goes in for the kill, we almost didn’t live through it. Catch your breath, wipe off your brow, and go watch it again – you won’t regret it. 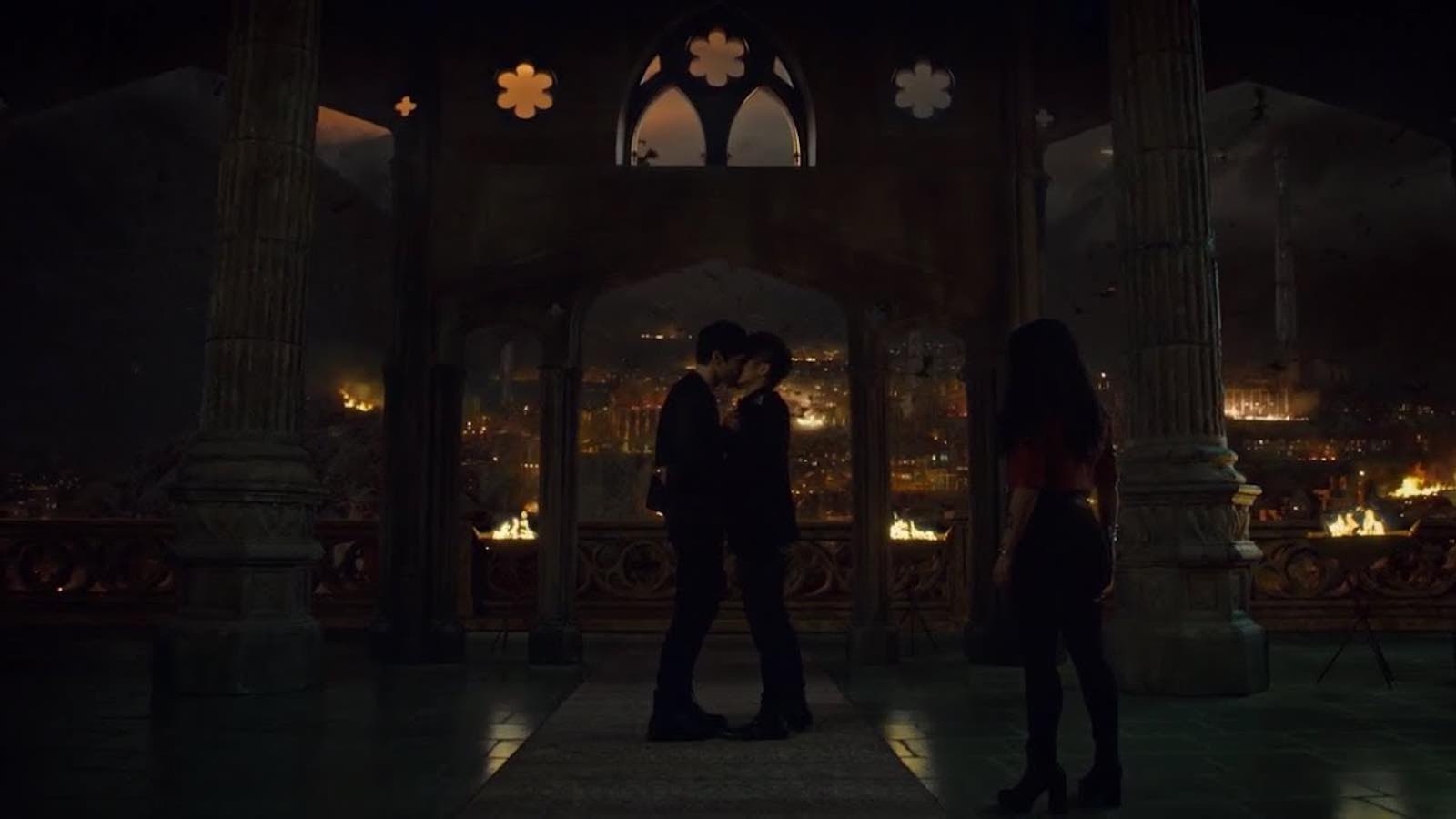 While not exactly steaming and saucy, the Malec proposal and subsequent wedding form the very apex of their story arc and need a place here for their sheer significance and beauty which these moments are afforded. 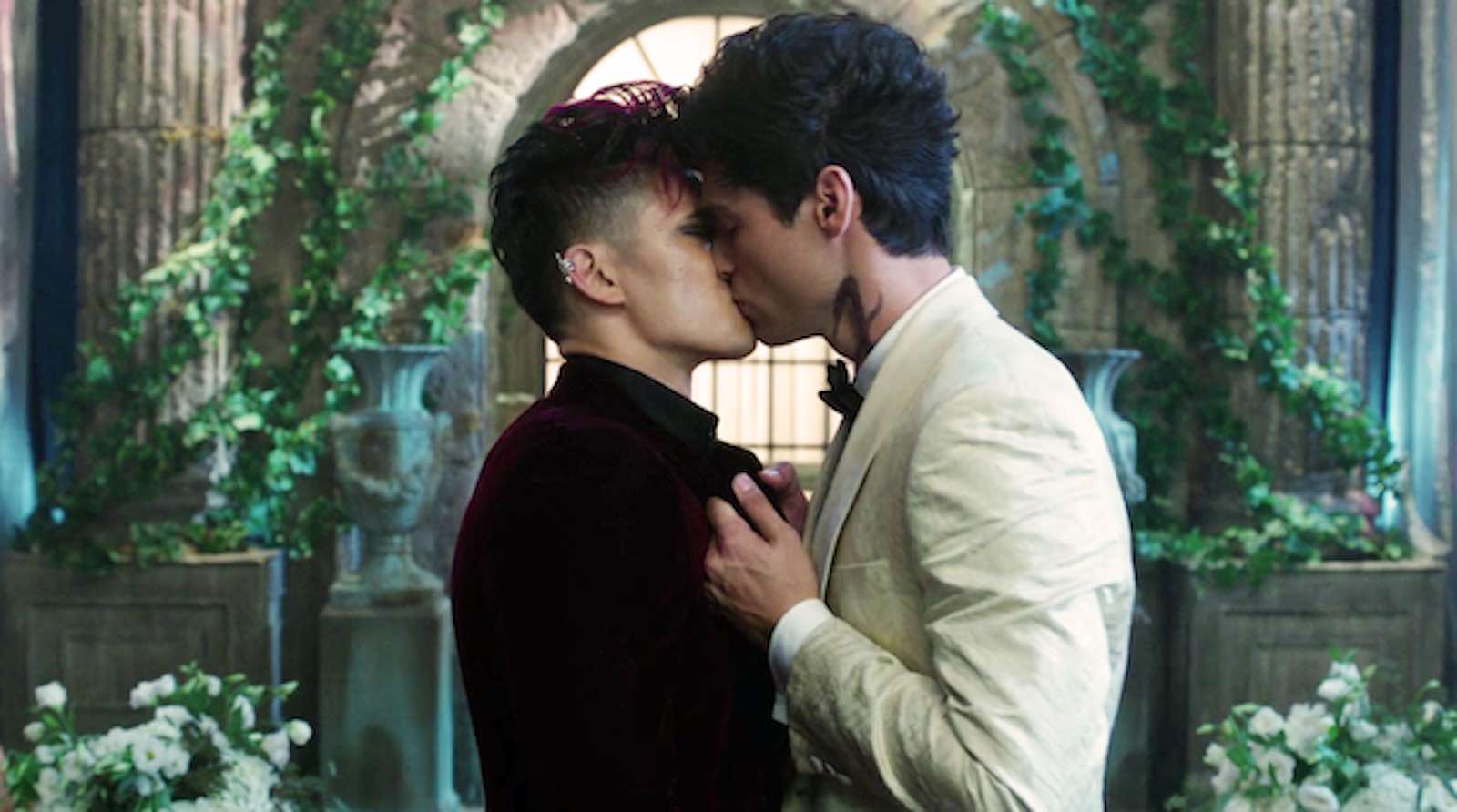 The guys propose to each other like equals should, and both men walk down the aisle. It is an incredible moment in television history, and the scenes are given the same dignity & respect as the trajectory of Malec’s entire relationship.

While these moments won’t have you trying to find a way to cool off, they will leave you in a blubbering mess on the floor, desperately needing Kleenex. What a perfect way to end an epic series that impacted the lives of so many people.

‘Shadowhunters’: Every time Freeform put a massive gulf between Malec