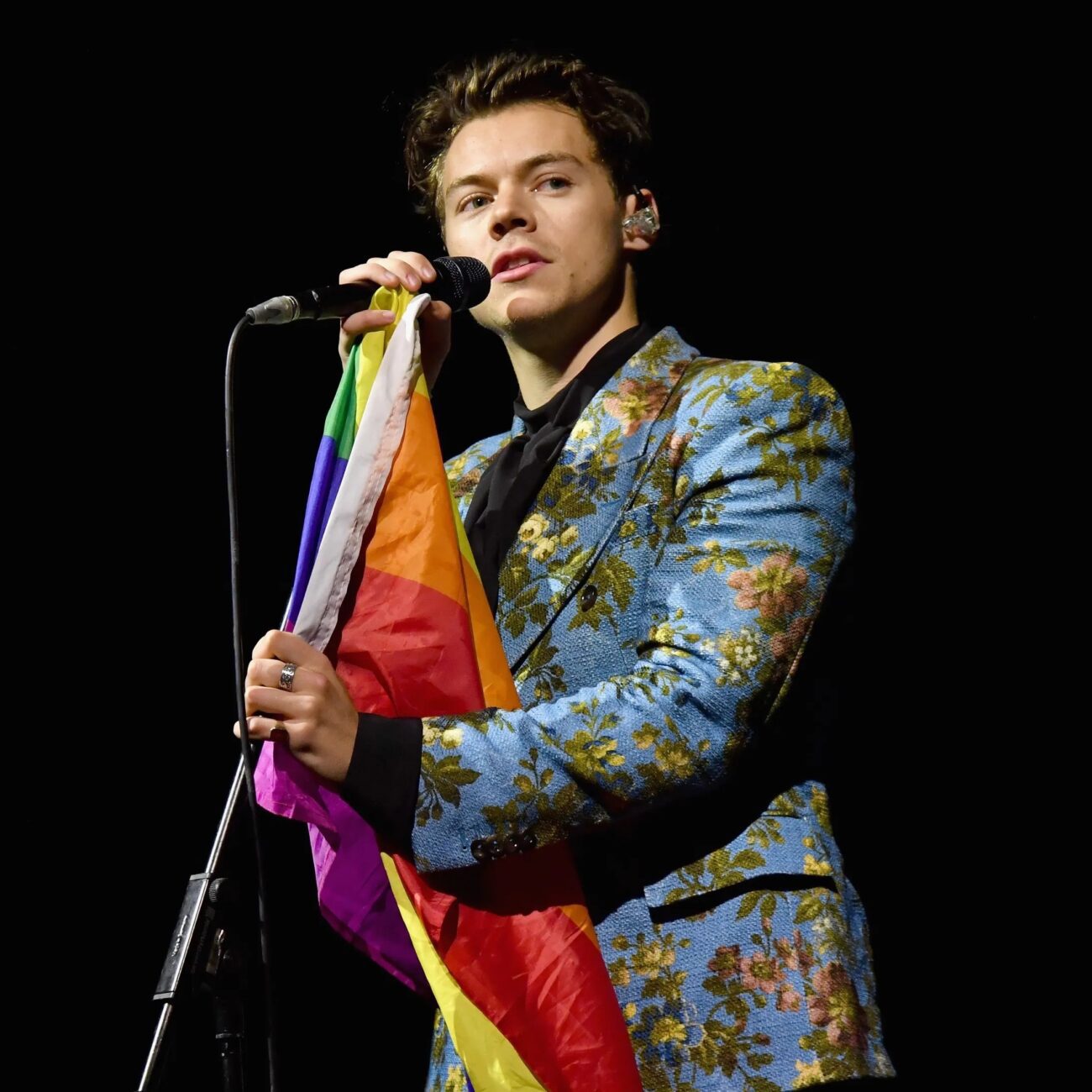 Many fans are thrilled to learn heartthrob Harry Styles is single once again. After privately dating for nearly two years, the singer has parted ways from Olivia Wilde. There are many theories why the couple has split including rumors circulating social media that the former One Direction bandmate is gay. 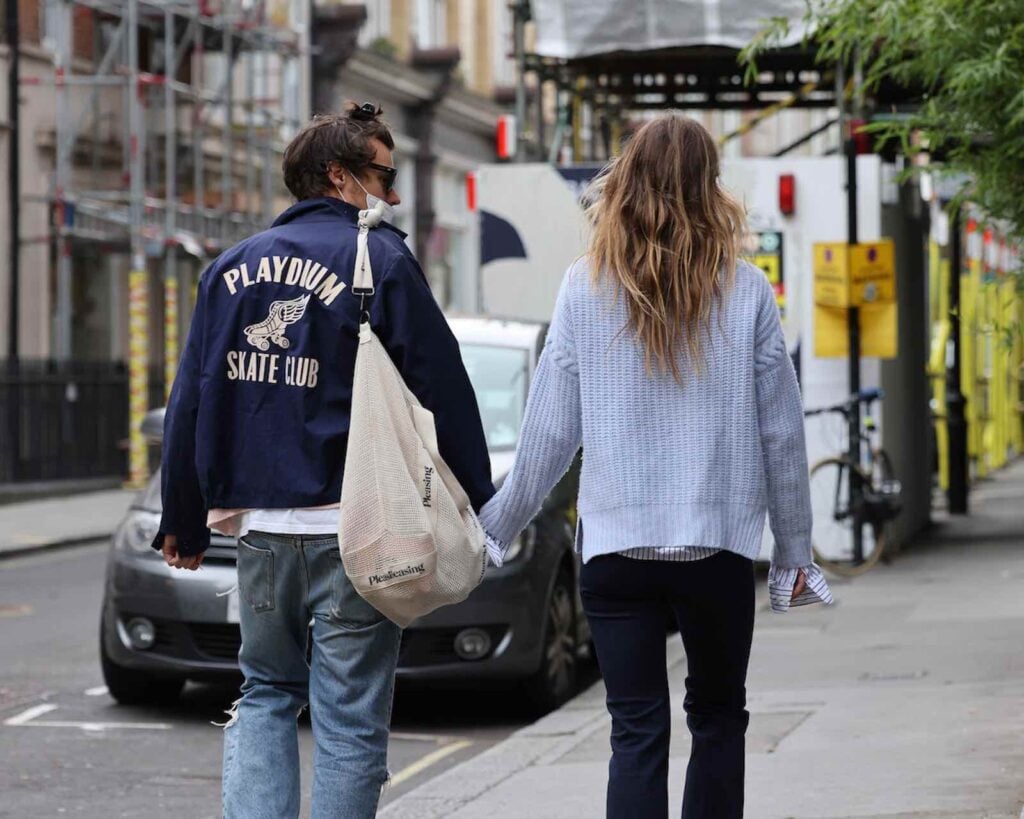 Harry Styles established his career in 2010 when he joined the famous boyband One Direction during the UK singing competition X Factor. Ever since he found fame, he’s been linked to numerous women including Kendall Jenner, Taylor Swift, and Camille Rowe. Whenever Styles is romantically involved with anyone the fandom goes wild . . . or should we say, Wilde.

Olivia Wilde first mentioned Harry Styles back in September 2020 when he was cast in Wilde’s second directorial role for Don’t Worry Darling. He was set to replace Shia LaBeouf following allegations made by his ex-girlfriend FKA Twigs.

Filming began the following month and in November, Wilde spoke about how Arianne Phillips and herself initially learned about Styles’ accepting the role. “She [Arianne] and I did a little victory dance when we heard that we officially had Harry in the film, because we knew that he has a real appreciation for fashion and style,” Wilde told Vogue. 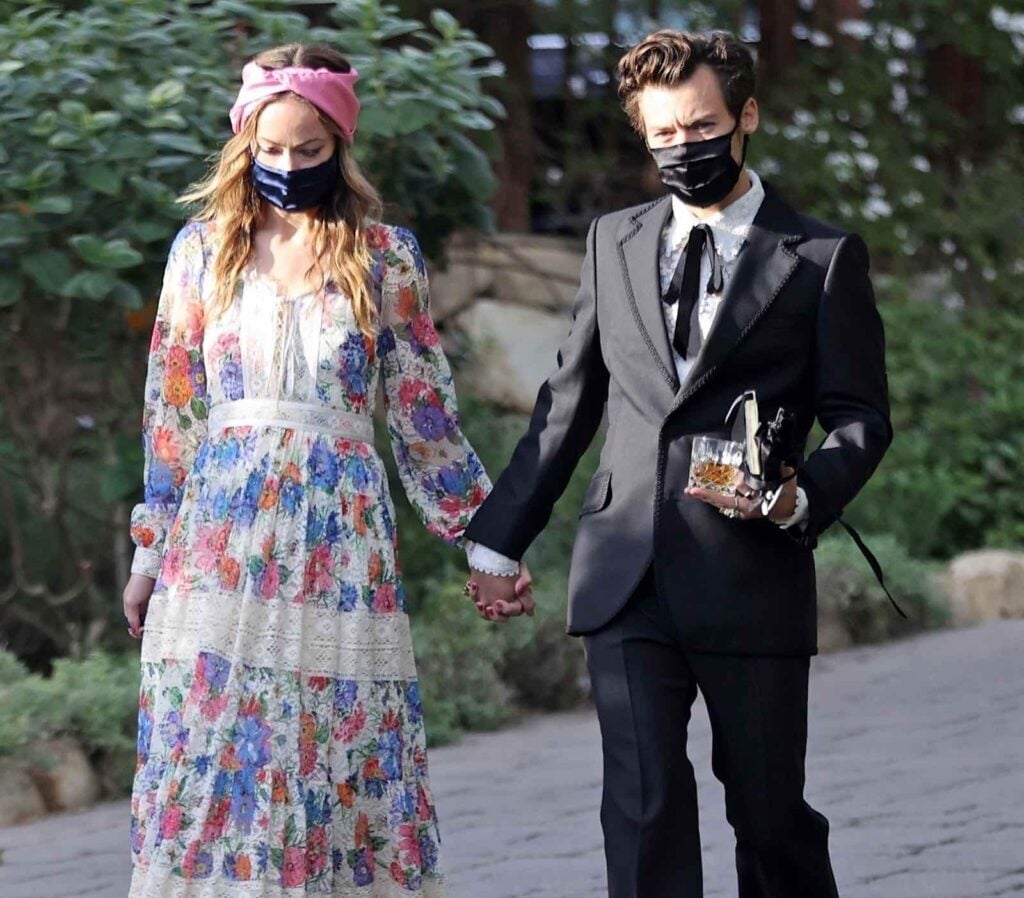 It wasn’t until January 2021 when Olivia Wilde & Harry Styles confirmed their romance when they attended his manager Jeffrey Azoff’s wedding. “They were in Montecito, California this weekend for a wedding. They were affectionate around their friends, held hands, and looked very happy. They have dated for a few weeks,” a report from People stated.

In an interview released by Variety, Wilde spoke about her private relationship with Styles. “I’m not going to say anything about it because I’ve never seen a relationship benefit from being dragged into the public arena. We both go out of our way to protect our relationship; I think it’s out of experience, but also just out of deep love.” 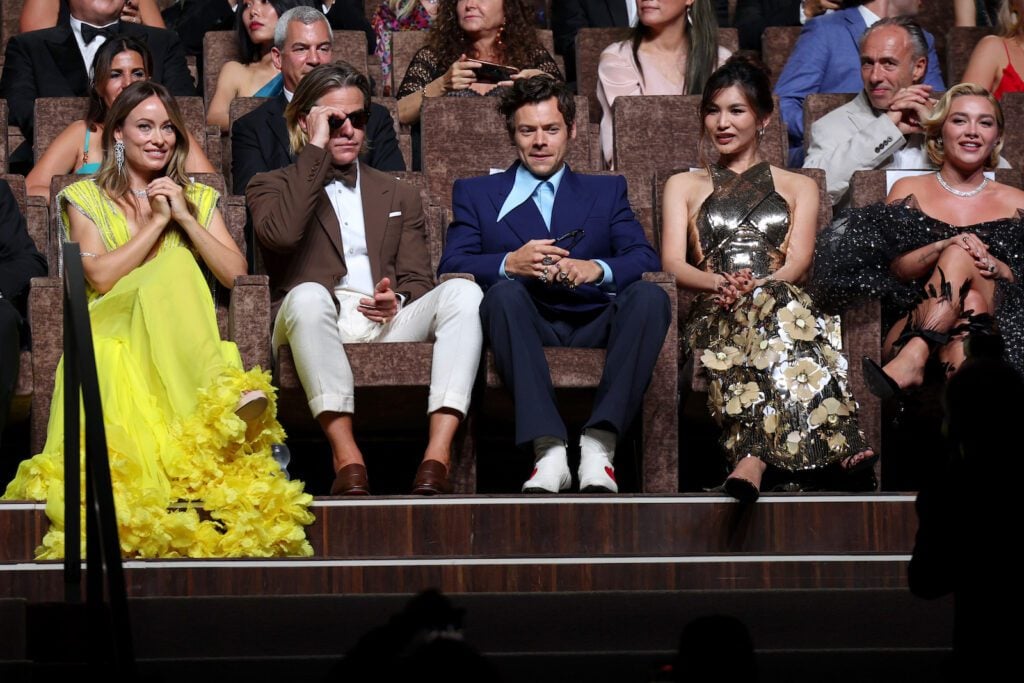 Fans were quick to suggest the pair had been forced together for publicity surrounding Don’t Worry Darling. It’s not a farfetched comment though since a lot of the Don’t Worry Darling media attention has come from controversy. At the Venice Film Festival alone, we had spitting, walkouts, and shady IG posts.

This follows a variety of articles about Olivia Wilde’s previous relationship with Jason Sudeikis who she shares two children with. Wilde was even served papers onstage at CinemaCon in Las Vegas. In court documents obtained by the Daily Mail, the actress and director accused Sudeikis of “embarrass(ing) me professionally” and said his method of delivery was “aggressive.”

“Jason’s actions were clearly intended to threaten me and catch me off guard. He could have served me discreetly, but instead, he chose to serve me in the most aggressive manner possible,” Wilde said in her court filing. 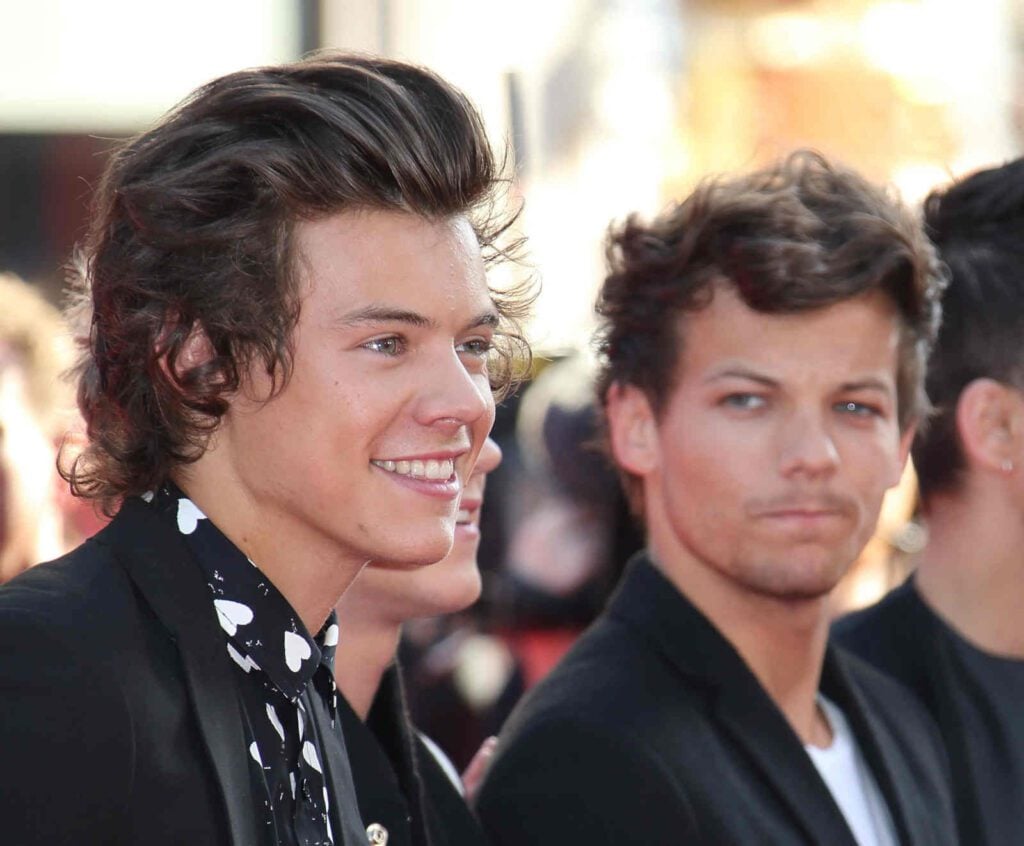 A big theory is that Harry Styles is actually hiding a secret. Fans and the public have begun to speculate whether or not the superstar is gay. These comments aren’t new. Throughout his career, fans have been trying to find evidence of a gay relationship between him and former bandmate Louis Tomlinson. (Otherwise known as Larry Stylinson).

The 28-year-old has been candid about his sexuality after years of mystery. In an interview with Rolling Stone, he said, “I’ve never talked about my life away from work publicly and found that it’s benefited me positively. There’s always going to be a version of a narrative, and I think I just decided I wasn’t going to spend the time trying to correct it or redirect it in some way.” 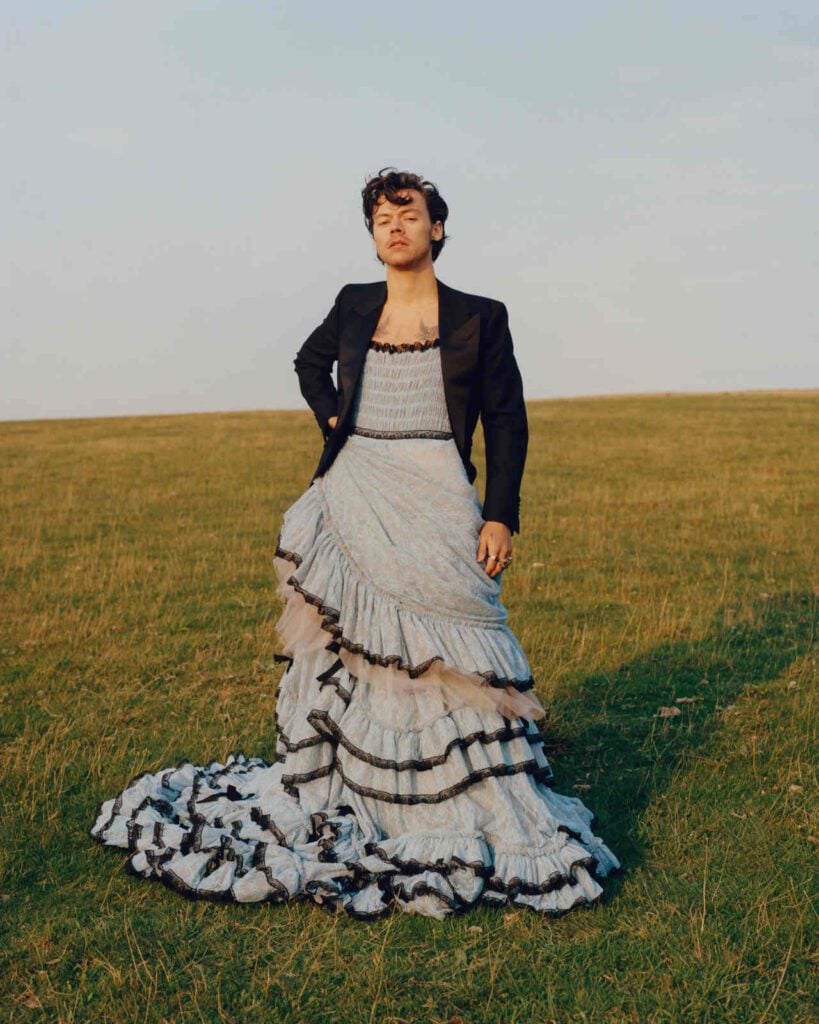 “Sometimes people say, ‘You’ve only publicly been with women,’ and I don’t think I’ve publicly been with anyone. If someone takes a picture of you with someone, it doesn’t mean you’re choosing to have a public relationship or something,” he said.

After his public breakup with Olivia Wilde, we’re left wondering if someone else is in the picture. Will he finally date a man publicly?