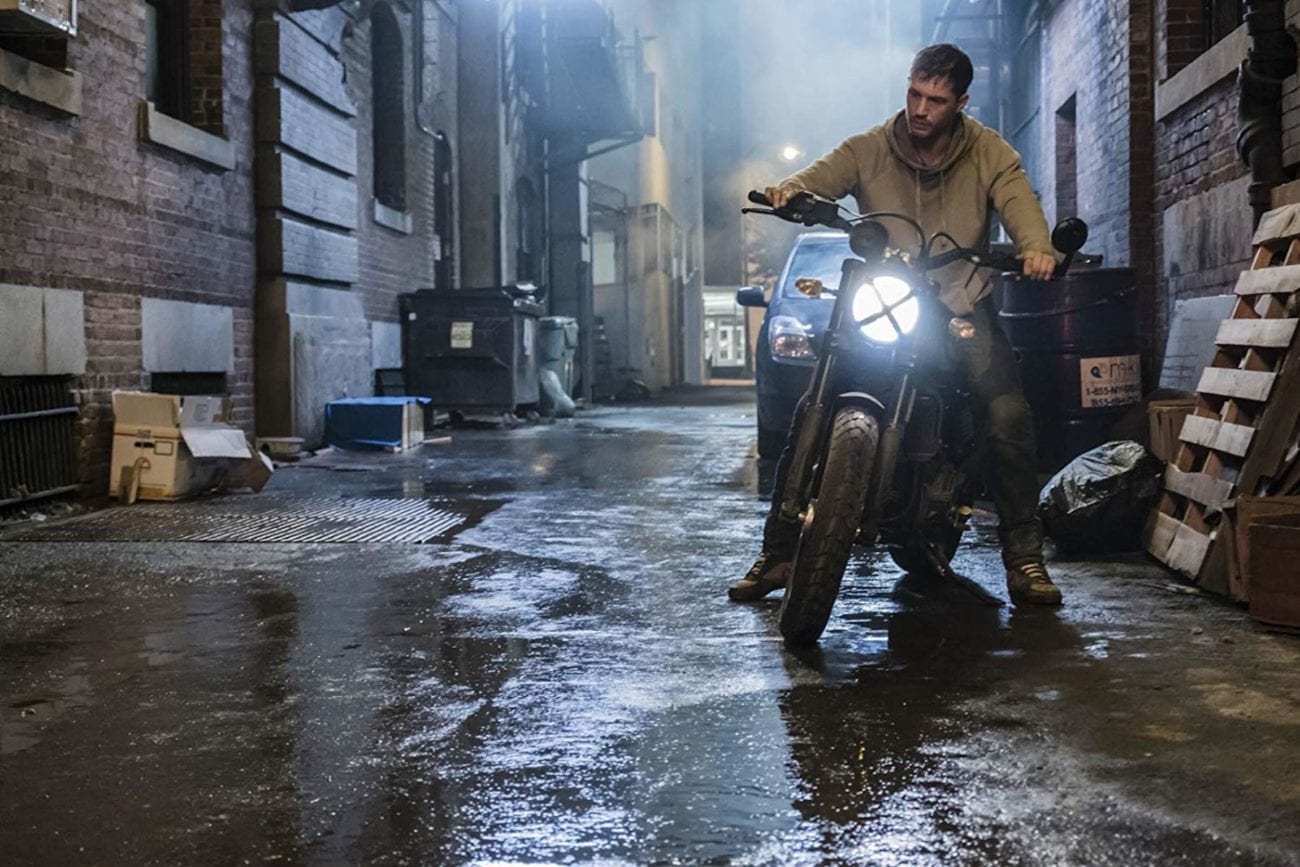 Tom Hardy gets sloppy: Everything wrong with the new ‘Venom’ trailer

We never thought we’d say this, but we may have lost our boner for Tom Hardy. It isn’t all his fault, exactly. In fact, we’re confident (for the most part) to throw the blame elsewhere – most specifically at the latest trailer for Venom.

Like the half-symbiote half-human antihero the actor depicts, the trailer doesn’t seem able to settle on one diacritic voice.

At some points it wants to look dark and edgy, at others like a goofball comedy with a monstrous edge. It seems to edge toward Saturday morning cartoon before lurching into a twitchy nu-metal music video from the early 00s.

The trailer is thick with cringe. It makes us wish Sony Pictures had some symbiote goo of their own to throw at this thing in order to bond all its components together.

Let’s talk about that symbiote black goo, because the effects showcased in this new Venom trailer are looking cheap and nasty.

There’s a fluidity to them that works – but there’s also a tawdry shine that makes Venom look more like a PVC fetishist than Marvel’s most enigmatic antihero.

In the moments where the goo takes over various human bodies, it looks like a barrel of Nickelodeon Gak (‘member that?) had sex with a tub of liquorice to result in this unloved slop oozing out afterwards.

But it isn’t just the cheap effects that have us confounded about the trailer. We’re also disappointed Hardy has dusted off one of his three favorite movie “accents” (alongside Cockney scoundrel & mumbling macho man) to play Eddie Brock.

The character sounds like Tommy Conlon from the emotional dude-bro classic Warrior – if he was a champion in the art of whining rather than mixed martial arts.

Hardy also sounds nearly identical to adorable dog fanatic Bob from crime drama The Drop, if the character had spent the previous 48 hours at a nonstop Christopher Walken movie marathon.

In fact, hit the trailer at the 0:20 mark and you’ll hear an uncanny impression of Walken’s signature high-to-low cadence – the kind every Hollywood actor over the age of 30 has reeled out by this point on whatever Saturday night chat show while relaying a zany anecdote about the actor.

Our biggest disappointment of all may be reserved for how unfuckable we find Venom to be now. (Sadly, we’re only half joking). Back in April when the previous trailer for the film was dropped, thirsty deviants across the internet slobbered all over the gross but strangely appealing sexual potential of the alien symbiote.

They shrieked with palpable passion for the obvious sexual advantages of the creature’s impossibly long tongue and mused that he’s a “bad boy type” you’d get with, but wouldn’t commit to: “That’s when you’re purely monsterfucking and that’s it”, as one horndog mused on Twitter.

But that was back when Venom had an air of mystery to him. Now he’s licking people’s faces while talking about there being “so many snacks” for him to enjoy (not sexy ones) and suggesting he’s going to turn a dude into something resembling “a turd in the wind” by eating the poor bastard’s face and limbs.

Recently, Hardy told Entertainment Weekly “there’s a tragic clown element” to the character that drew him to the role. “There’s something funny about the circumstances of having a gift, but it’s a tragic gift.”

Hardy also divulged he has some interesting points of inspiration for the dual roles of his performance. “It’s a bit like Ren and Stimpy, you know? They have different sounds. I always saw Venom as sounding like a James Brown lounge lizard, and Eddie Brock is . . . an everyday kind of guy.”

That could help to explain the tonal issues at work in the trailer. Hardy seems to be playing out some delirious cartoonish fantasy in the role, and honestly we’re not all that mad at his approach – this is a comic book movie after all, and Ren and Stimpy is the bomb.

We just wish the whole trailer went all-in on keeping up with Hardy’s weird-ass Ren and Stimpy goofball energy and drop the determination to be some serious, chin-stroking prestige cinema.

Cast all the Oscar nominees you want (including Michelle Williams – barely featured in the trailer) – Venom should stick to that Saturday morning cartoon vibe this trailer seems so eager to play down.

Maybe then the cheap effects of the symbiote goo will look like less of a mess and more of a conspicuous effort to bring cartoonish japes into a live-action movie. Then we could all just sit back and enjoy this film for being the brainless popcorn fodder we hope it will be.