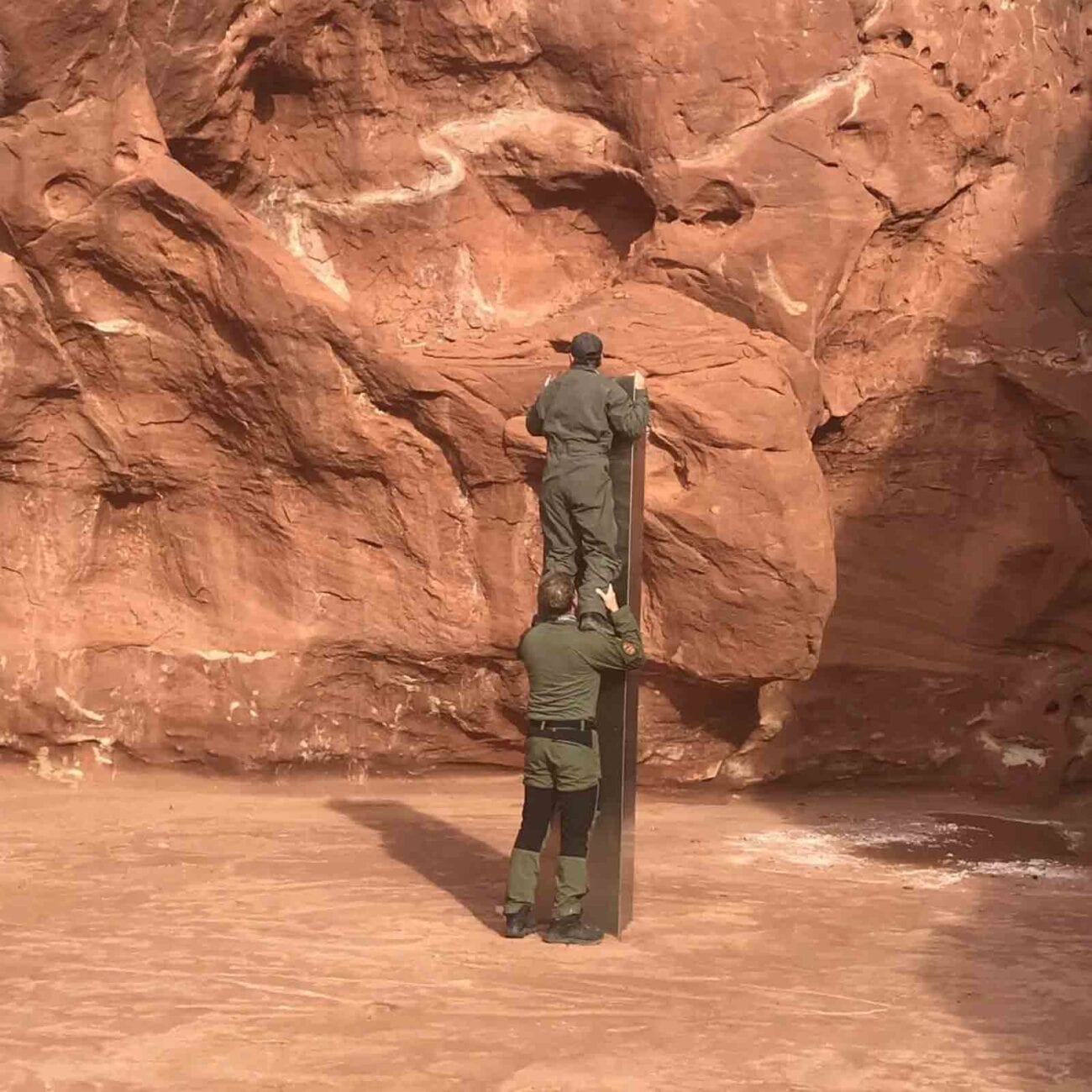 Does this mysterious monolith in Utah prove UFOs are real?

It was a routine day for a team of officers in the Utah Department of Public Safety’s Aero Bureau. They had flown out to the desert in a helicopter to count the bighorn sheep population. The helicopter was flying fairly low so that the biologists could ascertain the gender of the individual animals.

Then the day got unusual when one of the men in the helicopter shouted, “Whoa, whoa, whoa, turn around, turn around!” He insisted that something strange was down on the ground and they needed to investigate it. So they did.

What the group found was a strange metal monolith in a very hard to reach place. The object is approximately 10 to 12 feet tall, shiny stainless steel, and held together by rivets. What’s extra strange is that the monolith is stuck in hard stone ground – they would have had to cut the stone to wedge the monolith in there. Right now, nobody knows how deep it goes.

'Who Does This Kind of Stuff?' Mystery Metal Monolith Discovered in Utah Desert. via @Storyful pic.twitter.com/LNNUccFORQ

The men who found the monolith took video footage of their find. As the men climb down to the three-sided pillar they joke about being intrepid explorers investigating an “alien life form”. With their green jumpsuits it almost feels like a fan-made Stargate spin-off.

The men marvel at the weird object and the man recording even asks while laughing “Who does this kind of stuff?” Who indeed?

“We were kind of joking around that if one of us suddenly disappears, then the rest of us make a run for it,” said Bret Hutchings, one of the men there that day. 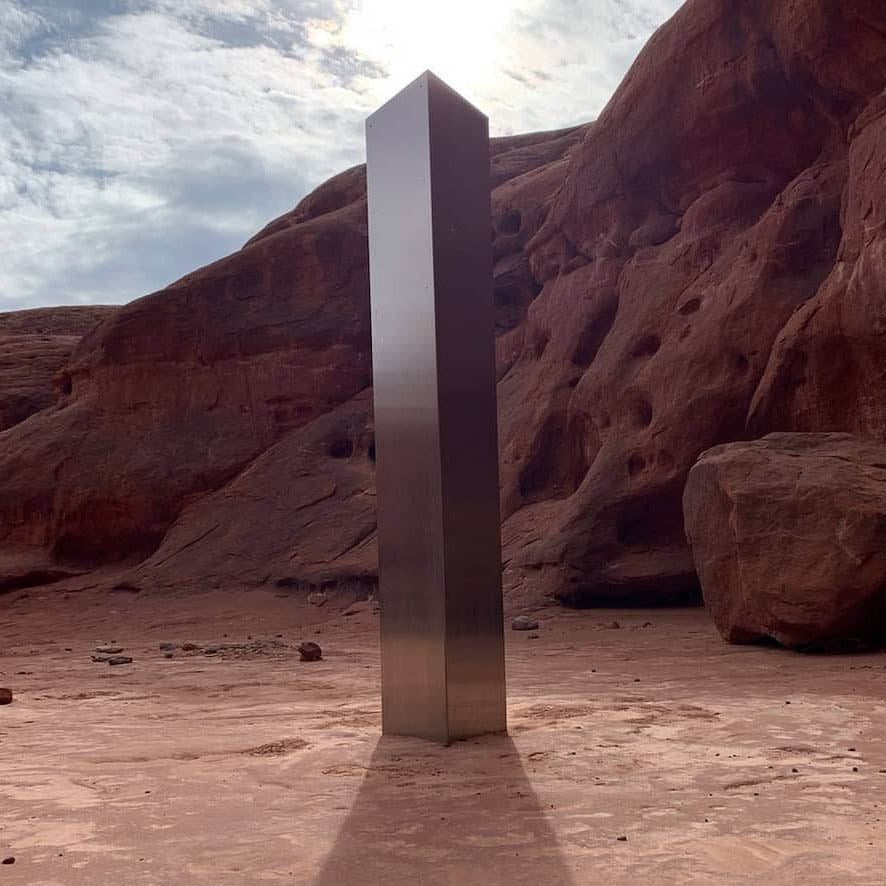 Nobody is certain where this monolith came from, though right now the running theory is that it’s an art installation. Everyone readily admits that it seems a bit strange to make the trek to this very specific spot in order to do something rather difficult and then leave it without telling anyone about it. However, 2020 has taught us weirder things happen all the time – especially when humans are involved.

The land this monolith was installed on is public land, which means if they ever do find out who put this there they could actually be in a bit of legal trouble. So the artist – if it was an artist who did this – is probably better off remaining anonymous.

Why would an artist do this? It certainly seems weird, but it wasn’t lost on everyone how much the video felt like a parallel universe version of the most famous scene in 2001: A Space Odyssey. It could be that this viral video is exactly what the artist was hoping for. 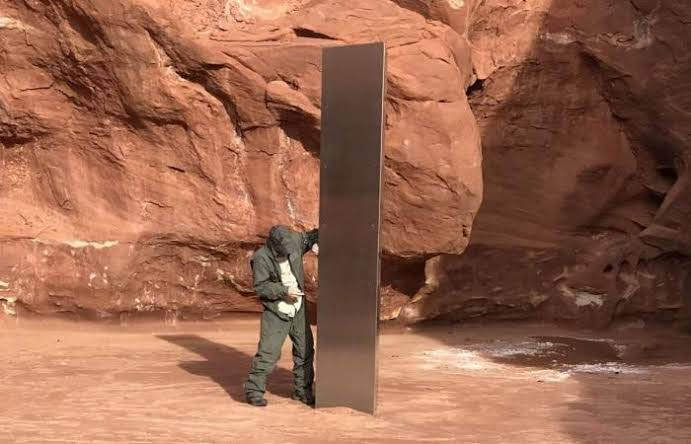 While everyone is trying their darndest to get themselves to believe this is just a weird human thing, for some reason everyone can’t help but ask if this is some kind of odd first-contact with real aliens. We’ve all seen enough UFO movies to know this is exactly how they start.

In fact, the sci-fi book An Absolutely Remarkable Thing literally opens with a woman finding what she thinks is a weird art installation, making a video that goes viral, and then finding out that the art was actually from real aliens and UFOs. So . . . that’s weird.

Honestly, finding out aliens are real and have a penchant for sticking metal pillars in the ground would seem like a fitting end to 2020. The specific location of the monolith hasn’t been revealed, because officials are worried people might get hurt trying to get to the semi-dangerous location.

So, what do you think? Did aliens or UFOs put the monolith there? Or do you think this is some funky art installation? Let us know in the comments below, because we’re still on the fence.