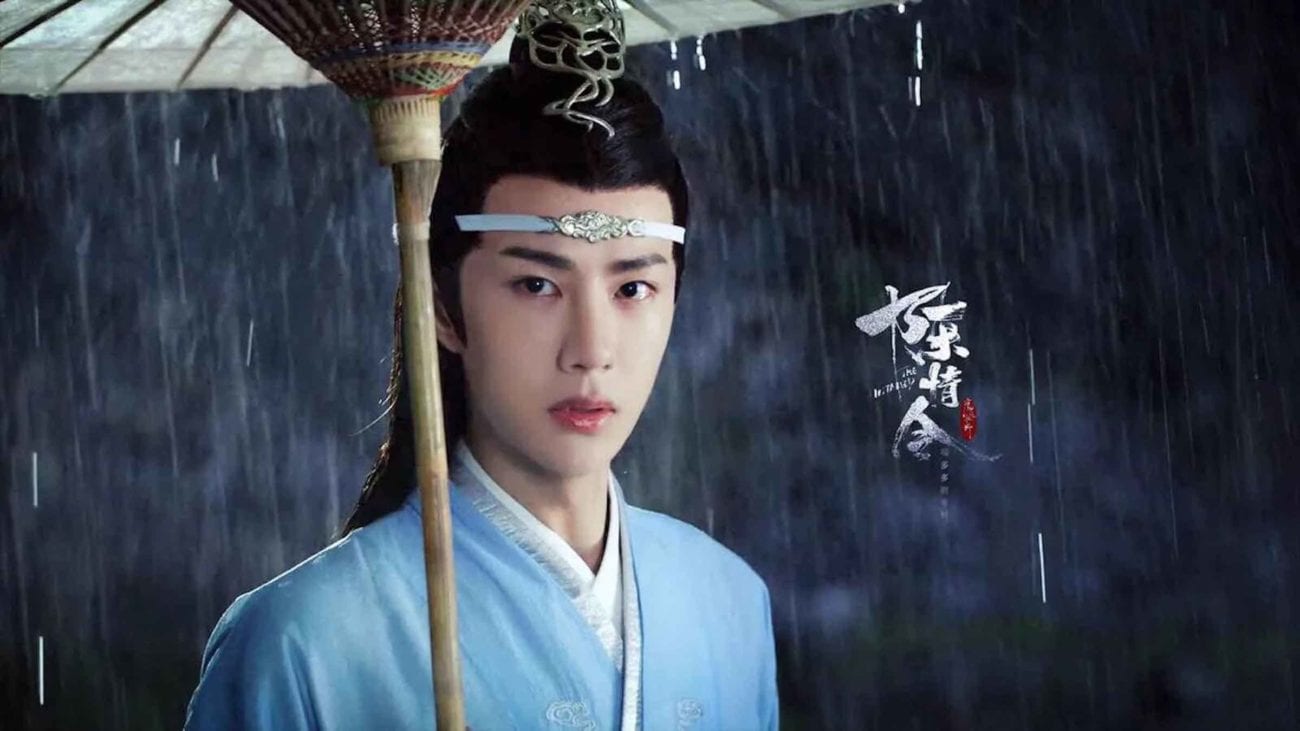 ‘The Untamed’: Lan Wangji and his sacred headband

The depiction of homosexuality on television in China is currently highly censored. In order to ensure The Untamed could make it onto screens, and stay on screens, the creators of the show had to use all kinds of creative strategies to convey the relationship between Lan Wangji & Wei Wuxian in non-conventional ways.

They used many symbols & created many motifs throughout the show to accomplish this. Many were lifted directly from the source material, Mo Dao Zu Shi, written by Mo Xiang Tong Xiu, and some were the handiwork of the creators of the show. 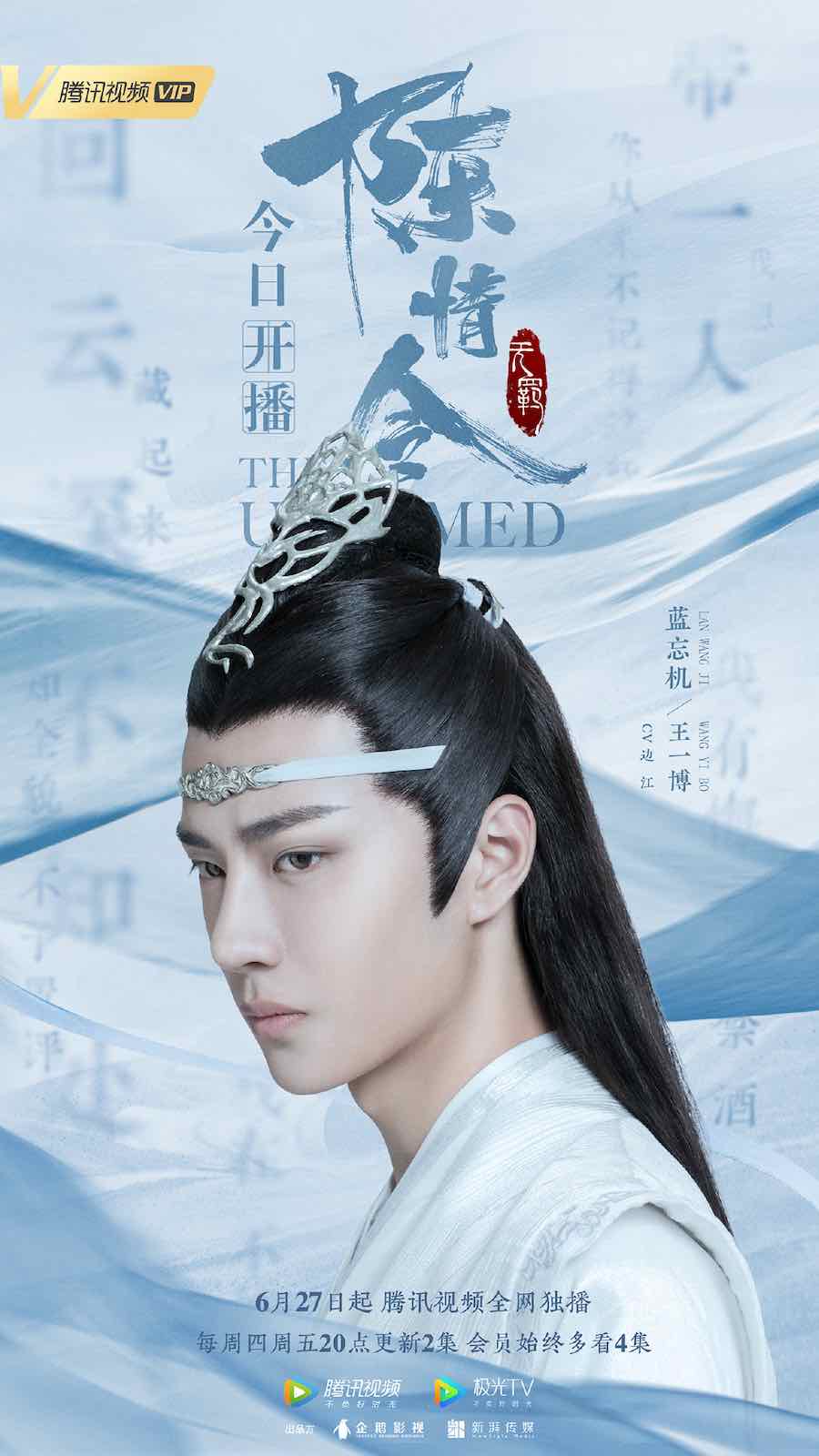 The symbolism of Lan Wangji’s headband is prominently featured in both the source material & the show. The Lan clan all wear sacred headbands which are a daily reminder to the wearer to “regulate oneself”: a clear principle the Lan clan lives by.

No one is allowed to touch the headband except the wearer, their significant other, or any children they may have. This becomes a point of controversy at several points in the story. Lan Wangji allows Wei Wuxian to touch and use his headband more than once throughout the show, signifying that the two are, in fact, significant others.

So come with us as we unpack all the moments that Lan Wangji let Wei Wuxian touch his sacred headband!

Episode 6 – Under the Cold Pond

In this episode, Lan Wangji is drunk and hauled up in Wei Wuxian’s room. Wei Wuxian learns pretty quickly that Lan Wangji can’t hold his liquor and lays the boy down to rest on his bed. Wei Wuxian notices that Lan Wangji’s headband is crooked and reaches out to fix it for him. Lan Wangji swats his hand away twice and says that no one except significant others and offspring can touch the sacred headband.

About thirty minutes later in the episode, the two boys find themselves in quite a pickle, trapped underneath the Cold Pond at the back of Cloud Recesses. Even Lan Wangji, who has lived at Cloud Recesses his whole life, is surprised to learn of this secret location. At the back of the cave is a guqin. Lan Wangji identifies it as a sacred relic of the Lan Clan. 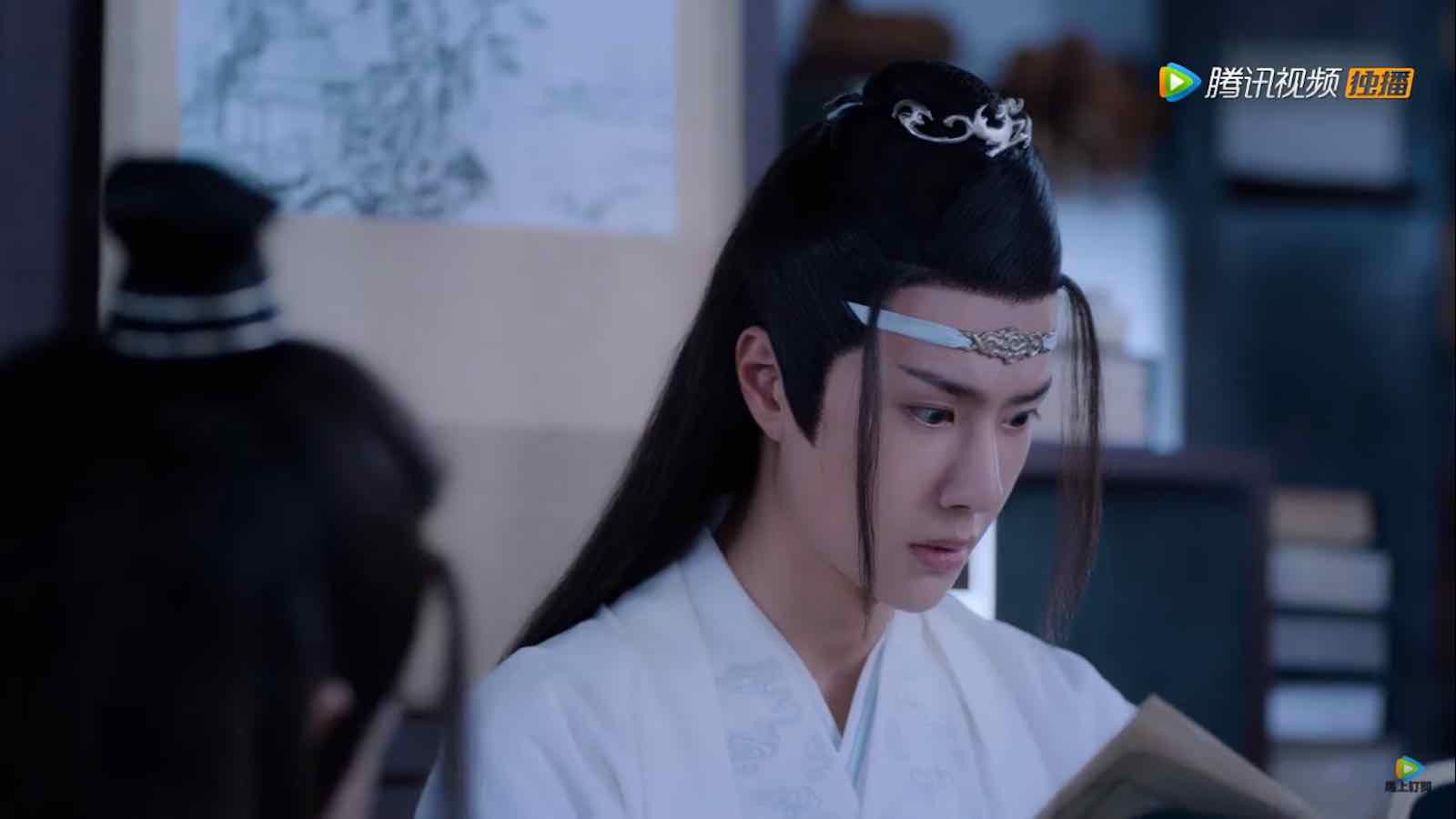 As the guqin begins attacking Wei Wuxian, because he is not a member of the Lan clan, Wei Wuxian suggests that Lan Wangji use his headband ribbon to bind him to Lan Wangji as a method of protection. If he uses the headband to bind Wei Wuxian to himself, the instrument will recognize Wei Wuxian as Lan Wangji’s partner, and therefore an extension of the Lan clan.

Censorship be damned, Lan Wangji does not hesitate! Within seconds Lan Wangji is removing his headband and tying his hands together with Wei Wuxian’s. The two boys stand before Lan Yi, one of the Lan clan’s most revered elders, hands bound together by the headband.

This was the first time that Lan Wangji used the symbolism of his headband to convey the relationship between the two boys. Although at this point in the story arc, even though neither Wei Wuxian or Lan Wangji really understands what is happening between them, this is a moment of very clear foreshadowing of what is to come. 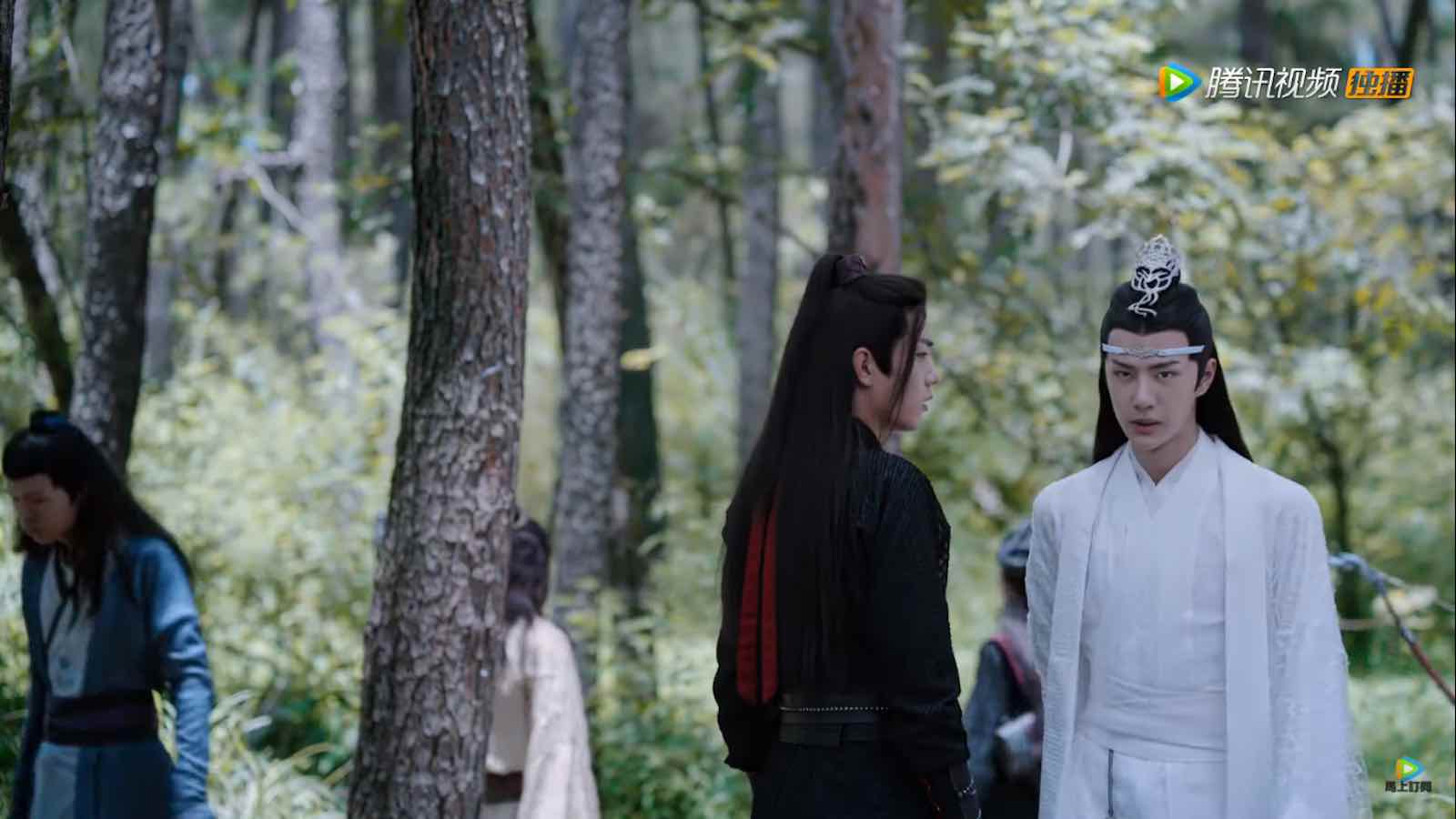 At the end of this episode, Lan Wangji & Wei Wuxian find themselves alone in Turtle Cave after the rest of their crew escaped. Lan Wangji’s leg is seriously injured and Wei Wuxian attempts to make a stint with sticks he finds in the cave. He asks Lan Wangji if he has a rope to tie them together, and his eyes fall on the sacred headband once again.

He grabs for the headband without hesitation. Lan Wangji’s eyes say don’t touch, but Wei Wuxian ignores him, telling him that in such a time he shouldn’t be so pedantic about the whole thing. Lan Wangji is clearly suffering & simply allows Wei Wuxian to do whatever he wants with the headband. 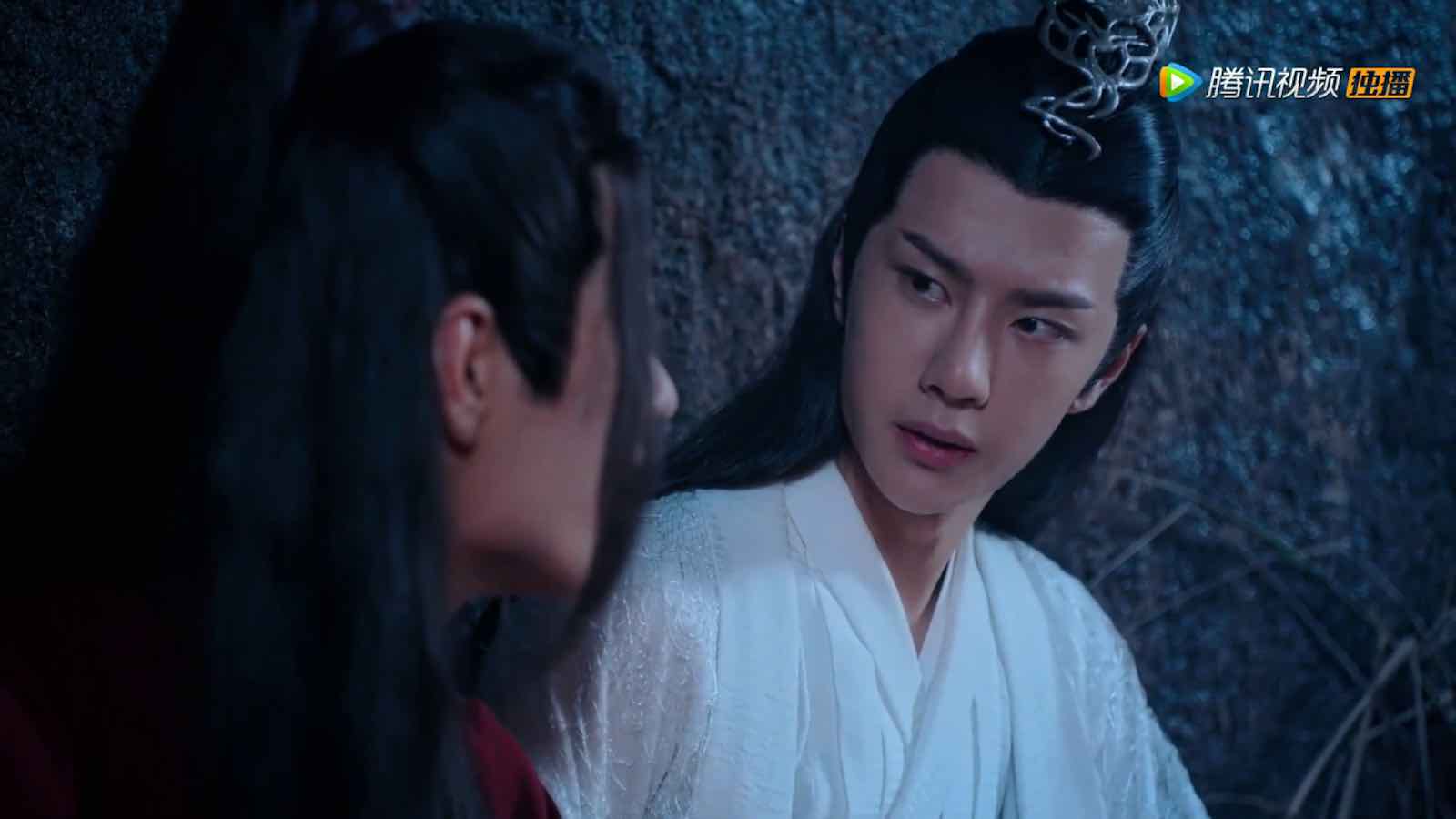 After this, in a moment of sheer hilarity, Wei Wuxian begins de-robing in an attempt to insight panic in Lan Wangji. He seems to understand that something so improper would cause Lan Wangji to have a big enough emotional reaction that he would vomit up all the stale blood circulating in his system. Mission accomplished.

After Lan Wangji goes to sleep, he wakes up at the beginning of episode 14 to find that Wei Wuxian had wrapped the headband back around Lan Wangji’s forehead. Wei Wuxian softly says he knew it Lan Wangji would feel anxious without the headband, so he put it right back where it should be. Lan Wangji says nothing, but it’s clear from his expression that he’s grateful. Sigh. 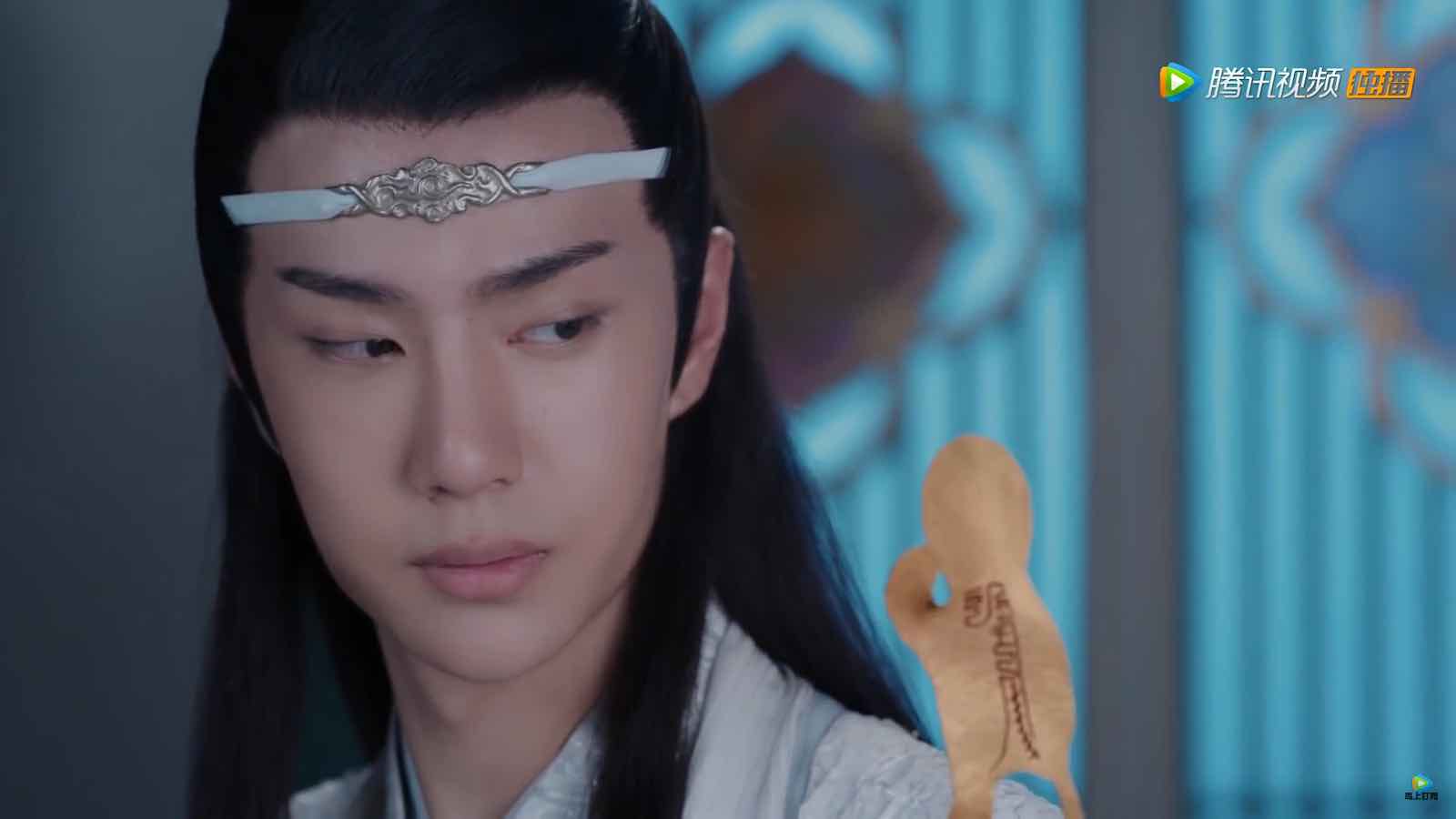 It is quite some time before Wei Wuxian attempts to touch Lan Wangji’s headband again. In episode 40, Lan Wangji and Wei Wuxian are seated at a table together preparing for Wei Wuxian’s spirit to enter one of his paper talismans. His task? The talisman will enter Meng Yao’s (Zhu Zan Jin) private chambers, looking for the clues they seek about Nie Ming Jue’s (Wang Yi Zhou) head. 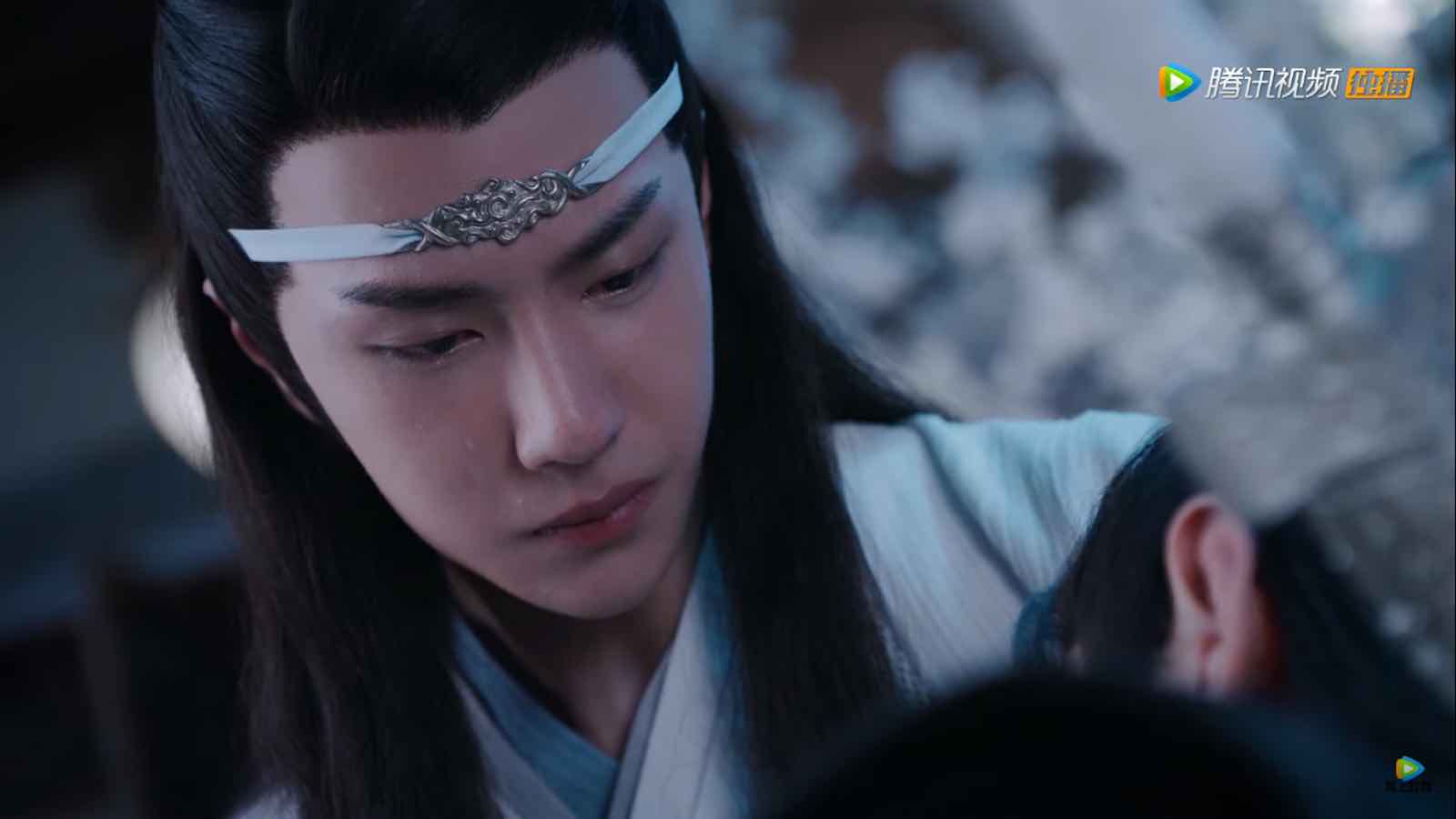 The last time Wei Wuxian used a paper talisman to get Lan Wangji’s attention, Lan Wangji crumpled it up and tossed it aside. That was back when the two boys were teenagers, dancing around each other trying to work out what their feelings were. This time, there is no doubt: these two definitely love each other.

Unlike previous times when Wei Wuxian grabbed for the headband, Lan Wangji didn’t even flinch when the talisman flirtatiously gave it a good ole’ tug this time. Although they’re unable to say the words due to censorship, the symbolism is clear here: Lan Wangji considers Wei Wuxian his significant other.

In the scenes that follow this one, Lan Wangji & Wei Wuxian have a very public moment where they exchange their feelings for each other. The symbolism of the headband becomes unnecessary for plot development, as they make it clear to each other ( and everyone else) what they mean to each other. This is the last time the headband is used in the series to convey this concept.