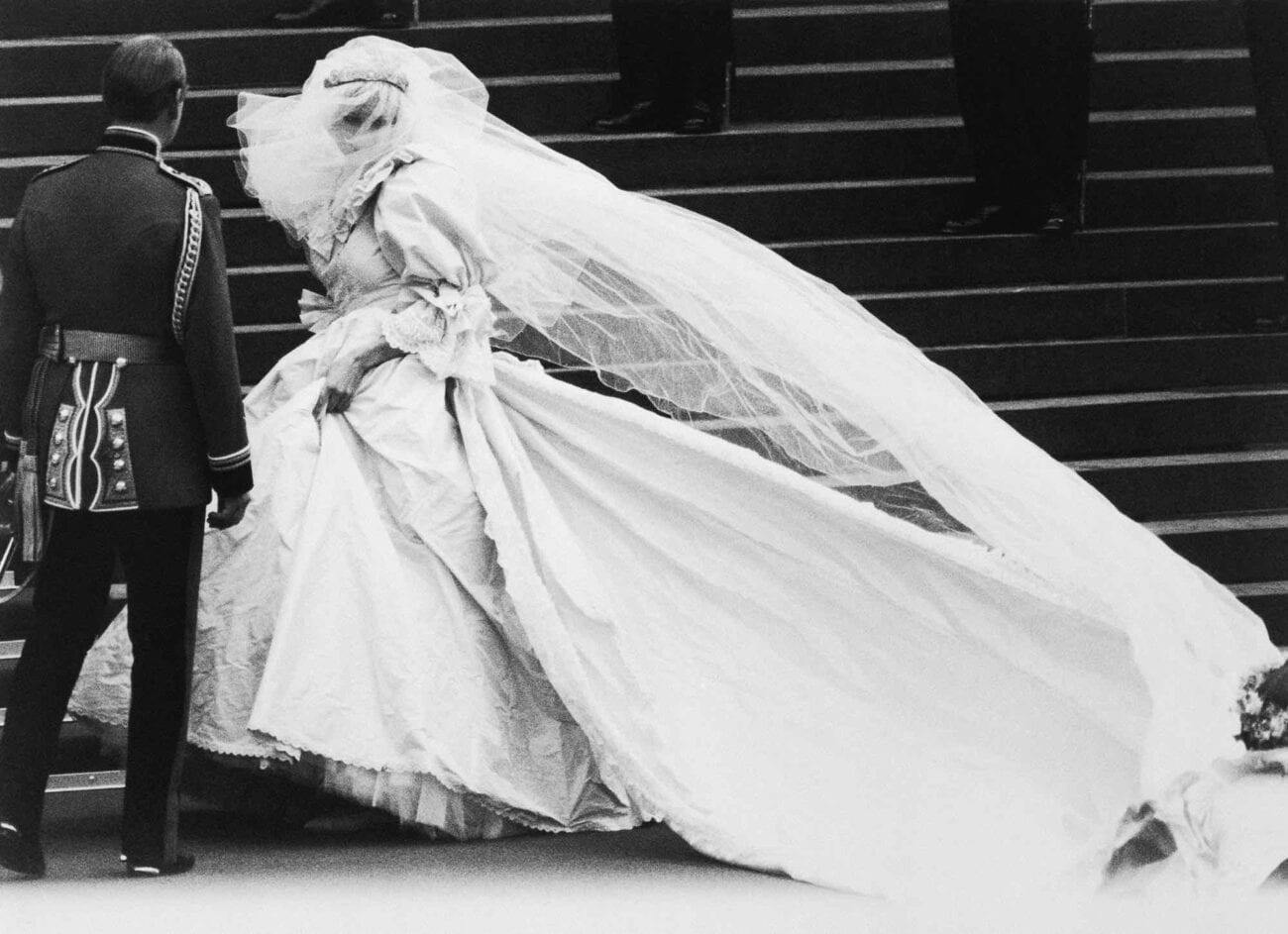 Did ‘The Crown’ ruin Princess Diana’s wedding dress? Zip into the details

After a long wait, we’re finally getting a chance to see Lady Diana Spencer on the acclaimed Netflix series The Crown. Despite the pandemic, filming ended just before shut-downs began, so fans have something to look forward to on November 15. In the meantime, Netflix has released some excited images from the fourth season, including a peek at the world-famous dress from the wedding of Prince Charles & Lady Diana.

The Crown has consistently been praised for its immaculate costuming & production design, and fans seem just as happy with the replicated dress. Here’s everything you need to know about the exciting appearance of Lady Diana & the upcoming season of The Crown. 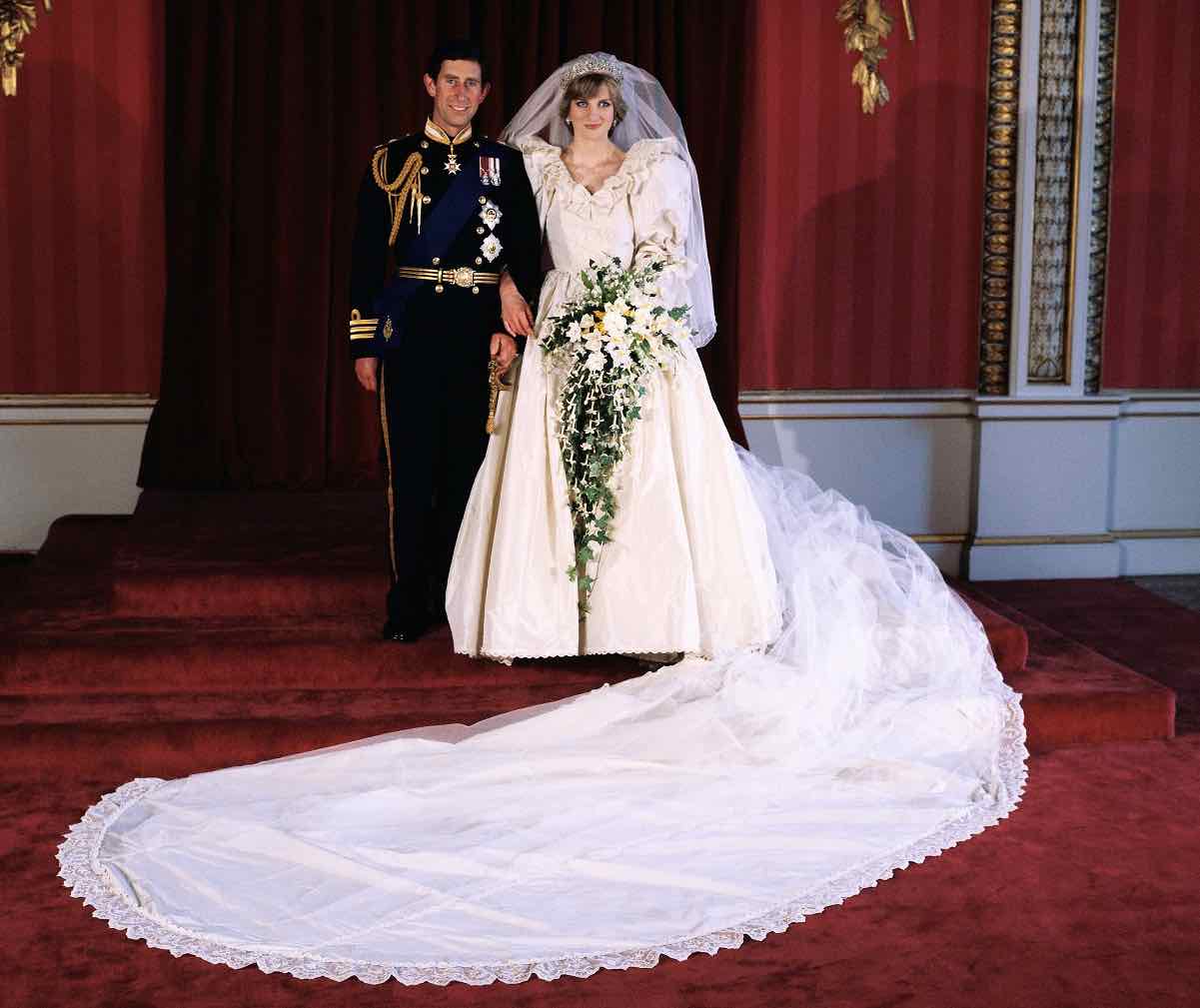 It was a dress that set trends and stunned the world. Former husband & wife fashion designers David & Elizabeth Emanuel designed the famous dress in 1981 for the wedding of Prince Charles & Lady Diana Spencer. Diana personally chose the Emanuels for the job because she liked a blouse they had previously made for her.

Made up of sequins, hand embroidery, 10,000 pearls, and hand-made Carrickmacross lace belonging to Queen Mary, the voluminous dress made an impact when Lady Diana first faced the public. A 1981 article of Orange Coast suggested more brides had requested large sleeves & full skirts after Diana walked down the aisle.

Because of its immense popularity, the dress has gone on tour around the world. Diana’s original dress is now located at the Althorp House, the estate where Diana grew up. Her son Prince Harry owns the dress, as she requested her sons receive her belongings when they turn thirty. Prince William, meanwhile, received Diana’s engagement ring and gave it to Kate Middleton when he proposed to her. 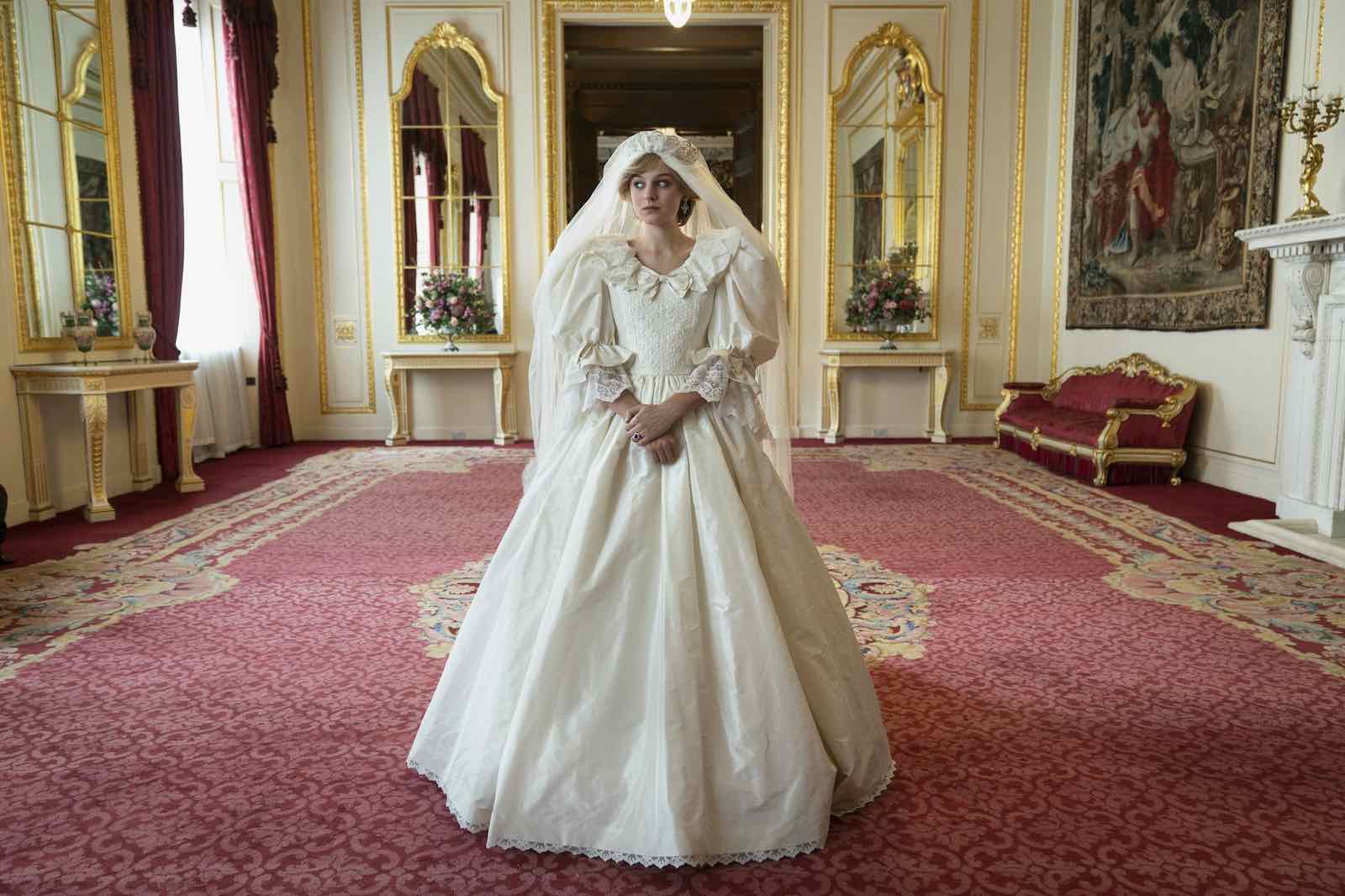 The replicated dress was designed by Amy Roberts, who recently won the Primetime Emmy for Outstanding Period Costumes for the episode “Cri de Coeur”. Roberts has been the lead costume designer for The Crown since season three, where Roberts has showcased her skills on the retro attire of the 60s & 70s.

While not an exact replica, the dress is extremely similar to the naked eye. It took multiple fittings & four months to create, so Roberts took immense care in creating the world-famous dress. Even more impressively, Roberts didn’t have access to the original patterns, so she collaborated with David Emanuel himself. In sum, the dress took three people a collective 600 hours to make, according to Netflix. 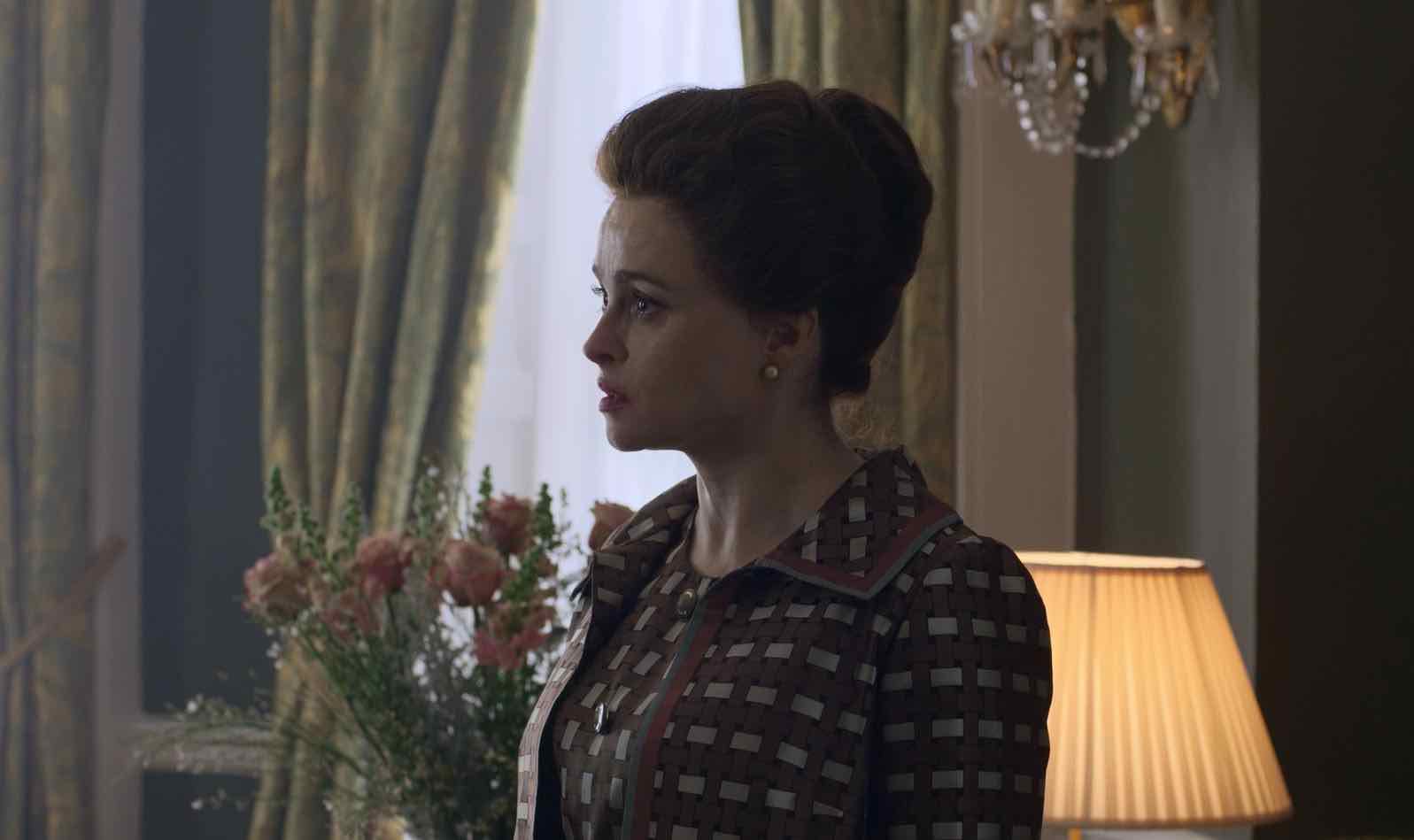 The Crown has an elite costuming department, and is three for three, winning the Primetime Emmy award for Outstanding Period Costumes for each of its three seasons. With its luxurious gowns & perfectly tailored suits, The Crown’s costume designers have a lot of pressure on them when it comes to replicating the royal family’s famous outfits.

The Crown’s costume designers have said in the past their intention isn’t to exactly replicate famous royal outfits, though they do always seem to nail the royals’ attire. Roberts had the same desire with Corrin’s dress, as the costumer hoped to “capture the same spirit and style” as the Emanuels, but still wanted to make a new dress. 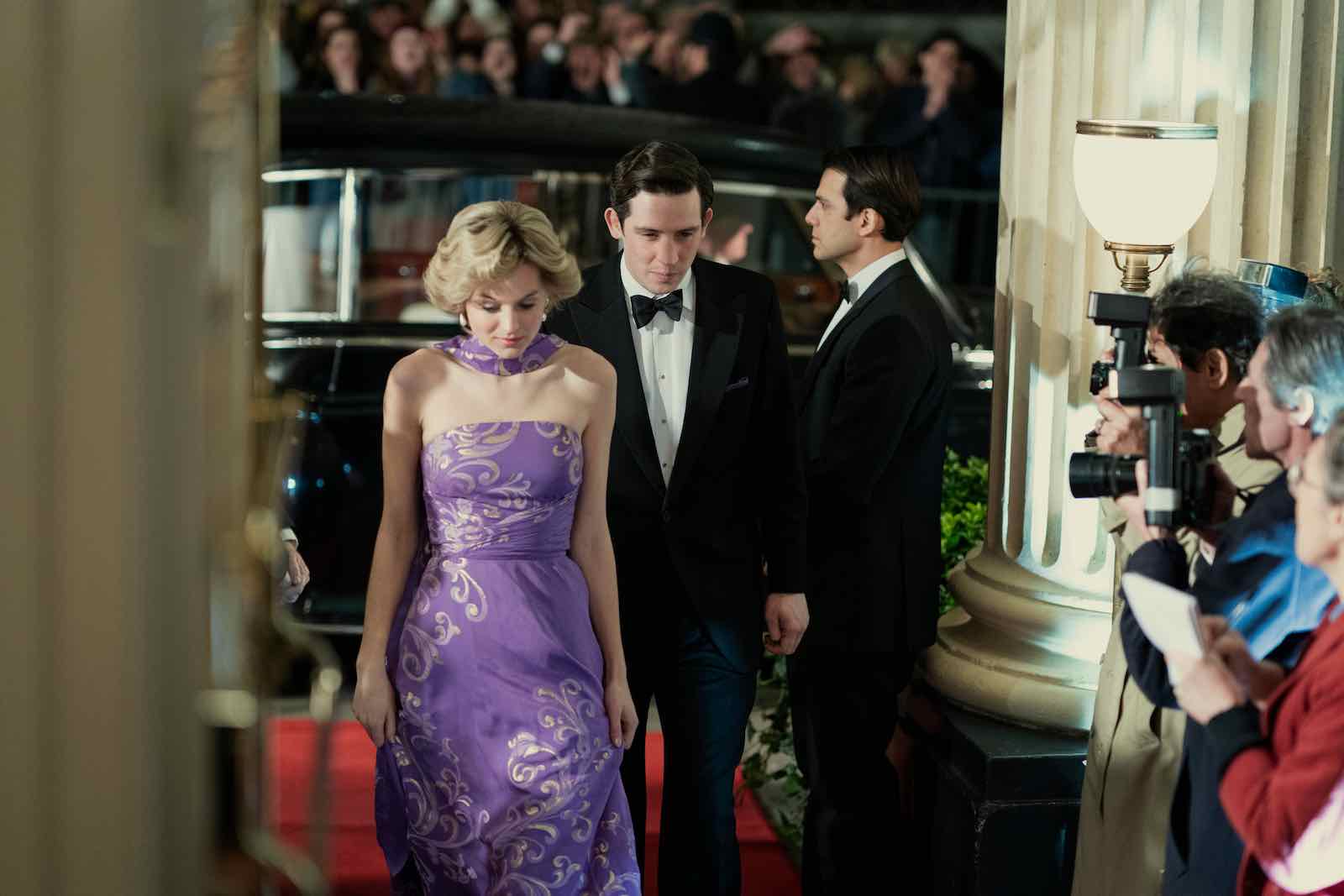 What’s next for The Crown?

The Crown’s fourth season will mark the second appearance of Olivia Colman as Queen Elizabeth with Tobias Menzies as Prince Philip & Helena Bonham Carter as Princess Margaret. Prince Charles will be played by Josh O’Connor, who’s also reprising his role from the third season, though this will mark Emma Corrin’s first appearance as Lady Diana.

The Crown’s next season isn’t set to be released until November 15, but we do have some details about the upcoming ten-episode season. Other than the famous wedding of Prince Charles & Lady Diana, the season will explore Margaret Thatcher’s time as prime minister, with Gillian Anderson playing the controversial leader.

The fifth & sixth season will feature a new cast, as the series enters its final phase and catches up to the 21st century. Elizabeth Debicki will take over as Diana after Corrin’s departure.