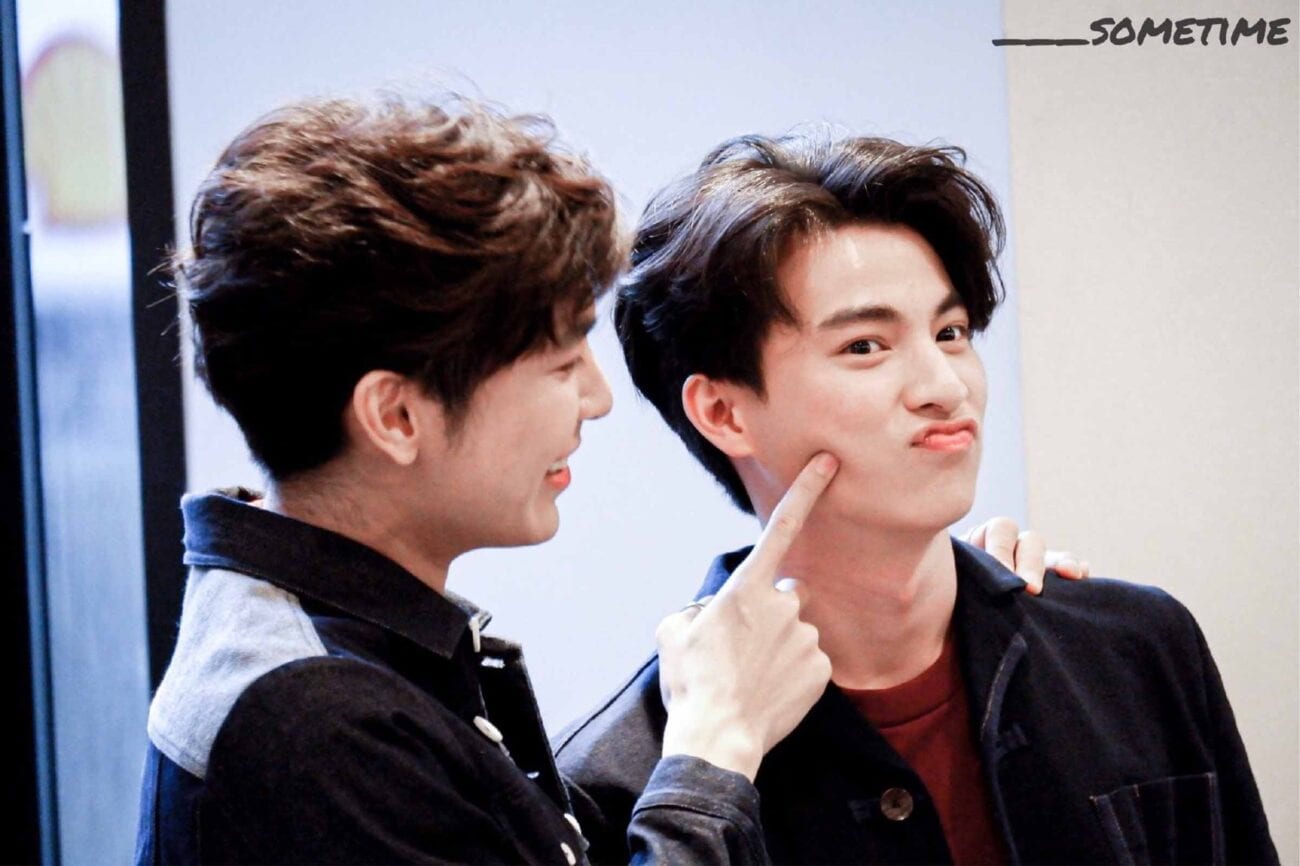 Although somewhat problematic in the beginning, TharnType: The Series has gained quite a devoted & frenzied following. The relationship that plays out on screen between Tharn & Type is full of angst & drama, but it’s also exceptionally steamy & full of love.

Off-screen, Gulf Kanawut & Mew Suppasit seem to have developed quite a beautiful relationship. While the exact nature of their relationship has not been disclosed officially, the pair say that their relationship is one of ‘brother’s who love each other very much’. Very much indeed. 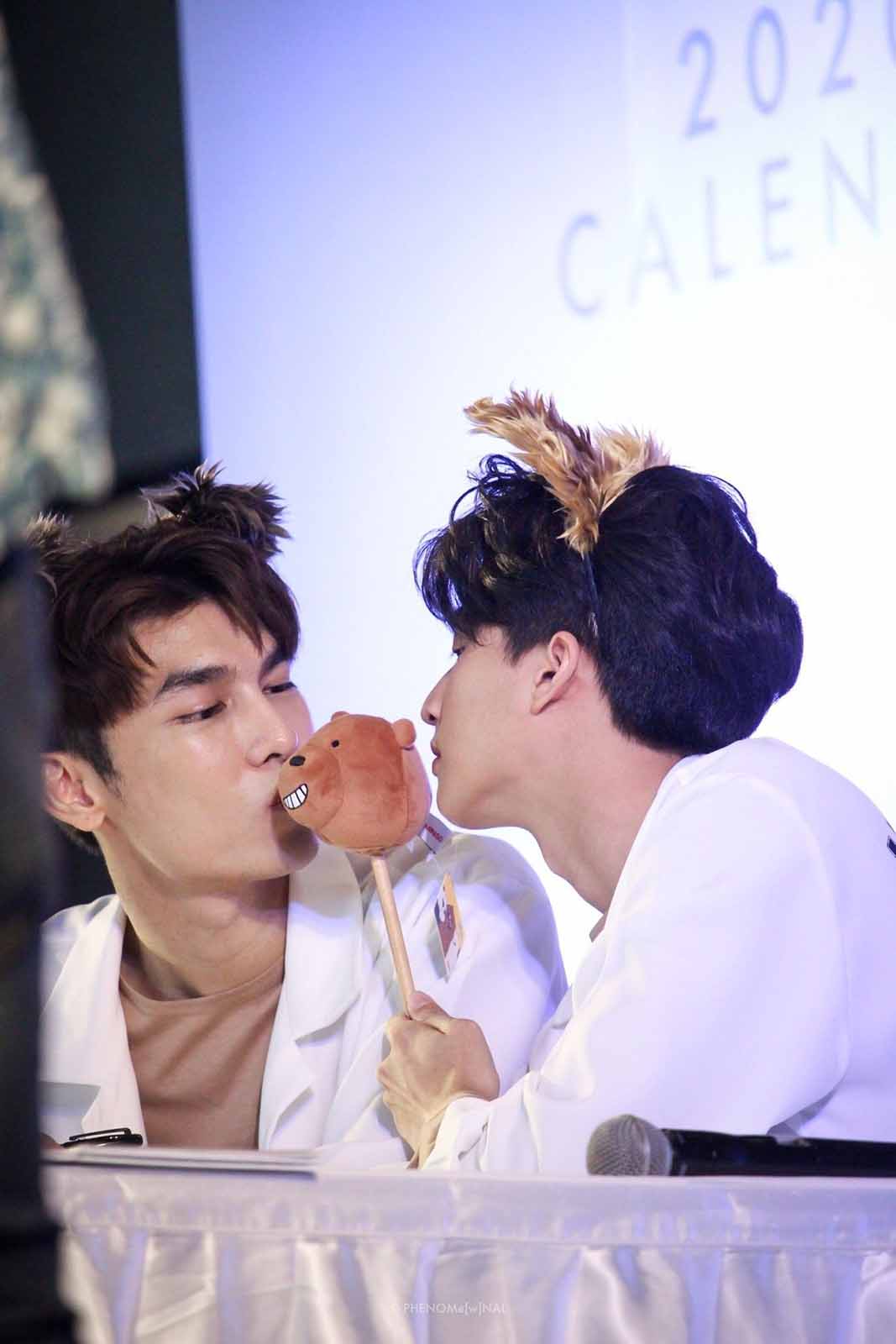 The two are often seen together holding hands, hugging & engaging in all kinds of affectionate behavior. As TharnType: The Series wrapped up in early January, the boys were thrust into all kinds of promotional events. They were found spreading their ‘brotherly love’ all over Thailand and social media until COVID-19 quarantines were imposed.

Quarantine in Thailand seems a little freer than most places & the boys can often be found on Instagram doing Lives together, sponsored & just for the fun of it. Their ‘brotherly’ affection has not diminished at all. They have a die-hard fan base that follows their every move. So what is it about these two that makes people follow them so closely? Come with us as we unpack our favorite MewGulf moments so far. 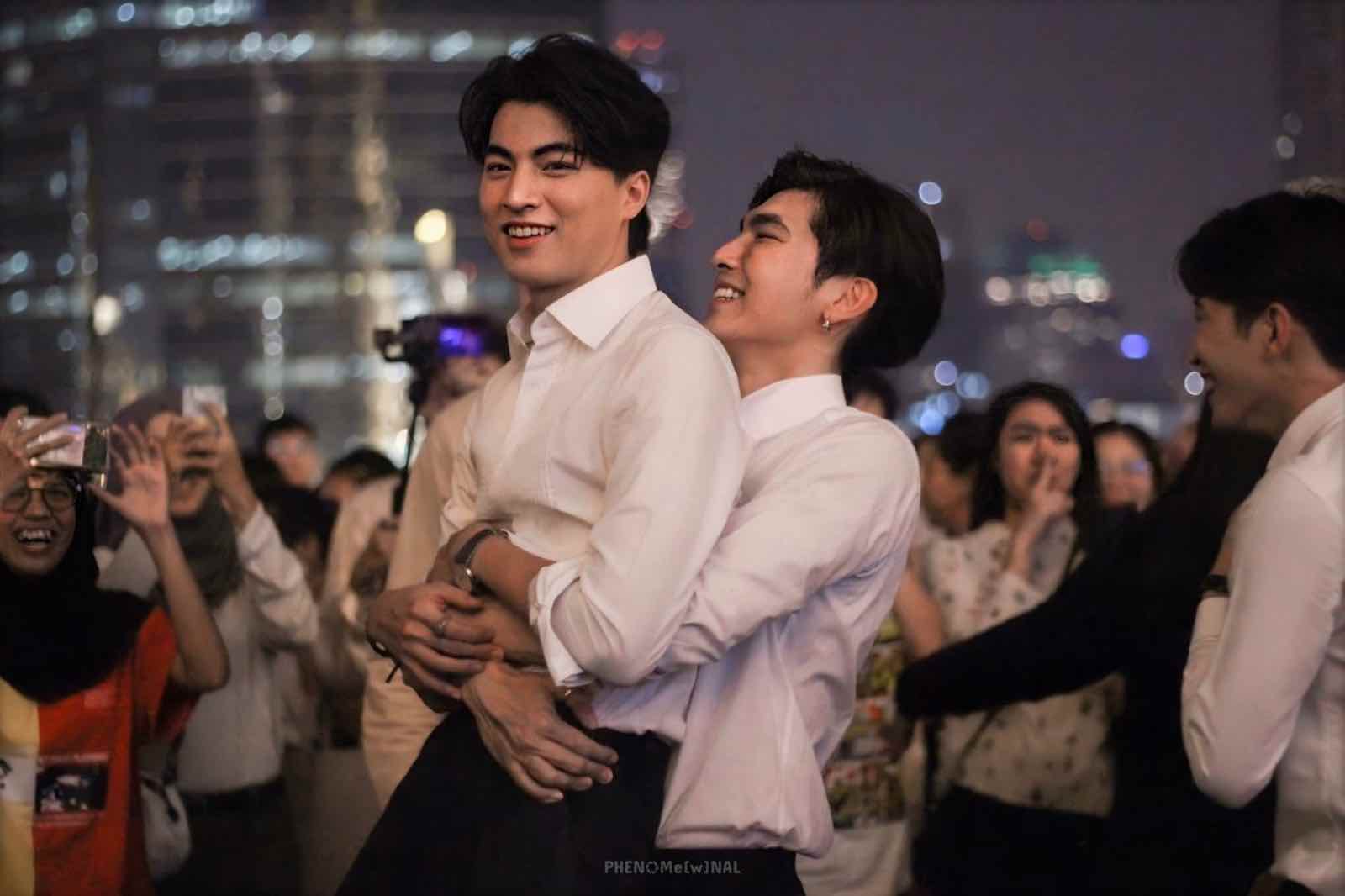 At Gulf Kanawut’s birthday fan meet in December of 2019, Mew Suppasit had prior engagements and was unable to make the event to support Kanawut & celebrate his birthday with his ‘brother’. Suppasit recorded a birthday message that was played on stage for Kanawut, as Kanawut watched on smiling.

At the completion of the recorded message, Kanawut faced the audience & began talking about how much he appreciates Suppasit, and just how blessed they both feel to have each other in their lives. They sing each other’s praises a lot though, and can often be found talking about how lucky they feel to have found each other. Totally ‘bro’ behavior right? Right. However, this isn’t what had folks screaming at that moment. 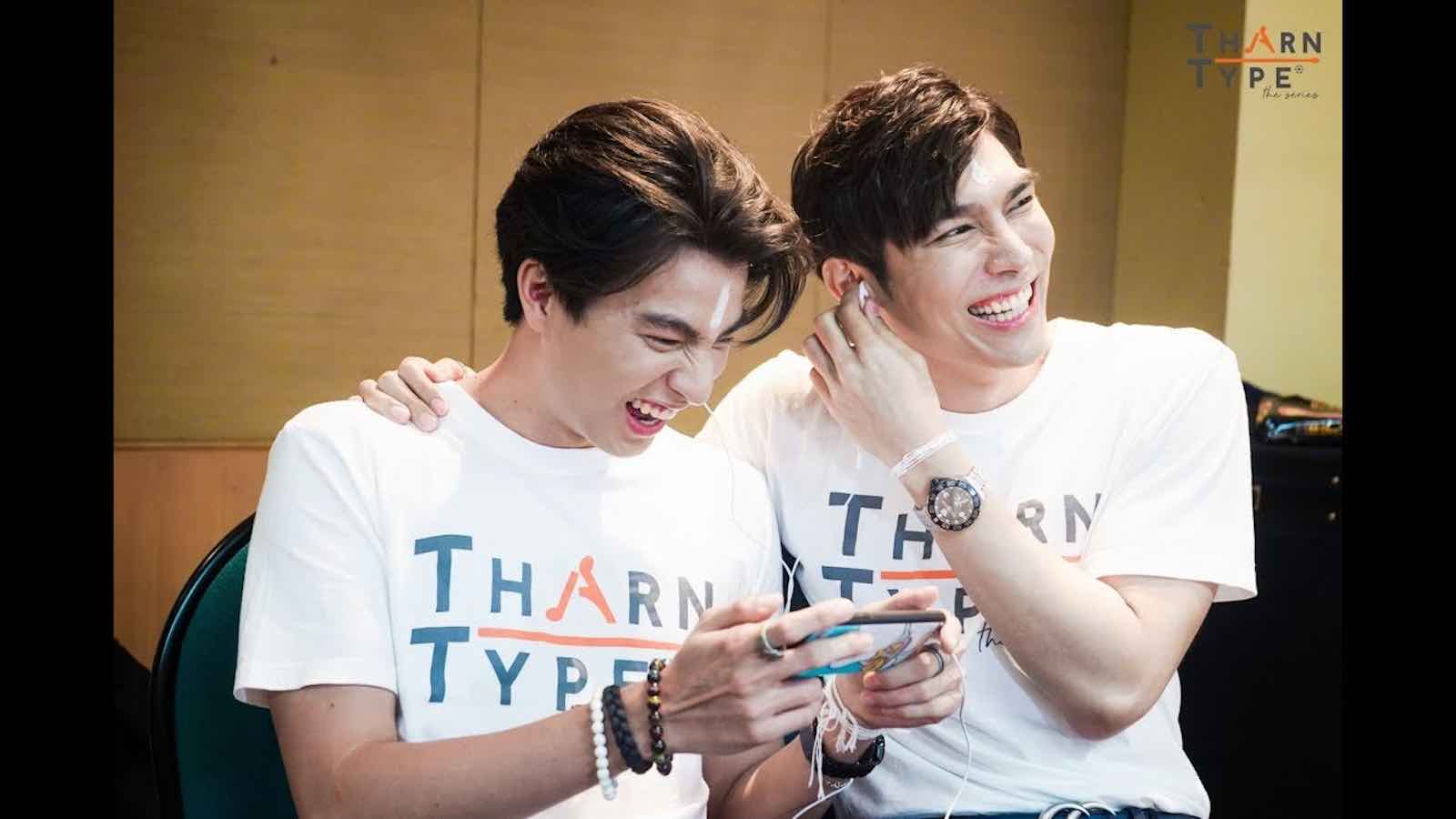 As Kanawut stood on stage babbling on & on about Suppasit, Mew Suppasit’s voice filled the auditorium. Initially, fans & Kanawut alike were both very confused. Kanawut scrunched up his face, looking around for an explanation. At first, we thought it was a recording, clearly, Kanawut did too, but then Suppasit himself appeared at the back entrance of the auditorium, and fans exploded. Suppasit orchestrated the whole thing as a surprise for Kanawut’s birthday.

As Suppasit made his way to the stage to greet Kanawut, the crowd around them exploded. Kanawut stood on stage awkwardly, clearly having trouble holding his emotions in. By the time Suppasit arrived on the stage to greet his co-star, Kanawut was clearly shedding a few tears.

The whole moment is nothing short of adorable, and we have to say, we may have become a little emotional ourselves watching it. Check out the video below to see what we’re talking about.

In Thailand on New Year’s Eve, it’s tradition to go to temple with loved ones to bring in the new year, meditate, make merit & receive blessings. For the 2020 NYE celebration, Mew Suppasit, Gulf Kanawut & their families went to temple together.

The significance of this surprised a lot of people around the world. From this moment forward, although no one really seemed to know what the exact nature of their relationship was, one thing everyone everywhere seemed to agree on is that these two men were no longer just co-stars that got along really well.

Their families and management teams all got together to eat a feast, like one big happy family. They all attended temple together & then Suppasit & Kanawut counted in the new year together on an IG live. Of course, they did. Fortunately for Waanjai (this is the name the pair gave to their fandom) everywhere, they recorded a lot of their night together and threw it on IG. Check it out the two videos below:

Between New Year’s Eve 2020 and February, Mew Suppasit & Gulf Kanawut had paraded their affectionate brotherly love all over Thailand and social media so much that fans began calling them out online. At the same time, interviewers began constantly grilling them about the true nature of their relationship. Their response remained unwavering though: they are brothers who care about each other a lot.

However, then they did something that had the fandom falling all over themselves, collectively screaming all around the world: they went on a Valentine’s Day date together (because you know, that’s what brothers do).

On Valentine’s Day of 2020, they had a fan meet together in the morning with their TharnType: The Series castmates. At the completion of the fan meet, Suppasit had to quickly leave, as he had classes for the remainder of the day, well into the evening, for his Ph.D. program. 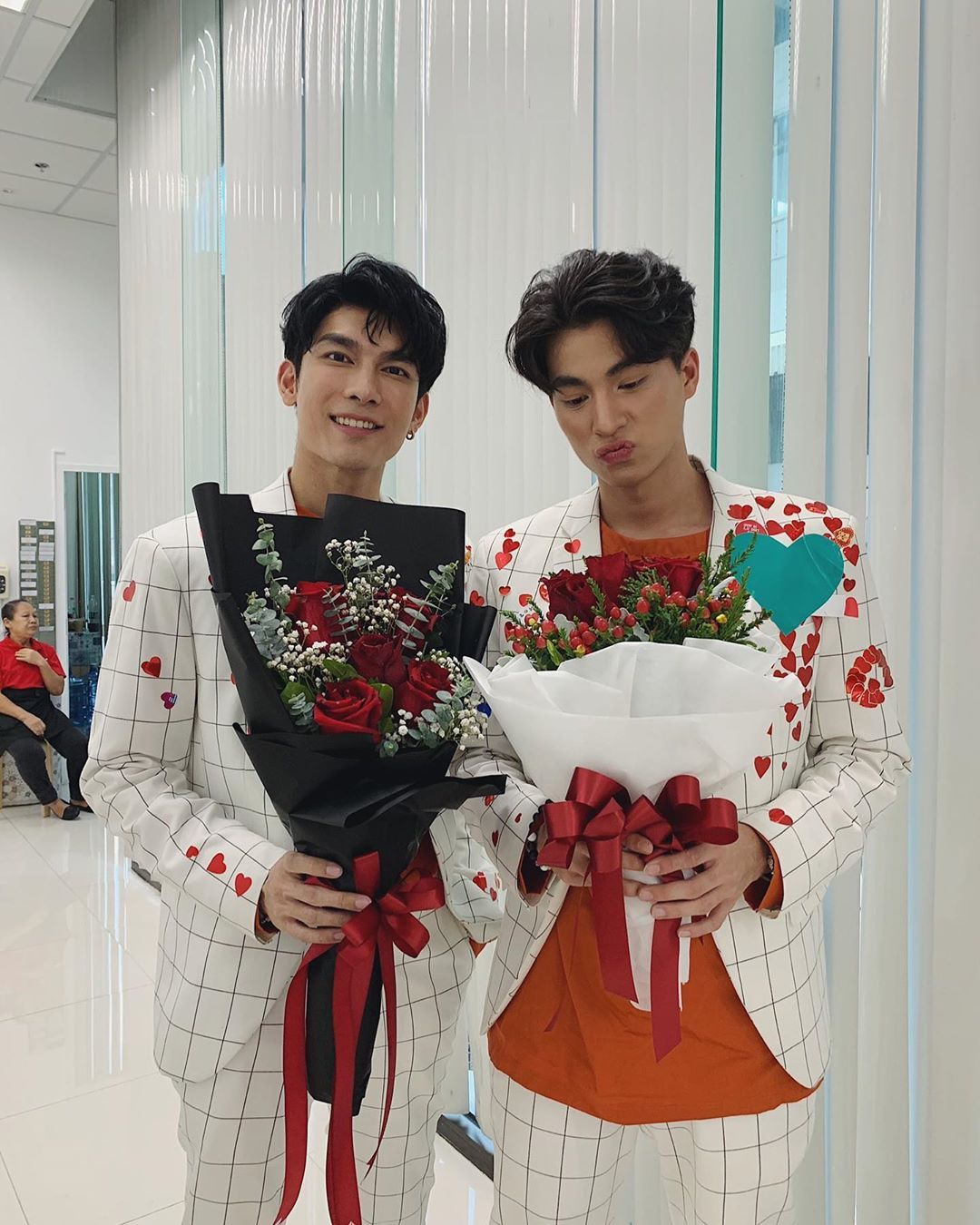 When his classes finished at 10pm later that night, Suppasit then went and collected Kanawut, who just happened to be in the area having dinner with his parents, and the pair went and had the remainder of their Valentine’s Day together – even though Suppasit had to fly out of the country first thing the next morning.

There were no managers, no staff, no other castmates present this time (which is normally the case for them). It was just the two of them, alone. Fans all around the world screamed when Suppasit dropped photos of the two of them celebrating together on his IG story. These ‘brothers’ sure do love each other a whole lot! 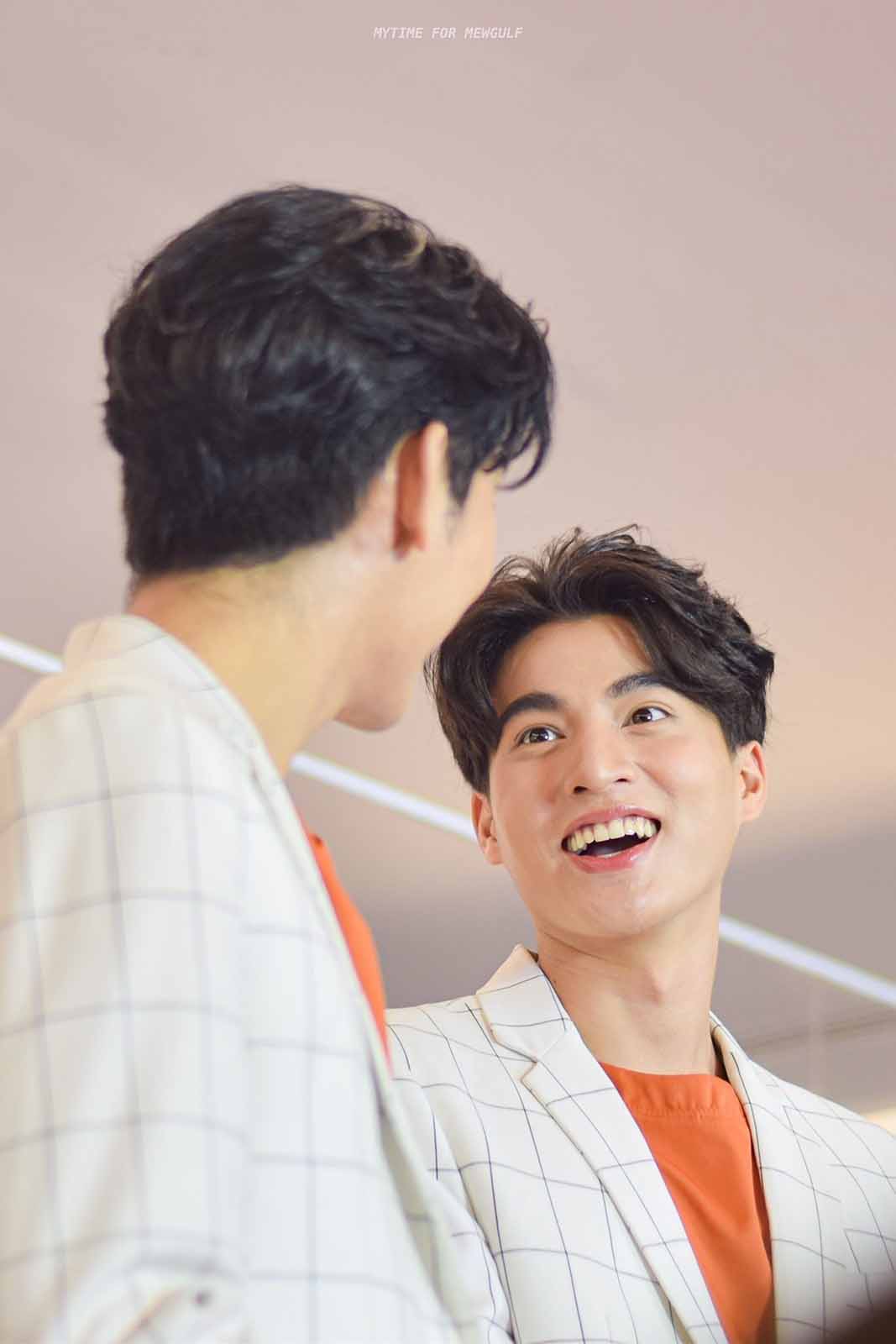 MewGulf answering questions in an interview about their date:

Not too long ago, the pair showed up for a television appearance together. They did a whole lot of stuff that day, but there was a defining moment that sent fans berserk. In one of the segments on the show, both Suppasit & Kanawut were presented with an array of different items & they had to guess which one in front of them belonged to the other. 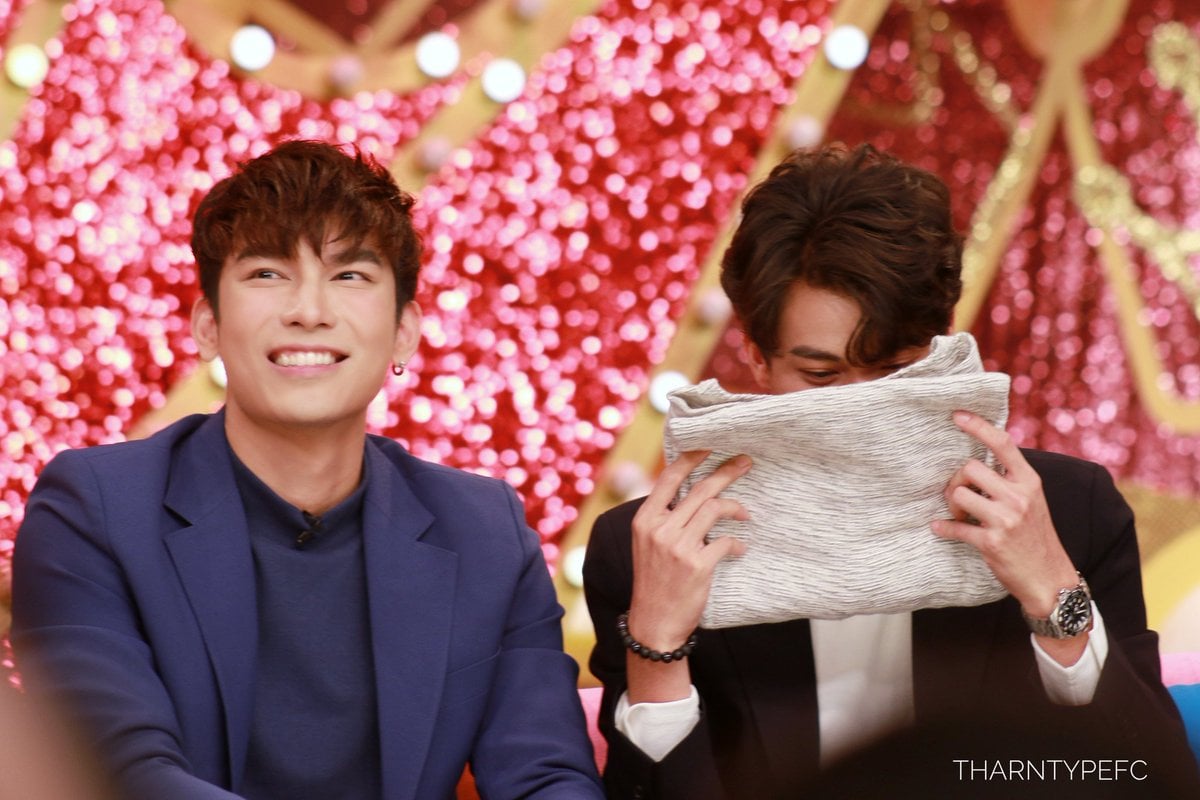 When the hosts asked him how Kanawut knew that shirt belonged to Suppasit, he said that it had Mew’s smell all over it. Suppasit confirms that the shirt Kanawut is holding is in fact his, while a look of utter pride washed over Kanawut’s face.

This made our list for two reasons: firstly, we are really impressed by just how next level their bromance is. For Kanawut to be able to identify Suppasit’s personal smell on a freshly laundered shirt means they must spend a lot of time together. Secondly, Kanawut’s sheer delight when he identifies the shirt correctly is nothing short of adorable. He is just way too happy with himself.

To watch a clip of the video, click here. Unfortunately, it’s not subbed! 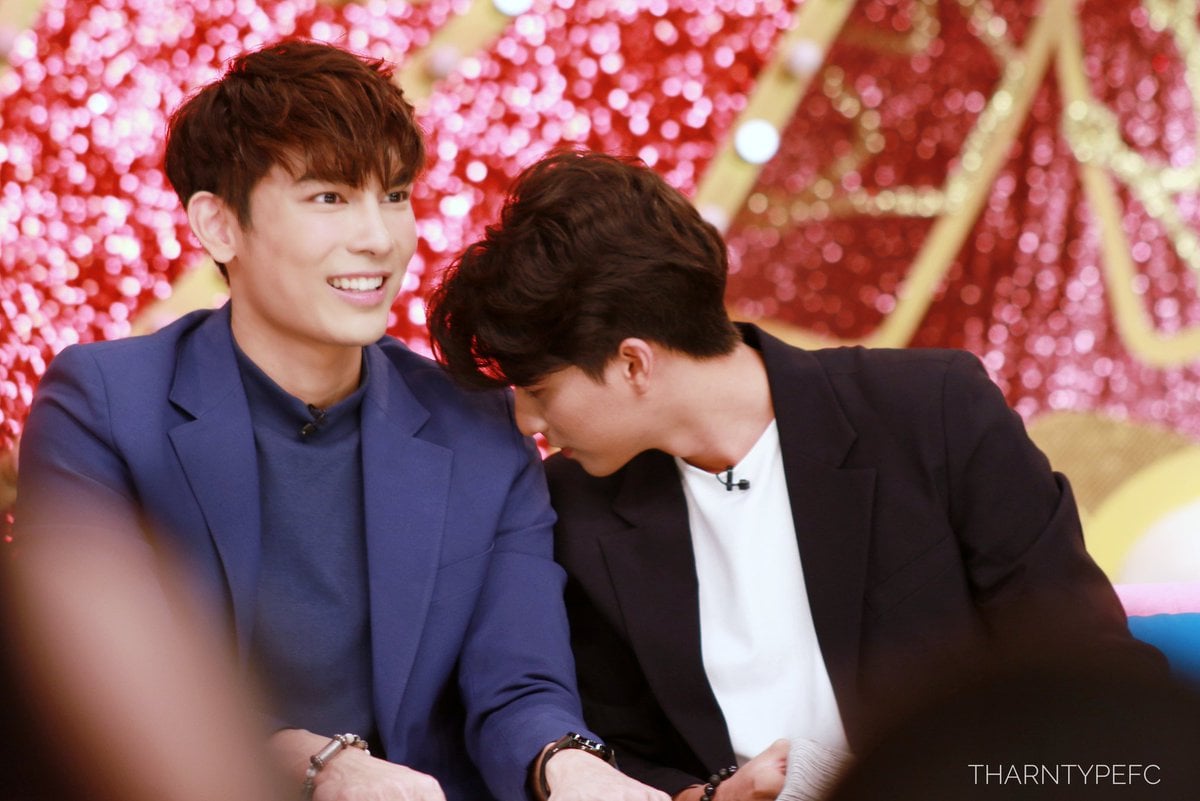 In late February, it was Suppasit’s turn to have a birthday. Unfortunately, Kanawut had his own fan meeting booked that day 2 hours away from Bangkok where both the young men live. This meant that they really couldn’t be together for Suppasit’s birthday, unlike when Suppasit tricked Kanawut into thinking he couldn’t attend his. Or did it?

Kanawut did have his own fan meeting that day. It was a long event & it really was 2 hours away from Bangkok. However, determined to show his ‘brother’ just how important he was, Kanawut arranged for his manager to drive him straight from the event to Suppasit’s house so he could surprise him. Kanawut arrived, unannounced, right before midnight – just in time!

Everyone seemed to be in on the surprise (except Suppasit) and as Kanawut showed up on Suppasit’s doorstep, still wearing the same clothes from the event he had just come from, cameras caught Suppasit’s reaction. Suppasit was clearly shocked, clearly touched by the young man standing on his doorstep holding a salmon cake (apparently Suppasit prefers salmon over sweet cake). 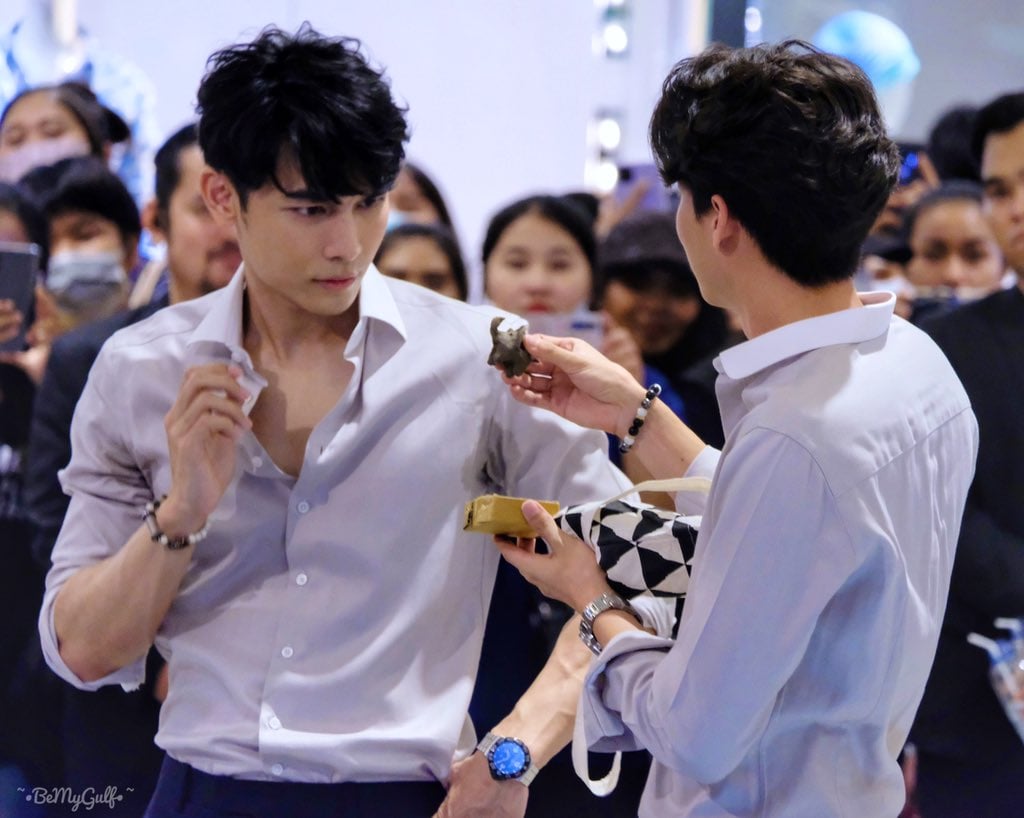 There are a lot of videos and photos floating around on the internet of the pair spending time together that night in Suppasit’s home, including videos of Kanawut allegedly being introduced to Suppasit’s dog for the first time.

Then, the next day, they did something else that sent the fandom absolutely spinning: they attended Suppasit’s birthday merit together with their mother’s in tow. A birthday merit is supposed to revolve around the birthday person in question, unless married, then blessings are bestowed upon the couple together. 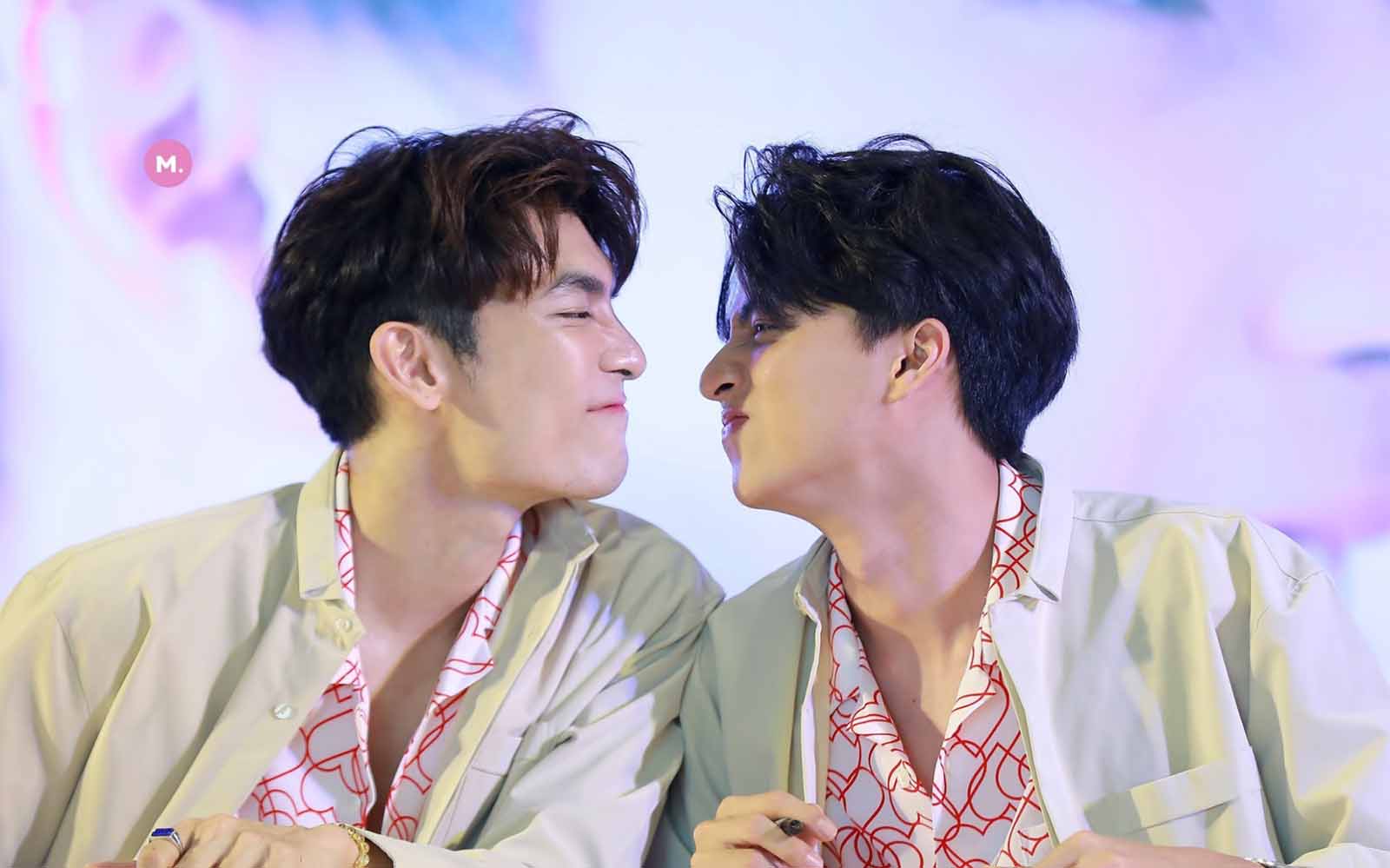 When Kanawut knelt down on the altar next to Suppasit to receive blessings with him, the fandom just about lost their minds. Suppasit’s birthday merit hashtag trended worldwide on Twitter as speculation about their brotherly love exploded yet again.

During the birthday merit, Kanawut surprised Suppasit yet again. At one point during the ceremony, he told Suppasit that he had to go. The pair said their goodbyes, but Kanawut didn’t leave. He ran off somewhere out of sight & came sauntering back in with yet another cake singing happy birthday to Suppasit in front of everyone. A very flushed Suppasit looked on at his ‘brother’ with complete fondness.

MewGulf being interviewed at the merit ceremony:

Gulf Kanawut presenting Mew Suppasit with a cake, as well as monks blessing them together:

So is it bromance, showmance, or romance? At this point, we don’t really care. We’re just happy to have them on our screens spreading love & positivity. If the evidence we’ve presented to you today isn’t enough to convince you that you should be following these adorable dudes, then get on youtube and search for some of their recorded IG lives together. We guarantee you won’t regret it.

The onset of filming for TharnType: The Series Season 2 was delayed due to COVID-19. However, a recent update on the show’s official twitter page stated that workshops & filming would begin soon.