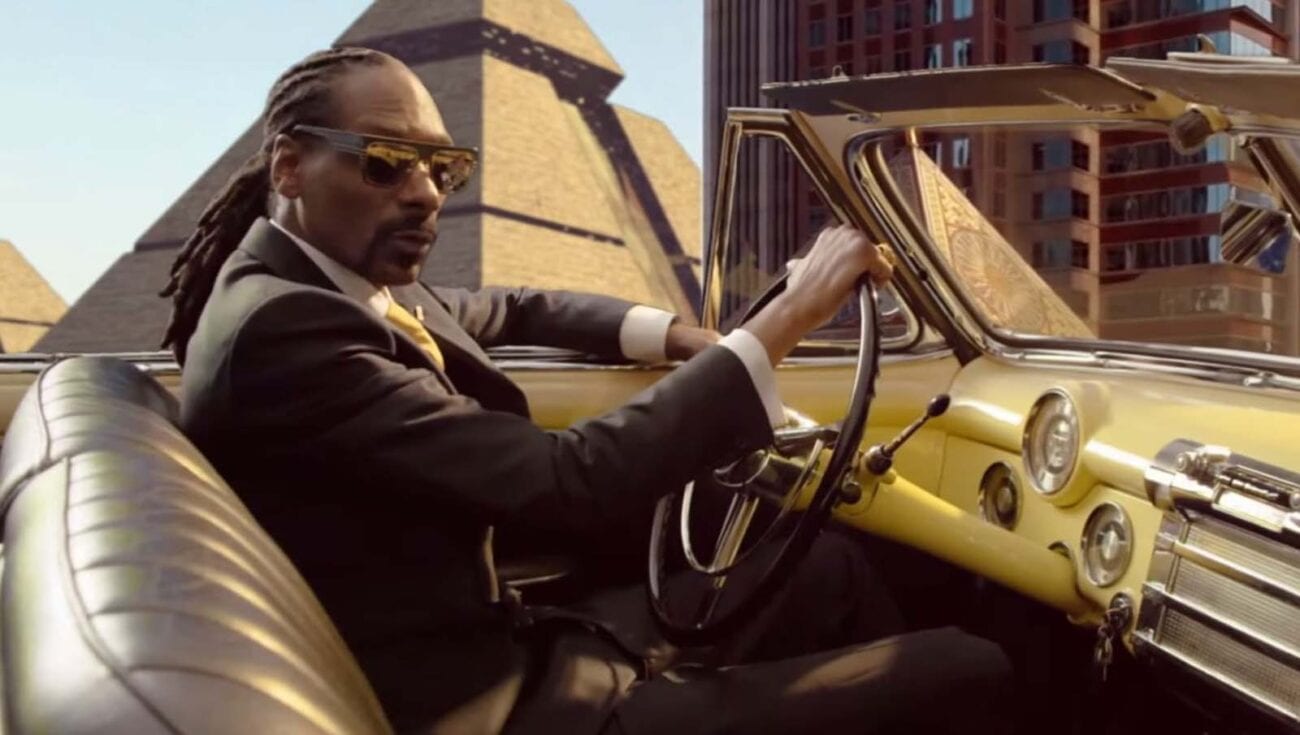 Snoop Dogg flaunts his net worth with a car collection: See it here

Snoop Dogg is most famous for rapping and being a proponent for the use of recreational weed. However, he’s most certainly many other things. Snoop Dogg has recently been looking into revitalizing Atlantic City, for one thing.

He’s also been credited with titles such as actor, producer, Martha Stewart’s best friend, and even winemaker, among others. Despite his laid back & easy going attitude the rapper seems to constantly be looking for the next thing to work on. So, it isn’t all that surprising to learn his net worth can easily be described as high (not a pun, we swear). Snoop Dogg’s net worth is estimated to be approximately 150 million dollars.

Even a hard worker like Snoop Dogg needs a hobby for his freetime, though and Mr. Dogg’s is collecting flashy cars – most of which are customized in some way or another. Let’s take a look at how the rapper puts his net worth to use on his car collection by looking at some of his most interesting purchases. 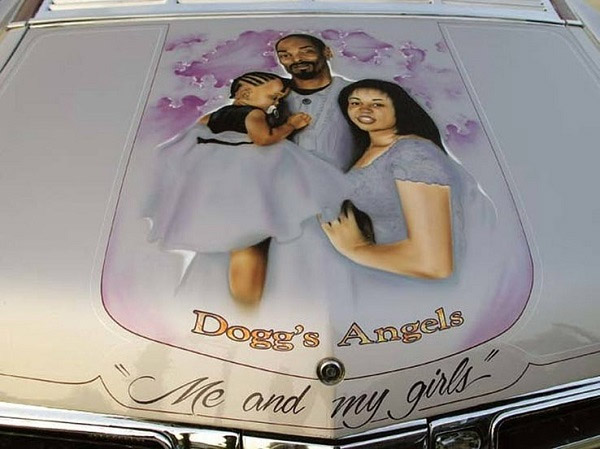 Most of Snoop’s cars are classics. Snoop has two classic Buick’s but this 1968 one is certainly something special. It has a white paint job and pink wheels, but the most notable customization can be found on the hood. There, you’ll find a portrait of Snoop, his wife, and his daughter.

The portrait is titled “Dogg’s Angels” and also has the caption “Me and my girls”. This vehicle no doubt has a soft spot in Snoop’s heart and was featured in his 2006 music video for the song “Vato”.

This specific version of the Buick Riviera is bigger than its predecessor (there are two versions of this car) weighing 200 pounds more, and also sports a width & length that are bigger than the original vehicle. 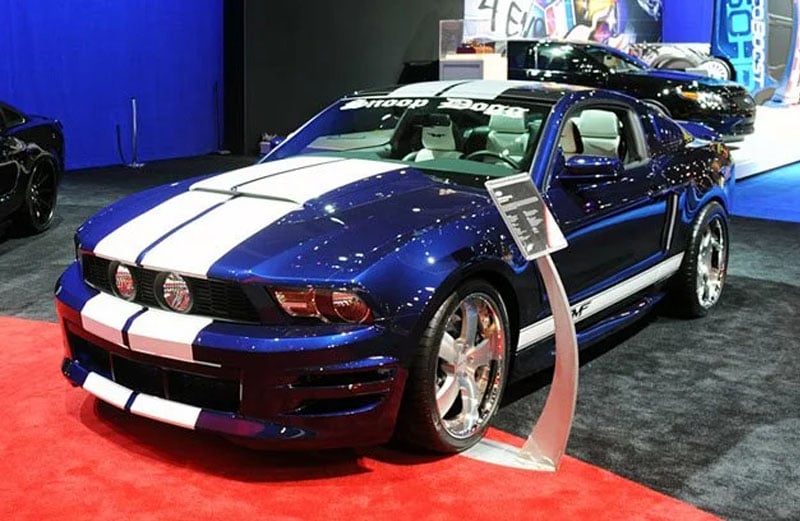 One of the few cars that isn’t a classic, this beefy Mustang is a notable member of Snoop Dogg’s collection. This vehicle was customized by Funkmaster Flex for Snoop in collaboration with Ford, who invited Flex to create the car in 2011.

Of course, since the car was made specifically for Snoop Dogg the windshield also features a white decal with his name on it. (If Snoop ever decides he doesn’t want this car anymore, we’d happily take it off his hands.) 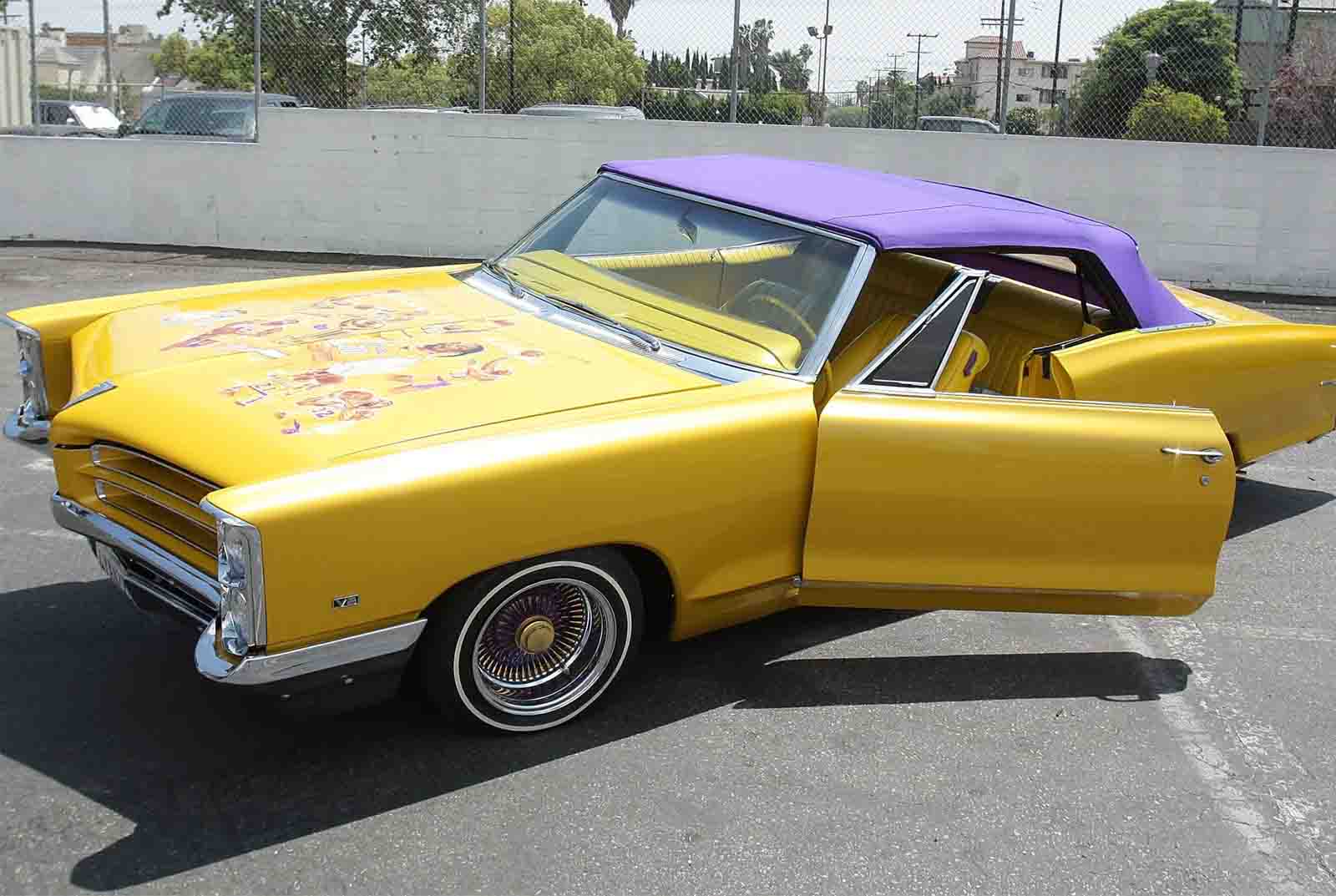 Snoop Dogg’s 1966 Pontiac Parisienne is no longer in Snoop’s collection, but it’s worth talking about anyway. The soft top convertible is painted yellow and features a purple top & a decal on the hood featuring some of the basketball team’s most famous players such as Shaquille O’Neal, Abdul-Jabbar, Magic Johnson, and Kobe Bryant. (Not to mention a large likeness of Snoop, himself, in a Lakers jersey.)

This car was also modified to be a lowrider, meaning the vehicle’s chassis could be lowered to the point it nearly touched the ground – or could be used to bounce the vehicle, as well.

In 2016 Snoop gifted this Lakers themed car to Kobe Bryant as a retirement present. 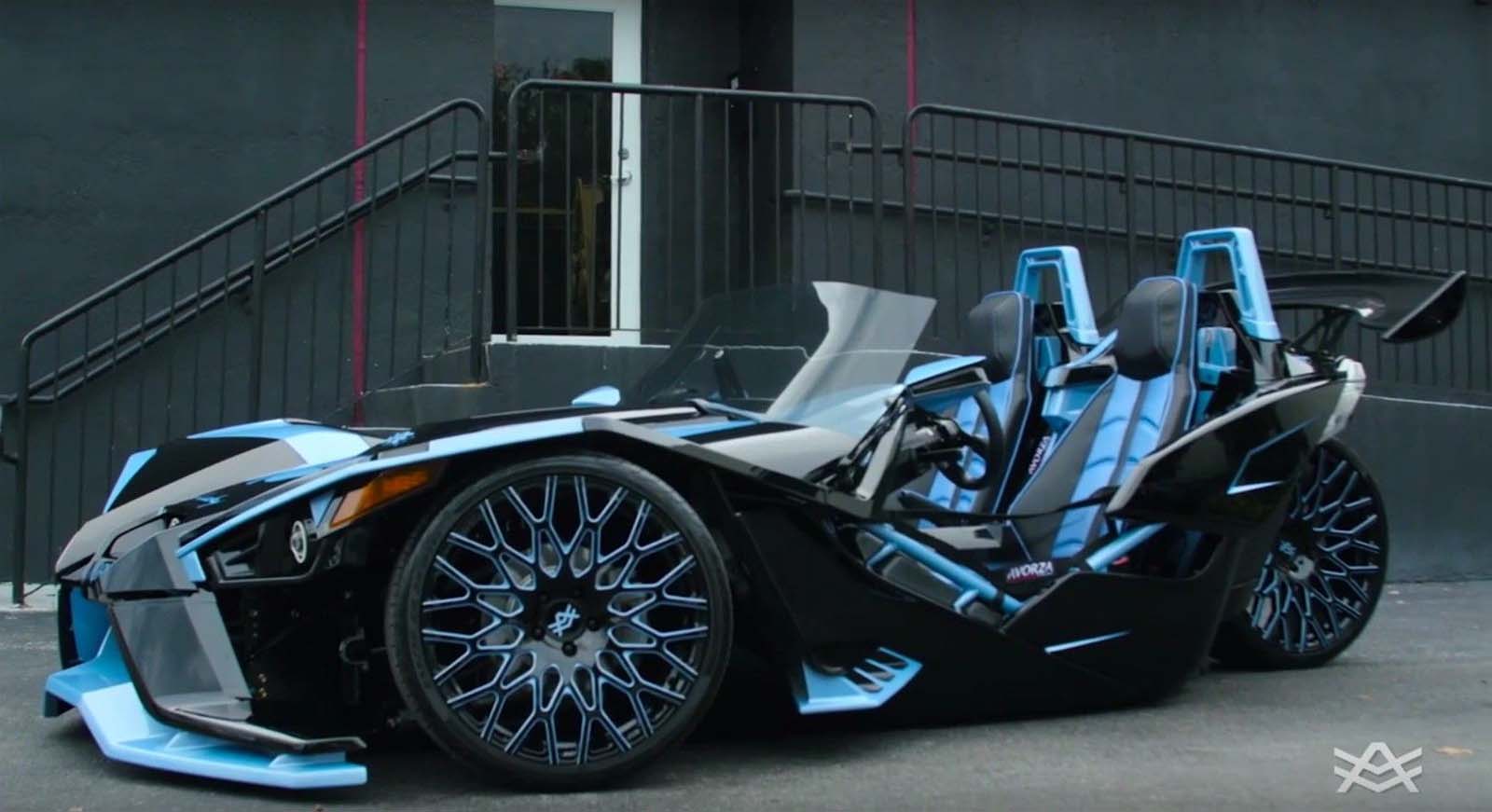 This fun little 2015 vehicle has only three wheels – two in the front & one in the back. It’s also a fair guess that this may be the cheapest ride in Snoop Dogg’s garage coming in at around $26,000.

The car is extremely light, weighing about 1,743 pounds (the average car is about 4,000 pounds) and boasts an EcoTec engine and up to 173 horses. Despite what you may have assumed this little two-seater is completely street legal.

Snoop’s vehicle is, of course, customized with sexy blue accents on the black car and a dashboard that lights up in purple and blue. Unsurprisingly, the rapper has nicknamed this ride The Batmobile. 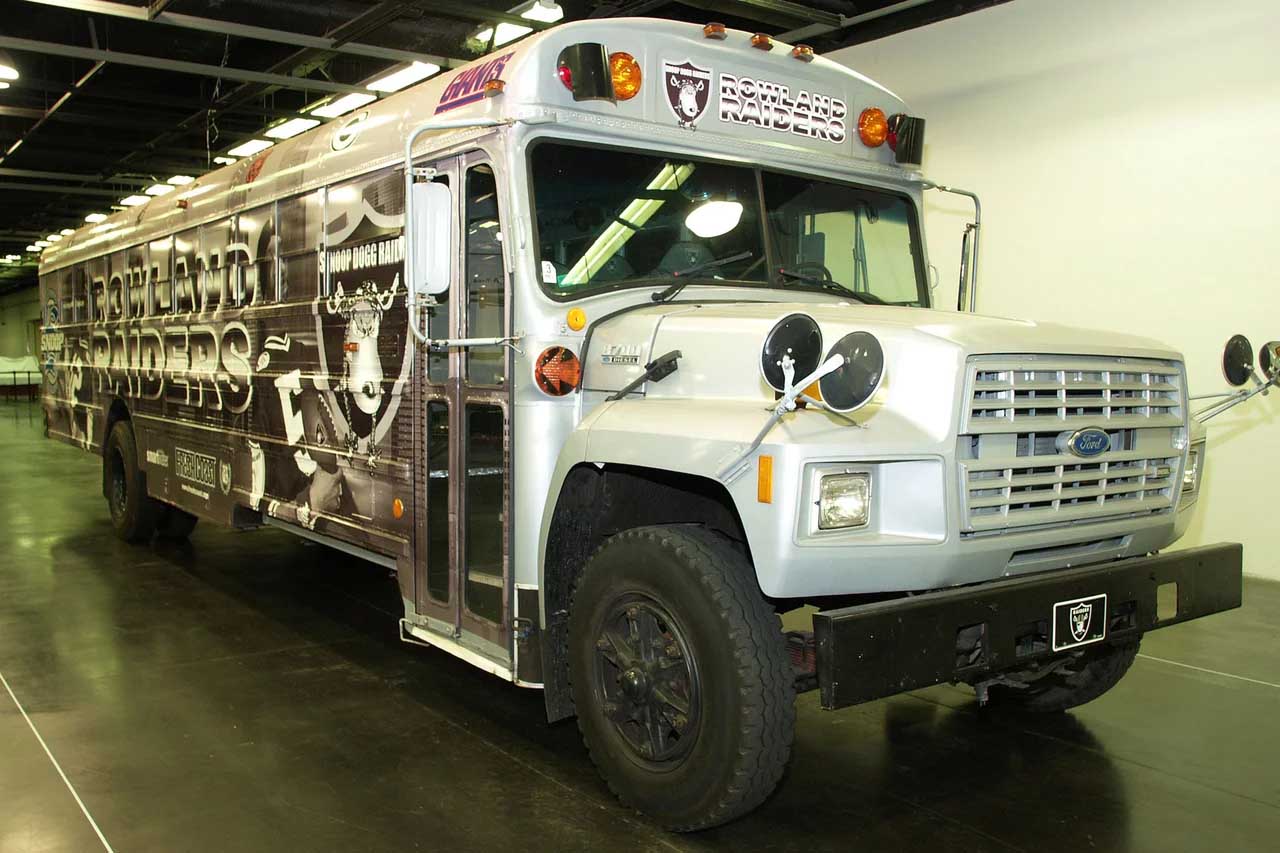 One of the most unexpected rides in Snoop Dogg’s car collection is an actual Ford school bus, but it’s clearly of sentimental value. In 2004 Snoop coached the Rowland Heights Raiders football team. So he had Big Slice (who has customized a number of Snoop’s cars over the years) buy an old school bus and create something special.

The outside of the bus is now a shiny silver and features all kinds of Rowland Raiders imagery and a picture of Snoop Dogg throwing a football. The team got to ride in the bus to and from games.

The interior is kitted out with twenty-seven different screens, seventy speakers, two separate DVD players, and even a VHS player. (Remember, this was 2004.) Even more fun, whoever was deemed the MVP of the game was able to play on the bus’s Xbox on the ride home.

Snoop’s motto has been reported to be “If the ride is more fly, then you must buy” and looking through his car collection, it’s clear he follows through on this rule of thumb. Which car is your favorite? Let us know in the comments below!