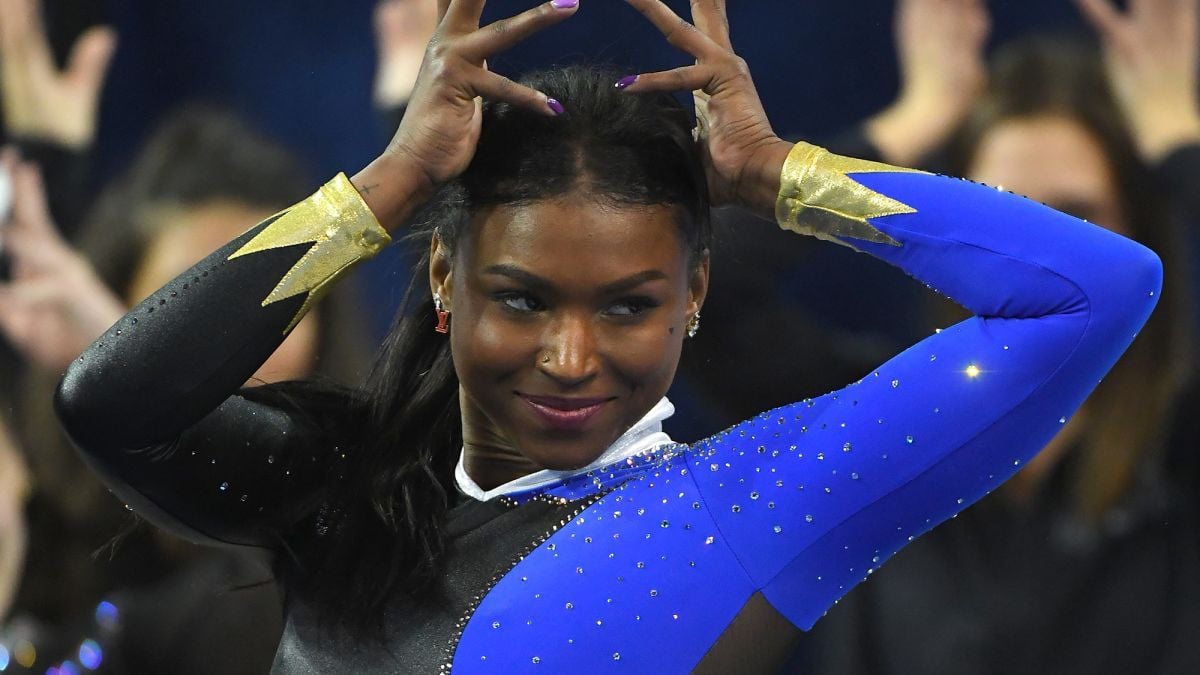 This wasn’t the first time Nia Dennis wowed the judges with an empowered black floor routine. Nia Dennis was also invited to The Ellen DeGeneres Show after her killer performance last year. Dennis’s 2020 homecoming floor routine featured a selection of Beyoncé songs, like “Crazy In Love” & “Ego”. According to The Los Angeles Times, the Queen B floor routine reached over 2 million views on Twitter in twenty-four hours. 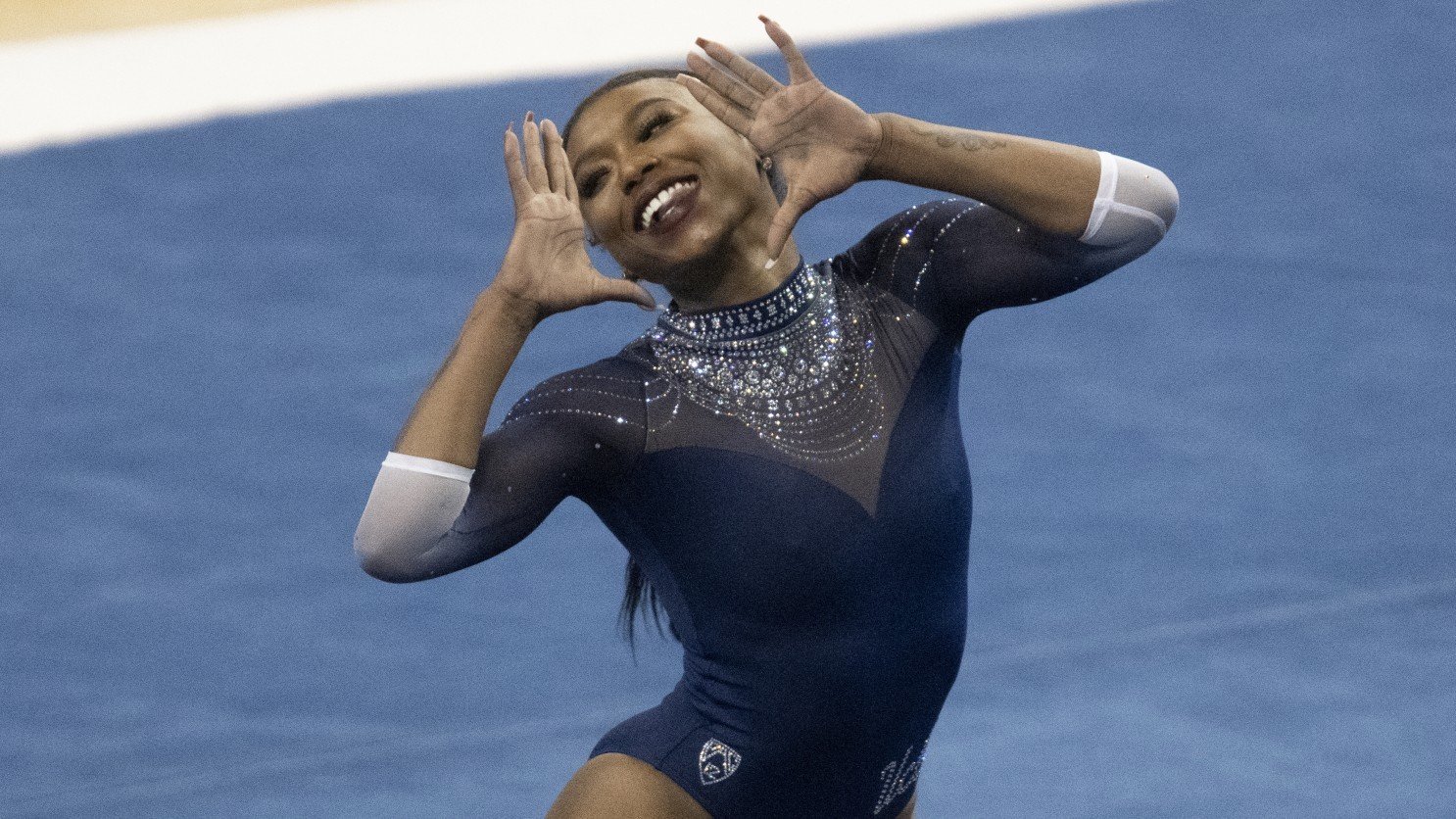 Not the first UCLA mashup

Nia Dennis’s former UCLA gymnastics teammate Katelyn Ohashi also reached millions of likes with her own mashup of artists like Ike & Tina Turner, Earth, Wind & Fire, and a combination of the infamous Jackson family. The Guardian reported that Ohashi’s mashup of 60s, 70s, and 80s music, alongside her incredible talent, earned her the perfect score of ten. However, Nia Dennis’s mashup may be one for the history books.

okay @DennisNia do the damn thing girl 🔥 this was so fun to watch! keep killing it! https://t.co/eDntwMpC4R

This weekend the U.S. gymnast reached a phenomenal score of 9.95 which helped the Bruins defeat Arizona State University in Saturday’s UCLA gymnastic competition.

Nia Dennis posted the clip of her floor routine on Instagram with the caption: “I had to…for the culture.” With the video quickly exploding all over social media, U.S Olympic gymnast Simone Biles tweeted: “Do the damn thing girl 🔥 this was so fun to watch! Keep killing it!” 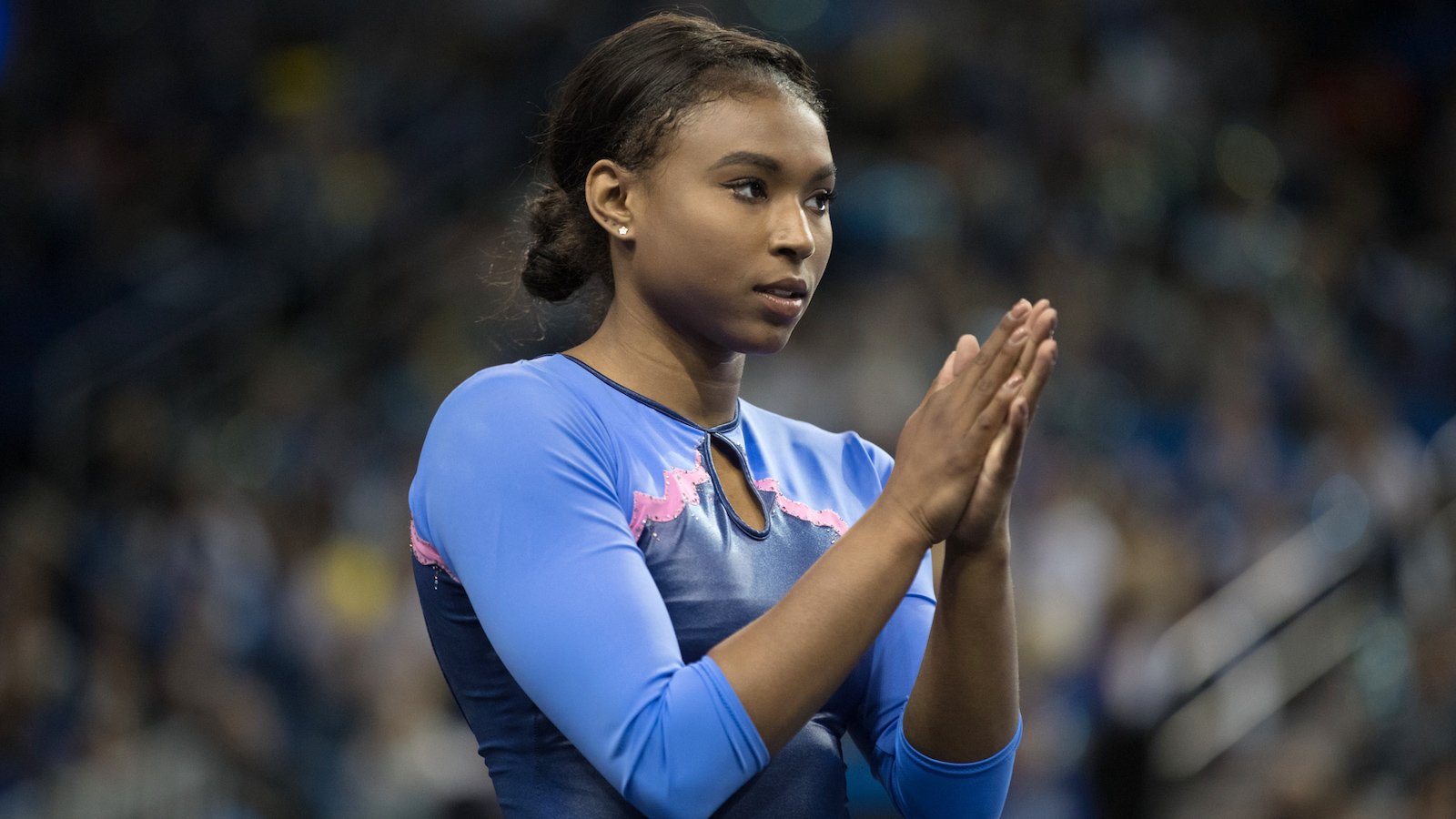 The UCLA gymnastic video has caught attention from the White House. Vice President Kamala Harris added: “@DennisNia is ending #BlackHistoryMonth the right way – by showcasing her Black excellence. Beyoncé herself would be proud.” 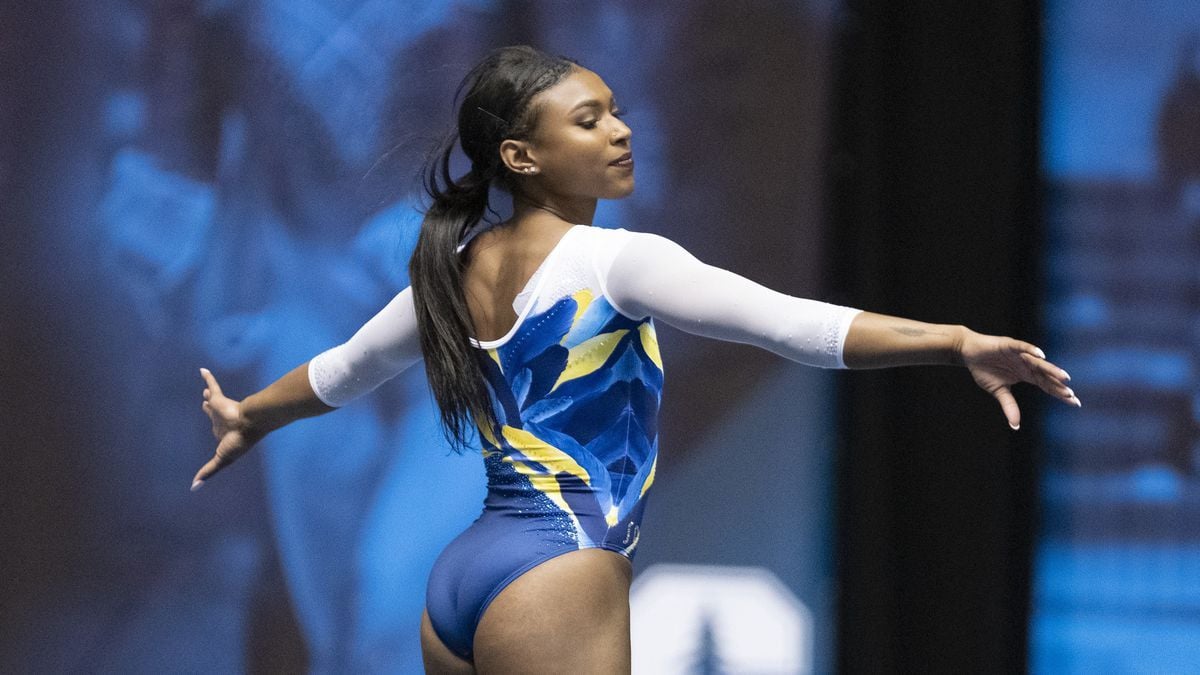 Nia Dennis was born and raised in Columbus, Ohio and created an “electric floor exercise and dance”. According to Huffpost, Dennis’s UCLA gymnastics dance routine was inspired by her California Black culture, and her Black Greek-lettered sororities & fraternities.

Nia Dennis didn’t come up with her routine overnight. The gymnast works with volunteer assistant coach BJ Das to create the perfect floor routines. Per Los Angeles Times, Das has had multiple careers as a former gymnast, dancer, and now choreographer. The Bruins assistant coach has also performed with popular American artists like Beyoncé, Pink, and Usher. 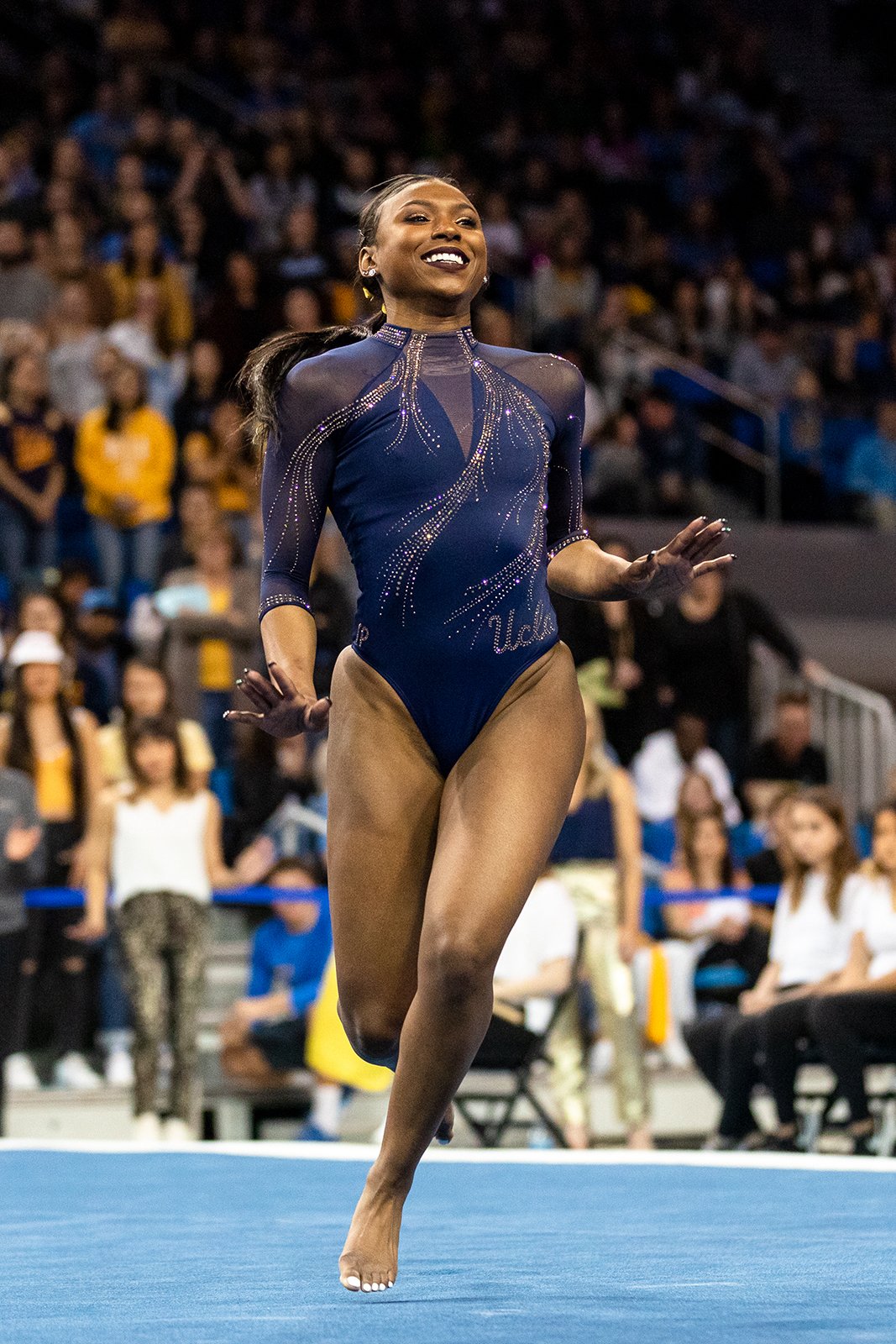 Last year was nothing like this year’s performance. In fact, The Los Angeles Times reminds us she actually wanted to have a “dance party” last year. That explains why this year, her teammates were actually dancing around the floor.

After the UCLA gymnastics competition, Nia Dennis told The Los Angele Times: “This routine definitely reflects everything I am today as a woman. Of course I had to incorporate a lot of parts of my culture”.

Because of @jvn love of gymnastics I found a love for the sport too! And this young woman from @uclagymnastics is a star! Who is she? pic.twitter.com/JmAAWyNCuq

Queer Eye’s Karamo Brown has the perfect reaction to Nia Dennis’s UCLA gymnastics performance. Brown tweeted: “Because of @jvn (Queer Eye’s Jonathan Van Ness) love of gymnastics I found a love for the sport too! And this young woman from @uclagymnastics is a star! Who is she?”

What did you think of Nia Dennis’s UCLA gymnastics floor routine? Let us know in the comments below. 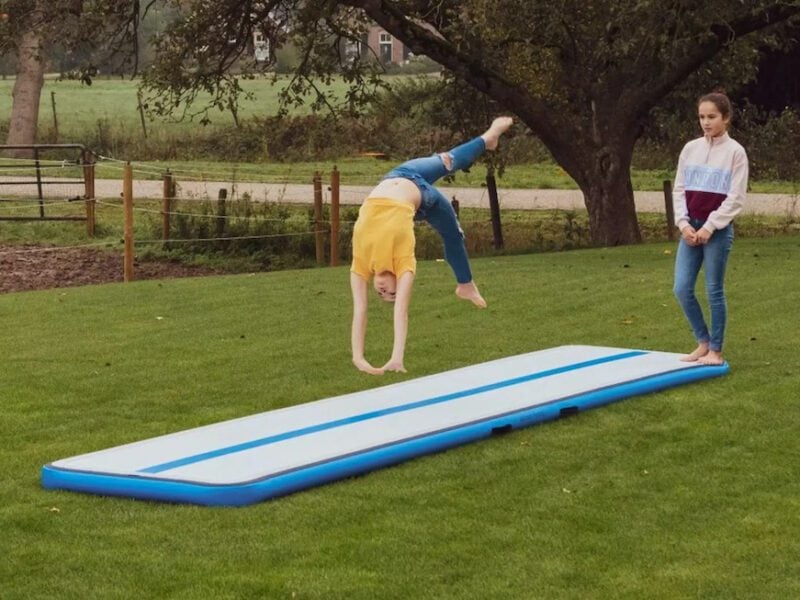 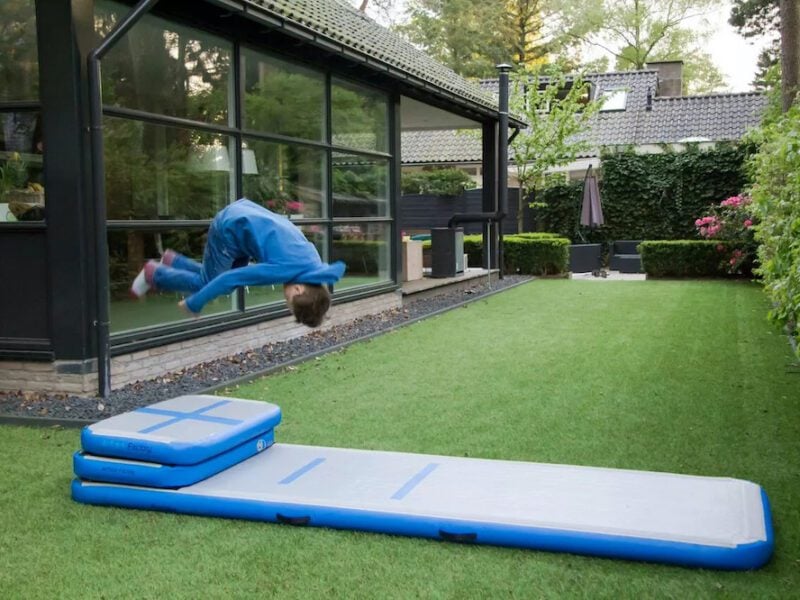