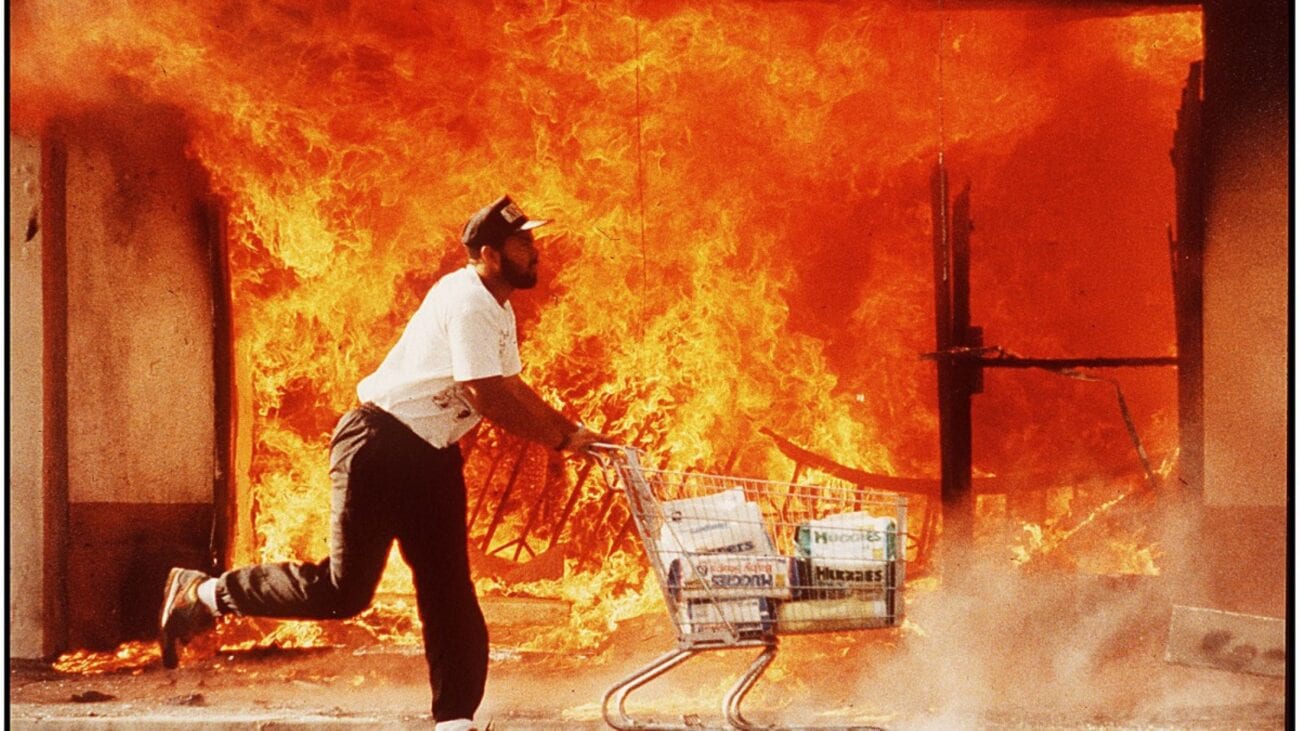 The awful tragedy sparking the L.A. Riots: What you should know

“Can’t we all get along?” This is the famous question asked by the man who endured the police brutality that sparked the L.A. Riots. Some of you may already recognize this as a quote from Rodney King.

While King himself wasn’t exactly a saint, to this day he’s considered somewhat responsible for the critical eye that has been turned on remaining racial abuses in the justice system, not only because of the beating he endured, but the way justice was not enacted. The L.A. Riots lasted for roughly three days in South-central L.A. It was one of the most destructive public uprisings to have occurred in twentieth-century United States of America.

We’re talking hundreds of fires and shootings that resulted in the death of over 50 people. By the end of the L.A. Riots, over 1 billion dollars in property damage had been perpetrated. It’s true that existing racial tension in the city served to inflame a situation already volatile, but most people agree that the not guilty verdict against Rodney King’s attackers is what sparked the L.A. Riots. 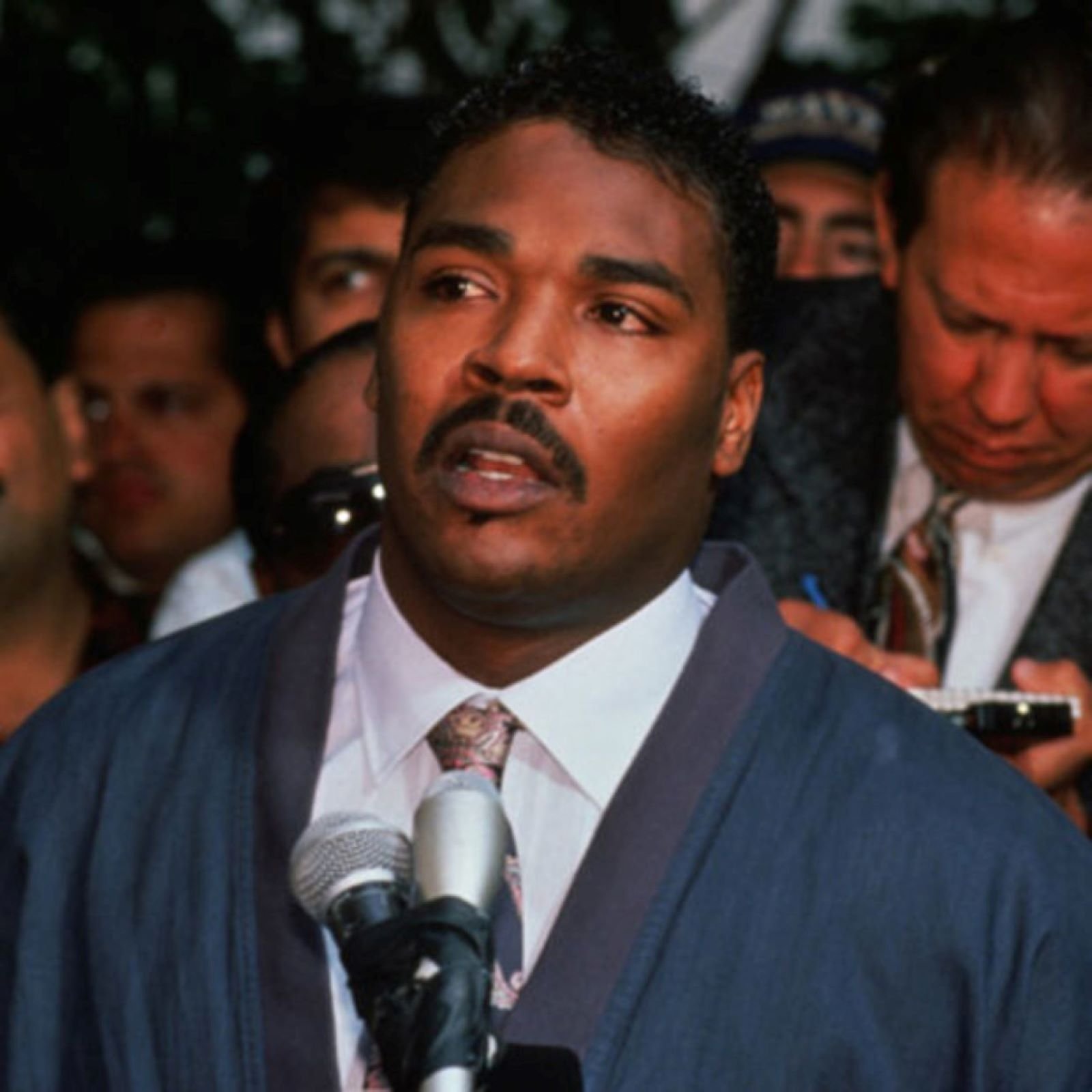 How the beating of Rodney King changed the police brutality conversation

On the evening of March 3, 1991, Rodney King fueled a high-speed police chase after refusing to pull over during a traffic stop. When King finally decided his fleeing was in vain, he pulled over in front of Hanson Dam Recreation Center.

There were two passengers with King at the time and officers proceeded to place them into a patrol car. King was the last to exit his vehicle and was displaying uncooperative behavior. Five white police officers surrounded King: Stacey Koon, Laurence Powell, Timothy Wind, Theodore Briseno, and Rolando Solano.

The beating that ensued was undoubtedly the use of excessive force. What the police officers didn’t know was that they were being filmed. These officers proceeded to tase King, beat him dozens of times with batons, and stomp on him. Each time King was struck, he foolishly tried to get up. When King at last lay motionless on the ground, the officers handcuffed him. As if the humiliation wasn’t enough, they hog-tied his legs too. 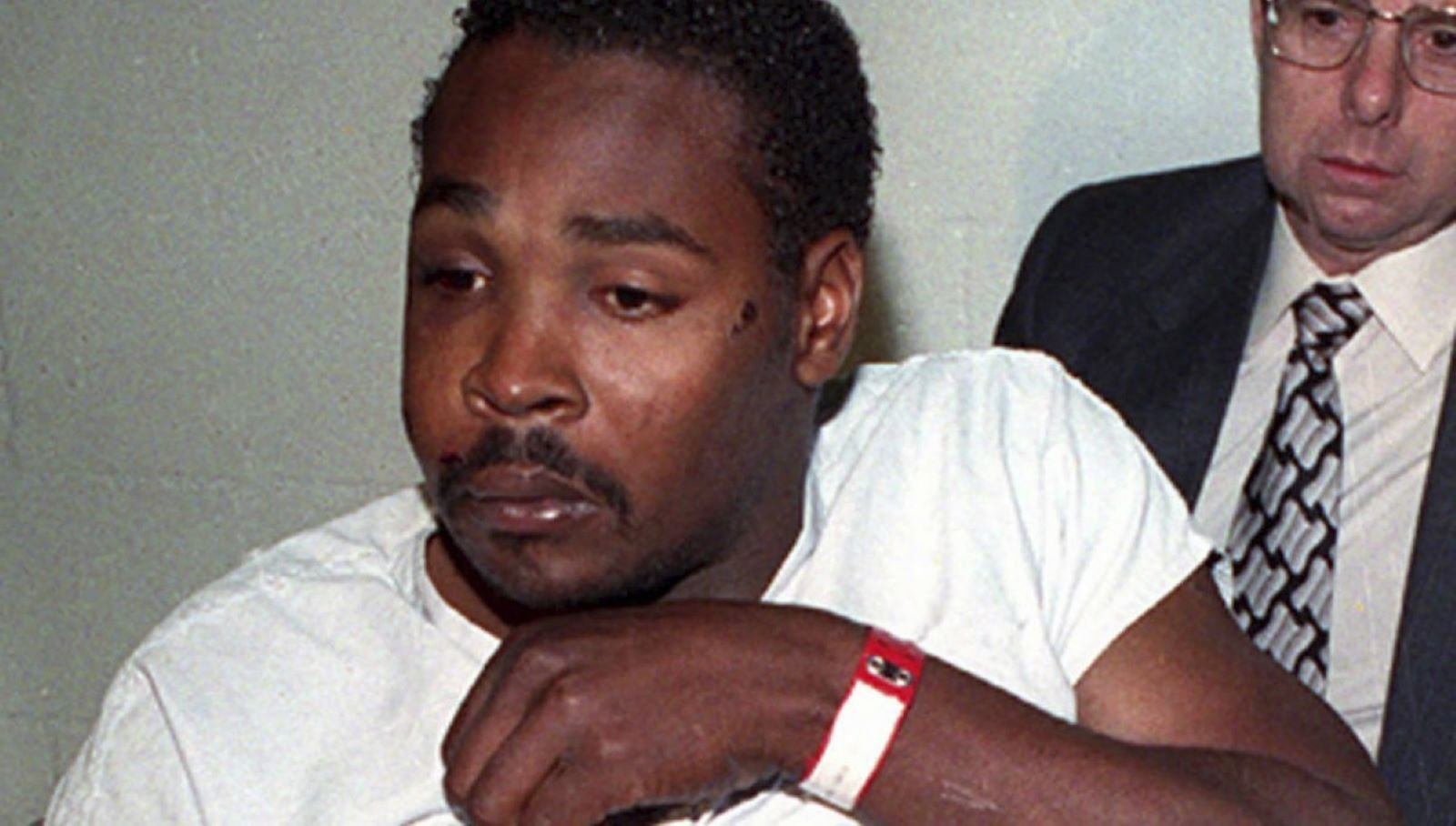 King later revealed that the reason he had initially refused to pull over was that he knew he was in violation of his parole. King had been convicted of assault and battery in the past and was on parole for a robbery conviction at the time. King was driving while intoxicated on March 3, thus effectively violating his parole.

Regardless of whether or not King was guilty, there was no excuse for the unbelievably cruel amount of force used during his apprehension. The policemen almost beat King to death as they blitzed him. The footage that local civilian George Holliday had captured of the beating only served to further enrage citizens when they heard the verdict for the four police officers received after being charged with assault & use of excessive force.

All four officers had been declared not guilty by a twelve-person jury, with the exception of the assault charge on Powell that ended up in a hung jury. The public was incensed. They wanted the continued use of police brutality to end and felt the justice system had failed them yet again. This time citizens chose not to stand idly by. 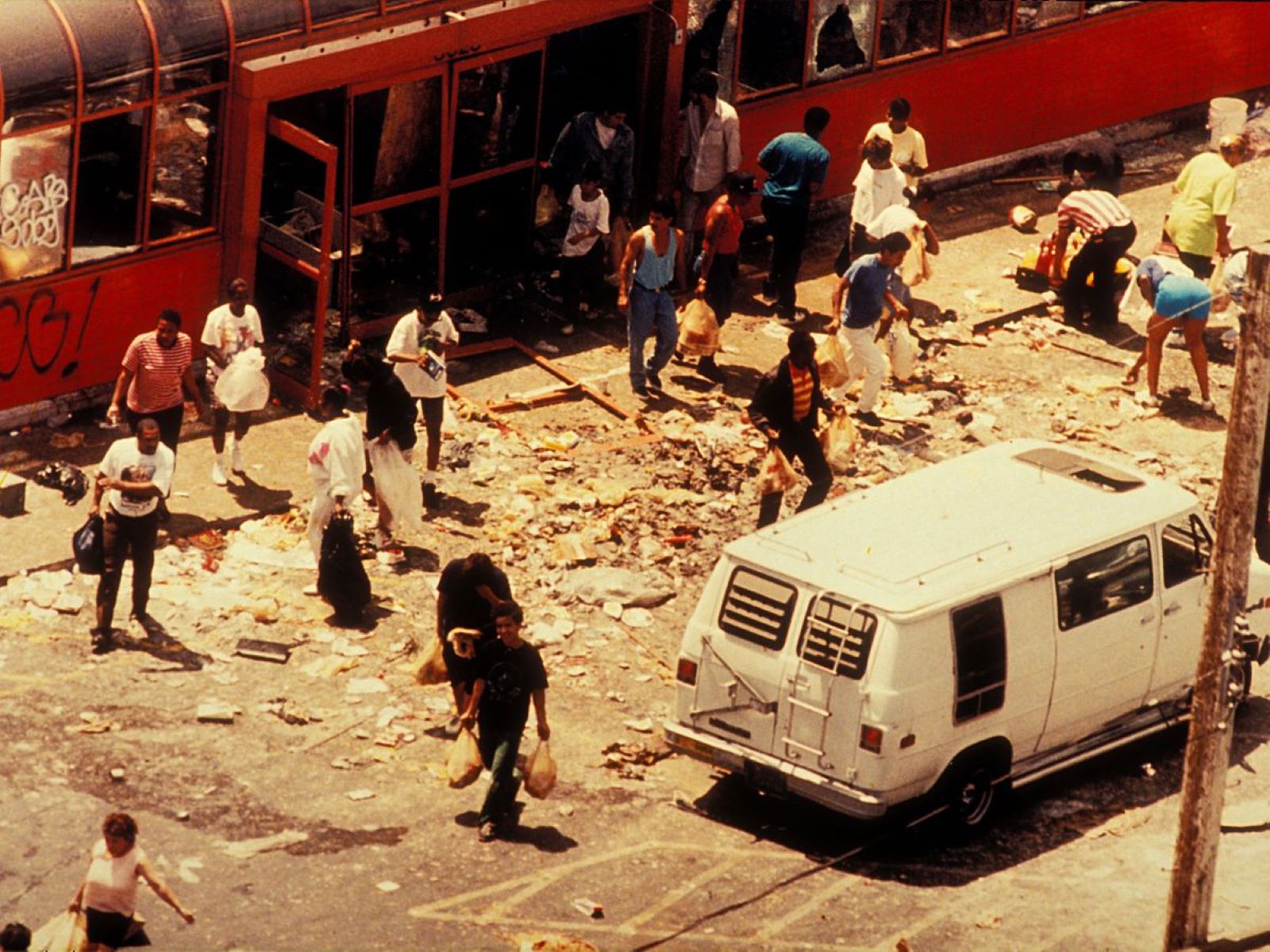 The existing racial tensions that further fueled the L.A. Riots

The methods used to show displeasure at the racial injustice so brazenly displayed & tolerated were questionable to say the least. Minorities set fires, engaged in shootings, looted stores, and took part in various methods of property damage. It’s arguable that one of the most unfortunate parts of the riots was the fact that much of the damage inflicted by African Americans was against a fellow minority group: Korean Americans.

Many Koreans had taken residence in the United States after the horrible civil conflict that had ravaged their own country and left them feeling displaced. As a result, many Korean Americans had set up shop in cities like L.A. A large part of the African American community there, who already felt disenfranchised in various ways by their government, didn’t take kindly to their new neighbors.

Many felt disrespected by the Korean Americans they encountered. A large part of this misunderstanding had to do with differences in culture. When Korean store owners did things like drop change on the counter instead of into African Americans’ hands or refuse to call them by name, it’s quite possible African Americans felt the Koreans in their community were just one more ethnic group treating them as less than. 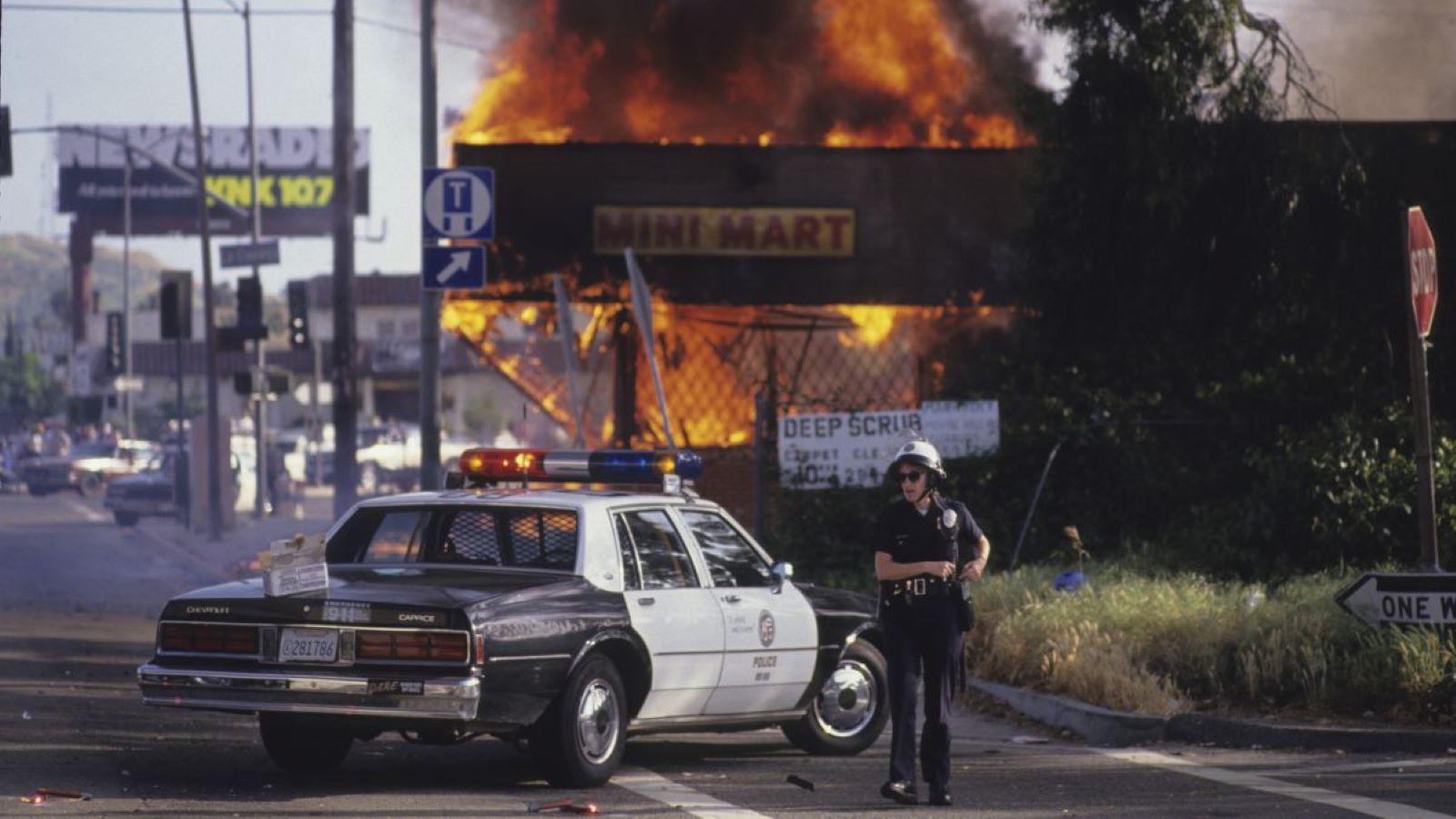 This lack of understanding between ethnic groups resulted in a lot of property damage being carried out against Korean-owned businesses in Koreatown. The hostility that had grown in both the African American and Korean communities had explosive effects. The further ignition of riots was an ill-fated consequence of existing racial tensions during a time of upheaval. 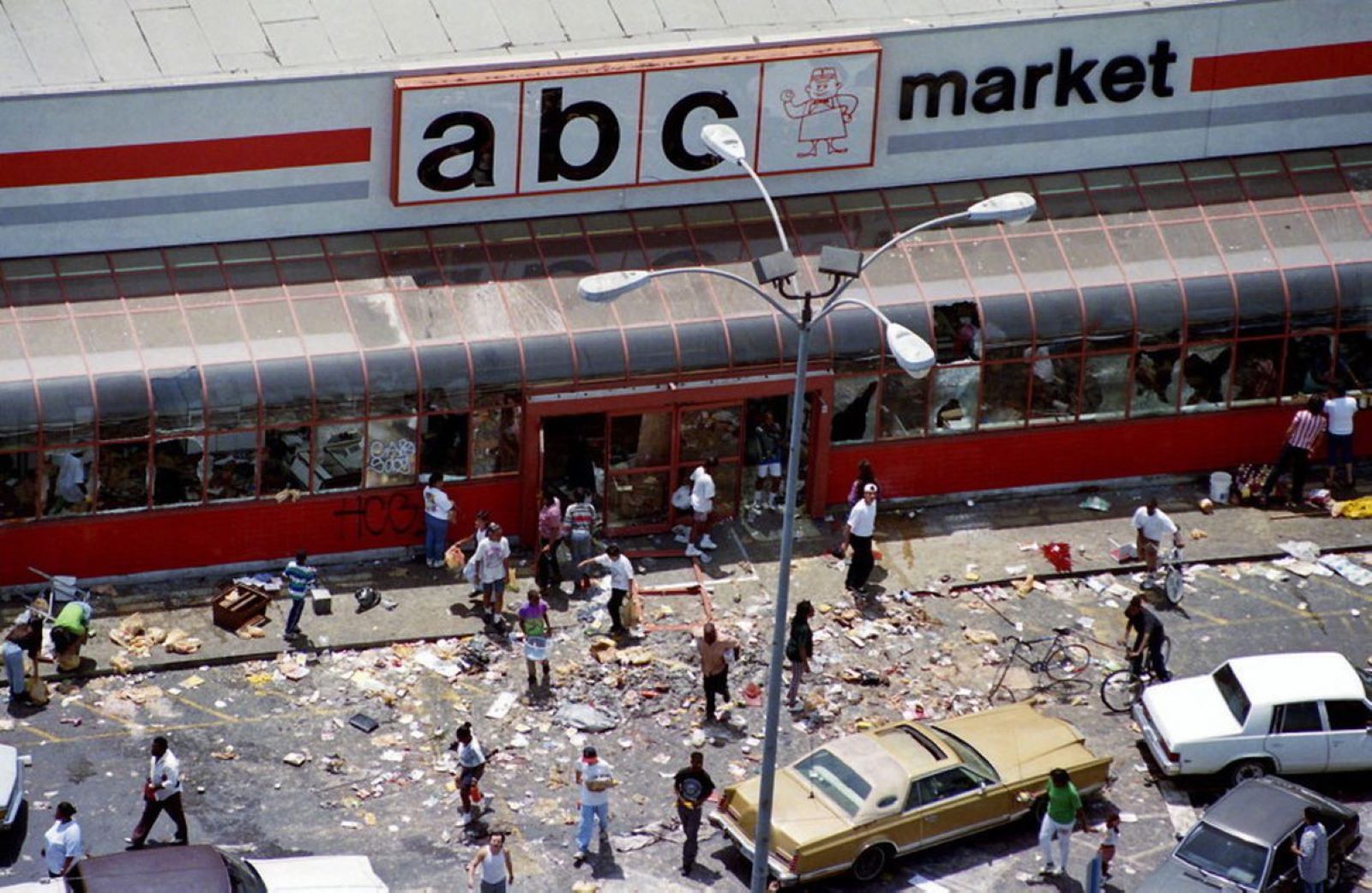 The L.A. Riots lasted about three days. Law enforcement basically practiced a strategy of containment. A lot of the whiter neighborhoods did not see the worst of the rioting. Eventually troops were called in by President Bush to tamp down further on the civil unrest.

In due course, things calmed down. A dusk to dawn curfew that had been put into place during the L.A. Riots was lifted. The police officers involved in Rodney King’s beating were re-tried by a federal court. On April 17, 1993, a federal jury convicted Koon and Powell of using excessive force and violating King’s rights. They were subsequently sentenced to two and a half years in prison.

Although police officers Wind and Briseno were acquitted, it was seen as a victory in the eyes of many civil rights advocates that some justice had finally been served.