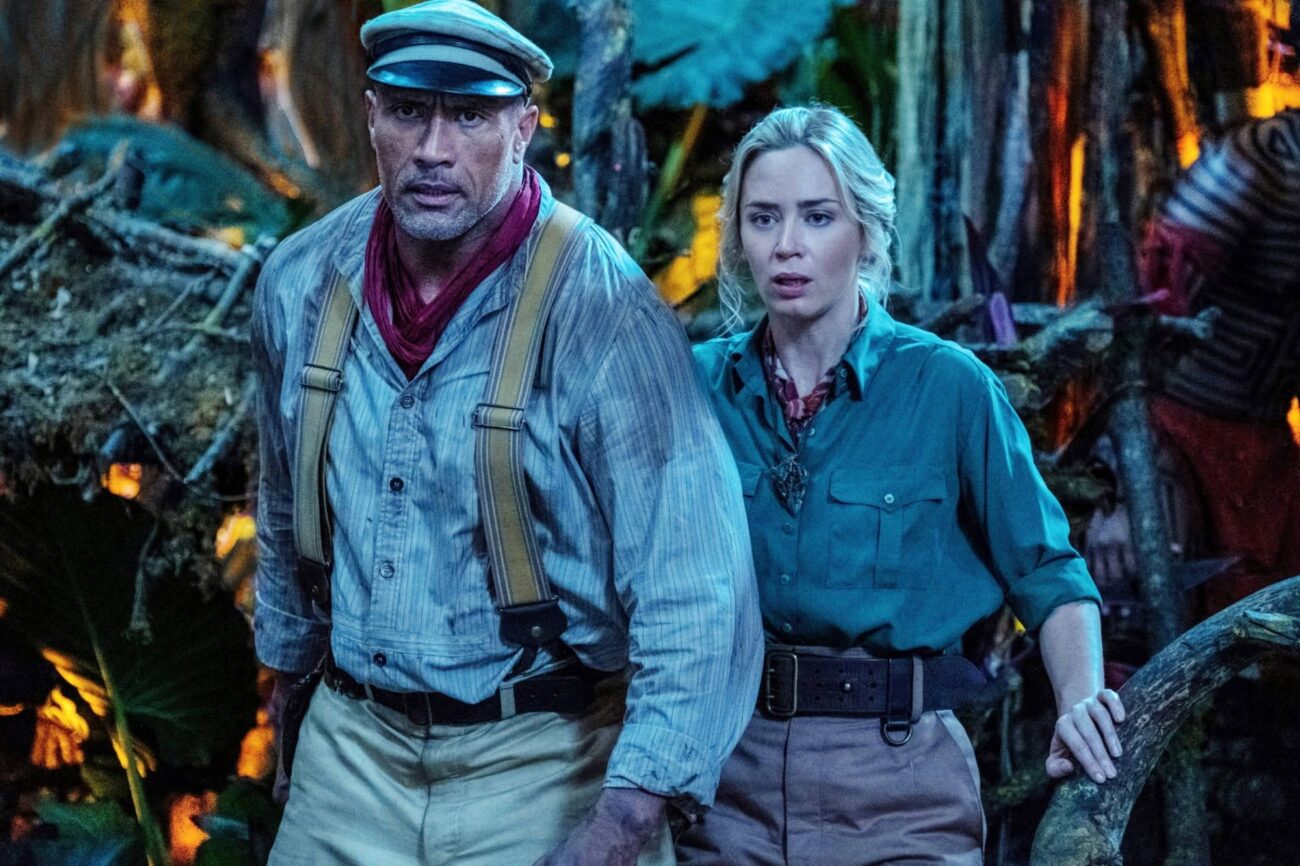 Racism, ahoy! Disney has released the Jungle Cruise movie and fans are unhappy to see a familiarly racist face. It’s a disheartening addition in light of Disneyland’s bold move to remove overt racism from their theme parks.

The Jungle Cruise movie follows the mystical adventures of Dr. Lily Houghton (Emily Blunt) & Frank Wolff (Dwayne Johnson). As they traverse the Amazon in a dilapidated boat, they encounter all manner of eccentric characters – such as Trader Sam.

Therein lies the problem. The Jungle Cruise movie attempts to rebrand the iconically racist character. Did it reimagine a character formerly steeped in caricature? Or did it just give the problematic character a broader audience? 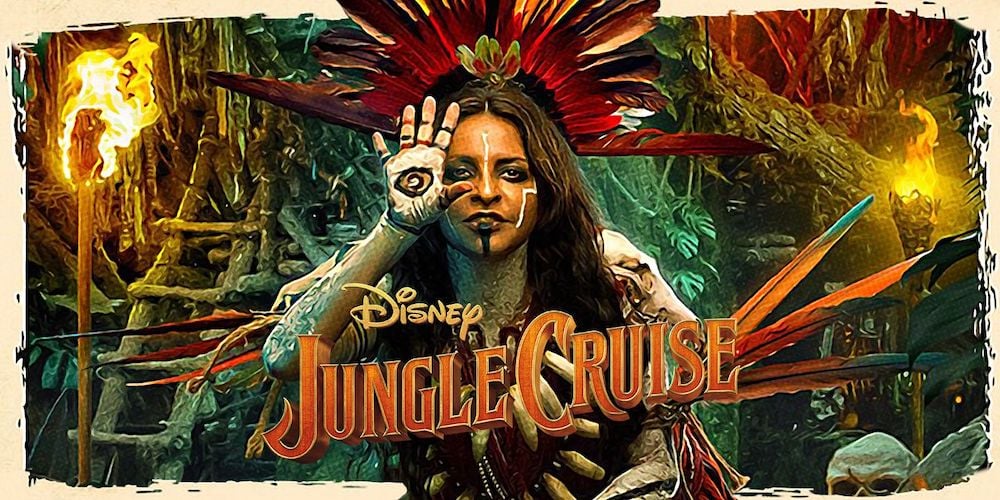 The backside of water

The Jungle Cruise movie is action-packed and fun for the whole family. Houghton & Wolff are on a journey to find a fabled ancient tree with healing powers to improve modern medicine.

Trader Sam (Veronica Falcón) is initially introduced as very similar to the original Disneyland character. Other than a gender flip, Trader Sam is still a caricature of an Indigenous person.

However, this image of Trader Sam is subverted with a plot twist reveal. Trader Sam isn’t actually a caricature. Rather, she uses people’s racist expectations against them to scare them off. Yet, how can a character still leaning into a racist caricature truly subvert it? 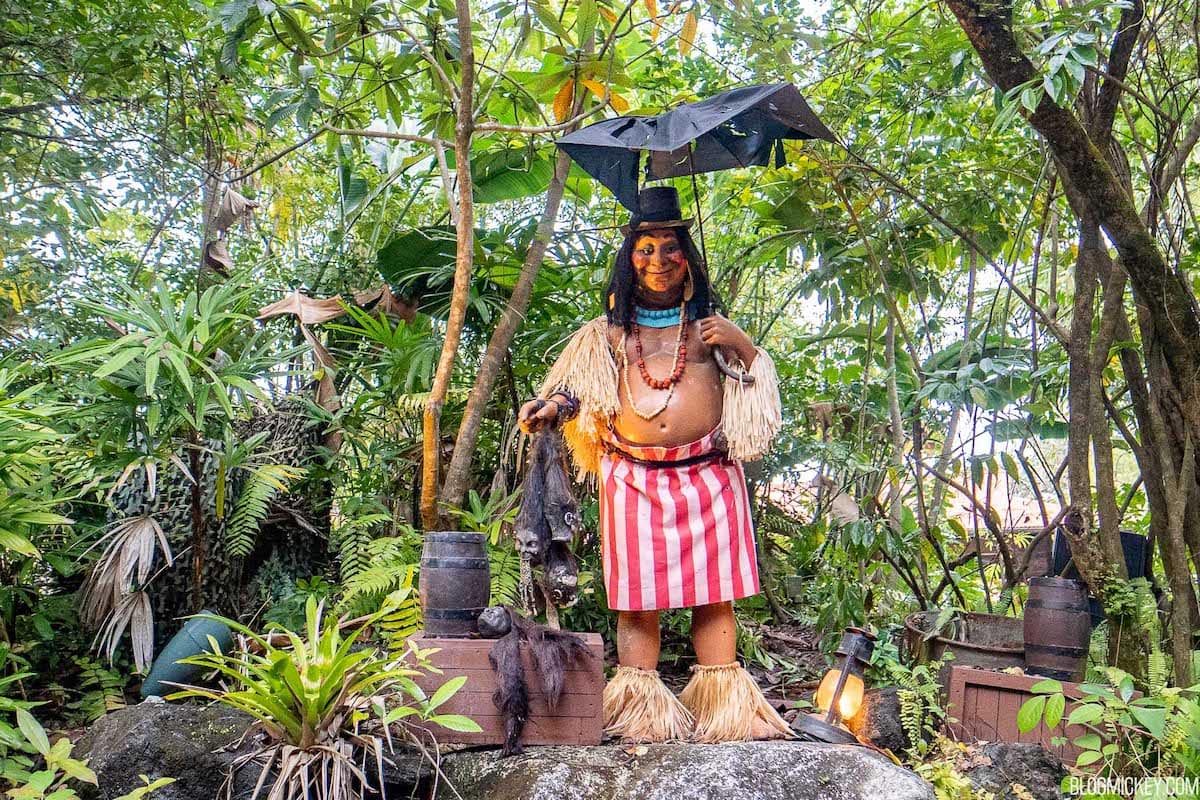 Disneyland has recently undergone a variety of changes – virtual & otherwise – in light of changing public ideals. They removed the crows from Dumbo on Disney Plus. They also removed Trader Sam from the Jungle Cruise attraction.

The racist depiction of an Indigenous person has raised eyebrows for years. Yet, Disneyland moved to deal with the issue while under public scrutiny. The Jungle Cruise movie was a catalyst, but the move was a long time coming.

Disneyland is rebranding itself as socially conscious. The Jungle Cruise movie has seemingly attempted to do the same. Yet, one can’t help but wonder how socially conscious a movie can be toward a character it barely uses. 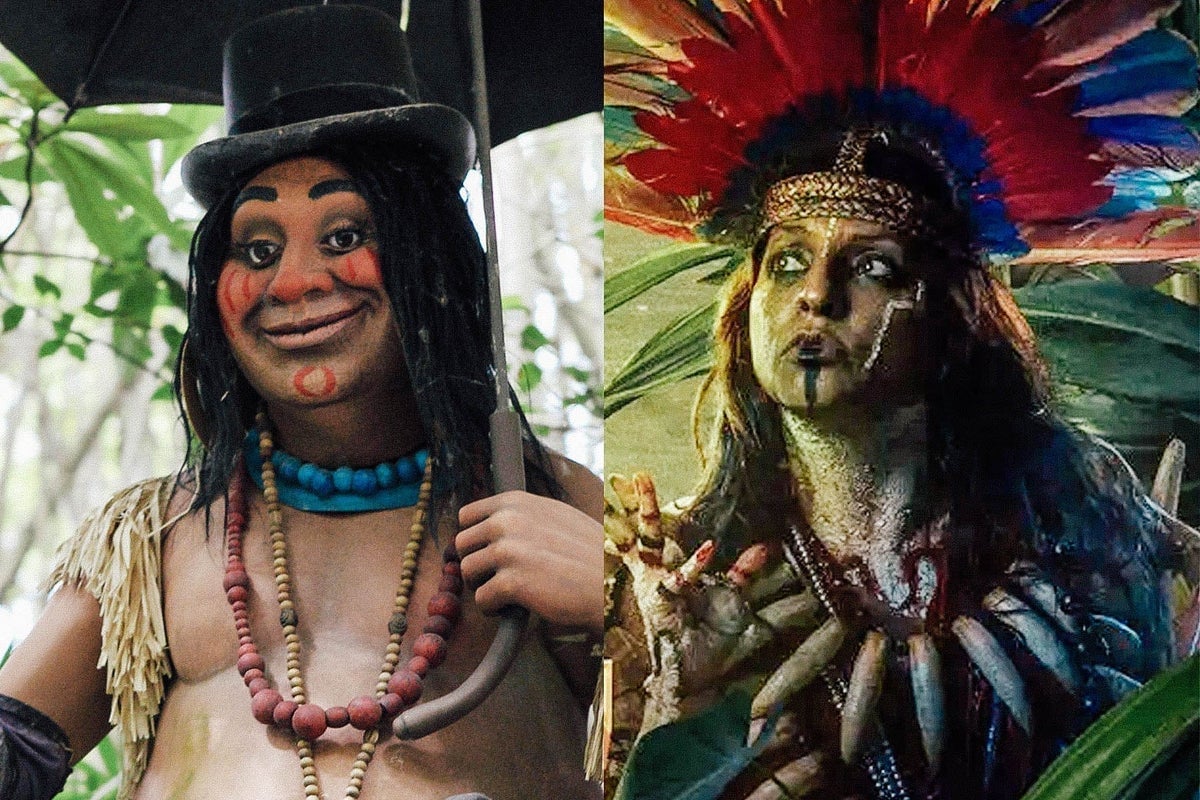 As a character in the Jungle Cruise movie, Trader Sam was an attempt to subvert a caricature. She was a reflection of increasingly progressive ideals adopted by the Disneyland brand.

Yet, Trader Sam arguably doesn’t do much beyond not being a stereotype. On the one hand, she is intelligent, independent, and has a sharp sense of humor. On the other hand, though, she’s neither part of the main plot nor more complex beyond not being a caricature. 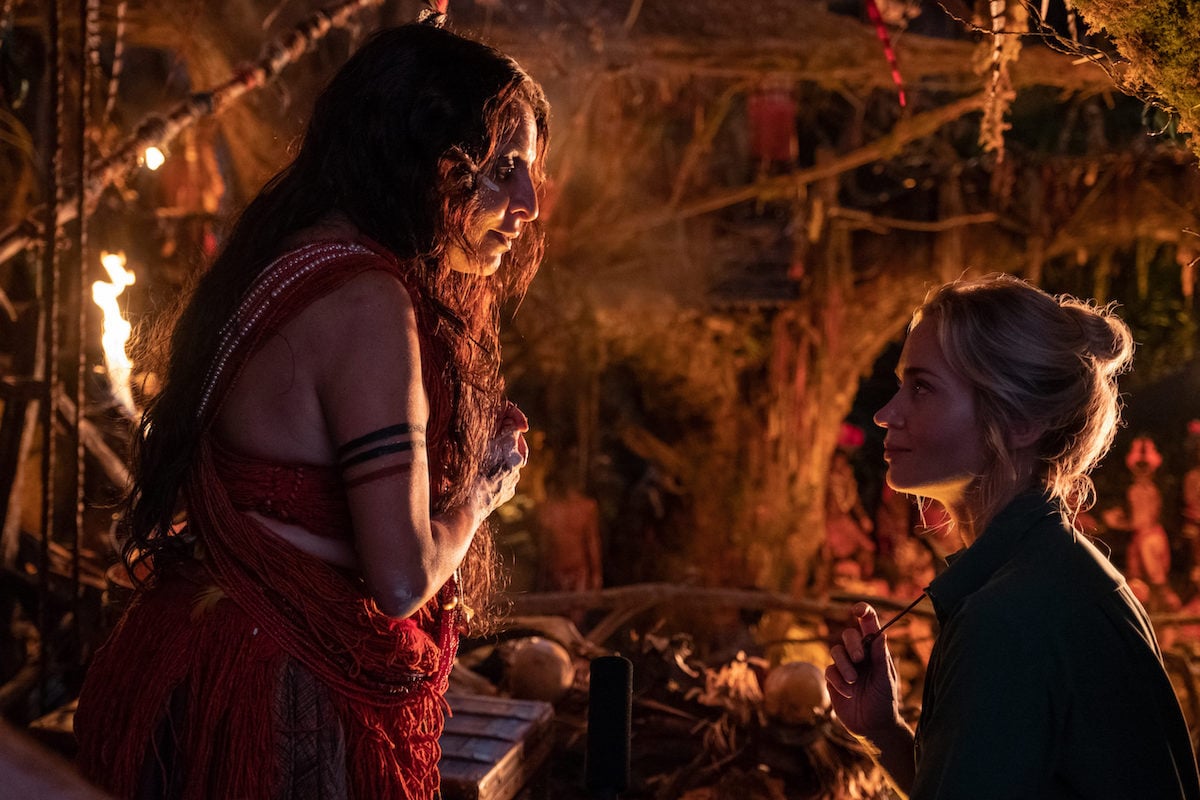 Why does Trader Sam lean into the Indigenous stereotypes to scare tourists? What led up to her taking this task? The Jungle Cruise movie never reveals her motive or backstory. The ride was recently revamped, but it seems the racist legacy persists. 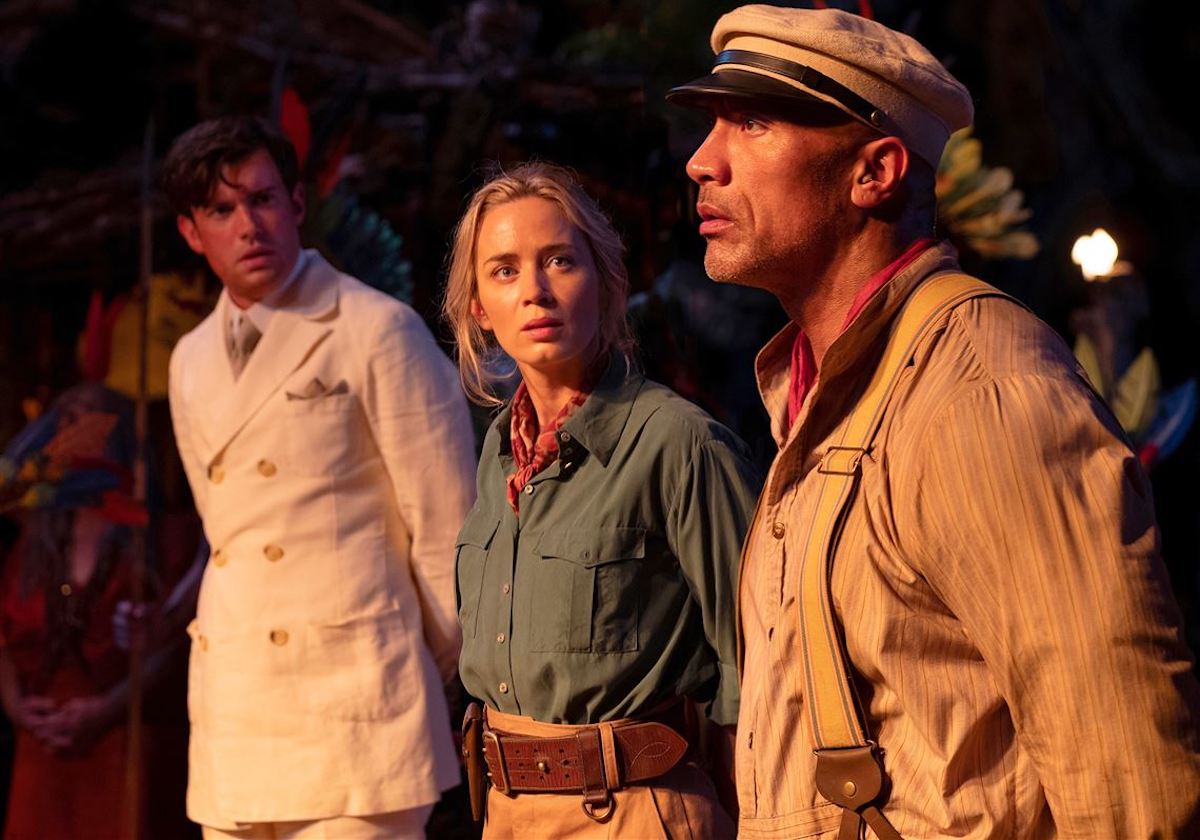 Disneyland isn’t alone in trying to revamp its brand. We’re living in the golden age of social media callouts. Companies not practicing socially-conscious behavior are quickly subjected to public scrutiny.

However, there’s a difference between being performatively progressive and actually practicing progressive ideals. Disneyland & the Jungle Cruise claimed to do the latter, but it seems like they were really performing.

The depiction of Trader Sam in the Jungle Cruise movie may not be as racist as the Disneyland attraction character. This is a low bar, especially considering the original character only smiled and offered shrunken heads in lieu of an actual personality.

What do you think about Trader Sam in the Jungle Cruise movie? Is she just as racist as the original? Or is she an improvement? Let us know in the comments below!