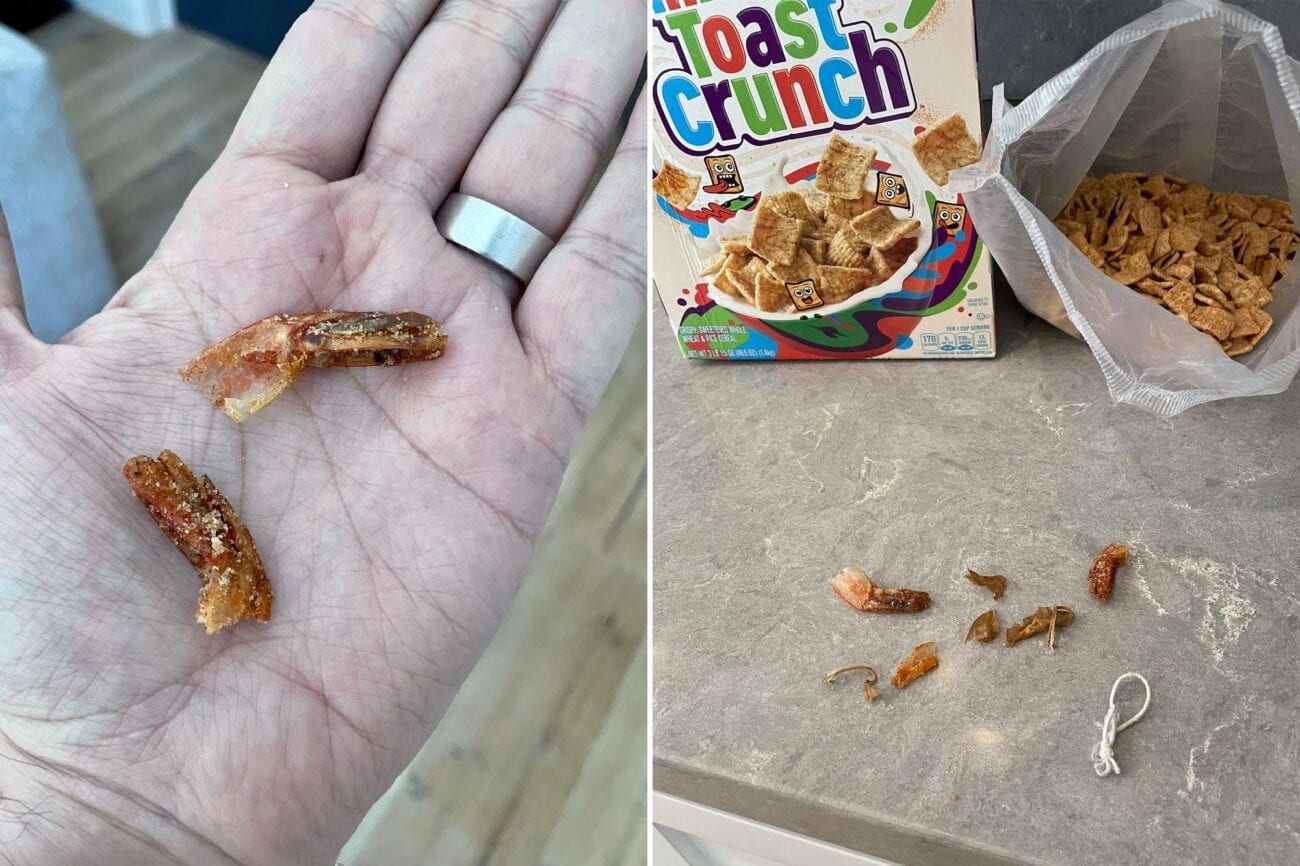 Is General Mills forgetting to do quality control on their products?

Of course, this story comes from Twitter, but it may have ruined the delicious General Mills breakfast cereal for us. Comedian & podcaster Jensen Karp tweeted a picture of those tasty golden squares on their kitchen table and in the middle, like a fleet of whales descending back into the ocean, were two fried shrimp tails caked in cinnamon goodness. 🍤

The folks at General Mills responded via Cinnamon Toast Crunch’s Twitter page asking for more details, but as more shrimp appeared in our Twitter feed (and more Twitter users swapped stories about the weird things they’ve found in package food), we had to ask, who’s sleeping on the job in quality control? Or whether this story is fake news prepping us for April Fools Day fakeries. Let’s dive in.

Ummmm @CTCSquares – why are there shrimp tails in my cereal? (This is not a bit) pic.twitter.com/tTjiAdrnVp

According to General Mills’ site, they boasted a commitment to food safety, saying it’s “part of our culture”. Their timeline detailed they won the Black Pearl Award (no relation to the other Black Pearl) in food safety excellence in 2019.

General Mills also declared they “bring together our suppliers around the world to share food safety knowledge and communicate food safety expectations.” They also claimed they conduct multiple yearly third-party audits, more than 400 food safety experts on their staff, and pioneering in food safety, including developing HACCP – Hazard Analysis and Critical Control Points, calling it “the gold standard” in food safety.

Since no gold standard is perfect, sometimes mistakes happen. However, this isn’t the first time a fishy stowaway has been found in General Mills products or their supply chain.

Not their “first shrimp rodeo”

A Twitter user reported General Mills had a shrimp problem in their products. In 2009, a whole shipment of Michigan-based blueberry company Adkin Blue Ribbon Packing Company was found contaminated with shrimp before being sent to a General Mills plant to make scones. General Mills sued the supplier over the shrimpy shipment.

These children were reportedly seen working in their blueberry fields hauling bags of blueberries. In response to the investigation, Wal-Mart severed ties with Adkins “pending the outcome of an investigation by our ethical sourcing team” per a spokesperson, declaring they “ will not tolerate the use of child labor”.

UPDATE: my wife has a stronger stomach than me and checked the OTHER bag in the family pack. This one seems taped up (?) and also appears to include…(I don’t even want to say it)…dental floss. pic.twitter.com/yKPkpx7PWq

Jensen Karp claimed he bought two boxes of Cinnamon Toast Crunch at Costco and one appeared to have been resealed with tape. He also claimed his wife found what appeared to be dental floss in one of the General Mills boxes. Understandably, when the cereal offered Karp another box, he didn’t bite.

Then, after rejecting their peace offering, General Mills released the following statement: “It appears to be an accumulation of the cinnamon sugar that sometimes can occur when ingredients aren’t thoroughly blended . . . We assure you that there’s no possibility of cross-contamination with shrimp.”

Ok, we’ll after further investigation with my eyes, these are cinnamon coated SHRIMP TAILS, you weirdos. I wasn’t all that mad until you now tried to gaslight me? https://t.co/7DmADmoqUt pic.twitter.com/rSLE60pvoy

In response to General Mills’ further claims the shrimp tails were sugar clumps, Jensen Karp posted a closer picture of the offending items and to us, yep, those are shrimp tails. General Mills then asked, per dexerto.com, to send him the pieces of shrimp in the mail, offering up more olive branches in the form of vouchers.

General Mills got back to TMZ this morning about the shrimp allegedly swimming in Karp’s Cinnamon Toast Crunch pond. They told the news outlet the shrimp pieces weren’t from them.

“While we are still investigating this matter, we can say with confidence that this did not occur at our facility. We are waiting for the consumer to send us the package to investigate further. Any consumers who notice their cereal box or bag has been tampered with, such as the clear tape that was found in this case, should contact us”, a rep told TMZ earlier that day.

It remains to be seen where this fishy incident occurred along the supply chain. Meanwhile, we will leave you with some words of wisdom from comedian Patton Oswalt on the matter above.

Have you ever found anything disgusting in your food, packaged or otherwise? If so, share your story in the comments below!