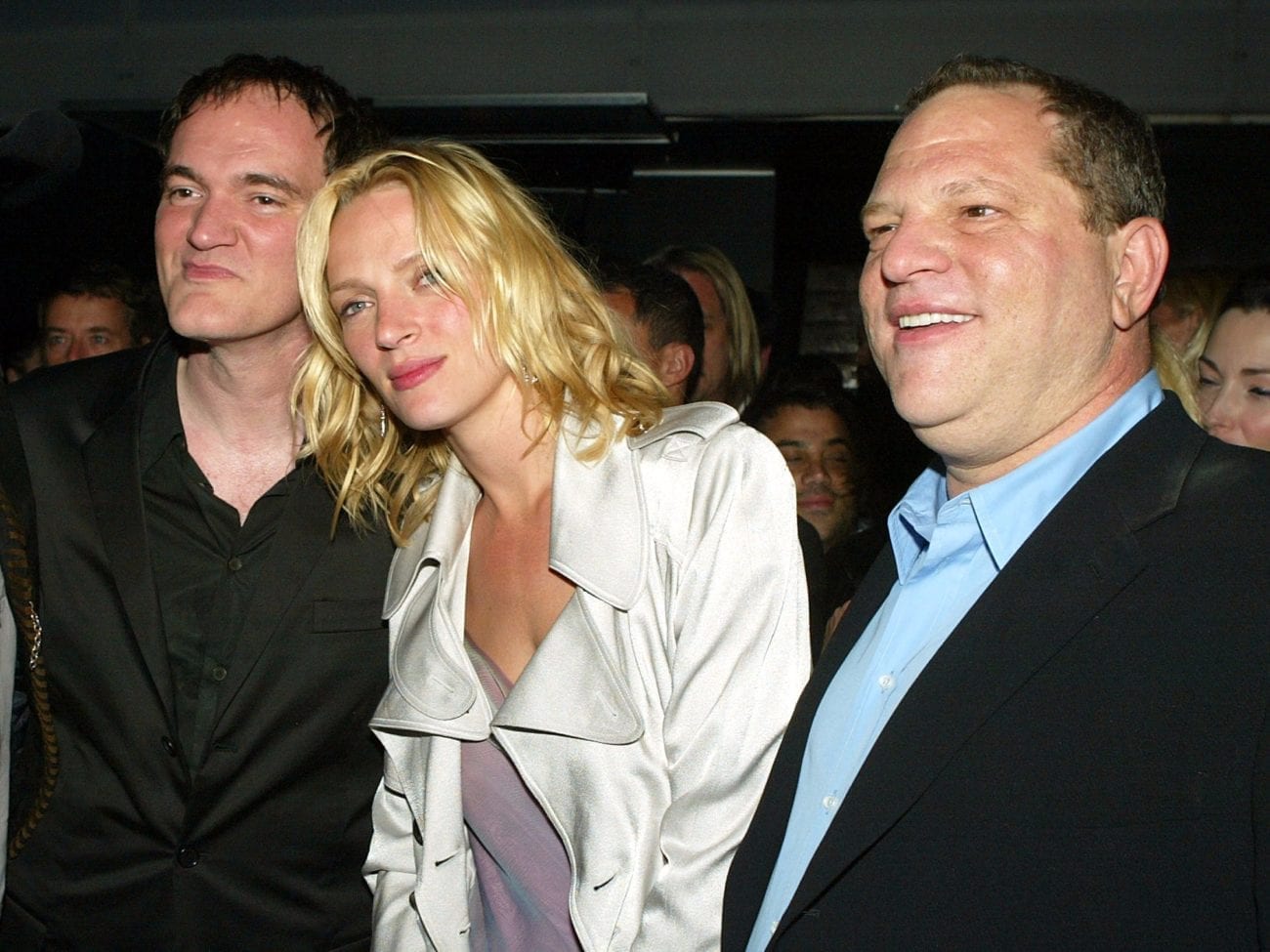 #MeToo: Everything we learned from Uma about the Weinstein Company boys’ club

In a November interview with Access Hollywood, actor Uma Thurman revealed she was “waiting to feel less angry” until she could talk about sexual harassment and assault in Hollywood – a moment that appears to have arrived this past weekend. On February 3, The New York Times published an interview between Thurman and Maureen Dowd in which the powerhouse actor shared harrowing allegations of sexual misconduct against Harvey Weinstein and chilling claims of an abrasive working relationship with Quentin Tarantino.

Thurman’s career was arguably launched by her performance as Mia Wallace in Tarantino’s 1994 indie hit Pulp Fiction. Around a decade later, she further cemented her status as a ferocious screen icon playing Beatrix Kiddo, the vengeful bride of Tarantino’s Kill Bill Vols 1 & 2.

Thurman was the golden girl of the Weinstein Company as it enjoyed its first major financial success from Pulp Fiction. She was also regarded as Tarantino’s muse, the director describing their “auteur-muse” relationship as an “Alfred Hitchcock–Ingrid Bergman legend.”

However, as the article suggests, “. . . beneath the glistening Oscar gold, there was a dark undercurrent that twisted the triangle.” Here’s everything we know about Thurman’s allegations in this developing story.

Thurman described how she “didn’t feel threatened” during a strange argument in Paris she claims ended with Weinstein throwing on a bathrobe and leading her to a steam room. Calling the spectacle “ridiculous”, Thurman alleged Weinstein got “very flustered and mad and he jumped up and ran out.”

Not long after this, Thurman reported the next alleged encounter was more physical, “such a bat to the head”. She explained: “ . . . he pushed me down. He tried to shove himself on me. He tried to expose himself. He did all kinds of unpleasant things.” According to Thurman, Weinstein sent a “26-inch-wide vulgar bunch of roses” to her the next day with the note: “You have great instincts.”

Thurman was apparently assured by Weinstein that the previous encounter was a misunderstanding. The actor claimed she warned Weinstein, “If you do what you did to me to other people you will lose your career, your reputation and your family, I promise you.”

Though Thurman’s memory of the incident that followed her warning is described as “abruptly” ending there, a friend described how Thurman was “very disheveled and so upset and had this blank look” after leaving his room. When she was able to talk again, Thurman apparently divulged that Weinstein had threatened her career.

Weinstein’s behavior’s warning signs; Thurman feels bad about “all the women” he allegedly attacked after her

Thurman disclosed she and Weinstein knew each other for a long while before the first alleged attack took place; she even perceived him as her “champion”. Weinstein’s habit of “validating” her by “complimenting” her mind made Thurman possibly “overlook warning signs”: “. . . he had a chokehold on the type of films and directors that were right for me.”

Thurman suggested that “Quentin used Harvey as the executive producer of Kill Bill, a movie that symbolizes female empowerment”, musing that young women were “lambs walked into slaughter” as a result. “They were convinced nobody rises to such a position who would do something illegal to you, but they do.” Thurman further lamented: “I am one of the reasons that a young girl would walk into his room alone, the way I did.”

In 2001, around the the time they were trying to make Kill Bill, Tarantino apparently acknowledged how Thurman was acting “skittish” around Weinstein. Reminding him of the London incident, which Thurman suggested she’d already told him about, Tarantino apparently “confronted” Weinstein, who subsequently offered Thurman a “half-assed apology”.

With four days left of shooting, Thurman was apparently coerced by Tarantino to operate a car she didn’t feel comfortable driving on a difficult stretch of sand road. The director apparently instructed she “hit 40 miles per hour” so her hair would “blow the right way.” Thurman described the car as a “deathbox” with an improperly secured seat.

In footage that apparently took Thurman 15 years to receive, the actor is shown struggling to drive the car before smashing into a palm tree. “The steering wheel was at my belly and my legs were jammed under me . . . . I felt this searing pain and thought, ‘Oh my God, I’m never going to walk again.’” The shot shows beaming with relief as she manages to step out of the car. The injuries Thurman sustained in the crash have apparently caused permanent damage to her neck and knees.

Thurman explained Tarantino and Weinstein turned on her after the accident. “I went from being a creative contributor and performer to being like a broken tool.” Tarantino allegedly performed some of the “sadistic flourishes” of Kill Bill himself, such as spitting in her face – in place of Michael Madsen’s character – and choking Thurman with a chain for another scene involving the character GoGo.

In an initial response to the article, Weinstein’s spokesperson released a statement in which the initial “bathrobe” incident in Paris is described as a “flirtatious exchange” the producer “deeply regrets”. As reported by Deadline, the implication is Thurman’s “claims about being physically assaulted are untrue”.

The statement was released with a series of pictures “that demonstrate the strong relationship Mr. Weinstein and Ms. Thurman had had over the years” showing the two together in party surroundings. A few hours following this statement, Weinstein’s attorney revealed, “Ms. Thurman’s statements to the Times are being carefully examined and investigated before deciding whether any legal action against her would be appropriate.”