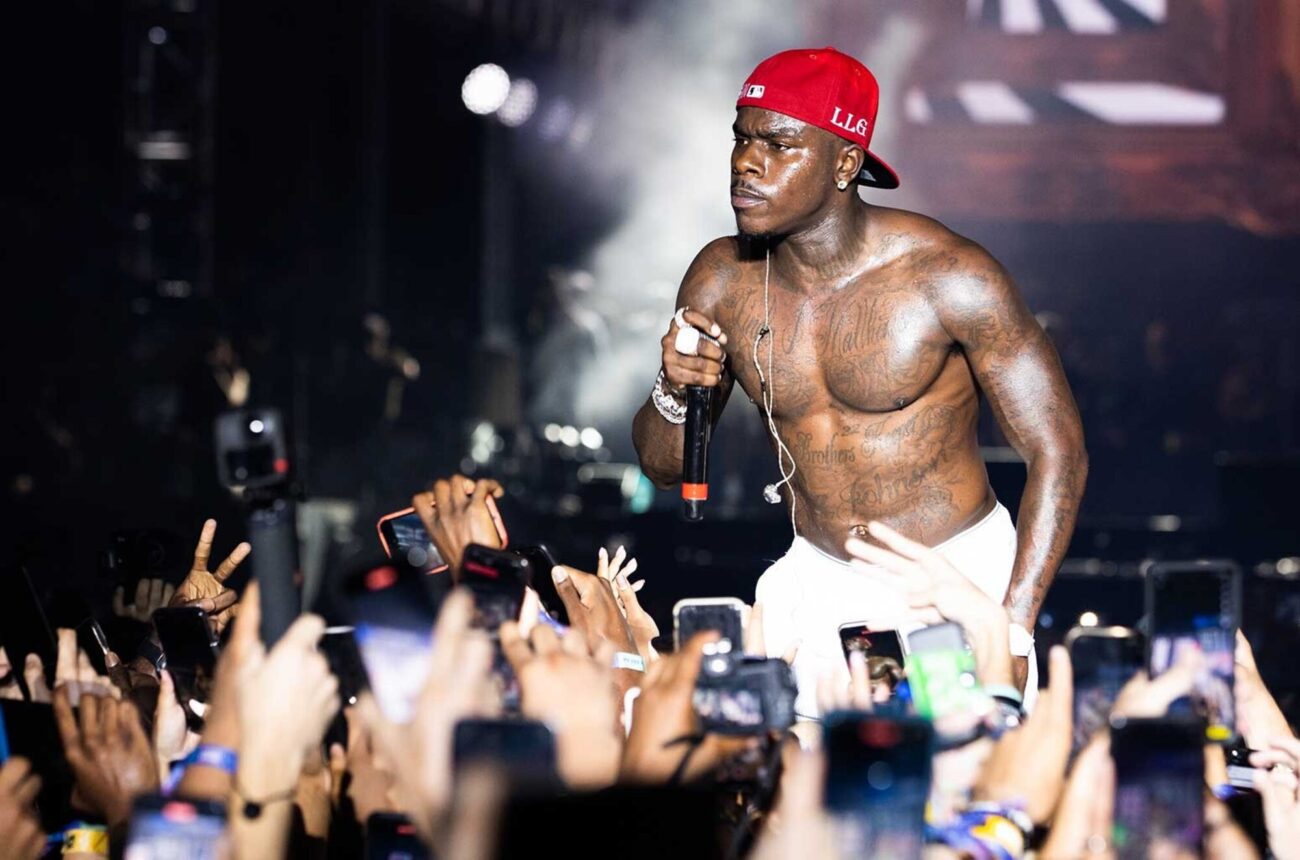 It seems like people have finally gotten sick of DaBaby and his songs. After the rapper made some incredibly offensive & homophobic comments during his set at the Rolling Loud Festival in Miami, Florida, the rapper has since received tons of valid backlash & criticism. After making quite an insensitive excuse of an apology, it seems that DaBaby has now made a second attempt at forgiveness. Let’s take a look at all the details here.

DaBaby went on a boomer style homophobic rant at Rolling Loud that was oddly specific pic.twitter.com/D47p64FaqO

Second round of apologies

We can all agree that it’s hard to enjoy DaBaby and his songs after the mess of a week he’s had. After he received backlash for his homophobic comments at Rolling Loud, the rapper first seemed dismissive and stubborn to admit all his faults. Now though, as more and more big artists are joining in to call him out and he’s beginning to lose brand deals and festival slots, it looks like he’s finally ready to make a more mature statement.

In his newest attempt at an apology, DaBaby wrote on Instagram on Monday: “Social media moves so fast that people want to demolish you before you even have the opportunity to grow, educate, and learn from your mistakes”.

“As a man who has had to make his own way from very difficult circumstances, having people I know publicly working against me — knowing that what I needed was education on these topics and guidance — has been challenging. I appreciate the many people who came to me with kindness, who reached out to me privately to offer wisdom, education, and resources. That’s what I needed and it was received”, he wrote. 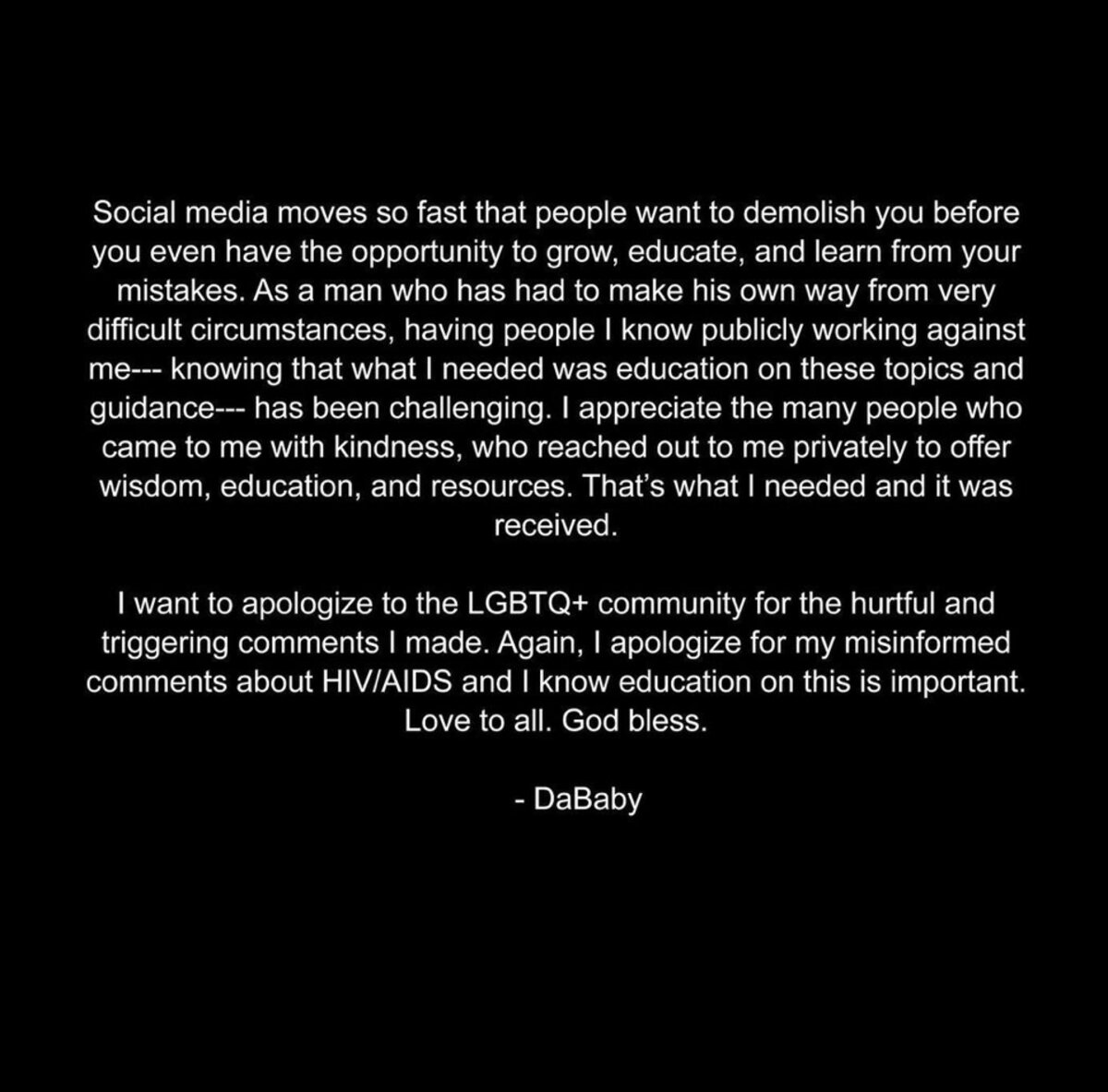 The rapper finished his statement with: “I want to apologize to the LGBTQ+ community for the hurtful and triggering comments I made … I know education on this is important. Love to all. God bless”.

I tell fans to put a cellphone light in the air y’all start a million man March.✊🏾

If you need a brief recap on the entire situation that has been going down this past week, the controversy all began at Rolling Loud in Miami, Florida last week. While DaBaby was on stage performing his songs, he decided to make some very offensive comments for seemingly no reason.

After the clip of him saying those homophobic comments went viral, he shared on Instagram Live: “My gay fans, they take care of themselves. They ain’t no nasty gay n*****s See what I’m saying? They ain’t no junkies in the street. The hell you talking about, n*****s? Then I said if you ain’t sucking d*** in the parking lot, put your cell phone lighter up”.

Anybody who done ever been effected by AIDS/HIV y’all got the right to be upset, what I said was insensitive even though I have no intentions on offending anybody. So my apologies 🙏🏾

“You know what my gay fans did? Put that motherf*****g light up, n***a, ‘cause my gay fans ain’t going for that. They got class. They ain’t sucking no d*** in no parking lot”, he added. He then proceeded to share more comments on Twitter, saying that people “digested” the statements “wrong”, and said: “But the LGBT community . . . I ain’t trippin on y’all, do you. y’all business is y’all business”.

Since then, big stars such as Dua Lipa, Questlove, Elton John, and more have called him out for his offensive statements. His performance at Lollapalooza this past weekend was cancelled, and it was reported on Monday that he was scrapped from the upcoming Governors Ball and Day N Vegas Festivals. It really seems like everyone is truly sick of DaBaby and his songs now after this past week.