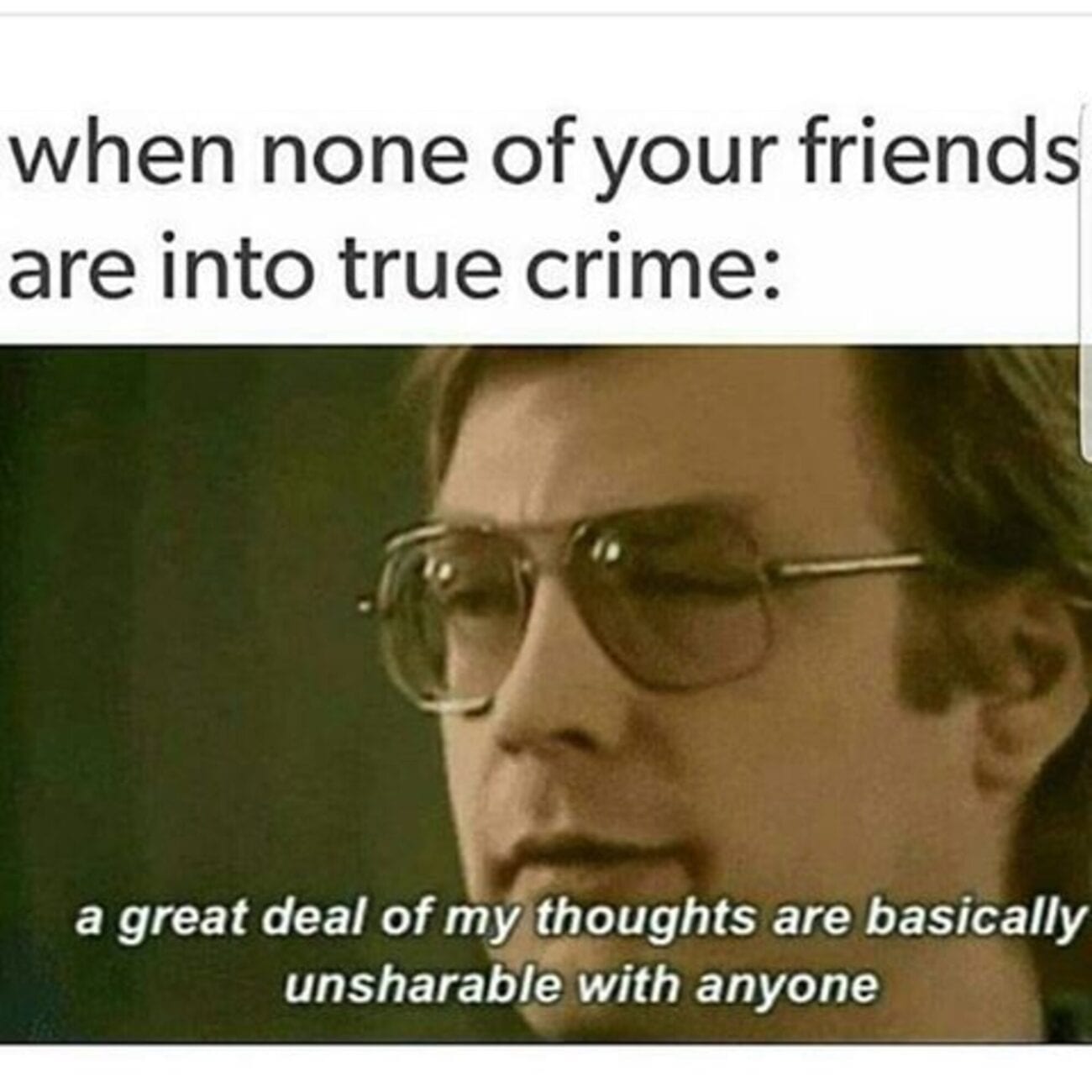 When will the cultural obsession of true crime come to an end? The answer: not any time soon. True crime documentaries & series seem to have a captivating power over audiences across the globe, as what seems like very few months a new true crime story dominates the entertainment landscape.

From September 2020’s American Murder: The Family Next Door to October 2020’s Seduced: Inside the NXIVM Cult, it seems there’s no signs of out fascination with true crime stopping in the near future.

Thanks to true crime’s massive appeal, it’s reached the highest level of global recognition: it has its own dank memes. We’ve collected our favorite true crime memes anyone can relate to; who doesn’t like a good true crime doc?

It seems like everyone’s into the latest true crime docuseries, and even our least edgy coworkers have something to say the latest viral series, PSL in hand. Wait a minute: is true crime basic?

Office conversation on true crime is the prime location to don out our brilliant crime theories all the investigators seemed to have missed. All the best ideas come when we watch an extra episode past bedtime.

What’s a meme format without Office Jim? This true crime meme captures the relief we feel when there’s something to talk about at the office.

Somehow true crime appeals to even our softest coworkers: this meme says it all.

For real true crime heads, warnings before true crime documentaries are laughable; we’ve been here before.

I'm only 4 episodes into my first show but analytics tells me most of my listeners are female. With the amount of true crime I listen to I'd just be a single cat lady forever. How do you filter out the the Buffalo Bills #truecrimememe #truecrime #podcast #meme #AskTwitter pic.twitter.com/huphNO5cB4

Not only are true crime documentaries entertaining, but they also often inform viewers as cautionary tales. This true crime meme is a reminder: daters beware.

True crime fans know Jeffrey Dahmer is the first lesson in true crime 101, and Twitter has no shortage of true crime memes for one of the most notorious serial killers of all time. Dahmer ate some of his victims back in the day (get it?).

The most accurate #truecrime #meme ever 🤣🤣 pic.twitter.com/dX8gD03Ord

This Dahmer Full House crossover meme shows us what a scene in Hell might look like. Say what you will about the content, but they definitely got the hair right.

these memes are fueled by carbs #truecrime pic.twitter.com/tBN3kj6o2y

Real true crime fans know about a lot more than top forty serial killer Jeffrey Dahmer, and some of Twitter’s true crime memes get down to specifics for the diehards. This one is for fans of the NXIVM docs, where cult victims were made to keep their weight down (couldn’t be us).

We leave you with this specific Casey Anthony true crime meme. When it comes to true crime, justice isn’t always served.