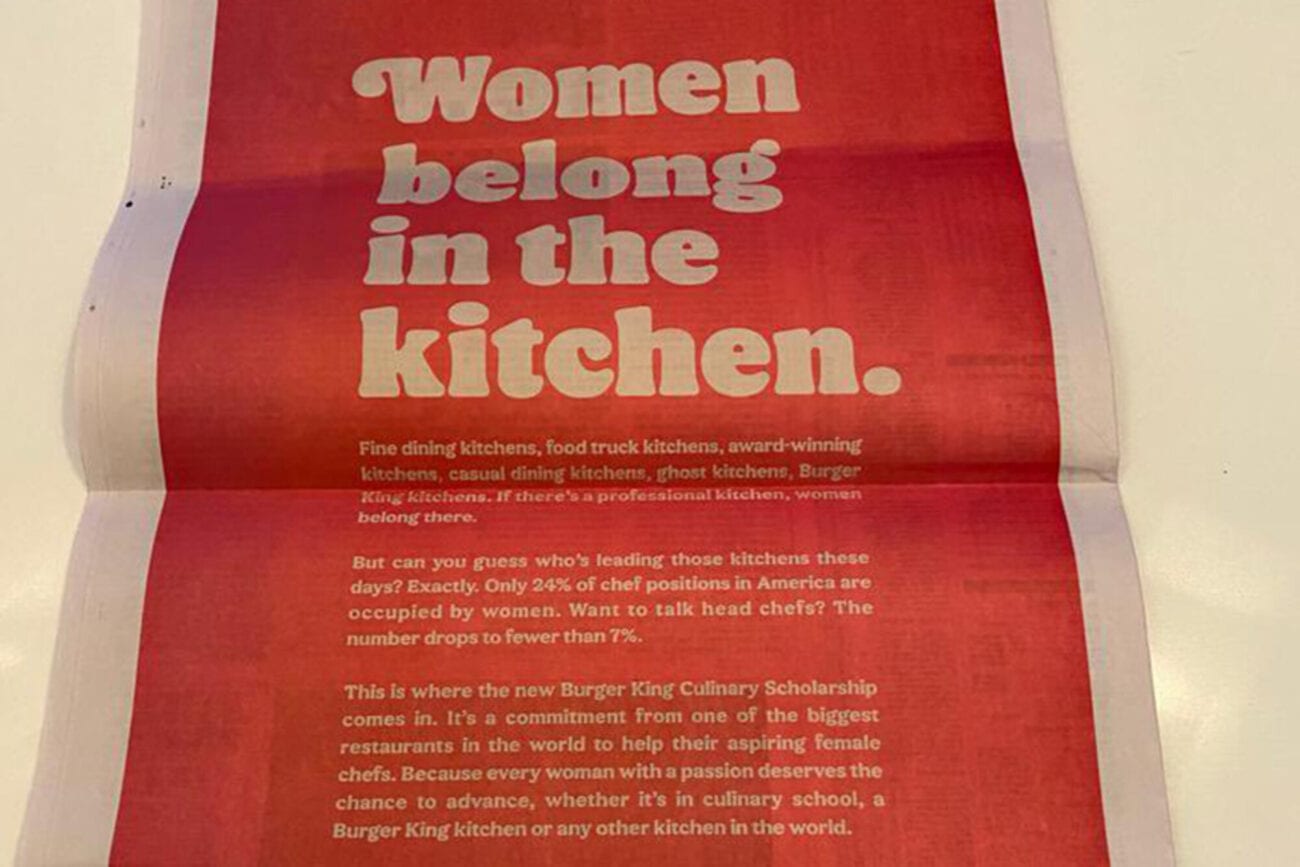 A Whopper of a mistake: Why Burger King’s tweet for women is awful

There are more than enough things on the internet that are sure to make you cringe, but you know what probably beats out all the rest in the competition of things that are sure to make you roll your eyes in disdain? It’s a tough choice, but we’d probably have to give the winning prize to tweets from large corporations trying unbelievably hard to keep up with modern events in an attempt to market their own businesses.

No matter how many eyes have been rolled though, it seems that these corporations just will not stop trying. We can’t say we haven’t warned them in the past, but hopefully this latest controversy over Burger King and a particularly special tweet they made in celebration of International Women’s Day might teach these corporations to just stick to what they know.

Women belong in the kitchen.

This very special situation happened when Burger King UK and their social media team decided to join in on the International Women’s Day fun by starting off their Twitter thread with a tweet that read solely one sentence: “Women belong in the kitchen”. Yes, we know. We really wish we were joking. Have we time travelled all the way back to the 1950s or something?

That statement wasn’t actually their main intent, as it was only written to grab the attention of more people so they could read more on what they had to say, but most folks thought it definitely was far from appropriate and was a big mistake from Burger King UK.

In the next tweet from their special thread for International Women’s Day, Burger King UK added: “If they want to, of course. Yet only 20% of chefs are women. We’re on a mission to change the gender ratio in the restaurant industry by empowering female employees with the opportunity to pursue a culinary career. #IWD”.

If they want to, of course. Yet only 20% of chefs are women. We're on a mission to change the gender ratio in the restaurant industry by empowering female employees with the opportunity to pursue a culinary career. #IWD

In the final tweet from the thread, the company finished with: “We are proud to be launching a new scholarship programme which will help female Burger King employees pursue their culinary dreams!”

Quite honestly, as the thread continued, Burger King showed that in their own special way, they were actually rooting for women’s rights and trying to subvert those stated stereotypes, but the damage to their company was already done.

Plenty of folks are now angry with this tweet, which comes off as misogynistic without the context, and we have to agree that there were far more better ways for the company to get their intended message across. And by far more better ways, we mean far, far, FAR more better ways to spread the message against sexism. I mean honestly, who is the person in charge of their social media marketing team?

Burger King when they see a woman pic.twitter.com/s33ir280sV

Of course, these special tweets by Burger King UK in honor of International Women’s Day were quick to go viral and become the talk of Twitter for its failed, offensive attempt to celebrate the day. Actress Chelsea Peretti even joined in on the criticism, replying to the original Burger King UK tweet with: “Burger King belongs in the trashcan”.

Twitter user @luvu2golka tweeted a screenshot of the Twitter thread and included the caption: “this is why you dont just hire anyone to run your brands social media lol”. Danny Deraney also tweeted: “I don’t know what is more offensive, using sexist bait to promote a good cause or a fast food chain using the word chef”.

Since then, the company has apologized, tweeting: “We hear you. We got our initial tweet wrong and we’re sorry. Our aim was to draw attention to the fact that only 20% of professional chefs in UK kitchens are women and to help change that by awarding culinary scholarships. We will do better next time.”