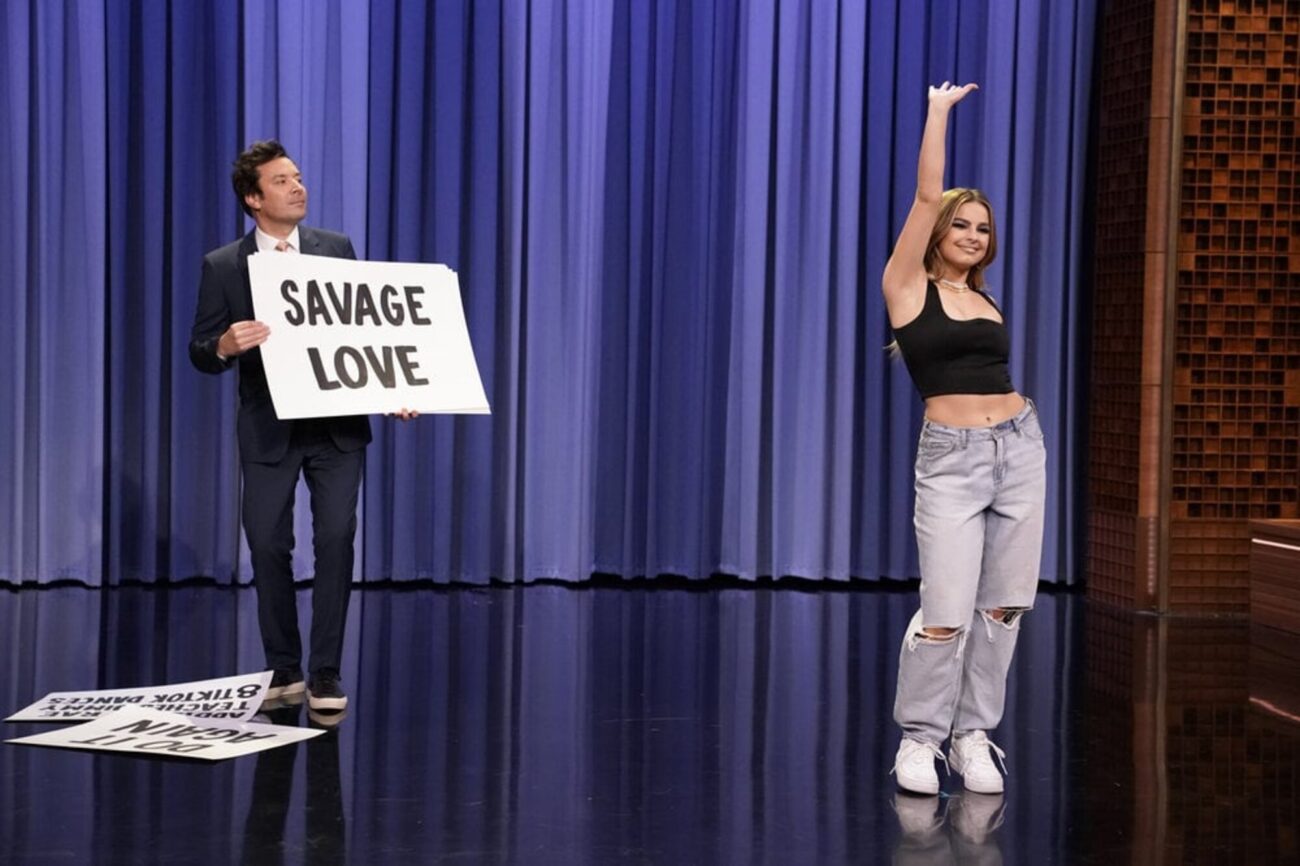 TikTok star Addison Rae on ‘The Tonight Show’: Why is Twitter upset?

TikTok is a social media app that launched hundreds of careers & opportunities for people, but are all of these careers actually well-deserved? Addison Rae, one of the biggest stars to come out of TikTok, has become a millionaire thanks to her dance videos that skyrocketed her fame & fortune and took her from an every-day teen girl to a Los Angeles celebrity within months.

However, after watching Friday’s episode of The Tonight Show where TikTok star Addison Rae performed several viral dances from the app, folks all over social media could not help but consider that the star has profited off of plenty of uncredited creators, those specifically being black TikTok creators. This controversy is not new and has been an ongoing conversation for a while. Find out why people are upset here.

The little segment shared between TikTok star Addison Rae & host Jimmy Fallon on The Tonight Show Saturday night was meant to be a fun moment to entertain Addison’s millions of fans, but it immediately backfired as Twitter users called out the star over the weekend for using the choreography of other creators for the segment that went uncredited on the show.

Before Jimmy Fallon joined Addison Rae for the short TikTok dance tutorial, the star performed her debut single “Obsessed” which came out earlier in March. As of now, the star is one of the social media app’s most popular influencers, with 78.9 million followers and growing. She and her counterpart Charlie D’Amelio, who has 111.5 million followers, are seen as the faces of Gen-Z social media stardom.

On the show, Rae expressed to Fallon: “It’s kind of hard to think about it, because I feel like the growth happened over the pandemic. Before the pandemic happened, I was going to events and stuff like that, but I’d only see probably 10,000 people – which was insane to me. . . .  So even just imagining 78 million . . . I don’t even feel like that’s a real number . . . I’m just having fun, so I don’t really think too much about it”.

Stealing from black entertainers and having white "creators" regurgitate it to the masses is american history 101.

What are people saying?

Because the career of Addison Rae literally relies on TikTok dance videos, it’s crucial to consider all of the people who have invented those dances she performs to her millions of followers who constantly go uncredited while Rae profits off of them. Since the video went viral, plenty of Twitter users have made it clear that they refuse to let those original creators go unnoticed.

@MusicConvos on Twitter tweeted: “Addison Rae on Fallon is a prime example of how mediocre and basic white girls talent have to be to get far meanwhile she build her whole brand off of stealing tick tok’s from black girls…let me know when y’all ready to talk about how the media pushes WHITE #AddisonRaeonFallon”.

Another user @fancycatxo wrote: “Stealing from black entertainers and having white ‘creators’ regurgitate it to the masses is american history 101”. “I think Black creators should just stop creating content for like a good 6 months and just observe what these people come up with”, Twitter user @Ariannnyy_ added.

If people are wanting to know the creators of each:

One Twitter user took the initiative to give credit where credit was due, and listed out all of the original creators who invented each TikTok dance that Addison Rae performed on the show. As of now, the representatives for both The Tonight Show and Addison Rae have failed to address the situation or respond to requests for comment on the matter.

This has been an ongoing conversation with white TikTok stars profiting off of dances created by black creators, and the backlash first began when people found out fifteen-year-old Jalaiah Harmon who created the first viral TikTok challenge “Renegade”, which helped make both D’Amelio & Rae famous, was uncredited for her work.

Harmon only received her deserved credit after the internet spoke out about this issue, and even danced with D’Amelio & Rae on TikTok, but still has not amassed as much fame or exposure as her white counterparts.