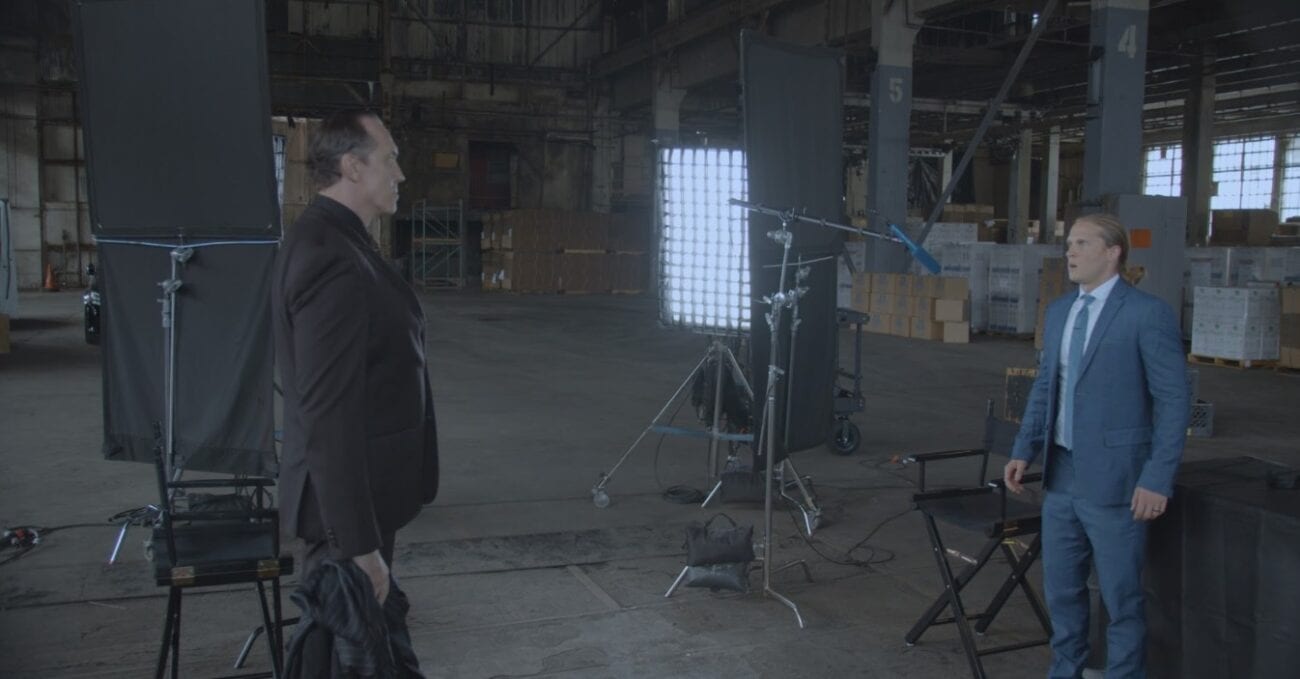 There are no bigger baddies than the Antichrist. He represents all that is impure and evil about the human race, and though you may believe in his existence, his trickery makes him impossible to identify. Director Timothy A. Chey decides to remove this trickery with his new film Interview with the Antichrist.

The film follows reporter Alex Carter (Aaron Groben) as he conducts an interview with the Antichrist (Ego Mikitas). The interview is broadcast worldwide, and the reporter is free to grill the Antichrist on many human tragedies, including 9/11, mass shootings, and death squads. The Antichrist’s are not quite what Carter expects, but they in turn lead to bigger questions about humanity and the current state of the world.

Interview with the Antichrist is as bold a concept as has been done on film, and director Chey manages to pull it off. The notion of sitting down for a cordial discussion with the spawn of Satan is such a profoundly compelling idea that it almost runs the risk of being underwhelming, but Chey keeps the tension high throughout the film. Much of it has to do with the fluidity of the dialogue.

Carter and the Antichrist swerve from one topic to another, some deathly serious and others somewhat humorous. They discuss the fallout of 9/11, but they also discuss the role that Rudolph the Red-Nosed Reindeer plays in distracting people from the true meaning of Christmas. This variety in topic keeps the film from being one-note, and constantly unpredictable.

Chey is a Harvard graduate and a notable faith-based director in the United States with over 15 film credits to his name. Some of his most notable titles, Freedom and Suing the Devil, saw him work with big name movie stars like Malcolm McDowell, Tom Sizemore, and Cuba Gooding, Jr. He works with less established names here, Groben and Mikitas, but he gets similarly compelling performances. Mikitas is especially memorable in a role that has been played by everyone from Al Pacino to Sam Niell.

Interview with the Antichrist feels especially timely given the current state of the world. This was not lost as Chey, who initially conceived of the film as a court case instead of an interview (Chey also studied at Boston University of Law). The questions that get lobbed at the Antichrist are questions that many have asked over the past few years, whether it be in regards to mass media or political corruption.

The film strikes a good balance of not telling you what to think but also not leaving its answers too vague to leave an impression. Instead, it compels you to look in the mirror and determine the answers for yourself. Chey said that his intention with the film was to bring awareness to the state of humanity in 2020.

“My one and only goal is to bring people true salvation in Christ in these very last days”, he explained. “The Lord is coming sooner than we think’. The film is also fundraising to support this message, raising $10 million in prints and advertising. We won’t spoil the ending or the fate of the world in the film, but we do recommend watching Interview with the Antichrist during your holiday break.

Interview with the Antichrist will be released December 21 on VOD.