Filmmaker Keith Bearden has taken on the coming-of-age genre with a surrealist twist in his new film Antarctica. He wrote and directed the film which stars Chloë Levine, Kimie Muroya, Clea Lewis, Damian Young, and Bubba Weiler.

The film is described as “Life-long friends Kat and Janet see everything flipped upside down as they hit senior year. Shy Kat is now popular, hooking up at parties, while misfit Janet is put on strange medication for her ‘bad behavior.’ Things get even odder when Janet meets a cute boy who might be a time traveler, and Kat’s panicked parents send her off to sex rehab. Can anything make life in the suburbs normal again?”

We had the chance to ask Bearden a few questions about his career as well as Antarctica. Here’s what we learned.

Can you tell us a little bit about Antarctica?

It’s a strange comedy with a little romance. A critic in France called it “a surrealistic fable about being a girl in normal-people America.” Two best friends, one’s getting more popular, one’s getting less popular, and their rough journeys as they go down those respective rabbit holes.

Where did the concept for Antarctica come from?

I spent years thinking about making a film about smart, funny teenage girls. Not the mean girls, or cheerleaders, or the typical outcasts. It was based on years of knowing amazing young women, whose personalities all stuck so strong with me. Then I broke my leg in 2014 and spent the summer unable to really do anything, and I wrote this script. It all vomited out of me in about 6 weeks. NYC streets are not kind to a person on crutches.

Can you tell us how Antarctica got its name?

Well, Antarctica is a barren place where almost nothing is alive, so I thought that was a good metaphor for small-town America when you’re a teen. Also, there’s a Men Without Hats song called “Antarctica” that I loved as a kid. The first lines are “The Ice Age is Here/And it’s Right in Your Town.” That kind of nailed it. (It’s not in the movie.)

Is there anything you want people to know before watching Antarctica or to think about while watching?

Answer 1) Play it loud on the biggest screen available.

Answer 2) We shot it in 20 days. Mary Poppins Returns was shot in 130 days. It’s hard to make a film at that pace. At one point, Clark Middleton who plays the History Teacher, told everyone there was a lot of stress on set, to which I smiled and said, “Mr. Middleton, we have an hour to film both your scenes.”

Answer 3) Unlike most movies, the two stars really liked each other, and are still very close friends today. 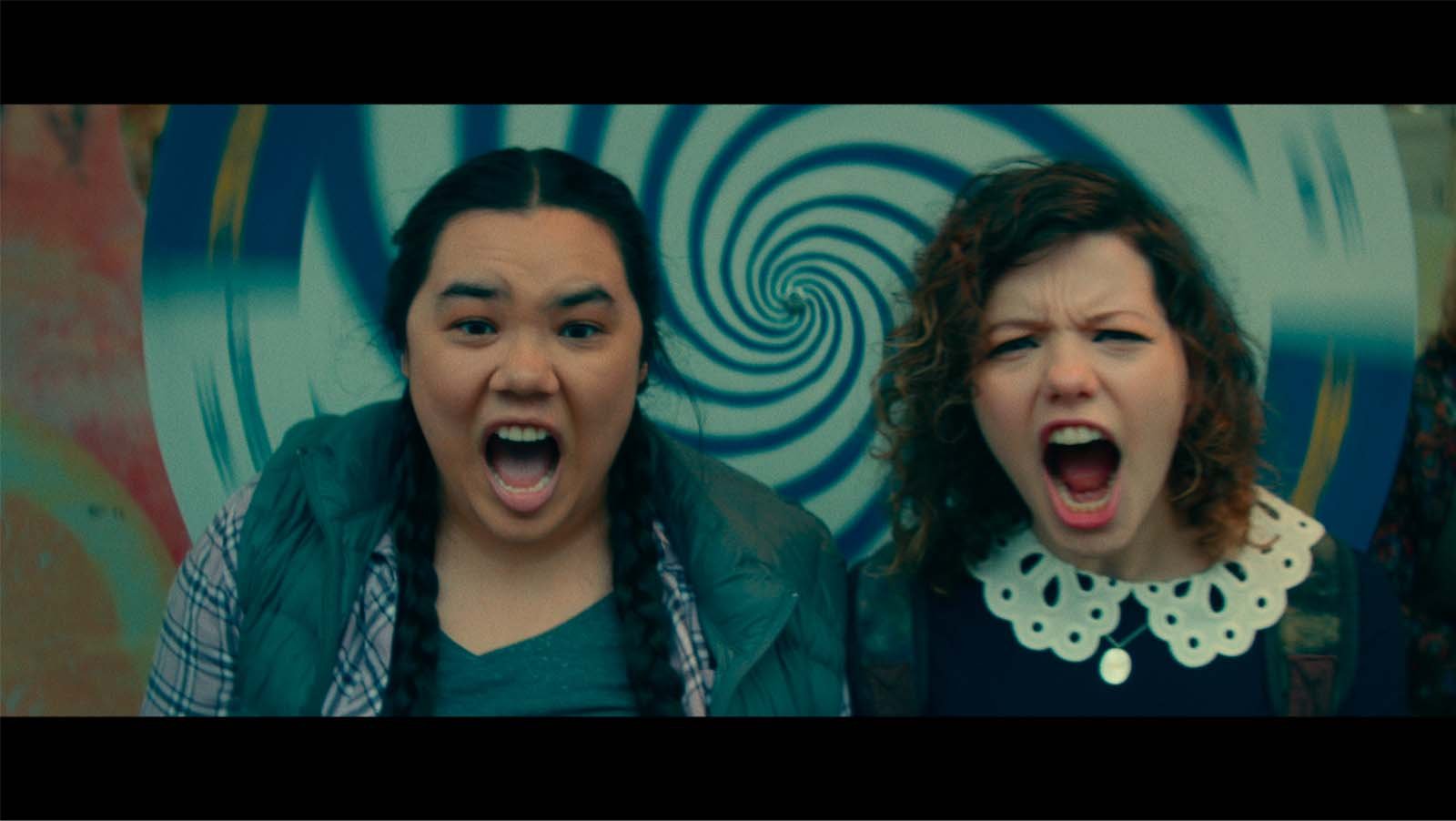 Antarctica seems like an original take on the coming-of-age genre, how did you decide to to take a somewhat surrealist approach to your story?

The surrealistic stuff comes naturally for me, but usually producers make me edit it out. On Antarctica they were very supportive and we kept it in.

My feeling about writing is [this]: take your experiences and observations and, to that, you add imagination. Otherwise, you’re just making a glorified home movie. Making it just about the realistic details also grounds it in 2020 – and 2020, like all years, will fade away. Also, movies are not plays—they are visual, and having interesting visual elements helps keep it cinematic and interesting. Surrealism or magical realism is visual.

Every film has its challenges, what was one of the challenges in making Antarctica?

The big challenge was getting a producer to commit to it. The script got a nice buzz around Hollywood, but people balked about it being “too dark” or the abortion content, or the Janet character being heavy and Asian-American. If I had changed those things, it wouldn’t have taken years to get it financed. One producer said, “I love these girls. If you can add a guy chasing them around with a knife, I’ll make it.” For real.

Shooting challenges were time, always. Spielberg said no matter how much money and time you have, you always leave your set wanting to have done more. We were under a tight schedule. Our crew was a bit green. All the night time scenes were about 31 degrees fahrenheit, and poor Chloë and Kimie are freezing. They were both troopers, and managed to have a lot of fun despite.

How did you get started in filmmaking?

I was very sick when I was 2 years old, and my dad made sure I had a TV while I was in the hospital recovering. I had never seen movies before. The original King Kong (and Godzilla!) were on and it blew my mind. I was hooked. Movies became my passion, cinemas my church. I started fooling around with Super 8 film when I was in high school, and I made short films in college, and started writing feature scripts.

I made short films in college that I was too shy to show to anyone, and years later when I did they won awards. I wrote a lot of scripts that never got read, then me and 5 friends made a short film called The Raftman’s Razor that went to Sundance and won tons of awards. From that I got my first feature Meet Monica Velour, starring Kim Cattrall, and a strange career directing commercials in France, a country in which I don’t speak the language. 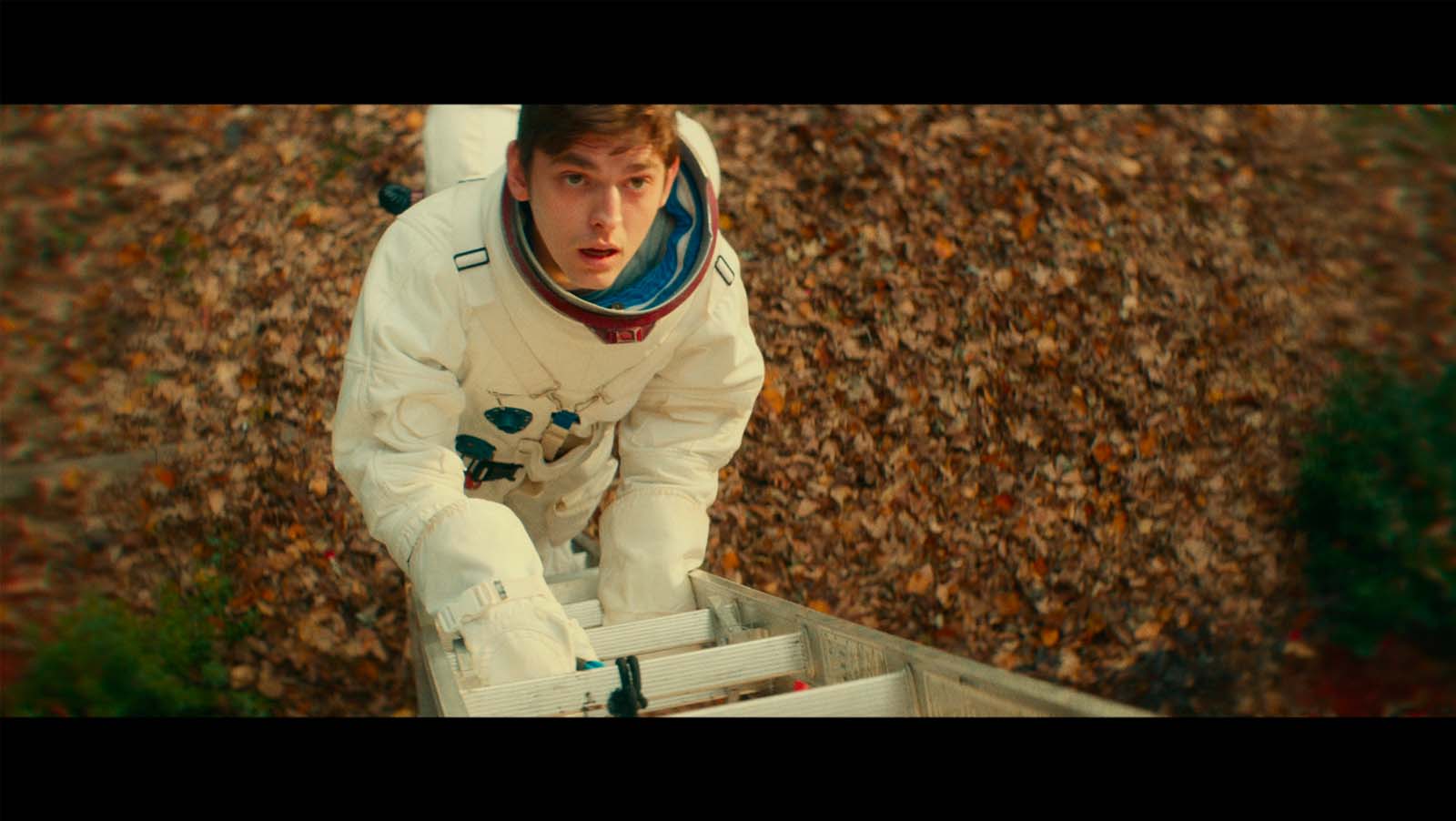 Could you describe your creative process for us?

Staring into space, writing notes on napkins or paper I fish out of the garbage. Writing. Writing something else, going back to the first script. Editing and re-writing endlessly. Finding images on the web or in books to share with key crews. Laughably bad hand-drawn storyboards stuck up on a set wall. More staring into space. Laughing on set hopefully.

With actors it’s a lot of discussion about backstory, feelings, how their characters deal with things, using their body/posture and costume to help find the characters. Making them comfortable during the day, editing the sides if need be with them…Actors are my jam. I think most people in the audience only really care about story and performance. Everything else is gravy.

It’s stressful but I have to do it. The director’s job is to create the world the characters live in, and for the audience to immerse themselves in. My mind is full of the details of that world long before we start shooting.

I bought dresses for Chloë Levine’s character before we were even fully green-lit. I choose all the songs they hear in the nursing home, and work very closely with the score composer, even down to what instruments he uses. When I don’t involve myself in those different parts of the process, the film doesn’t come out as interesting to me, so I have to or do it.

What part of filmmaking is your favorite?

The writing because I don’t have to get up early and I can do it in my jammies.

A woman I met at a film festival in Europe said my films are “anti-authoritarian,” which I guess I agree with. I see my films as ‘counter-programming.’ That’s because almost everything I see in the movies today is disengaged from the reality that I see and experience. Most of the types of real people and situations that fascinate me don’t show up in movies.

Also, stylistically, I admire filmmakers who have a voice, in that you can recognize their signature on a film without seeing the credits. Fellini, Tarantino, Ken Russell, Altman, Wes Anderson – they all have that. Most films now look like they are directed by the same 5 people. I hate that. Whether you like my films or not, they have a voice. I know that because once in a meeting, a big studio executive told me I did. And her saying that I knew I wouldn’t be getting the job!

I’ve tried making films normal but I can only make them my way! 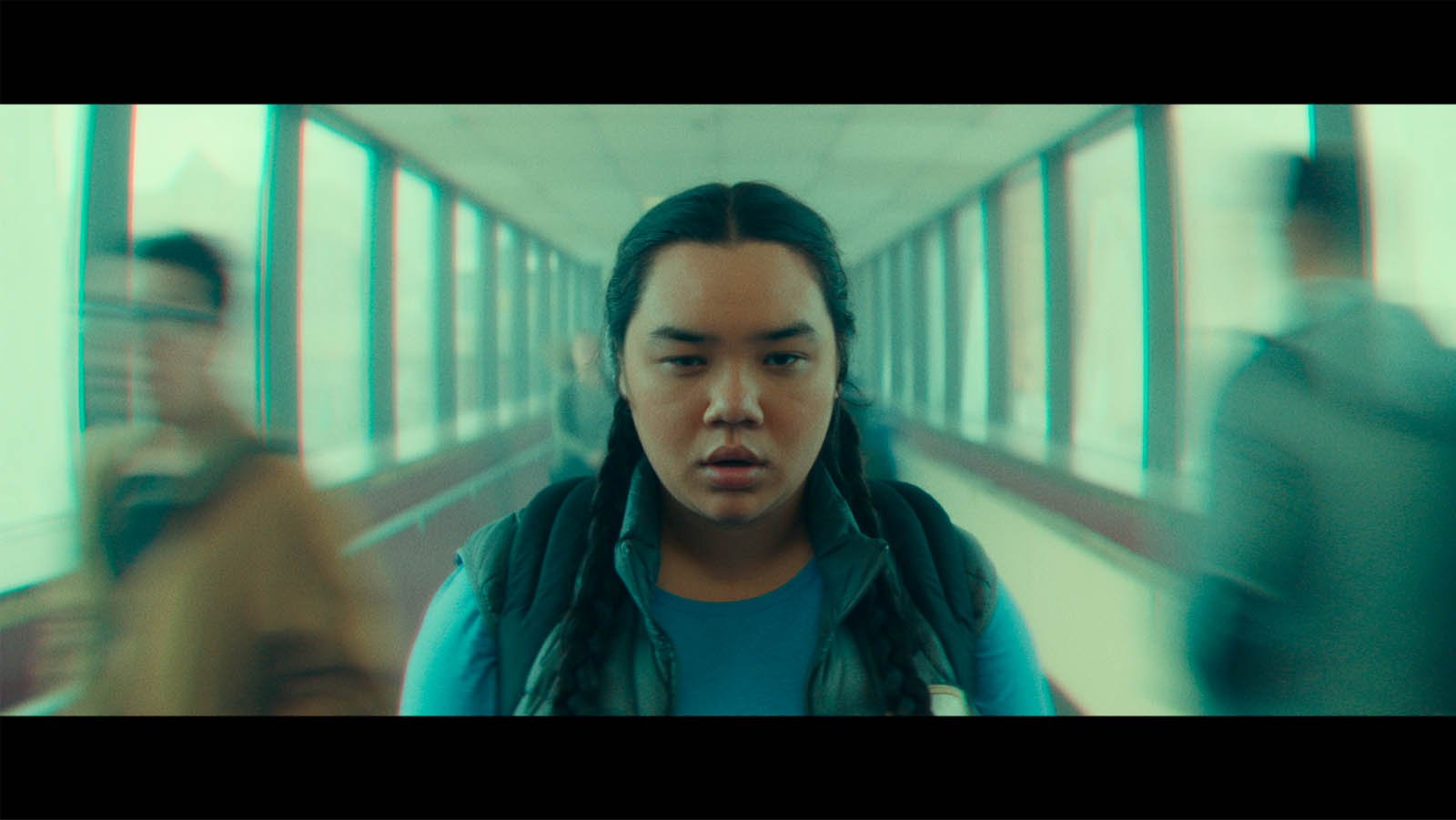 Long walks or bike rides are good for inspiration. Talking to people – strangers especially – hearing their stories, listening to the news, feeling what’s happening in people’s lives or the world. Then let it simmer.

What’s your favorite music to listen to while you’re working?

I always have a playlist for the film, or for characters, very early on in the writing process. My new script is about about a space mercenary, kind of a female Han Solo, and I listened to high energy stuff – DEVO, Iggy Pop, ZZ Top, Suzi Quatro while writing it.

I have a kind of Barbarella for the 21st century script called Shaina that people seem to really like. A female Han Solo type gets an unexpected shot at redemption while crash landed in the middle of warring tribes on a desert planet. Funny, action, spaceships, heart. I want to talk to Awkwafina about starring. She’s wonderful and ready for the leap.

So many I love, but I watch George Romero’s Dawn of the Dead a lot. I learned the beauty of  communal/collaborative filmmaking (his crew show up as actors or in other crew roles), how you can mix politics and social commentary in and not kill the entertainment value, and how shooting outside of the typical backlots or designated filmmaking areas gives your film a special something that has an indelible power. 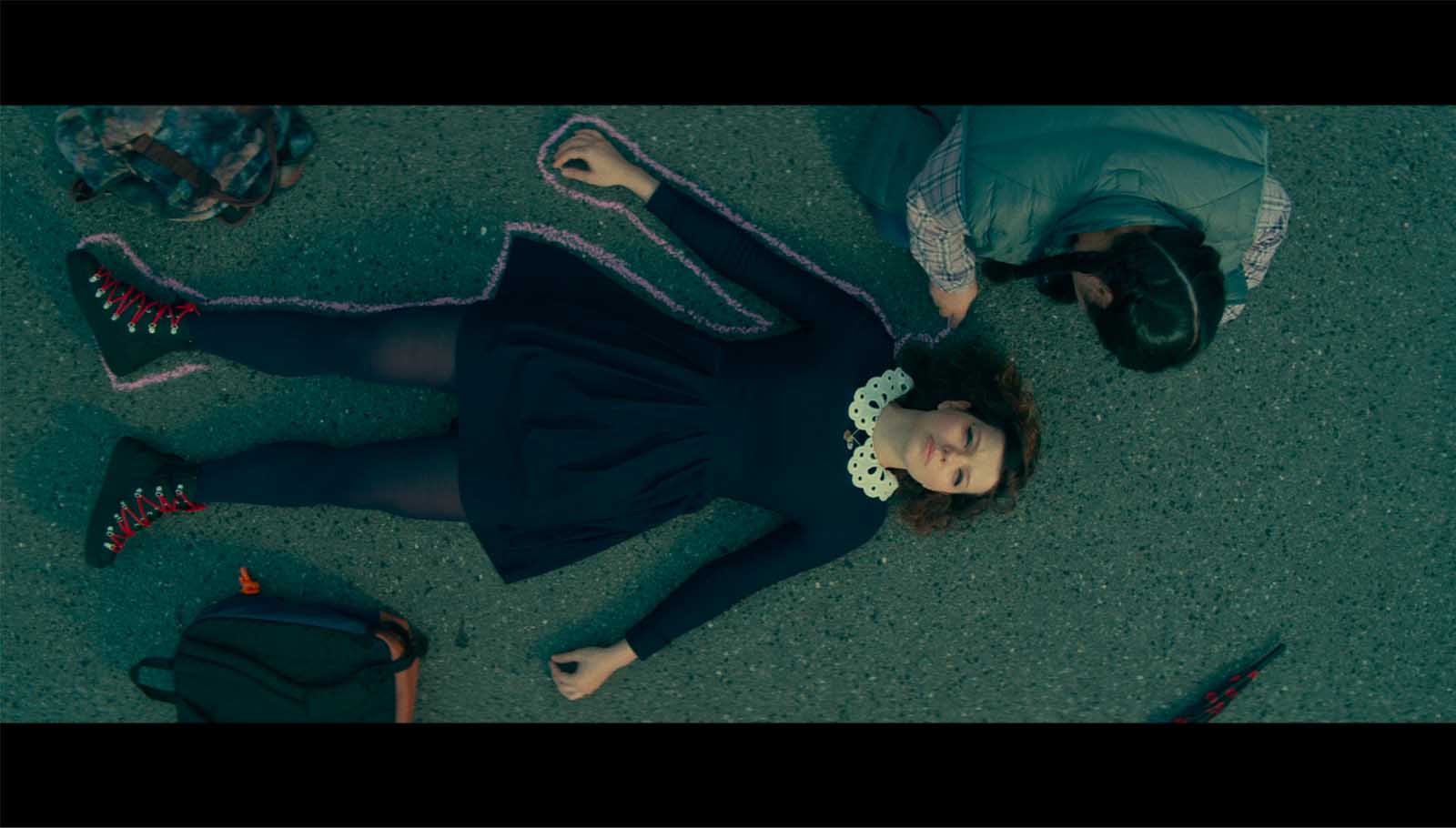 Do you have any tips for people looking to get into filmmaking?

DON’T DO IT! Be a doctor or something. It’s a crappy business. But if that doesn’t deter you, remember the most personal is the most universal. Make films that only YOU can make. There’s too many of the other kind of films and you’ll get lost in the shuffle. People have more money and bigger stars than you. Like a singer, find your range. Also, think about what you have to say that’s fresh or needed. Don’t just make retreads of your favorite films. Those films already exist.

2 more films in 5 years? Is that too much to ask, Ye Gods of Cinema?

Dogs give you an unrealistic amount of devotion, eat from the litter box, and chew out the crotches of expensive ladies underwear. Cats are aloof, untamable, frustrating, but fascinating and beautiful – like life itself. So, cats. 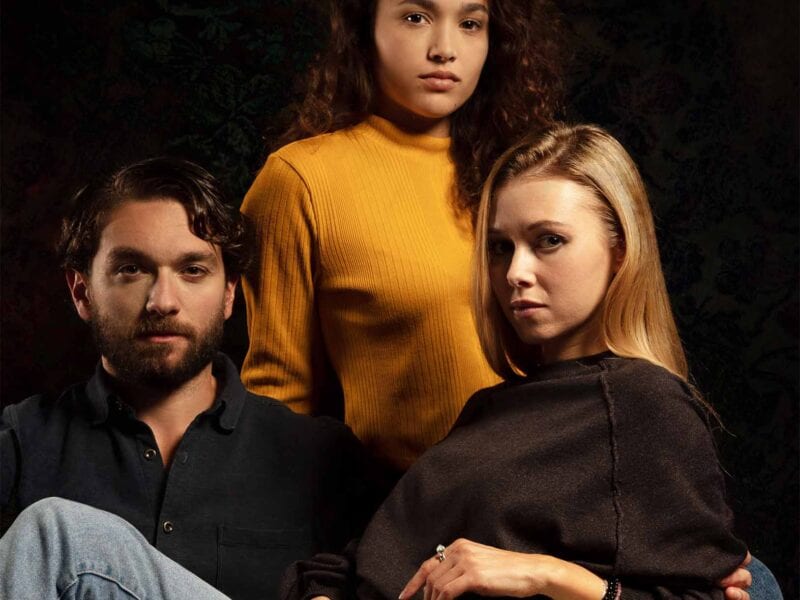 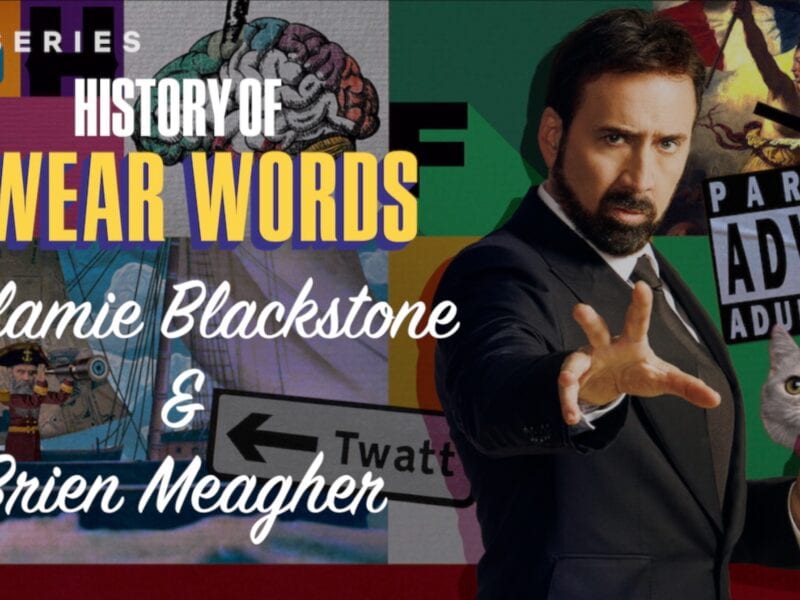